Recurrence after surgery in patients with NSCLC

The superiority of surgery, and its Achilles’ heel

Lung cancer has been the most common type of cancer in the world for several decades (1). Surgery remains the only potentially curative treatment for early-stage non-small cell lung cancer (NSCLC) patients, and complete resection can be achieved in a matter of hours and tissue availability is made possible (2). These points are advantages of surgery that are not associated with other modalities, such as chemotherapy and radiotherapy. In fact, many patients with NSCLC have been cured by surgery. However, there are also many cases that fail to achieve a cure following surgery. In fact, 30% to 55% of patients with NSCLC develop recurrence and die of their disease despite curative resection (3-5). Therefore, many patients eventually die of their disease due to recurrence after surgery (6,7). Furthermore, surgery itself possesses a certain amount of risk (8,9). Although treatment-related death is relatively uncommon, there is still a significant risk of mortality, and most patients experience a decrease in lung function after surgery. Thus, despite the advances in surgery, treatment by surgical resection is less than perfect, even when a complete resection is possible.

Reasons for recurrence after complete resection

The resection of early stage NSCLC offers patients the best hope of a cure, however, the recurrence rates post-resection remain high. There have been numerous studies conducted to determine why recurrence develops after complete resection for patients with NSCLC. These studies have shown that, right from the start, complete removal needs to be ensured both macroscopically and microscopically. It has been suggested that there are often occult micro-metastatic cancer cells, which are undetected by standard staging methods, such as modern diagnostic imaging, already present systemically at the time of surgery, suggesting that there is an underestimation of the true tumor stage. Second, handling of the tumor during surgery itself might lead to the dissemination of cancer cells (10,11). Based on former speculation, reports regarding disseminated tumor cells (DTC) or circulating tumor cells (CTC) have been described (12-14). A number of studies have reported an association between the presence of DTC or CTC during tumor resection and the patient outcome (12). However, some controversy exists regarding this theory (15). Therefore, the detection of DTC or CTC is currently not included in the NSCLC staging or treatment recommendations, and it is also currently unclear whether these cells have proliferative activity or are so-called “dormant cells” (16).

The timing and pattern of recurrence

Conventionally, recurrence most commonly occurs at distant sites (6,17). On the other hand, there was a report concerning the underestimation of the frequency of local recurrence. In that study, Boyd et al. examined the timing of local and distant failure of 250 patients who developed recurrent among 975 patients who underwent surgery (18). Seventeen percent, 44% and 39% of the recurrences were confined to local, distant and both sites, respectively. Only 0.6% of the patients developed a sequential local recurrence, suggesting that the crude rate of local failure might be underestimated if only the first sites of failure are reported. Distant metastases and local recurrence might arise from occult cancer cells or due to dissemination during surgery, respectively, as described above.

The identification of factors related to recurrence following surgery

The TNM staging indicates the level of disease progression and the malignant potential of the primary lung cancer (19). However, even patients with disease at the same stage exhibit wide variations in their incidence of recurrence after curative resection. Therefore, the current TNM staging system, which is based on clinical and pathological findings, may have reached the limit of its usefulness (20). Accurately predicting the cases in which disease is likely to recur can help guide the administration of adjuvant therapies, not only to those most likely to benefit from them (21,22), but also to those eligible for complete resection, because surgery itself possesses a certain amount of risk (8,9). There are two methods for identifying factors related to recurrence following surgery (Table 1). 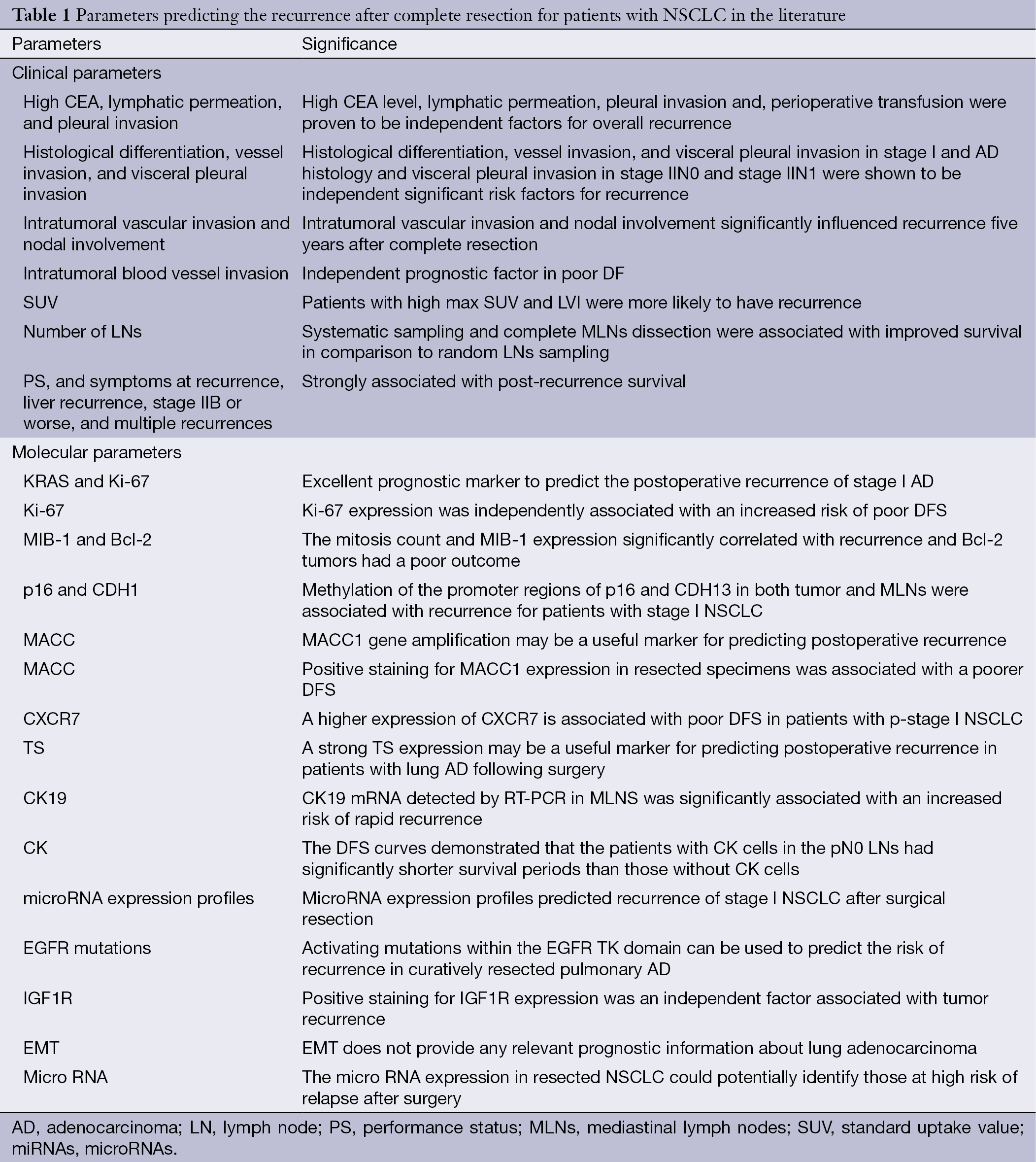 One is classical judgment using clinical parameters, in addition to the TNM classification. Tumor markers, such as CEA, were proven to be independent factors predicting the risk of recurrence (23). Furthermore, the physical examination is very important, because a lower performance status (PS) and the presence of symptoms are unfavorable prognostic factors for the disease free survival (DFS) (24). The standard uptake value (SUV) in PET has also been reported to be a significant independent factor predicting the DFS (25). An extensive pathological investigation is also important, because the histological differentiation, vessel invasion, lymphatic permeation and pleural invasion have all been reported to be poor prognostic factors for the DFS (26-28). Furthermore, complete mediastinal lymph node (MLN) dissection is associated with improved survival in comparison to random lymph node sampling for the patients with stage I NSCLC (29), although there have been some negative reports (30).

The other method for predicting recurrence uses molecular biological techniques. Lung cancer is a highly aggressive neoplastic disease that includes different histological subtypes with distinct clinicopathological and molecular features (6,7). Therefore, the establishment of useful markers is necessary to accurately classify early- and advanced-stage disease. The combined use of the KRAS status and the Ki-67 expression level was an excellent prognostic marker to predict the postoperative recurrence of stage I adenocarcinoma (31). The clinical usefulness of Ki-67, MACC, TS or IGF1R, but not PCNA or the EMT status, in primary lung adenocarcinoma has been reported (17,32-36). Poleri et al. showed that MIB-1 and Bcl-2 are independent prognostic factors for recurrence in stage IB patients (37). Brock et al. reported that methylation of the promoter regions of p16 and CDH13 in both the tumor and MLNs are associated with recurrence for patients with stage I NSCLC (38). An assessment of the combination of the several protein expression indicated that the cyclin E-negative/p27-positive group or higher expression of CXCR7 had a significantly higher DFS rate than did other groups (39,40). Many other markers have been reported (41-44). On the other hand, there have been some negative findings (45-48). Pastorino et al. reported that none of the immunocytochemical markers such as laminin receptor; EGFR, c-erbB2/Neu, BCl2, and p53, emerged as an independent predictive factor for survival (48).

Several attempts have been made to detect micrometastatic tumor cells or DTC in lymph nodes (LNs), bone marrow, and CTC in the peripheral blood (49,50). The DFS curves demonstrated that patients with cytokeratin (CK) cells in the pN0 LNs had significantly shorter survival periods than those without CK cells (51). CK19 mRNA in MLNs is significantly associated with an increased risk of rapid recurrence (52), which is consistent with our recent data (6). However, in contrast to the previously published data, Poncelet et al. described that the presence of occult micrometastasis had no influence on the DFS (53). A study by Hsu et al. also showed that the occurrence of bone marrow microinvolvement is not a good predictor of the long-term prognosis (54).

The development of the microarray analyses has made it possible to simultaneously measure the expression levels of thousands of genes (20,55-57). Tumor-specific genetic fingerprints/gene signatures can affect the prognosis (58). The deregulation of microRNAs is also linked to cancer initiation and progression, indicating that microRNAs may act as tumor suppressor genes or oncogenes (20). In fact, the microRNA expression in resected NSCLC could potentially identify those at high risk of relapse after surgery (59). Despite these findings, it is still a challenge to assign a prognostic value to such molecular pathways because of the poor reproducibility of findings (60). The biomarker might have more clinical relevance if its impact on the response to chemotherapy could be predicted at the same time. Despite a great deal of an effort to identify of factors related to recurrence following surgery, there is currently no consensus concerning the use of biomarkers to predict NSCLC recurrence. Therefore, clinical trials to investigate predictive factors with recurrence as one of the endpoints are needed.

Another strategy is the addition of thoracic radiotherapy to chemotherapy in the preoperative setting, which may improve the local control and help sterilize mediastinal disease. However, the North American Intergroup Trial group and German Lung Cancer Cooperative Group, and a Swiss group, did not find superior survival in the patients assigned to the thoracic radiotherapy plus chemotherapy group (68-70). Therefore, there is currently no clear evidence favoring a neoadjuvant strategy compared with adjuvant strategies for early-stage NSCLC (61).

On the other hand, there is lot of evidence supporting postoperative adjuvant chemotherapy. The Lung Adjuvant Cisplatin Evaluation (LACE) meta-analysis clearly demonstrated a trend toward a benefit in stage IB NSCLC and clear benefit for patients with stage II N1 and IIIA (mostly N2 cases) patients, with an average benefit of 5% at five years (71). Consequently, adjuvant chemotherapy is recommended for patients with resected stage II-III NSCLC (72). However, chemotherapy compliance in the post-surgery setting is relatively poor (22). Nevertheless, the combined hazard ratios (HR) from this meta-analysis suggested that the estimated benefit from preoperative chemotherapy was similar in magnitude to that expected with postoperative chemotherapy, in spite of the large difference in compliance (62,73).

For patients with early-stage NSCLC, surgery remains the treatment of choice, as described above. At present, stereotactic body radiation therapy (SBRT) has been shown to provide a benefit for patients who are not fit for surgery or those who refuse surgery (74). However, the quality of the instruments used to deliver radiation therapy has improved dramatically. SBRT has emerged as a new treatment modality to completely eradicate the primary tumor. Excellent outcomes from SBRT, including good long-term survival, and favorable comparisons to groups of patients treated with standard surgery have been reported (75). However, these reports were retrospective. The head-to-head comparison of SBRT versus surgery for operable patients seems to be very difficult to conduct from the standpoint of the recruiting, decisions regarding the endpoints, stage migration and tissue availability. In fact, such trials have already closed due to a lack of accrual (76,77). This subject will need to be examined in the future. On the other hand, for locally-advanced disease, the impact of neoadjuvant therapy followed by surgery has failed to show a survival benefit (78-81). Therefore, surgical resection is the best treatment option at present. However, patients with clinical stage IIIA-N2 NSCLC who underwent neoadjuvant chemoradiotherapy followed by lobectomy, were found to have an improved survival based on the data from the American College of Surgeons Commission on Cancer (82). Moreover, a histopathological assessment of resected specimens after neoadjuvant chemotherapy could potentially have a role, in addition to evaluating the response to chemotherapy (83). This patient selection is important for induction treatment before surgery to improve the outcome. Recent developments in molecularly-targeted drugs have transformed cancer therapy in remarkable ways. A multicenter phase II randomized study of customized neoadjuvant therapy versus standard chemotherapy has been open for accrual. Patients will be randomized to receive either standard chemotherapy or customized therapy before resection using predetermined values for ERCC1, RRM1, TS and EGFR mutations (84). The West Japan Oncology Group has already launched a randomized phase III trial comparing adjuvant gefitinib with chemotherapy in patients with completely resected stage II-III NSCLC harboring EGFR mutations (85). Further studies with targeted therapy before and after surgery are warranted.

The standard treatment for early-stage NSCLC patients is still surgery. Surgery is also of use, because it provides tissue specimens to evaluate, so that an appropriate treatment can be defined based on the accurate evaluation of the tumor, biologically. A better individualization of treatment approaches requires a more precise understanding of the molecular features of lung cancer (5). However, there are some real limitations to surgery, as pointed out above. Additional studies are needed to reduce the incidence of recurrence after surgery and to perform more accurate patient selection to ensure a radical cure.

This study was supported, in part, by a Grant-in-Aid for Scientific Research (C) 25462202 from the Ministry of Education, Culture, Sports, Science and Technology (MEXT), Japan and a UOEH Research Grant for Promotion of Occupational Health