Chinese investigators have become increasingly active in lung cancer research in recent years. The Chinese Thoracic Oncology Group (CTONG) was established in 2007 with the purpose of designing and developing multi-center clinical trials to provide high-level evidence for lung cancer treatment in China. CTONG has launched 30 clinical trials that have contributed to or will contribute to establishing treatments for lung cancer patients. The ongoing trials are summarized in Table 1. 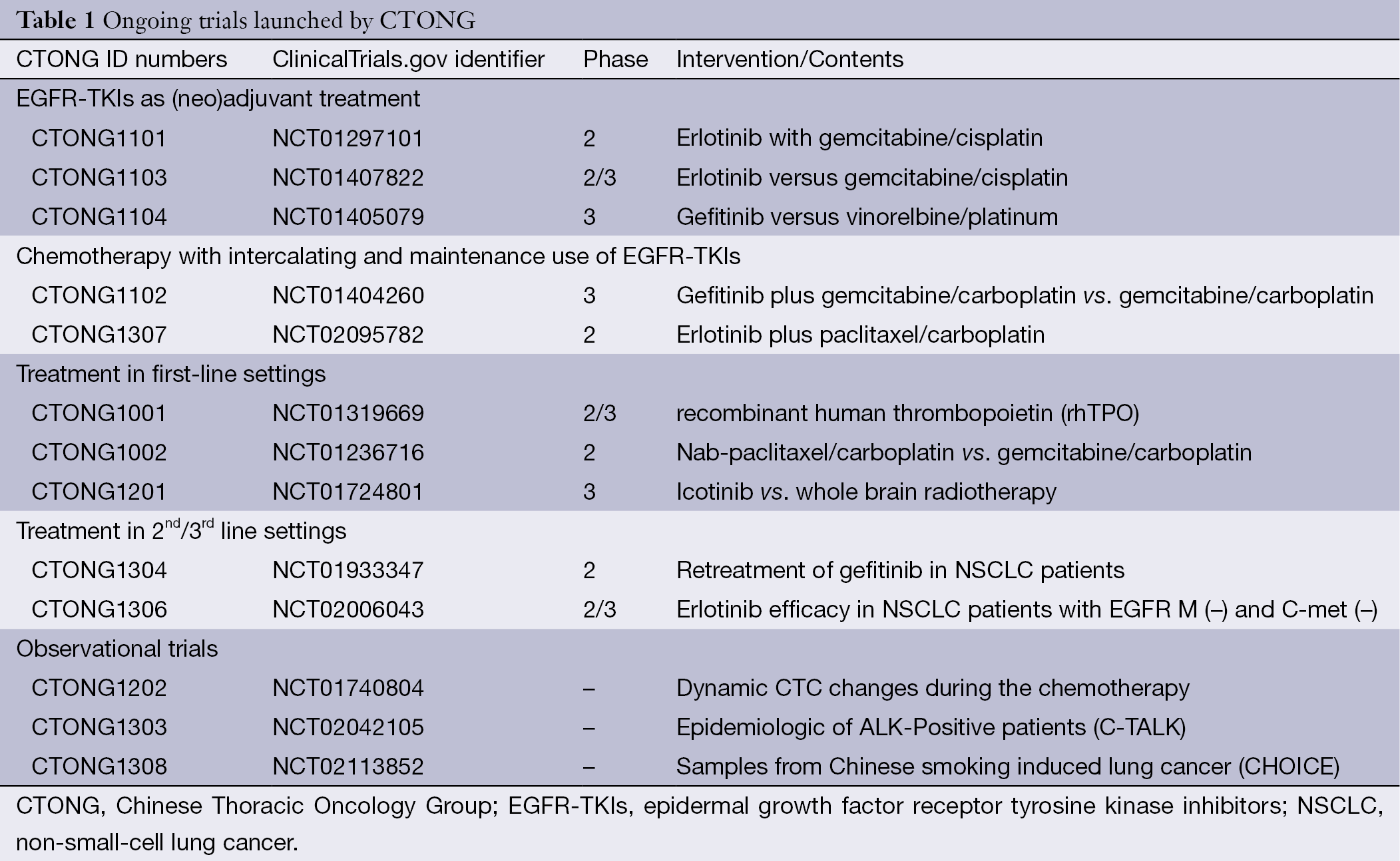 Trials in a first-line settings

The IRESSA Pan-Asia Study (IPASS) enrolled patients in East Asia with advanced pulmonary adenocarcinoma who were nonsmokers or former light smokers to receive gefitinib or carboplatin plus paclitaxel (1). The trial showed that gefitinib was superior to carboplatin–paclitaxel in selected patients [hazard ratio (HR) for progression or death, 0.74; P<0.001] and the epidermal growth factor receptor (EGFR) mutation was a strong predictor of a better outcome with gefitinib.

FASTACT-2 (CTONG 0902) enrolled NSCLC patients with stage IIIB/IV disease and randomized them to receive gemcitabine plus platinum (GP) with intercalated erlotinib or placebo (3). The primary endpoint of PFS in the overall population was significantly longer for the chemotherapy plus erlotinib group than the chemotherapy plus placebo group (median PFS 7.6 vs. 6.0 months; P<0.0001). Treatment benefit was seen only in patients with an activating EGFR gene mutation (median PFS 16.8 vs. 6.9 months; P<0.0001; median overall survival (OS) 31.4 vs. 20.6 months; P=0.0092). The results suggested that intercalated chemotherapy and erlotinib is a viable first-line option for NSCLC patients with EGFR-mutation-positive disease or selected patients with unknown EGFR mutation status.

LUX-Lung 6 is an international, phase III trial. Patients with an EGFR activating mutation were randomized to receive gemcitabine and carboplatin (GC) or afatinib (4). The primary endpoint, PFS, was significantly longer in the afatinib group than in the GC group (median 11.0 vs. 5.6 months; P<0.0001). The investigators suggested that afatinib be considered as a first-line treatment in patients with an EGFR activating mutation.

The BEYOND (NCT01364012) (5) study recruited advanced non-squamous NSCLC patients in China. They were randomized to receive carboplatin/paclitaxel plus bevacizumab or placebo. The primary endpoint, PFS, was prolonged in the carboplatin/paclitaxel plus bevacizumab arm (median 9.2 vs. 6.5 months; P<0.0001). The results indicated that Chinese patients benefited from the combination of bevacizumab and platinum-based chemotherapy.

Chinese patients with stage IIIB/IV non-squamous NSCLC were enrolled in JMIL and assigned randomly to receive pemetrexed plus cisplatin (PC) or GC (6). The primary endpoint was to compare the OS in the combined dataset, consisting of Chinese patients in JMIL and 1,252 non-squamous patients in JMDB. The results showed that PC was superior to GC in terms of prolonging the OS in the combined dataset (median OS 11.76 vs. 10.94 months; P=0.023). Consequently, the investigators suggested that PC be considered as first-line treatment in Chinese non-squamous NSCLC patients.

INFORM (CTONG 0804, NCT00770588) enrolled patients from East Asia with advanced NSCLC who had not experienced disease progression or unacceptable toxicity during first-line standard platinum-based chemotherapy to receive gefitinib as maintenance (7). The primary endpoint PFS was significantly longer with gefitinib than with placebo (median PFS 4.8 vs. 2.6 months; HR 0.42; P<0.0001). It was suggested that clinicians consider maintenance treatment with gefitinib.

Trials in a second-line settings

The JMID (NCT00391274) study enrolled NSCLC patients who had prior chemotherapy and were randomized to receive single-agent pemetrexed or docetaxel until progressive disease or unacceptable toxicity developed or a patient/investigator decision was made (8). The primary endpoint of OS non-inferiority of pemetrexed to docetaxel was not met. The median OS was 11.7 and 12.2 months for the pemetrexed and docetaxel arms, respectively (P=0.492). Patients treated with pemetrexed had significantly fewer drug-related grade 3-4 adverse events (pemetrexed 20.8%, docetaxel 40.2%; P=0.003). Given the comparable efficacy and superior tolerability of pemetrexed, the investigators supported the use of single-agent, second-line pemetrexed for advanced non-squamous NSCLC in Chinese patients.

CTONG 0803 recruited patients with adenocarcinoma or an activating EGFR mutation and asymptomatic brain metastases (BM) without extracranial progressive disease after first-line platinum-doublet chemotherapy (9). The enrolled patients were given erlotinib. The median PFS was 10.1 months for intracranial progression and 9.7 months for intracranial and systemic progression. The trial suggested that single-agent erlotinib was active and well tolerated in NSCLC patients with BM.

CTONG 0806 recruited patients with advanced NSCLC without the EGFR mutation who had previously received platinum-based chemotherapy (10). The patients were randomized to receive pemetrexed or gefitinib. The primary endpoint PFS was significantly longer in the pemetrexed group than in the gefitinib group (median PFS 4.8 vs. 1.6 months; P<0.001). This showed that patients with wild-type EGFR did not benefit from gefitinib in a second-line settings.

The ten trials mentioned above were representative, meaningful trials led by Chinese investigators. We want to emphasize the following three points: both gefitinib and erlotinib can be used for EGFR-mutant advanced NSCLC in China and erlotinib might be a better option for patients with BM; EGFR-tyrosine kinase inhibitor (EGFR-TKI) maintenance treatment is also a model for EGFR-mutant patients; and in a second-line or more settings, biomarker detection remains critical. Chemotherapy should be recommended for wild-type EGFR patients.

Trials of EGFR-TKIs as (neo)adjuvant treatment

Several trials have investigated the use of EGFR-TKIs as adjuvant treatment in early stage NSCLC. BR 19 was conducted in completely resected stage IB-IIIA NSCLC from 2003 to 2005 regardless of EGFR genotype (11). Unfortunately, adjuvant gefitinib did not confer a disease-free survival (DFS) or OS advantage in the overall population. The results of the SELECT and RADIANT trials raised widespread concern at the 2014 American Society of Clinical Oncology (ASCO) meeting (12,13). Both trials are of adjuvant erlotinib. The subgroup analysis of the RADIANT trial suggested that adjuvant erlotinib prolongs the DFS in patients with completely resected EGFR-mutated NSCLC, although not significantly so. SELECT was a phase II trial that suggested that patients treated with adjuvant erlotinib had an improved 2-year DFS.

Nevertheless, we are still unsure about the efficacy of (neo)adjuvant EGFR-TKIs based on the above-mentioned results. CTONG 1101, CTONG 1103, and CTONG 1104 should provide more evidence regarding this treatment strategy.

CTONG 1101 (NCT01297101) (14) is a phase II study of intercalated erlotinib with GC as neoadjuvant treatment in stage IIIA NSCLC patients. The disease control rate (DCR) was 92.3%. Five of the thirty-nine patients developed grade 3 common terminology criteria for adverse events (CTCAE). No one developed grade 4 CTCAE. The results showed that the combination as an induction treatment is a feasible, efficacious approach for stage IIIA NSCLC.

CTONG 1103 (NCT01407822) is a phase II study of a new treatment strategy for stage IIIA-N2 NSCLC patients with EGFR activating mutations. Patients randomized to the erlotinib arm took erlotinib orally for 6 weeks in the neo-adjuvant treatment phase and for 1 year or until disease progression or unacceptable toxicity in the post-surgery phase. Patients randomized to the chemotherapy arm received GC for two cycles in each treatment phase.

CTONG 1104 (NCT01405079) is a national, multi-center, randomized, open-label, phase III trial that recruited stage II-IIIA (N1-N2) NSCLC patients with the EGFR activating mutation. The recruited patients were randomized to receive gefitinib for 24 months or vinorelbine plus platinum for four cycles after surgery. The recruiting is complete and the result will be available soon.

Trials of chemotherapy with intercalating and maintenance use of EGFR-TKIs

The EGFR mutation status of some advanced NSCLC patients cannot be determined for several reasons. The treatment strategy for such patients is worthy of investigation. The EGFR mutation rate is 49.8% in non-smokers with adenocarcinoma (15). The high EGFR mutation rate and the results of FASTACT 2 (CTONG 0902) indicated that chemotherapy with intercalating and maintenance use of EGFR-TKIs might be appropriate for selected patients. CTONG1102 enrolled never or light smokers with adenocarcinoma. It evaluated the efficacy of first-line chemotherapy (GC) with intercalating and maintenance gefitinib in selected patients with unknown EGFR mutation status. No results are yet available.

Trials of treatment in a first-line settings

Thrombocytopenia is a common adverse effect of chemotherapy and significantly more common in patients treated with GC (17,18). CTONG1001 is recruiting patients with NSCLC who are going to receive GC/GP chemotherapy. Recombinant human thrombopoietin (rhTPO) will be given on days 2, 4, and 9 of the chemotherapy cycle or 6-24 h from the end of chemotherapy cycle to assess the efficacy and safety of administering rhTPO at different times.

Nab-paclitaxel increases the intra-tumor paclitaxel concentration. Other trials have shown that nab-paclitaxel is superior to paclitaxel (19). CTONG 1002 (NCT01236716) is a randomized phase II trial that will compare nab-paclitaxel and carboplatin with the standard first-line GC therapy in advanced squamous cell carcinoma of the lung. The primary endpoint is the overall response rate (ORR).

As an extension of CTONG 0803, CTONG 1201 is a phase III study that has enrolled EGFR-mutant NSCLC patients with brain metastasis who received no more than one line of chemotherapy to compare the efficacy of icotinib with whole-brain radiotherapy.

Several retrospective studies have shown that the patients who underwent a gefitinib rechallenge might benefit more than those who did not (20,21). We designed CTONG 1304 to evaluate the DCR of gefitinib as third-line retreatment in stage IIIB/IV NSCLC patients with the EGFR 19del/L858R mutation who had benefited from first-line gefitinib treatment and had tumor progression after second-line chemotherapy.

The National Comprehensive Cancer Network (NCCN) recommended erlotinib as second-line therapy in unselected patients, although CTONG 0806 and subgroup analysis from other trials, such as FASTACT 2, had indicated that patients with wild-type EGFR would not benefit from EGFR-TKIs. CTONG 1306, a phase II trial, is designed to evaluate the efficacy and safety of erlotinib in advanced or recurrent NSCLC who failed to respond to at least one platinum-based chemotherapy regimen with wild-type EGFR and without C-met expression.

NCT01610336 is a phase IB/II, multicenter study of patients with EGFR mutated, c-MET-amplified NSCLC who have progressed after EGFR inhibitor treatment. The patients were given INC280 plus gefitinib. This is one of the few phase IB/II trials to recruit patients based on their genetic profile. This study will assess the safety and efficacy of escalating doses of INC280 in combination with gefitinib.

Most of these ongoing trials are intended to extend the indications for EGFR-TKIs, so that more patients can benefit fully from these effective drugs. The results of most of the ongoing trials mentioned above are pending. We anticipate that these results will contribute to changing clinical practice.

The ideal option is to combat tumors with effective antitumor drugs that have low toxicity, such as gefitinib and erlotinib. Compared with chemotherapy, targeted drugs significantly improve patient quality of life and prolong survival. At present, however, only icotinib, gefitinib, erlotinib, and crizotinib have been approved by the State Food and Drug Administration (SFDA). Consequently, only 35% of NSCLC and 0% of small-cell lung cancer (SCLC) can benefit from targeted therapy at present (15). There is an urgent need to identify novel therapeutic targets and develop effective drugs for them.

We plan to launch a phase II cluster study of advanced NSCLC patients in China (22). These patients will be allocated to a specific treatment arm based on their genetic profile: AUY922 for patients with an activating EGFR mutation who are resistant to EGFR inhibitors; BYL719 for patients with a PIK3CA mutation/amplification (other PI3K pathway alterations may be eligible); INC280 for patients with MET-positive tumors [by immunohistochemistry (IHC) or fluorescence in situ hybridization (FISH)]; LDK378 for patients ALK or ROS1 rearrangement; and MEK162 for patients with KRAS, NRAS, or BRAF mutations. Each treatment arm is independent of the others and will be analyzed separately.

As the lung cancer genomic landscape is revealed, more targetable oncogenic drivers with a low incidence will be discovered. Launching separate trials examining each oncogenic driver and the corresponding drugs would be too time consuming. Consequently, clustering of clinical trials will likely become a trend in the near future.

The majority of the completed, ongoing, and planned trials involve drugs that are a milestone in the treatment of lung cancer. The completed trials have established the position of EGFR-TKIs in the treatment of Chinese patients. The ongoing trials will extend the indications for EGFR-TKIs. We hope that Chinese investigators will lead more international trials in the future and contribute more to lung cancer patients worldwide.