Minimal requirements for the molecular testing of lung cancer

A paradigm shift occurred in the past decade in the treatment of lung cancer with the use of targeted agents which improved significantly the survival of patients. Major contributor to these changes was the development of molecular classification of lung cancer and of the adenocarcinoma subgroup in particular. In parallel, a quality assured molecular diagnostic system was developed in the majority of countries accompanied by the development of reimbursement schemes. It seems that this development is continuous where each participant from clinicians to the pathologist have to continuously accomodate to new requirements.

Cancer sampling from the point of pathologist

Pathological diagnostics of lung cancer is still based on biopsies or cytology since only a small minority of cases can be surgically removed (20%) (Figure 1). These types of tumor sampling providing small tissues or limited amount of cells represent a major challenge for pathologists and the type of tumor sampling chose by the bronchologists has a major impact on the quality of diagnosis. With recent changes in the classification of lung adenocarcinoma, the required differential diagnostic protocols requires increased amount of tumor tissues for ancillary techniques such as immunohistochemistry (1). The extended use of these techniques on the other hand defines the minimal amount of tissue necessary for diagnosis. Recent guidelines suggest to minimise the use of cytology replacing with biopsies when diagnosing lung cancer which can provide more appropriate material for differential- and molecular diagnostics (2). Single sampling of lung cancer is an insufficient, inadequate mode of sampling. In case of biopsies multiple sampling is the requirement (minimum of 4) while in case of cytology cell-block technique must be applied. It is evident that the application of cell-block technique requires more cells as compared to simple smear but provides more diagnostic opportunities. Sampling of progressing tumor from mediastinal lymph nodes or from pleural or other effusions are more and more frequently possible providing invaluable material for diagnostics where cytology combined with cell-blocks can be appropriate as compared to biopsy. There are two important issues which must be cleared for oncologist and molecular pathologist. There is a predetermined minimal cell number requirement for ancillary techniques [immunohistochemistry, molecular diagnostics, fluorescent in situ hybridisation (FISH)] and the tumor cell to normal cell ratio of the sample provides a threshold or cut off value for these techniques (3). Accordingly, the primary histopathological diagnosis must provide information for the clinician whether the remaining tissue/cell number is sufficient and/or adequate for further molecular testing.

The most frequent molecular alterations in lung adenocarcinoma are KRAS- (30%) and EGFR-mutation (10-15%) where the minimally required DNA is 5 ng equal to 1,000 cells (3). It would be optimal to provide FFPE materials right at the primary sectioning of the tumor biopsies but the milieu must be than molecular pathologically strictly defined avoiding contamination, allowing microdissection of tumor area providing nuclease-free environment. Since the sensitivity of the applied molecular techniques is different, the tumor-normal cell ratio is critical (Table 1). Sensitivity of various methods is between 1-20% suggesting the minimal tumor cell normal cell ratio in the sample. The most sophisticated next generation sequencing technologies can go fare bellow the sensitivity of previous techniques but for diagnostic purposes they have to be set for 5% threshold rate. However, guidelines suggest not to do molecular testing below 10% T/N ratio due to the increased chance of false results (4,5). 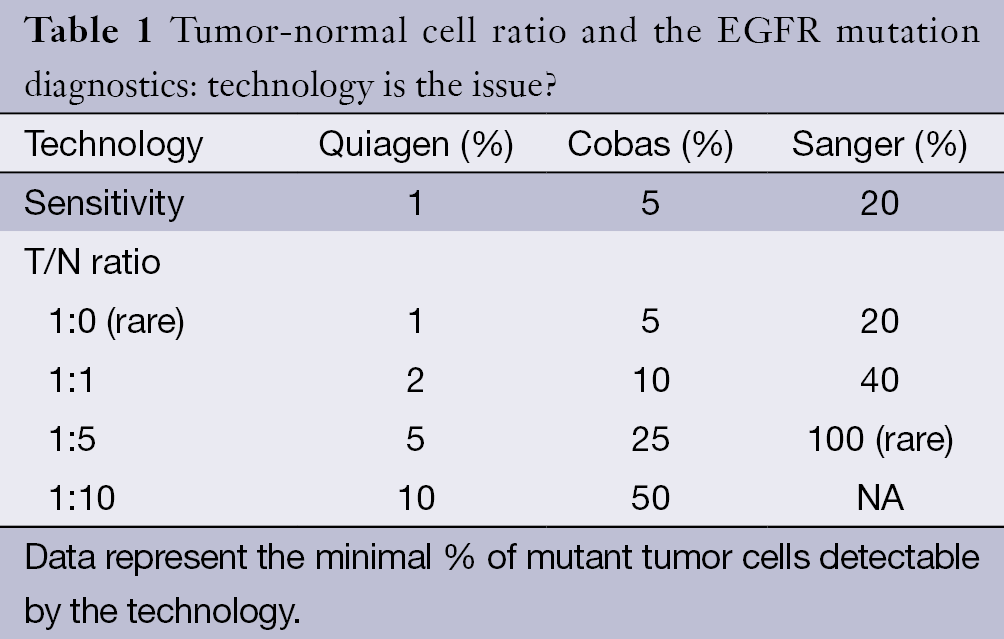 Recent molecular studies identified that ALK translocations occur in lung adenocarcinoma with an estimated frequency of 5% and ROS1 translocation with an estimated frequency of 1%. Both genetic alterations provide a cancer with a constitutively active tyrosine kinase as a driver oncogene. Lung cancers with such genetic alterations are sensitive to ALK or ROS1 inhibitors. Detection of these translocations can be done by using multiplex PCR or sequencing but require fresh samples and RNA. In routine diagnostics of lung cancer these gene translocations are detected by FISH. These tests can be done on FFPE sections which must contain at least 100 cancer cells where the threshold for positivity is 15% (4). These FISH tests are validated for histological sections and not for cytological smears. Meanwhile it can be attempted to perform these tests on cytology samples but the negativity of the result does not exclude the possibility that the tumor contains translocated genes. However, unlike in case of molecular diagnostics of EGFR- or KRAS-mutations, stained cytology smears are not acceptable for FISH testing. Recently various immunohistochemical tests were developed to detect ALK or ROS1 proteins in lung adencarcinoma, which serve as a screening technology for negativity where no further analysis necessary by FISH (4,5). However, none of these immunohistochemical tests are validated on cytology smears.

In developed countries where the reimbursement and capacity of molecular testing of lung cancer is provided reflex testing is possible cutting back the turn around time significantly. However in countries where the reimbursement is inadequate and/or the capacity is inappropriate sequential performance of molecular testing can be justified. These protocols consider the rank of incidence of various molecular alterations and start it with the most frequent one such as KRAS in Caucasian and EGFR in Asian patients, eliminating a significant proportion of samples from further work-up since driver mutations are exclusive in lung cancer (Figure 2). With such a selection hit rate for EGFR mutation can be elevated up to 20% in Caucasians and hit rate can be doubled for ALK mutant patients. In parallel IHS screening for ALK or ROS1 negative lung cancer can be performed. These three analyses can select out a reasonably low proportion of lung adenocarcinomas where the FISH testing for ALK or ROS1 translocations must be performed. The application of sequential molecular testing of lung cancer can reduce the volume and cost of analysis approximately by 30%. 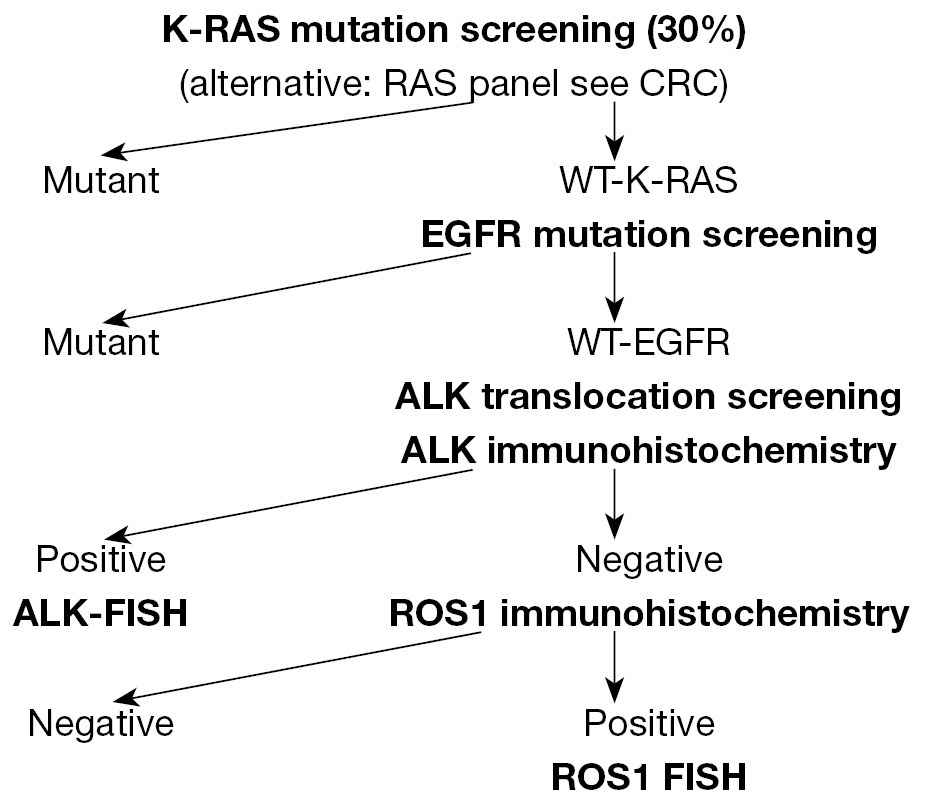 Unlike in case of most solid cancer types, availability of appropriate tumor tissues for differential diagnosis and molecular pathology examinations is a major limiting factor in lung cancer. Tissue biopsy must be the gold standard in sampling lung cancer excluding cytology as much as possible. The requirements of pathological diagnosis and molecular testings can guide the sampling clinician to provide appropriate tumor tissue where the tumor cell- normal cell ratio could affect the choise of techniques of various sensitivities.