Lung cancer patients treated with radical intent are at a 1–2% per patient-year risk for developing a second primary lung cancer (SPLC). SPLCs can be curable, with one analysis even suggesting that its survival is potentially superior to those with initial presentation (1). Survivorship following pneumonectomy has been referred to as having ‘a disease itself’, given the significant impact on lung function and any subsequent lung-directed treatment decision (2).

A lobectomy, the gold standard treatment for early stage non-small cell lung cancer (NSCLC), is often not feasible following pneumonectomy due to cardiopulmonary reserve limitations. Based on a Surveillance, Epidemiology, and End Results (SEER) analysis, sublobar resection appears to be the favored surgical approach for a SPLC post-pneumonectomy, especially when the second lesion is small (<2 cm), without locoregional spread, and where the patient has acceptable lung function (2). This, however, is not without risk, with one study reporting complication and mortality rates of 44% and 8.3% respectively (3).

In the SEER analysis, non-surgical modalities were more commonly (62.9%) employed than repeat surgery (2). Among non-surgical options, stereotactic ablative radiotherapy (SABR) is increasingly being utilized in the primary medically inoperable early stage NSCLC context, with 3-year local-regional control rates greater than 90% (4). Lung SABR is typically well-tolerated, with fatigue being the most common side effect (5). As the literature on lung SABR following pneumonectomy emerges, the aim of this study is to systematically review the literature, with a focus on treatment planning considerations, clinical outcomes, and toxicity.

A systematic review of the literature was conducted in accordance with PRISMA guidelines using the PubMed and EMBASE databases from their respective dates of inception to July 2018. A combination of search terms was designed to capture publications that reported on patients who received lung SABR (“SABR”, “SBRT”, “stereotactic”, “radiosurgery”, “SRS”, or “SRT”) after pneumonectomy. A total of 215 unique entries were identified. Titles and abstracts were screened, and the remaining studies underwent full text review. Two reviewers independently performed abstract and full-text review, with discrepancies settled by a third reviewer. Inclusion criteria included:

Articles were excluded if they were reviews, meta-analyses, guidelines or correspondences. The article selection process is illustrated in Figure 1. Data abstracted from the articles included study design, sample size, age, sex, follow-up duration, time from pneumonectomy, proportion of lesions biopsied, radiation planning and dosimetric parameters, toxicity, and clinical outcomes. Toxicity was graded based on Common Terminology Criteria for Adverse Events version 3.0. The weighted means were calculated by taking individual means reported from each study and weighing by their respective sample size to obtain an overall mean based on studies with available estimates. Weighted proportions were obtained using a similar approach. Biologically effective dose (BED) was calculated using the following formula:

where n = number of fractions, d = dose per fraction, alpha/beta ratio = dose at which the linear and quadratic components of cell killing are equal. We assumed a tumour alpha/beta ratio of 10. Calculations were performed on Microsoft Excel version 16.27.

Of the 215 articles identified by the initial search, 6 articles met inclusion criteria (6-11). The majority of studies (4) were retrospective, and the remaining 2 were case reports. Publication dates ranged from 2009 to 2015.

Characteristics of the combined 53 patients identified in the studies are listed in Table 1. The mean age was 68, and most patients were male (73.7%). The proportion of patients with chronic obstructive pulmonary disease (COPD) was 63.0%. Only one study performed pulmonary function testing prior to radiation, which reported a mean pre-SABR forced expiratory volume in 1 second (FEV1) of 1.4 L and a mean FEV1 change of −0.1 L after SABR (11). The proportion of lesions that were biopsied was 18.9% (range, 0–44.4%). In studies that did not biopsy all lesions, a diagnosis of SPLC was made with a combination of clinical and radiographic (including fluorodeoxyglucose-positron emission tomography) data. The majority of lesions were peripheral (weighted mean: 66.6%). The proportion of patients who received prior radiation to the chest was 31.8% (range, 0–40.0%). The mean time from pneumonectomy was 6.5 years (range, 1.5–8.9 years). 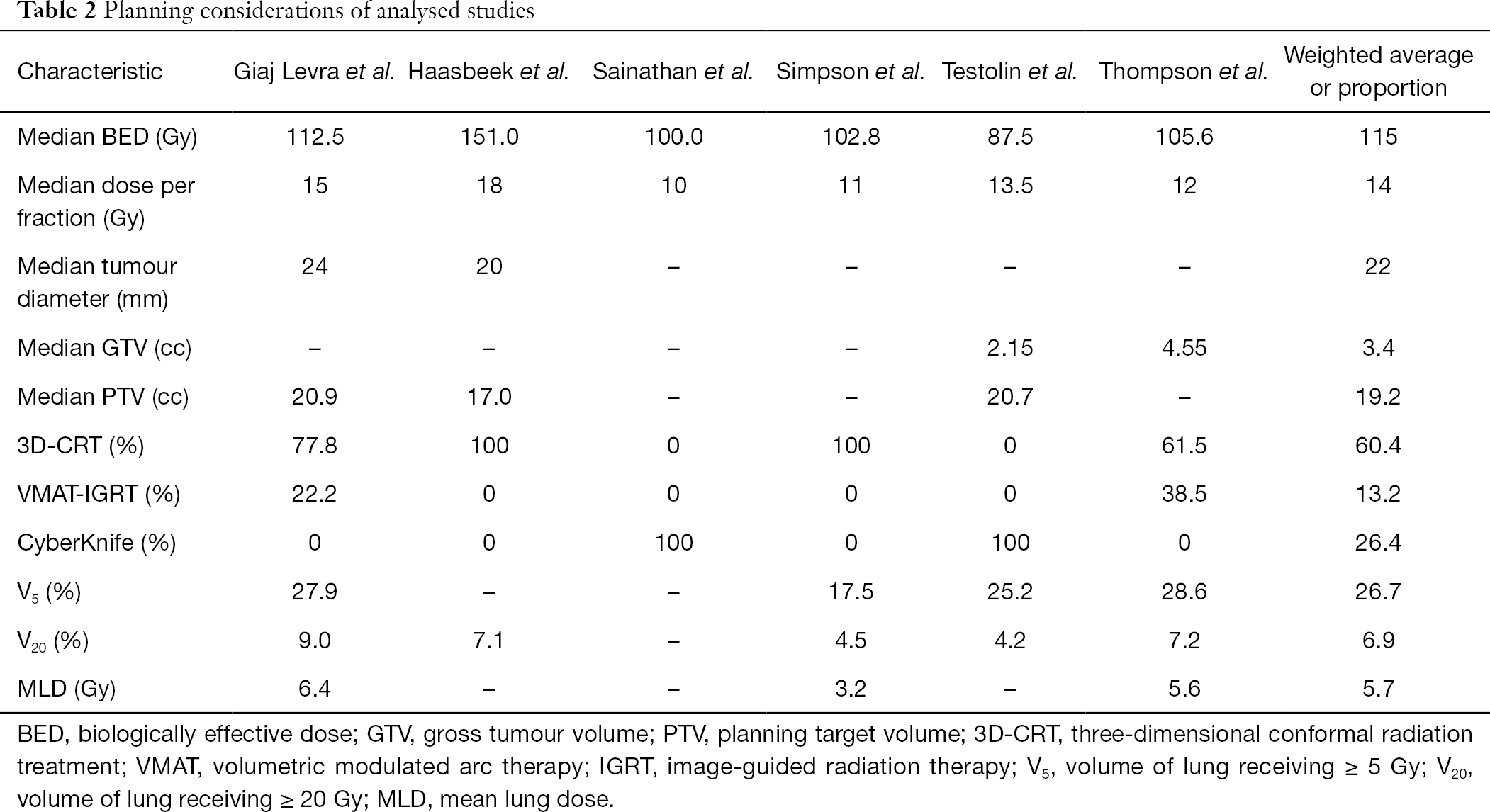 The mean rate of grade 3 or higher toxicity was 13.2%. In one study of 15 patients, 2 (13.3%) developed grade 3 radiation pneumonitis more than 4 months post-SABR (7). The two patients were noted to have higher V20 and PTV compared to other patients at 10.7%/10.2% and 32.2/28.2 cc respectively, and one had prior radiation to the chest. In another study of 13 patients, 2 (15.4%) developed grade 3 radiation pneumonitis more than 3 months post-SABR (11). The V5, V20 and MLD of the patients were 43%/21%, 11%/6% and 8.2/4.6 Gy respectively, compared to 28%, 7% and 5.5 Gy in patients without radiation pneumonitis. The two patients later succumbed to cardiorespiratory failure. One case report described two cases of esophageal perforation after more than 5 months following SABR, one of which led to a patient’s death (8). Both patients had central tumours (within 2 cm of main stem bronchus) treated to 50 Gy in 5 fractions every other day. Another case report described one case of death following bacterial pneumonia and uncontrollable atrial fibrillation 16 months after SABR, though the authors comment that this is unlikely to be related to the treatment itself (9). The patient was treated with 48 Gy in 4 biweekly fractions, and had a V5, V20 and MLD of 18%, 3% and 3.0 Gy respectively. The mean rate of possible treatment-related mortality was 7.8% (4 of 51 patients).

To our knowledge, this is the first systematic review examining clinical and planning outcomes of lung SABR in patients with previous pneumonectomy. While SABR was associated with high rates of local control, clinically significant toxicity was observed in 13.2% cases. Recognizing the limitation of the overall small sample size of patients reviewed, prior mediastinal radiation, higher lung dose and larger treatment volumes were identified as predictors for severe pneumonitis (7,11). Determining the most appropriate dose regimen and planning objectives are of specific interest, especially as SABR appeared to be highly effective with a local control rate in the mid 80 to 90% range.

Pulmonary radiofrequency ablation (RFA) may also be an option post-pneumonectomy. A recent multi-institutional retrospective study of 15 patients who had pulmonary RFA post-pneumonectomy demonstrated 95% local control, and a 2-year overall survival rate of 71.4% (12). Study patients all underwent general anesthetic and intubation. There was a single case (6.7%) of grade ≥3 toxicity (pneumonia requiring intravenous antibiotics), and there were no treatment-related deaths. In contrast, another multi-institutional series of 16 RFA post-pneumonectomy did not stipulate the mode of anesthesia, and reported 3 (19%) deaths treatment-related deaths, from pneumonitis (n=2) and hemothorax (repeat RFA, n=1) (13). Our study summarizes the current knowledge on the efficacy and safety of SABR in post-pneumonectomy patients and serves as a benchmark for future research. Limitations of our study include the small sample sizes that were retrospectively analyzed, and endpoint heterogeneity, limiting the generalizability of conclusions. Furthermore, an additional 5 studies that described SABR following resection were excluded from this review, as they did not stratify outcomes based on the extent of lung surgery. Ultimately, for the safety and efficacy of SABR post-pneumonectomy to be more generalizable to routine practice, we would advocate that studies comprehensively report outcomes alongside radiation planning details, so that further insight can be gleaned on the balance between toxicity and local control in this challenging clinical scenario.

This systematic review demonstrates that SABR appears to be a safe and effective option for solitary pulmonary nodules in survivors of lung cancer with prior pneumonectomy. Multi-institutional and/or prospective studies would be helpful to determine the true risk and appropriateness of SABR in this high-risk patient population.

Conflicts of Interest: All authors have completed the ICMJE uniform disclosure form (available at http://dx.doi.org/10.21037/tlcr.2020.01.18). AV Louie has received honoraria from Varian Medical Systems Inc. and AstraZeneca. AVL serves as the unpaid editorial board member of Translational Lung Cancer Research from Nov 2018 to Nov 2020. The other authors have no conflicts of interest to declare.