The TNM classification is an essential foundation of staging and treatment strategies in non-small cell lung cancer (NSCLC) patients. Lymph node (LN) metastasis is a significant factor compromising prognosis; 5-year overall survival with LNM is only 26–53% (1). Occult LN metastasis accounts for 22.4% of the total occult metastases in resectable NSCLC, and LN metastasis is associated with significantly worse disease-free survival and overall survival (2). The current imaging approaches are not sufficiently precise to diagnose occult LN metastasis before surgery, and invasive biopsy is not widely used due to its technical complexity and high probability of a false negative result. Therefore, more precise and non-invasive methods are warranted to determine the LN status preoperatively and lead to improved treatment strategy.

The research protocol was approved by the Ethics Committee of the First Affiliated Hospital of Guangzhou Medical University, and written informed consent was obtained from all patients before the operation using cancer tissue and blood samples. From October 2015 to January 2016, a total of 119 NSCLC patients with primary lesions less than 3.0 cm in diameter undergoing radical resection with or without adjuvant chemotherapy were performed in the Department of Thoracic Surgery of the First Affiliated Hospital of Guangzhou Medical University, of which 44 plasma samples matched. We retrospectively investigated these patients. The inclusion criteria were as follows: complete surgical resection; systemic LN dissection or sampling (at least three N2 stations or complete LN dissection); negative resection margins observed under a microscope; pathologically proven stages of pT1-3N1-2M0 NSCLC (according to the TNM classification of the 8th edition of AJCC); and the follow-up period was more than 4 months. Factors assessed included age, gender, smoking status, and pathological data (histology, primary tumor stage, and LN stage)

A cohort of 119 age-matched malignant lung nodule tissue samples (27 pN+ and 92 pN0) were used for screening and identifying methylation markers specific for LN metastasis. High throughput targeted methylation sequencing was performed on plasma and tissue samples from patients with malignant lung nodules. We previously described the methods in detail (6), mainly including the isolation of tissue genomic DNA and plasma cell-free DNA (cfDNA), Bisulfite conversion and the AnchorIRISTM targeted methylation sequencing.

The methylation profiles were compared between patients with and without occult LN metastases. We used beta binomial distribution base tool DSS package to detect differentially methylated markers from tissue samples. We obtained 878 differential methylation markers that passed FDR cutoff of 0.2 from tissue samples. Two preliminary prediction models were built by random forest with differentially methylated markers shared by plasma and tissue samples and markers present either in plasma or tissue samples respectively. The performance of these models was then evaluated using receiver operating characteristic (ROC) statistics derived from ten folds cross validation repeated ten times. Bootstraps resample methods with 100 repetitions were used for these activities.

Categorical data were analyzed by Pearson’s chi-squared test (SPSS, version 22.0, Chicago, IL, USA), a two-sided P value of less than 0.05 was considered statistically significant. We used the LASSO logistic regression model with penalty parameter tuning that had been conducted using 10-fold cross-validation based on minimum criteria. The likelihood ratio test with backward stepdown selection was applied to the multivariate logistic regression model. Detailed descriptions of the LASSO algorithm and DCA are provided in the supplementary data. R statistical software (v3.4, Bell Laboratories, Murray Hill, NJ, USA) was used for all statistical tests. We used the “glmnet” package to perform the LASSO logistic regression model analysis. Random forest implemented in Random Forest R package was used to build the predictive model. 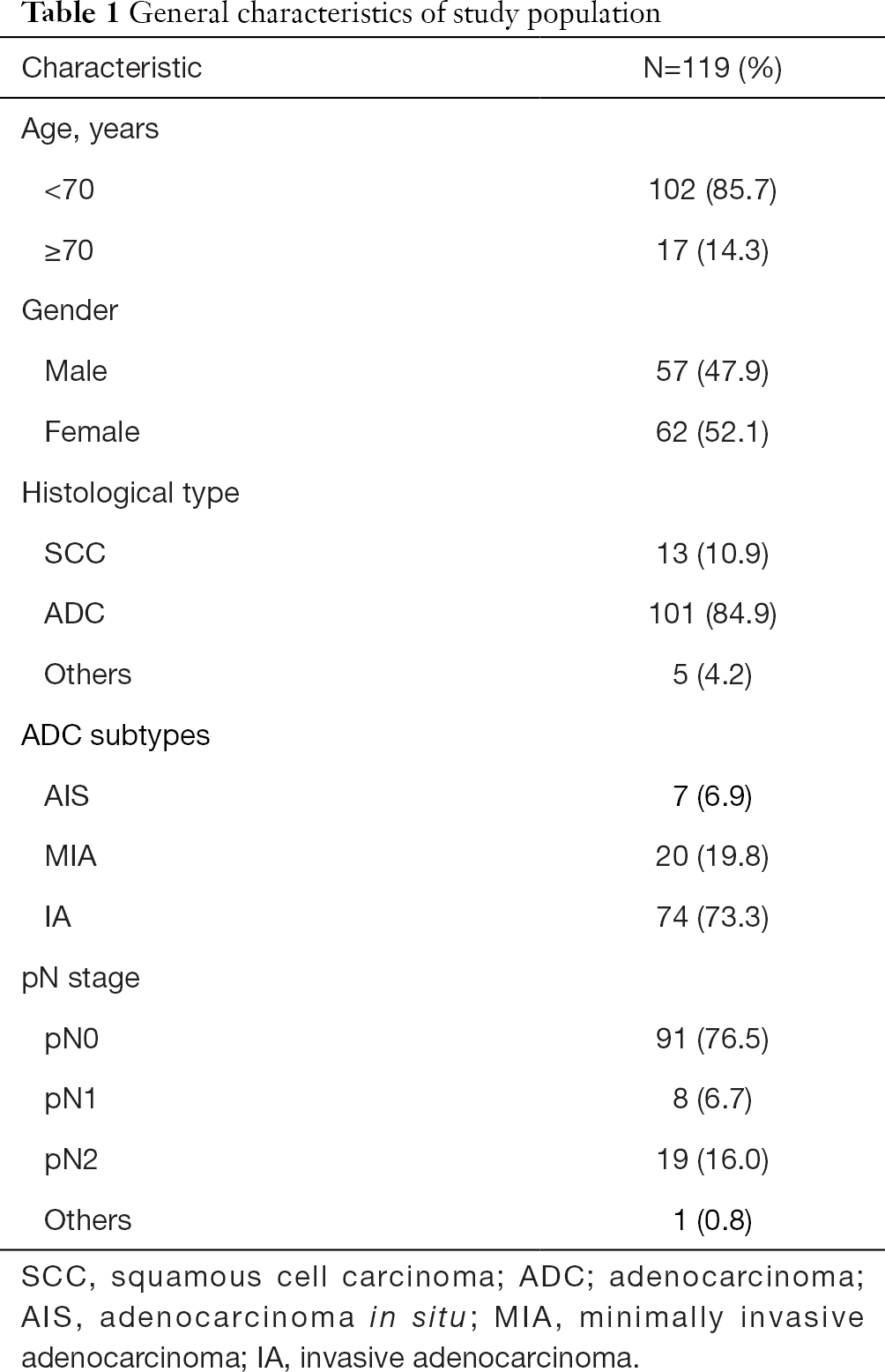 General characteristics of pN0 group and pN+ group in 119 cases 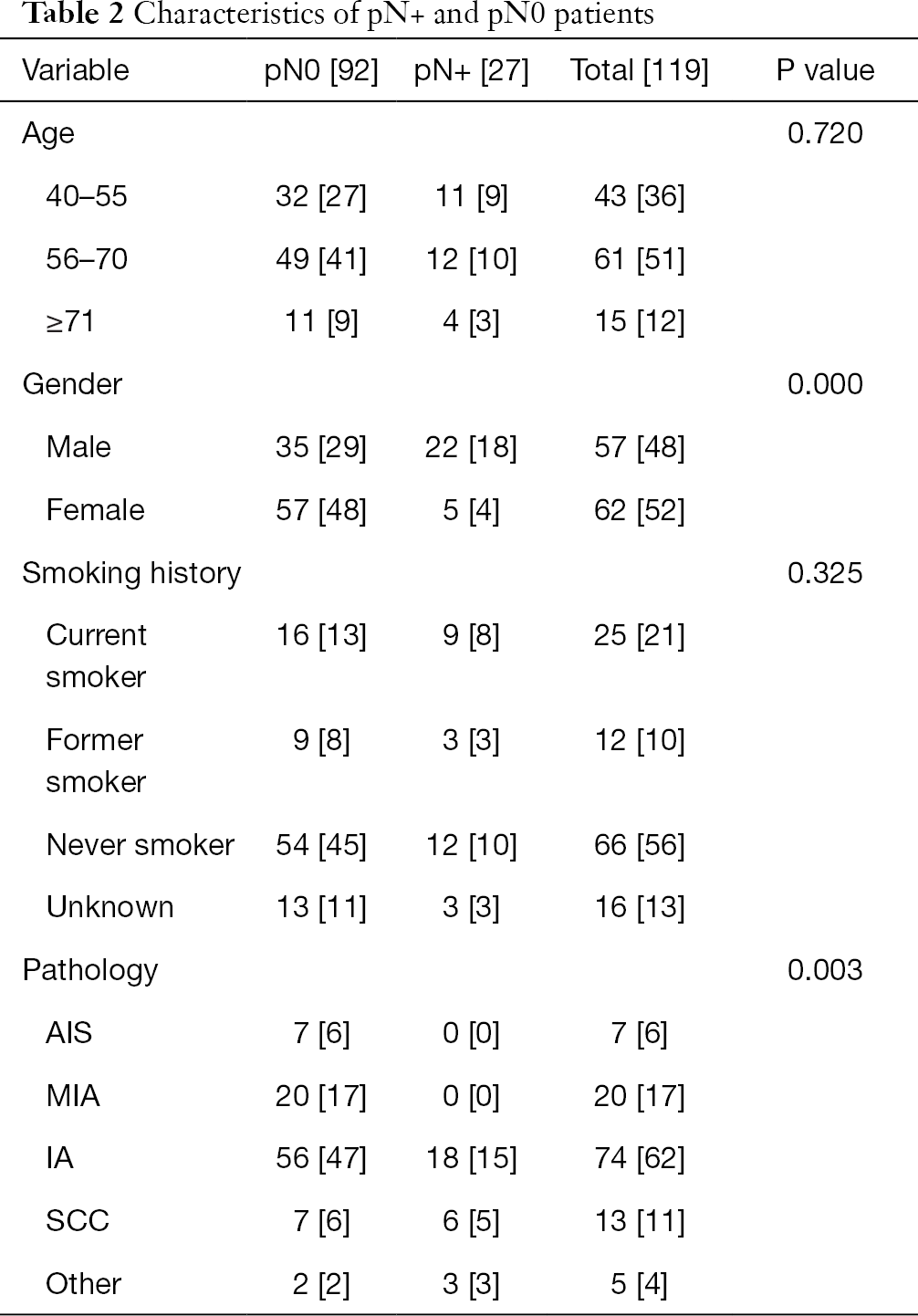 To the best of our knowledge, this is the first study to show a specific non-invasive blood diagnostic tool cfDNA methylation markers in occult LN metastasis of NSCLC and to observe its predictive value. Previously, it was assumed that adenocarcinoma, upper or middle lobe located lesions, tumor size >3.0 cm, and primary tumor FDG-PET/CT SUVmax >4.0 g/mL were significant risk factors for occult mediastinal LN metastasis, and 68% of these metastatic foci were smaller than 4.0 mm (8). Furthermore, papillary-predominant and solid-predominant subtypes were significantly higher in occult nodal metastasis rate (9). We previously performed a radiomics nomogram to predict LN metastasis in solid lung adenocarcinoma, and showed that fourteen radiomics features were significantly correlated with LNM. Excellent calibration and discrimination in the training cohort and validation cohort were achieved, with an AUC of 0.871 and 0.856, respectively (10). However, the radiomics model was based on relatively large tumors and none of the above has been found to direct occult metastasis of LNs. Considering the difficulty in obtaining occult LN metastasis tissue, we still need desirable diagnostic tools to judge preoperative occult LN metastasis and postoperative residual LN metastasis.

LN metastases are driven by high tumor burden and specific biology. Greater tumor size is associated with higher risk for LN metastases (11). On the other hand, highly motivated tumor cells and a promoting environment contribute to this process especially in the early phase of disease. Occult metastasis of LNs is featured by small primary tumor and small LN burden, where biology plays a key role. Aberrant methylation is common in NSCLC and represents a promising marker for the molecular staging of these patients (12).

In this study, high-throughput targeted methylation sequencing was performed on plasma and matched tissue samples from a cohort of 119 lung cancer patients with a primary lesion less than 3.0 cm in diameter. The methylation profiles were compared between cases with and without occult LN metastases. There were no significant differences in age, gender, and smoking status between the two groups, but there were significant differences in pathological types. Invasive adenocarcinoma and other tumors (carcinoid, large cell carcinoma, mucoepidermoid carcinoma and lymphoepithelioma like carcinoma) significantly increased occult LN metastasis (P=0.003).

We obtained 878 differential methylation markers that passed FDR cutoff of 0.2. The selected methylation markers were subsequently used in building a robust statistical model for predicting LN metastasis in 22 pN+ and 22 pN0 plasma samples of NSCLC patients. 37% (19 out of 52 genes) of these cluster markers could be found in the matched tissue samples. We built a random forest predictive model with 19 markers shared by tissue and plasma samples and achieved an AUC of 88.6% (95% CI, 87.8–89.4%). We also attempted to build another predictive model with 911 markers present in either tissue or plasma samples and achieved an AUC of 74.9% (95% CI, 72.2–77.6%).

Conﬂicts of Interest: All authors have completed the ICMJE uniform disclosure form (available at http://dx.doi.org/10.21037/tlcr.2020.03.13). WL serves as an unpaid Associate Editor-in-Chief of Translational Lung Cancer Research. The other authors have no conflicts of interest to declare.

Ethical Statement: The authors are accountable for all aspects of the work in ensuring that questions related to the accuracy or integrity of any part of the work are appropriately investigated and resolved. The protocol of this study was approved by the Ethics Committee of the First Affiliated Hospital of Guangzhou Medical University (No. Kls2015-25).