Anatomic segmentectomy is the removal of a segment of the lobe in the lung. For many years, segmentectomy has been performed for the treatment of bronchiectasis. Since 1970, surgeons have increasingly applied segmentectomy for the treatment of non-small cell lung cancer (NSCLC). In 1995, a randomized controlled trial reported by the Lung Cancer Study Group (LCSG) demonstrated the advantages of lobectomy over sublobar resection in regards to local recurrence and long-term survival for patients with T1N0 NSCLC (1). However, this study did not specifically evaluate smaller lung tumors (<2 cm), which in recent years have been identified with greater frequency through the use of low-dose computed tomography (LDCT) screening (2-4). Secondly, the LCSG study indicated that the use of wedge resection without systemic lymph node dissection, in similar fashion to sublobar resection, leads to higher local recurrence compared to lobectomy. Therefore, the optimal treatment for small peripheral lung cancer still remains to be defined, and there is a pressing need to evaluate the benefits of anatomical segmentectomy for patients with small-sized (<2 cm) stage IA NSCLC (5).

Video-assisted thoracic surgery (VATS) is a minimally invasive thoracic surgery that has been adopted by many surgeons for small pulmonary lesion resection, with expected shorter hospital stay, reduced pain, and improved functional recovery in comparison to traditional open thoracotomy (6-8). In the past decade, thoracoscopic segmentectomy has gained popularity and has proven to be a safe procedure with comparable oncologic results for small peripheral NSCLC compared with lobectomy (8,9).

Meanwhile, the use of robotic lung resection has sharply increased in the past 5 years (10), but the application of robotic anatomical segmentectomy (RATS) has scarcely been reported on (11,12). After years of practice in an accredited academic center for minimally invasive thoracic surgery, we developed a robotic surgery program with the da Vinci Robotic System (Intuitive Surgical Inc., Mountain View, CA, USA) in 2009, and have been implementing this program ever since. In this study, we compared the safety and oncologic effectiveness of RATS to VATS segmentectomy for NSCLC patients with small-size (<2 cm) stage IA tumors. We present the following article in accordance with the STROBE reporting checklist (available at http://dx.doi.org/10.21037/tlcr-20-533).

This retrospective study analyzed 130 patients who were resected with stage IA (T1a-T1bN0M0) NSCLC at Shanghai Chest Hospital between November 2011 and January 2018. Patients were included if they had undergone RATS or VATS, in which the segmental veins, arteries, and bronchus were divided separately. Written informed consent was required from all patients before operation. The patients that were included were primarily stage IA NSCLC with T1a and T1b tumors (<2 cm). We excluded patients who had undergone induction therapy, with large tumors (>2 cm), central lesions, or multiple lesions. Patients with positive lymph nodes were also excluded. Clinical data, including age, sex, pulmonary function, comorbidity, perioperative outcomes, and mortality, were evaluated from a prospective database.

Chest drainage tubes were removed when there was no obvious air leak and when liquid output was lower than 300 mL for a 24-hour period. Patient-controlled intravenous narcotics, lornoxicam injection, oral oxycodone, or a combination of the above, were used as a multimodal analgesia if the patient had a pain level greater than 3 of 10. Each dosage of oxycodone or lornoxicam was marked as 1 point. Patients were weaned from oral narcotics beginning the first week of discharge. Patients were instructed to go about their routine daily activity after discharge.

Statistical analyses were performed using SPSS 18.0 software (SPSS Inc, Chicago, IL, USA). All data were expressed as mean ± standard deviation. Differences between groups were tested by χ2 test or Fisher’s exact test. The Kaplan-Meier method and log-rank test were used to evaluate the overall survival and recurrence-free survival. The predictors of recurrence-free survival were evaluated by multivariate Cox regression analyses. A P value of lower than 0.05 was accepted as statistically significant.

Docking and port selection of RATS

Patients were positioned on the lateral decubitus position similarly to VATS. The robot was placed to the posterior of the patient with a 30–45° angle between the vertebral column and the transverse axis of cart. Either 3 or 4 ports were used, and the fourth port was used to retract the lung if necessary. A 1 cm incision for the camera port was made in the seventh or eighth intercostal space on the posterior axillary line. We used a 12 mm robotic 0-degree camera. Robotic arm 1 and 2 were placed 10 cm from the camera port along the same rib. The 8 mm metal reusable da Vinci trocars were placed for robotic arm 1 and 2, and an 8 mm bipolar curved tip dissector and a Cadiere forceps were used respectively. Under direct vision, a utility port was made at the fourth or fifth intercostal space behind the pectoralis major, and a 12 mm plastic disposable port was placed. The fourth robotic arm, when used, was placed just anterior to the spinal process of the vertebral body below the major fissure. The camera port was placed more laterally on left side than the right side for the location of the heart.

Segmentectomy was performed as reported previously, in which the vein, artery, and bronchus of 1 or more segments were divided separately (13,14). For both RATS and VATS, we used similar operative procedures. We first dissected the fissure, and removed the hilar lymph node around the segmental artery and bronchus. Segmental arteries or veins were clipped by hem-o-lok (Teleflex Medical, Research Triangle Park, NC, USA) and a titanium clipper, or stapled by endoscopic stapler. The segmental bronchus was routinely stapled. The intersegmental plane was stapled by endoscopic stapler after the bronchus was clamped and the remnant lung was reventilated. The surgical margin of the lung parenchyma was at least 2 cm. We did not use glue or sealant in any of the patients. A single 28-F chest tube was placed through the camera port. 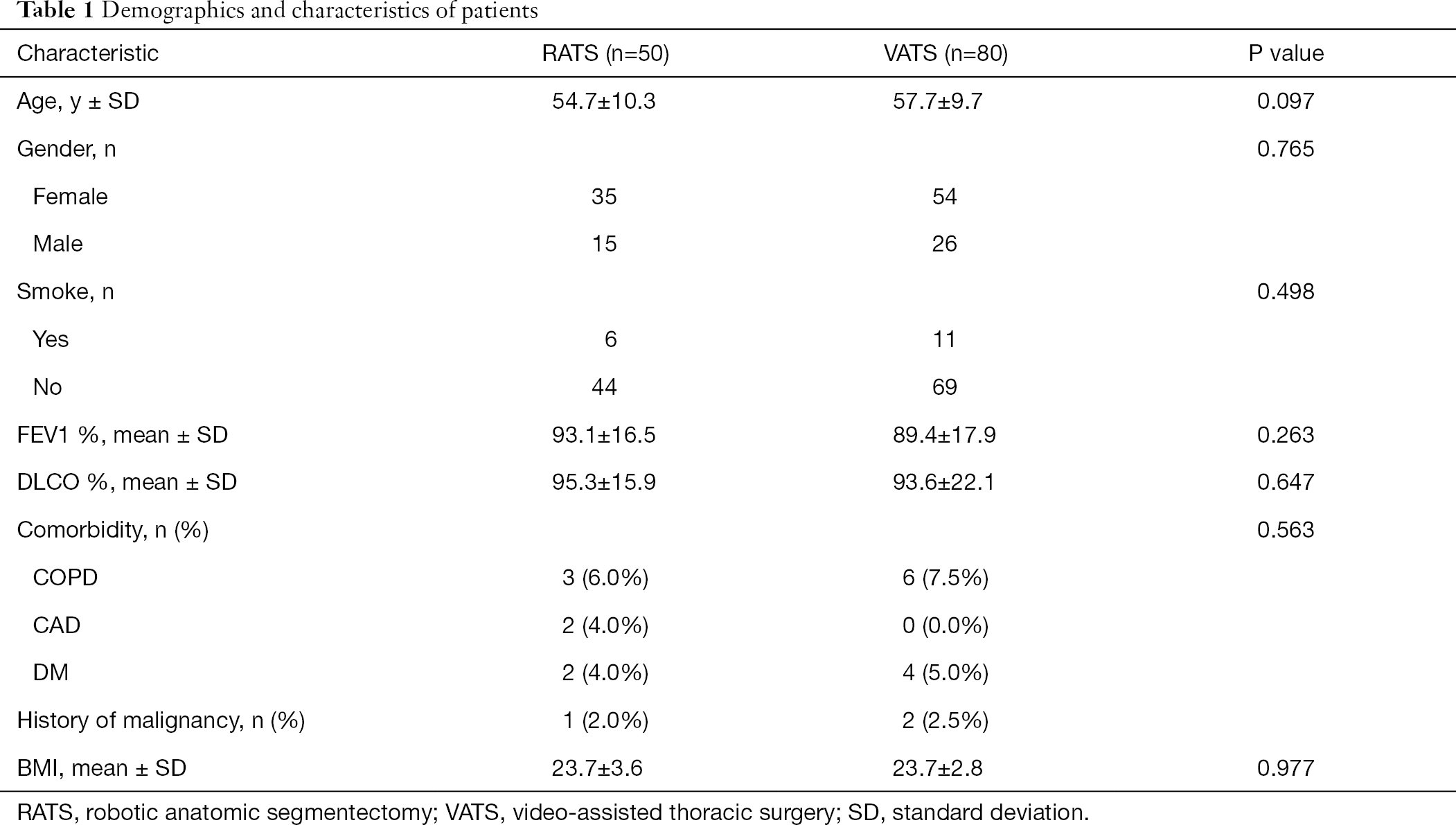 The mean tumor size in RATS and VATS patients was 1.14 and 1.24 cm respectively (P=0.133). Data on tumor location, pathologic diagnosis, and resected segments in the RATS and VATS groups are presented in Table 2. Two pathologists had confirmed the diagnosis and staging according to the International Association for the Study of Lung Cancer 8th Tumor, Node, Metastasis, Staging System. The composition of histologic subtype was similar between the RATS group and VATS group (P=0.299). 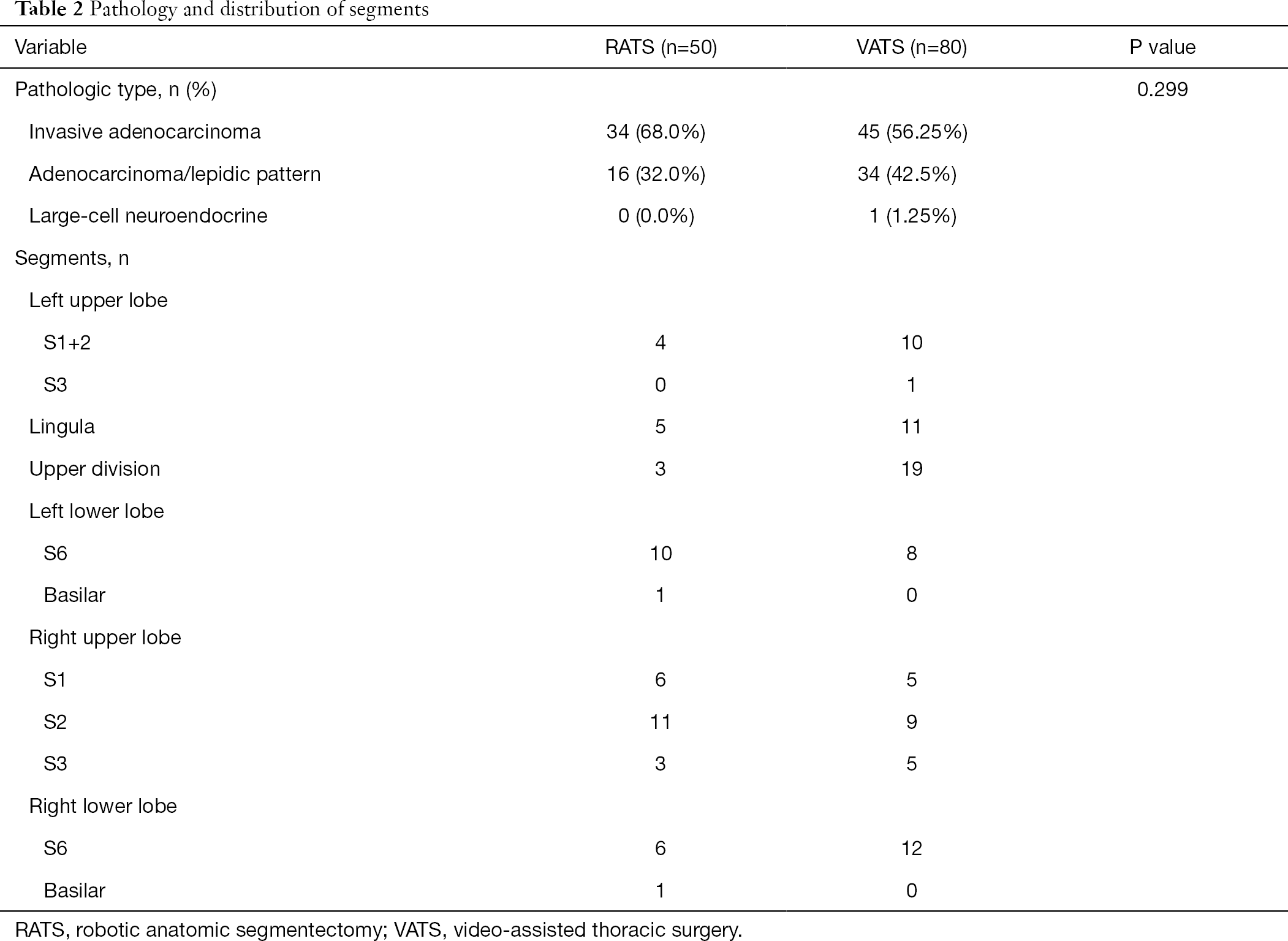 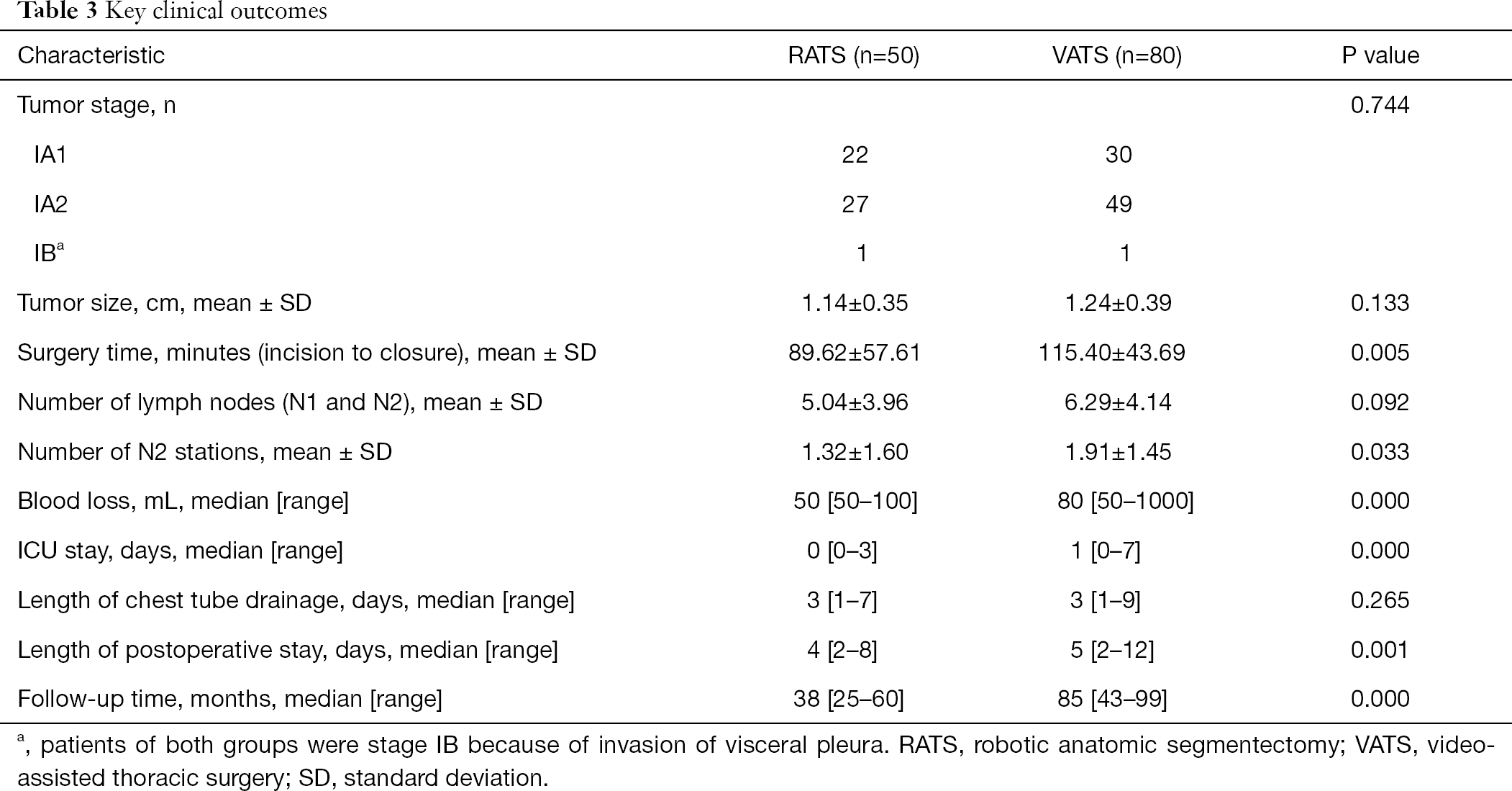 There were 6 (12%) minor morbidities in the RATS group compared with 11 (13.8%) in the VATS group (P=0.773). There were no operative, or 60-day or 90-day mortalities in either group. The data for the complications of the RATS and VATS groups are listed in Table 4; none of the patients had a major cardiopulmonary complication.

Patients undergoing RATS segmentectomy demonstrated a lower use of analgesics during the postoperative stay in hospital compared with the VATS patients (P=0.000) (Figure 1A). An earlier return to routine daily activities was also observed for the RATS group (P=0.002) (Figure 1B). 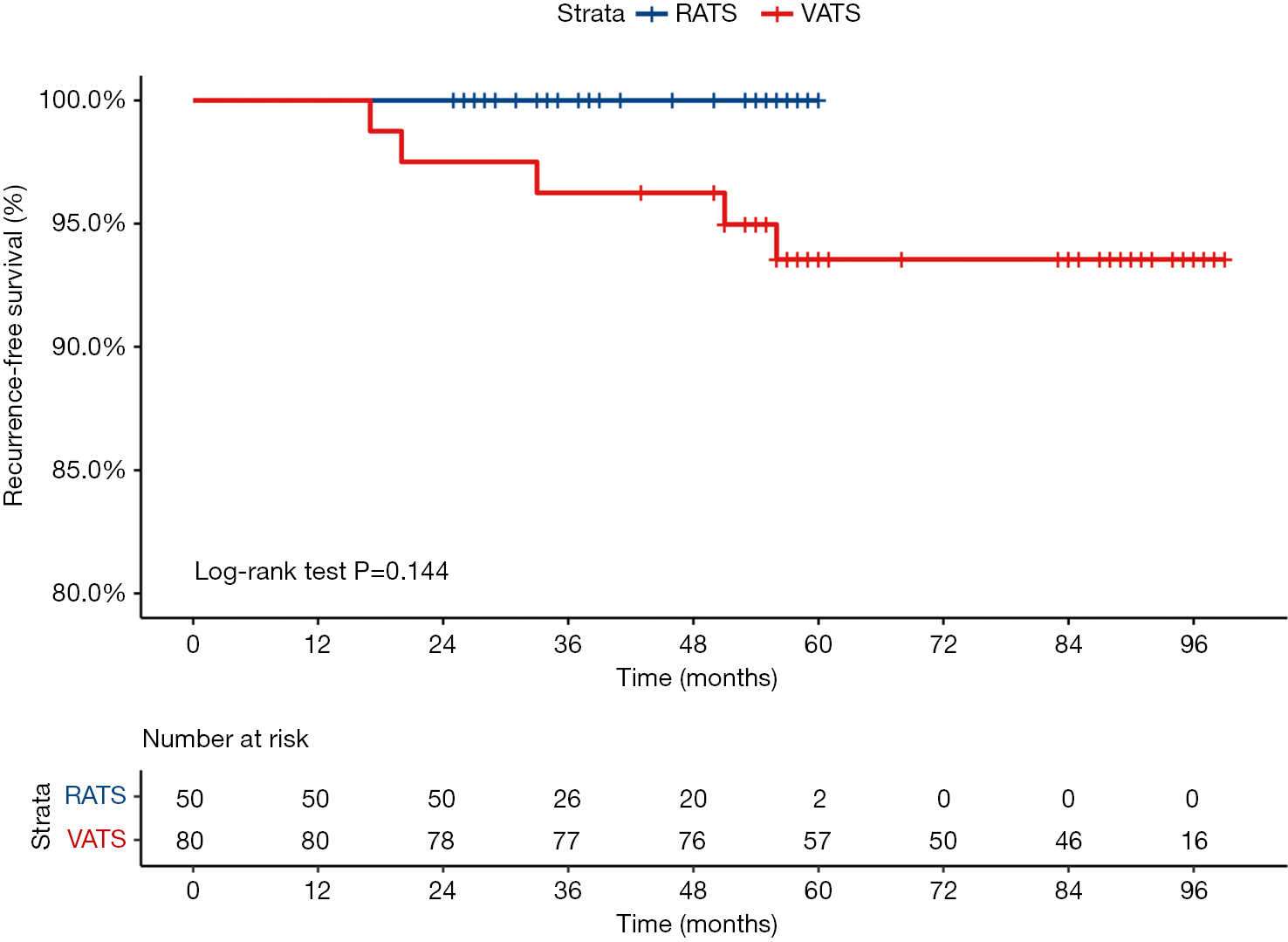 With the increase of experience in minimally invasive thoracoscopic surgery, more surgeons have become interesting in applying VATS in highly select patients with smaller NSCLC tumors, or with compromised cardiopulmonary function (15). Although VATS is considered to be a more complicated and time-consuming procedure, several studies have shown that VATS confers benefits of shorter length of chest tube duration, reduced length of stay, and lower rates of complications, while maintaining an equivalent survival rate compared to open segmentectomy (16-18). In a recent well-matched study, VATS also appeared to have similar operation time, rates of morbidity, local recurrence, and survival rate when compared to VATS lobectomy in stage IA NSCLC patients with small-size tumors (19).

Due to the growing knowledge of robotic lung resection techniques, the frequency of robotically performed lobectomy has tripled in the last 3 years (10). However, only 4 original reports that focus on robotic segmentectomy exist (11,13,20,21), and to our knowledge, the comparison between RATS and VATS for small (<2 cm) stage IA NSCLC has been understudied. Previous segmentectomy studies included patients with compromised cardiac or lung function, and thus might have underestimated the benefits of segmentectomy (12,15). In the current study, both the RATS and VATS groups mostly included patients with normal lung and cardiac function whose tumors were smaller than 2 cm.

Our findings point to the similar capability of RATS and VATS in dissecting lymph nodes. This was somewhat unexpected, as our original impression was that the wrist-like action of the robotic instruments would confer superiority in this regard. The available evidence proves that VATS segmentectomy can harvest an equal numbers of lymph nodes compared to open segmentectomy (17,18). Previous reports comparing mediastinal lymph node dissection have also demonstrated the equivalence between RATS and open surgeries (25,26). The lack of difference in total dissected lymph nodes between the 2 groups supports performing a radical lymph node dissection in both the hilum and mediastinum via the VATS approach, given sufficient focus and effort.

Some limitations to this study should also be addressed. The retrospective nature of this research is a limitation which might have caused potential treatment-selection bias. There are two ongoing randomized controlled large-scale trials of sublobar resection for small-sized NSCLC: CALGB 14503 and JCOG 0802 /WJOG 4607L (9,27). Both trials might help to identify the role of segmentectomy in treating small stage IA NSCLC. However, neither trial has included operative approach (e.g., RATS vs. VATS, or VATS vs. open) as a primary research variable. As we know, the major critic to RATS is its additional cost. The initial purpose is to compare the perioperative outcomes and oncologic effect of the two avant de gard surgical techniques, though the difference of cost between two techniques cannot be neglected. Current study lacks a comparison of the costs of the two surgical methods, which is its limitation. Future prospective randomized studies on RATS, VATS, and open approaches are necessary to clarify the role of segmentectomy for small-sized stage IA NSCLC.

The increasingly frequent implementation of computed tomography (CT) in general medical examinations and in the screening of lung cancer will result in the greater detection of early stage lung cancers for which surgical resection will be indicated. Our research demonstrated that RATS is equally safe and provides excellent oncologic effectiveness when compared to VATS in the treatment of stage IA (<2 cm) NSCLC. Not only did RATS result in shorter operation time and postoperative stay, but also conferred less blood loss during the operation. The reduced narcotic use and earlier return to routine daily activities of RATS patients might reflect its less traumatic nature, however, this conclusion needs be confirmed with further blinded pain assessment and trauma-related cytokine investigation.

Reporting Checklist: The authors have completed the STROBE reporting checklist. Available at http://dx.doi.org/10.21037/tlcr-20-533.

Conflicts of Interest: All authors have completed the ICMJE uniform disclosure form (available at http://dx.doi.org/10.21037/tlcr-20-533). The authors have no conflicts of interest to declare.

Ethical Statement: The authors are accountable for all aspects of the work in ensuring that questions related to the accuracy or integrity of any part of the work are appropriately investigated and resolved. The study was approved by the Ethics Committee of Shanghai Chest Hospital. Written informed consent was required from all patients before operation.