Lung malignancy is the most frequent cause of cancer-related mortality in the world, accounting for approximately 24% of all cancer-related deaths in the United States (1). Tumor size, a readily assessed feature on medical imaging, is a key determinant in the staging of lung cancer, with many studies correlating increasing tumor size with decreasing overall survival (2,3). Unsurprisingly, most changes in the recently revised tumor-node-metastasis (TNM) classification for lung cancer are based on the largest tumor dimension (4,5).

Converging evidence from the biologic and genetic sciences suggests that size alone is insufficient to explain the progression of lung cancer. Small primary tumors (<5 mm) can demonstrate a remarkable ability to metastasize to local lymph nodes and distant organs (6), thus supporting the hypothesis that lung cancers are not uniform in their biologic or genetic make-up. Indeed, genetic analyses of lung cancers have revealed different genetic and morphologic phenotypes both within a tumor and across different tumors (7,8). Co-existence of lung cancers with non-invasive tumors cells, metastatic tumor cells, or a polyclonal population of both offers a compelling explanation for the co-existence of an early T stage and an overall stage IV tumor (9).

Patients with BRAF-mutated non-small cell lung cancer (NSCLC) were included in the study in order to have a homogeneous study population and minimize any confounders related to different driver mutations of lung cancer and different histologic subtypes. BRAF mutations are a rare, but potentially targetable mutation in the treatment of NSCLC (18). BRAF is a protein kinase in the RAS/MAPK pathway, which can lead to cell proliferation and oncogenesis when constitutively activated (19). The clinical features and traditional semantic imaging characteristics of BRAF-mutated NSCLC have been previously reported (19,20). To our knowledge, however, the radiomic features of BRAF-mutated NSCLC and the role of these radiomic features in predicting cancer stage have yet to be investigated. To address these knowledge gaps, we assessed the role of radiomic features to differentiate between different TNM stages (I-IV) of BRAF-mutated NSCLC.

We present the following article in accordance with the MDAR and STROBE reporting Checklist (available at http://dx.doi.org/10.21037/tlcr-20-347).

The study was conducted in accordance with the Declaration of Helsinki (as revised in 2013). This study was reviewed and approved by the Partners Human Research Committee (Institutional review board protocol numbers 2019P000198, 2016P000767). Informed consent was waived by the IRB due to retrospective nature of the study.

Our hospital thoracic oncology database between 2005–2017 was searched to identify BRAF-mutant NSCLC. The presence of BRAF mutation was confirmed with either SNaPshot, a technique that uses next generation sequencing to interrogate BRAF exons 11 and 15, or polymerase chain reaction technique for those diagnosed before 2014. This search yielded 105 patients who had pre-treatment scans available for review. After excluding 43 patients who had only attenuation correction CT performed as part of CTPET imaging and those with CT imaging without IV contrast, 62 patients with diagnostic contrast enhanced CT scans were selected for the study. The included scans were without motion or beam hardening artifacts that could limit the assessment of lung cancer. The specific BRAF mutations were V600 in 27 and non-V600 in 35 patients. The functional classes (21) of BRAF mutant NSCLC were: class 1 in 27/62, class 2 in 22/62 and class 3 in 13/62 patients (Figure 1). The demographics and clinical features such as gender, age, race, histology, smoking history and duration of smoking were extracted from patient electronic medical records.

Figure 1 Flow-chart diagram showing the inclusion of patients in the study.

The CT examinations were performed on multidetector-row CT scanners (MDCT) from various vendors using automatic exposure control or fixed mA at a tube potential of 100–120 kV. Images were acquired after administration of intravenous iodinated contrast with standard oncology imaging protocol. Image reconstruction was performed at slice thickness of 1–3 mm for chest using standard soft tissue reconstruction kernels and at a minimum of 5 mm for abdomen and pelvis with images also reconstructed at sagittal and coronal planes. When available brain MRI, head CT, and FDG-PET images were reviewed to determine the stage of lung cancer.

The imaging studies were reviewed by two thoracic radiologists (DPM and SRD) with 1 and 17 years of experience. The images were assessed concurrently and in consensus. The primary tumor assessment included size, location, density (solid, mixed, ground-glass), cavitation, air bronchogram and calcification. The stage of the tumor was determined based on the primary tumor, nodal disease and other sites of disease with in the thorax and outside the thorax based on TNM 8th edition. The histological confirmation was considered gold standard for nodes and metastases when available. Otherwise FDG avidity on PET scan and standard CT imaging features such as nodes greater than 1 cm in short axis and interval growth were taken as proof of disease. The measurements on standard imaging features included maximum and minimum tumor dimensions and lesion density (mean Hounsfield unit, HU). 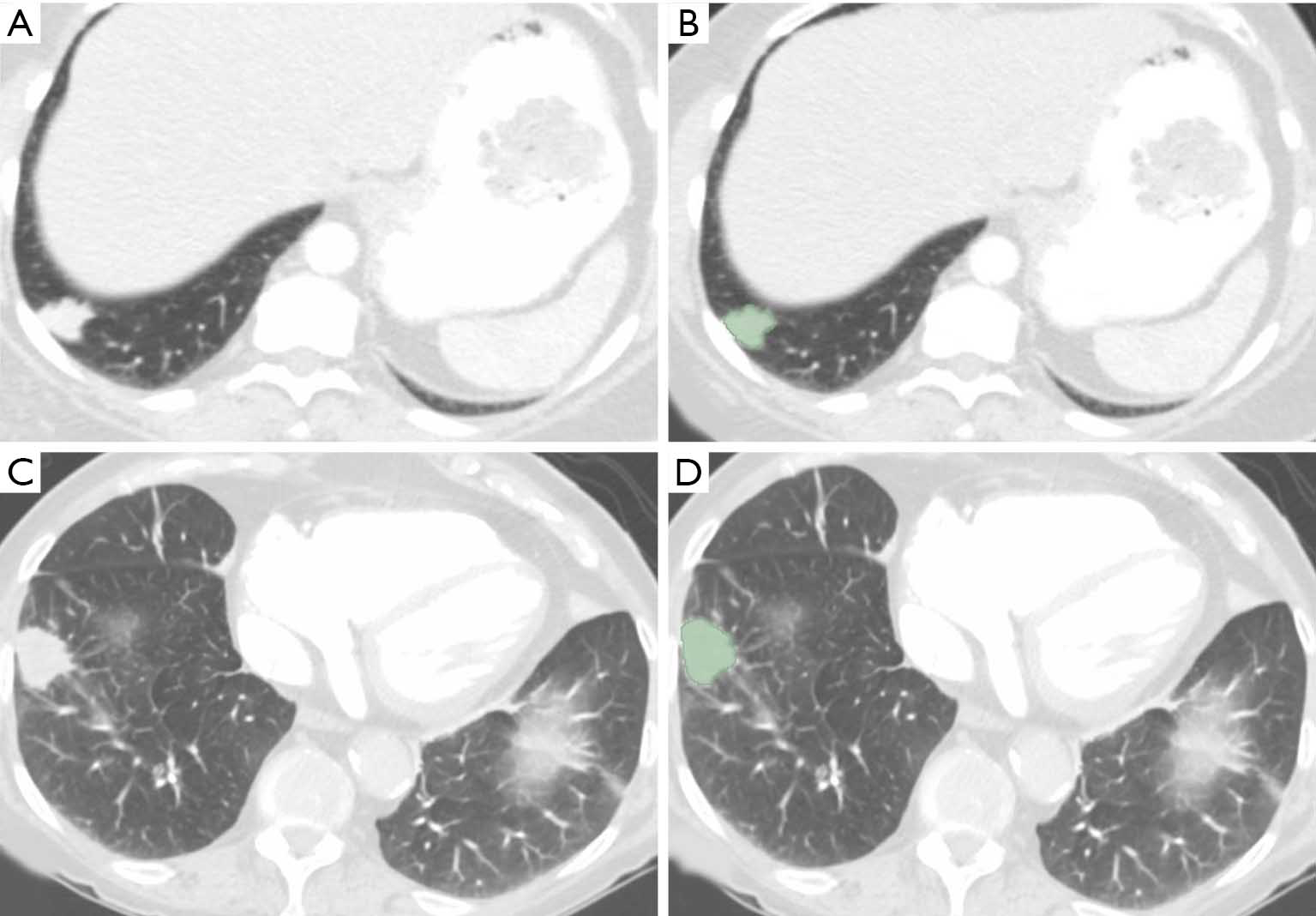 Data were analyzed using SPSS 21 statistical software (IBM, Armonk, NY). Pearson correlation coefficient was calculated for clinical, imaging and radiomic features. Univariate and multivariate logistic regression was performed to determine the most significant features. To avoid the multiple collinearity, the variance inflation factor (VIF) was calculated with linear regression analysis. Only, predictors with VIF of less than 5 were selected to determine the significance of radiomic features. Receiver operating characteristics (ROC) area under the curve was generated for clinical, imaging, and radiomic features. For comparing the radiomic features, two-tailed Student’s t-test was used. A P value of less than 0.05 was considered statistically significant.

The patient demographics are described in Table 1. 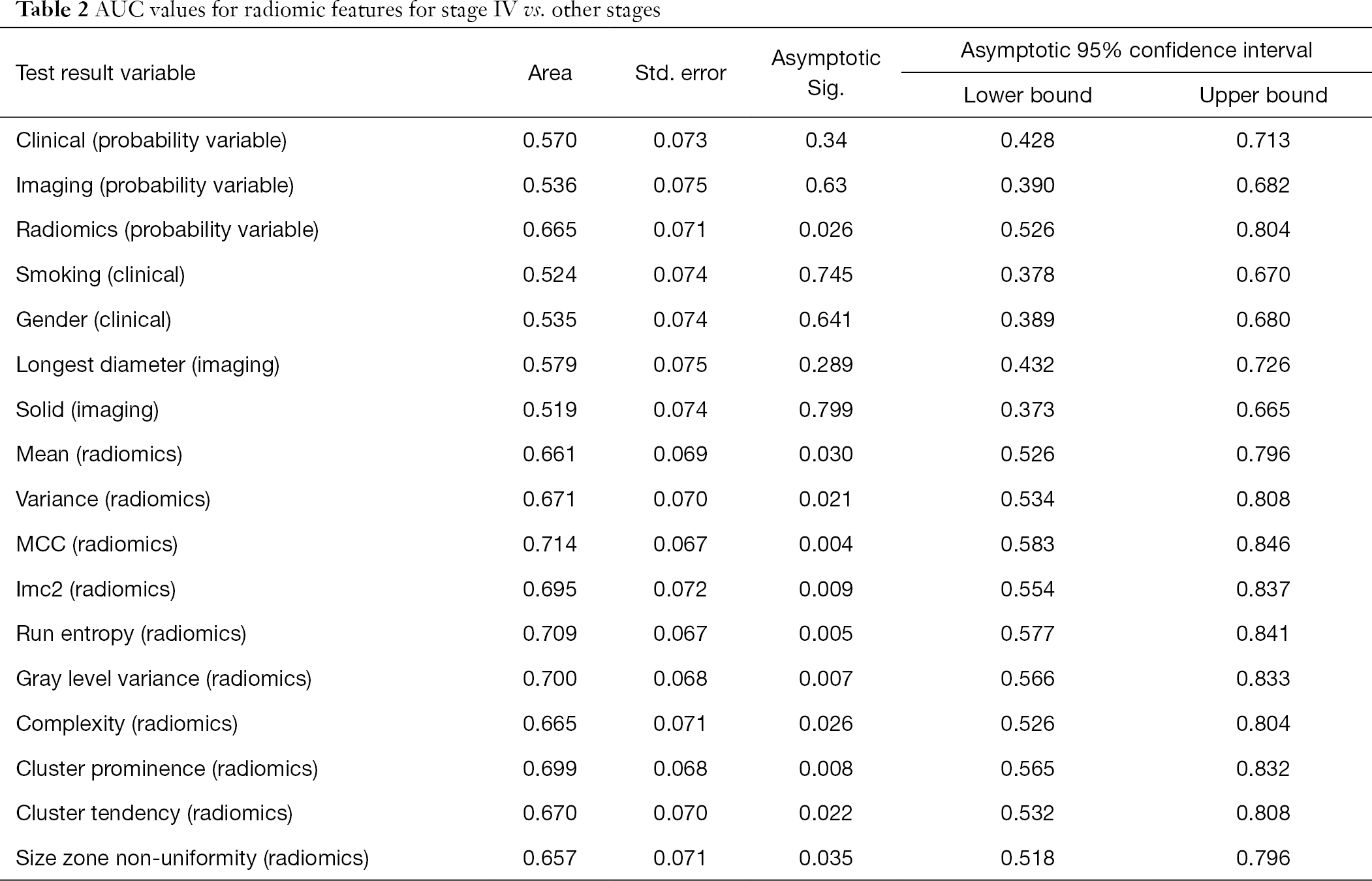 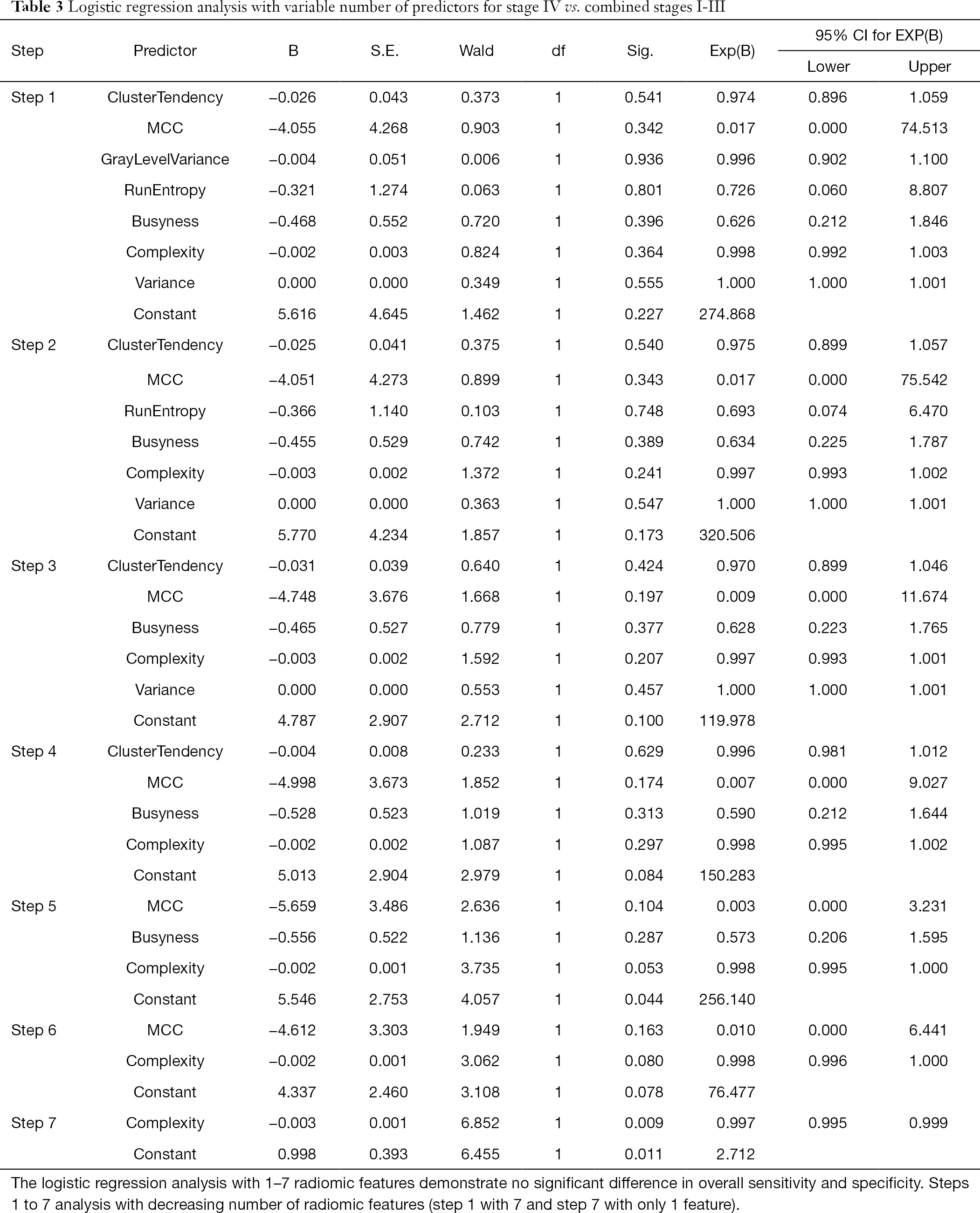 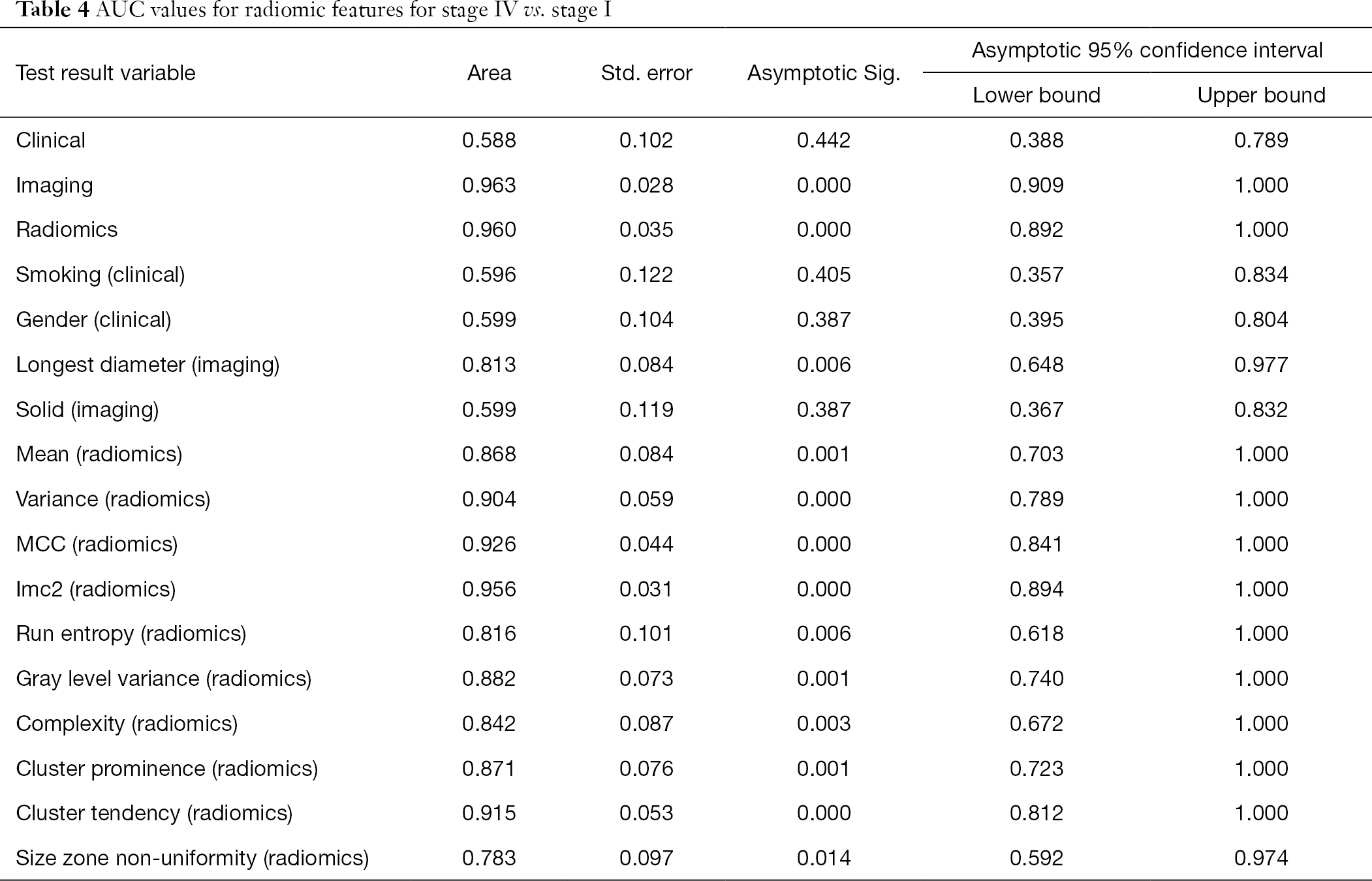 In our study, only 15% of stage IV BRAF-mutated lung cancers were T4 while most stage IV lung cancers (73%) were T1 or T2. This apparent discordance may be explained by differences in underlying tumor biology, wherein clonal mutations within a tumor population increases the propensity for metastasis. A recent study on breast cancer metastasis have shown similar findings, with a non-linear relationship between cancer size and metastasis potential (22). The authors postulate a parallel model for explaining metastases whereby at the time of original tumor presentation, a parallel process is occurring in underlying cancer stem cell populations, which confers aggressivity in the cancer cells. Under this model, there is not necessarily a stepwise progression of metastatic disease from primary cancer, to local lymph nodes, and then to distant organs. On the contrary, the potential for metastasis is an intrinsic property of the tumor stem cell population, and clonal mutations conferring aggressivity may occur early in the course of disease irrespective of local progression (6). Lending support to this model are several recent molecular studies in breast (23), pancreatic (24), melanoma (25), and colon cancer (26). Our results suggest that radiomic features of the primary lung tumors may helpful in capturing these biological differences, whether due to subtle differences in density or vascularity, which were previously beyond the scope of visual interpretation.

Advances in molecular research have established that tumors are more genetically and phenotypically unstable when compared to their normal counterparts (26,27). Furthermore, it has been established that the majority of secondary or metastatic tumors are clonal in origin (28,29). It is therefore perhaps unsurprising that we see more radiomic differences between early stage tumors and advanced stage tumors, providing further support to the notion of increased tumor heterogeneity as cancers progress along their life cycles. As tumor cells invade the stroma, multiple additional microscopic changes need to occur in the background, including angiogenesis and organization of vascular supply (30). Our results demonstrate that radiomic features can potentially tap into these features, which cannot be semantically captured during conventional image interpretation. Radiomic features can play an important role in noninvasively characterizing primary lung cancers and predict biologic aggressivity and metastatic potential.

Current cancer treatment relies on the resection of primary tumor and the prevention of metastasis, with much emphasis on distant metastasis given its direct association with mortality in patients (30). Current TNM and AJCC staging systems rely on cancer dimensions, local invasiveness, and the presence of distant metastases as an estimate of prognosis. However, since metastatic potential is likely an intrinsic characteristic of the tumor stem cells, there is a potential for radiomic features to be included in staging of tumors and prognosis.

There is a paucity of studies on the utility of radiomic features in differentiating or predicting the TMN stage of primary lung cancers. Radiomic survival analyses of NSCLC patients have previously demonstrated that entropy, skewness, mean density, roundness, and gray-level nonuniformity were most significant predictive features of progression-free survival (31,32). Other studies have found that entropy, kurtosis, range, and skewness, were significant features that can differentiate or are associated with EGFR mutation status in primary lung adenocarcinoma (15,30). More work is needed in this field to validate our findings and establish a standardized set of radiomic features to be assessed in the routine staging of lung cancers.

To our knowledge, this is the first systematic analysis of the utility of radiomic features in the assessment of different TMN stages in primary lung cancer. Only contrast-enhanced CT exams were included to assess for differential enhancement in our texture analysis, especially given the importance of angiogenesis and vascular organization in the growth and invasion of lung cancer (30). Excluding any post-treatment lung cancer patients in this study also eliminated confounders related to treatment.

Our study has several limitations, including a relatively small sample size involving a relatively rare driver mutation, BRAF. There is a question of applicability of our results to other lung cancers with different driver mutations such as EGFR and ALK. Absence of a readily available cohort of patients with other mutations precluded us from performing a comparison. We also do not have data related to treatment response and long term outcomes. Further work in a multi-institutional study with other driver mutations and correlations with treatment response and outcomes will be needed next to assess the generalizability and robustness of our results. Another limitation of our study applies to the variable CT section thickness (1–3 mm), which could affect the reproducibility of radiomic features although the distribution of different section thicknesses was even across different cancer stages. Another potential limitation is use of scanners from different vendors, that can impact the reproducibility of radiomic features, particularly of higher statistical order (33). Given the time and effort involved in lesion identification, segmentation, radiomic features extraction and analyses, it is not clear how and if radiomic features can be applied in routine clinical practice.

In conclusion, radiomic features of primary tumor on contrast-enhanced CT scans are different between early and advanced tumor stages in BRAF-mutated lung cancer. There is increased heterogeneity in terms of texture features between early and advanced tumors, a finding that is in line with current molecular conception of parallel clonal expansion of tumor cells and intrinsic metastatic potential. Radiomic features can serve as a non-invasive biomarker in the initial staging and surveillance of lung cancer, although more work is needed to confirm the validity and generalizability of these findings.

Funding: This research did not receive any specific grant from funding agencies in the public, commercial, or not-for-profit sectors.

Ethical Statement: The authors are accountable for all aspects of the work in ensuring that questions related to the accuracy or integrity of any part of the work are appropriately investigated and resolved. The study was conducted in accordance with the Declaration of Helsinki (as revised in 2013). This study was reviewed and approved by the Partners Human Research Committee (Institutional review board protocol numbers 2019P000198, 2016P000767). Informed consent was waived by the IRB due to retrospective nature of the study.