Kirsten rat sarcoma vial oncogene (KRAS), member of the RAS superfamily, is one of the most prevalent oncogenes in cancer (1). Being a GTP-binding protein that links receptor tyrosine kinase activation to intracellular signalling, KRAS mutations favour the GTP-bound active state and constitutive activation of downstream effects including differentiation, proliferation and survival. Presence of KRAS mutations have been shown to be a negative prognostic factor in multiple cancer types including lung and colorectal cancers (2-5). In addition, presence of KRAS mutations is a predictive biomarker for EGFR-directed monoclonal antibodies in patients with colorectal cancer.

The most frequent mutations of KRAS occur at codon 12 (6), but the incidence of specific missense mutation at codon 12 are variable among different cancer types. For example, in non-small cell lung cancers (NSCLC), the most common KRAS mutation is G12C, whereas G12D is more common in pancreatic cancer (7,8). Incidence of KRAS mutations also differs between ethnic groups. Specifically, less than 10% of Asian patients with advanced NSCLC harbor KRAS mutation (9-11), while the incidence of KRAS mutations in African-Americans and Caucasians is 19% and 26%, respectively (12). Moreover, distribution of KRAS subtypes also varies between ethnic populations. Prior reports have shown KRAS G12C as the most common subtype amongst in African Americans (38%) and Caucasians (38%). A smaller cohort study of 218 KRAS Chinese NSCLC patients also reported G12C being the most common subtype, accounting for 32.1% of all KRAS mutations (9,12). Other reports have illustrated distinct subtypes of KRAS mutations between smokers and never smokers (13).

Recent report of a phase I study on AMG 510 is promising. This novel, first-in-class, small molecule specifically inhibits KRAS G12C by locking it in an inactive GDP-bound state (14,15). Tumor response rate in 23 patients with KRAS G12C positive NSCLC was 48% (16). Based on these preliminary results, the United States Food & Drug Administration has granted “fast-track” designation for AMG 510 (17). Moreover, other KRAS G12C specific inhibitors, including MRTX849 have also had promising initial early phase clinical trials data presented at international meetings (18). For future development of this class of agents, it is crucial to understand the comprehensive landscape of KRAS GI2C mutation across different tumor types, ethnicities and tobacco exposure. As RAS/RTK is a complex signalling pathway, co-existing genomic aberrations may impact on the clinical outcomes of KRAS G12C inhibition. In this study, we aim to study the epidemiologic landscape of KRAS G12C mutation in multiple cancer types in a large Chinese population and correlate the incidence of mutation with tobacco exposure in patients with NSCLC. Furthermore, we have also investigated the incidence of concomitant aberrations that may potentially impact on KRAS G12C inhibition. We present the following article in accordance with the STROBE reporting checklist (Available at http://dx.doi.org/10.21037/tlcr-20-455).

Total of 11,951 formalin-fixed, paraffin-embedded (FFPE) tumor tissue samples collected between 11/2016 and 7/2019 were analysed by next generation sequencing (NGS) (OrigiMed Ltd, Shanghai, China). This CAP-/CLIA-Accredited Laboratory offered three different types of gene panels commercially, all of which have all known coding exons of KRAS included in their analysis. For analysing concomitant aberrations, data from KRAS G12C samples were analysed, which were sequenced with Cancer Sequencing YS panel, a validated customized panel targeting over 450 cancer-related genes (19). All tumor samples were reviewed by in-house pathologists and only samples with 20% or more of tumor-cells cellularity were accepted for analysis. Smoking status and clinical characterization were available for 2,223 lung cancer cases within this cohort. Informed consent on plans of further deidentified genomic data analysis were obtained from all patients by test-ordering physicians as part of standard practice at respective institutions.

In order to obtain more representative data, only in diseases of which more than 100 samples have been received during the recruitment period are studied in this report.

All procedures performed in this study were in accordance with the Declaration of Helsinki (as revised in 2013). Due to its multi-institutional, anonymized and retrospective nature of data collection, in conjunction with subjects recruited in this study have already acknowledged and confirmed informed consent in proceeding with genomic testing and for the relevant anonymized used for further studies, ethical approval for this specific study has been waived.

Sequencing and detection of genomic alterations

Four levels of evidence defined by MSK-Precision Oncology Knowledge base (OncoKB; https://oncokb.org/), were used to categorize potentially actionable alterations. Mutational events of each individual were annotated according to the OncoKB criteria. 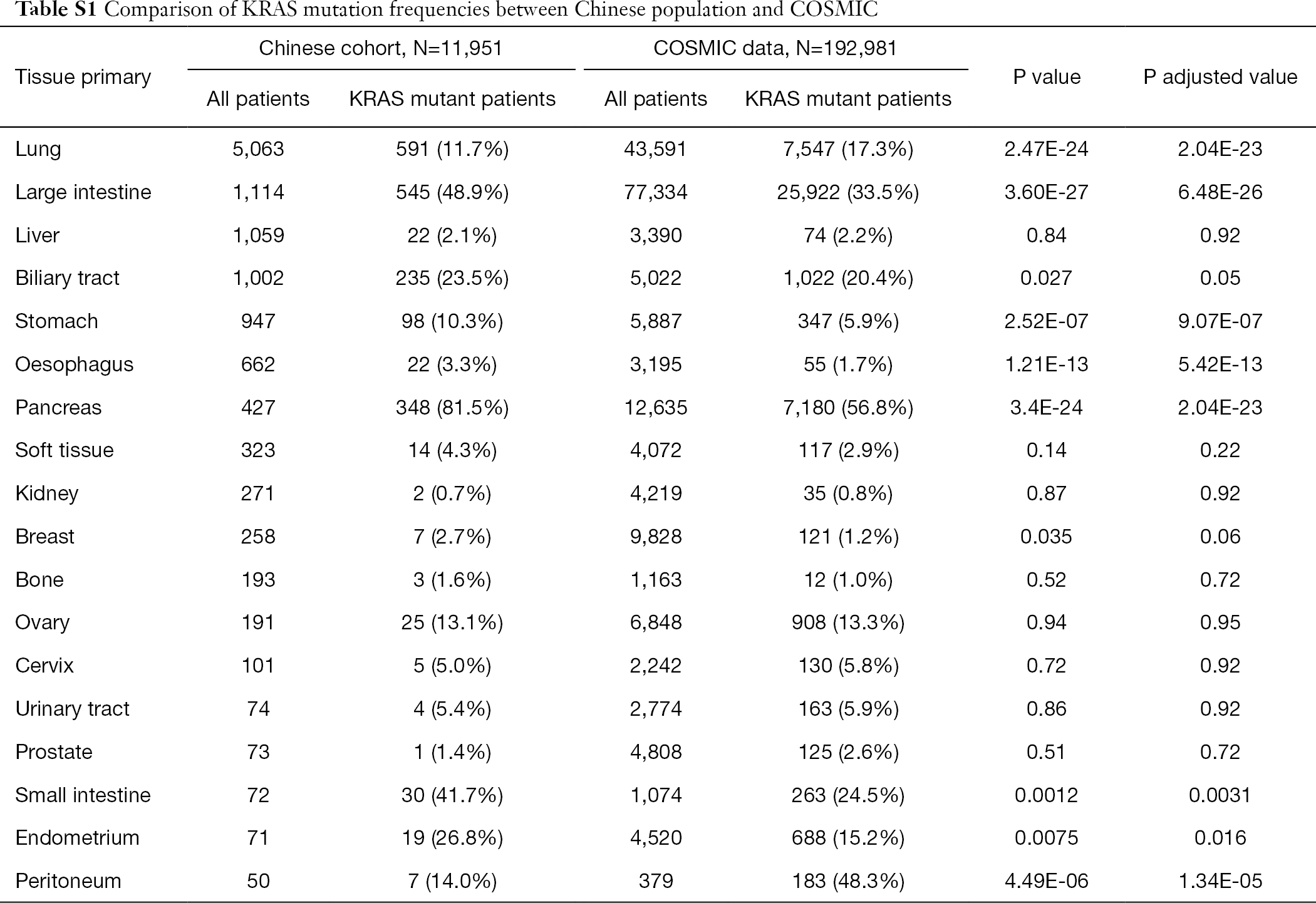 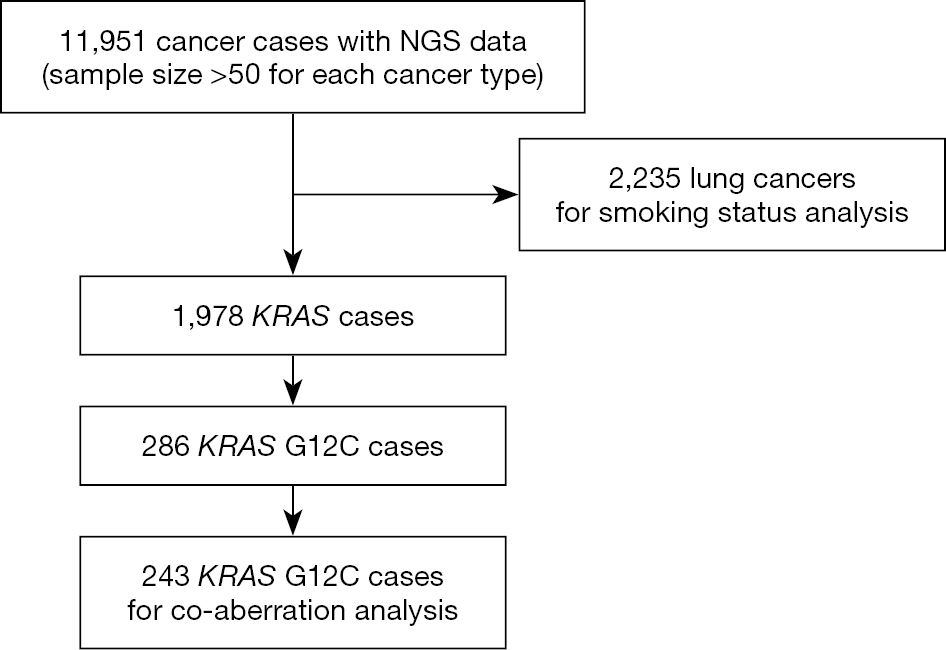 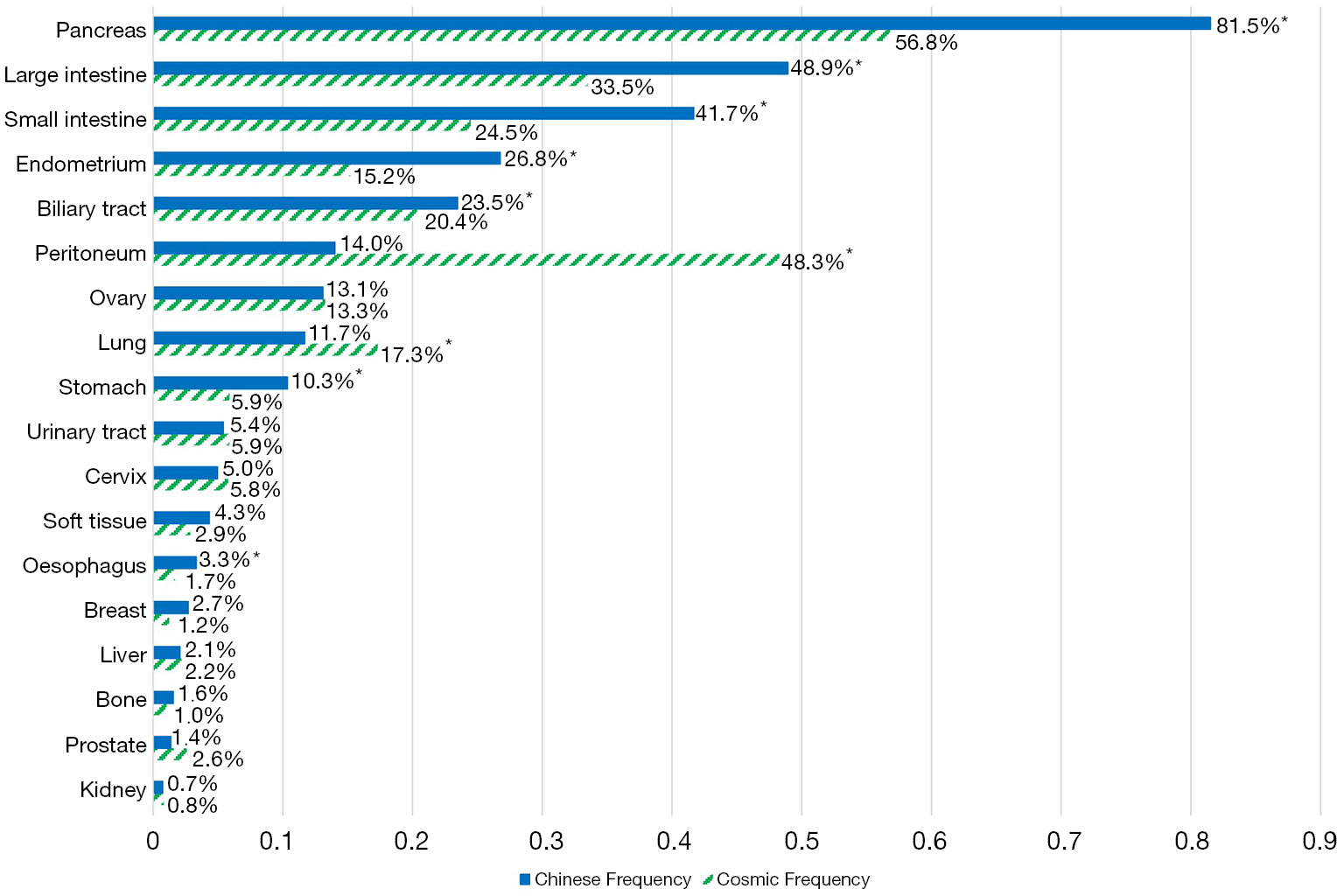 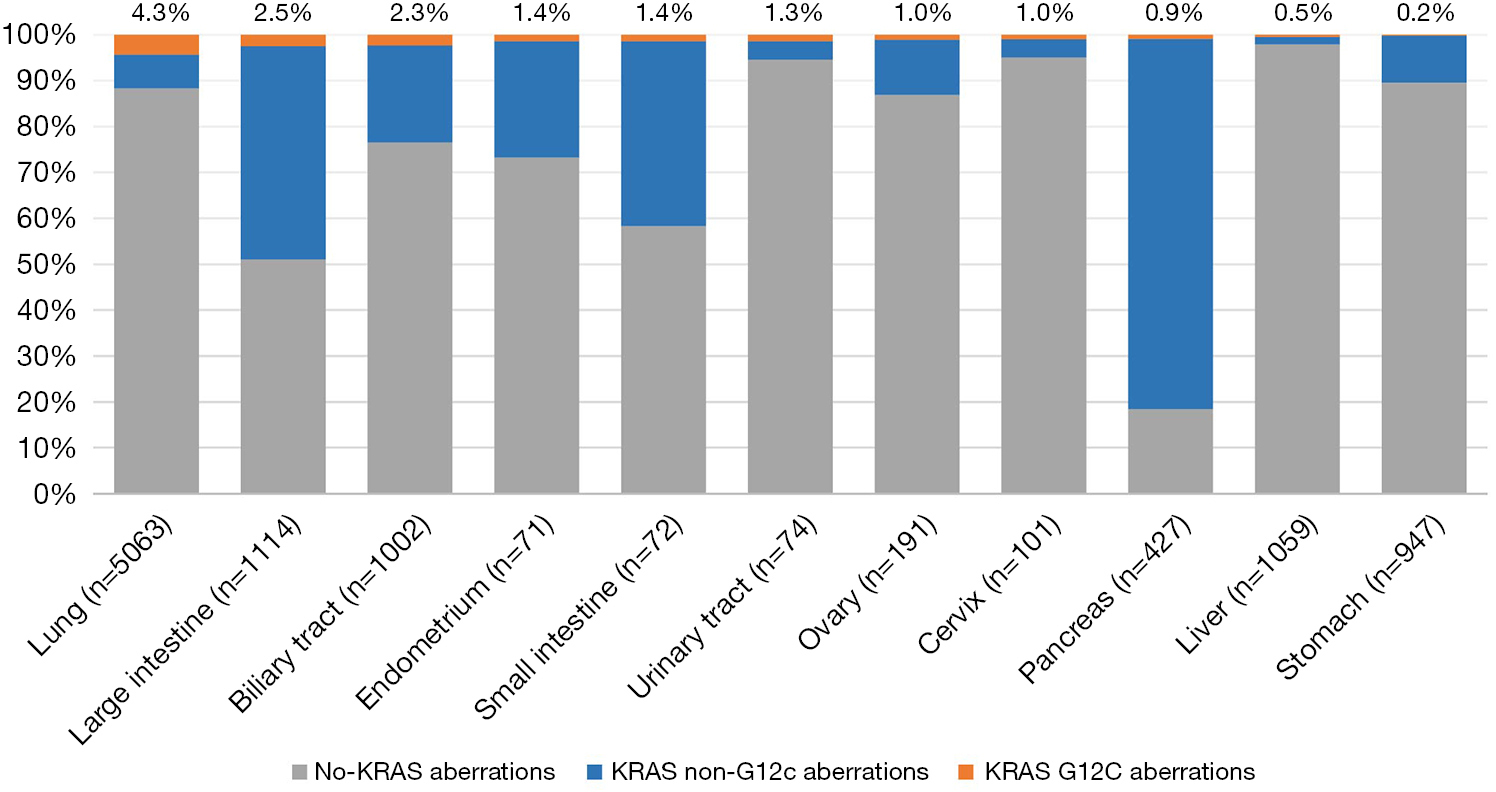 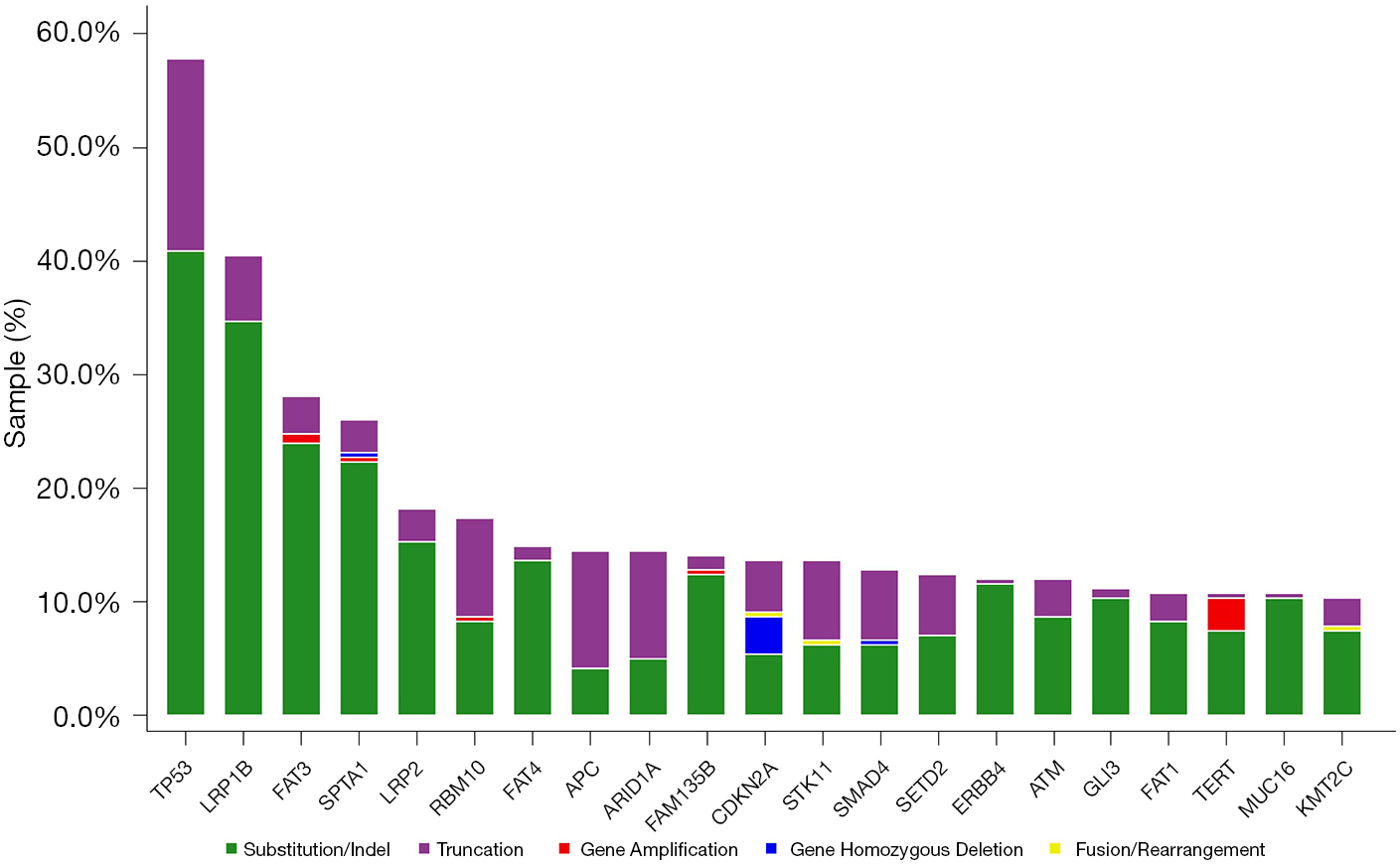 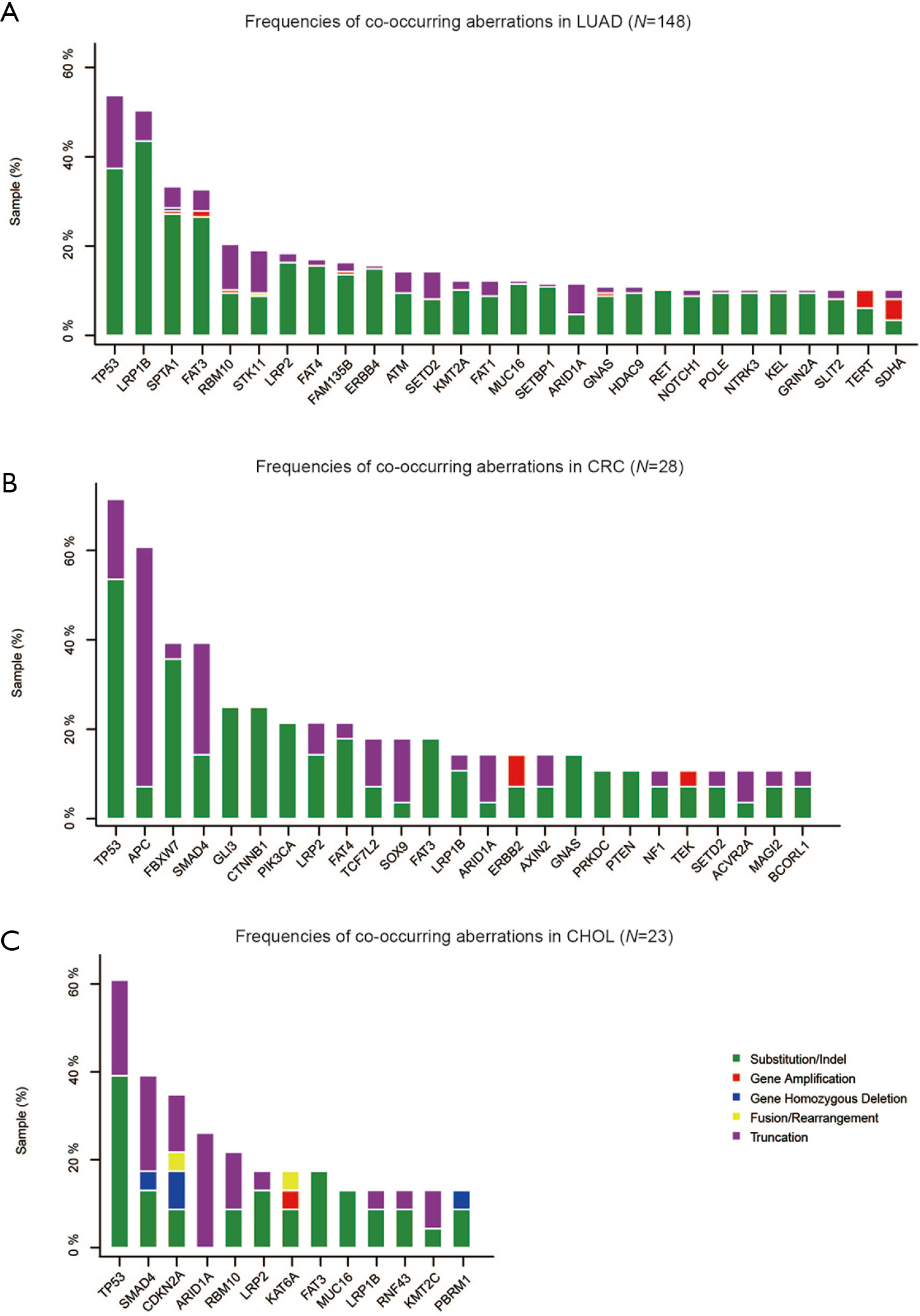 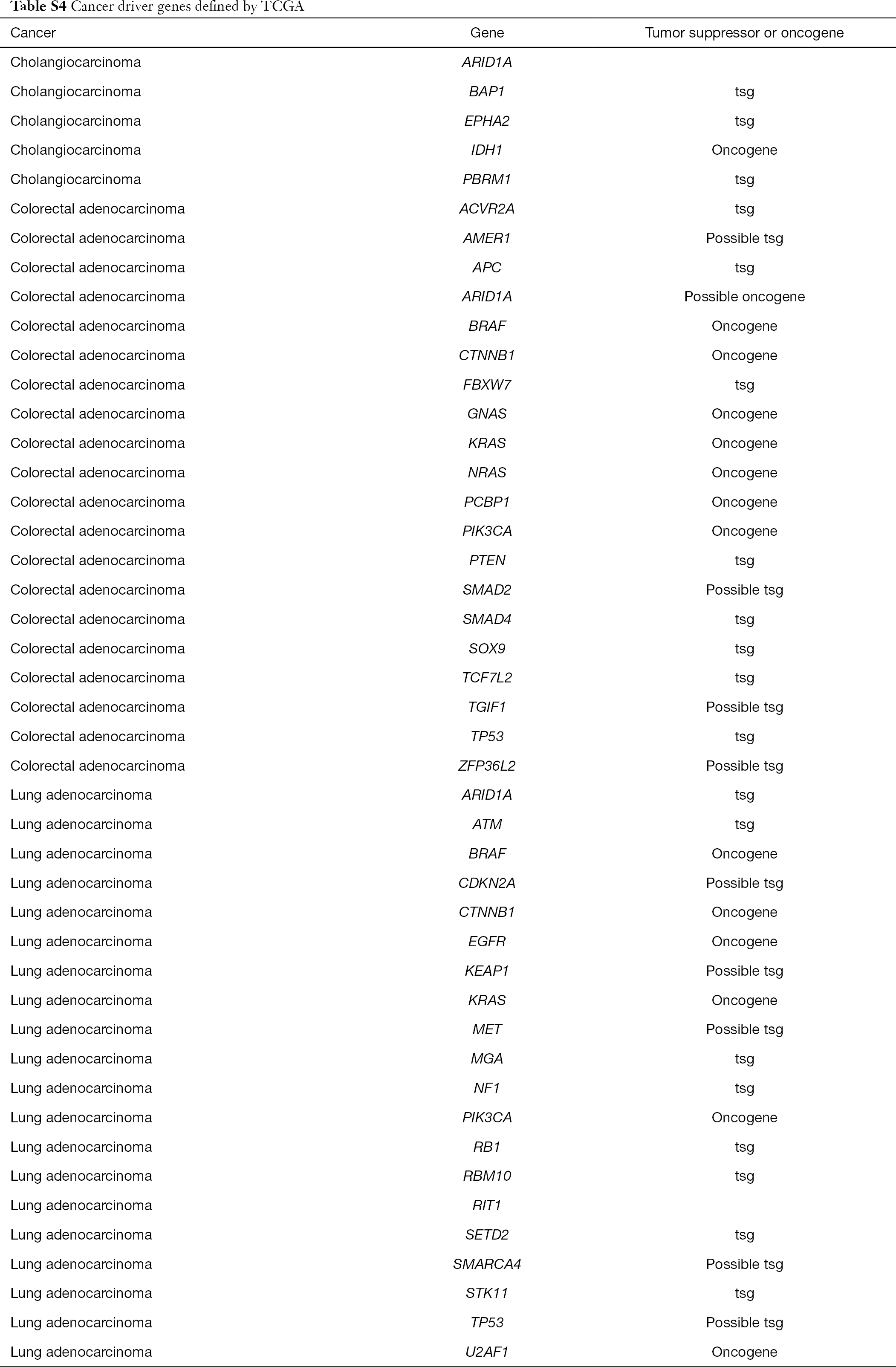 Smoking history of 2,235 lung cancer cases was collected. This included 1,582 LUAD and 305 squamous cell carcinoma histologies (Table 1). In LUAD, KRAS mutations were identified in 20.3% of former smokers, which were significantly higher than that of non-smokers (8.9%; P<0.001; Table 1). And in 20.7% of current smokers, significantly higher than non-smokers (P<0.001). On the contrary, smoking history did not play a significant role in the incidence of KRAS mutations in patients with lung squamous cell carcinomas (LUSC). Further details on KRAS mutation subtypes and respective correlation with smoking status were illustrated in Table S5. 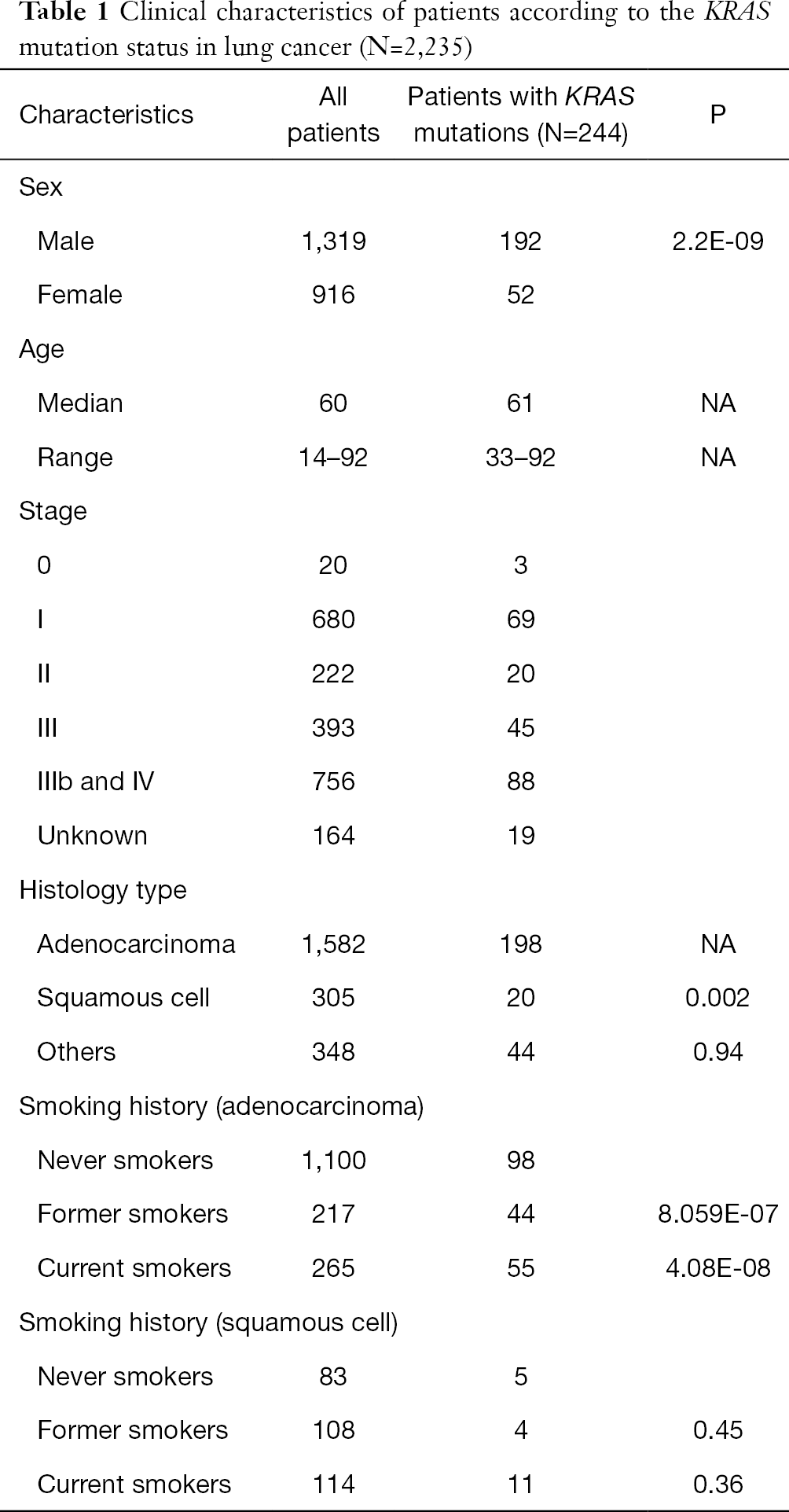 Most of these identified genes function upstream of the KRAS pathway, while several downstream signalling molecules were also observed (Figure 7A). Concomitant non-G12C KRAS mutations were observed in LUAD and CRC, occurred in 6.8% and 3.8% respectively. Preclinical data showed that PI3K-AKT pathway inactivation was likely intrinsic resistance mechanism for G12C inhibitors (25). BRAF mutations would provide fitness advantage for subclones resistant to G12C inhibition (26). Associated genes on the pathway were analysed in LUAD and CRC. BRAF is on the downstream of KRAS in RTK/RAS pathway. The incidence of BRAF mutation in G12C mutated patients were comparable between LUAD and CRC, occurring in 5.4% and 3.6% patients respectively (P=0.9; Figure 7A). PI3K pathway is downstream signalling of RAS. In this study, a higher proportion of PI3KCA mutation was observed in CRC (21.4% vs. 8.8%; P=0.04; Figure 7B). 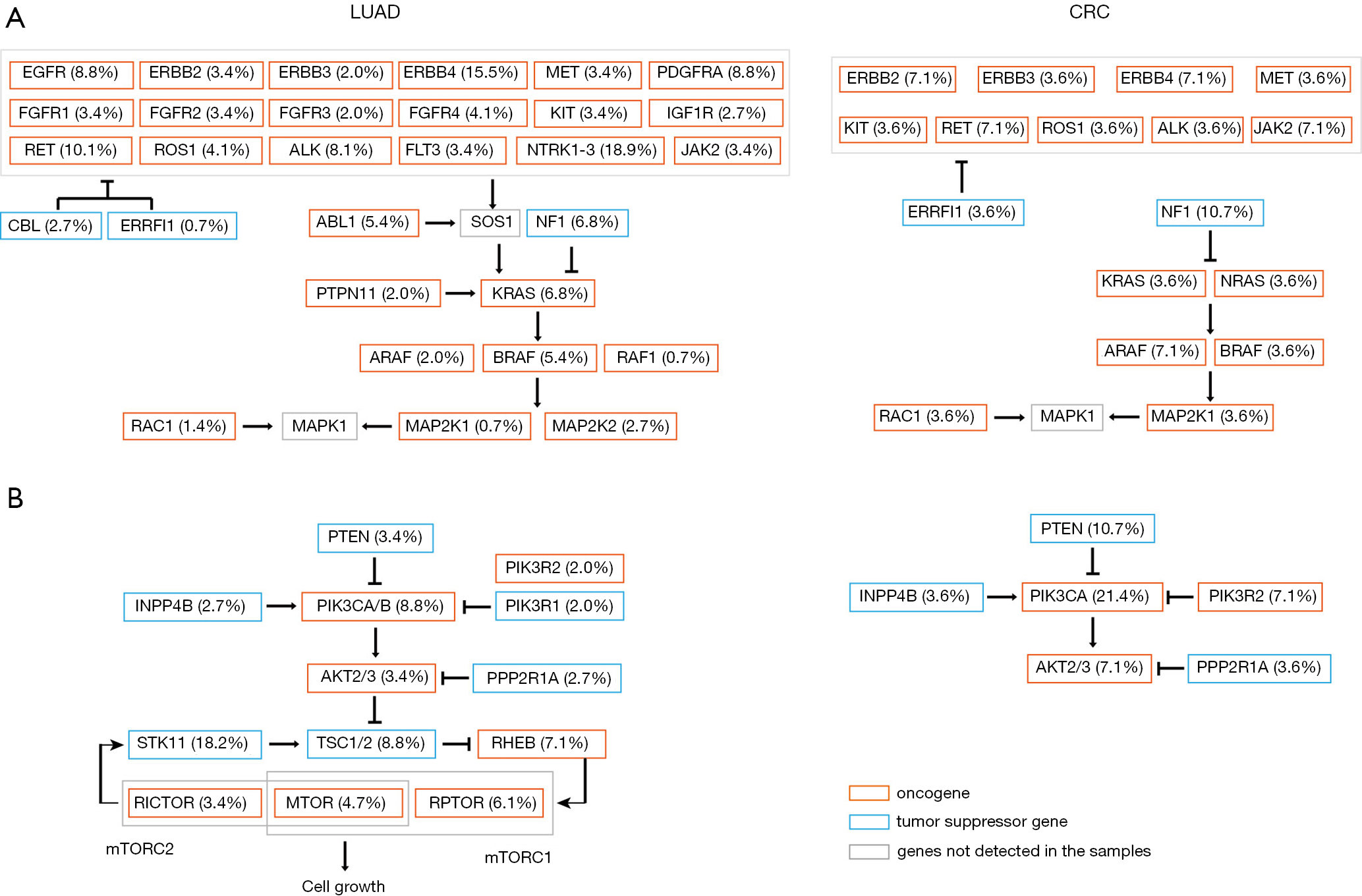 Potential actionable co-alterations were analysed as defined by the OncoKB classification (27). Level 1 actionable alteration was found only in LUAD (Table 2). In G12C LUAD cases (Figure S3A), 81 (54.7%) cases had at least one potentially actionable alteration in addition to KRAS G12C (level 1 to 4). Actionable EGFR and ALK mutations were identified in eight cases (5.4%), which were recognized as FDA-approved biomarkers for target therapies (level 1). Other cases can also be potentially targetable either with off-label drugs or therapies that are currently in clinical trials (level 2B to 4). In colorectal carcinomas (Figure S3B), 16 were potentially targetable (57.1%; level 2B to 4). In total, 52.3% of G12C patients with co-aberrations had at least one actionable alteration. 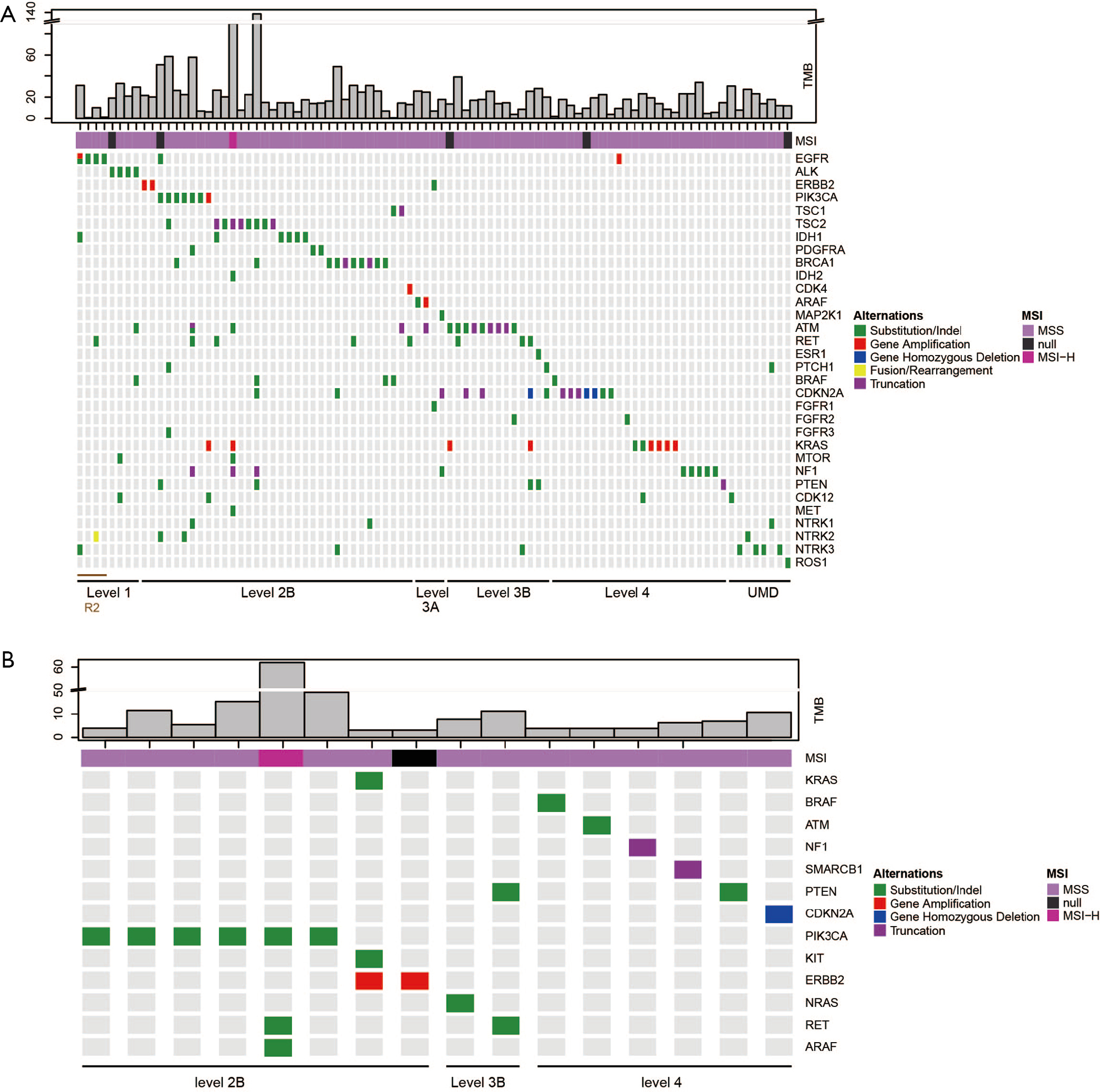 Recent discoveries have provided promising therapeutic opportunities for patients harboring KRAS G12C mutations. To the best of our knowledge, our report is the largest single-cohort illustrating the genomic and epidemiological landscape of KRAS G12C mutations in cancer. Moreover, this dataset represents the largest cohort of Chinese cancer patients with tumors harboring KRAS mutations ever assembled.

Higher frequencies of KRAS mutation were observed in several common cancers, including colorectal, stomach and pancreatic cancer in our study than reported in COSMIC, most of which were data from western population. This discrepancy may possibly be due to the higher resolution technology being used in our study which mean that mutations with low variation frequency (VAF) were also detectable. In the current study, the full exon of KRAS was detected using NGS with a mean coverage of at least 700×, at minimal VAF of 1% could be detected in this study.

On the contrary, the frequency of KRAS mutations were lower in our Chinese lung cancer cohort when compared with Western series. Similar findings have been reported in prior studies of Chinese populations (9,20). The imbalance of prevalence of molecular drivers in LUAD between Asian and Caucasian populations has been well documented. Given the fact that EGFR mutations are more common in Asians, it is not inconceivable that the relative prevalence of other molecular drivers, including KRAS mutations, are altered. The lower proportion of KRAS mutations in Asian LUADs in general may explain the overall lower frequency of KRAS G12C compared with previous reports among Western populations in lung cancer (7,28). In colorectal and pancreatic cancer patients, the frequencies of KRAS G12C were comparable with prior reports (29,30). Interestingly, 2.3% of biliary tract cancer patients were observed with KRAS G12C in our dataset. This information on the molecular landscape of KRAS G12C mutations may have significant impact on operational aspects in conducting clinical trials with KRAS G12C specific inhibitors in the Chinese population.

Moreover, presence of possible co-occurrence of other aberrations aside from KRAS G12C were evaluated in all patients within this study. The frequencies of co-altered genes were different in cancers. This has provided us with valuable insight in identifying potential pathways of treatment resistance in patients who are to be treated with KRAS G12C specific inhibitors, as the mechanism of resistance to these inhibitors may have already been established de-novo.

The presence of KRAS mutation suggests lack of response to EGFR targeted therapies in non-small lung cancers and colorectal cancers (31,32). As KRAS downstream of EGFR in the RAS/RTK pathway, there may be potential to consider combination therapies in the rare patients who harbor both of these alterations, or develop KRAS mutations in tumors as secondary resistance to EGFR inhibitors. 52.3% of patients with co-aberrations had at least one actionable alteration in accordance to the OncoKB definition, only 3.3% of these patients had level 1 co-aberrations which were targetable by FDA-approved therapies.

Preliminary data on AMG 510 showed clinical efficacy on KRAS G12C mutated NSCLC but not CRC. This might be intrinsic mechanism underlying the difference. Although the genomic mechanisms of intrinsic resistance to kinase inhibitors are complicated, there are usually two categories. One is the secondary mutation on the targeting kinase, second is activation of other molecules on the downstream of the pathway. In the current study, aberrant RAS/RTK pathway were broadly observed in KRAS G12C tumors. Downstream genomic alterations, such as RAFs and PI3Ks alterations, may increase the risk of drug resistance to KRAS G12C inhibitors. This is in line with a recent study which demonstrated the presence of BRAF mutations leading to primary resistance to G12C inhibitors (26). Preclinical study is also supportive of the observation of PI3K-AKT as reason of intrinsic resistance to G12C inhibitors (25). The fact that we observed high incidence of PI3KCA mutation in patients with CRC may potentially explain the lack of response in this patient group. Considering the genomic difference between populations in study, further investigations are still needed.

This is a retrospective analysis of Real-World data based on a commercial platform; thus, we have limited clinical information from original source documents. Information pertaining to patients’ demographics and clinical information were based on the test request form. We are limited by the lack survival outcomes for correlation with the mutation status. However, the large sample collection on a relatively homogenous ethnic population by an identical platform has provided us with valuable and important data for further investigations. It will be extremely challenging to conduct a perspective study with similar sample size. But considering the relative rarity of KRAS G12C mutation, a large sample size is mandatory for accurate evaluation.

Our study has demonstrated the genomic landscape of KRAS G12C mutations in a large Chinese population and we confirmed the incidence to be relatively low. The most common tumor types harboring the mutation are lung, colorectal and biliary cancer.

Reporting Checklist: The authors have completed the STROBE reporting checklist. Available at http://dx.doi.org/10.21037/tlcr-20-455

Ethical Statement: The authors are accountable for all aspects of the work in ensuring that questions related to the accuracy or integrity of any part of the work are appropriately investigated and resolved. All procedures performed in this study were in accordance with the Declaration of Helsinki (as revised in 2013). Due to its multi-institutional, anonymized and retrospective nature of data collection, in conjunction with subjects recruited in this study have already acknowledged and confirmed informed consent in proceeding with genomic testing and for the relevant anonymized used for further studies, ethical approval for this specific study has been waived.