Locally advanced non-small cell lung cancer (NSCLC) (stage III) accounts for approximately 20–25% of patients with NSCLC at diagnosis (1). The main progress of the treatment for NSCLC includes immunotherapy and targeted therapy. Historically, the standard treatment for patients with unresectable locally advanced NSCLC (LA-NSCLC) was platinum-based concurrent chemoradiotherapy (2). However, prognosis has been poor, with a 5-year overall survival (OS) rate ranging from 15% to 25%, and the median OS time only 17–24 months (3,4). Durvalumab, an anti-programmed death ligand 1 (PD-L1) antibody, has been used in patients who have completed concurrent chemoradiation for inoperable LA-NSCLC. The immunotherapy after concurrent chemoradiation has been shown to significantly increase the tumor response rate, progression-free survival, and OS (5). Currently, durvalumab has become standard treatment for inoperable LA-NSCLC. The 2019 American Society of Clinical Oncology (ASCO) Annual Conference, revealed that the 36-month OS rate was 57% in patients who received durvalumab as consolidation therapy after concurrent chemoradiation (6). Therefore, studying changes in inflammatory biomarkers during concurrent chemoradiation might be useful for optimizing the implementation of radiotherapy (RT) in the immunotherapy era.

Emerging evidence has indicated that systemic inflammation plays a vital role in the development and progression of many solid tumors (7,8). The systemic inflammation, as determined by parameters such as lymphocytes, neutrophil-to-lymphocyte ratio (NLR), and platelet-to-lymphocyte ratio (PLR), correlate with prognosis in many malignancies, including NSCLC (9-13). For example, in lung cancer, elevated pretreatment NLR and PLR are associated with poor survival in patients with advanced NSCLC, especially for unresectable patients (14). However, there are relatively few studies on the correlation between the dynamic changes of these prognostic biomarkers and clinical outcomes.

In this retrospective study, we present our investigation of patients with LA-NSCLC who received definitive radiation, and the impact of NLR and PLR during treatment on clinical outcomes. We further investigated the correlation between heart dose, MBD, NLR, and PLR during treatment. We present the following article in accordance with the STROBE reporting checklist (available at http://dx.doi.org/10.21037/tlcr-20-831).

NSCLC patients treated with definitive RT with or without chemotherapy from 2012 to 2016 at Shanghai Chest Hospital were retrospectively reviewed. Inclusion criteria included: pathologic confirmation of NSCLC with clinical stage III disease according to the TNM criteria of NSCLC (Union for International Cancer Control, eighth edition), receipt of a total radiation dose of at least 50 Gy, documentation of RT dosimetric data and pretreatment and 1-month post-RT start complete blood counts (CBCs) (defined as the blood count obtained one month after the RT start). Exclusion criteria consisted of receipt of epidermal growth factor receptor tyrosine kinase inhibitor (EGFR-TKI) or anaplastic lymphoma kinase tyrosine kinase inhibitor (ALK-TKI) as neoadjuvant or adjuvant therapy for RT, having an autoimmune disease, dying within 4 weeks after completion of RT.

Patient characteristics and CBCs data were obtained from electronic medical records. RT dose, GTV, MBD, heart, and lung dose were collected directly from the treatment plans for the patients. Variables from blood count included absolute lymphocyte count (ALC), NLR, and PLR. The most recent blood count before the initial point of commencement of definitive treatment (RT, chemotherapy, or both) was defined as baseline count. The 1-month post-RT count was defined as RT count obtained one month after the completion of RT. The NLR was calculated by dividing the absolute neutrophil count by the ALC (NLR = absolute neutrophil count/absolute lymphocyte count), and the PLR was calculated as the absolute platelet count divided by the ALC (PLR = absolute platelet count/absolute lymphocyte count). The ALCmin was defined as the minimum ALC during treatment.

Follow-up data was obtained retrospectively through the electronic medical records according to the standard practice of the disease. After treatment, patients were followed up every 3 months for the first 2 years, every 6 months from 3 to 5 years, and after that annually. The physician follow-up included clinical assessments, thoracic computed tomography (CT) scans, abdomen B-ultrasound examination, and other examinations as needed. Additional imaging, including brain magnetic resonance imaging (MRI), was obtained based on symptoms. The time of subsequent EGFR-TKI or ALK-TKI therapy for patients with the progressive disease was recorded. Patient follow-up was updated and censored on September 12, 2019.

All procedures performed in this study involving human participants were in accordance with the Declaration of Helsinki (as revised in 2013). The study was approved by the institutional review board of Shanghai Chest Hospital (No. KS1716). Because of the study’s retrospective nature, the need for written informed consent was waived.

Records for a total of 436 patients with locally advanced NSCLC received a total radiation dose of at least 50 Gy were identified for this study. Of these patients, 41 were excluded from receiving EGFR-TKI or ALK-TKI as neoadjuvant or adjuvant therapy for RT. Of the remaining 395 patients, 279 patients had both pretreatment and 1-month post-RT start CBCs. Then 35 patients were excluded owing to the loss of documentation of RT dosimetric data. Finally, 244 patients were included in this study. Baseline characteristics of the patient, tumor, and treatment are listed in Table 1. The majority of patients were male (87%) with squamous cell carcinoma (59%). Tumors were most often T2 (39%), with N2 (64%) nodal status. The prescribed radiation dose exceeding or equal to 60 Gy was used in 206 (84%) patients. Chemotherapy was given either sequentially or concurrently with RT in 233 (95%) patients. Eleven (5%) patients were treated with RT alone due to comorbidities or patient refusal. A total of 115 (47%) patients received concurrent chemoradiation, and sequential chemoradiation was used in 118 (48%) patients. The median follow-up time for all patients was 15.5 months (range, 1.9–83.5 months), while for patients who did not experience an event, it was 42.4 months (range, 2.3–81.3 months). The estimated median OS was 15.8 months (95% CI: 13.9–17.7 months), and the estimated PFS was 8.6 months (95% CI: 7.1–10.0 months). 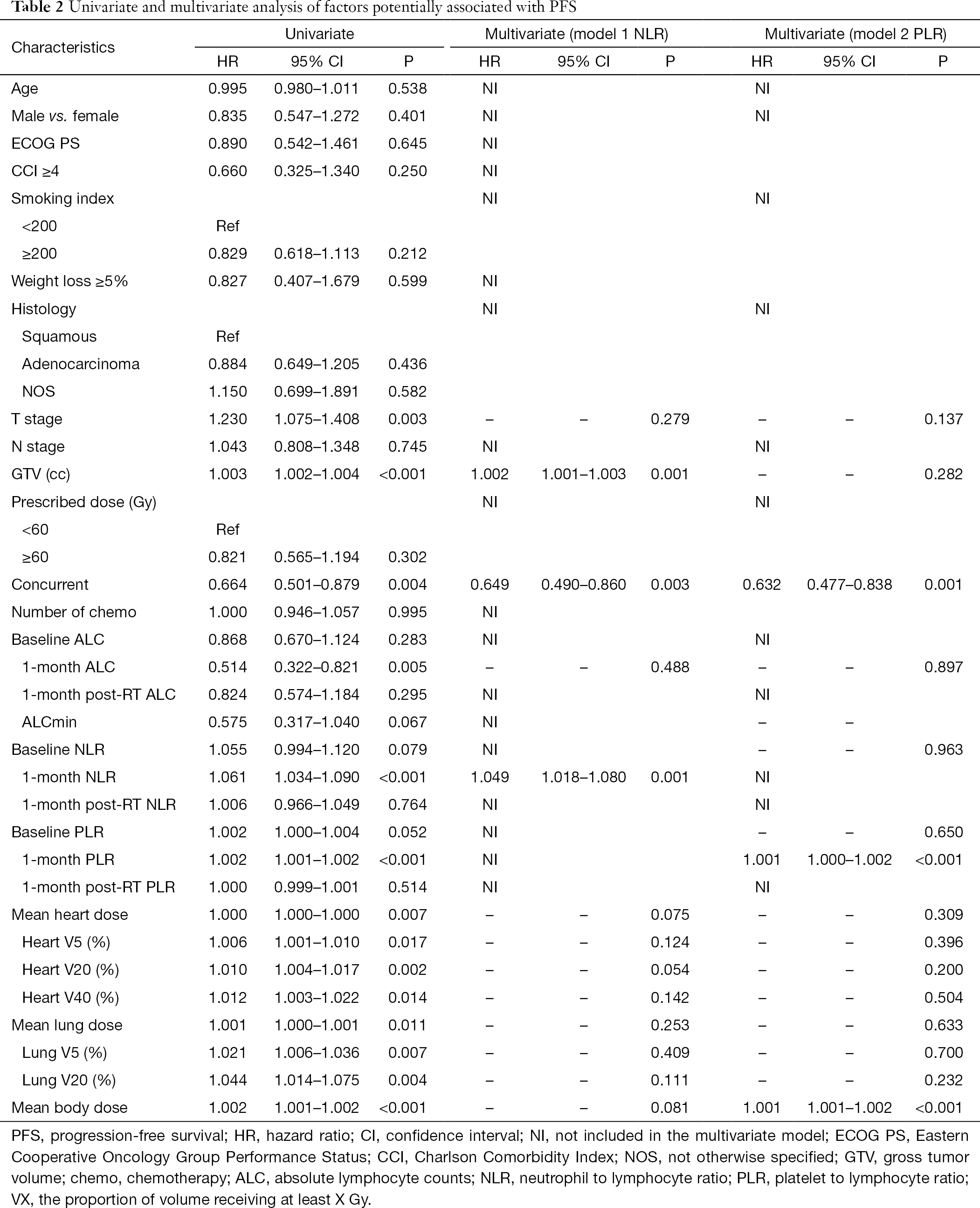 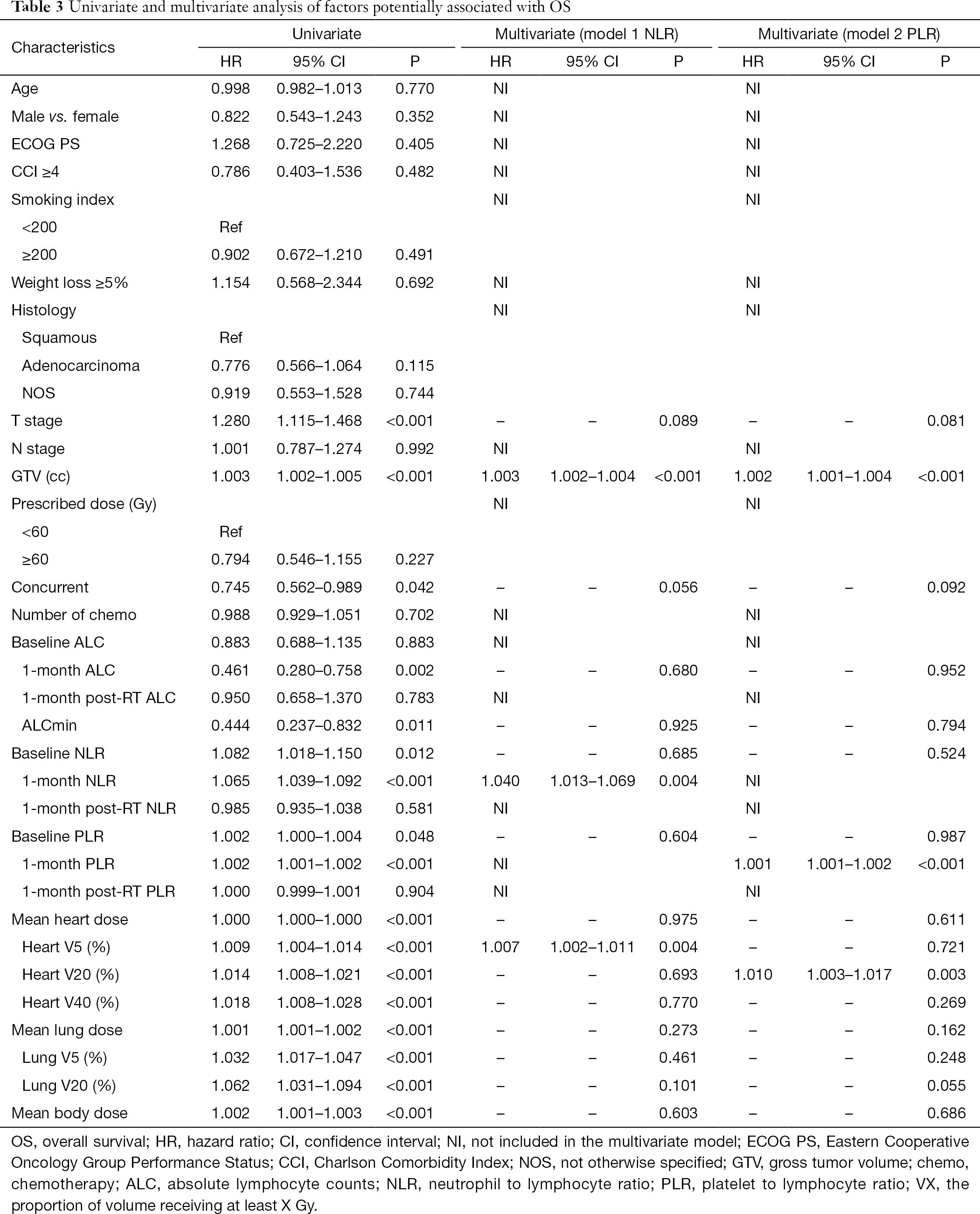 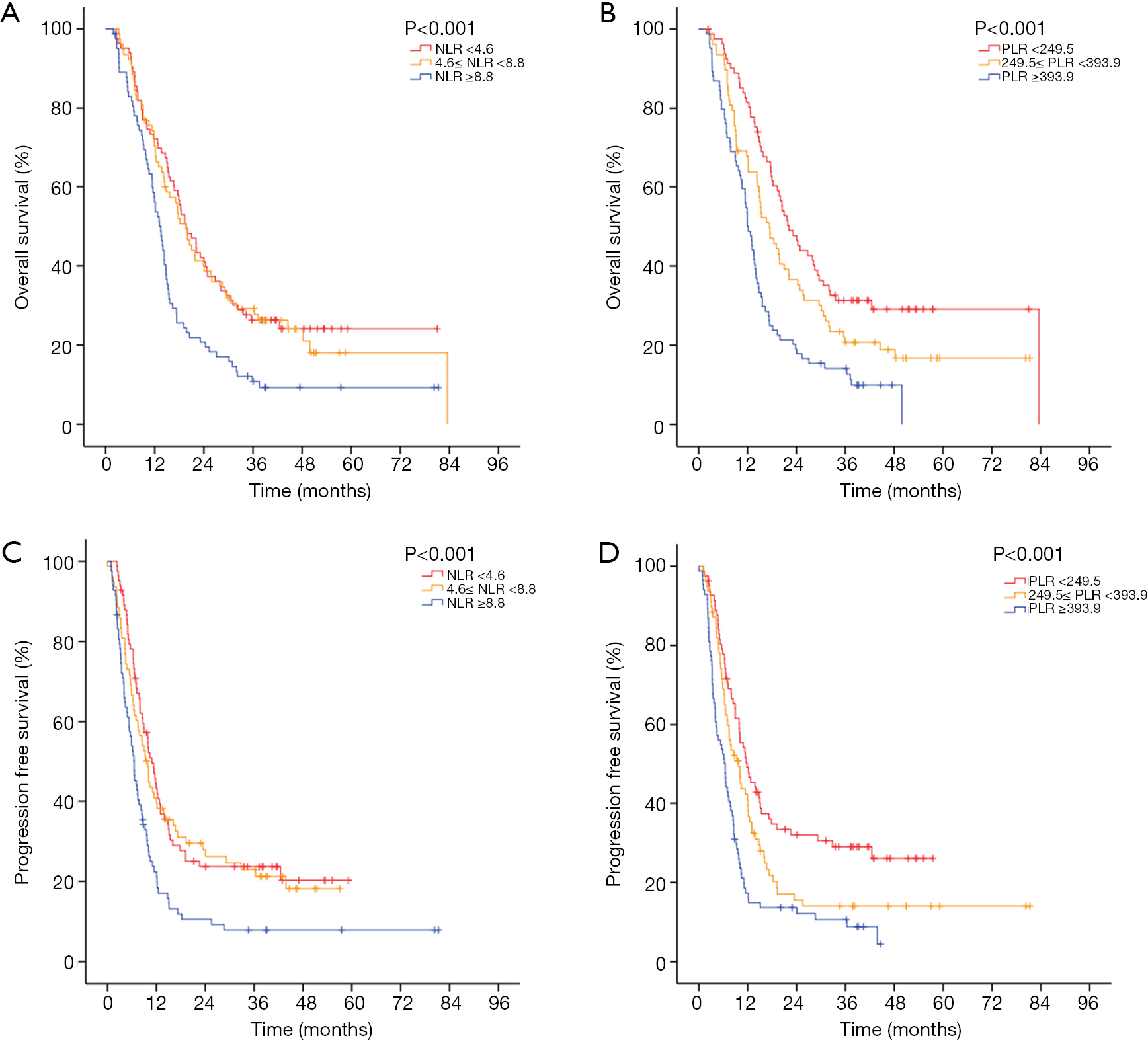 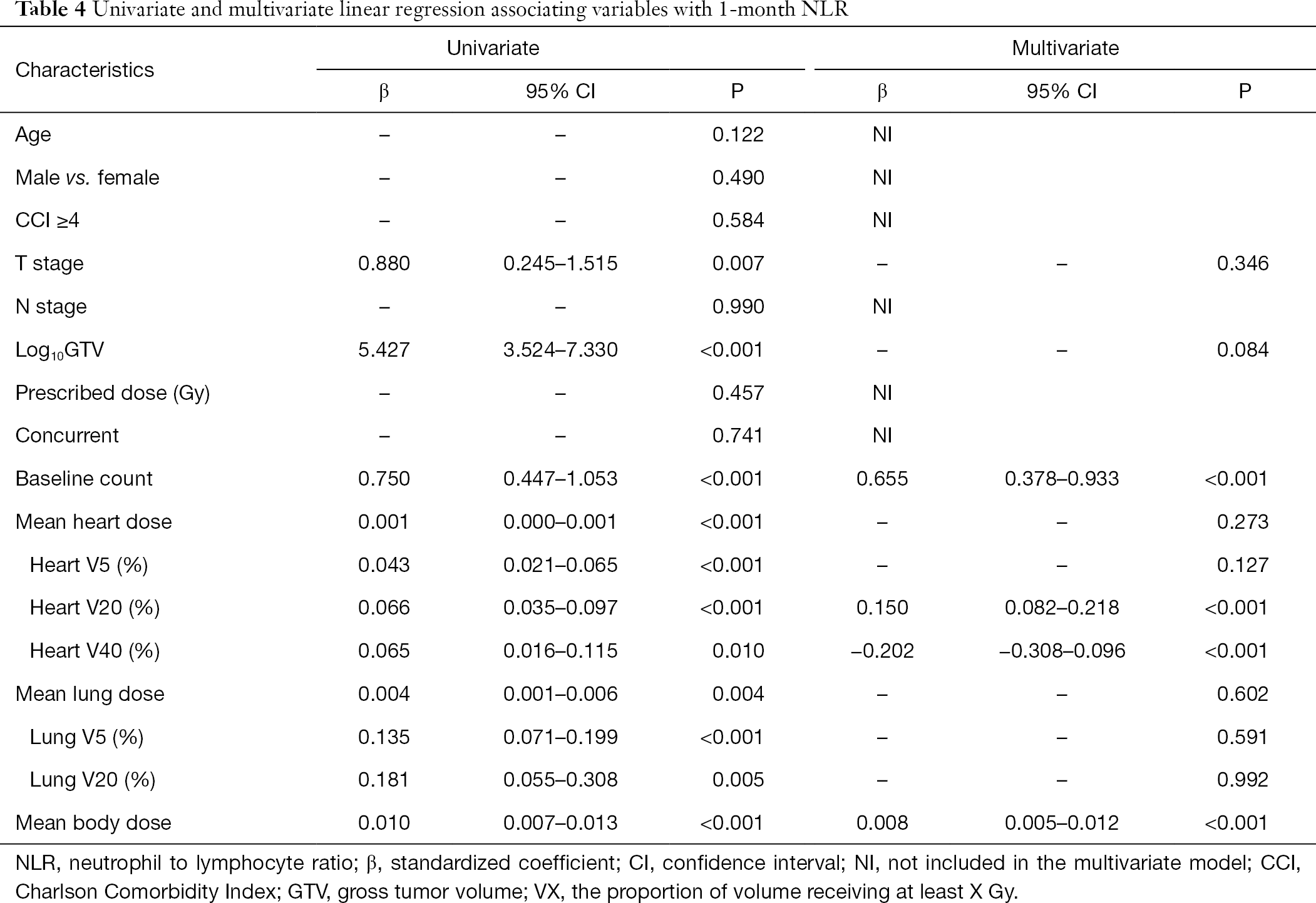 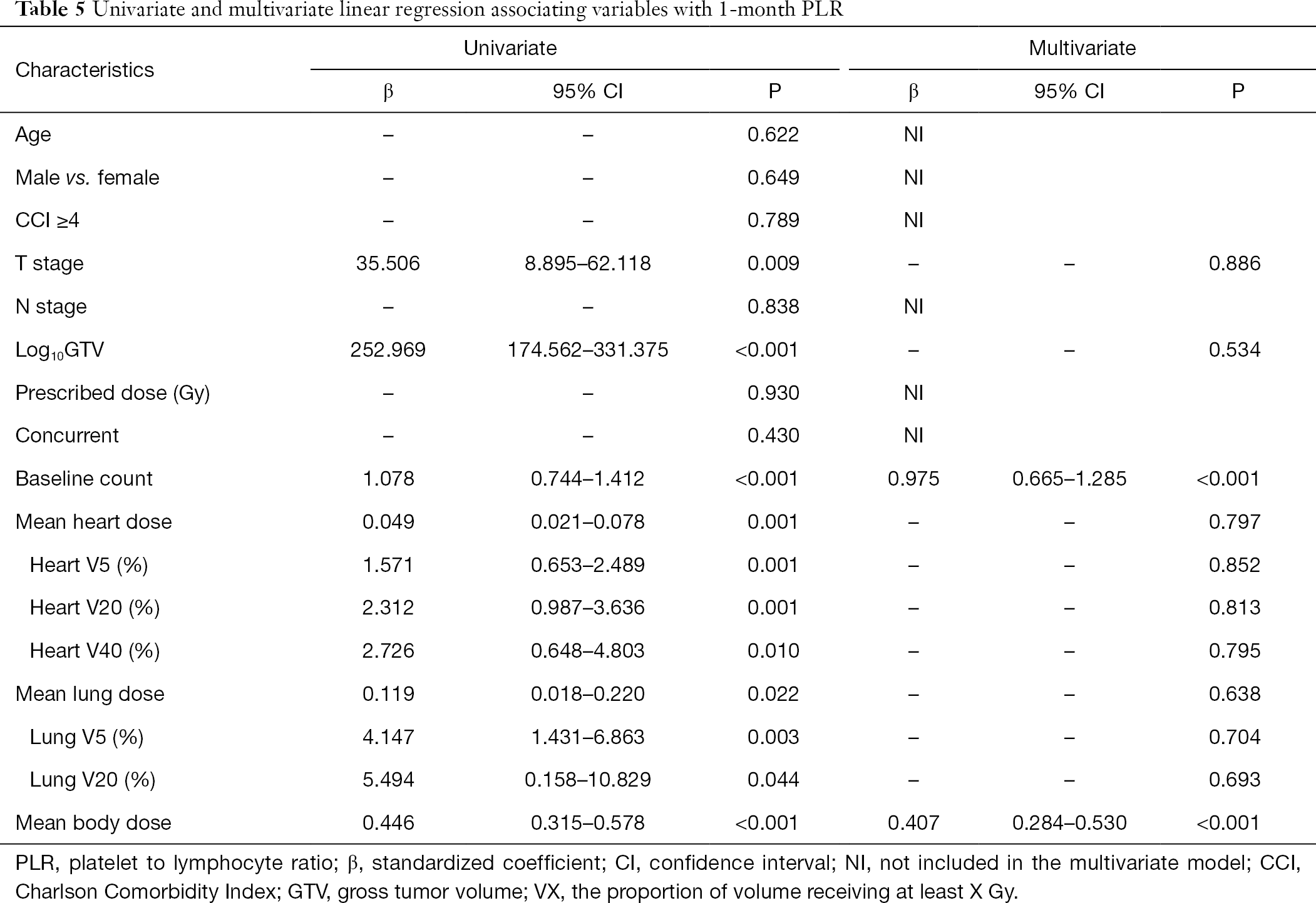 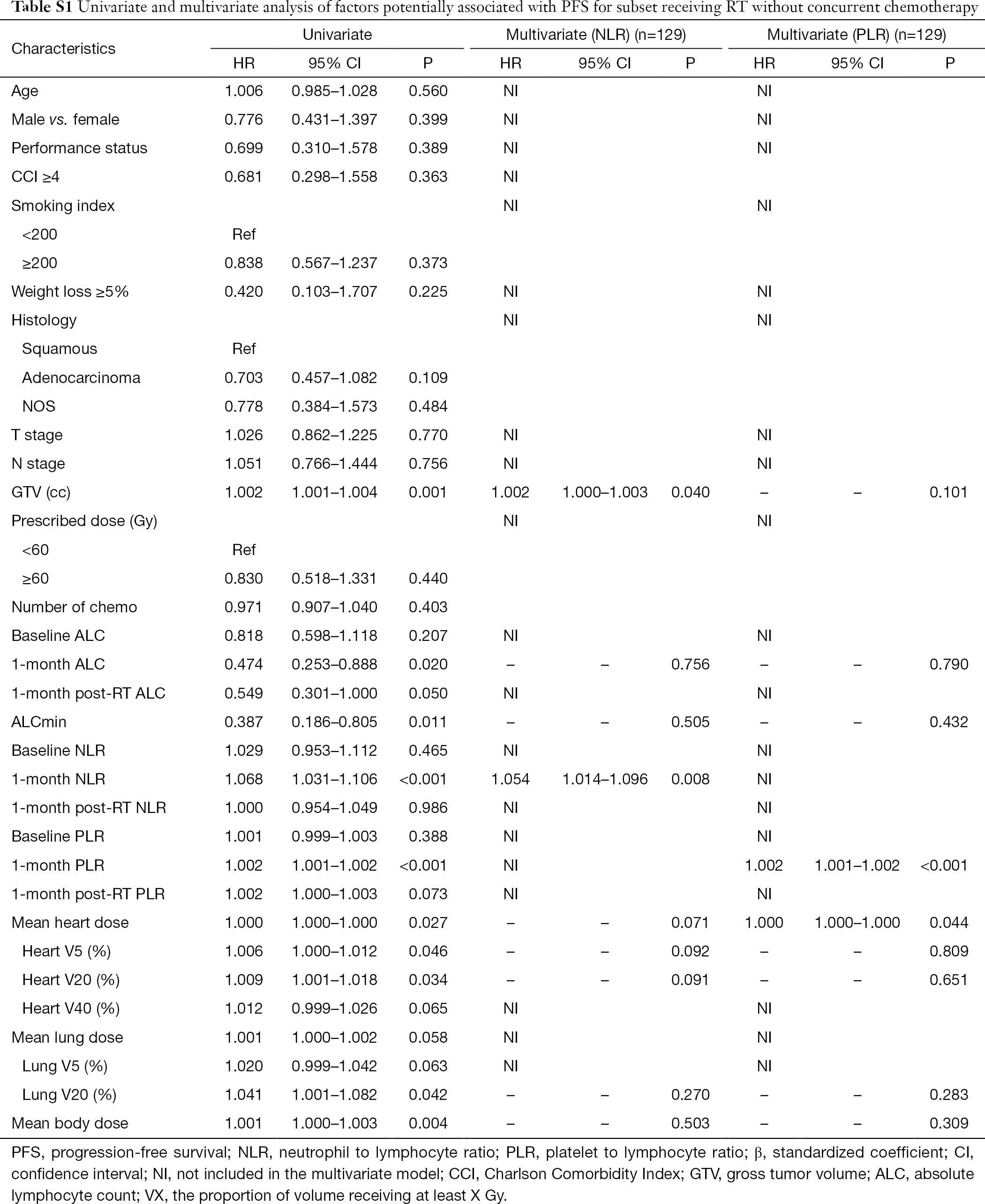 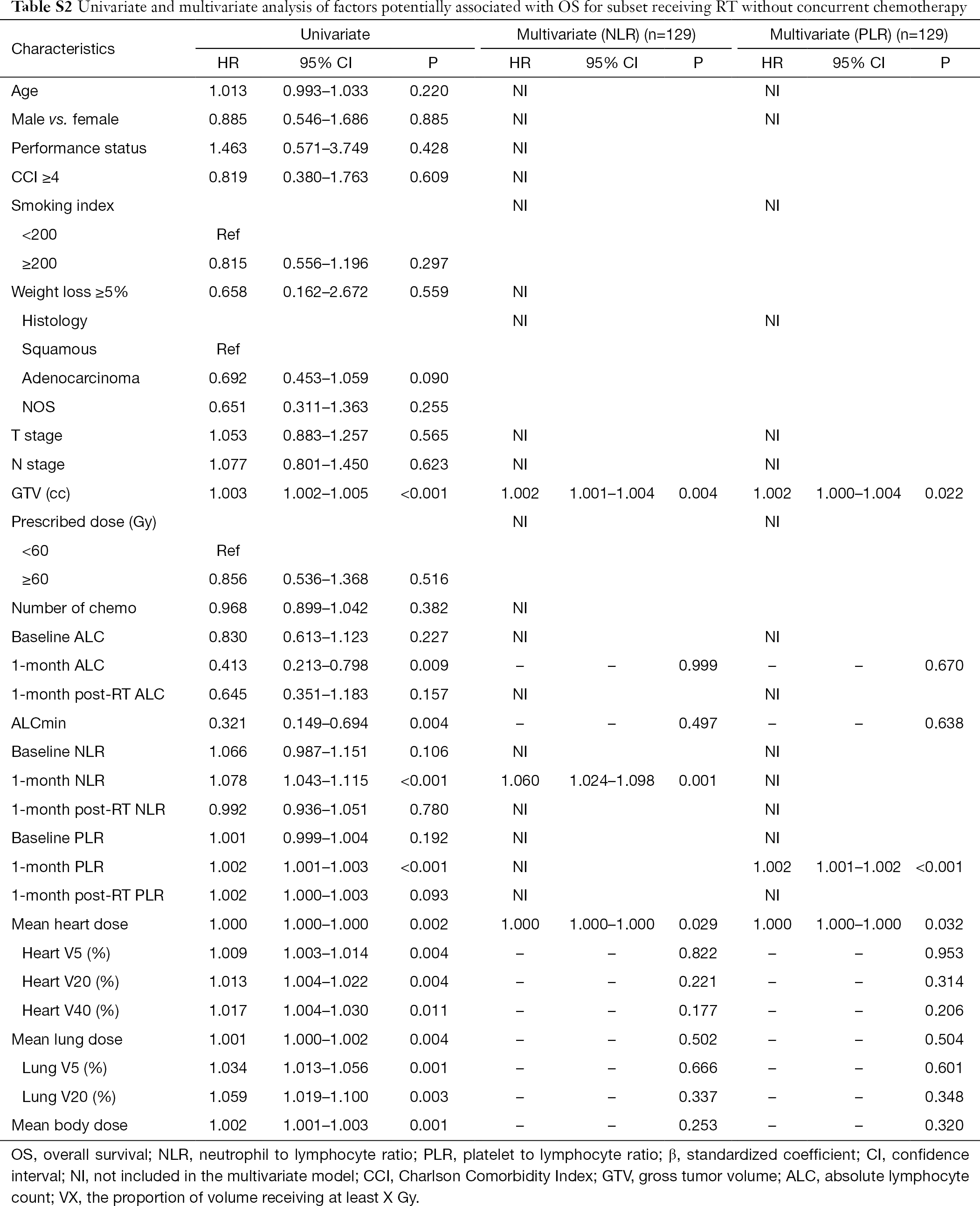 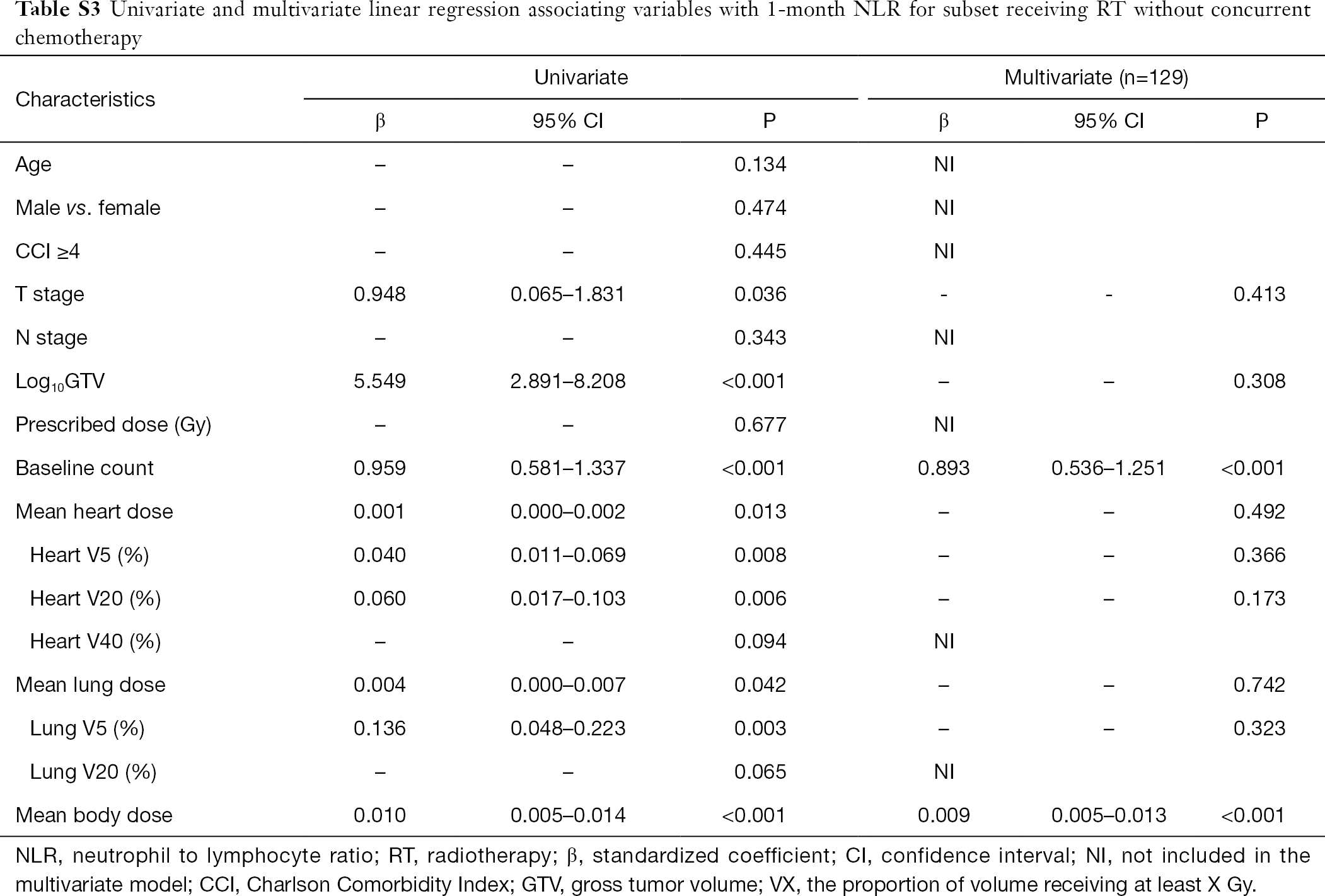 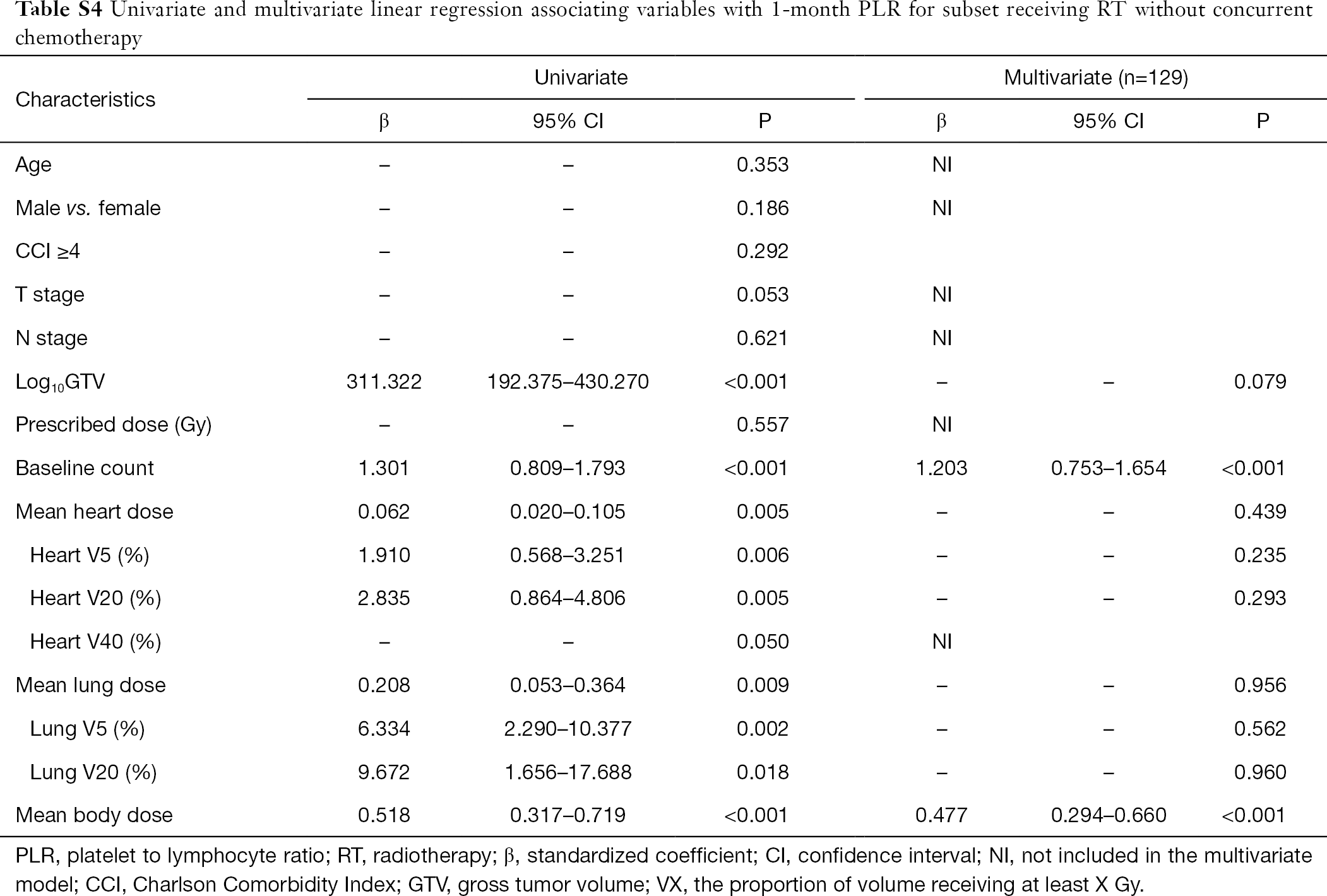 Accumulating evidence shows that inflammation and immune response are essential stimulators for cancer initiation, progression, and prognosis (19,20). Lymphocytes could inhibit tumor cell proliferation and migration by secreting various cytokines (21). However, research has indicated that neutrophils induced by transforming growth factor-β (TGF-β) dominate the immune cell composition in NSCLC and influence the cytolytic activity of lymphocytes or natural killer cells (22,23). Thus, increased neutrophil counts are associated with a poor prognosis. It has been reported that platelets could release vascular endothelial growth factor (VEGF) and other cytokines to activate angiogenesis, associated with tumor metastasis and poor prognosis (24). There have been numerous studies on the prognostic potential of NLR and PLR in various solid tumors. Two meta-analyses have found that high NLR and PLR are associated with worse OS and PFS in NSCLC of different stages and treatment (13,25). Our study also revealed that patients with elevated NLR or PLR were more likely to have worse OS and PFS.

Baseline count, heart V20, V40, or MBD was significantly associated with 1-month post-RT start NLR or PLR in our cohort. Similarly, other studies have identified that heart V50 >25% were significantly associated with an NLR >10.5 4 months post-RT (26). Tang et al. demonstrated that a higher volume of lung tissue receiving 5 Gy and higher GTV were significant predictors of lymphocyte nadir (9). Peripheral lymphocytes are known to be the most radiosensitive cells despite mitotic inactivity with a D50 as low as 2 Gy (27). Yovino et al. found that a single radiation fraction delivered 0.5 Gy exposure to 5% of circulating cells. What is more, after the course of 30 fractions, 99% of circulating cells would receive more than 0.5 Gy (28). Likewise, we found that after 18–30 fractions of radiation, ALC tended to decline. Others found that reducing RT treatment volumes in glioblastoma was associated with less lymphopenia (29). Research has also demonstrated that the integral body dose was negatively correlated with post-treatment ALC (30). Therefore we could reasonably extrapolate that the use of SBRT or proton may minimize the heart dose and body dose, reducing the adverse effect of radiation on NLR or PLR.

The results of the PACIFIC trial show that treatment with adjuvant immunotherapy following definitive chemoradiation results in a significant improvement in PFS and OS for LA-NSCLC (5). This trial warrants further prospective research on the anti-tumor immune response after radical RT. Retrospective studies have demonstrated that elevated pretreatment NLR and PLR are associated with shorter OS and PFS and with lower response rates in patients with metastatic NSCLC treated with nivolumab independently of other prognostic factors (31). Also, it has been shown that increased NLR and PLR values 6 weeks after baseline are associated with shorter OS and PFS in patients who have advanced cancer treated with immunotherapy (32). While our findings were in agreement with these previous studies, we demonstrated for the first time that increased 1-month post-RT start NLR and PLR are associated with worse PFS and OS.

There are several limitations to this study. First, this was a retrospective study in a single tertiary academic center with selection bias and loss of laboratory value measurements. Therefore, a large sample multicenter clinical study or external validation should be performed in the future. Also, we only studied the prognostic association between baseline, 1-month post-RT start, or 1-month post-RT completion inflammatory biomarkers with clinical outcomes. Other variables that illustrate more delicate descriptions of inflammatory biomarkers change, including subpopulations, should be investigated and might be more predictive.

In this study, we have demonstrated for the first time a significant association between heart V20, V40 or MBD and 1-month post-RT start NLR or PLR, in addition to confirming the prognostic effect of 1-month post-RT start NLR and PLR on multivariate analysis in advanced NSCLC treated with definitive RT, taking into account the mutation of EGFR and ALK rearrangements.

Funding: This study was supported by the National Key Research and Development Program of China (2016YFC0905502), the Shanghai Shen Kang Hospital Development Center Clinical Research Plan of SHDC (16CR1016A), and the Project of Shanghai Science and Technology Commission (18YF1421500).

Reporting Checklist: The authors have completed the STROBE reporting checklist. Available at http://dx.doi.org/10.21037/tlcr-20-831

Conflicts of Interest: All authors have completed the ICMJE uniform disclosure form (available at http://dx.doi.org/10.21037/tlcr-20-831). The authors report grants from the National Key Research and Development Program of China (2016YFC0905502), grants from the Shanghai Shen Kang Hospital Development Center Clinical Research Plan of SHDC (16CR1016A), grants from the Project of Shanghai Science and Technology Commission (18YF1421500), during the conduct of the study.

Ethical Statement: The authors are accountable for all aspects of the work in ensuring that questions related to the accuracy or integrity of any part of the work are appropriately investigated and resolved. All procedures performed in this study involving human participants were in accordance with the Declaration of Helsinki (as revised in 2013). The study was approved by the institutional review board of Shanghai Chest Hospital (No. KS1716). Because of the study’s retrospective nature, the need for written informed consent was waived.