A case study of a patient with EGFR G724S who responded to afatinib monotherapy after disease progression on osimertinib was reported before (1). Incidentally, we encountered a patient who also had EGFR G724S who developed meningeal metastases. After treatment with a regimen of osimertinib combined with afatinib, our patient achieved significant clinical benefits. 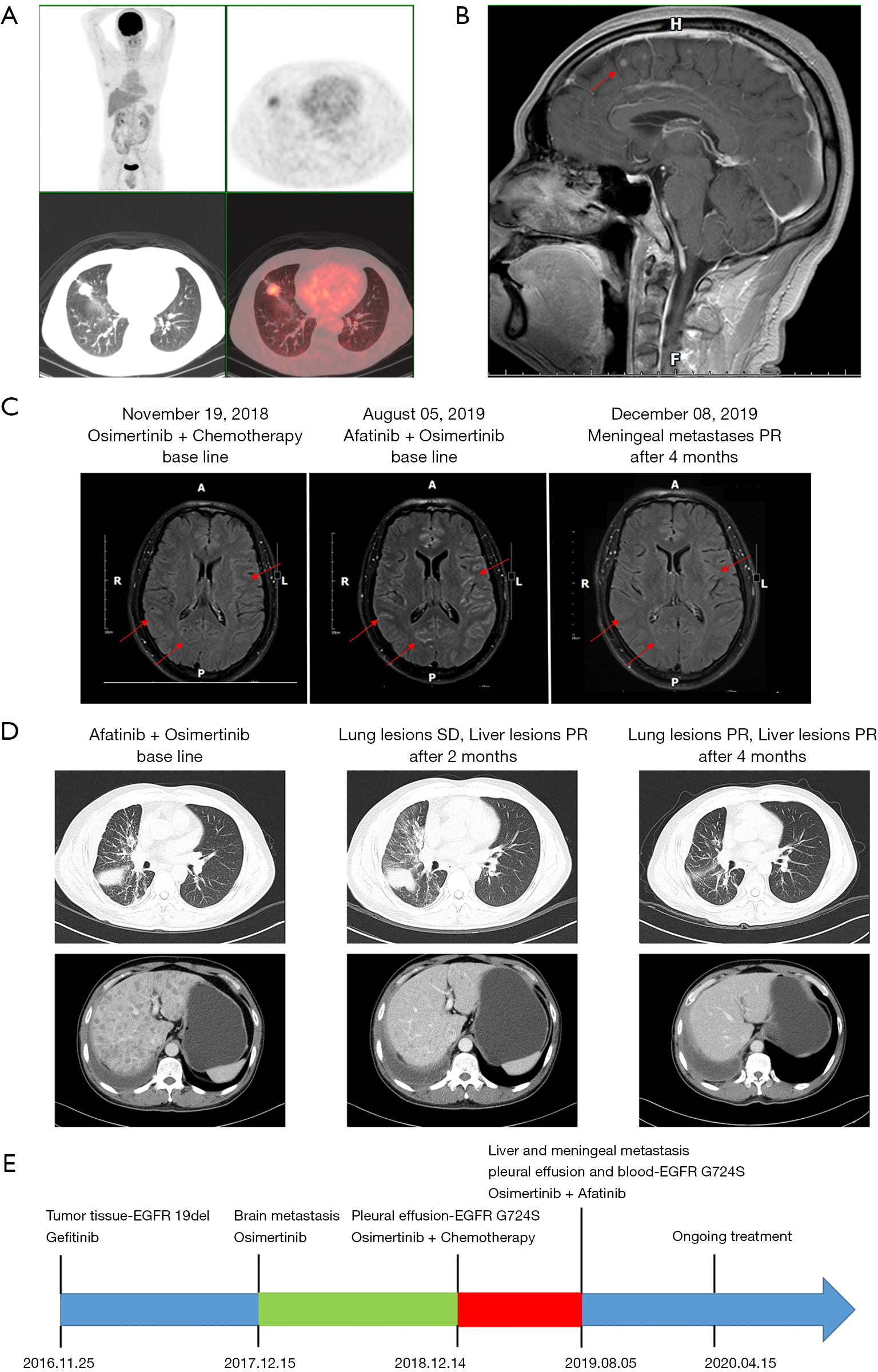 On November 19, 2018, the patient experienced an increase in pleural effusion as disease progression. An NGS test of the patient’s pleural effusion revealed the emergence of EGFR G724S with pre-existing EGFR 19del. Thereafter, while maintaining the use of osimertinib, the patient received chemotherapy including carboplatin and pemetrexed, with bevacizumab as an antiangiogenic therapy.

After experiencing dizziness and headache, the patient was reexamined by craniocerebral MRI on August 05, 2019, which revealed extensive abnormal thickening and enhancement of the meninges; meningeal metastases were considered. CT at the same time showed multiple liver metastases and peritoneal metastases.

Another NGS examination of the patient’s pleural effusion and blood was performed, which showed EGFR G724S and 19del mutation were still present in both samples. Considering both in vitro and in vivo studies have indicated that EGFR G724S/19del can induce resistance to osimertinib in patients while maintaining sensitivity to afatinib (2,3), the patient began afatinib 40 mg daily while continuing osimertinib 80 mg daily on August 06, 2019. After 1 month, the patient’s neurological symptoms were significantly relieved, and after 2 months, follow-up CT and MRI showed that the patient’s meningeal metastases, liver metastases and peritoneal metastases were significantly reduced (Figure 1C,D). To date (March 26, 2020, the cutoff day), the patient has continued to receive afatinib in combination with osimertinib, and no obvious adverse reactions have been observed (Figure 1E). All procedures performed in studies involving human participants were in accordance with the ethical standards of the institutional and/or national research committee(s) and with the Helsinki Declaration (as revised in 2013). Written informed consent was obtained from the patient.

In the previous case report, the patient treated with osimertinib combined with afatinib experienced rapid disease progression (4). However, in this case, a patient with EGFR G724S with meningeal metastases who has achieved significant clinical benefit from the combination therapy regimen is reported for the first time. The patient has achieved progression-free survival of more than 8 months, and the neurological symptoms caused by meningeal metastases have significantly improved.

In summary, this case demonstrates that a regimen of osimertinib combined with afatinib can achieve significant effects in patients with EGFR G724S mutation after progression on osimertinib, especially in those who have meningeal metastases. This represents a new treatment strategy for such patients.

Provenance and Peer Review: This article was a free submission. The article has undergone external peer review.

Conflicts of Interest: All authors have completed the ICMJE uniform disclosure form (available at http://dx.doi.org/10.21037/tlcr-20-847). The authors have no conflicts of interest to declare.