Lung cancer has the highest death rate among all cancers and its incidence rate has increased worldwide. Lung cancer is mainly divided into small cell lung cancer (SCLC) and non-small cell lung cancer (NSCLC), of which NSCLC accounts for about 80% to 85% of all lung cancer cases (1). Solitary pulmonary nodules (SPNs) are a common incidental finding and are early manifestations of lung cancer. In addition, pulmonary nodules are increasingly detected, because of the increased implementation of screening lung cancer-screening programs using low-dose computed tomography (LDCT). Nevertheless, the sensitivity and specificity of LDCT for discriminating whether a nodule is a benign pulmonary nodule (BPN) or a malignant pulmonary nodule (MPN) are not optimal. The National Lung Screening Trial (NLST) reported that the rate of positive screening tests was 24.2% with LDCT with a false positive rate of 96.4% (2). Moreover, a retrospective study showed that only 5% of patients with pulmonary nodules identified with LDCT were diagnosed with lung cancer, indicating that the false positive rate was as high as 95% (3). The high prevalence of false positives using LDCT may lead to invasive and high-risk treatment, the induction of unwarranted anxiety and excessive cost. Therefore, it is clinically imperative to develop novel approaches with greater accuracy to aid in monitoring individuals with SPNs and allow for the safe and cost-effectively diagnosis of NSCLC while preventing benign growths from unnecessary procedures.

Serum tumour markers have been introduced into numerous clinical assessment tools for evaluating pulmonary nodules. In previous studies, it was shown that the combined detection of carcino-embryonic antigen (CEA), cytokeratin 19 fragment 21-1 (CYFRA21-1) and neuron-specific enolase (NSE) is an effective way to distinguish between benign and malignant SPNs. Furthermore, if the model added CYFRA 21-1, it could improve the prediction accuracy between the subgroups of benign and malignant SPNs (4,5).

In addition, inflammation has been confirmed to aid in the proliferation and survival of malignant cells, promotes angiogenesis and metastasis, subverts adaptive immune responses, and alters responses to hormones and chemotherapeutic agents (6). Several lung cancer patients exhibit elevated levels of distinct inflammatory markers in serum, including C-reactive protein (CRP) (7), interleukin (IL)-6, IL-8 (8), serum amyloid A (SAA) (9), and lactate dehydrogenase (LDH) (10) suggesting that the inflammatory markers could potentially be used as potential diagnostic markers for lung cancer. In recent studies, nodule radiographic and image characteristics coupled to clinical information such as age, smoking history, and hematological biomarkers have emerged as one of the main research directions to differentiate the BPNs from early-NSCLC (eNSCLC) (11,12).

Therefore, in our study, we aimed to establish a new tool for the differential diagnosis of eNSCLC based on candidate markers of clinical characteristics, radiographic image features, and hematological biomarkers, which may improve the accuracy of distinguishing benign from MPNs. In addition, we compared the diagnostic accuracy and the discriminative ability of our model with the Peking University People’s Hospital (PKUPH) model (13) and the Mayo Clinic model (14).

We present the following article in accordance with the TRIPOD reporting checklist (available at http://dx.doi.org/10.21037/tlcr-20-460).

We reviewed the medical records from 94 eNSCLC and 48 BPNs patients who first visited the Sun Yat-sen University Cancer Center (Guangzhou, China) between January 2018 and December 2018. Patients were divided into a training cohort (Group A) and a validation cohort (Group B). A total of 81 patients (27 BPNs, 54 eNSCLC) were collected as Group A to create a mathematical model for eNSCLC. Another 61 patients (21 BPNs, 40 eNSCLC) served as Group B to validate this new model. All procedures performed in this study were in accordance with the Declaration of Helsinki (as revised in 2013) and approved by the Ethics Committee of the Sun Yat-sen University Cancer Center (registration ID: GZR2018-051). Because of the retrospective nature of the research, the requirement for informed consent was waived. Inclusion criteria were as follows: (I) patients with a definitive benign diagnosis and confirmed pathological diagnosis of NSCLC, and TNM (tumor-node-metastasis) stage were at stage I or stage II; (II) patients with a complete set of clinical data; and (III) patients without secondary carcinomas as assessed by computed tomography (CT) and ultrasonographic examination. Clinical data collected include the age of the patient, gender, body mass index (BMI), smoking history, family history of cancer, and TNM stage. CT imaging included nodule position, diameter, clear border, spiculation, and calcification. Biomarkers of blood analysis included inflammatory-related factors: albumin (ALB), CRP, LDH, SAA, ALB/CRP ratio (ACR), SAA/CRP ratio (SCR), white blood cells (WBC), neutrophils (N), lymphocytes (L), platelet (PLT), neutrophil-to-lymphocyte ratio (NLR), platelet-to-lymphocyte ratio (PLR) and serum tumour markers: CEA, CYFRA21-1 and NSE.

All statistical analyses were performed using SPSS software, version 19.0 (SPSS Inc., Chicago, IL, USA) and R (version 3.4.4) for Windows. For all clinical characteristics in Group A, a least absolute shrinkage and selection operator (LASSO) regression was performed to select for the probability of eNSCLC. LASSO shrinks all regression coefficients towards zero and sets the coefficients of many irrelevant features exactly to zero (15). Next, multivariate logistic regression analysis was used to identify independent predictors of the probability of eNSCLC. A mathematical diagnostic model for distinguishing between BPNs and eNSCLC was established based on the results of the multivariate logistic regression analysis. The model calibration was assessed with the Hosmer-Lemeshow goodness of fit test (P≥0.10) (16). Receiver-operating characteristic (ROC) curve, a graphical technique for describing and comparing the accuracy of diagnostic tests, was used to evaluate the sensitivity and specificity of the mathematical model and to choose its best diagnosis cut-off points. Adopting the area under the ROC curve (AUC), net reclassification improvement index (NRI) (17), integrated discrimination improvement index (IDI) (17) and decision curve analysis (DCA) (18) were used to compare the diagnostic accuracy and discriminative ability of our model to the PKUPH and Mayo models. A larger AUC, NRI and IDI indicated a more accurate classification. Subsequently, data of the patients in Group B were used to verify the accuracy of the model. The difference was considered statistically significant when P<0.05. 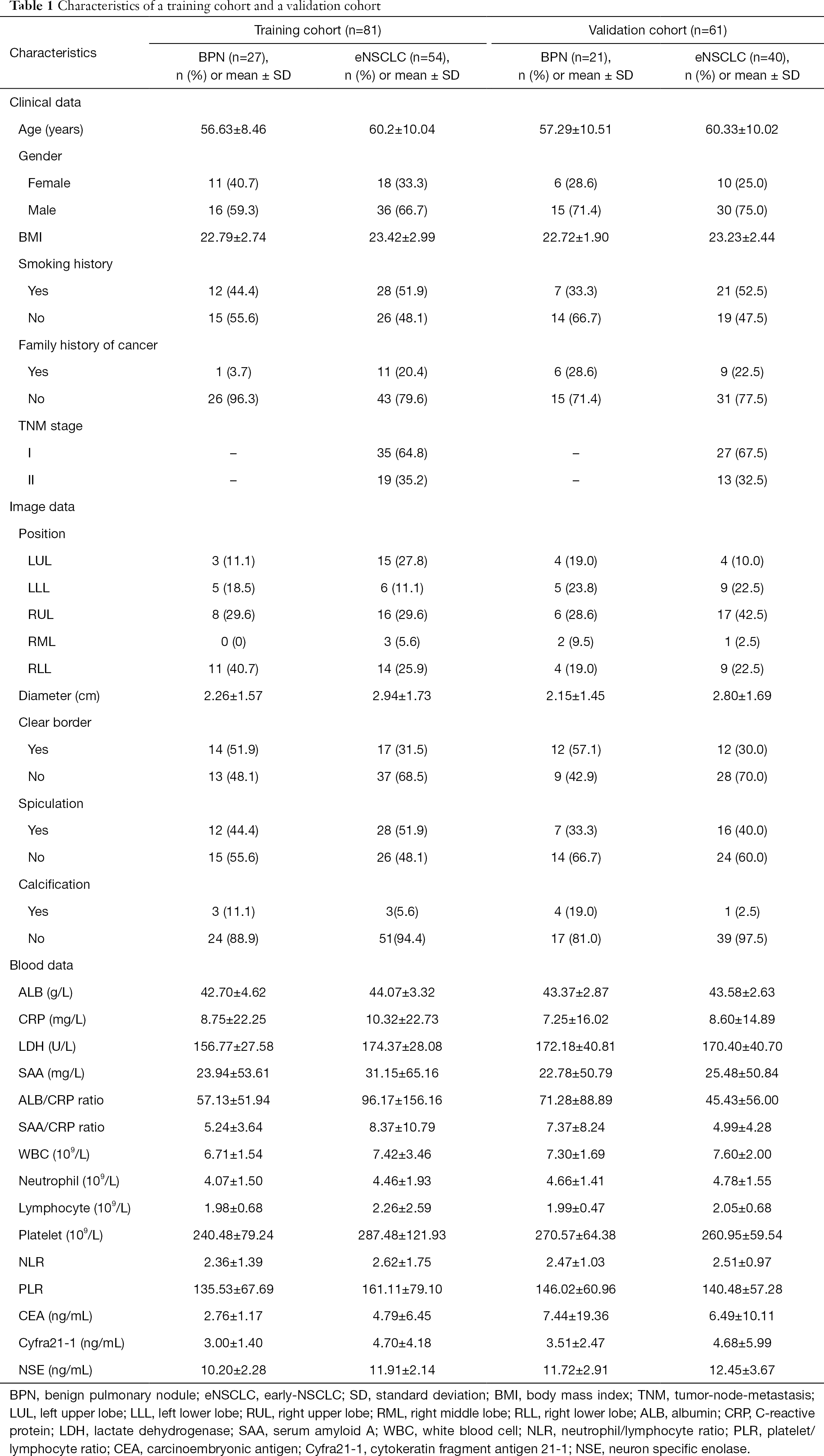 The mathematical model established by logistic regression was as follows: 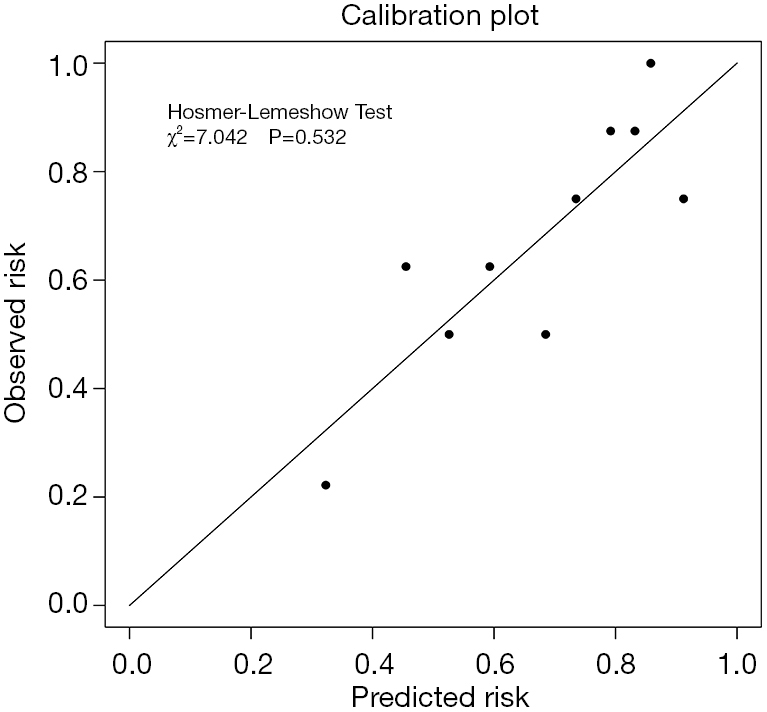 Figure 1 Calibration plot of the predictive model from the training cohort.

Data for the training cohort and validation cohort were substituted into the proposed model, PKUPH model, and the Mayo model to compare the diagnostic accuracy and discriminative ability of determining whether pulmonary nodules were benign or malignant using AUC, NRI, IDI, and DCA. 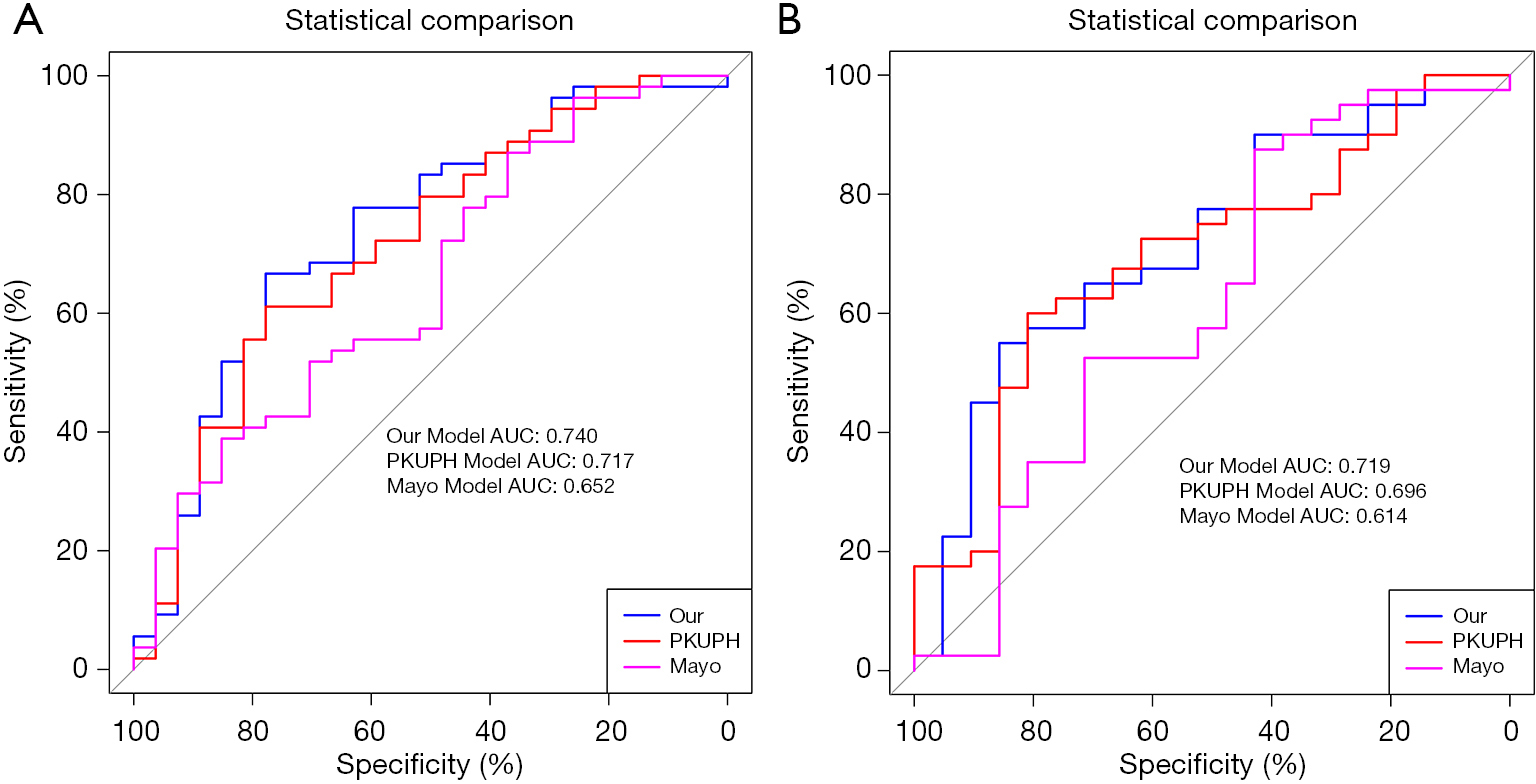 Figure 3 Decision curve analysis for three clinical prediction models in the training cohort (A) and in the validation cohort (B).

In this study, multivariate logistic regression analysis identified only age, ALB levels, and nodule border as identified as independent predictors for estimating eNSCLC in SPNs. Based on these results, a clinical prediction model for SPNs was established, which showed our clinical prediction model had better diagnostic accuracy and discriminatory ability compared to the older models in discriminating SPNs.

With increasing patient age, the carcinogenic factors give more stimulation to the body and the capability of self-renewal, and repairing somatic cells was gradually decreased in humans. Swensen et al. reported that age, cigarette-smoking status, history of cancer, nodule diameter, spiculation, and upper lobe location of the SPNs were independent factors of malignancy and with advanced age, the possibility for malignancy of SPNs increased significantly (14,19). MPNs tend to form unclear, matte border features. An intensely clear border intensely predicted the presence of a benign nodules (20). In previous studies, it was shown that in 20–30% of malignant tumors, the borders were smooth, especially in metastatic tumors. Zheng et al. recently reported that ALB levels were new independent predictors of malignancy in SPNs (21). In the current study, multivariate logistic regression analysis of our research showed that age, border and ALB levels were independent factors for malignancy of SPNs.

The Mayo model was the most widely used to predict malignant SPNs, and the PKUPH model had been recently published with claims of superiority over traditional models (22,23). Compared to the previous studies, our model has the following advantages: first, in this study, data on 6 clinical features, 5 CT imaging indices, and 15 serum biomarkers were collected, which resulted in higher specificity and sensitivity compared to using current imaging models or biomarkers. Second, it is well known that it is a challenge to distinguish BPNs from NSCLC (especially early lung cancer). Therefore, we only chose to include eNSCLC (stage I or stage II) patients in our study, which may allow our results to improve the rate of early diagnosis of lung cancer. Third, predictor selection was one of the most important steps in downscaling procedures. We utilized a LASSO method to select the probability of eNSCLC for SPNs. The merits of LASSO include: a. a smaller mean squared error (MSE) than conventional methods; b. it handled the multi-collinearity problem; and c. overall variable selection (24-26). Finally, the diagnostic accuracy and discriminative ability of our model were compared with the PKUPH model and the Mayo model using multiple methods including, AUC, NRI, IDI, and DCA, making it the most comprehensive study reported to date. The multiple methods used to compare our model to the PKUPH model and the Mayo model demonstrated that our model outperformed competing models in distinguishing eNSCLC from SPNs.

Our study does have some limitations. First, we cannot avoid potential selection bias due to the retrospective nature of the study. Furthermore, our data were obtained from a single center and the sample size was relatively small. Therefore, this model needs further studies involving multiple center and ample samples to verify our results. In addition, circulating miRNAs (c-miRNAs) might be an ideal class of biomarkers for blood-based cancer detection. In a number of previous studies, it was reported that c-miRNAs were able to distinguish with remarkable accuracy lung cancer patients from non-cancer subjects with remarkable accuracy (27-29). However, the high cost of the detection of c-miRNAs prevents this method from being a common practice in our cancer center.

In conclusion, the newly proposed model only uses one general clinical index (age), one imaging index (border of nodule), and a serum marker (ALB level). To our knowledge, our model has better diagnostic accuracy and discriminatory ability than the older models in discriminating SPNs. Therefore, this model will help clinicians to accurately discriminate between benign and malignant nodules, and improve the rate of early diagnosis of lung cancer. Furthermore, a large-scale clinical study will be required to verify the importance and utility of our model.

Funding: This work was supported by the National Natural Science Foundation of China (Grant No. 81803110).

Reporting Checklist: The authors have completed the TRIPOD reporting checklist. Available at http://dx.doi.org/10.21037/tlcr-20-460

Conflicts of Interest: All authors have completed the ICMJE uniform disclosure form (available at http://dx.doi.org/10.21037/tlcr-20-460). The authors have no conflicts of interest to declare.

Ethical Statement: The authors are accountable for all aspects of the work in ensuring that questions related to the accuracy or integrity of any part of the work are appropriately investigated and resolved. All procedures performed in this study were in accordance with the Declaration of Helsinki (as revised in 2013) and approved by the Ethics Committee of the Sun Yat-sen University Cancer Center (registration ID: GZR2018-051). Because of the retrospective nature of the research, the requirement for informed consent was waived.