The treatment for non-small cell lung cancer (NSCLC) has improved over the recent decades due to new treatment modalities. However, metastasis to the central nervous system (CNS) is common in NSCLC patients and is a difficult hurdle to overcome in the treatment of NSCLC. Additionally, as magnetic resonance image (MRI) of the brain has become routine in the initial workup for NSCLC, detection of CNS metastases at initial diagnosis has increased in lung cancer patients (1). Therefore, treatment of CNS metastasis has become of paramount importance.

Currently, five EGFR TKIs are available as first-line therapy for advanced EGFR-mutant NSCLC in the U.S.: gefitinib, erlotinib, afatinib, dacomitinib, and osimertinib. In a subgroup analysis of the FLAURA trial, osimertinib had better efficacy for brain metastasis than gefitinib or erlotinib (6,7). However, the use of osimertinib as a first-line therapy is limited to a small population in most countries due to its high cost. Dacomitinib has not yet been approved in many countries, although it has recently been approved for use Europe. Therefore, in many countries including Korea, only three EGFR TKIs (gefitinib, erlotinib, and afatinib) are practical treatment options for patients with EGFR-mutant NSCLC.

In clinical practice, physicians often encounter newly diagnosed EGFR-mutant NSCLC patients with brain metastasis and need to choose an appropriate TKI as a first-line therapy. As described above, however, there is very little clinical information comparing the CNS efficacy among the three most commonly available TKIs. Therefore, this study evaluated which of the most commonly available first- or second-generation EGFR TKIs is most efficient in the control of brain metastasis and in prevention of new CNS metastasis in patients with EGFR-mutant NSCLC.

The authors present the following article in accordance with the STROBE reporting checklist (available at http://dx.doi.org/10.21037/tlcr-20-379).

To evaluate CNS response, measurable brain metastatic lesions were assessed using unidimensional evaluation with Response Evaluation Criteria in Solid Tumors (RECIST) software, version 1.1 modified to allow target lesion in the brain of 5 mm or greater (or at least twice the slice thickness of 2.5 mm) and permitting up to five target brain metastases (15). The CNS response cohort included patients who met the following criteria: (I) a measurable CNS lesion, (II) CNS lesion untreated with local therapy before starting EGFR TKIs, and (III) at least one follow-up using brain MRI during the TKI treatment. Local therapies for CNS lesions included radiation therapy, such as stereotactic radiosurgery (SRS) or whole brain radiation therapy (WBRT), and craniotomy with tumor removal. The CNS response rates were calculated as the ratio of number of patients who achieved an objective response (according to RECIST 1.1) to the total number of CNS response cohorts among the three TKI groups.

This study was performed in accordance with the Declaration of Helsinki (as revised in 2013). This study was reviewed and approved by the Institutional Review Board (IRB No. 2018-02-111) at Samsung Medical Center. Consent to participate was waived by the ethics board.

The all-data cutoff date for the analyses was September 31, 2018. To compare baseline characteristics, CNS response rates, and incidence rates of new brain metastasis among the three TKIs groups, the chi-square test was used. The CNS-PFS was calculated using a Kaplan–Meier estimator and compared using the log rank test. For multivariate analysis, a Cox regression model was fitted by adjusting the prognostic variables deemed significant (P<0.05) in univariate analysis of PFS. CNS-PFS is presented as the median value with two-sided 95% CI. CNS-PFS was defined as the first date of EGFR-TKIs until CNS progression [i.e., new brain or leptomeningeal metastasis or increase of preexisting CNS lesions, according to RECIST 1.1 (16)] or death resulting from any cause. Patients with no CNS progression or death at the time of the analysis were censored as of the last day of administration of EGFR-TKIs.

A competing risk analysis estimating the cumulative incidence for the event of interest (CNS progression) in the presence of two competing risk events (non-CNS progression and death) was performed using a semiparametric Fine–Gray regression model. Event time was defined as either occurrence of the earliest of the three events or patients were censored at the time of their last assessment. Statistical analysis was executed using R software, version 3.5.1, with the cmprsk package (Vienna, Austria; http://www.R-project.org). Cumulative incidence was adjusted for EGFR mutation type and preexisting CNS metastases before EGFR TKI treatment. P-value and 95% CI, for HR were corrected using Bonferroni’s method due to multiple testing with a raw P-value multiplied by 2 in subgroup analysis (one group with preexisting CNS metastases and one group without). All P-values were two-sided, and P<0.05 was considered statistically significant.

The total number of patients treated with first-line EGFR-TKIs during the study period was 559. Table 1 summarizes the baseline characteristics of these patients. During the study period, 299, 93, and 167 patients started first-line gefitinib, erlotinib, and afatinib treatment, respectively. Compared to the other two groups, the afatinib group was younger and had more mutations involving deletions in exon 19, the gefitinib group had more female patients and patients who had never smoked, and the erlotinib group had more patients with initial brain metastasis before starting EGFR TKI. There was no difference in CNS tumor burden among three groups, in terms of number or size of brain metastasis in the CNS response cohort. The median treatment duration was 14.9, 11.2, and 17.7 months for gefitinib, erlotinib, and afatinib, respectively. 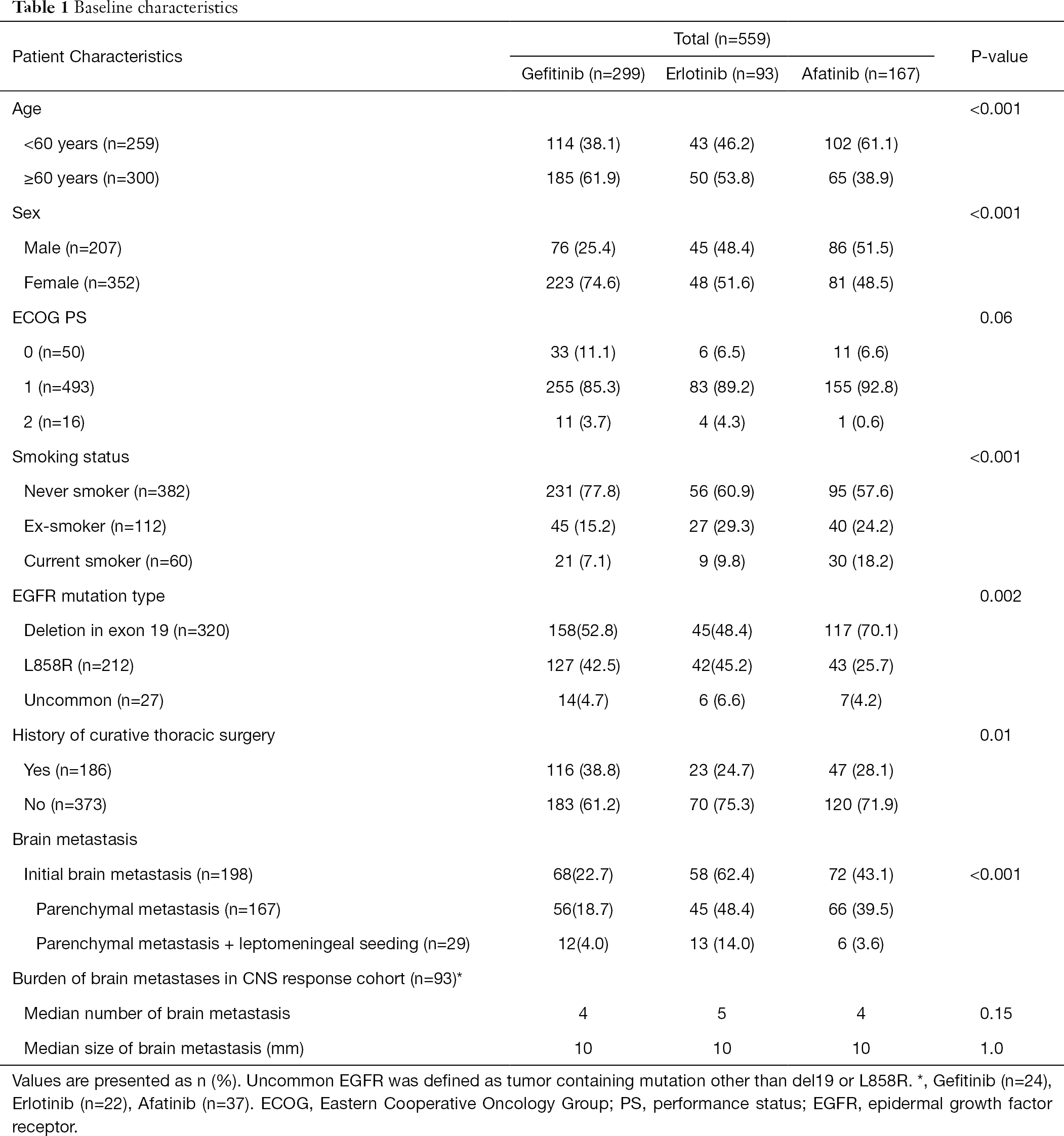 Overall survival for the three EGFR-TKIs

Median OS were 33.0, 31.1 and 33.1 months for gefitinib, erlotinib and afatinib respectively. There was no statistically significant difference of median OS among the three EGFR-TKIs (P=0.98) (Figure S1). 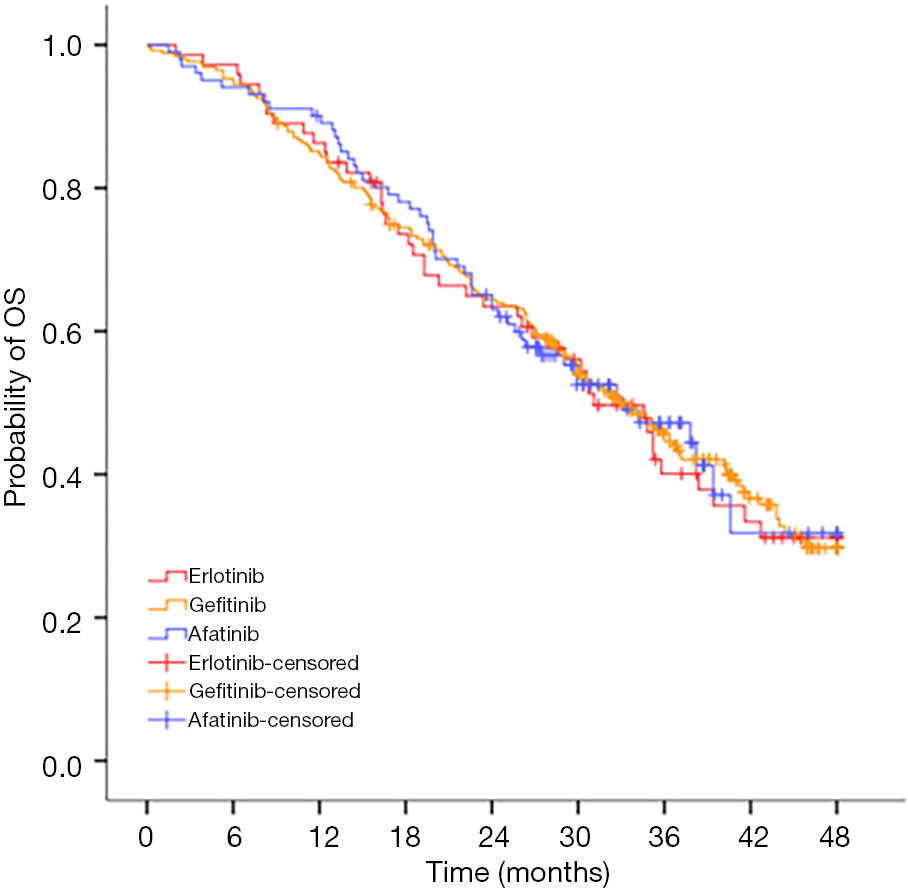 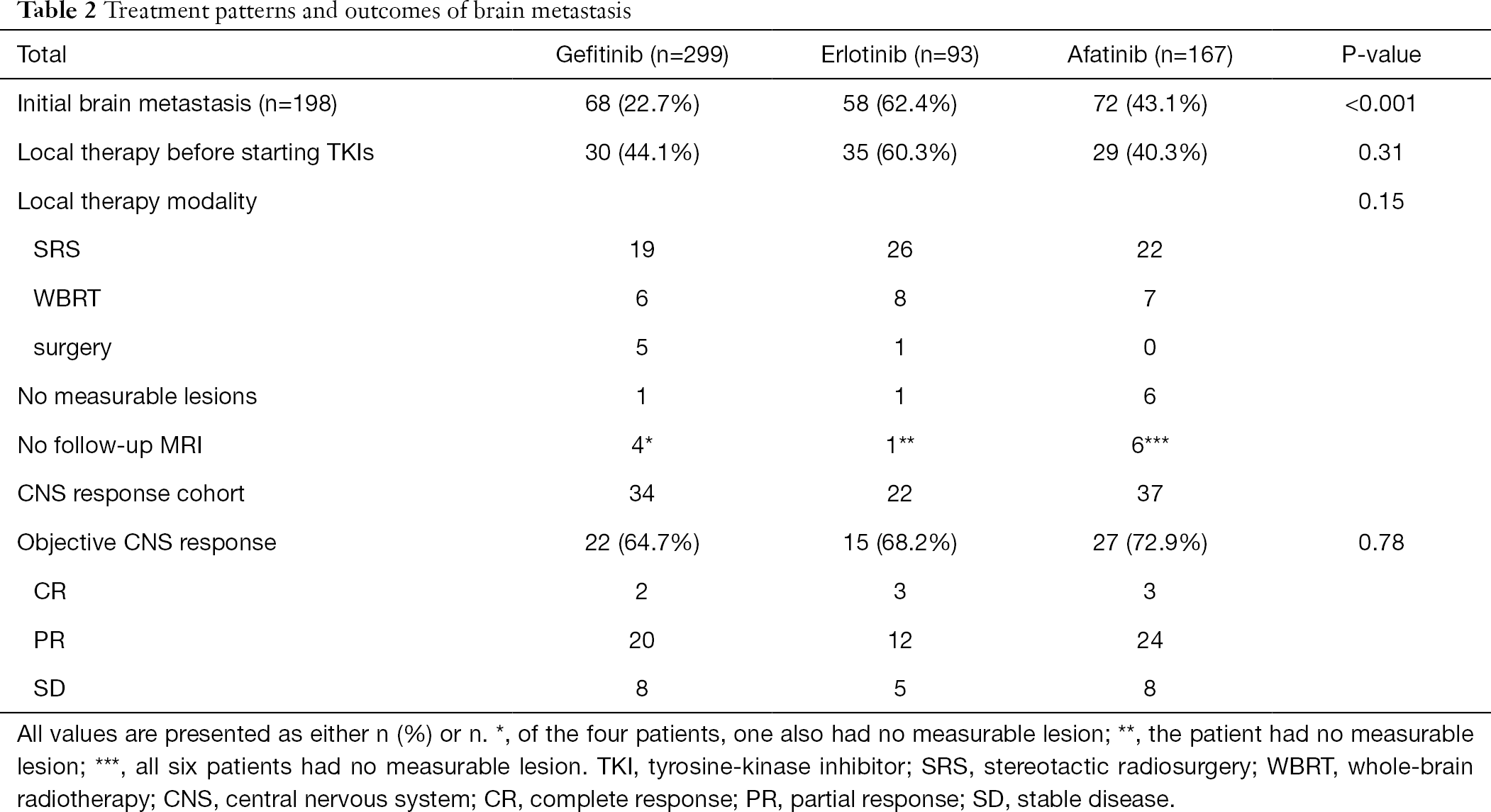 Cumulative incidence of CNS failure in the entire study population

After adjusting for possible compounding factors, such as EGFR mutation type and preexisting CNS metastasis, the cumulative incidences of CNS failure were significantly different among the three EGFR TKI groups (P<0.001) (Table 4, Figure 1B). When afatinib was compared with gefitinib and erlotinib (as a compound group), it significantly reduced the cumulative incidence of CNS failure (HR 0.51, 95% CI, 0.34–0.75, P=0.0007) (Table 4).

Since the existence of initial brain metastasis may affect the CNS efficacy of TKIs, we performed subgroup analysis on the cumulative incidence of CNS failure according to initial brain metastasis. Of the 198 patients with initial CNS metastases, 88 showed a CNS failure event. The gefitinib group had a significantly higher cumulative incidence of CNS failure compared with the erlotinib or afatinib groups, with 24-month cumulative rates of 59.3%, 28.1%, and 35.4%, respectively (P<0.001) (Figure 2A). After adjusting for EGFR mutation type and history of local therapy before starting TKI therapy, the difference was still significant (P=0.004).

In addition, several reports have shown that brain metastasis in patients with tumors harboring a deletion in exon 19 had distinguishing radiographic features and favorable outcomes compared with other EGFR mutations including L858R (8,20). Our study also found that a deletion in exon 19, as well was the initial existence of brain metastasis, was associated with longer PFS. After adjusting for these prognostic factors, the protective effect of afatinib became more significant compared with that of gefitinib or erlotinib (HR 0.51, 95% CI, 0.34–0.75) (Table 4).

There were significant differences in the proportion of patients with initial brain metastasis, among the gefitinib (22.7%), erlotinib (62.4%), and afatinib (43.1%) groups. Since the choice of TKI was performed depending on physician discretion in this study, the TKI treatment chosen for patients with brain metastasis may have been affected by physician awareness of previous studies favoring erlotinib or afatinib in terms of blood-to-brain penetration rates or IC50 level (10-12).

The non-neglectable incidence rates of CNS failure in the subgroup without initial brain metastasis indicate that the CNS efficacy of EGFR TKIs should be considered for all patients regardless of initial brain metastasis. The 24-month-cumulative incidence rate of new brain metastasis in the gefitinib and erlotinib groups was approximately two (18.5%) and three times (29.3%), respectively, that of the afatinib group (9.6%). Since other biases, such as prior local therapy, could not have affected this analysis of CNS efficacy, these data more accurately represent the superior efficacy of afatinib.

Our study has significant limitation by its retrospective nature. We had not assessed CNS status or checked brain images in a preplanned manner. As a result, the most important bias is the irregular follow-up schedule of brain MRI among the study population. All patients included in this study were evaluated using brain MRI as part of their staging workup before starting first-line EGFR TKI therapy. However, 31.1% (174/559) of patients who did not complained of CNS symptoms did not receive follow-up brain MRI during EGFR TKI therapy. In addition, follow-up brain MRI was performed based either on patient reported symptoms, which were possibly associated with CNS progression, or on an individual physician’s tendency to check for asymptomatic CNS progression and not based on a pre-planned schedule. However, it can be reasonably assumed that the follow-up MRI criteria were universally applied in all three TKI groups so that any bias would not significantly affect the comparative analysis among the three TKI groups. The second limitation is the possibility of a different burden of brain metastasis among the three TKI groups. To overcome this limitation, we performed subgroup analysis according to the existence of initial brain metastasis. However, the burden can vary even within a subgroup with initial brain metastasis. The high proportion of local therapy, including WBRT, in the erlotinib group suggests a slightly larger burden in that group. The choice of selection of the EGFR-TKIs was by individual physician. There were major imbalances among the three TKI groups, especially exon 19 mutations were present in 70% of the afatinib group compared to 50% in the other two groups. Also, we had very limited clinical data on the CNS efficacy of the newly approved second-generation TKI dacomitinib because the phase III study comparing it with gefitinib did not include any patients with brain metastasis (21). Based on a previous mouse study showing its high blood-to-brain penetration rate (22), dacomitinib is expected to have excellent CNS efficacy comparable with afatinib, although it must be further investigated clinically.

In this study, we evaluated patterns of treatment and their outcomes for brain metastasis in patients with EGFR-mutant NSCLC. Our study showed that the CNS response rates were similar among three EGFR-TKIs. Afatinib had a superior tendency in terms of CNS-PFS, and cumulative incidence of CNS failure compared with gefitinib or erlotinib. However, our study, as a retrospective study, has significant limitation for the accurate comparison of CNS efficacy, so cautious interpretation or prospective studies are necessary before the clinical application of our data.

Reporting Checklist: The authors have completed the STROBE reporting checklist. Available at http://dx.doi.org/10.21037/tlcr-20-379

Conflicts of Interest: All authors have completed the ICMJE uniform disclosure form (available at http://dx.doi.org/10.21037/tlcr-20-379). The authors have no conflicts of interest to declare.

Ethical Statement: The authors are accountable for all aspects of the work in ensuring that questions related to the accuracy or integrity of any part of the work are appropriately investigated and resolved. This study was performed in accordance with the Declaration of Helsinki (as revised in 2013). This study was reviewed and approved by the Institutional Review Board (IRB No. 2018-02-111) at Samsung Medical Center. Consent to participate was waived by the ethics board.