How long is cessation of preoperative smoking required to improve postoperative survival of patients with pathological stage I non-small cell lung cancer?

The number of surgical cases of non-small cell lung cancer (NSCLC) is increasing worldwide due to the increasing use of computed tomography (CT) (1,2). However, despite complete resection for early-stage NSCLC, lung cancer has a high frequency of recurrence (3). Multiple studies have demonstrated that some perioperative clinicopathological factors, such as pleural invasion (PL), vascular invasion (VI), and lymphatic permeation (LY), were identified as predictive markers of tumor relapse in resected early stage NSCLC (4-6). Indeed, PL was confirmed as an upstaging factor of “T” in the seventh TNM staging of lung cancer (7). In other words, these factors as well as nodal metastasis are representative surrogate markers that can reflect tumor invasiveness in early stage NSCLC.

Non-adenocarcinomas, such as squamous cell carcinomas, are generally considered to be associated with heavy smoking (8). Low yield filter cigarettes with deeper and more frequent inhalation may result in increased delivery of carcinogens to the lung peripheries. This may contribute to an increased incidence of adenocarcinoma of the lung (9). Non-smokers with specific genetic features too can develop lung adenocarcinoma (10). Some reports have stated that preoperative smoking cessation can prevent perioperative complications, such as postoperative pneumonia (11,12). However, the influence of preoperative smoking on the progression and invasiveness of early stage NSCLC remains unclear.

Additionally, there is an increase in the number of smokers who quit smoking owing to the worldwide educational efforts regarding the importance of smoking cessation as a means of preventing lung as well as other cancers (8,13). Unfortunately, some ex-smokers may still be diagnosed with NSCLC. In order to encourage current smokers to quit smoking, we should be able to provide information regarding the duration of smoking cessation prior to the diagnosis of stage I NSCLC that may result in outcomes and prognosis in smokers similar to that in non-smokers. However, this information is currently unavailable.

In this study, we examined the relationship between prognostic factors and preoperative smoking status in cases of resected pathological stage I NSCLC. We also investigated the period of smoking cessation that would make up for the past smoking history in terms of postoperative survival.

We present the following article in accordance with the STROBE reporting checklist (available at http://dx.doi.org/10.21037/tlcr-20-465).

This study was approved by our institutional review board in March 2020 (approved number #2483). The requirement of informed consent was waived due to the retrospective design of the study and because no personally identifiable information was collected. Clinical data including smoking history were recorded by medical staff (nurses and/or doctors) and used for statistical analysis. All procedures performed in this study were in accordance with the Declaration of Helsinki (as revised in 2013)

Overall, 453 patients with pathological stage I NSCLC who underwent complete resection and systematic lymph node dissection at our Institute between January 2004 and December 2018 were enrolled in this study. The cases with invasive diameter >4 cm or lymph node metastasis were excluded based on pathological examinations. Segmentectomy with systematic lymphadenectomy was the procedure included as limited surgery in our retrospective study. Patients who underwent wedge resection and/or neoadjuvant chemotherapy were excluded. Patients with a follow-up of less than one year were excluded (Table 1, Figure 1). 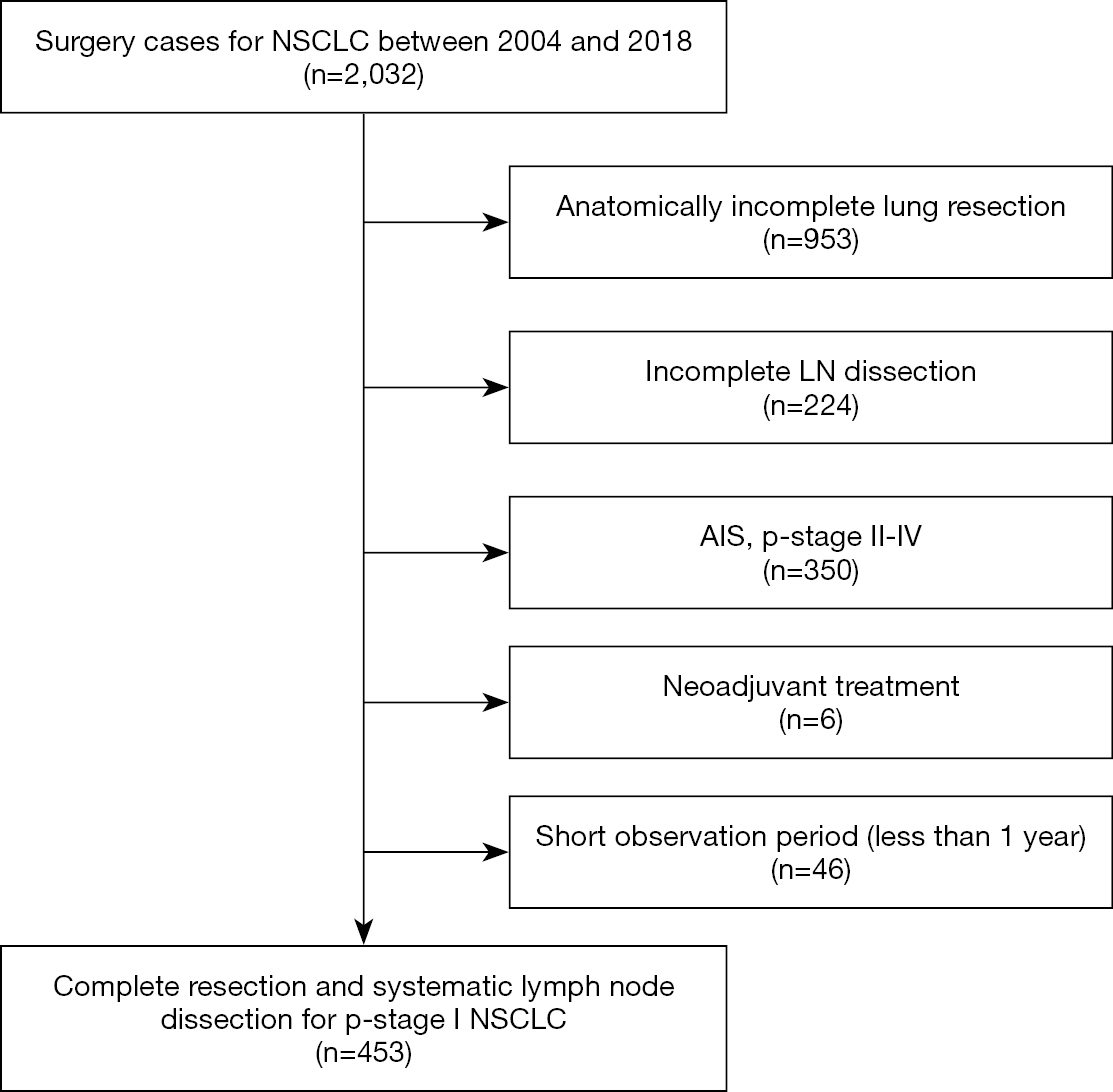 All slides of resected specimens were evaluated. All specimens were fixed in 10% formalin and embedded in paraffin. Serial 4-µm-thick sections were stained with hematoxylin/eosin and Elastica van Gieson to assess the degree of PL and VI. When required, we also stained them with D2-40 to evaluate the extent of LY. All cases were reviewed according to the 4th edition of the World Health Organization histological classification and staged according to the 8th edition of the TNM classification of the Union for International Cancer Control (14,15). Invasive size confirmed by pathologists was used as tumor size according to the current TNM staging.

Survival curves were plotted using the Kaplan-Meier method. The log-rank test was used to compare the postoperative survival. For survival analyses, univariate and multivariate analyses were performed using the Cox proportional hazards model. All variables with P<0.1 on univariate analysis were entered into the multivariate forward-backward stepwise model. Two-category comparisons were performed using chi-square or Fisher’s exact test, and Mann-Whitney U-test for quantitative data. All tests were two-sided, and statistical significance was defined as P<0.05. All analyses were performed using SPSS v25 (IBM Inc., Armonk, NY, USA).

In the survival analyses of 453 patients, median survival period was 137 months (95% confidence interval, 130–144 months). Five- and 10-year survival rates were 84.9% and 68.4% for OS, and 75.8% and 62.6% for RFS, respectively. Among 325 adenocarcinoma patients, 49 patients (15.1%) died and 49 (15.1%) patients had recurrent tumors. In 128 non-adenocarcinoma patients, 34 (26.6%) died and 23 cases (18.0%) relapsed. The results of the univariate and multivariate analysis of OS, RFS, and DSS, according to histological types, are summarized in Tables 2,3. In univariate survival analyses of adenocarcinomas, larger invasive size and presence of LY, VI, and PL, in addition to smoking history, significantly correlated with unfavorable prognosis. VI and PL were identified as independent prognostic factors among adenocarcinoma patients in multivariate analyses. Similar findings were observed in cases of non-adenocarcinoma. These findings indicate that the pathological factors, LY, VI, and PL, are not only prognostic factors but can also act as surrogate markers of tumor malignancy. 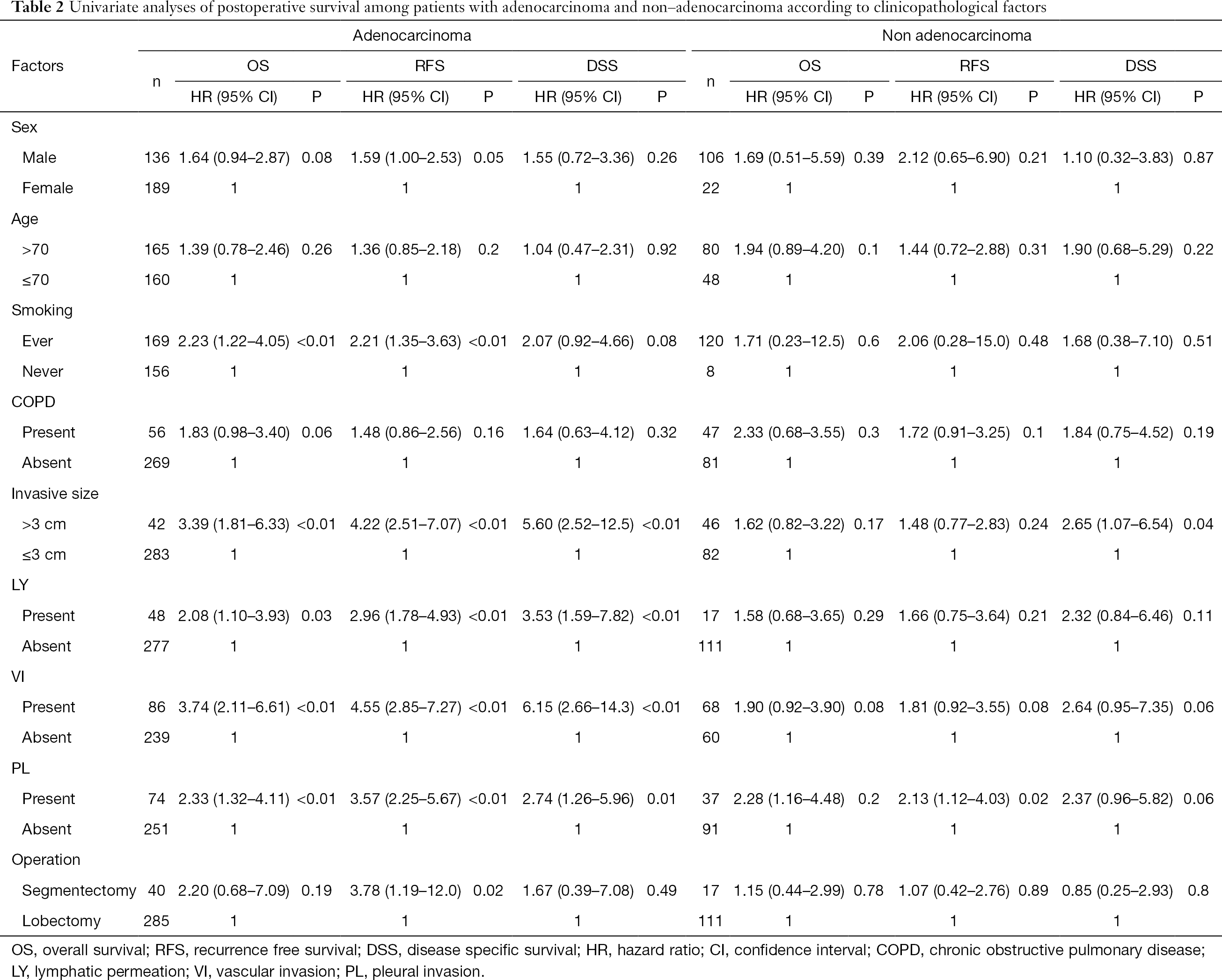 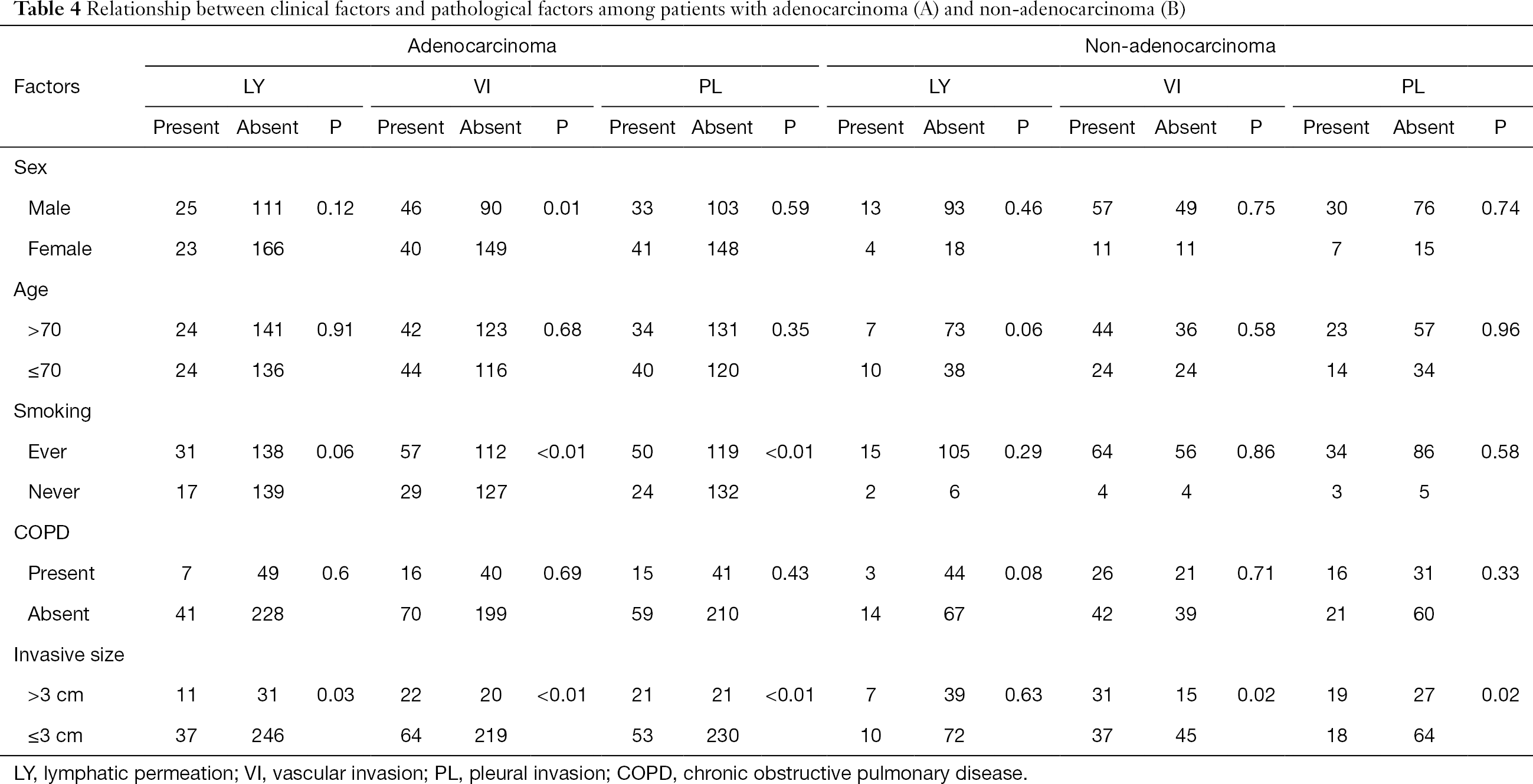 In the clinical data, we focused on the smoking history of patients who underwent resection for stage I NSCLC. Smoking status was evaluated using the following four parameters: cigarettes per day, number of years of smoking, pack-years, and number of years since smoking cessation. As summarized in Table 5, LY, VI, and PL were significantly associated with accumulative smoking habit in patients with adenocarcinoma. Particularly, long-term cessation of smoking could potentially mitigate local invasion of adenocarcinoma. In contrast, no apparent relationship between the duration of smoking and these factors was identified in non-adenocarcinomas.

Smoking influence on tumor progression according to invasive size in adenocarcinoma

Generally, as the invasive part of a tumor increases, its malignant characteristics accelerate, as is seen in “T” factors of TNM staging (16). We classified stage I adenocarcinomas into three groups according to the invasive size: ≤2, 2–3, and 3–4 cm. Although no strong effects of preoperative smoking on postoperative OS and DSS were confirmed, patients with ≤3 cm adenocarcinoma who had never smoked had favorable RFS (Figure 2). In terms of the relationship between smoking status and pathological factors, PL correlated with accumulative smoking in ≤2 cm adenocarcinomas; both VI and PL were related to heavy and current smoking in adenocarcinomas of 2–3 cm; and no apparent relationship was identified between them in adenocarcinomas >3 cm (Table 6).

Figure 2 Recurrence-free survival curves of patients with adenocarcinomas for various invasive tumor sizes (≤2, 2–3, 3–4 cm) and smoking status (ever vs. never). 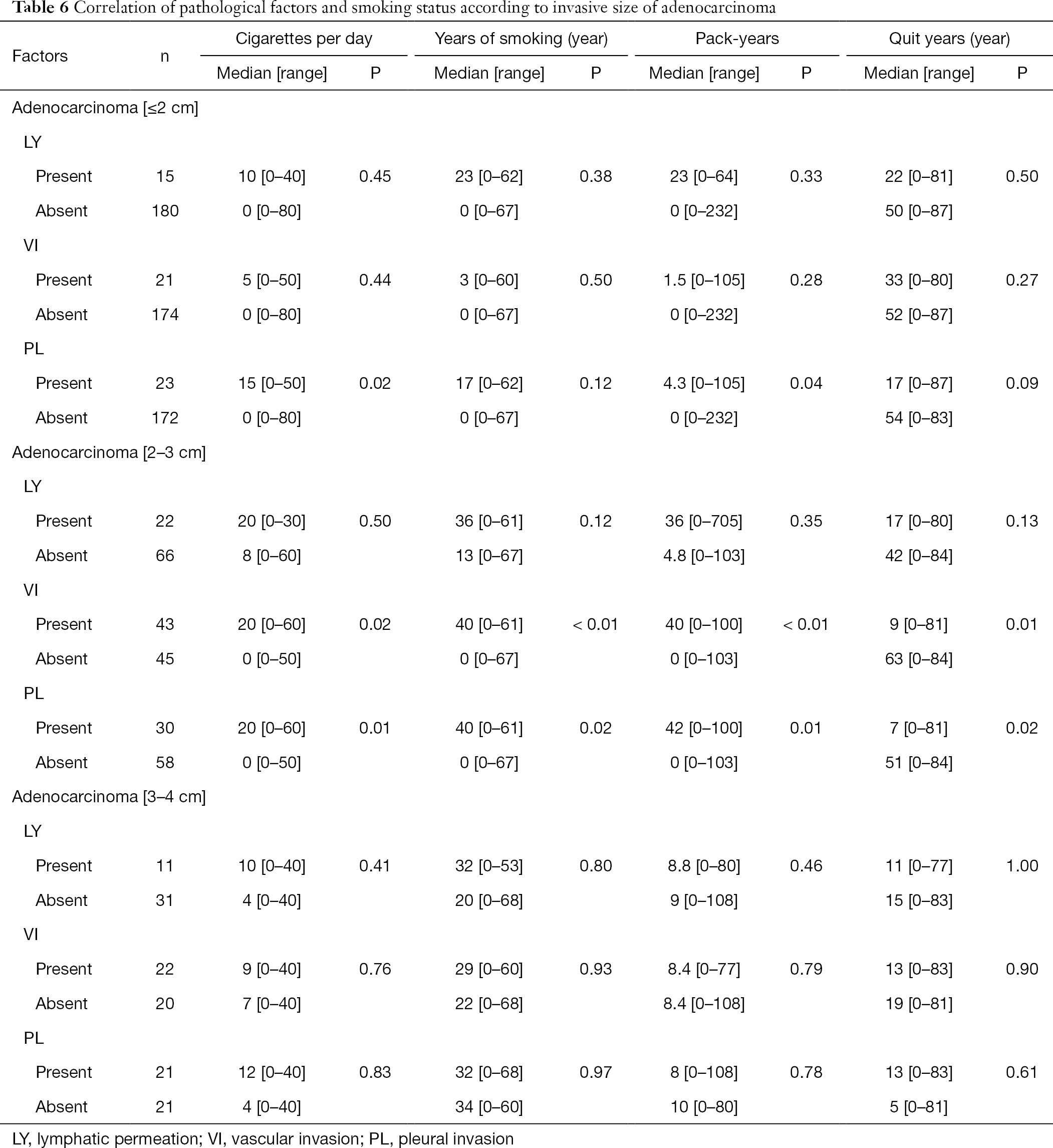 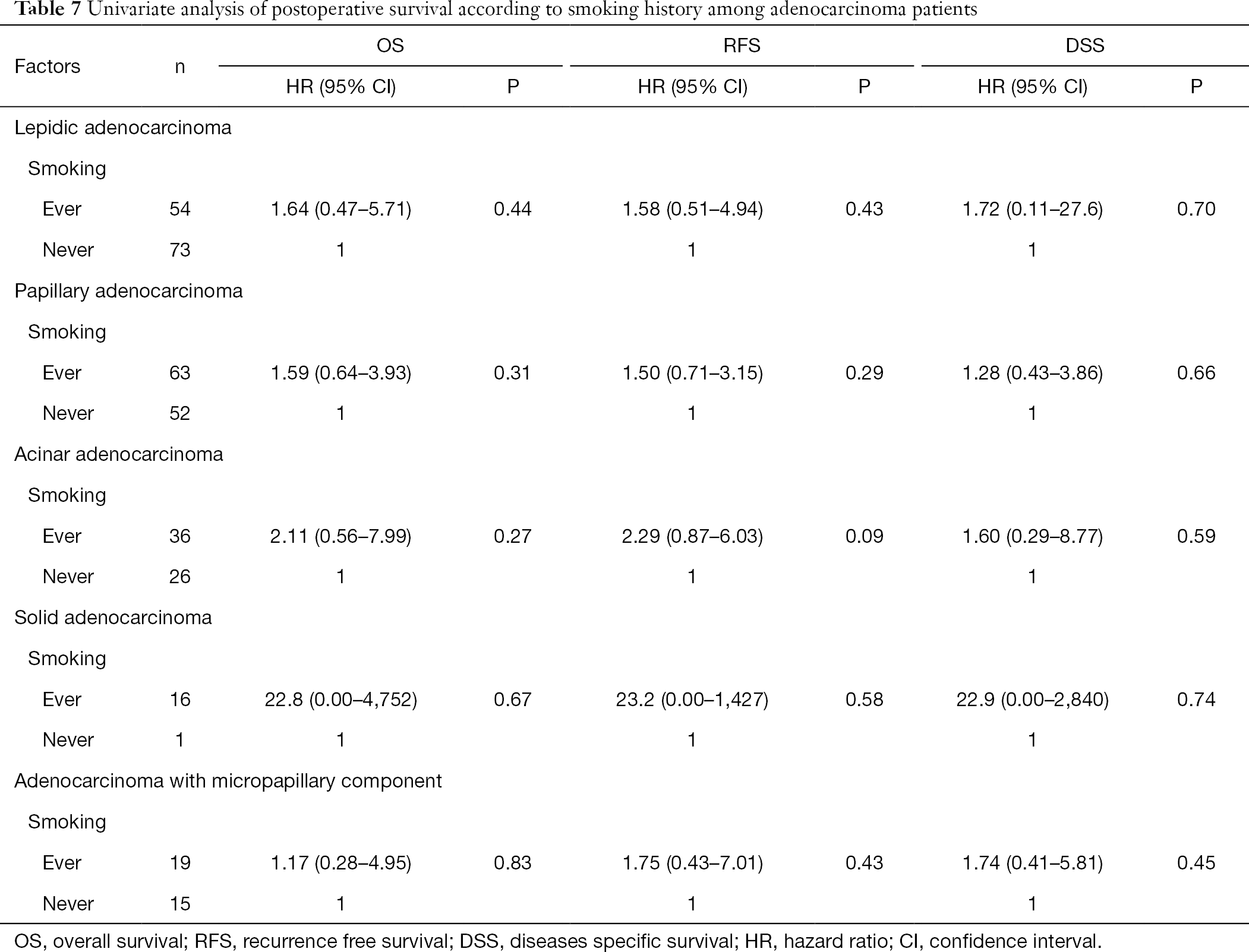 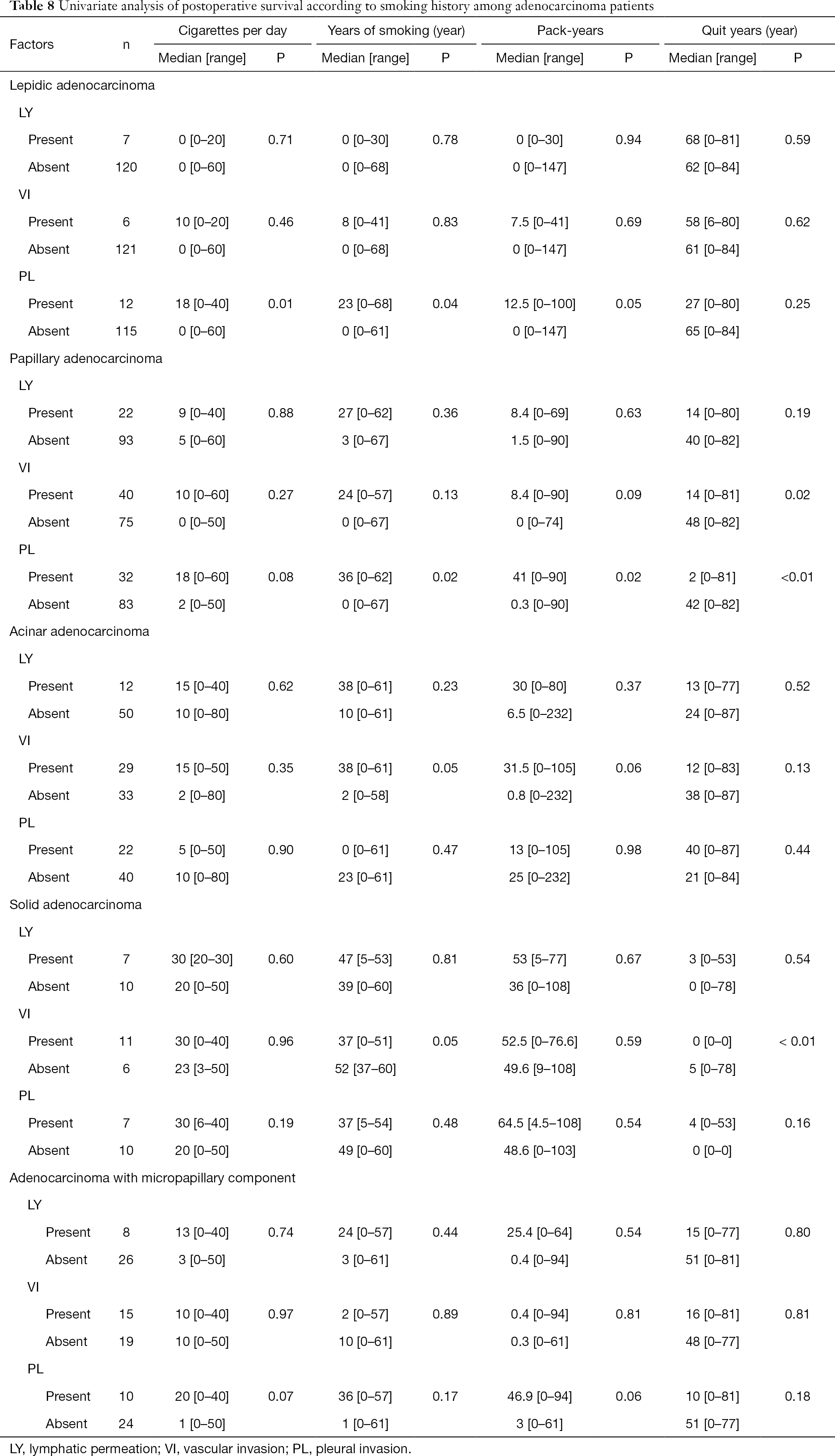 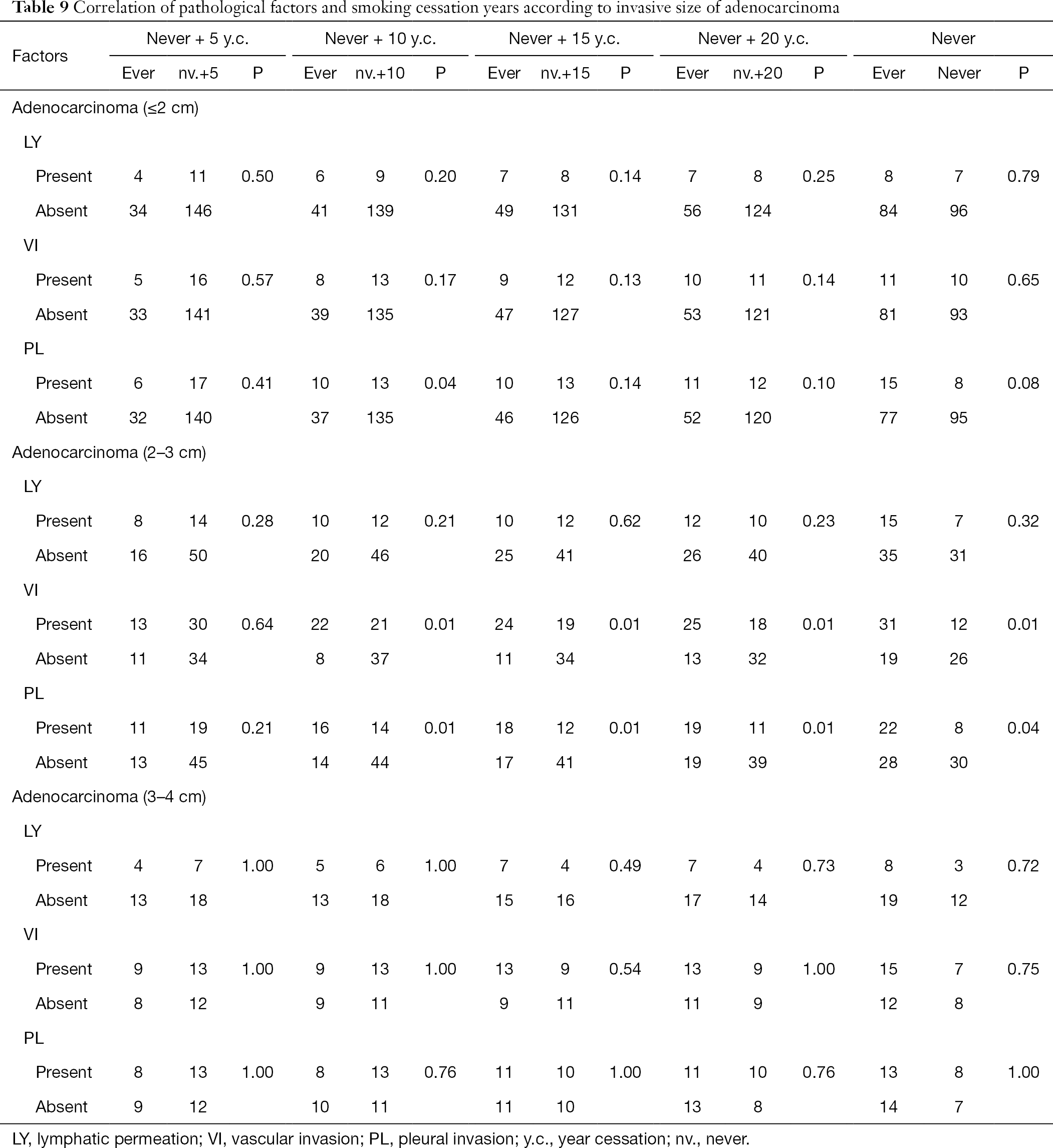 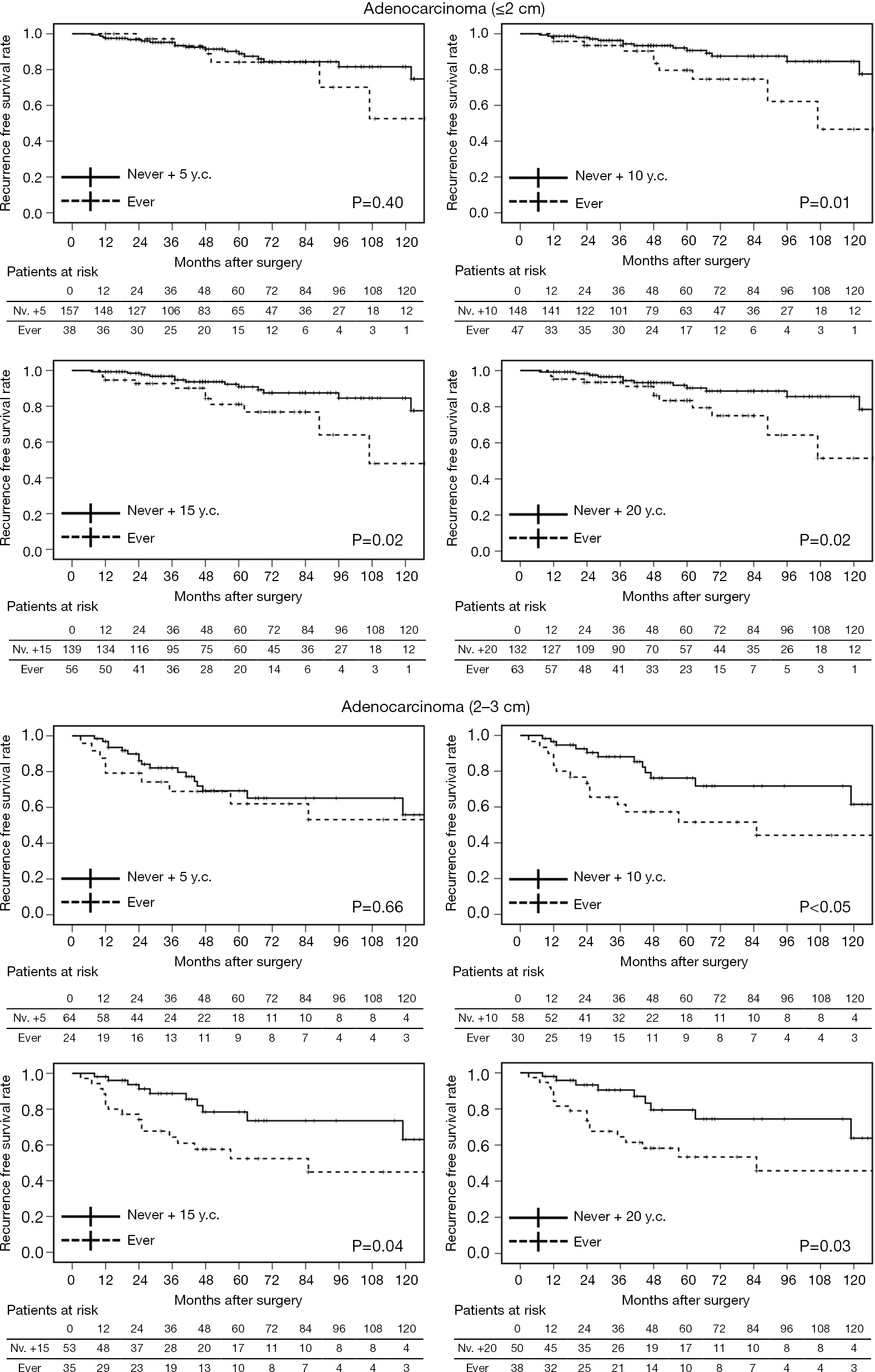 Pathological factors including LY, VI, and PL were significantly related to the degree of preoperative smoking in adenocarcinomas, particularly those with invasive diameters of 2–3 cm, whereas such a relationship was not identified in non-adenocarcinomas. As multiple studies have stated, our findings agree that some clinicopathological factors, including VI and PL, were unfavorable prognostic factors in surgically resected early-stage NSCLC (Tables 2,3) (4-6). Obviously, these pathological findings represent the process of metastasis of the tumor cells. As summarized in Tables 4-6, smoking would promote this process, particularly in adenocarcinomas ≤3 cm, which indicates that the malignant extent of adenocarcinoma in heavy smokers is relatively high and could lead to poor prognosis, despite the small size. Indeed, some clinical trials have demonstrated that chest screening tests, including screening CT, are recommended for high-risk patients with 30 or more pack-years of smoking (20). Needless to say, in addition to regular examinations of the chest, early interventions such as surgery are essential for current/ex-smokers with NSCLC to improve their survival.

Smoking is usually evaluated in “pack-years”. We also examined the number of cigarettes per day, smoking years, and smoking cessation years. Similar tendencies regarding the relationships with pathological factors were observed (Tables 5,6,8). Although we cannot comment on the evaluation method best suitable to predict postoperative survival in these patients, smoking is certainly associated with local invasion and progression of lung adenocarcinomas.

This study has some limitations. First, this was a retrospective study at single Institute; therefore, patient selection bias and time trend bias are inevitable. Second, we did not include the postoperative treatments such as adjuvant therapy and post-recurrence treatment in our analyses. Genetic differences may influence these treatment modalities, which could prolong survival after surgery and relapse. Third, we did not focus on postoperative smoking status because we did not ask patients if they had resumed smoking following surgery in every follow-up clinic. We also did not collect information regarding second-hand smoking. Fourth, our analyses regarding smoking history were based on medical records. Objective measurements such as carboxyhemoglobin and cotinine may have been more reliable biomarkers to evaluate tobacco smoking exposure. Fifth, in the analyses of non-adenocarcinomas, it is possible that true probability may not have been obtained owing to the small sample size. Additionally, postoperative survival for each segment of smoking cessation period should be compared to confirm the number of years after cessation that can improve the postoperative survival (e.g., never vs. 5 y.c. vs. 10 y.c. vs. 15 y.c. vs. 20 y.c.). Further investigations with a larger number of patients are required to substantiate our findings.

Reporting Checklist: The authors have completed the STROBE reporting checklist. Available at http://dx.doi.org/10.21037/tlcr-20-465

Conflicts of Interest: All authors have completed the ICMJE uniform disclosure form (available at http://dx.doi.org/10.21037/tlcr-20-465). TS reports grants from JSPS KAKENHI, during the conduct of the study. The other authors have no conflicts of interest to declare.

Ethical Statement: The authors are accountable for all aspects of the work in ensuring that questions related to the accuracy or integrity of any part of the work are appropriately investigated and resolved. This study was approved by our institutional review board in March 2020 (approved number #2483). The requirement of informed consent was waived due to the retrospective design of the study and because no personally identifiable information was collected. Clinical data including smoking history were recorded by medical staff (nurses and/or doctors) and used for statistical analysis. All procedures performed in this study were in accordance with the Declaration of Helsinki (as revised in 2013).