Non-small cell lung cancer (NSCLC) (80–85% of all lung cancers) continues to be one of the major causes of cancer related deaths around the world (1). For the vast majority of patients with advanced or metastatic disease (40–50% of all patients at time of diagnosis) platinum-based chemotherapy remains the only potential treatment and has led to significantly improved survival outcomes with a “plateau” of about 10–11 months median survival (2).

Subsequently, significant advances have been made with the introduction of pemetrexed, especially against the non-squamous cell subtype. The addition of this agent led to a further improvement in survival to 12–13 months (3) and up to 14 months with the introduction of maintenance therapy (4). Nonetheless, even with these therapies, the majority of patients with NSCLC do not attain prolonged disease control (5).

On the basis of these early efficacy signals, a series of randomized phase II and III studies have been conducted to evaluate the activity of PD-1/PD-L1 inhibitors in the second-line setting and beyond in NSCLC (7).

Notably, however, in these second-line studies (e.g., CheckMate-017 and CheckMate-057), the control arms received single-agent docetaxel (75 mg/m2), which set a low bar to clear [historical overall response rate (ORR) approximately 7%] (11). By contrast, in the first-line setting, PD-1/PD-L1 inhibitors will need to trump platinum-based doublet chemotherapy, which has been associated with much higher ORRs (25% to 35%) (2,3). For PD-1/PD-L1 inhibitors to succeed in this setting, a biomarker enrichment strategy might clearly be necessary.

Recently, the activity and improved tolerability of PD-1/PD-L1 inhibitors in NSCLC have provoked an increasing interest in moving these agents to the first-line setting. Gettinger et al. (12) reported findings from a cohort of 52 patients with advanced NSCLC treated with first-line nivolumab monotherapy (CheckMate-012, NCT01454102, a multi-arm phase IB study, N=412). Importantly, PD-L1 testing was not used to prospectively select patients for study entry, but mandatory pre-treatment biopsies were required to evaluate PD-L1 expression retrospectively. Confirmed responses were observed in 23% of patients, including complete responses in four patients (8%). Median progression-free survival (PFS) for nivolumab was 3.6 months, but the median duration of response was not reached (range, 4.2 to 25.8 months). Thus, as with other studies of PD-1/PD-L1 inhibitors, there was a suggestion of durable clinical responses. Indeed, the median OS in this patient population was noteworthy at 19.4 months. From this study the authors concluded that first-line nivolumab monotherapy demonstrated a tolerable safety profile and durable responses in NSCLC patients.

In another study Rizvi et al. (13), who reported a separate first-line cohort of CheckMate-012, evaluated nivolumab in combination with platinum-based doublet chemotherapy for first-line treatment of advanced or metastatic NSCLC (CheckMate-012, NCT01454102). Patients (N=56) received nivolumab plus platinum-based doublet chemotherapy concurrently every 3 weeks for four cycles followed by nivolumab alone until progression or unacceptable toxicity. Regimens were nivolumab (10 mg/kg) plus gemcitabine-cisplatin (squamous-cell) or pemetrexed-cisplatin (non-squamous) or nivolumab (5 or 10 mg/kg) plus paclitaxel-carboplatin (all histologies). The primary objective was to assess safety and tolerability. Secondary objectives included ORR and 24-week PFS rate; exploratory objectives included OS and response by tumour PD-L1 expression.

In this study confirmed responses were seen in 33% to 47% of patients across all chemotherapy arms. Notably, these response rates were not substantially different from those expected with platinum-based doublet chemotherapy alone, but 2-year OS rates offered a hint of additional activity, particularly in the nivolumab (5 mg/kg) plus carboplatin-paclitaxel arm.

Despite intriguing signals in certain subsets of CheckMate-012, it has to be highlighted that this was a non-randomized study and it was conducted with a relatively low number of patients. Moreover, the degree of benefit in both studies appeared to be modest. For instance, in the KEYNOTE-001 (NCT 01295827) study (14) pembrolizumab was associated with an ORR of 24.8% among treatment-naive patients, but the response rate increased to 50% among treatment-naive patients who were PD-L1 positive (proportion score >50%).

On the basis of these observations, two randomized phase III studies, CheckMate-026 and KEYNOTE-024, had been launched in PD-L1-positive NSCLC patients comparing platinum-based chemotherapy vs. nivolumab or pembrolizumab, respectively.

Results from the KEYNOTE-026 (NCT02142738) phase III trial (N=305) of pembrolizumab (200 mg, day 1, every 3 weeks up to 35 cycles or until documented progressive disease) vs. platinum-based chemotherapy as first-line therapy for patients with metastatic NSCLC that expresses PD-L1 (≥50%) have been published most recently (15). Pemetrexed maintenance therapy was permitted for patients with non-squamous histologies and patients harbouring sensitizing EGFR mutations and/or ALK translocations were not enrolled. In addition, patients randomized to the control arm had the option of crossing over to pembrolizumab upon disease progression. The trial’s primary endpoint was PFS and the secondary endpoint was OS. Pembrolizumab significantly improved PFS (10.3 versus 6.0 months, P<0.001, HR =0.50) compared with chemotherapy. In addition, the estimated rate of OS at 6 months was 80.2% in the pembrolizumab group versus 72.4% in the chemotherapy group (P=0.005). Furthermore, ORR was higher in the pembrolizumab group than in the chemotherapy group (44.8% versus 28.8%).

Based on the data presented so far an approval of pembrolizumab as first-line treatment for PD-L1-positive NSCLC patients is expected in the near future. This would then move nivolumab in the third line of treatment since the drug is only approved in the EU/US for NSCLC patients with prior chemotherapy treatment (16). However, it should be noted that only 23–28% of all patients with advanced NSCLC have a high level of PD-L1 expression, which is defined as membranous PD-L1 expression on at least 50% of tumour cells, regardless of the staining intensity (10,15).

By contrast, results from the CheckMate-026 (NCT02041533) phase III, open-label, randomized study of nivolumab as monotherapy vs. investigator’s choice chemotherapy in patients with advanced NSCLC have been detailed in parallel (17). Patients enrolled in that trial had received no prior systemic treatment for advanced or metastatic NSCLC and were tested positive for PD-L1 expression (cut-off threshold: ≥5%). The trial randomized 541 patients to receive either nivolumab (3 mg/kg every 2 weeks) or investigator’s choice chemotherapy in squamous patients (gemcitabine with cisplatin/gemcitabine with carboplatin/paclitaxel with carboplatin) and non-squamous patients (pemetrexed with cisplatin/pemetrexed with carboplatin) until disease progression, unacceptable toxicity, or completion of six cycles. The primary endpoint was PFS as assessed by the independent radiology review committee (IRRC). Secondary endpoint was OS. Again, patients harbouring sensitizing EGFR mutations and/or ALK translocations were not enrolled, and an optional cross-over was allowed.

The trial did not meet the primary endpoint of PFS in untreated, advanced NSCLC patients whose tumours expressed PD-L1 of at least 5%, and full results will be published in greater detail soon (17).

Meanwhile, data were published from a new analysis comparing nivolumab plus ipilimumab vs. nivolumab alone in previously untreated NSCLC patients (CheckMate-227, NCT02477826). Presented at the American Society of Clinical Oncology meeting this year (press release) the results showed that 57% of the combo patients responded, compared with the 28% in the nivolumab arm, and the response rates were higher in patients with higher levels of PD-L1 (18). Final results are expected to be published end of 2020.

In terms of future clinical studies, well-conducted randomized trials will be crucial in determining the role of PD-1/PD-L1 inhibitors in the first-line setting. Indeed, more than 11 such trials are currently ongoing (Table 1). 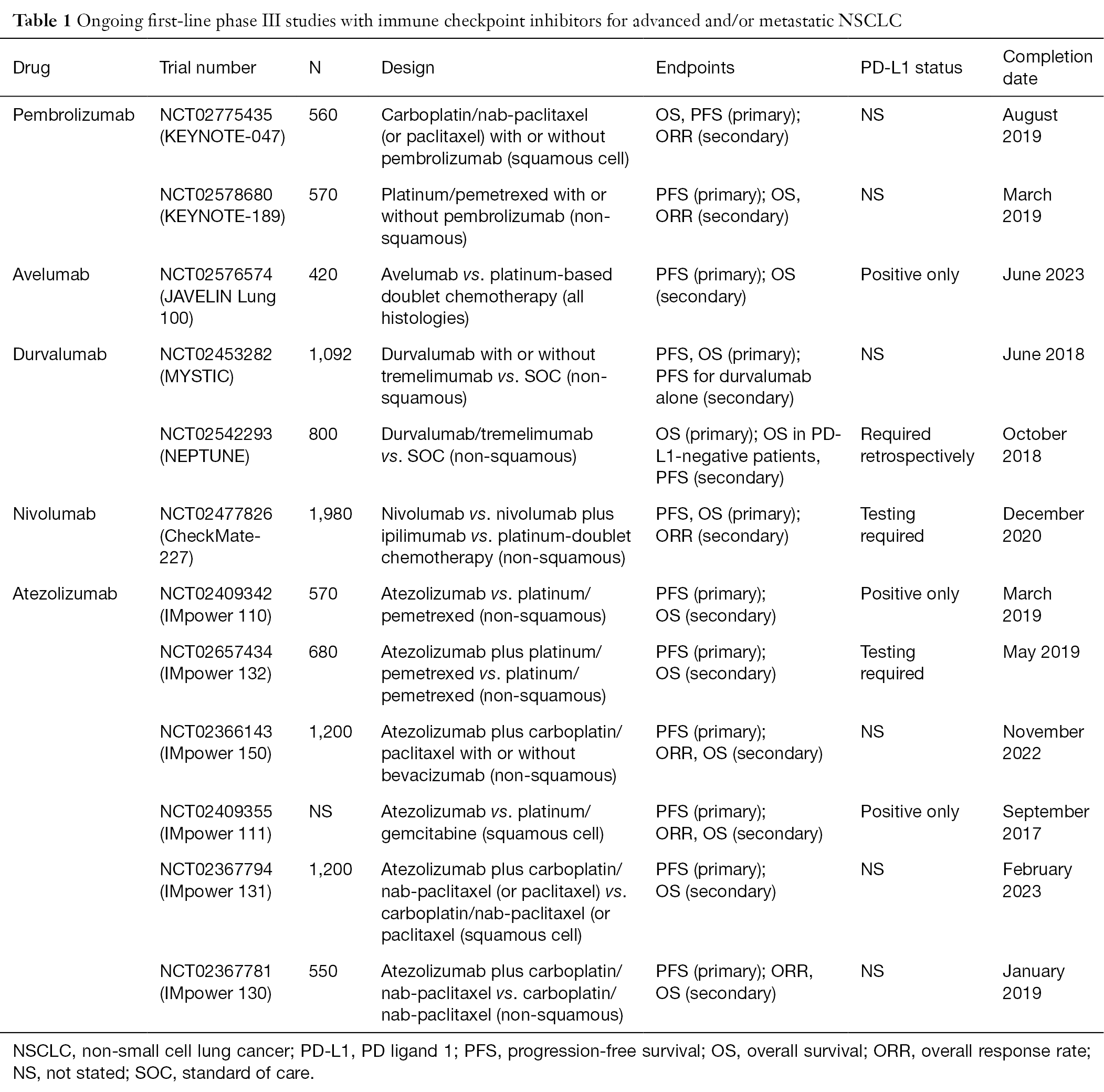 In addition, the combination of two immune checkpoint inhibitors [e.g., durvalumab (anti-PD-L1) and tremelimumab (anti-CTLA-4)] are also under evaluation and may provide an OS benefit for NSCLC patients. In this regard, data from two ongoing clinical trials (MYSTIC, NCT02453282 and NEPTUNE, NCT02542293) are eagerly awaited (Table 1).

This question remains what the more promising strategy would be? Unfortunately, current data are still too preliminary to draw firm conclusions, but it is conceivable that both approaches may be used for future clinical trials. In addition, it can be assumed that PD-1/PD-L1 inhibition alone may be sufficient in small, biomarker-defined subsets of patients (e.g., PD-L1-positive tumours), whereas combinations may be necessary for unselected or PD-L1-negative patient populations (19).

With the recent regulatory approvals of nivolumab (Opdivo®, Bristol-Myers Squibb, New York, USA) and pembrolizumab (Keytruda®, Merck & Co., Kenilworth, USA) in the US and Europe, first-line studies of PD-1/PD-L1 inhibitory monoclonal antibodies may now have to struggle with cross-over designs, making assessments of OS more difficult. As a result, a majority of ongoing phase III trials evaluating PD-1/PD-L1 inhibitors in the front-line setting still rely on PFS as a primary end point (Table 1).

In addition, it will be mandatory to incorporate tissue analyses into future trials of PD-1/PD-L1 inhibitors to facilitate insight into predictive biomarkers of response and resistance. This might be most relevant in the first-line setting because such patients generally have a number of other therapeutic options (e.g., treatment with TKIs, chemotherapy, monoclonal antibodies). Despite an emphasis on PD-L1 testing in ongoing trials, it is clear that the role of PD-L1 expression alone is far for being clear since there is still a number of pitfalls (e.g., heterogeneity of expression, threshold differences in PD-L1 assays, lack of a gold standard for PD-L1 positivity) (20).

In summary, despite these encouraging results it is unlikely that immune checkpoint inhibitors will completely replace platinum-based chemotherapy as first-line treatment for NSCLC, but the development of better predictive biomarkers may allow oncologists to identify particular subsets that are most likely to benefit from PD-1/PD-L1 pathway blockade in first-line, either alone or in combination with chemotherapy or other checkpoint inhibitors which are currently in clinical development. In addition, it remains to be seen whether immune checkpoint inhibitors may also be of benefit for first-line treatment of NSCLC patients harbouring sensitizing EGFR mutations and/or ALK translocations.

Conflicts of Interest: Prof. WC Dempke is an employee of Kyowa Kirin Pharmaceutical Development Ltd. (UK). Prof. K Fenchel has no conflicts of interest to declare.