Dr. Shiono graduated from Yamagata University School of Medicine in 1992. He received his PhD from the Department of Hygiene and Preventive Medicine from the Yamagata University School of Medicine. Following his fellowship in Thoracic Surgery at Yamagata University Hospital, he became Chief of Thoracic Surgery at Yamagata Prefectural Nihonkai Hospital in 2001. From 2002 to 2004, he worked as a resident of the Division of Thoracic Oncology, National Cancer Center Hospital East, Chiba. Currently, he is the Chief of the Department of Thoracic Surgery, Yamagata Prefectural Central Hospital. Dr. Shiono’s medical interests includes multi-disciplinary treatment for lung cancer, sublobar resection for lung cancer, surgical pathology, perioperative management, and pulmonary metastasis.

Francesco Passiglia, MD, is Assistant Professor of Medical Oncology at University of Turin, Italy. Currently, he is consultant at the Thoracic Oncology Unit of San Luigi Hospital, Orbassano (Turin), where he is daily dedicated to the diagnosis and treatment of patients with thoracic malignancies. He is involved as PI or SI in many international and national clinical trials as well as translational research project mostly focusing on non-small cell lung cancer. Since October 2019 he is the scientific secretary of the Italian Association of Medical Oncology (AIOM) Lung Cancer Clinical Practice Guidelines. He is member of international scientific societies including the American Society of Clinical Oncology (ASCO), the European Society of Medical Oncology (ESMO), the International Association for the Study of Lung Cancer (IASLC). He is the author or co-author of over 50 publications in peer-reviewed journals. 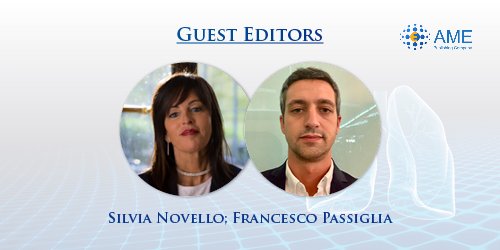