Ground-glass opacity (GGO) is a radiological finding in computed tomography (CT) consisting of a hazy opacity that does not obscure the underlying bronchial structures or pulmonary vessels (1). Pure GGOs are those with no solid components, whereas part-solid GGOs contain both GGO and a solid component. Pulmonary nodules with GGO have been increasingly encountered in routine clinical practice with the increasingly widespread use of CT and the increased resolution of CT imaging. The recent positive results of the National Lung Screening Trial, which reported a 20% decrease in mortality from lung cancer as a result of low-dose CT screening for patients at high risk of developing lung cancer (2), are anticipated to support the use of CT examinations and to increase the detection of GGO lesions.

GGO can be a manifestation of a wide variety of clinical features, including malignancies and benign conditions, such as focal interstitial fibrosis, inflammation, and hemorrhage (3). However, lesions with GGO that do not disappear are often lung cancer or its precursor lesions (4). Favorable prognoses for the surgical resection of lesions with a considerable amount of GGO have been reported in several retrospective studies, in which the relapse rate was reported to be null (5-8).

Because some lesions with GGO remain unchanged for years, it is unclear whether all such lesions should be surgically resected, including those that microscopy shows to contain cancer cells. It has also not yet been established which surgical procedures are well-balanced. In this article, we review the literature on GGO, with special emphasis on management of GGO-predominant pulmonary lesions.

Pathological features of lesions with GGO

In 1995, Noguchi et al. reviewed 236 surgically resected small peripheral adenocarcinomas ≤2 cm in diameter and proposed a histologic classification of 6 types based on tumor growth patterns (9). Type A, localized bronchioloalveolar carcinoma (BAC), revealed the replacement of alveolar-lining epithelial cells with a relatively thin stroma. Type B was characterized by localized BAC with focal structural collapse of alveoli. Type C was characterized by localized BAC with foci of active fibroblastic proliferation. Type D (poorly differentiated adenocarcinoma), Type E (tubular adenocarcinoma) and Type F (papillary adenocarcinoma) showed compressive and expanding growth. Types A and B showed no lymph node metastasis and had a better 5-year survival rate (100%) than did Type C (75%) or Types D, E, and F (52%). According to Noguchi’s classification, GGO can be found in Type A, B and C tumors that show a replacement growth pattern along the alveolar lining cells; for example, Yang et al. reported that the proportion of GGO in each of these tumor types was 92%, 52%, and 20%, respectively (10).

In 2011, the International Association for the Study of Lung Cancer/American Thoracic Society/European Respiratory Society (IASLC/ATS/ERS) proposed a new international multidisciplinary classification of lung adenocarcinoma (11). The terms BAC and mixed subtype adenocarcinoma are no longer used because these terms were applied to a broad spectrum of tumors. Adenocarcinomas are classified as preinvasive lesions [including atypical adenomatous hyperplasia (AAH) and adenocarcinoma in situ (AIS)], minimally invasive adenocarcinoma (MIA), and invasive adenocarcinoma. AAH is a localized small proliferation of atypical Type II pneumocytes and/or Clara cells lining the alveolar walls and respiratory bronchioles. AIS is a small (≤3 cm) solitary adenocarcinoma with pure lepidic growth, and the complete resection of AIS achieves 100% disease-specific survival. AIS corresponds to Types A and B in Noguchi’s classification. MIA is a small (≤3 cm) solitary adenocarcinoma with a predominantly lepidic pattern and ≤5 mm invasion at the largest dimension. MIA does not invade lymphatics, blood vessels, or the pleura and contains no necrosis; therefore, complete resection achieves nearly 100% disease-specific survival. MIA roughly coincides with Type C in Noguchi’s classification. In general, lung adenocarcinomas are thought to follow a linear multistep progression whereby AAH progresses to AIS, which is followed by invasive adenocarcinoma.

To discuss the association between the radiological findings of GGO and the pathological diagnosis based on the new IASLC/ATS/ERS classification, we present the updated data from our previous study on lesions with GGO. The inclusion criteria for the study were the following: (I) a lesion diameter ≤3 cm; (II) a GGO proportion >50%; and (III) observation without treatment in the prior 6 months (12). To date, 32 of the 120 lesions were surgically resected. The histological diagnoses were AAH in 3 lesions, AIS in 12, MIA in 11, and invasive adenocarcinoma in 6.

The correlation between the changes in size and the histological types is shown in Figure 1. None of the 3 AAHs increased in size, whereas some of the tumors belonging to the types other than AAH did so. From these observations, it is impossible to determine histopathologic types by changes in lesion size. 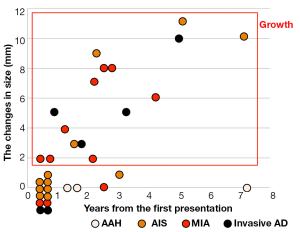 Figure 1 The correlation between the changes in size from the first presentation to the last CT examination and the histological types. AAH existed only in the no-growth group, whereas the remaining histological types existed in both groups

The association between the radiological findings at the time of the resection and the pathological types is shown in Figure 2. The solid component proportions were categorized as 0%, 1-25%, 26-50%, and 51-100%. Preinvasive lesions, including AAH and AIS, are typically manifested as pure GGOs, whereas more advanced adenocarcinomas may include a larger solid component within the GGO region. 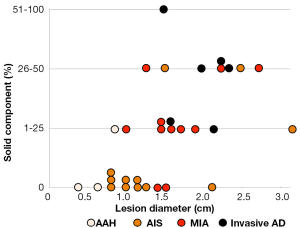 Figure 2 The association between the radiological findings at the time of resection and the pathological types. Solid component proportions are categorized as 0%, 1-25%, 26-50%, and 51-100%. The tendency toward pathological invasiveness is shown, along with the consistent increases in both the size and the solid component

Genetic features of lesions with GGO

The association between radiological findings of GGO and pathological invasiveness

The accuracy rate of a CT-guided core needle biopsy for nodules with GGO depends on the lesion diameter and the proportion of the GGO component; it ranges from 64.6% to 93% (17-19). Recent CT fluoroscopy-guided biopsy has a higher accuracy rate ranging from 82% to 97% (20-22). Of course, we should interpret these results in light of a possible publication bias. The article on the new IASLC/ATS/ERS classification states that AIS and MIA should not be diagnosed in small biopsies or cytology specimens and that if a noninvasive pattern is present in a small biopsy, it should be referred to as a lepidic growth pattern (11). Therefore, diagnosis usually depends on radiographic findings, which correlate closely with the pathologic diagnosis in the determination of treatment options, including surgery.

A GGO proportion of 50% or more is suggested as a cutoff value for pathological noninvasiveness in each lesion size category (Table 1) (23-28). In lesions ≤3 cm with a GGO component <50%, the rate of lymph node metastasis ranges from 10% to 26% (23-28). Based on these data, in this article, we mainly address pulmonary nodules with GGO proportion >50%.

Appropriate timing for the decision to surgically resect

Recently, the Fleischner Society proposed recommendations for the management of GGOs (31). Briefly, they suggested that biopsy or surgical resection should be considered if the solid component becomes 5 mm or more.

The Japanese Society of CT Screening recommends that lesions with GGO ≥15 mm or a solid component ≥5 mm should be resected or biopsied (32).

Considering the Fleischner Society and the Japanese Society of CT Screening recommendations, we propose a conservative follow-up algorithm for pulmonary lesions ≤3 cm with a GGO component >50%, as illustrated in Figure 3. 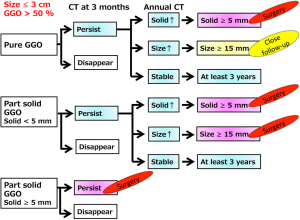 Observation with CT examinations for lesions with GGO

It is essential to understand the natural history of GGOs to discuss the conservative follow-up of GGO. Several reports have revealed that some lesions with GGO exhibit gradual growth, whereas others persist for years without changes (33-36). Representative CT images are presented in Figure 4. Recently, 5 reports analyzing more than 100 nodules with GGO have been published, and the results are summarized in Table 2 (12,37-40). Our study is among these reports, and our results are further illustrated in Figure 5 (12). Although the inclusion criteria and the definition of growth are variable, 10% to 27% of GGOs gradually grow, whereas others persist without changes for years (12,37-40). It should be noted that according to the updated data from our study, even some part-solid GGOs remained unchanged for more than 3 years; these included 45 pure GGOs (size range, 4 to 16 mm) and 7 part-solid GGOs (size range, 7 to 12 mm). However, the solid component proportions of these 7 part-solid GGOs were only 1-25%. 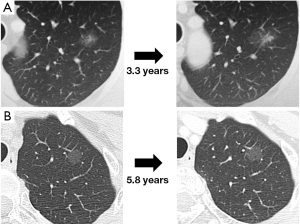 Figure 4 Computed tomography images of two representative pulmonary nodules with GGOs. A, A part-solid GGO lesion became larger, and its solid component increased after 3.3 years. B, A pure GGO lesion persisted without changing in size for 5.8 years 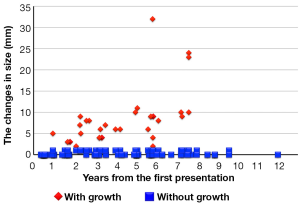 Figure 5 Changes in the sizes of the 108 evaluated lesions from the time of the first presentation to the last CT scan. Twenty-nine lesions (red) increased by 2 mm or more, whereas the remaining 79 lesions (blue) persisted without changing in size. Adapted with permission from Wolters Kluwer Health©. Kobayashi Y. et al. J Thorac Oncol 2013;8:309-14 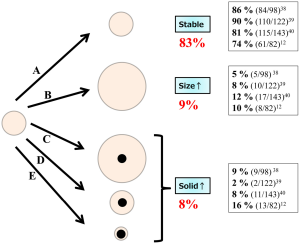 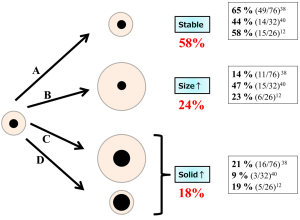 How long should we follow up nodules with GGO?

We discuss the appropriate follow-up period based on the VDT of GGO-predominant lesions. We computationally simulated the size changes of pure GGO lesions using the VDT of 813 to 880 days. A 5-mm lesion would grow to 6.7 to 6.8 mm after 3 years of observation, whereas a 10-mm lesion would grow to 13.3 to 13.6 mm within the same period (12). Are these small changes in size (i.e., 1.7 to 1.8 mm and 3.3 to 3.6 mm) detectable on CT examinations? Measurement errors should be considered when we evaluate the increase in size. Kakinuma et al. reported that increase in diameter of >1.72 mm is necessary to identify true growth, considering interobserver measurement errors (44). Therefore, these calculated changes in size should be detectable with CT analysis, and the follow up period of 3 years seems to be reasonable.

It should be noted that the range of the VDTs stated above was wide in each study, and a few lesions actually began to grow after 3 years of observation (37-39). However, it is reasonable to regard the 3-year observation follow-up period as a benchmark for GGOs because the exceptional cases are in the minority.

In contrast, local recurrence has also been reported. Nakao et al. reported that 4 out of 26 patients with GGO lesions ≤2 cm developed either cut-end recurrence or metachronous primary disease more than 5 years after the initial limited resection (48). In their study, a resection margin greater than 1 cm was ensured (48). Possible reasons for the cut-end recurrence are the difficulty of intraoperatively localizing the GGO and the vague GGO border. The preoperative CT-guided injection of agar near the target GGO lesion has been reported to be useful for making deeply located lesions palpable (49). Furthermore, intraoperative ultrasonography facilitated effective localization in a completely deflated lung and was useful for evaluating surgical margins (50). This method can be performed in complete video-assisted thoracic surgery.

Surgery achieves favorable prognoses in patients with GGO-predominant lesions. However, the natural history of GGOs has been gradually clarified; some of them grow or increase their solid component, whereas others remain unchanged for years. Therefore, it remains unclear whether all GGO-predominant lesions should be surgically resected, and whether lesions without changes may not require resection. To distinguish GGOs with growth from those without growth, a 3-year observation period is a reasonable benchmark for follow-up. Future studies on the genetic differences between lesions with and without growth will help establish an appropriate management algorithm.