Lung cancer is one of the refractory malignancies and the leading cause of cancer death worldwide (1-3). This disease is often diagnosed at the advanced stages, in which the treatment is less effective, and thus it still has a poor outcome. To improve a worse prognosis, various researches have been conducted. One of the significant research progress is the discovery of the somatic activating mutations in the tyrosine kinase domain of epidermal growth factor receptor (EGFR) (4-6). These mutations mainly consist of exon 19 deletion and exon 21 point mutation (L858R), and frequently occur in adenocarcinoma, female, East Asian, and never smokers (7). Lung cancers with EGFR activating mutations initially well respond to EGFR tyrosine kinase inhibitors (TKIs), such as gefitinib and erlotinib (4-6). EGFR-TKIs showed prolonged disease-free survival in phase III clinical trials (8-10). However, the tumors eventually acquire the resistance to TKIs, which is the issue to be overcome. One of the major mechanisms for the acquired resistance to TKIs is a secondary EGFR mutation T790M in exon 20 (11,12). T790M mutations may exist in treatment-naïve tumors, and the clones with T790M are selected in the course of the TKI treatment (13). More recently, immune checkpoint inhibitors have brought change to the treatment of lung cancer and showed the promising therapeutic effect (14). In this manner, the treatment of lung cancer has been drastically changed. However, to improve the outcome of lung cancer more, it is necessary to further understand molecular oncology, and one of the approaches may be the comprehension of cancer susceptibility including inherited germline alterations.

Malignant tumors develop due to the accumulation of the mutations in a portion of genes, which provide growth advantage. Systematic resequencing of cancer genomes led to the discovery of the new cancer-related genes. While many somatic mutations are observed in cancers, most of them are likely to be “passengers”, which do not contribute to carcinogenesis. On the other hand, “driver” mutations exist in a subset of somatic mutations, which are responsible to develop cancers (27). In lung cancer, several gene mutations are reported to be drivers. In addition to EGFR described above, mutations of KRAS, ALK, human epidermal growth factor receptor 2 (HER2), BRAF, PIK3CA, AKT1, MAP2K1 and MET are reported to be drivers in lung cancer (28). These alterations are potential therapeutic targets, and molecular targeting drugs such as EGFR-TKI are developed. 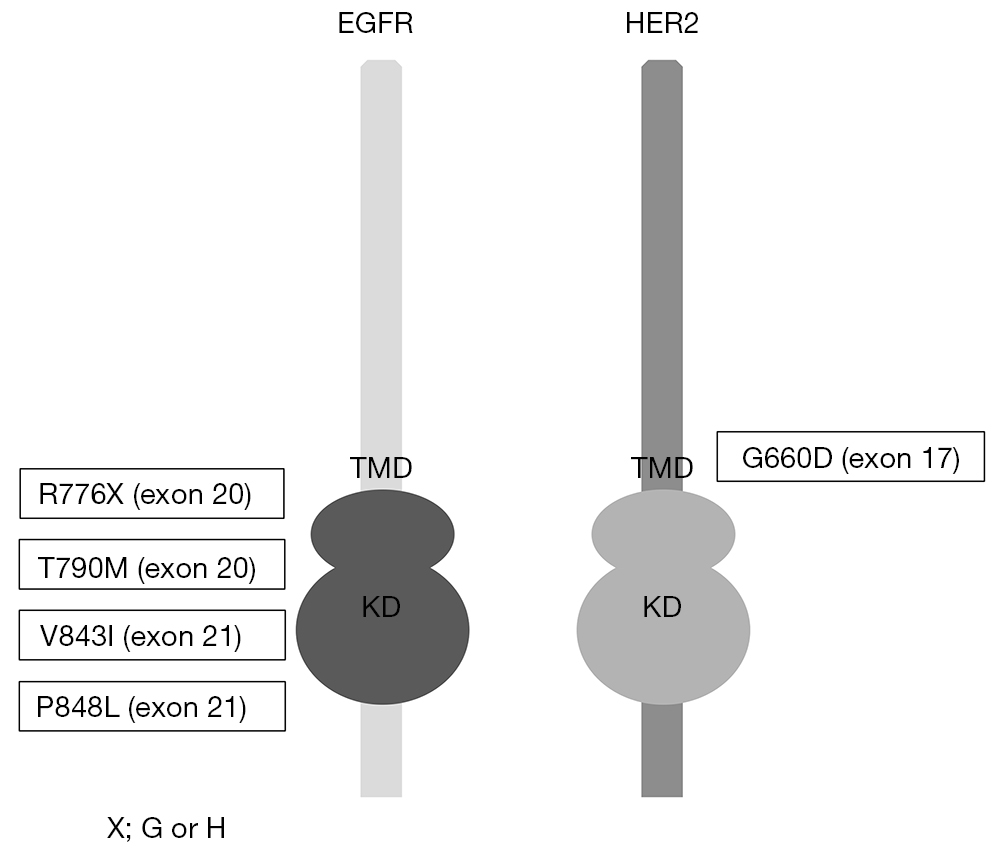 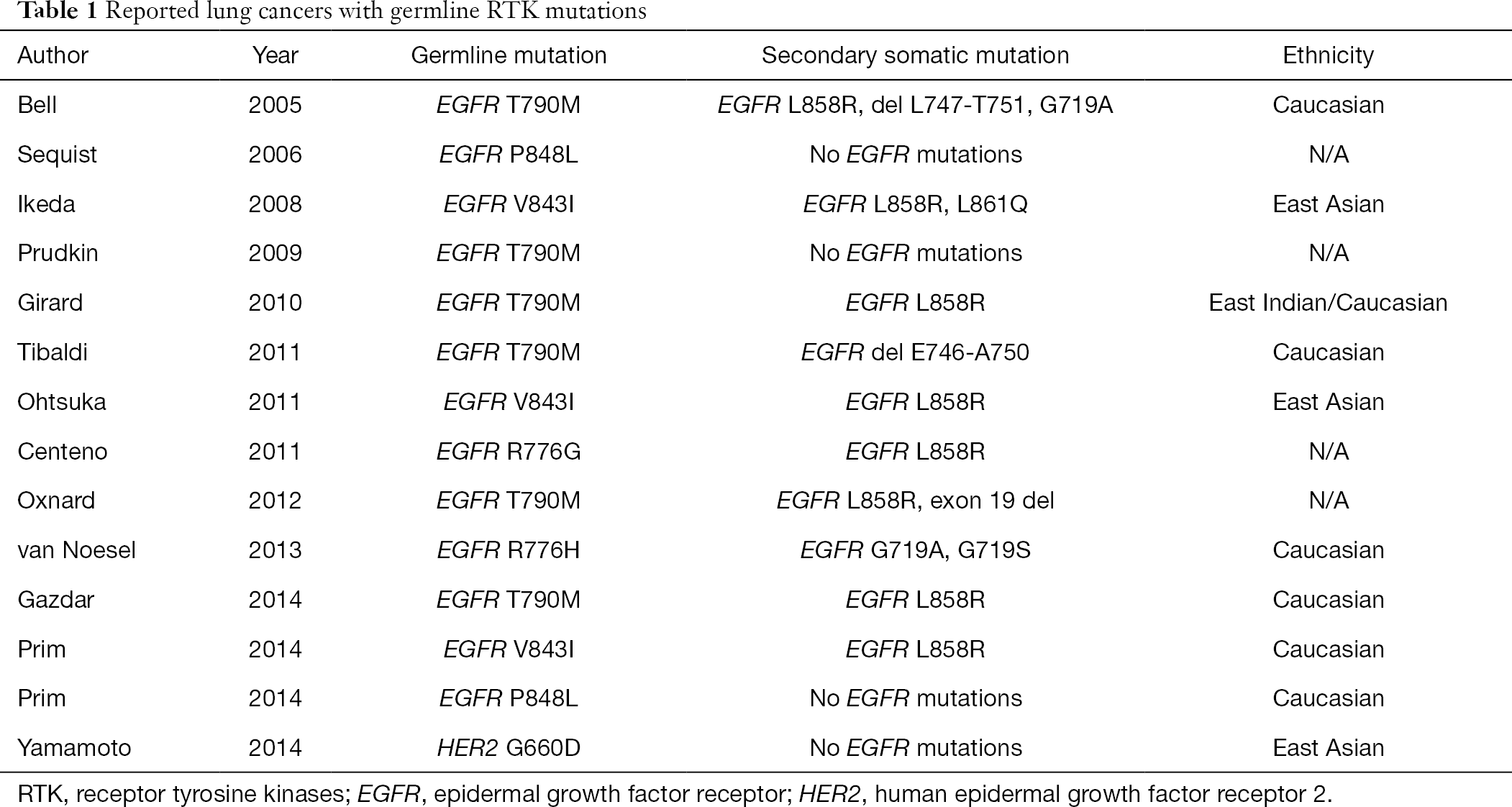 There is a possibility for the oncogenes other than EGFR to cause inherited lung cancers. We previously reported a family of Japanese descent with inherited lung cancers, in which germline HER2 mutations were detected (41). The proband was 53-year-old female at the time of the analysis with multiple lung adenocarcinomas in the bilateral lungs. She was a light smoker with 1.2-pack-year history of smoking. In addition, normal-appearing lung parenchyma obtained from a lobectomy in the proband revealed innumerable small preinvasive lesions, implying the presence of precancerous changes throughout the lung. Her mother, who was a never smoker, also suffered from multiple lung adenocarcinomas. We performed exome sequencing using tumor and blood samples of affected and unaffected family members. Novel germline HER2 mutations G660D were detected in the transmembrane domain, although reported HER2 somatic mutations are located in the kinase domain (42,43). In contrast to the lung cancers with germline EGFR mutations, we were not able to detect secondary somatic mutations of the genes known to cause lung cancers including EGFR (Table 1). We also confirmed no copy number gain of HER2 in the examined tumors. Based on our in vitro analyses (44), we administered HER2 inhibitor afatinib to the proband and achieved partial response (45). We tested the mutational status of HER2 using the blood sample for the proband’s daughter, who received the genetic counseling before testing and after the results were obtained. She also had germline HER2 G660D mutation. Her tobacco exposure was 4.5 pack-years, indicating a light smoker. Computed tomography (CT) scan of the chest for her at the age of 30 is shown in Figure 2. Multiple ground-glass nodules in bilateral lungs were observed, similar to the carriers with germline EGFR T790M mutations. In this pedigree, among nine lung cancer patients, female patients are six, accounting for 66.7% (41). Although information of smoking status in this pedigree is limited to only the proband (with lung cancer), her mother (with lung cancer) and her daughter (carrier with multiple ground glass nodules), those three members are never or light smokers. Therefore, there is also the possibility that germline HER2 transmembrane mutations target female never smokers, same as germline EGFR T790M mutations.

Figure 2 Computed tomography (CT) scan of the chest of the proband’s daughter in the pedigree with germline HER2 G660D mutation at the age of 30. Multiple ground-glass nodules in bilateral lungs are observed.

Germline mutations other than EGFR/HER2 that predispose to lung cancer

There are several reports that describe germline mutations other than EGFR/HER2, which predispose to lung cancer. Germline mutation of BRCA-associated protein-1 (BAP1) has been associated with the high risk for malignant mesothelioma, lung adenocarcinoma, uveal melanoma, and cutaneous melanoma (46). Germline BRCA1 mutation was detected in a patient with non-small cell lung cancer who responded to cisplatin/gemcitabine plus HSP90 inhibitor DEBIO0931 (47). Rare variant BRCA2 K3326X was reported to be associated with squamous cell lung cancer (48). A familial CDKN2A mutation R112dup has been associated with an increased risk of lung, head and neck and gastroesophageal cancer in patients who smoke (49). LKB1 is mutated in the germ-line of patients with the Peutz-Jeghers syndrome, which have an increased incidence of several cancers including lung cancers (50). Germline SFTP2A mutation is reported to cause familial idiopathic pulmonary fibrosis and lung cancer (51).

Next generation sequencing technology makes it possible to perform comprehensive analysis of genome in high speed. Some studies successfully narrowed down the several candidate genes (22,52). While functional analysis is critical, accumulation of these knowledge will lead to identification of causative genes, which results in elucidating carcinogenesis of lung cancer as well as in developing the new therapeutic strategies of lung cancer.

This work was supported by a Management Expenses Grants for National University Corporations in Japan.