In 1994, the first widely accepted tumor, node and metastasis (TNM) classification for malignant pleural mesothelioma (MPM) was published by the International Mesothelioma Interest Group (IMIG) (1). This was the result of a consensus meeting in June 1994 during the Seventh World Conference of the International Association for the Study of Lung Cancer (IASLC). Before this staging system, diagnosing and accurately staging MPM was a challenging task as clear guidelines or a universally accepted classification for staging MPM did not yet exist. This was the first MPM staging system that was based on outcomes of several retrospective series and clinical trials. This TNM classification was then also adopted and revised by the American Joint Commission on Cancer (AJCC) and the Union for International Cancer Control (UICC) leading to the previously used seventh edition of the classification (2-4). However, over the years more and more limitations of this staging system became apparent. First of all, the data used for establishing the classification was mainly derived from small single institution retrospective series (5). Furthermore, translating clinical and pathological findings into a corresponding TNM stage sometimes proved quite difficult. To address these matters, in 2016 the IASLC published a number of recommendations for the eighth TNM classification for MPM based on analysis of recent large retrospective series and clinical trials. With regards to the previous edition, a number of important revisions have been made in the different descriptors (6-8).

The T component of the TNM classification describes the primary tumor site and is quite challenging to apply in MPM due to its unconventional growth pattern. Unlike other malignancies, there is no concentrically enlarging primary tumor but rather multiple nodules that may become confluent and spread along the pleural surfaces often accompanied with pleural effusions (Figure 1) (6,9). Furthermore, unlike the staging systems for most other malignancies, tumor volume is not one of the main descriptors of disease extent even though evidence indicates that there is an effect on prognosis (10,11). The previous TNM staging system was proposed by the IMIG in 1994 after a meeting in which data from a number of retrospective series and clinical trials were presented. T descriptors were then formulated and published after review by members of the IMIG (1). Due to the fact that most of the data that was used for this classification was based on surgical research, some difficulties came to light when the T descriptors were applied in clinical settings (12). In an ideal setting, the T component should provide information on the prognosis and survival should be inversely related to each ascending T category. 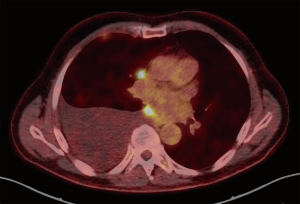 In the seventh TNM classification as proposed by the IMIG, T1 was divided into T1a and T1b with T1a describing very early tumor that only involved the ipsilateral parietal pleura and no visceral pleura. With T1b, the tumor was slightly more advanced and involved both the parietal and visceral pleura. This distinction was based on a prospective study in 1993 performed by Boutin et al. in which thoracoscopic staging performed in 66 patients revealed a significant difference in survival (32.7 months with T1a and 7 months in T1b) (13). T2 referred to tumors that involve the ipsilateral pleural surfaces and involve at least one of the following aspects: confluent visceral pleural tumor including the fissure, invasion of the diaphragmatic muscle and/or invasion of the lung parenchyma. T3 tumors describe locally advanced tumors that are still potentially amenable to surgical resection and involve any of the ipsilateral pleural surfaces with at least one of the following features: invasion of the endothoracic fascia, invasion of the mediastinal fat, solitary focus invading soft tissues of chest wall and/or non-transmural involvement of pericardium (1). 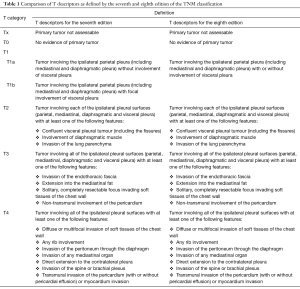 The N component of the TNM classification is an important prognostic factor for survival in MPM. Patients with nodal metastases in MPM are known to have significantly lower survival rates than patients without nodal metastases (5,14-17). The N categories published by the IASLC and IMIG have since their introduction in 1994 not been changed or thoroughly investigated and in the last years, a lot of questions have arisen regarding its clinical applicability (12). Furthermore, the N categories used for staging in MPM were adopted from the staging system of the Mountain/Dressler-American Thoracic Society (MD-ATS) and Naruke classification systems which were used for lung cancer staging (7,18,19). Subsequent research demonstrated that there is a difference in patterns of lymphatic drainage between lung cancer and MPM due to the fact that MPM predominantly involves the parietal pleura (20). However, substantial evidence supporting the applicability of these N categories for MPM is lacking.

In addition, no significant difference in survival could be found between pN1 and pN2 (seventh edition), thus supporting the fact that both should be grouped as stage III disease. However, a shift was proposed with regards to the anatomic locations of the lymph nodes and their corresponding categories. In the new, eighth edition of the staging system, intrapleural (previous N1) and extrapleural (previous N2) lymph nodes are grouped into one category (N1) and previous N3 nodes shifted into N2 category (Table 2) (7).

The M component of the TNM classification describes the presence of distant metastases of a certain solid tumor. The M descriptors as proposed in 1994 by IMIG were based on the same principles used in all other solid tumors. This means that M0 denotes no evidence of metastases and that M1 designates the presence of distant metastatic disease outside of the ipsilateral hemithorax (Table 3). In the recent IASLC staging project, data on patients with and without metastatic disease were analysed. Median overall survival in the M1 group was 9.7 months. In the previous staging systems, T4- or N3M0 were grouped in stage IV disease. However, the median overall survival calculated for these patients in the new IASLC database was 13.4 months, which was a significant difference. For this reason the authors have proposed to only include M1 in stage IV disease (Table 4) (8).

The eighth edition of the TNM classification has introduced some key changes in the different components of the staging system for MPM. For the T-component, the most important revision is the collapse of the previous stages T1a and T1b into one combined category T1. This means that there is no longer any distinction between tumors invading both the parietal and visceral pleura and tumors that are restricted to only the parietal pleura. This differentiation had already proven to be very difficult to accomplish in a clinical setting. In addition, statistical analysis of overall survival in patients with pathologically staged T1a and T1b MPM did not result in a significant difference. This means that there is little relevance regarding the prognosis by making a distinction between tumors invading the parietal and visceral pleura and tumors invading only the parietal pleura (6).

Another concept that has been researched during the analysis of the IASLC database is whether tumor bulk has any effect on the prognosis of patients with MPM. Measurements of pleural thickness in three axial planes were performed on the patients included in the database. The data was analysed and the results showed that there is a potential cutpoint at approximately 5 mm at which overall survival significantly changes if tumors exceed this thickness. However, interobserver variability is an important factor to take into account with these results and more research is necessary regarding this topic to further improve the staging accuracy of the T component (6).

For the N component, a number of important revisions were introduced in the eighth TNM classification of MPM. The previous editions of the TNM classification were largely based on data of nodal metastases in lung cancer even though there is evidence that the lymphatic drainage pattern of MPM is different. Analysis of the IASLC database revealed a number of interesting results with regards to the N components. The effect of single-station and multiple-station node involvement was researched and results proved that there is no significant difference in overall survival between these two groups. Furthermore, the concept of ‘skip metastases’, a situation in which N2-nodes are affected without N1-node involvement, was investigated as well. Overall survival was better in patients with N2 disease than patients with both N1 and N2 involvement. Similar results regarding survival have been obtained in studies of lung cancer patients with skip metastases (7).

As for the N descriptors, survival analysis did not yield any difference between pN1 and pN2 patients (seventh edition). This means that both can indeed be considered stage III disease as was previously assumed as well. With regards to the anatomical differentiation within the N categories, a redefinition was proposed after survival analysis. In the eighth TNM classification, only two N categories (N1 and N2) remain due to the fact that intrapleural and extrapleural nodes are now grouped into category N1. Furthermore, the previous anatomical descriptors for N3 disease are shifted and defined as N2 disease. In light of the results regarding the N descriptors, it seems that for MPM, survival is more affected by the number of nodes involved than by the specific anatomical locations of nodal disease (7).

In conclusion, a number of major revisions have been made for the eighth TNM classification for MPM. This project set up by the IASLC was the first large-scale analysis of an international database of patients diagnosed with MPM. Not only has it resulted in a number of new descriptors for categories T1, N1 and N2, it has also paved the way for a more clinically useful tool for staging patients with MPM. Furthermore, this extensive database analysis has introduced new research opportunities as well. For example, the concept of using tumor bulk as an additional prognostic instrument is a notion that is promising and certainly needs to be investigated (23,24). Some methodologies using computed tomography (CT) or positron emission tomography (PET) have been used for this purpose, however, more refined and internationally standardized measuring methods are necessary before tumor measurement can be included in the T component (24-27). As for the N and M components, it is essential that physicians continue to document nodal and distant metastatic involvement in their patients and gather this data for future research into refining the TNM classification.