In 1995, the Lung Cancer Study Group (LCSG) reported the only randomized trial that compared lobectomy to sublobar resection for the treatment of stage IA non-small cell lung cancer (NSCLC) (1,2). They found an increased risk for locoregional recurrence, a reduced 5-year survival rate, and no statistical evidence for the preservation of pulmonary function, and thereby disproved the speculation that sublobar resection had an outcome that was comparable to that of lobectomy, and reinforced the need for lobectomy in early-stage patients. Thus, sublobar resection was considered to be a “compromise” operation for high-risk patients who were not candidates for lobectomy because of advanced age, severely impaired pulmonary function, or other comorbidity (3-7).

Although lobectomy remains the standard of care for patients with stage IA NSCLC, recent advances in clinical imaging/staging modalities and the increased identification of smaller tumors by computed tomography (CT) screening have led to a resurgence of interest in sublobar resection for these tumors (8-13). Several recent studies have demonstrated comparable recurrence and survival rates for lobectomy and sublobar resection, even in good-risk patients with small stage I lung cancer (14-18). In addition, due to improvements in CT resolution, a ground-glass opacity (GGO) appearance on thin-section CT (TSCT) has been reported to be associated with a favorable histology such as non- or minimally-invasive adenocarcinoma in lung cancer (19-21). These GGO lesions are also likely to be amenable to sublobar resection.

In the early half of the 20th century, pneumonectomy was considered the only appropriate treatment for primary lung cancer. However, due to the unacceptably high mortality rate associated with pneumonectomy at that time, lobectomy evolved as the treatment of choice for resectable lung cancers. As a further extension of the anatomic approach to lung resection, thoracic surgeons began to explore the use of segmentectomy for early-stage lung cancer in high-risk patients (22-26). Subsequently, many studies reported that segmentectomy was useful as a compromise operation in selected, high-risk patients (3,27,28), since Jensik and colleagues first described its use for lung cancer resection in 1973 (22). Several of these studies advocated sublobar resection (wedge resection or segmentectomy) as an appropriate treatment for patients with early-stage lung cancer (3,27).

Due to speculation about the prospect of sublobar resection for early-stage NSCLC, the Lung Cancer Study Group (LCSG) conducted a prospective, randomized trial that compared lobectomy to sublobar resection for the treatment of clinical T1N0 NSCLC, and the results were published in 1995 (1). This trial demonstrated a 3-fold increase in local recurrence and a decrease in overall survival after sublobar resection. Consequently, the need for formal lobectomy in early-stage NSCLC was reinforced. Since this publication, many studies have retrospectively supported these results; i.e., lobectomy offers an overall and disease-free survival advantage (Table 1) (1,15,29-43). 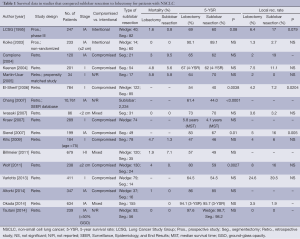 However, the 1995 LCSG study (1) received several major criticisms: (I) a high percentage of patients in the sublobar group underwent wedge resection other than anatomic segmentectomy; (II) routine chest CT examination was not required either preoperatively or for postoperative surveillance; (III) the difference in the prognosis between sublobar and lobar resections was relatively small; (IV) the analysis regarding the preservation of postoperative pulmonary function was inadequate between sublobar and lobar resections, and so on (16,44). In addition, recent advances in imaging and staging modalities and the detection of smaller tumors by TSCT scan have rekindled interest in sublobar resection for early-stage NSCLC. Thus, single-institutional retrospective investigations have demonstrated that sublobar resection is equivalent to lobectomy in patients with early-stage NSCLC and especially for smaller tumors (2 cm or less in diameter) (14,15,45,46). Currently, two prospective, randomized, multi-institutional phase III trials are being conducted by the Cancer and Leukemia Group B (CALGB 140503) and the Japan Clinical Oncology Group (JCOG 0802) (47). Additionally, according to the correlation between TSCT findings and the pathology of lung cancer, lung nodules with a GGO appearance on TSCT have been considered to be “early” lung adenocarcinoma (6,48). Whether or not sublobar resection constitutes adequate treatment for small peripheral cancer in general or for tumors in which the preoperative radiographic features suggest an “early” adenocarcinoma is still being investigated.

It is well known that tumor size is a recognized prognostic variable in NSCLC (49). Over the past decade, many studies have demonstrated improved survival and local control for patients with T1N0 tumors of 2 cm or smaller compared with larger tumors (11,30,50), although the LCSG trial (1) showed no survival advantage based on tumor size. Data from the recent lung cancer staging project headed by the International Association for the Study of Lung Cancer (IASLC) also found an improvement in survival for stage IA tumors less than 2 cm in diameter compared with those 2 to 3 cm in size and led to the reclassification of T1 tumors in the revised staging system (51,52). In this revision, tumors that measure 2 cm or less are considered to be T1a and those of 2 to 3 cm are T1b (52). The appropriateness of sublobar resection for small lung tumors, especially those 2 cm or less in size, has recently been addressed by many researchers. Table 2 summarizes the results of sublobar resection for NSCLC ≤2 cm (14-17,34,36,39,45,53-56). There is a growing body of evidence that sublobar resection may achieve oncological outcomes similar to those with lobectomy in this setting of smaller tumors. Patients with NSCLC of 2 cm or smaller may represent a population in whom sublobar resection should be considered.

The most common operative approaches for sublobar resection are wedge resection and segmentectomy. Wedge resection consists of the removal of a lung tumor with a surrounding margin of normal lung tissue, and is not an anatomical resection. On the other hand, segmentectomy is an anatomical resection that usually includes one or more pulmonary parenchymal segments with the dissection of intraparenchymal and hilar lymph nodes. Segmentectomy theoretically has the advantages of a wider resection, reduced technical limitations for achieving adequate margins (57), and the more extensive resection of draining lymphatics including intersegmental planes that are commonly considered to be a source of residual cancer cells (58). Many reports have suggested that nonanatomic wedge resection is inferior to anatomic segmentectomy as an oncologic approach (9,59). Actually, these reports found a significant increase in local recurrence and a decrease in survival after wedge resection compared with segmentectomy for especially stage I NSCLC (Table 3) (50,60-63). The superiority of segmentectomy with regard to the parenchymal margin has been documented in prior studies (57,61). For example, a study from the University of Pittsburgh retrospectively reviewed 81 patients who were treated with sublobar resection. Among the patients with wedge resection, only 39% had a margin greater than 1 cm, compared with 73% of those with segmentectomy (61). Consequently, the incidence of local recurrence was significantly higher in the wedge resection group. A prospective study by Kent et al. reached a similar result that wedge resection had a significantly smaller surgical margin than segmentectomy for non-small lung cancer (57). The inadequate surgical margins in wedge resection would result in a higher incidence of local recurrence (64). Sawabata et al. (65) and Shuchert et al. (54) identified a margin distance of greater than 2 cm or greater than the maximal tumor diameter as favorable indicators of decreased local recurrence after lung resection.

With respect to radiologic findings, based on the advent of high-resolution CT or TSCT, the radiology-pathology correlation has been studied (19,21,66), and the radiologic appearance of the various histologic subtypes in lung cancer, especially adenocarcinoma, has been described in detail (67). It has been shown that the lesions with GGO are more likely to be “early” adenocarcinomas such as adenocarcinoma in situ (AIS), or minimally invasive adenocarcinoma (MIA). Recent studies demonstrated that patients with GGO-dominant lung adenocarcinoma (consolidation/tumor ratio ≤0.5 on TSCT scan; Figure 1) of clinical stage I have an excellent prognosis (19,68). These tumors might be curatively treated with sublobar resection such as wedge resection or segmentectomy. 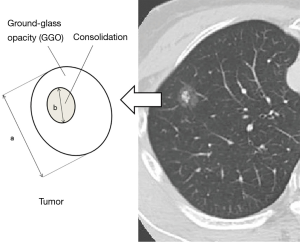 Lobectomy has been the standard of care for early-stage NSCLC since the 1995 report from the LCSG (1). Many studies have retrospectively supported this result, and have indicated that lobectomy carries an overall and disease-free survival advantage when compared to sublobar resection (32,33,36,69). Consequently, sublobar resection has typically been used for high-risk, but still operable, patients with lung cancer. However, recent improvements in the detection of small peripheral tumors and GGOs associated with a favorable histology have led to the increased use of sublobar resection in many centers to include patients with an adequate physiologic reserve.

GGO is defined as a hazy increased attenuation with the preservation of bronchial and vascular margins on TSCT (70). It has been proposed that lung cancer with dominant GGO (consolidation/tumor ratio 0.5 or less) within the lesion is more likely to be an early form of adenocarcinoma such as AIS or MIA (19,21). In particular, some GGOs are accompanied by a solid part (consolidation), and it has been demonstrated that a consolidation represents the portion of invasive growth, i.e., the consolidation/tumor ratio is thought to predict pathologic early adenocarcinoma (21). On the basis of these observations, the Japan Clinical Oncology Group (JCOG) 0201 study (48), a multi-institutional prospective study, was planned to establish radiologic criteria for predicting pathologic early (noninvasive) adenocarcinoma. Based on the results of this study, radiologic noninvasive lung adenocarcinoma could be defined as an adenocarcinoma ≤2.0 cm (cT1a) with a consolidation/tumor (C/T) ratio of 0.25 or less. Subsequently, Asamura and colleagues (68) reevaluated the radiology-pathology correlation in the JCOG 0201 study in terms of the prognosis. The radiologic criteria of a C/T ratio of 0.5 or less in cT1a-b (≤3.0 cm) as well as 0.25 or less in cT1a (≤2.0 cm) could be used to define a homogeneous group of patients with an excellent prognosis after surgery. These criteria can be used to select patients with early lung adenocarcinoma in whom a sublobar resection such as wedge resection or segmentectomy would be safely indicated. Clinical phase II trials to determine the appropriateness of intentional sublobar resection for “early” adenocarcinoma with these radiologic criteria have been conducted (JCOG 0804 and JCOG 1211).

On the other hand, for radiologic invasive lung cancer (cT1aN0M0) with a tumor diameter of 2.0 cm or less and a C/T ratio greater than 0.5, a prospective, randomized phase III study (JCOG0802/WJOG4607L) that compares lobectomy and segmentectomy in a noninferiority setting is ongoing (47). The primary and main secondary end-points are overall survival and postoperative pulmonary function, relapse-free survival, and proportion of local recurrence. This study began in August 2009 in Japan and a total of 1,100 patients will be accrued. Intraoperatively, the distance from the surgical resected margin to the tumor edge and lymph node must be evaluated. When lymph node metastasis is present or the resected margin is not cancer-free, the surgical procedure must be converted to a lobectomy. All randomized patients will be followed for at least five years. In North America, a similar trial entitled CALGB 140503 is also underway, in which the prognosis and preservation of pulmonary function are being compared in lobectomy and sublobar resection (segmentectomy or wedge resection) in a noninferiority study setting.

The number of patients who present with small tumors continues to increase due to the prevalence of CT screening. This should lead to a notable increase in the detection of tumors smaller than those included in the LCSG trial (1), which was conducted in the 1980s and based on the detection of lung cancer by plain chest radiography. Additionally, a recent report from the National Lung Screening trial demonstrated that CT screening for lung cancer reduced relative lung cancer mortality compared with screening by chest radiography (75). Sublobar resection will be expected to play an important role as a primary treatment option for patients with small stage IA NSCLC, especially if 2 cm or less in size, who can tolerate a lobectomy. However, care should be taken in promoting widespread indications for intentional segmentectomy in good-risk patients with a small tumor until the results of ongoing prospective, randomized clinical trials, such as JCOG0802/WJOG4607L and CALGB140503, are available (47). If these trials demonstrate that lobectomy and sublobar resection have similar curative effects and that sublobar resection offers better pulmonary functional preservation, sublobar resection should take the place of a lobectomy as the standard of care for patients with early-stage NSCLC.