Recent progress in the molecular understanding of lung cancer revealed that lung cancer is very heterogeneous in terms of driver oncogenes and hence the response to different drugs. The incidence of molecular alteration of a given driver oncogene is dependent on various epidemiologic factors, such as ethnicity, sex, and age of the patient. For example, mutation of the epidermal growth factor receptor (EGFR) gene is frequently observed in patients who are female, non-smoking and with East Asian ethnicity (1). However, translocation of the anaplastic lymphoma kinase (ALK) gene is common in young patients with non-smoking history, with no apparent ethnic differences (2). In this review, the molecular epidemiology of lung cancer is discussed with special reference to ethnic differences of EGFR mutations in lung cancer.

Lung cancer mortality and smoking rate ranking are not correlated

Although tobacco is well known as a major cause of lung cancer, the international ranking of the percentage of population aged 15 years or older who smoke daily by country (3) does not correlate with ranking of lung cancer mortality (4), according to the Organization for Economic Cooperation and Development (OECD) data as shown in Table 1. For example, the United States has the 6th lowest smoking rate (at 14.8%), yet the age-standardized rate of lung cancer mortality per 100,000 people is 82.6, which is the 4th highest. Conversely, in Chile, the smoking rate is high (29.8%), but lung cancer mortality is low (30.3) compared with other countries. One can speculate that a great deal of heterogeneity exists related to ethnic/racial differences in terms of lung cancer susceptibility related to smoking, e.g., in the United States, Iceland, and United Kingdom, this susceptibility appears to be high, while it is low in Chile, Japan, France, and Korea. 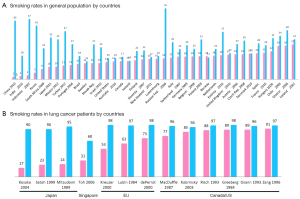 Higher susceptibility to lung cancer in Caucasians than in East Asians in smokers, but opposite relationship in never-smokers

In an analysis of 13 cohorts and 22 cancer registry studies, the lung cancer mortality rates of current smokers in US males, Asian (Korean) males, US females and Asian females were 302.7, 120.8, 142.7 and 36.3, respectively (Table 2) (9). Thus, males are more susceptible to tobacco-related lung cancer, as are US people compared with East Asians. However, gender difference of susceptibility to lung cancer risk has been controversial. Several studies indicated higher odds ratios in women than in men. For example, Risch et al. reported that the odds ratio of lung cancer for individuals with a 40 pack/year smoking rate relative to never smokers was 27.9 in women compared with 9.6 in men (10). A similar higher susceptibility among women was reported by other groups (11,12). The reason for this discrepancy may be attributed to several factors. Exposure to environmental tobacco smoke may be different between men and women. The fact that women with lung cancer tend to have better prognosis would cause differences in the incidence and mortality data. In contrast, lung cancer mortality in Caucasian never-smokers is lower than that in the Asian population, both in males and females.

The contribution of smoking status to the development of lung cancer is dependent on histologic types. For small cell or squamous cell carcinomas, the odds ratio (OR) for smoking in male/female patients are 21.4/12.1 and 18.1/9/7, respectively (13). In line with these data, it is rare to see small cell or squamous cell carcinomas in never-smokers. In contrast, the OR for adenocarcinomas is 1.9 for male and 1.3 for female (13). In other words, the contribution of smoking (at least direct smoking) to adenocarcinoma of the lung is lower, especially in females.

Many studies have identified genetic susceptibility to lung cancer using GWAS. According to a recent comprehensive review article, 20 GWAS in lung cancer compared with controls identified 5p15 (TERT-CLPTMIL) and 15q25 (CHRNA3) as lung cancer susceptibility loci 11 and 7 times, respectively, in mainly Caucasian populations (14). Because characteristics of lung cancer, including EGFR mutation incidence or smoking habit in conduction with sex, are markedly different between Caucasians and East Asians as discussed earlier, it is of interest to evaluate whether these two loci are also associated with lung cancer susceptibility in the Asian population. Using 21 case-control studies for 11,645 lung cancer patients and 14,954 control subjects, 85% of which were Caucasians and 15% were Asians, similar associations between Caucasians and Asians were identified for the chromosome 5p15 region (15). ORs for rs2736100 (TERT) were 1.15 and 1.23 in Caucasians and Asians, respectively, and those for rs407210 (CLPTM1L) were 1.14 and 1.15 in Caucasians and Asians, respectively (15). Conversely, there were inconsistent results at 15q25 between Caucasians and Asians. ORs for rs16969968 (CHRNA3) were 1.26 per allele in Caucasians (P=2×10–26). However, the OR was 0.94 in Asians without statistical significance (P=0.67) (15). When Ito et al. considered the combined effect of 15q25 loci and smoking, they found that the OR for heavy smoking was 4.03 and 8.09 in patients without and with the risk allele of rs931794, respectively. Therefore, it appears that the 15q25 region modifies the effect of smoking on the risk of lung cancer in the Asian population, and its contribution to smoking-independent carcinogenesis is not significant.

EGFR is a receptor tyrosine kinase that is frequently activated in adenocarcinoma of the lung mainly by small in-frame deletions in exon 19 or a point mutation occurring at codon 858 that changes leucine to arginine (L858R) (1). EGFR mutation is more frequent in adenocarcinoma of the lung in patients with East Asian ethnicity without smoking history (1). Figure 2 illustrates the frequency of EGFR mutations in lung cancer according to ethnic or geographic backgrounds. EGFR mutations are clearly more frequent in East Asian countries, including Japan, Korea, Philippines, Taiwan, Thailand, Vietnam, and Hong Kong. These differences may be partly explained by marked differences in smoking rate by countries and by sex. However, when the incidence of EGFR mutations according to smoking dose in Japan is compared with the United States (Figure 3), there is still a big difference in the incidence of EGFR mutation. For example, the EGFR mutation rate is less than 10% in patients with a 50 pack/year history or higher in the United States and it is more than 20% in Japanese patients (1). This pattern of EGFR mutations contrasts with that of KRAS and TP53 mutations, in which heavier smokers have a higher incidence of gene mutation (5). 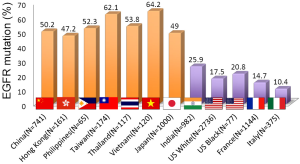 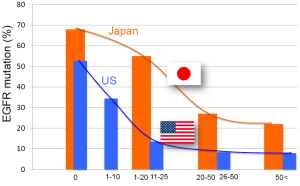 Figure 3 Incidence of EGFR mutations according to smoking dose in Japan (5) with that in US (21). EGFR, epidermal growth factor receptor. 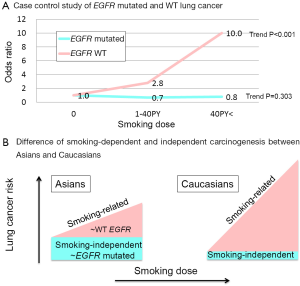 Search for factors associated with susceptibility to EGFR mutation

If EGFR mutation is not affected by smoking, then what determines the occurrence of the EGFR mutation? In our case-control study described above, sex was the sole risk factor for EGFR mutated lung cancer (OR for women relative to men, 2.19; CI, 1.41-3.39) and total fertile years showed a significant positive association with EGFR mutated NSCLC but not with EGFR WT lung cancer (22).

Other approaches to this issue include the exploration of the association between genetic polymorphisms and lung cancer with EGFR mutation. There are at least three polymorphisms within the EGFR gene. CA-SSR1 (CA simple sequence repeat 1) is located in intron 1 and the number of CA repeats ranges from 14 to 22 (23), with 16 being the most common number of repeats. East Asians tend to have longer repeats (23). Shorter repeats are associated with increased transcription and protein expression (24,25). Two single nucleotide polymorphisms (SNPs) in the promoter region with effects on increased transcription and expression of EGFR mRNA have also been identified. However, both of these SNPs (-216G/T, -191C/A) are less common in East Asians (26).

Nomura et al. examined the relationship between these three polymorphisms and EGFR mutation in samples including 556 resected non-small cell lung cancers, of which 336 are East Asians, and several normal tissue samples from different ethnicities (27). In line with the previous studies, the authors confirmed that these three polymorphisms associated with increased EGFR protein production were rare in East Asians (27). They also found that in East Asians, EGFR mutations occur on the shorter CA-SSR1 allele (suggestive of greater protein production) then allele specific amplification of the mutant allele follows. It is interesting to note three events leading to enhanced mutant protein production, such as increased transcription, mutation and amplification, target the same allele (27). However, it appears difficult to explain the higher frequency of EGFR mutations in East Asians by these findings.

In this review, I have discussed ethnic differences in lung cancer. Several factors appear to significantly modify the ethnic differences, i.e., sex, smoking habit, genetic polymorphism, driver gene mutations, and histologic subtypes. Our understanding of these relationships remains far from complete. In the future, GWAS may identify loci that are specifically related to EGFR-targeted carcinogenesis, leading to identification of carcinogens for EGFR mutations and effective prevention measures.

The author is grateful to Prof. Keitaro Matsuo of Kyushu University for helpful discussion and comments.

Disclosure: The author declares no conflict of interest.