Lung cancer accounts for 13% of new cancer cases diagnosed and is responsible for 19% of all cancer related deaths, partly explained by the fact that most lung cancer have advanced disease at the time of diagnosis (1).

New cancer drugs, such as tyrosine kinase inhibitors (TKI) targeting EGFR, ALK, ROS-1, RET and BRAF mutations, and checkpoint inhibitors have markedly improved the prognosis for a select group of non-small cell lung cancer (NSCLC) patients (2,3). Unfortunately, resistance towards targeted therapies usually emerges within one year (4,5). Therefore it becomes of great value to monitor the disease via minimally invasive techniques such as circulating tumor cells (CTC) derived from the bloodstream, as treatment may be adjusted at the earliest moment.

CTC have been proven to be an important and independent prognostic marker in several cancers, including lung cancer (6-14). The presence of CTC may be a reflection of the metastatic tumor burden or tumor invasiveness, explaining the strong association with overall survival (OS) (10,12,13). However, whether baseline CTC may predict tumor responses to therapy, irrespective of their prognostic value has not been investigated.

We hypothesized that CTC at baseline is an indicator for worse tumor response in advanced NSCLC patients treated with TKIs or chemotherapy. In addition, response rates to chemotherapy and targeted therapy were compared between patients with and without CTC to determine whether there are differences in treatment effectivity.

Consecutive patients with histologically proven bulky stage III or stage IV NSCLC, treated with chemotherapy or TKI, were eligible for inclusion in this exploratory prospective single center cohort study. The study was approved by the Medical Ethical Committee (NTR5540) and informed consent was obtained from all patients.

Enumeration and scoring of CTC

Before the start of treatment (baseline) 7.5 mL of whole blood was drawn into a CellSave blood collection tube (Menarini Silicon Biosystems, Huntingdon Valley PA, USA) and processed for CTC enumeration by the CellSearch® Circulating Tumor Cell Kit within 96 hours. CTC were determined according to previously published protocols (11,14). In short, cells were separated based on the expression of the epithelial cell adhesion molecule (EpCAM), by means of magnetic beads. Afterwards cells that did not express CD45 and were positive for the expression of EpCAM, cytokeratin (8/18/19) and DAPI were considered to be CTC.

Clinical assessments were done by the treating physician blinded for CTC scores. Molecular predictive testing was performed on pretreatment tissue biopsies using an in-house panel (version PGMv001) on the IonTorrent platform covering 11 clinically relevant genes (namely ALK, BRAF, EGFR, ERBB2, GNA11, GNAQ, KIT, KRAS, NRAS, PDGFRA and PIK3CA), and by means of FISH and immunohistochemistry on ALK, ROS1 and RET for adenocarcinoma patients, while amplification of FGFR1 was measured in squamous cell carcinoma patients (16,17). Molecular profiles of late-stage adenocarcinoma of the lung were retrieved from the database of the Laboratory of Molecular Pathology at the UMCG.

The response to treatment was measured after 6 weeks according to the Revised Response Evaluation Criteria In Solid Tumors version 1.1 (RECIST 1.1) denoting tumor response as progressive disease (PD), stable disease (SD), partial response (PR) and complete response (CR) (18). Patients with a PR or CR were classified as responders, while PD and SD were denoted as non-responders in the analyses.

Progression free survival (PFS) (time from start of treatment until disease progression occurred as defined by RECIST 1.1), and OS (time until death after start of treatment) were retrieved from the patients file. Follow up was completed in November 2018, at which time 9 patients were still alive, all having a follow up of at least 42 months.

Descriptive analyses were performed for all patients and by therapy group (TKI versus chemotherapy). Differences between treatment groups were tested by means of Fisher’s exact and Mann-Whitney U tests.

Multivariable models were used, with covariables selected in a backward conditional method. In short, all clinical parameters (age, gender, PS, smoking status, stage, mutations and therapy line) were included in the original model, after which a selection was made. Covariables with P>0.157 (based on the Akaike information criterion) were excluded, starting with the highest P value.

When CTC were significantly related to tumor response and survival, response would be incorporated as a covariable in the survival model to evaluate whether the relationship with response explained the difference in survival.

A sensitivity analysis (i.e., repeating the logistic regression and Cox regression analyses with a more homogenous population by using more stringent inclusion criteria) was performed including only adenocarcinoma patients. This was done to exclude disproportionate effects of other histological subtypes, considering that TKI treatment is mostly given to patients with adenocarcinoma.

If CTC were significantly associated with response or survival, the same model would be repeated, with the inclusion of an interaction term, composed of CTC presence and therapy group. This was done to evaluate whether the correlation of CTC with response or survival differed depending on the treatment that was given. If the interaction term was significant, the response rates or survival time for patients with and without CTC were different depending on the given therapy.

Outcomes are given as odds ratio (OR) for the logistic regressions (a value below 1 corresponds to a worse response rate), and hazard ratios (HR) for the Cox regression analyses (a value above 1 corresponds with a shorter survival). An effect is considered significant when P<0.05 in a two-sided test. All analyses are performed using SPSS version 23.

Eighty-six patients were included in this prospective study. Thirty-four received TKI. Baseline patient characteristics show that stage of disease, smoking, histology and DNA aberrations differed between the TKI and chemotherapy group (Table 1). Patients in the chemotherapy group received cisplatin (n=30, 58%) or carboplatin (N=22, 42%) combined with either pemetrexed, gemcitabine or paclitaxel. Patients receiving TKI were mostly treated with erlotinib for EGFR mutations (N=11, 32%) or dabrafenib for BRAF mutations (N=7, 21%). Specific information on TKI treatment and respective DNA aberrations is provided in Table S1. Tumor response and survival were not different between both groups (Table 2). Patients in the chemotherapy group mostly had immunotherapy on disease progression, while TKI patients did not. The presence of CTC and their number did not differ between treatment groups. No significant differences were identified between patients with and without CTC (Table S2). 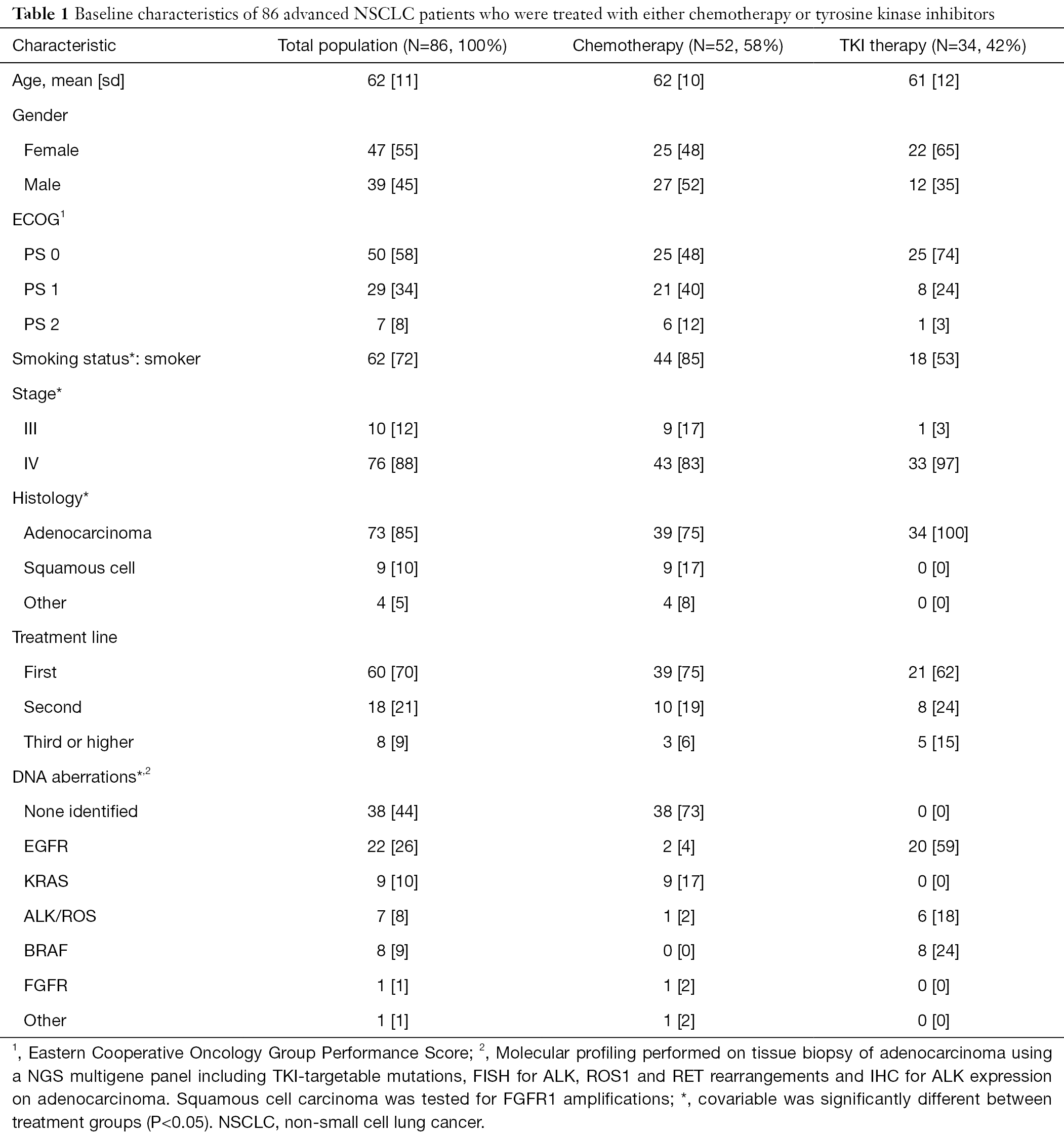 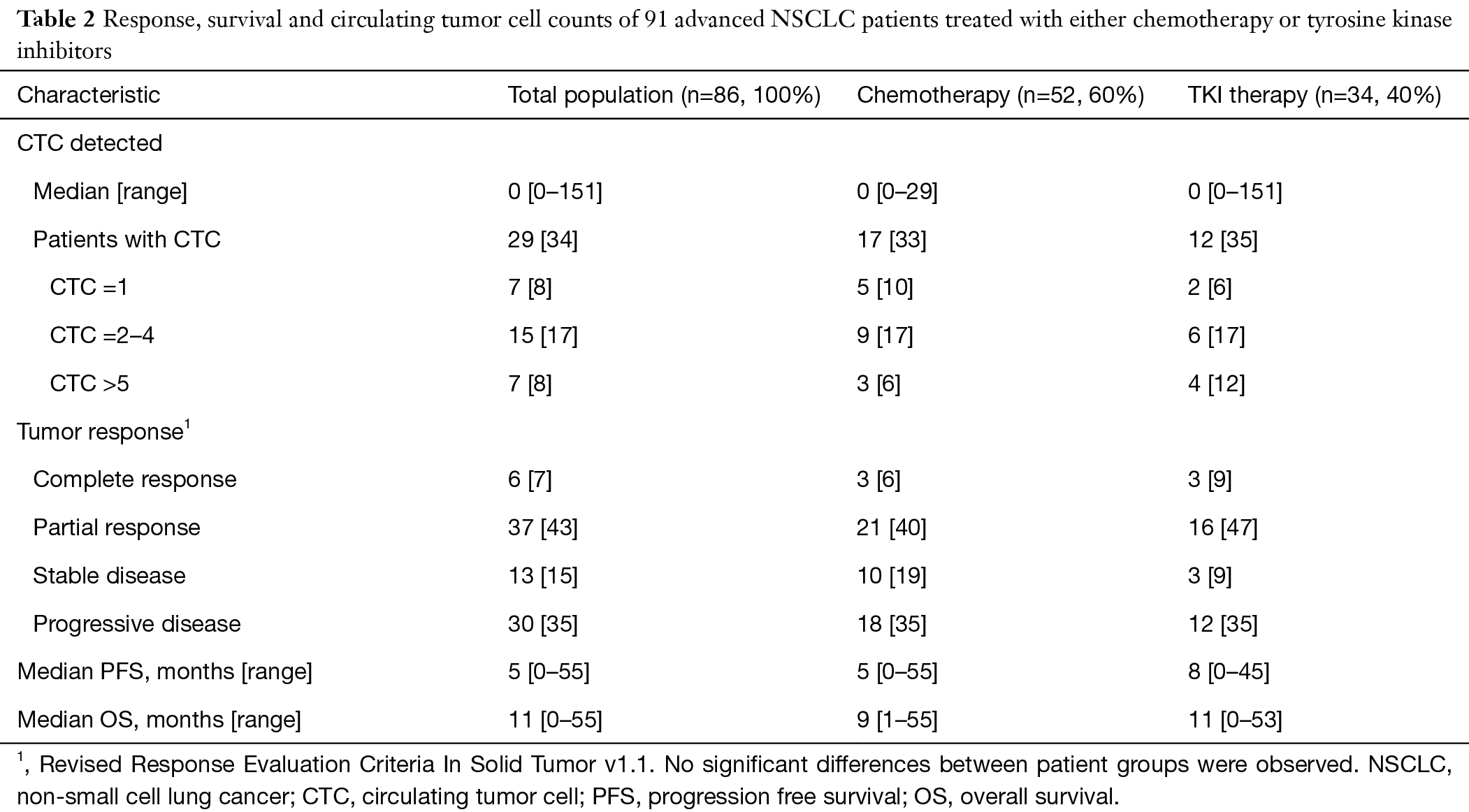 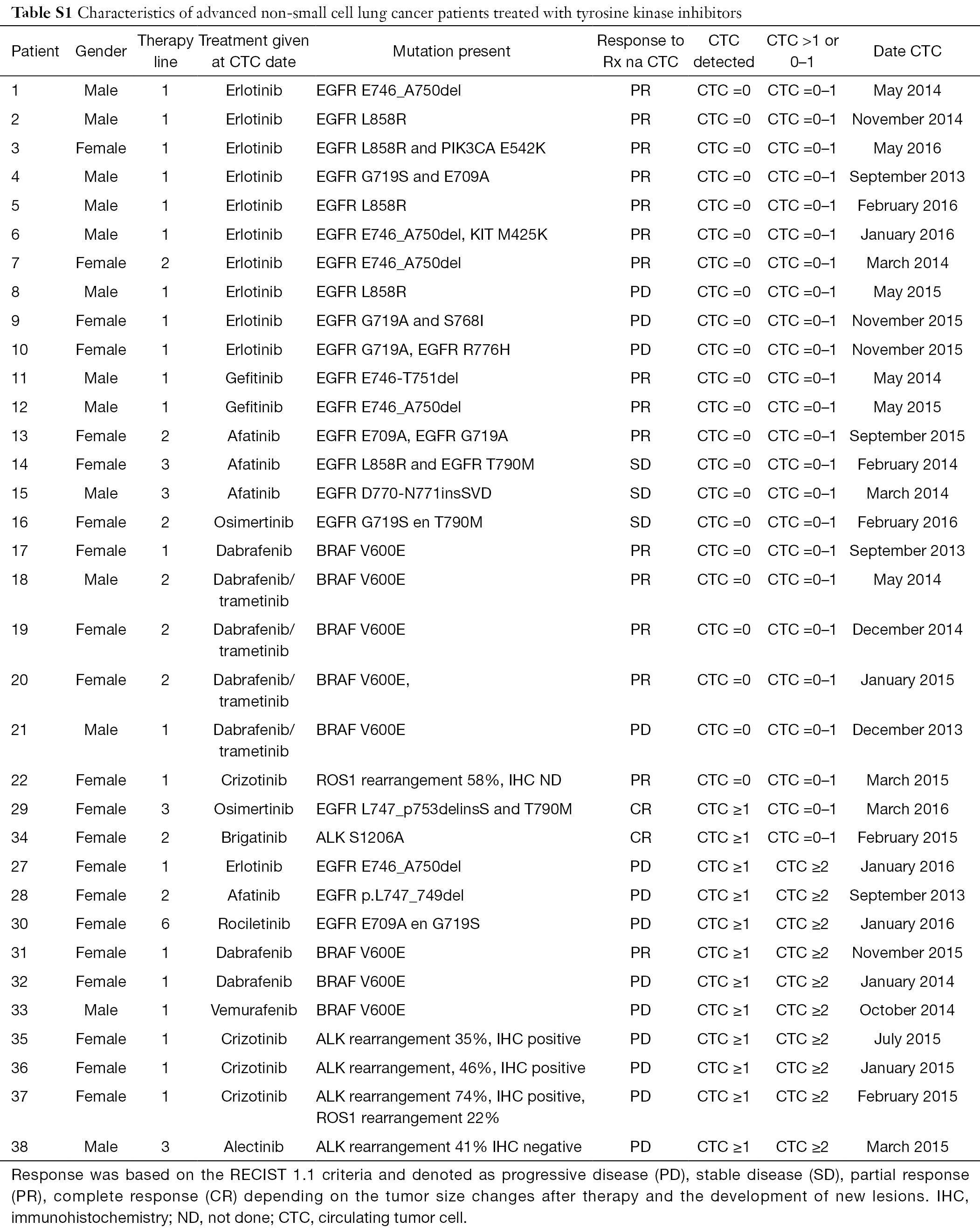 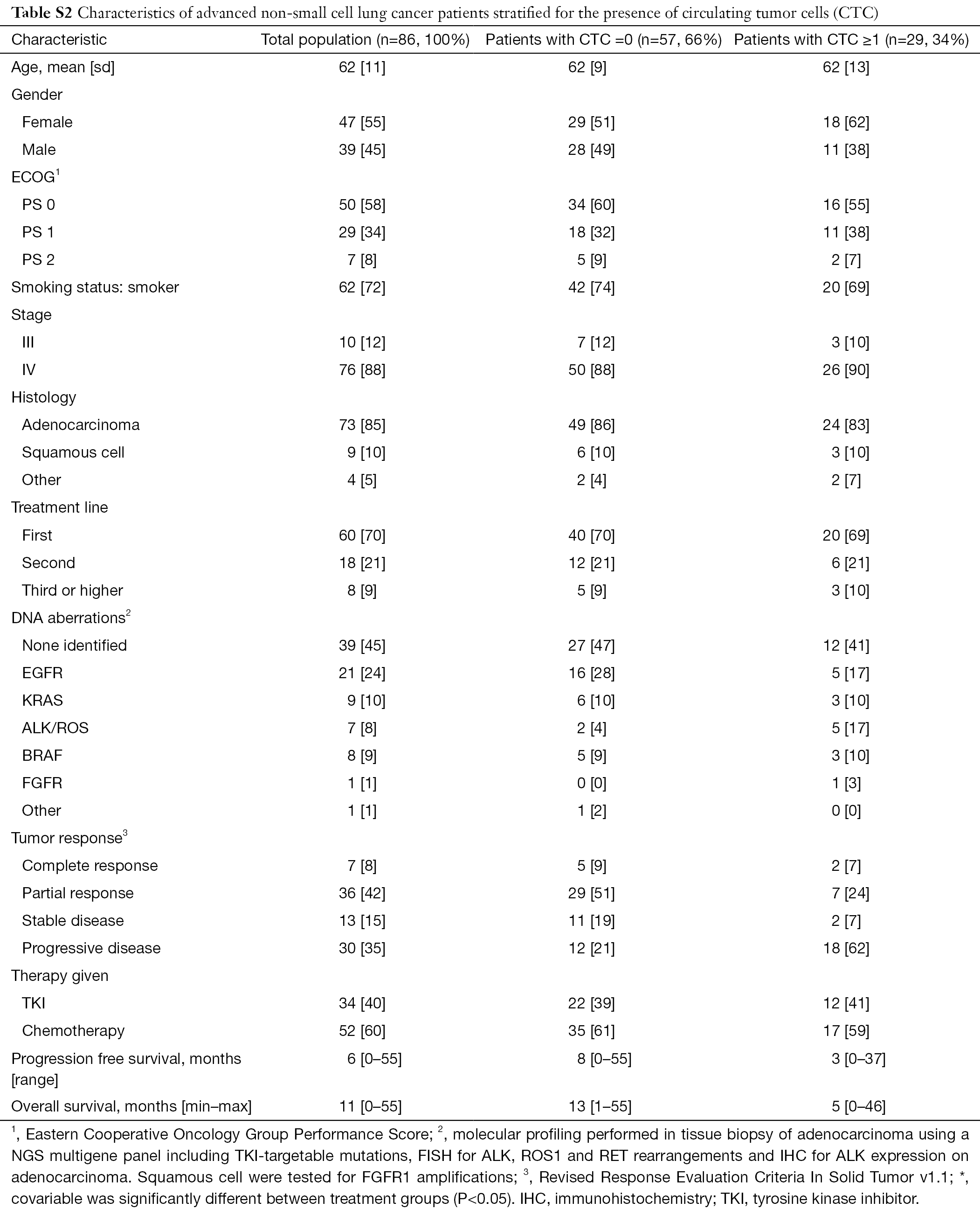 There were seven patients with ≥5 CTC/7.5 mL blood (4 received TKI and 3 chemotherapy). All of these patients had PD at 6 weeks and died within 3 months.

Tumor response rates at six weeks were significantly lower in patients who had CTC detected in 7.5 mL of blood (31% responding) compared to patients without CTC (61% responding, P=0.01). After adjustment for PS and smoking status, the presence of CTC remained significantly associated with worse tumor response [OR =0.22, 95% confidence interval (CI): 0.07–0.65, P<0.01]. The sensitivity analysis including only patients with adenocarcinoma showed a similar relation (OR =0.16, 95% CI: 0.05–0.6, P<0.01).

The interaction term between presence of CTC and treatment was not significant (TKI response: 25% with CTC versus 73% without CTC, chemotherapy response: 35% versus 51% respectively, interaction P=0.27. Figure 1). 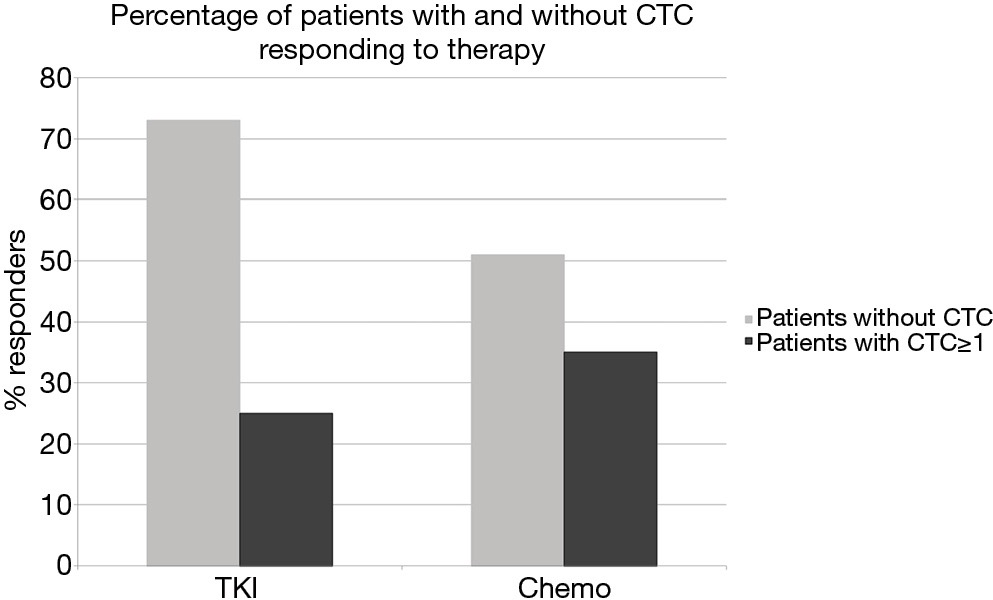 In this study we showed that the presence of CTC before therapy is a risk factor for worse tumor response rates and survival in advanced NSCLC, irrespective of treatment. The response rate to TKI treatment is severely lowered in patients with CTC.

CTC have shown to be prognostic for lung cancer previously (6-14). Additionally, an increase in CTC numbers during treatment is associated with worse response and shorter PFS and OS (7,19,20). However, this is the first study reporting that the presence of CTC at baseline in advanced NSCLC patients is associated with worse response to therapy, and that this is independent of the given therapy.

The lower response rate in those with CTC could be due to epithelial to mesenchymal transition (EMT) that tumor cells and CTC may undergo, inducing increased expression of genes related to resistance to chemotherapy, as seen in possible cancer stem cells (21,22). Other possibilities are that CTC indicate more tumor burden influencing the physical state of a patient, causing a decreased drug tolerability, and/or that CTC are associated with a more aggressive tumor, leading to less responsiveness to treatment and shorter survival (10,12,13).

Alternative liquid biopsies which can predict the response to targeted therapy have been investigated. Circulating tumor DNA (ctDNA), may be shed from the original tumor or its metastases and is another option besides CTC as a liquid biopsy (23-26). As TKI’s target aberrant proteins or receptors, their corresponding DNA mutations can be detected in the plasma, foregoing invasive biopsies.

While mutations can also be identified in CTC, ctDNA can be detected in a larger proportion of patients and outperforms mutation detection in CTC (26,27). Yet ctDNA has been shown to have no additional predictive value compared to mutations detected in the tumor biopsy like CTC in our study (28-30). Additionally, when enough CTCs are isolated functional testing can be performed. Moreover, one can measure the tumor heterogeneity and the potential propensity characteristics of the tumor.

Currently, CTC are detected in only 30–35% of patients with advanced NSCLC. However, they can be obtained in a larger proportion of patients in greater numbers when an increased blood volume obtained through leukapheresis is analyzed (31,32). In the apheresis product CTC are more concentrated, allowing easier detection and further functional analysis. Already, differences in the expression of programmed death ligand 1 (PD-L1) and epithelial cell adhesion molecule (EpCAM) have been identified on CTC, with different consequences for prognosis (11,15,33,34). But whether this can be used to improve the association of CTC with response is still unknown.

For our study, we used a real life patient cohort of 86 patients with advanced NSCLC. Despite the small number and heterogeneity, CTC were still significantly associated with lower response, even with a cut off value of CTC ≥1, indicating their profound influence on outcome.

While for other tumors a cut off value of ≥5 CTC is recommended, in NSCLC a lower cut off is used due to the low CTC counts identified (7). While cut off values for NSCLC differ between investigators, they are often 1 or 2 CTC in 7.5 mL of blood (8,9,11,15,20). We decided to use CTC ≥1 as a cut off based on previous studies and to maximize the amount of patients that were CTC positive (8,9).

Funding: This work was supported by the Cancer-ID consortium in which the authors participate. Cancer-ID has received support from the Innovative Medicines Initiative (IMI) Joint Undertaking under grant agreement (No. 115749). Its resources are composed of financial contribution from the European Union’s Seventh Framework Program (FP7/2007-2013) and EFPIA companies’ in-kind contribution. The MCBP department of the University of Twente received the CellSearch kits from Janssen Diagnostics as part of a collaborative research agreement.

Ethical Statement: The authors are accountable for all aspects of the work in ensuring that questions related to the accuracy or integrity of any part of the work are appropriately investigated and resolved. The study was approved by the Medical Ethical Committee (NTR5540) and informed consent was obtained from all patients.