Immunocytochemistry of cytology specimens for predictive biomarkers in lung cancer

Predictive biomarkers are markers of therapeutic efficacy, the results of which are essential for determining patient care. With a growing number of predictive biomarkers that have emerged in non-small cell lung carcinoma (NSCLC), there has been a paradigm shift in the management of these patients. Targeted therapies with tyrosine kinase inhibitors (TKIs) in patients with sensitizing mutations in EGFR or ALK and ROS1 rearranged tumors, and immune checkpoint inhibitor therapy in patients expressing PD-L1 are just some of the examples of how predictive biomarker testing has become an integral part of NSCLC standard of care (1).

Of the various predictive biomarker testing methods, immunohistochemistry (IHC) is common, cost-effective, and easily available in most laboratories, has a rapid turn-around time, can be performed on relatively fewer number of tumor cells and poses the least amount of technical challenges when compared to other molecular and cytogenetics methods (2,3). While most predictive IHC assays are validated primarily on formalin-fixed paraffin-embedded (FFPE) histologic tissue samples, a large fraction of NSCLC patients are diagnosed on cytology samples, resulting in an increasing demand for predictive biomarker testing on cytologic specimens.

Most laboratories follow the recommendations from the College of American Pathologists (CAP) guideline for IHC assay validation on FFPE tissue samples; however cytologic specimens pose a greater challenge for validation (4). This is in part due to the wide variety of cytologic specimen preparations that comprise multiple preanalytic variables including a variety of collection media, preservatives, fixatives, storage conditions, processing techniques, and stains among others (2). Therefore, implementing IHC assays that are standardized and validated on FFPE histologic tissue samples on these cytologic specimens require a thorough and rigorous validation process. While several professional organizations have issued recommendations for the use of cytologic specimens for ancillary testing in NSCLC samples (5,6), specific guidelines for assay validation for immunocytochemistry (ICC) on cytology samples (for instance number of samples, selection of markers etc.) are largely lacking and are typically at the discretion of the individual laboratory medical director.

A recent article from the International Association for the Study of Lung Cancer (IASLC) Pathology Committee states that “all cytologic preparations, including cell blocks, ethanol fixed, and air-dried slides” can be used for ICC (7). Of the various cytologic specimen preparations, cell blocks are the most widely used. This is in part due to the easy availability, the ease of getting multiple sections for a panel of markers, and the ease of validation as standardized protocols for FFPE histologic tissue can be easily implemented on cytology cell blocks for automated immunostainers (2). The wide acceptance of cell block sections for ICC uses the premise that all cell block protocols (irrespective of preparation protocol) use 10% neutral buffered formalin as the final fixation step prior to processing into an FFPE block. However, there is no standardized protocol for the type of collection media, prefixation, and processing technique and there is a wide variation amongst cytopathology laboratories. While the varied processing methodologies do not significantly impact diagnostic yield, several recent studies have highlighted issues with immunostaining of specific markers that demonstrate reduced antigenicity and false negative results mostly related to ethanol or methanol-based fixatives used prior to cell block preparation (8-11).

Non-cell block cytologic preparations including air-dried and alcohol fixed direct smears, cytospins and liquid based cytology (LBC) preparations pose an even greater challenge for ICC validation. Of these, immunostaining of ethanol-fixed smears or cytospins are used more frequently, with prior Papanicolau staining that can identify areas or cells of interest, or air-dried unfixed extra slides that can be used for ICC usually after some sort of post-fixation step involving formalin or acetone (12-14). While there are studies in the literature that suggest some fixatives can alter the antigenicity and results of ICC in cytologic samples, a report from the United Kingdom National External Quality Assessment Service (UK NEQAS) suggests that all non-formalin fixatives, with the exception of acetone, yield a quality of immunostaining comparable to that of formalin fixation alone (15).

Given the implications of biomarker reporting in NSCLC, where the results of ICC are used to guide patient care, it is critical that a rigorous protocol validation with possible optimization of existing FFPE protocols for histologic tissue, together with careful quality control (QC) measures, prior to any clinical implementation is required for all cytologic cell block and non-cell block specimens. Analytic validation of an ICC assay requires positive and negative control slides to be processed in the same way as the test samples (4). However, due to the difficulty of finding standardized control slides, most laboratories resort to using FFPE histologic sections as controls for ICC, a practice that is inadequate for non-FFPE cytologic specimen preparations (16). Commercially available cell lines with specific target antigen expression may be used as a positive control for ICC assay, but not all antigens are available as cell lines, in addition to posing a significant resource commitment. This underscores the need for adequate quality assurance measures with internal QC checks and participating in external QC programs as part of the continued QC metrics for ICC biomarker assays (2,15).

The current College of American Pathologist/ International Association for the Study of Lung Cancer/ Association for Molecular Pathology (CAP/IASLC/AMP) guidelines recommend the use of ALK IHC using D5F3 (Cell Signaling Technology, Danvers, MA) and 5A4 (Novocastra, Leica Biosystems; Newcastle Upon Tyne, UK) clones as an alternative to testing for ALK rearrangements using a fluorescence in situ hybridization (FISH) assay (17). The ALK D5F3 clone uses a Ventana automated immunoassay (Ventana ALK D5F3 CDx Assay, Ventana Medical Systems, Tucson, AZ) that has been approved by the United States Food and Drug Administration (FDA) as a companion diagnostic kit for the use of crizotinib in patients with ALK rearrangements (17,18).

Most cytology studies using ALK ICC have been performed using the D5F3 or 5A4 clones on cell block preparations and demonstrated 100% sensitivity with specificities ranging between 83% and 100% (19-24). Studies using non-cell block preparations including smears, cytospins and LBC preparations have shown slightly lower sensitivity (66–100%), suggesting that ICC on non-FFPE substrates may require some additional optimization (25-28). Table 1 summarizes some of the studies in the published literature that report ALK ICC in cytology specimens.

ROS1 IHC using the highly sensitive but relatively less specific D4D6 (Cell Signaling Technology)clone has been recommended by the CAP/IASLC/AMP as a screening only tool where any cases that are positive by the IHC assay need molecular or cytogenetic confirmation (17). Unlike ALK, ROS1 IHC using D4D6 has not been FDA approved to be used as a companion diagnostic in patients with ROS1 rearrangements. Relatively few studies in cytology using ROS1 D4D6 ICC have been published; immunostaining using cell blocks as well as non-cell block smear and cytospin preparations have demonstrated sensitivities of 88–100% and specificities of 92–98% (29,30) (Table 2). More recently, a Ventana ROS1 antibody (SP384) has been developed with high sensitivity and specificity; however, there is very limited data on cytology samples (31-33).

A number of PD-L1 IHC assays have been developed as separate predictive biomarker assays that are associated with separate checkpoint inhibitors in separate clinical trials, making the validation and implementation of PD-L1 IHC challenging. The Dako 22C3 pharmDx and Ventana SP263 assay have been FDA approved as companion diagnostic tests with specific tumor proportion scores (TPS) to determine eligibility for immune checkpoint inhibitors (2,3). Part of the challenge of evaluating and interpreting PD-L1 ICC in cytology is the fact that none of the clinical trials involving checkpoint inhibitors included cytologic specimens. In addition, PD-L1 expression is known to have spatial heterogeneity, making the assessment of PD-L1 TPS on cytology specimens challenging (34-37). Further issues involve evaluating PD-L1 clones such as SP143 that require evaluation of both tumor and immune cell components, which may be difficult to perform on a cytologic specimen that lacks architecture, especially in sites such as a lymph node with metastatic tumor (3,38).

Notwithstanding, several studies have analyzed the concordance of PD-L1 expression in comparison to histologic tissue samples, showing that PD-L1 can be reliably assessed on cytologic samples (39-43). Most published studies were performed using cytology cell block preparations; however a few studies have reported ICC on cytologic smears with good concordance with histologic specimens (41,44-46). One study also reported clinical response to check point inhibitor therapy in patients with high PD-L1 expression in cytology samples, providing clinical evidence of a predictive role of PD-L1 ICC in cytology samples (47).

ICC for other predictive markers

Other predictive markers that may have some use in the setting on NSCLC include EGFR mutation specific antibodies, L858R (43B2) and the 15 base pair E746-A750 deletion in exon 19 (6B6). Both these antibodies are highly specific (96–99%) and have been shown to be suitable on cytologic preparations including cell blocks, smears, cytospin and LBC preparations (48-52). However, since they only detect a subset of EGFR mutations, current guidelines do not recommend the use of EGFR mutation specific antibodies for selecting patients due to the low sensitivity (ranging from 47% to 92%) (17).

There is growing evidence on the usefulness of detecting MET alterations (MET exon 14 skipping mutations and MET amplifications) in NSCLC patients; however evaluating MET protein expression using IHC (clone SP44) does not seem to be provide an efficient screening method (3,58,59).

The versatility of specimen preparations in cytology provides a variety of options for the application of predictive ICC. Most ICC assays can be performed on very limited number of tumor cells and results are cost-effective (compared to other molecular/cytogenetic options) with rapid turn-around time. The main difficulty of implementing predictive ICC on cytology specimens is the need for optimization and additional validation to ensure rigorous QC which is frequently challenging due to the lack of standardized processing protocols for cytologic specimens. Therefore, cytology remains an underutilized resource for predictive ICC in NSCLC patients.

In addition, interpretation of predictive ICC on non-cell block preparations may sometimes pose difficulty. For example PD-L1 expression is defined as partial or complete membrane staining of tumors cells, and nuclear or cytoplasmic staining is considered non-specific. However, in non-cell block preparations with the three-dimensionality of cell clusters and overlapping intact cells, membranous staining may often appear as cytoplasmic staining (2) (Figure 1). Also, non-specific staining of background cells such as histiocytes and inflammatory cells can frequently lead to overestimation of PD-L1 TPS (2,44) (Figure 2). The absence of a corresponding section (as available in cell blocks) with a confirmatory immunostain such as TTF-1 that can help identify the tumor cells for accurate PD-L1 estimation, adds to the challenge of interpreting predictive ICC on non-cell block preparations. 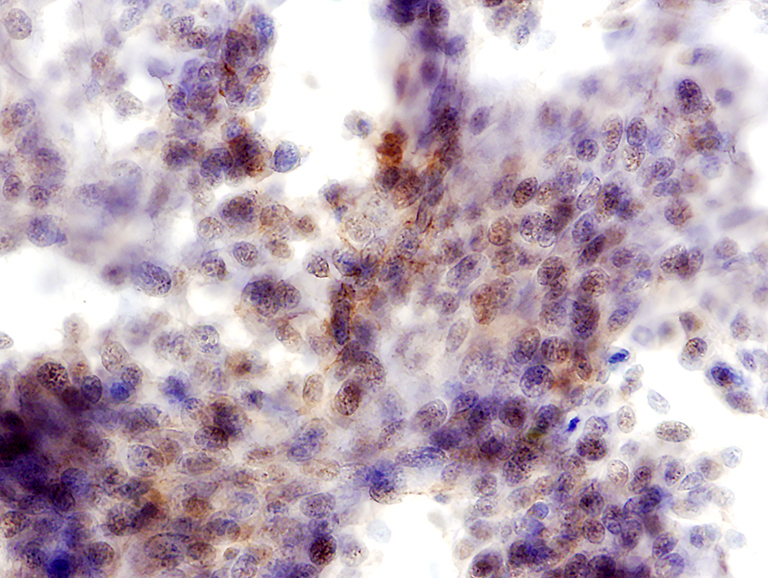 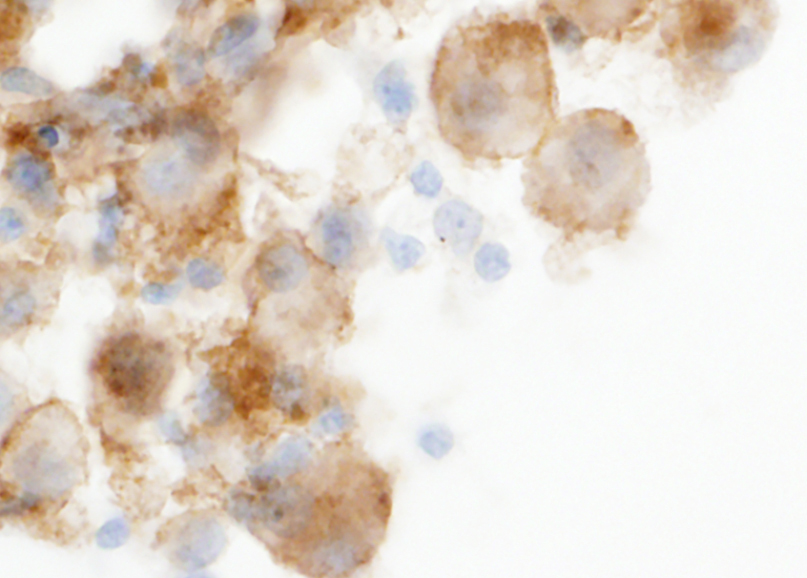 With the increasing number of predictive biomarkers available for treating NSCLC patients, the need to provide rapid, reliable, cost-effective results from NSCLC specimens is very important. IHC is a widely available and less technically challenging assay than molecular testing that can be performed effectively on most FFPE tissue. Translating these predictive biomarker assays into cytology specimens provide a few challenges. However, with proper optimization and rigorous validation, ICC can be performed on all cytologic specimens. Being able to implement predictive ICC assays in routine cytology practice can provide a rapid and cost-effective option for evaluating predictive biomarkers, especially in cases with limited tumor that precludes molecular testing.

Conflicts of Interest: The author has completed the ICMJE uniform disclosure form (available at http://dx.doi.org/10.21037/tlcr.2019.12.31). The series “Selected Highlights of the 2019 Pulmonary Pathology Society Biennial Meeting” was commissioned by the editorial office without any sponsorship or funding. The author has no conflicts of interest to declare.