Controversies and challenges in the histologic subtyping of lung adenocarcinoma

In the eight years since the International Association for the Study of Lung Cancer (IASLC)/American Thoracic Society (ATS)/European Respiratory Society (ERS) international multidisciplinary classification of lung adenocarcinoma was published, a considerable amount of data has been generated regarding its validity and applicability (1). This article explores those data and considers potential future modifications to the IASLC/ATS/ERS lung adenocarcinoma classification that will have prognostic impact. 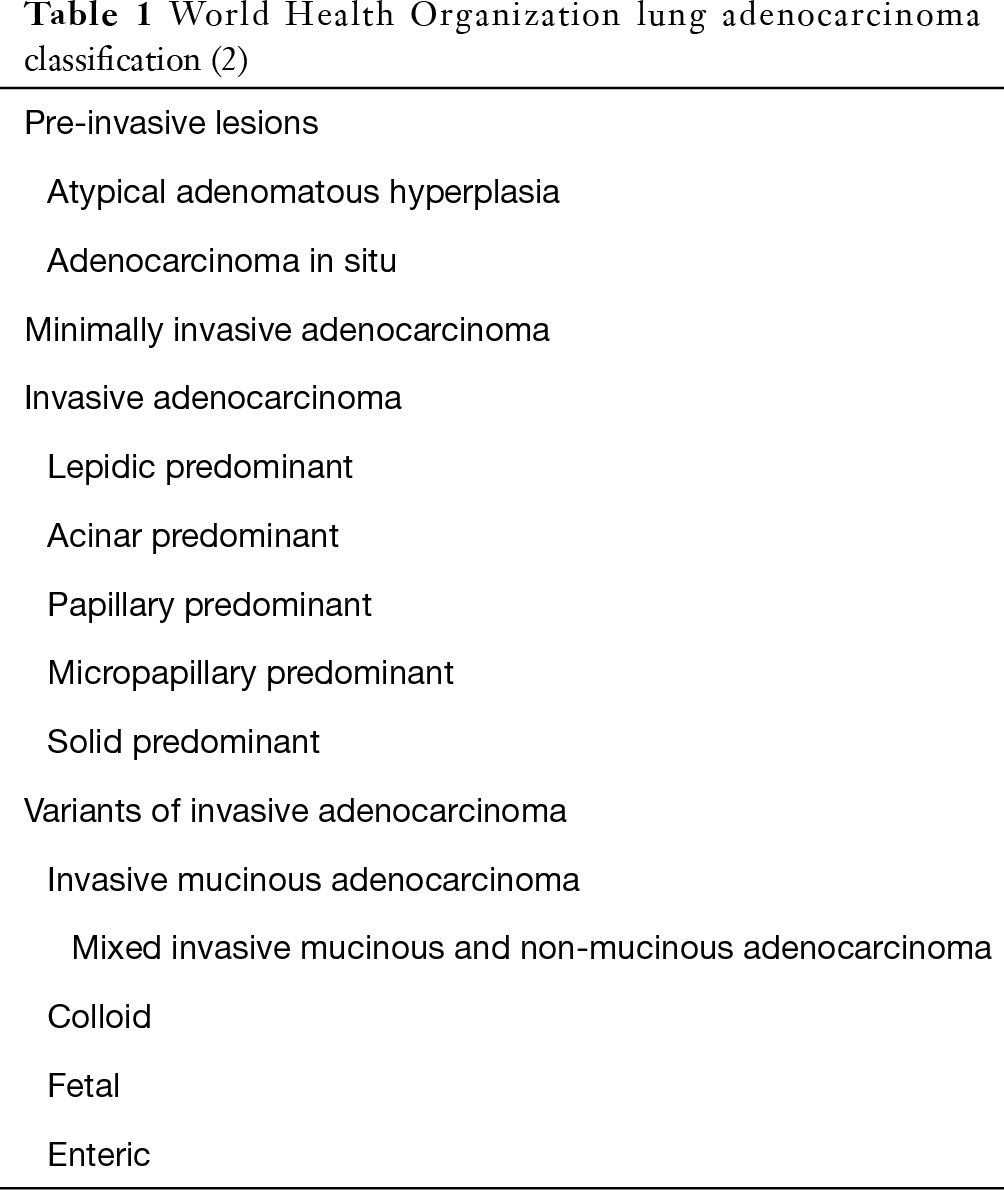 AIS and MIA are both diagnoses of exclusion, made challenging in part because the exclusionary criteria for each are slightly different (2). While both lesions are by definition 3 cm or less in size, AIS is characterized by pure lepidic growth, which is defined as growth of neoplastic cells along alveolar septa without architectural destruction. MIA is predominantly lepidic, but shows focal invasion measuring 5 mm or less. No stromal, vascular, or pleural invasion is allowed in AIS, whereas only the latter two of these criteria apply to MIA. AIS must not exhibit any papillary or micropapillary pattern or intraalveolar tumor cells, while the only other defining criterion for MIA is the absence of necrosis. Accurate assessment of these parameters demands that lesions in which the diagnosis of AIS or MIA is being considered be entirely histologically examined. Adding to this challenge is the relatively frequent occurrence of sclerosis/stromal collapse of the alveolar framework in AIS that can simulate invasion (Figure 1). Elastic stains may highlight breaks in the alveolar elastic framework in MIA, but interpretation of this sometime subtle finding can be difficult (Figure 2). 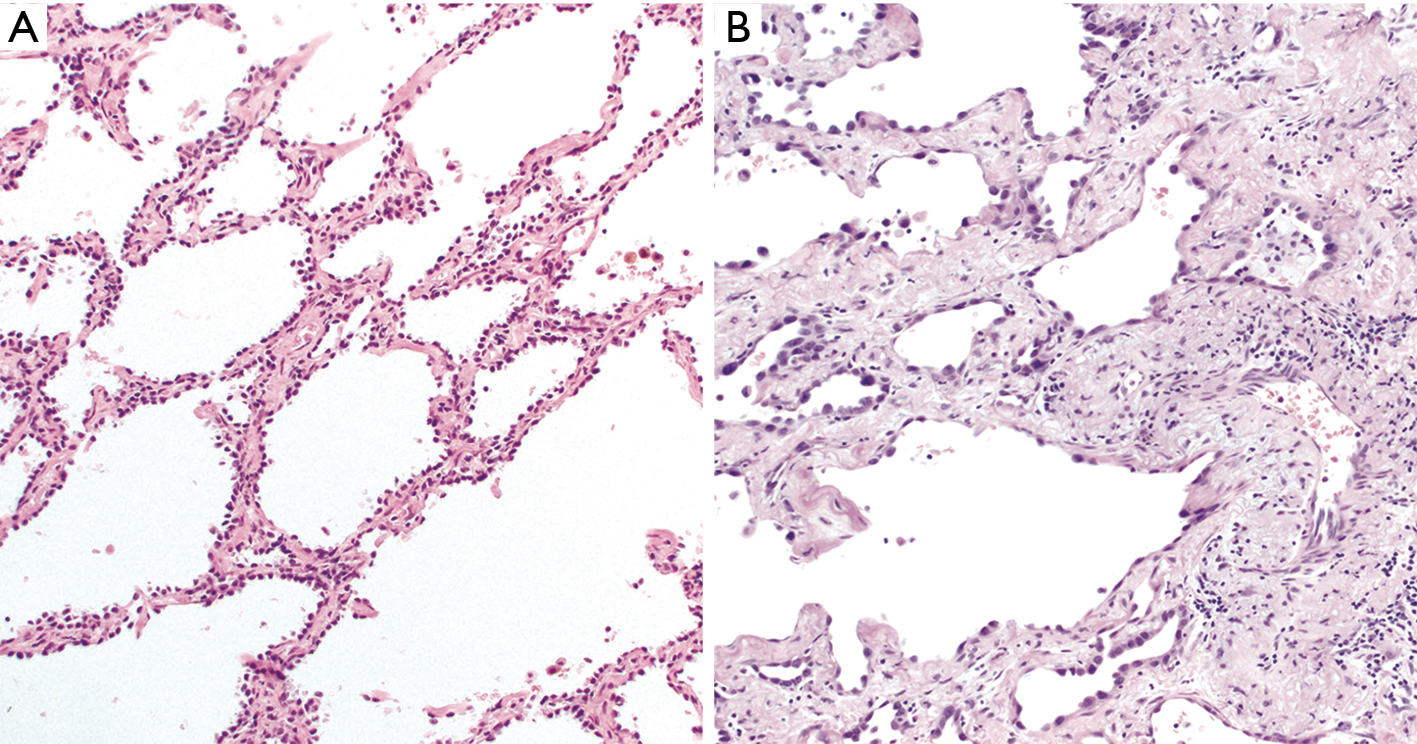 Figure 1 Pulmonary AIS, which is defined by pure lepidic growth of neoplastic pneumocytes along alveolar septa (A), may exhibit sclerosis/stromal collapse of the alveolar framework that can be mistaken for invasion (B) (HE stain, ×200). AIS, adenocarcinoma in situ. 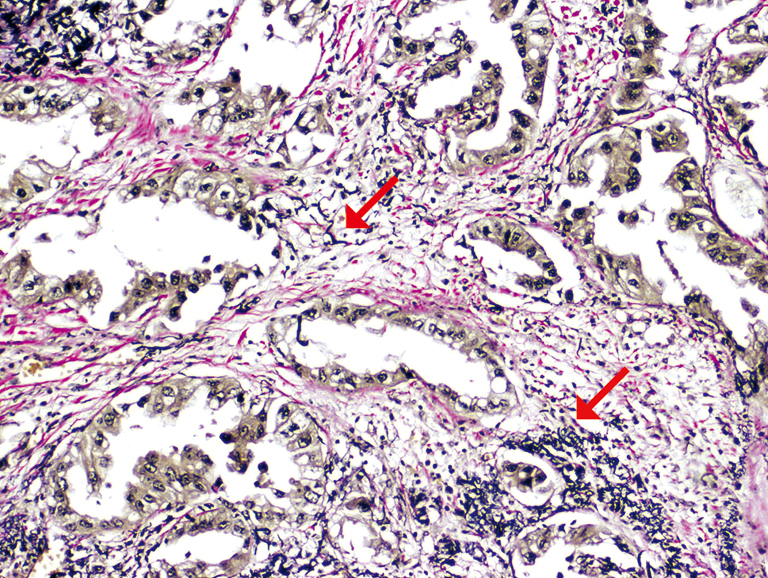 The data on interobserver variability in categorizing AIS from MIA are limited. In one study of 296 surgically resected lung adenocarcinomas reviewed by two pathologists, there was disagreement between AIS and MIA in six cases (2%) (4). Another study found moderate interobserver agreement in the distinction between “typical” cases of non-invasive and invasive lung adenocarcinoma (ĸ =0.55), but poor agreement (ĸ =0.08) for cases participating pathologists considered “problematic” (5). However, discriminating between AIS and MIA may not be clinically important, as multiple validation studies have shown 100% 5-year disease-free survival (DFS) in both tumor types when completely resected (3,6-9). This has led some to propose reassigning completely resected MIA to stage 0 instead of the current stage IA1 designation (9).

The reported 5-year DFS for lepidic-predominant lung adenocarcinoma (LPA) is in the range of 70–100% (10-13). A higher proportion of lepidic growth might be reasonably surmised to confer a better prognosis. Recent data have indeed borne this out. In one study, no recurrences were observed in resected lung adenocarcinomas with >50% lepidic growth pattern (12). Another study found that the 5-year observed survival rate of 67% for patients with tumors that are >80% lepidic was significantly better as compared to 56% for patients whose tumors exhibit a lower proportion of lepidic growth (13).

Figure 3 Lung adenocarcinomas in which complex acinar formations (B) or cribriform arrangements (C) predominate have a worse prognosis that tumors composed predominantly of simple acinar structures (A) (HE stain, ×400).

While papillary-predominant lung adenocarcinomas are generally considered intermediate prognosis tumors, not all studies have reached the same conclusion. In one study that reported a 38% 5-year DFS among papillary-predominant lung adenocarcinomas, papillary growth was strictly defined as a very clear-cut papillary architecture with mostly pleomorphic high-grade tumor cells (11). It would appear, however, that not all papillae are created equal with respect to clinical outcome. In a follow-up study, papillary lung adenocarcinomas were placed into three groups based on their architectural and cytologic characteristics: (I) “pseudolepidic” growth with small to medium-sized papillae and slight nuclear atypia, (II) moderate atypia and medium-sized papillae with papillary thyroid carcinoma-like growth, and (III) highly variable-sized papillae with marked atypia (17). Tumors exhibiting highly variable papillae with marked atypia had a significantly worse DFS of 49.9 months as compared to 67.1 months for tumors with “pseudolepidic” growth and slight atypia and 56.8 months for the group with moderate atypia and medium-sized papillae, suggesting that a single category of papillary-predominant lung adenocarcinoma may not be adequate for prognostication (Figure 4).

Figure 4 The degree of atypia and architectural complexity in papillary lung adenocarcinoma can vary considerably, ranging from slightly atypical cells and “pseudolepidic” papillae (A, ×200) to medium-sized papillary thyroid carcinoma-like papillae (B, ×400) to complex papillae with marked atypia (C, ×400) (HE stain). 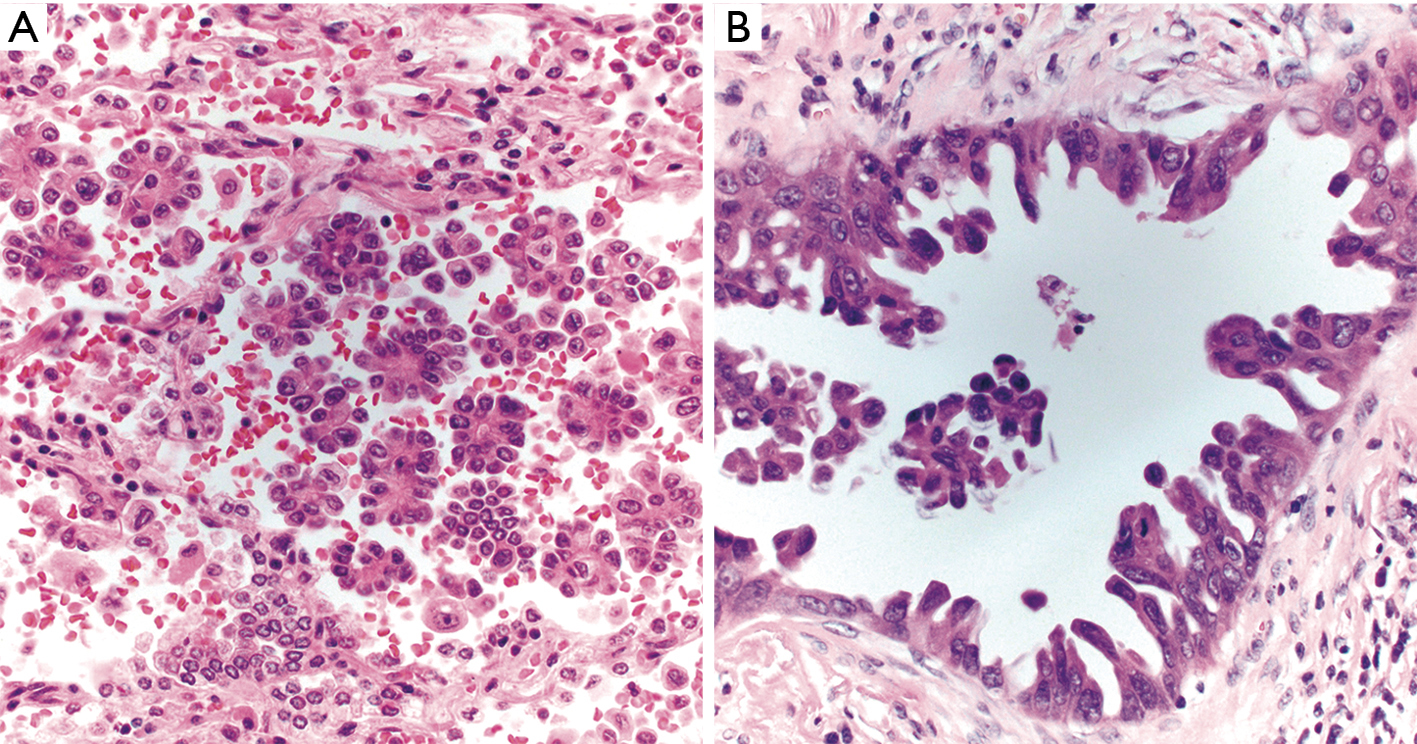 Figure 5 The micropapillary pattern in lung adenocarcinoma includes a variety of appearances, ranging from the classic form in which tumor cells lacking fibrovascular cores are arranged in papillary tufts, florets, and intraalveolar clusters (A) to the filigree form with its delicate lacelike narrow stacks of tumor cells (B) and the stromal form featuring infiltrating clusters of tumor cells within cleft-like spaces surrounded by stroma (not shown) (HE stain, ×400).

There have been several reports of pulmonary adenocarcinoma with predominantly intraalveolar single tumor cells mimicking desquamative interstitial pneumonia (23-26). The clinical outcome in these cases has been variable and whether this growth pattern can be considered high grade remains to be determined.

Based on amassed data, it appears likely that the WHO lung adenocarcinoma classification will need to be modified for various patterns to align more accurately with prognosis. Their similar behavior, coupled with the inherent difficulty in separating AIS and MIA, make it attractive to consider collapsing them into one category. While simple acinar formations are associated with an intermediate prognosis when they are the predominant growth pattern, data support recognizing a new category of high-grade tumors with 10% or more complex acinar, cribriform, or fused glands. Categorizing papillary adenocarcinoma with marked atypia as high grade also appears warranted. Lastly, with respect to micropapillary pattern, if it is present in any amount, classifying a tumor a micropapillary lung adenocarcinoma appears indicated (Figure 6). Promoting awareness of different micropapillary appearances in future modifications to the classification scheme will be worthwhile for improving detection of this aggressive histologic pattern.

Figure 6 Based on data that have emerged since the current lung adenocarcinoma classification was introduced, some patterns will likely need to be regrouped in future moderations to better align with their risk of recurrence.

Conflicts of Interest: The author has completed the ICMJE uniform disclosure form (available at http://dx.doi.org/10.21037/tlcr.2019.12.30). The series “Selected Highlights of the 2019 Pulmonary Pathology Society Biennial Meeting” was commissioned by the editorial office without any sponsorship or funding. The author has no other conflicts of interest to declare.