Lung cancer is the principal cause of cancer death worldwide (1). The vast majority of non-small cell lung cancer (NSCLC), diagnosed in advanced stages of disease, has a poor prognosis (2). To improve patient outcome thanks to targeted therapies, assessment of several clinical relevant predictive biomarkers is key (3). In advanced stages of NSCLC, the College of American Pathologists (CAP), the International Association for the Study of Lung Cancer (IASLC) and the Association for Molecular Pathology (AMP) identified panels of “must test genes” and “should test genes” (4) to be assessed by next generation sequencing (NGS) (5). Conversely, in early NSCLC stages no clear recommendations have been issued. To date, in this setting, only serum cancer related biomarkers [e.g., carcino-embryonic antigen (CEA)] have been proposed. While, these latter may somehow be useful predict response to chemotherapy and prognosis (6), they have low sensitivity and specificity, as diagnostic markers (7). Screening by low-dose spiral computed tomography (CT), has recently been proposed by Humphrey et al., who reported in high-risk persons only a 20% mortality rate reduction (8). Therefore, the unmeet need of molecular markers as diagnostic tool for lung cancer detection in clinical practice makes relevant the study published in this Translation Lung Cancer Research issue by Tu et al. They adopted well-established bioinformatic tools to identify potential biomarkers for the early diagnosis of NSCLC (9). In particular, the Authors interrogated the Gene Expression Omnibus (GEO) database to select the mRNA profiles of differentially expressed genes (DEGs) between tumoral and non tumoral patient samples. Three different gene expression profiles were taken into account: GSE19188, generated from 91 early NSCLC and 65 normal samples from 156 patients; GSE33532, derived from 80 early NSCLC and 20 normal specimens from 20 patients and GSE44077, consisting of 55 early NSCLC and 66 normal samples from 20 patients. On the whole, 221 DEGs were selected, excluding the DEGs overlaps of the three databases. As far as gene expression among DEGs is concerned, 60 genes evidenced an up-regulation, whereas 161 were down-expressed in early stage NSCLC respect to normal samples (9). Subsequently, a pathway reconstruction analysis was performed by using the Database for Annotation, Visualization and Integrated Discovery (DAVID). On the overall, by interrogating Gene oncology (GO) and Kyoto Enciclopedia of Genes and Genomes (KEGG) databases the up-regulated genes were principal involved in the mitotic nuclear and cell division, and cell proliferation; whereas genes within the down-regulated group determined signal transduction, angiogenesis, and cell adhesion (Figure 1). Additionally, the Authors carried out Protein-protein interaction (PPI) network of the selected DEGs in order to identify the interaction among proteins. From a prognostic point of view, the Authors underlined the correlation among high mRNA level of ubiquitin-conjugating enzyme E2T (UBE2T), UNF2, cyclin-dependent kinase inhibitor 3 (CDKN3), anillin (ANLN), Cyclin B2 (CCNB2), and Cytoskeleton Associated Protein 2 Like (CKAP2L) genes and an overall lower NSCLC patients survival rate (9). The Authors specifically pinpointed the potential role of these genes as predictive biomarkers for the early detection of NSCLC. Moreover, UBE2T plays an important role in the activation of PI3K/Akt pathway, and its up-regulation was associated with tumor progression, invasion and metastatization of different cancer types, including NSCLC (10). In addition, high expression levels of UBE2T were related to disease recurrence after surgery (10). CDKN3 was associated with the dephosphorilation of CDK2, and its high expression is a negative prognostic marker in lung adenocarcinoma (11). ANLN showed an important role in cancer development and progression. An in vitro study on NSCLC cells underlined that the down-regulation of ANLN reduced dramatically cell proliferation (9). CCNB2 is associated with the G2/M transition during the cell cycle (12). It has been reported the association between the increasing level of CCNB2 protein expression and poor outcome in NSCLC patients (13). Conversely, the role of UNF2 and CKAP2L in NSCLC still remain unknown, need to be deeply investigated. 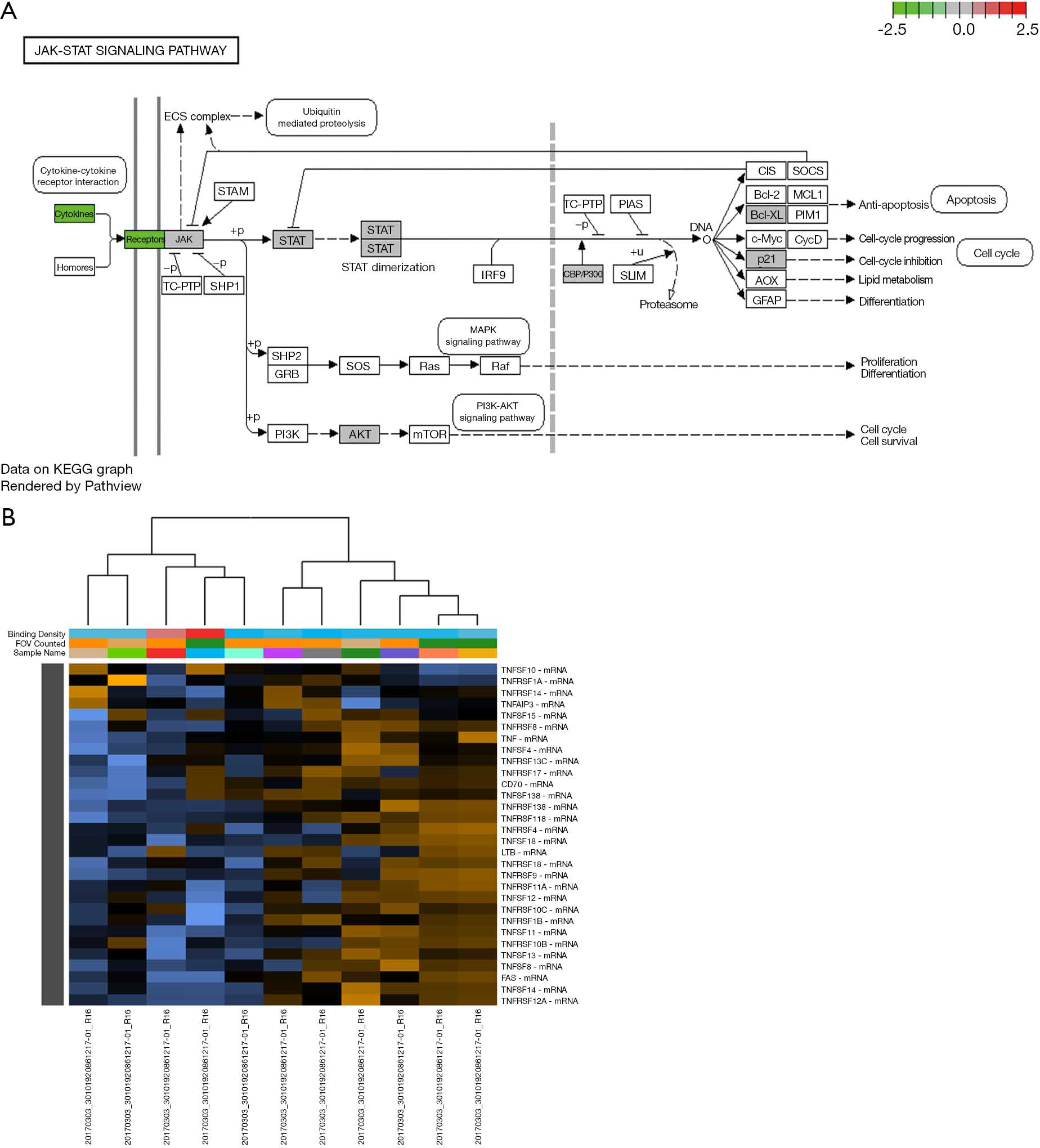 Figure 1 Exemplificative visualization of a pathway reconstruction based on Kyoto Enciclopedia of Genes and Genomes (KEGG) graph built on gene expression data obtained by n-Counter (Nanostring) and analyzed with n-Solver Software 4.0 at the Predictive Molecular Pathology Lab, Department of Public Health of University Federico II of Naples.

On the overall, the paper by Tu et al. strongly emphasized the role of DEGs not only as prognostic but also as potential useful targets for the early diagnosis and treatment of NSCLC patients (9). They highlighted the central role of comprehensive bioinformatics analysis for biomarker screening, as a preliminary step to plan targeted in vivo validation studies. Despite the established role of most of the identified DEGs in crucial stages of cancer development and metastatization, several aspects, as suggested also by the Authors, remain to be further addressed. In fact, the mechanisms of action of some of the genes is not still understood and further knowledge is required to conceivably screen patients in the early stage of disease. Since screening NSCLC by invasive tissue based biomarkers analysis is unfeasible, it would be very interesting in further studies to assess the concordance rate between the data obtained on tissue and paired liquid biopsy. These evidences concur with those generated by a prospective study by Chen et al., who in early stage disease employed a targeted NGS approach to evaluate the presence of plasma circulating tumor DNA (ctDNA) as a predictive biomarker (14). On the overall, these Authors showed that the vast majority of early stage NSCLC patients (89.7%) had ctDNA that was quantifiable and potentially testable (14) to detect cancer in asymptomatic high risk patients (14). An integrated radiological and liquid biopsy approach may be a valid tool to identify early stages NSCLC with a significant reduction of costs for the healthcare system and discomfort to the patients (15). A limit of this approach may be related to the low concentration of ctDNA in the early stage of disease; this latter would be overcome by combining DNA, RNA and methylation based analysis (16).

In conclusion, the paper by Tu et al. represents an important contribution in the field of biomarkers role in early stage NSCLC. To favor implementation in the clinical setting, prospective evaluation in randomized trials and matched analysis of tissue and plasma samples are required.