Molecular gene mutation profiles, TMB and the impact of prognosis in Caucasians and east Asian patients with lung adenocarcinoma

Lung cancer is the leading cause of cancer-related deaths worldwide. The primary pathological type of lung cancer is non-small cell lung cancer (NSCLC), and most NSCLC is classified as lung adenocarcinoma, which accounts for more than 50% of lung cancers (1). With a better understanding of the genetic profiles of lung adenocarcinoma, targeted therapy has become an essential treatment for this cancer type. Epidermal growth factor receptor (EGFR) mutations are the most critical driver mutations. The incidence of EGFR mutations is approximately 11% in Caucasian patients with lung cancer and 27–34% in Asian patients, and as high as 40–60% in Asian lung adenocarcinoma patients (2,3). The clinical application of EGFR-tyrosine kinase inhibitors (EGFR-TKIs), including erlotinib and gefitinib, has greatly prolonged the survival time of NSCLC patients with EGFR mutations (4,5).

Tumor mutational burden (TMB), is the total number of nonsynonymous mutations (including point mutation and insertion/deletion mutation) per megabase somatic base in the tumor tissue, that is, the mutation density of the tumor gene (6). Generally speaking, the more mutations the lesion harbors, the higher the TMB and the better the tumor response to immunotherapy (7). For most tumors, the effectiveness of treatment with PD-1 inhibitors was almost linear with TMB (8). Moreover, for certain drugs (such as Opdivo), compared to PD-L1 level, the choice of TMB as a biomarker for predicting the efficacy of NSCLC treatment can better differentiate the beneficial population.

With the popularity of immunotherapy and detailed studies of TMB, a significant negative correlation has been found between EGFR mutation status and high TMB (TMB-H). However, the incidence of mutations in the genes of each signaling pathway and their correlation with TMB is still unclear. The role of EGFR mutations and TMB in prognosis is also inconclusive (9).

Therefore, this study reviewed the EGFR test results and survival data of 647 Chinese patients with lung adenocarcinoma. The whole-exome sequencing (WES) and survival data of 454 cases of lung adenocarcinoma were downloaded from The Cancer Genome Atlas (TCGA) database. These two groups were stratified according to disease stage and ethnic group, followed by a comparative analysis. Since the above conclusions are based on different genetic testing methods, in this study, WES was performed on tumor tissues from 49 Chinese patients with advanced lung adenocarcinoma. Those data were compared with the WES data from Caucasian patients in the TCGA database for a further head-to-head comparative analysis. The results showed that tumor signaling pathways and their relationship with TMB exhibit variations in different ethnic groups, and immunotherapy strategies might also differ according to TMB.

Data from patients in the TCGA database

All data analyzed were downloaded using TCGAbiolinks (8), which can access the National Cancer Institute (NCI) Genomic Data Commons (GDC) through its GDC Application Programming Interface (API), in order to search, download and prepare relevant data for analysis in R. Briefly, the somatic mutation data of lung adenocarcinoma from the Cancer Genome Atlas Lung Adenocarcinoma (TCGA-LUAD) project (10) were searched and downloaded with GDCquery and GDCprepare, and the clinical data of patients were downloaded with GDCquery_clinic. Then, the data were merged and filtered using several packages in R, such as dplry and stringr (11).

The Kaplan-Meier curves were generated, and Cox regression analyses were performed using survminer (12) and survival package that provides functions for facilitating survival analyses and visualization in R.

Annotation and analysis of variants

The vcf files containing the somatic mutations generated by VarDict were annotated with ANNOVAR (16) and then converted to MAF files using maftools (17).

The Chinese lung adenocarcinoma data was derived from a total of 647 cases from Shanghai Pulmonary Hospital. EGFR mutations were detected in 57% of the patients by reverse transcription-polymerase chain reaction (RT-PCR), and early- and late-stage patients accounted for 64.5% and 35.5% of all cases with mutations, respectively (Table S1). In the WES data of 454 lung adenocarcinoma patients from the TCGA, Asians, Caucasians, and African Americans, each accounted for 1.8%, 86.6%, and 11.7%, respectively. Among the Caucasian patients, early-stage patients accounted for 78.4%. 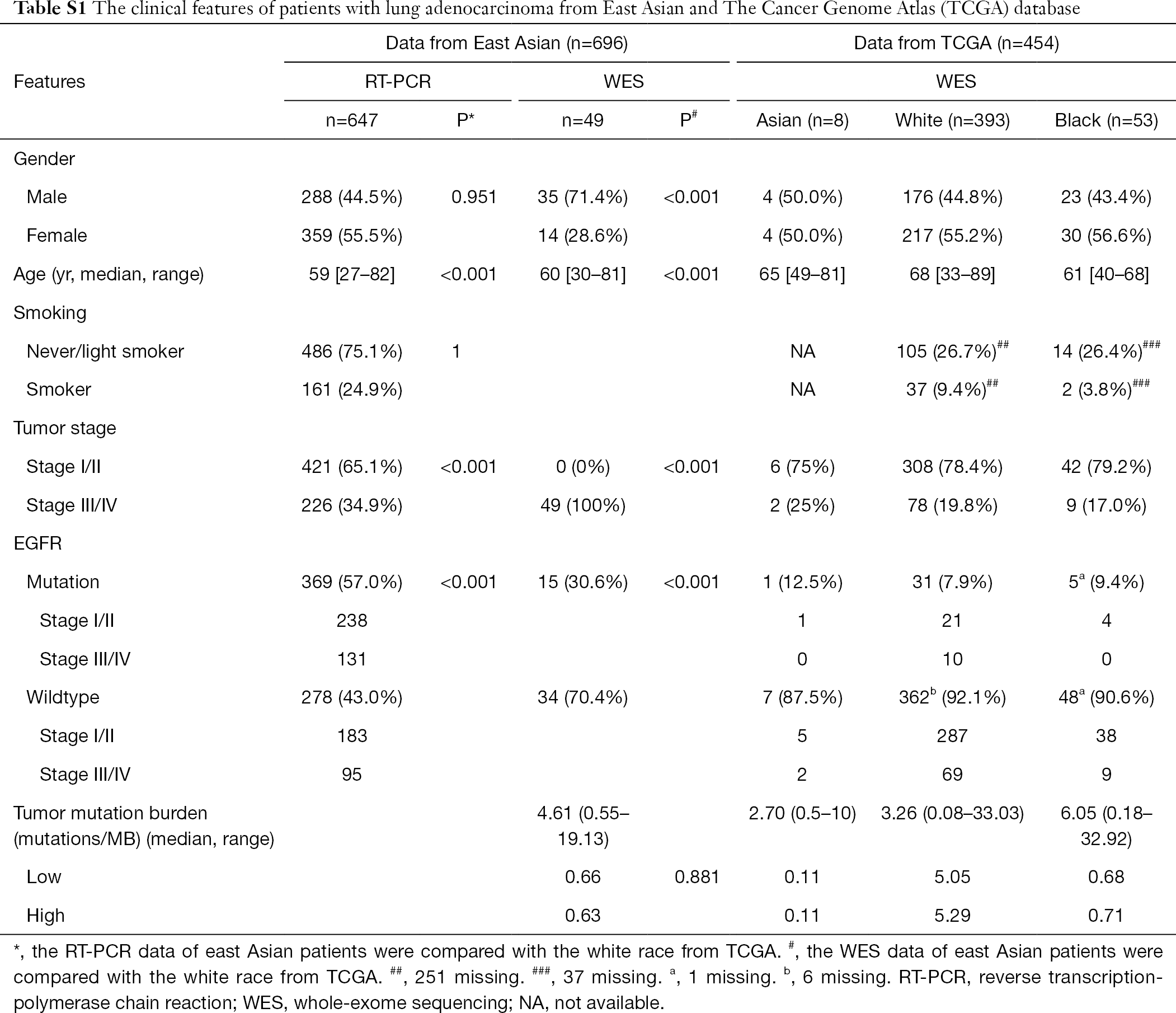 Of 454 patients whose WES data were downloaded from the TCGA database, only 79 Caucasian patients were diagnosed with advanced lung adenocarcinoma. Among 61 Chinese NSCLC patients with WES data, 12 lung squamous cell carcinoma (LUSC) patients were removed, leaving 49 lung adenocarcinoma. However, because Chinese patients with lung adenocarcinoma all had an advanced-stage disease, this study compared the WES data of these two groups of patients (Figure S1). Genes were classified into 11 signaling pathways (RTK-RAS, NRF2, TGF-β, PI3K, WNT, MYC, Hippo, p53, cell cycle, Notch and DDR), and the incidence of mutations in the genes of each signaling pathway was analyzed (Figure S2). Overall, the incidence of mutations was significantly different among patients of different ethnicities, especially in the NOTCH2 and TGFβR2 (Figure S2). The incidence of mutations in the TGF-β and RTK-RAS pathways in Chinese patients was significantly higher than that in Caucasian patients, with P values of 0.012 and 0.016, respectively (Figure 1A). 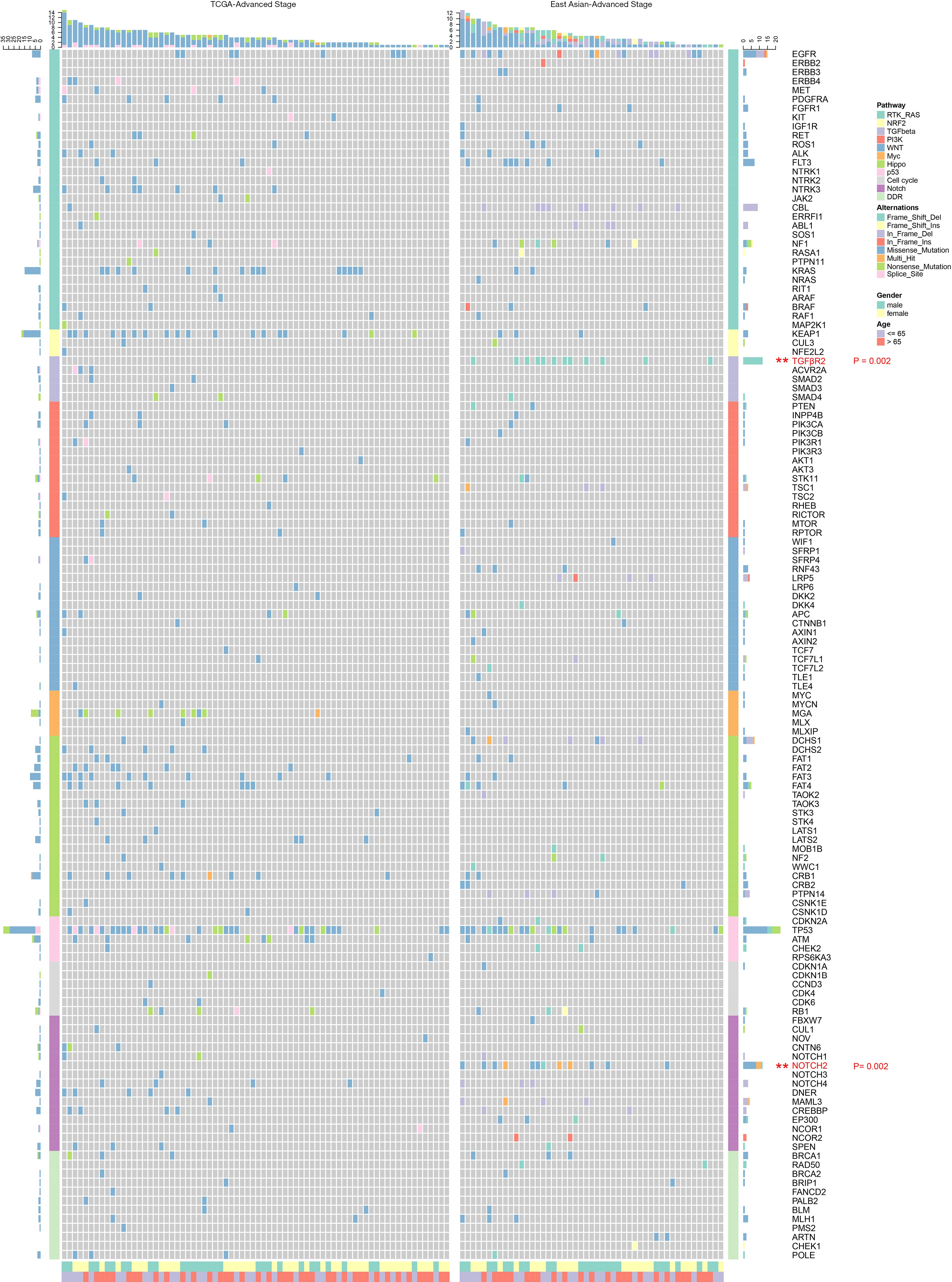 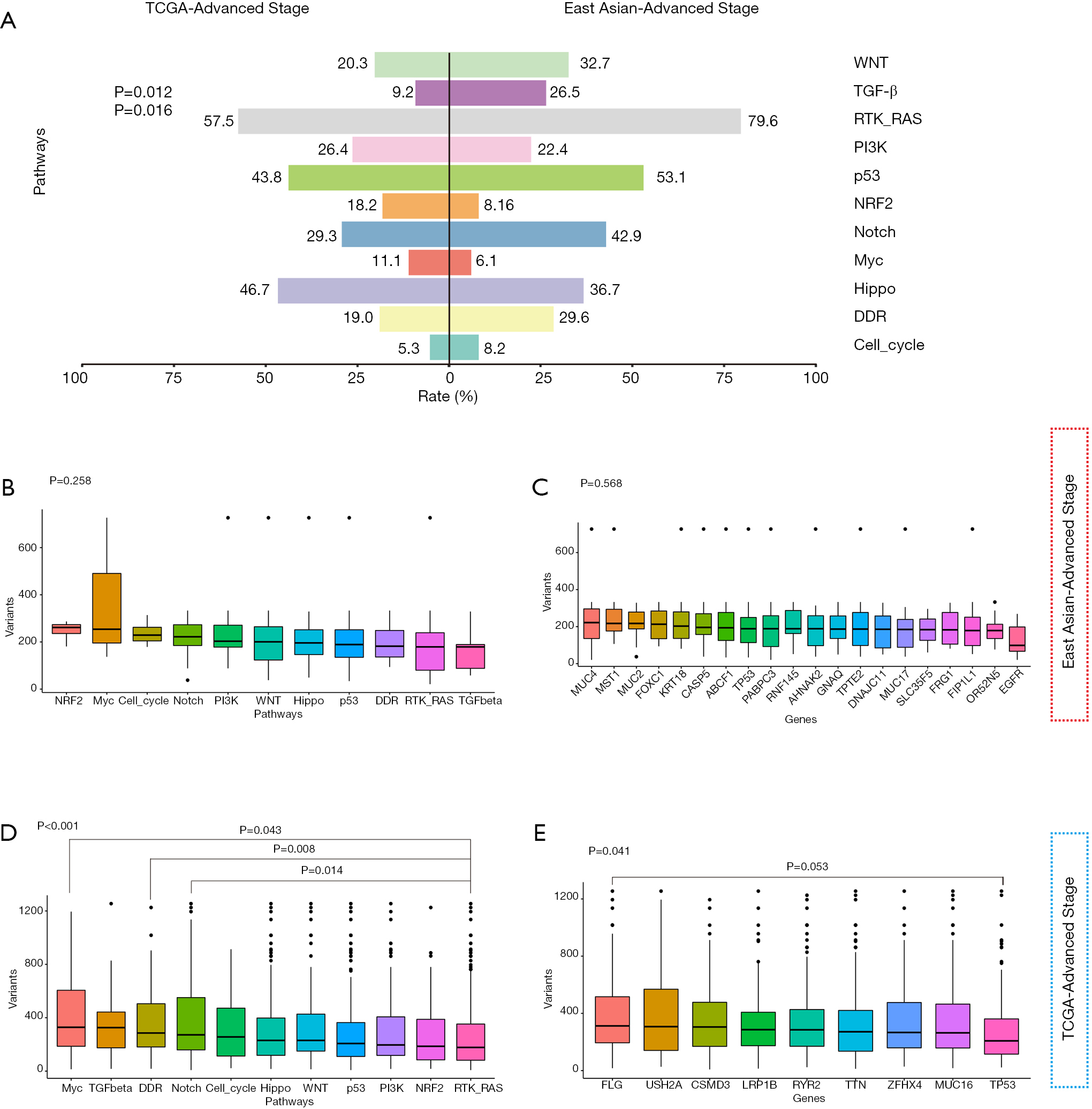 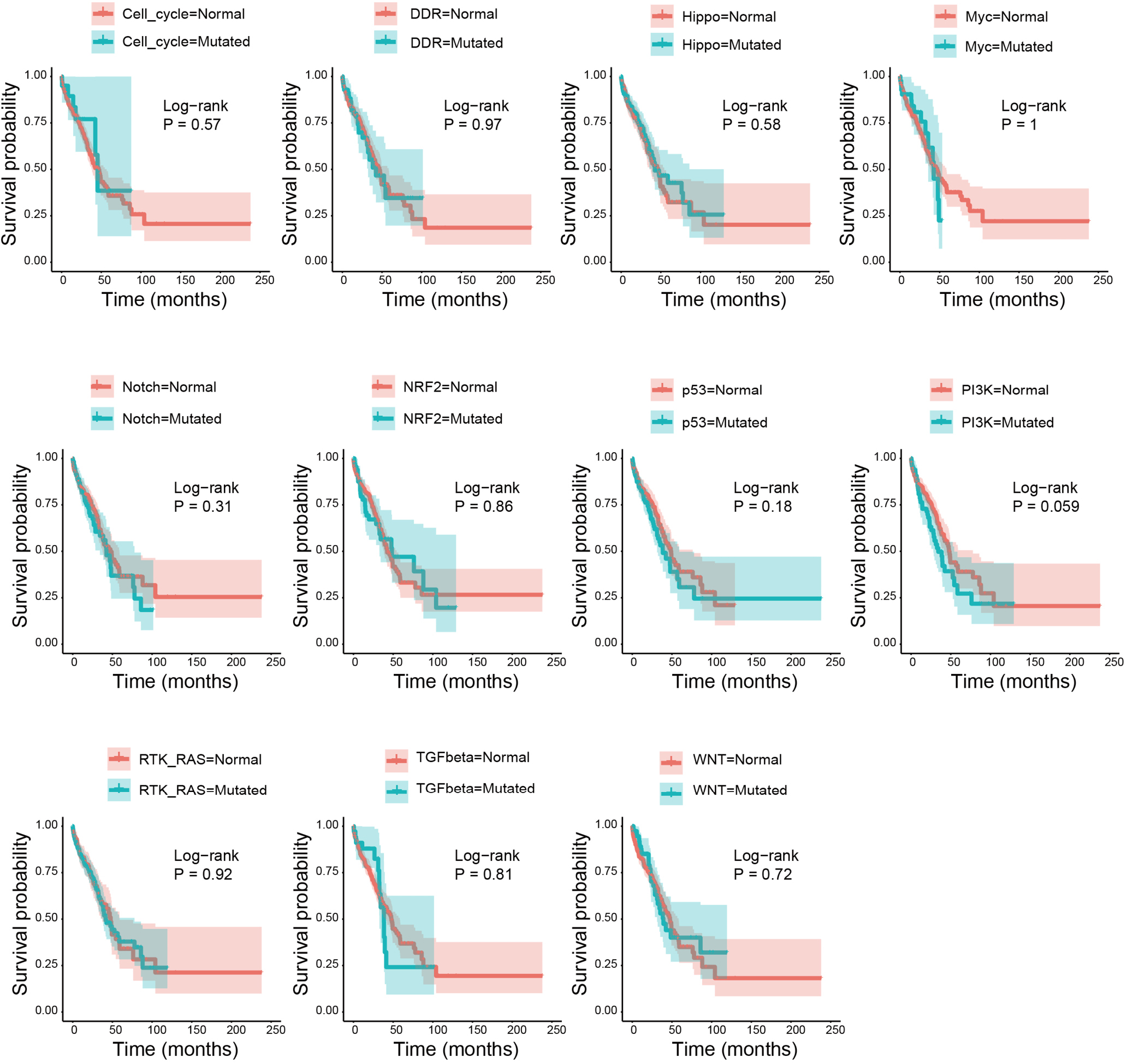 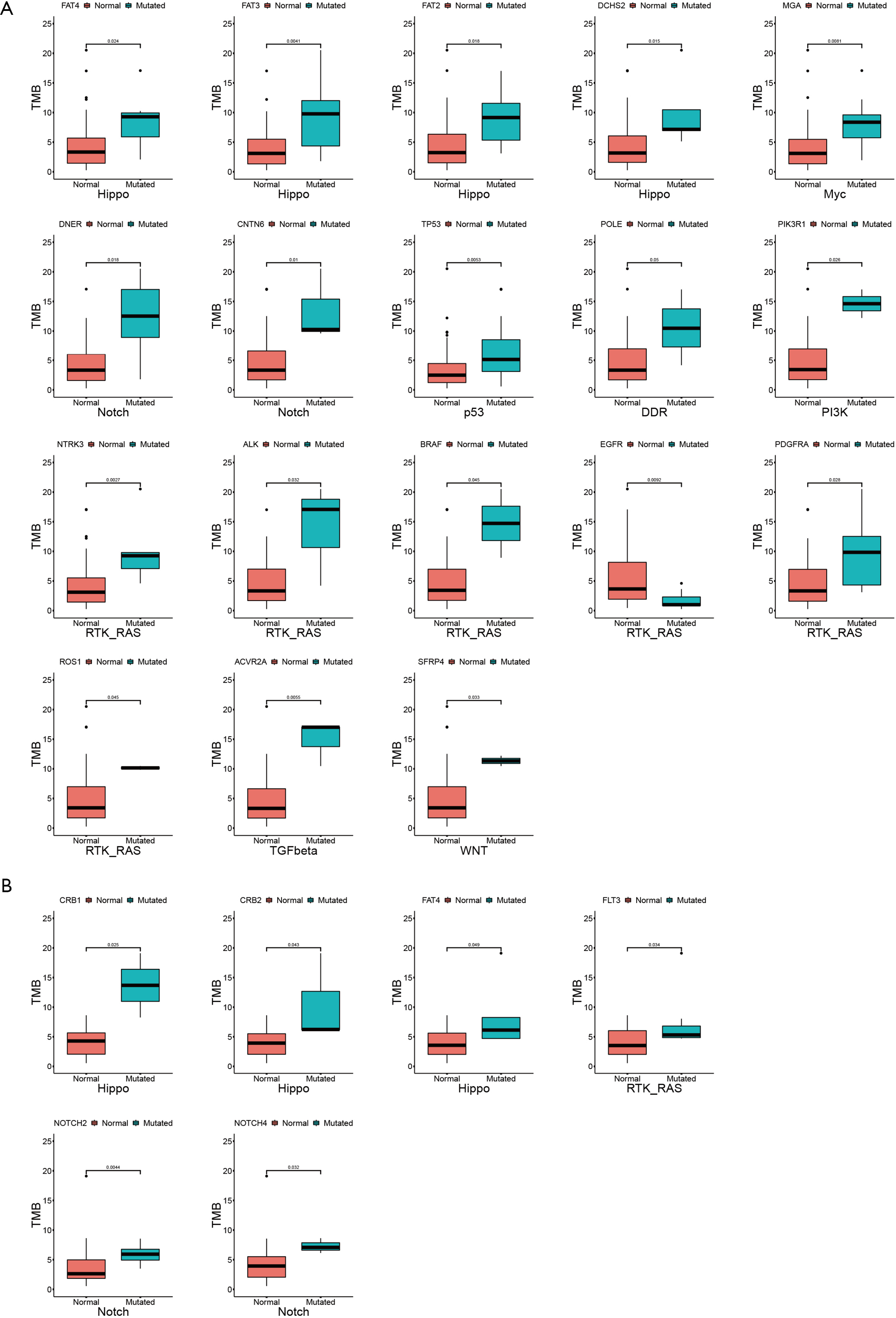 Figure S4 (A) Eighteen genes from TCGA database and (B) 6 genes from the Chinese population in 11 signaling pathways were significantly correlated with TMB. TCGA, The Cancer Genome Atlas; TMB, tumor mutational burden. 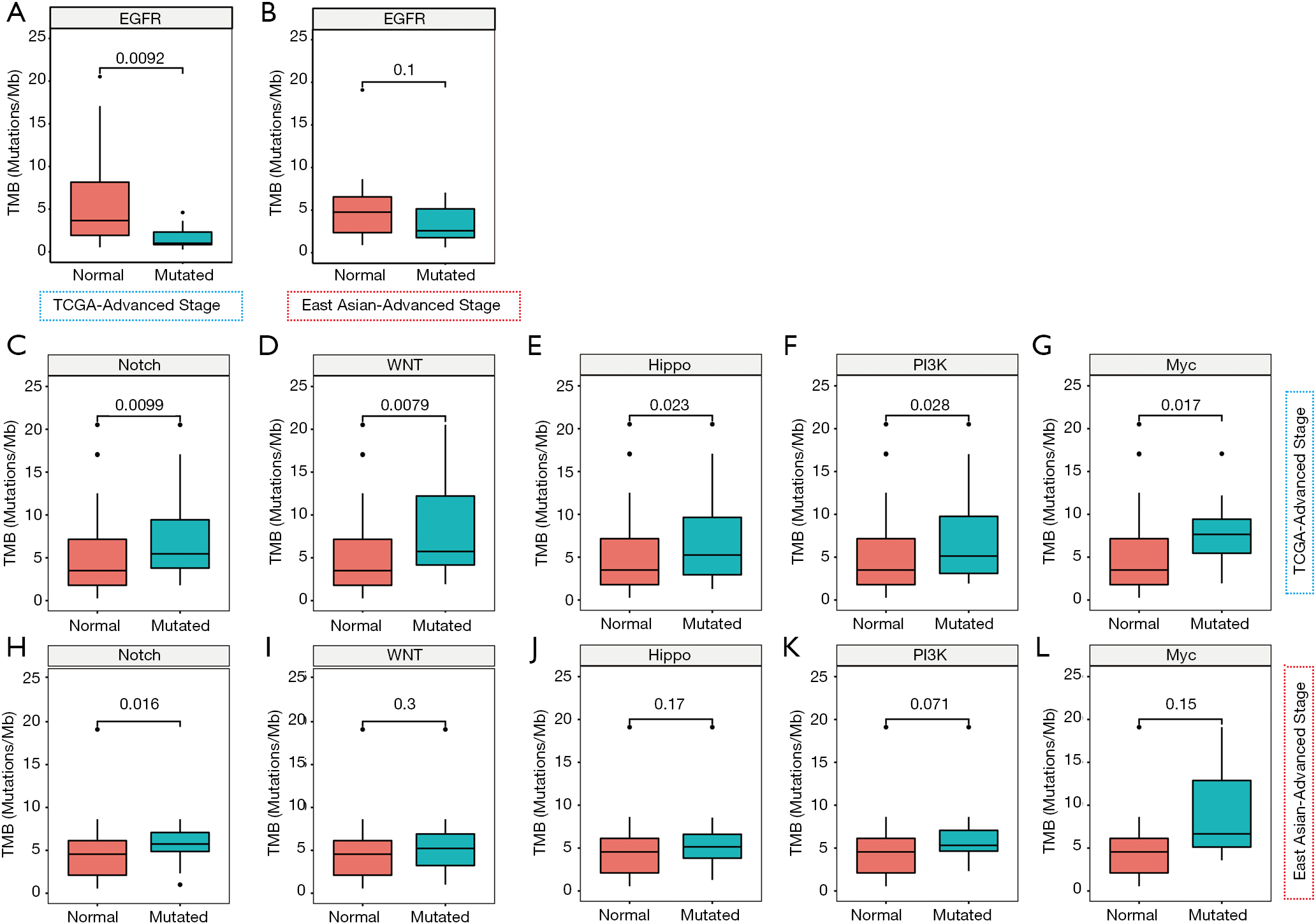 The median TMB of Chinese patients was 4.61 mutations/MB, while the median TMB of the Caucasian patients was 3.26 mutations/MB (Table S1). The difference between the two groups was not statistically significant. No significant differences were seen in overall survival (OS) between the patients of TMB-H and TMB-L status patients (Figure S5A,B,C,D). The Caucasian patients at different stages did not show significant differences in TMB compared with the Chinese patients (P=0.86, Figure S5E). In the patients from the TCGA database, the mutation status of the Notch, WNT, Hippo, PI3K, and Myc signaling pathways were significantly associated with TMB-H, whereas in the Chinese patients, only the mutation status of the Notch pathway was significantly correlated with TMB-H (Figure 2C,D,E,F,G,H,I,J,K,L). 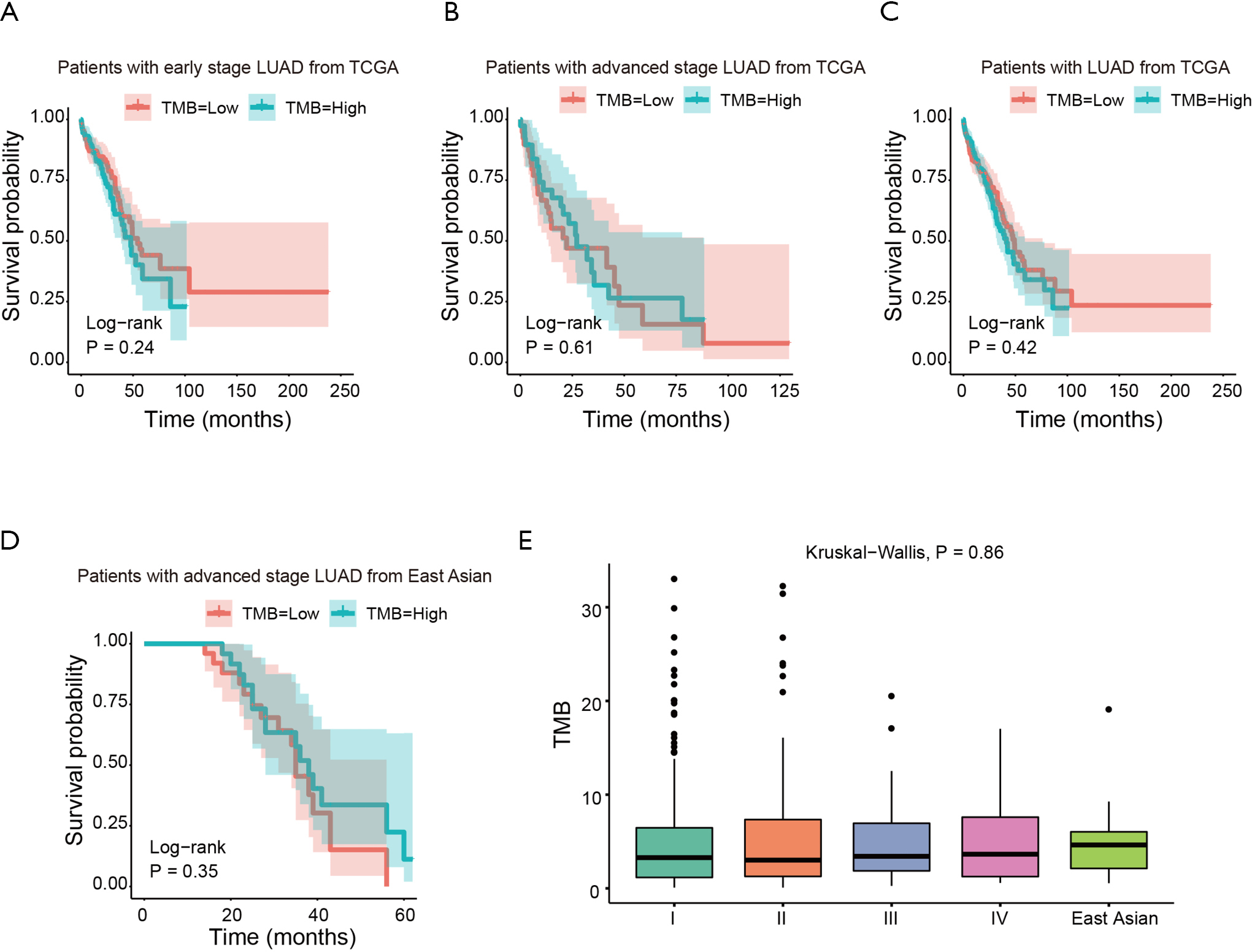 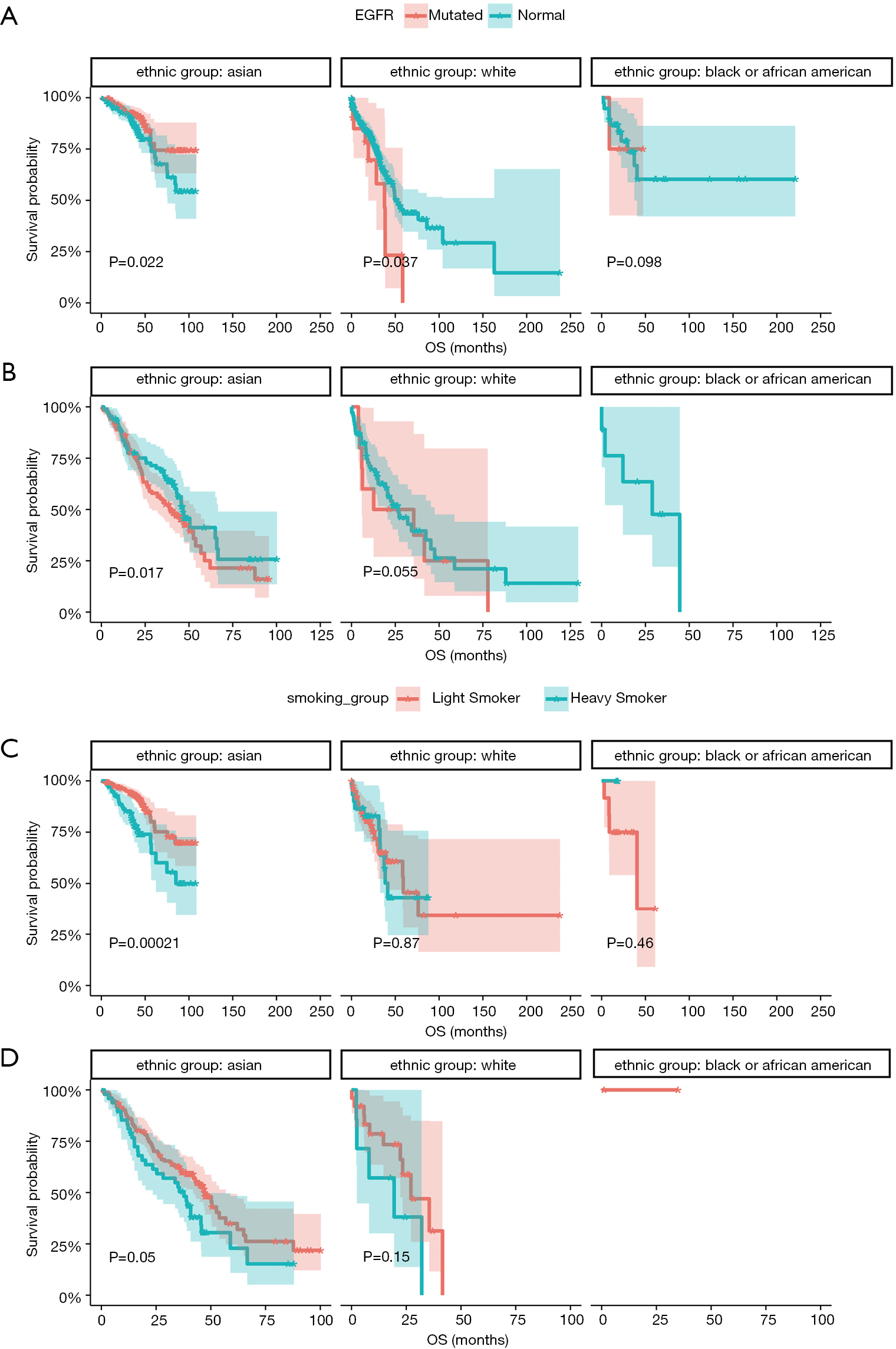 TMB may be the most critical molecular marker for anti-PD-1 therapy (7,23). We conducted a comprehensive analysis of the correlation of TMB with 11 signaling pathways and their associated genes in patients of different ethnic groups. We found no differences in TMB in patients with different cancer stages or different ethnic groups. Differences in TMB were present in patients with variations in different pathways. In Caucasians, if mutations occurred in Notch, WNT, Hippo, PI3K, Myc signaling pathways, the TMB of these patients was significantly better than that of patients whose tumors did not have the mutations. However, in the East Asian population, only variations in Notch were related to TMB. The Notch pathway is closely related to immunotherapy response. It has been reported that activation of the Notch pathway inhibited the activation of T cells in tumors and inhibition; the pathway can increase the killing effect of T cells (24). Patients with NOTCH1 gene mutations exhibit better treatment responses after anti-PD-1 therapy (25). Some reports have also shown that the WNT pathway modulated PD-L1 expression in triple-negative breast cancer and melanoma (26,27). Therefore, these studies supply valuable information for combination therapies, including anti-PD-1 treatment.

Controversial results have been reported on whether TMB is a prognostic factor. Devarakonda et al. (28) reported that TMB was an indicator of a good prognosis in all NSCLC cases, despite that no significant correlation was observed between TMB and disease-free survival (DFS) (P=0.171) or OS (P=0.091) according to the data from the 908 cases of NSCLC in the Lung Adjuvant Cisplatin Evaluation (LACE)-Bio-II study. However, studies from Japan showed poorer postoperative prognosis in patients with higher TMB (HR =12.3, P=0.019) (29). Our results are like the LACE study. TMB demonstrates no correlation with the prognosis of patients with either early- or late-stage disease. The difference described above is caused by different TMB test methods and cut-off values. The gold standard of TMB is WES. However, the WES probes used in numerous studies cover different regions, which may cause inconsistency in the standards of the TMB calculation. Furthermore, the cut-off values for TMB have not been determined. In the abovementioned LACE study, 8 mutations/M was used, while the Japanese study used 62 mutations/patient. Therefore, the establishment of standards for TMB testing is urgently needed.

For the first time, we systematically analyzed the genetic variations associated with TMB, but this study still has several limitations. The differences in the TMB assessment criteria, WES test methods, and differences between the distinct stages of TMB may all affect the evaluation of the results. Thus, the results of this study should be confirmed in a more prospective study.

In conclusion, first, the comparison of tumor signaling pathways and gene mutation profiles between Caucasians and East Asians showed racial differences in terms of variations in the TFGβ and RTK-RAS pathways. Second, the mutations in 5 signaling pathways and 18 genes were all significantly associated with the differences in TMB in the Caucasian population, only variations in the Notch pathway and 6 genes were correlated with an increase in TMB in the East Asian population. Finally, we found that TMB was not correlated with patient prognosis, and EGFR mutations showed a better prognosis in East Asian patients, whereas the inverse was observed in Caucasian patients. These findings reveal differences in genetic variations between Caucasian and East Asian patients with lung adenocarcinomas and ease our research on therapeutic strategies, especially immunotherapeutic strategies, and the identification of potential biomarkers.

This work was sponsored by Shanghai Tongshu Biotechnology Co., Ltd., and supported by Pfizer Investment.

Conflicts of Interest: All authors have completed the ICMJE uniform disclosure form (available at http://dx.doi.org/10.21037/tlcr-20-457). The authors have no conflicts of interest to declare.

Ethical Statement: The authors are accountable for all aspects of the work in ensuring that questions related to the accuracy or integrity of any part of the work are appropriately investigated and resolved. The study was conducted in accordance with the Declaration of Helsinki (as revised in 2013). The institutional review board approved this study of Shanghai Pulmonary Hospital and individual consent for this retrospective analysis was waived.