The germline mutations in multiple genes confer significant risks to several cancers, including breast, ovarian, colorectal cancer and melanoma. In contrast, the genetic predisposition of lung cancer has not yet been elucidated. Although most lung cancers develop sporadically and cigarette smoking is considered to be the predominant risk factor (1), many lung cancer patients present a family clustered pattern. It was reported that a family history confer a substantial risk to lung cancer, especially for those with two or more affected individuals in a family (2).

Although some germline mutations, such as those in EGFR and HER2, have been identified in lung cancer in previous observations (3-14), the susceptibility of lung cancer with known hereditary cancer-related germline mutations has not been investigated, and the correlation between germline mutations and somatic mutations has not been studied in detail. The information is sorely lacking among the Chinese population. In this study, we studied the potential susceptibility of lung cancer by categorizing the germline mutations of individual lung cancer patients into three groups based on pathogenicity. Germline and somatic mutation spectrum for each group were obtained by next-generation sequencing (NGS) with a 58-gene panel and a 605-gene panel, respectively. Potential risk factors, such as age, sex, family history, and cancer characteristics, such as cancer type, mutation frequency, tumor mutation burden (TMB) and aberrant pathways, were investigated and compared.

The study was designed and implemented in four Chinese hospitals, and both cancer tissue and blood samples were collected retrospectively. The study was designed to include as many non-small cell lung cancer (NSCLC) patients as possible, as long as the tissue or blood samples were available for next generation sequencing (NGS). As a result, samples collected between June, 2018 and June, 2019 from 1,026 NSCLC patients were obtained based on the availability of samples for NGS test in the participating hospitals, including 792 patients with adenocarcinoma (ADC), 222 patients with squamous cell carcinoma (SCC), 6 patients with large cell carcinoma (LCC) and 6 patients with adenosquamous carcinoma (ASC) (Table 1). Information on clinicopathological status of all patients was collected (Table 1). Family history here is defined as: the confirmed lung cancer patient has at least one immediate family member (first degree relatives) who had a history of lung cancer diagnosis. The immediate family member includes father, mother, brother(s), sister(s), son(s), daughter(s). The collected samples involved tissue samples, including formalin-fix paraffin-embedded (FFPE) samples or frozen samples from surgery or needle biopsy, and blood samples obtained at the time of confirmed lung cancer diagnosis. All technicians were blinded to the clinical information of subjects. The classification of all conditions was based on diagnosis from imaging examinations and subsequent pathological examinations. None of the subjects received chemotherapy, radiotherapy, targeted therapy or immunotherapy before tissue or blood samples were collected. The somatic sequencing data presented in this study were from FFPE samples or frozen tissue samples. Germline sequencing data was obtained from the corresponding genomic DNA of white blood cells. 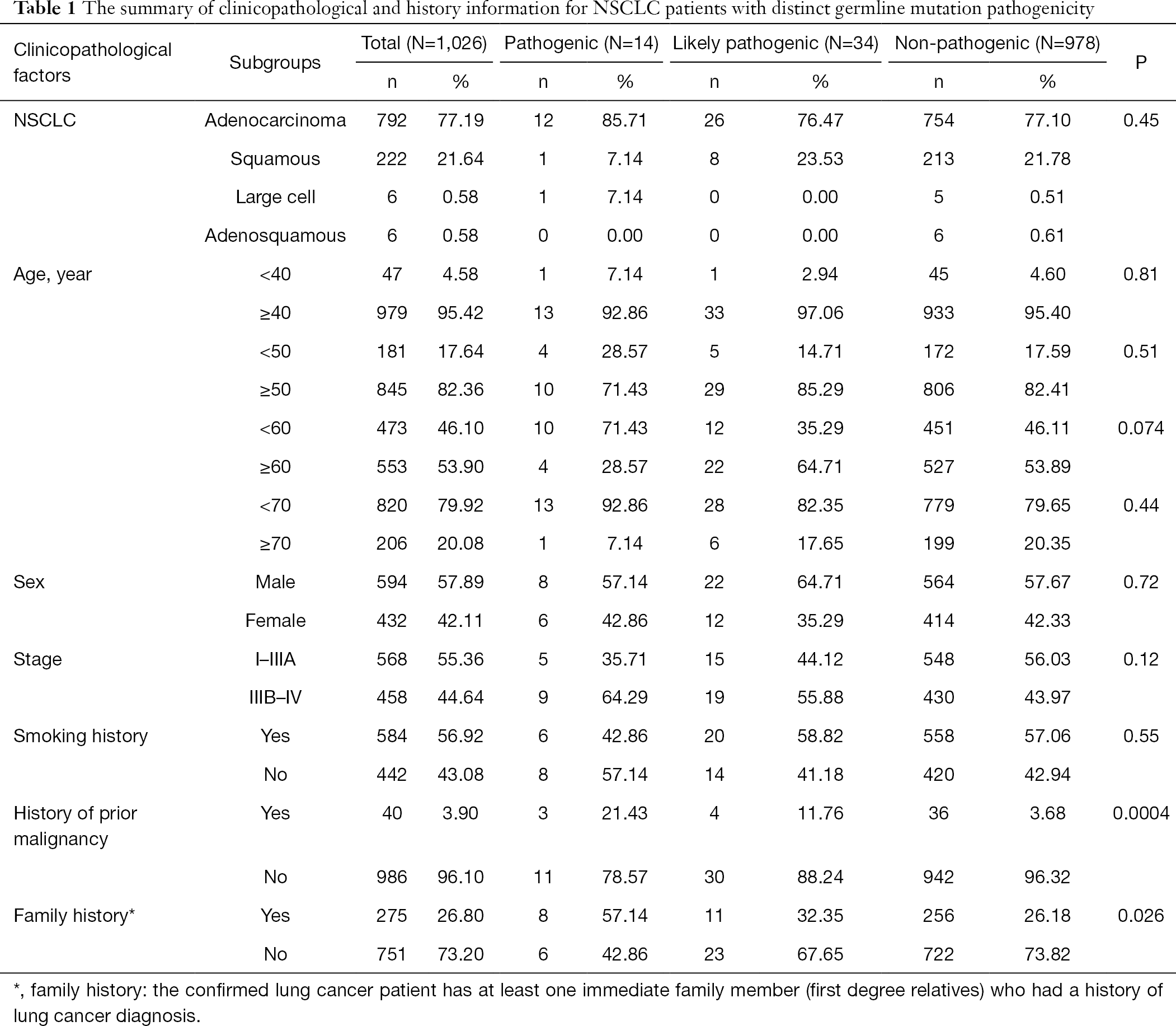 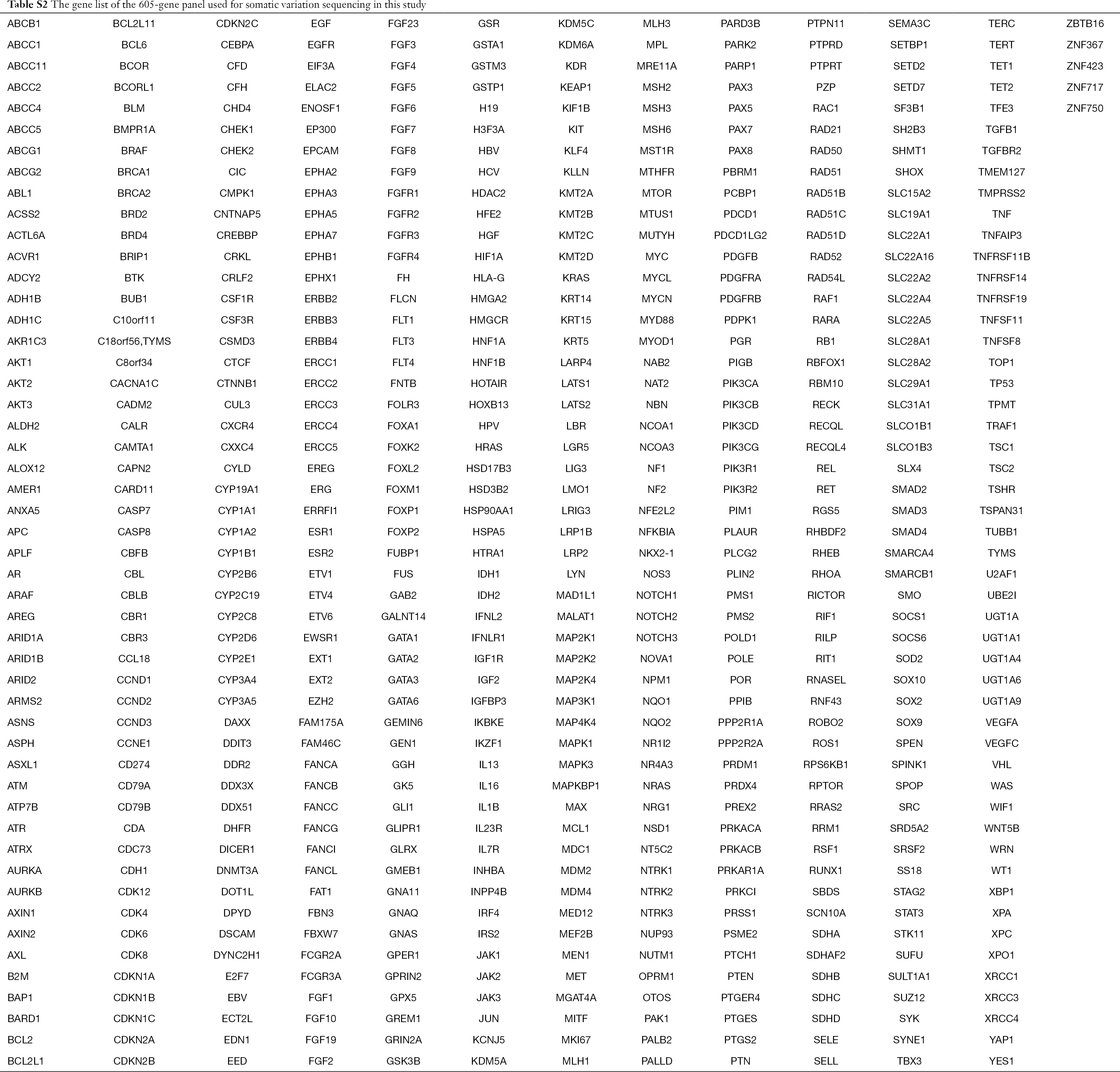 Data which meet the following criteria were chosen for subsequent analysis: the ratio of remaining data filtered by fastq in raw data is ≥85%; the proportion of Q30 bases is ≥85%; the ratio of reads on the reference genome is ≥85%; target region coverage ≥98%; average sequencing depth in tissues is ≥2,200×. The called somatic variants need to meet the following criteria: the read depth at a position is ≥20×; the variant allele fraction (VAF) is ≥2% for tissue and PBL genomic DNA; somatic-P value ≤0.01; strand filter ≥1. VAF were calculated for Q30 bases. The copy number variation (CNV) was detected by CNVkit version 0.9.3 (https://github.com/etal/cnvkit). Further analyses of genomic alterations were also performed, including single nucleotide variants (SNVs), CNVs, insertion/deletion (Indels), fusions and structural variation.

Interpretation of pathogenicity of germline mutations and calculation of somatic TMB

Pathogenicity of germline mutations was defined and predicted based on the five-grade classification system according to the American College of Medical Genetics and Genomics (ACMG) Guidelines for the Interpretation of Sequence (15). The VUS, benign and likely benign mutations were defined as the non-pathogenic group (Non-P) in this study. As a result, all germline mutations were categorized into pathogenic (P), likely pathogenic (LP) or non-pathogenic group (Non-P) in this study. TMB was calculated by dividing the total number of tissue non-synonymous SNP and INDEL variations (VAF >2%) by the full length of the exome region of the 605-gene NGS panel (Table S2). Genomic sequence from the DNA of PBLs was used for genomic alignment when calling the somatic mutations.

Statistical analysis was performed and figures were plotted with GraphPad Prism 5.0 software (GraphPad Software, Inc, La Jolla, CA 92037, USA). Student t-test was performed when two groups were compared, and ANOVA and post hoc tests were performed when three or more groups were compared. Chi-square test and Fisher test were performed when rate or percentage was compared for significance. Figures for mutation spectrum were made with the R software (https://www.r-project.org/). Data for pathway enrichment analysis was analyzed using the method described by DAVID Bioinformatics Resources 6.8 (https://david.ncifcrf.gov/) and visualized by corresponding packages of the R software. The odds ratio was calculated based on the frequency of a certain germline mutation from the Genome Aggregation Database (gnomAD) in general population or East Asian population and the corresponding frequency of mutation obtained from this study. The odds ratio and 95% confidence interval (CI) for each germline mutation was calculated using the calculation module from the SPSS 17.0 software (IBM China Company Limited, Beijing 100101, China). P<0.05 is statistically significant. 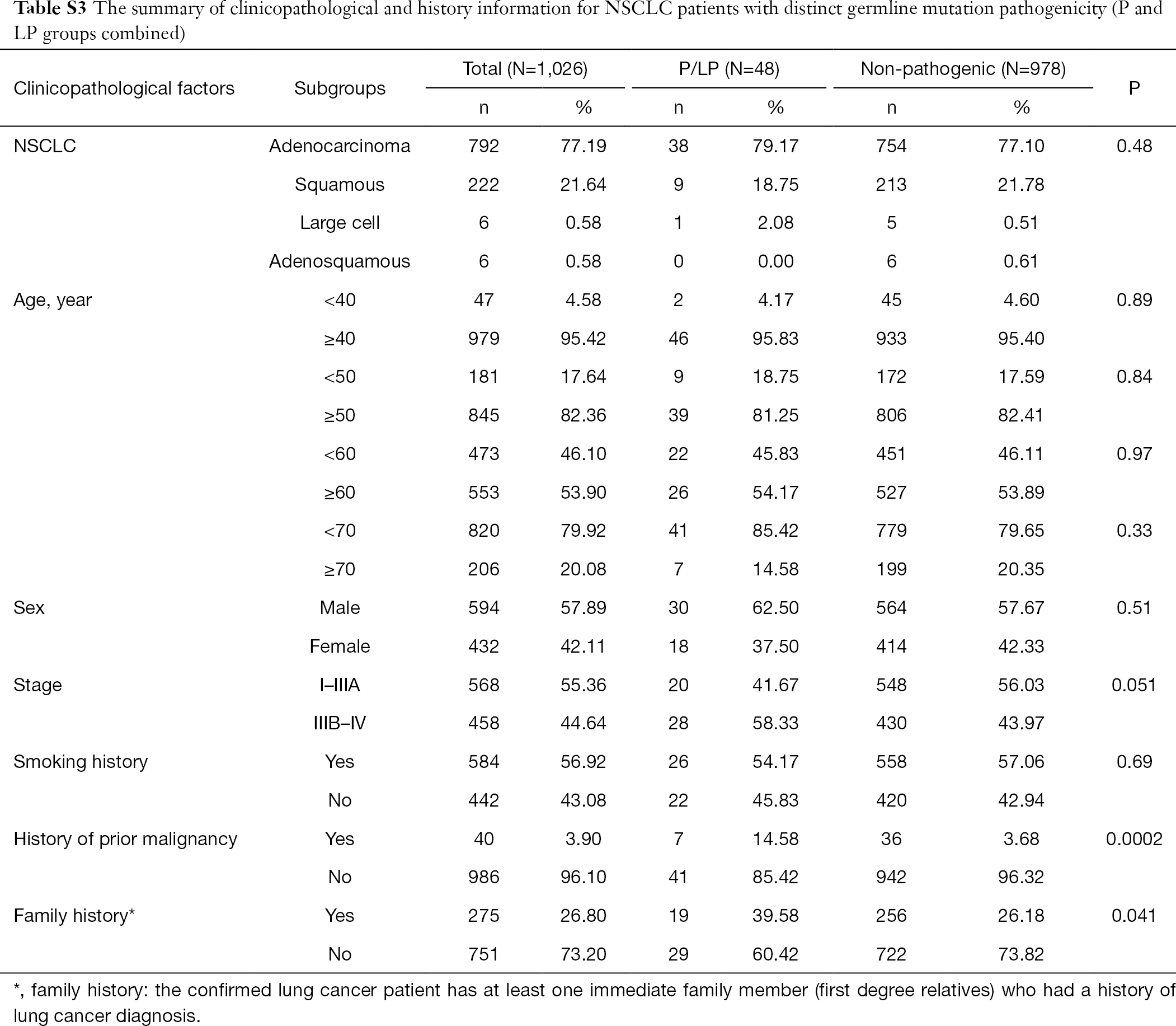 Detailed study identified 6 out of 14 patients in the P group carried BRCA2 pathogenic mutations (6/14), followed by CHEK2 (3/14) and ATM (2/14) (Table 2, Figure 1A). In the LP group, 4 out of 34 patients carried NTRK1 mutations (4/34), 4 carried EXT2 mutations (4/34), followed by BRIP1(3/34) and PALB2 (3/34) (Table 2, Figure 1B). The functions of genes with pathogenic and likely pathogenic mutations mainly involved DNA repair (BRCA1 and BRCA2, BLM, RAD50, BRIP1, MLH3), cell cycle regulation (such as CHEK2, ATM, NTRK1 and EPCAM) and tumor suppressor (such as PALB2 and BRCA1). Most of these fragmental mutations were located within or close to known important protein functional domains (Figure 1C,D) and may have great impacts on protein function. 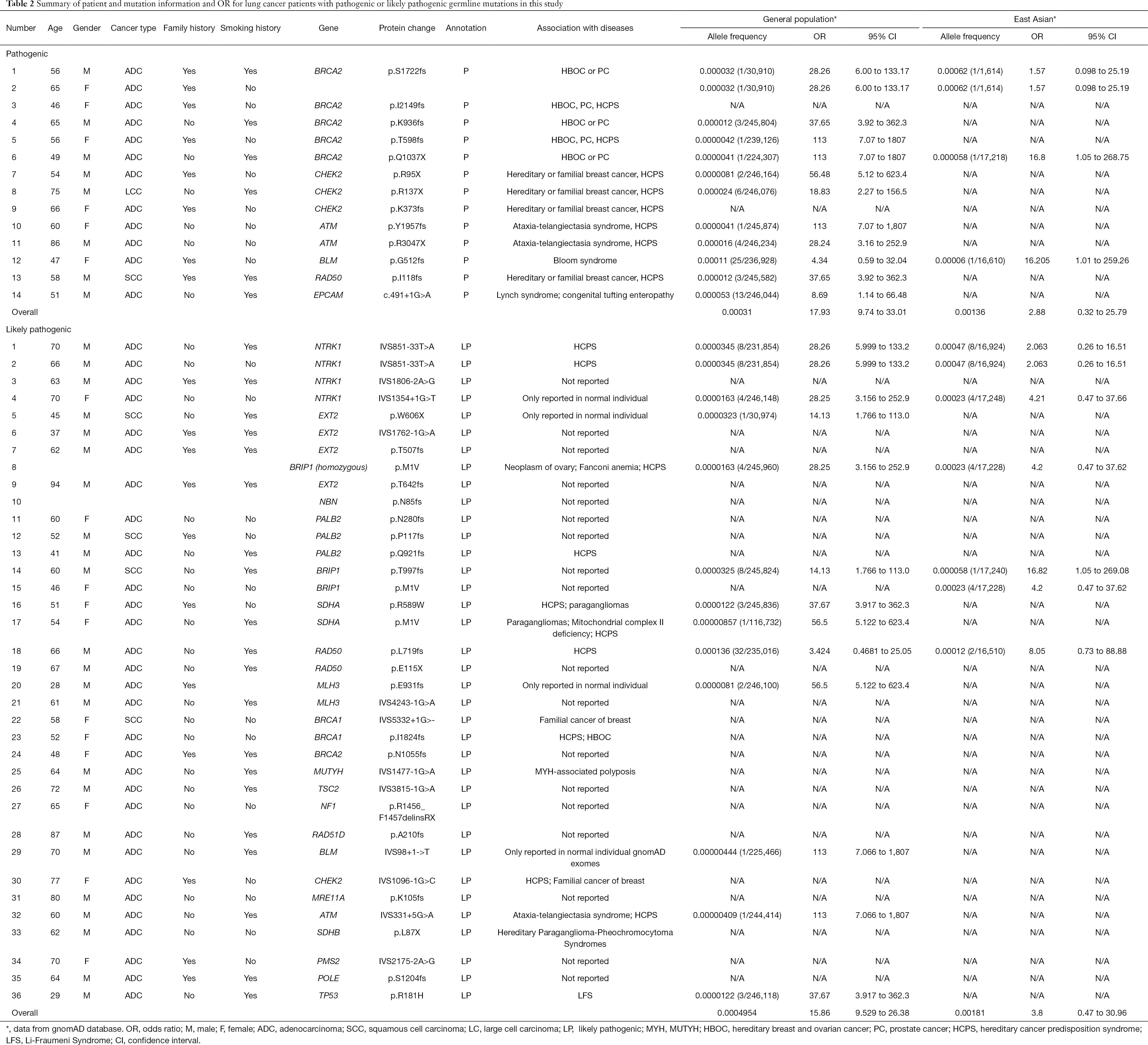 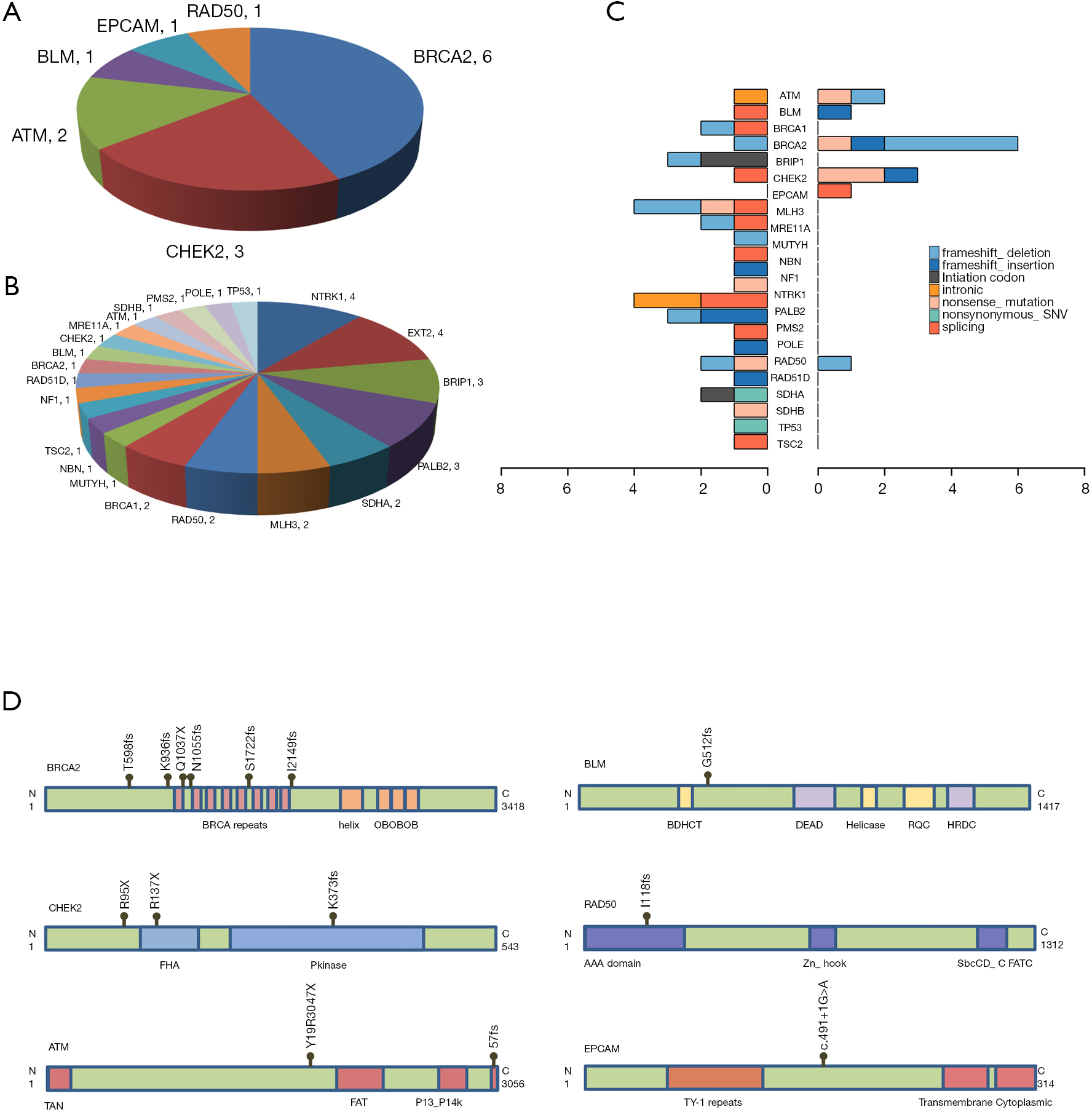 Figure S2 Full CNV somatic mutation spectrum for patients with pathogenic (A), likely pathogenic (B) or non-pathogenic (C) germline mutations. Gene names with CNVs are shown to the right of the figures. Each column represents one patient, and the corresponding germline mutations are labeled beneath the figures. Colors represent the copy number for each gene, which is visualized based on the calculation of log2ratio-1. Only those patients with CNVs are shown in this figure. CNV, copy number variation. 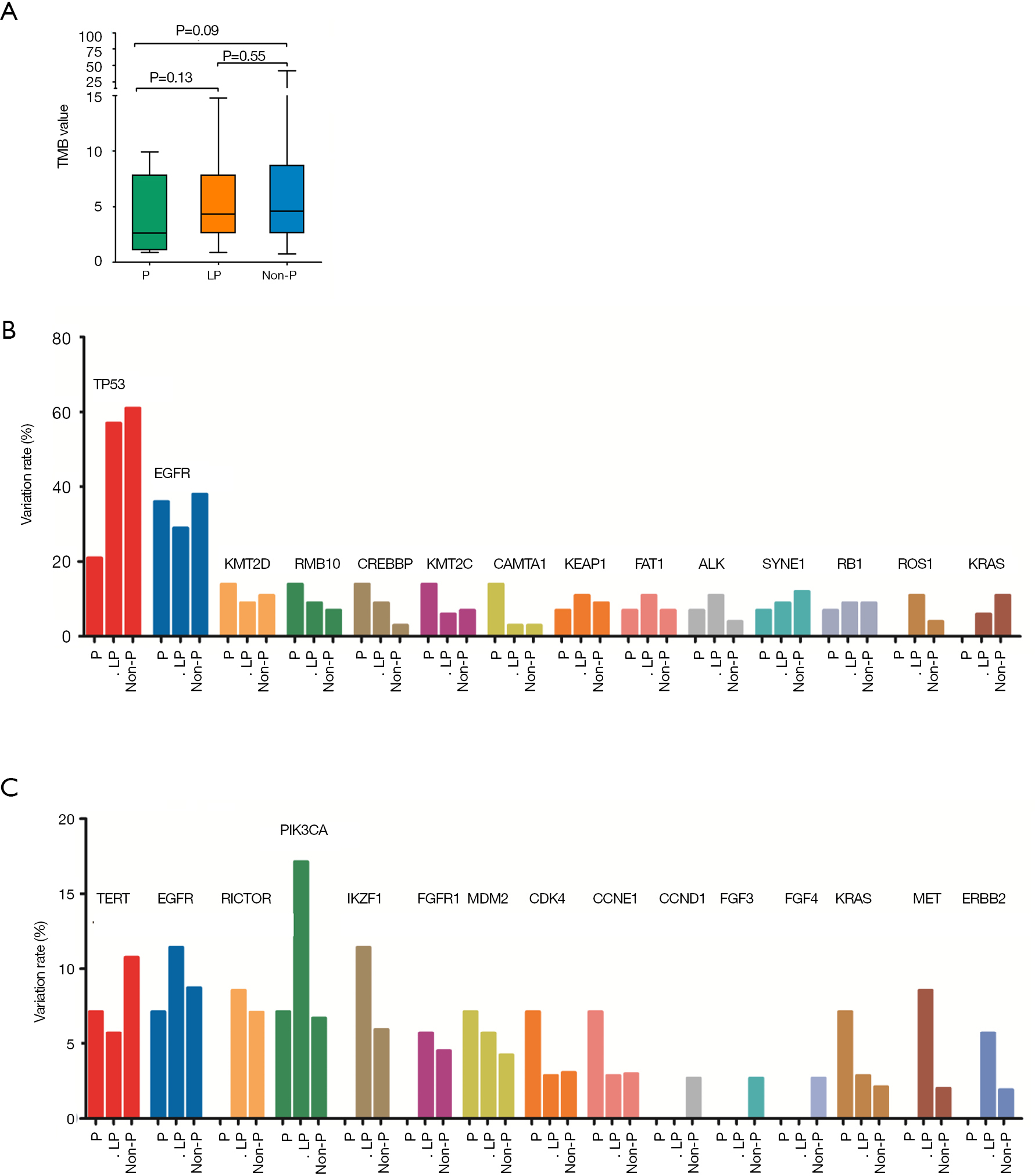 Funding: This study was supported by the Special Funds for Strategic Emerging Industry Development of Shenzhen (grant number 20170922151538732), and the Science and Technology Project of Shenzhen (grant number JSGG20180703164202084). All funders did not participate in the study design, study implementation, data collection, data analysis, data interpretation and manuscript writing of the study.

Conflicts of Interest: All authors have completed the ICMJE uniform disclosure form (available at http://dx.doi.org/10.21037/tlcr-19-403). Mengyuan L, XL, PS, TH, YZ, Ming L, LL, Yaru C, YZ, GL, JY and SC report non-financial support from HaploX Biotechnology outside the submitted work. LS reports grants from The Special Funds for Strategic Emerging Industry Development of Shenzhen and The Science and Technology Project of Shenzhen, non-financial support and other from HaploX Biotechnology Co., Ltd. outside the submitted work. The other authors have no conflicts of interest to declare.

Ethical Statement: The authors are accountable for all aspects of the work in ensuring that questions related to the accuracy or integrity of any part of the work are appropriately investigated and resolved. The study was conducted in accordance with the Declaration of Helsinki (as revised in 2013). The study was approved by the ethics board of the Chinese PLA General Hospital (approval number: S2018-081-02) and individual consent for this retrospective analysis was waived.