Immunotherapy is one of the most effective treatment methods for patients with advanced lung cancer. Several clinical studies have focused on neoadjuvant immunotherapy prior to tumor resection for advanced non-small cell lung cancer (NSCLC). It has been reported that neoadjuvant anti-programmed death-1 (PD-1) immunotherapy does not delay surgery and achieves a major pathological response in 83% of patients who undergo tumor resection (1,2). Many cases of advanced NSCLC are centrally located. Compared with pneumonectomy, sleeve lobectomy has been considered as a more effective therapeutic option for patients with central NSCLC, with better long-term survival and quality of life without increasing the morbidity and mortality. To date, there has been no report regarding the efficacy and safety of neo-adjuvant chemo-immunotherapy prior to sleeve lobectomy for lung cancer. Herein, we evaluated the feasibility and safety of using neoadjuvant chemotherapy combined with PD-1 treatment before sleeve lobectomy to treat NSCLC patients.

We present the following article in accordance with the STROBE reporting checklist (available at http://dx.doi.org/10.21037/tlcr-20-539).

The study was conducted in accordance with the Declaration of Helsinki and approved by the TJMUCH Institutional Review Board, and informed consent was obtained from all participants.

Between January and August in 2019, nine patients who were diagnosed with NSCLC were evaluated to undergo sleeve lobectomy surgery (SLS). The patients were divided into two groups: four of the patients received neo-adjuvant chemo-immunotherapy followed by sleeve lobectomy [the pembrolizumab plus paclitaxel and cisplatin (PPC) group]; and five of the patients underwent SLS alone (the SLS group). The PPC group were given pembrolizumab (100 mg), paclitaxel (135 mg/m2) and cisplatin (75 mg/m2) every 3 weeks for 2 cycles before the surgery. SLS was performed on each patient by the same surgical team. A two-tailed Student’s t-test was used to determine p values between two groups. All the statistical analyses were done with GraphPad Prism 6 (GraphPad Software, La Jolla, CA, USA). A probability value of P less than 0.05 was considered statistically significant.

The patients in the PPC group experienced no grade 3 or 4 treatment-related adverse events. No immune-related adverse events were reported to be associated with the administration of pembrolizumab. In addition, no treatment-related surgical delays were encountered in the PPC group. The median interval between the administration of the second dose of pembrolizumab and SLS was 30.33 days (range, 27 to 33 days). The median follow-up was 6 months (range, 3 to 9 months). None of the patients died or suffered disease recurrence in either group during follow-up (Table 1).

Table 1 Demographic and clinical characteristics of the patients
Full table 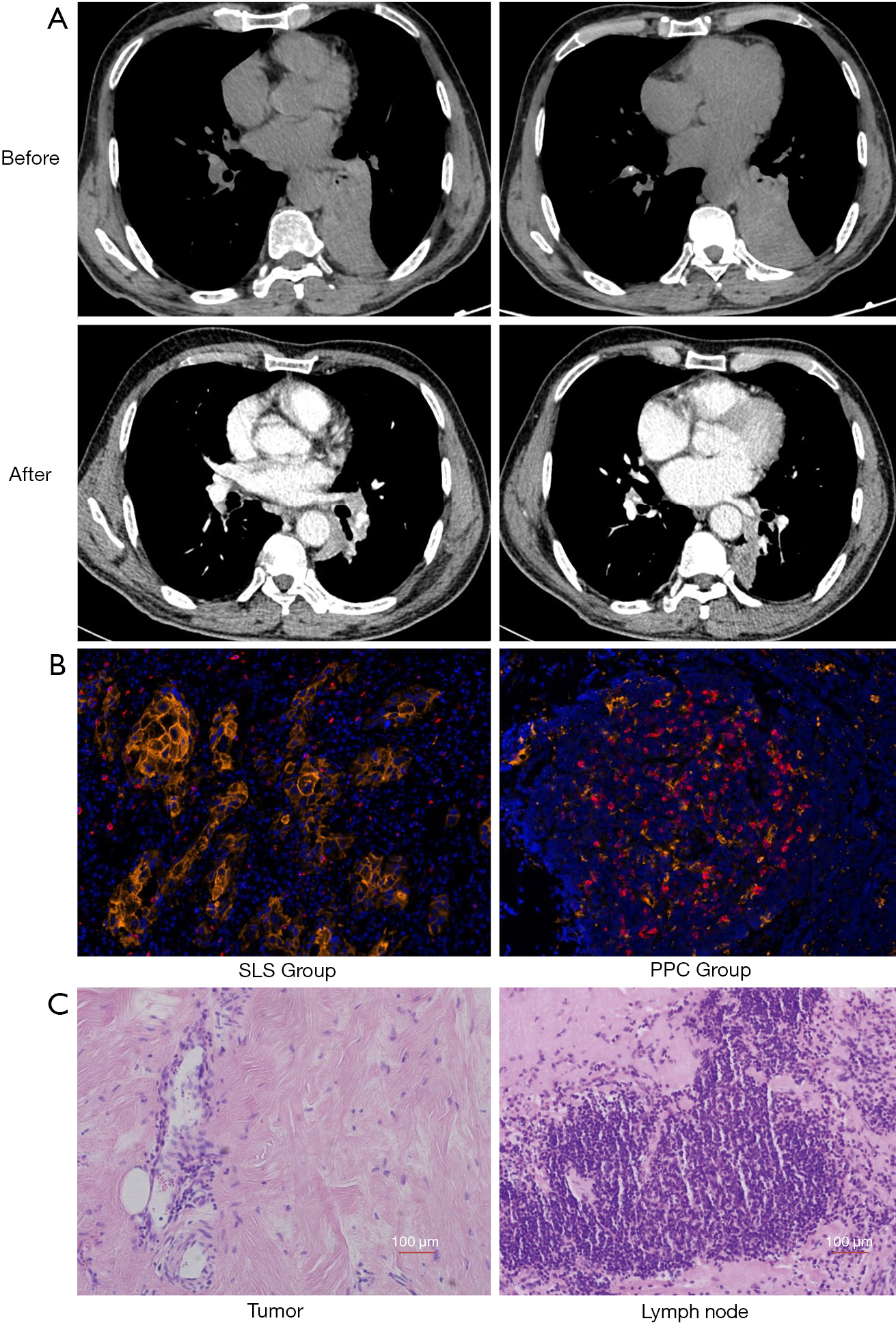 We observed large numbers of infiltrating lymphocytes and macrophages in primary tumors that had a complete or major pathological response, which was consistent with immunological response. Tumor necrosis was associated with fibrotic tissue repair (Figure 1C).

As the immune system may influence bronchial mucosa wounding healing, multiplex fluorescent immunohistochemistry was performed to determine the number of macrophages, CD4+ and CD8 T cells, and Treg cells in the bronchial mucosa. The mean percentages of macrophages (6.96% vs. 5.08%), CD4 T cells (4.72% vs. 10.29%) and CD8+ T cells (7.71% vs. 17.72%), and Treg cells (0.13% vs. 1.1%) were calculated in the SLC and PPC groups, respectively. The number of CD8+ T cells were higher in the PPC group than in the SLS group (P<0.05). There were no significant differences in the number of CD4 T cells, macrophages, or Treg cells between the two groups (P>0.05) (Figure 2). 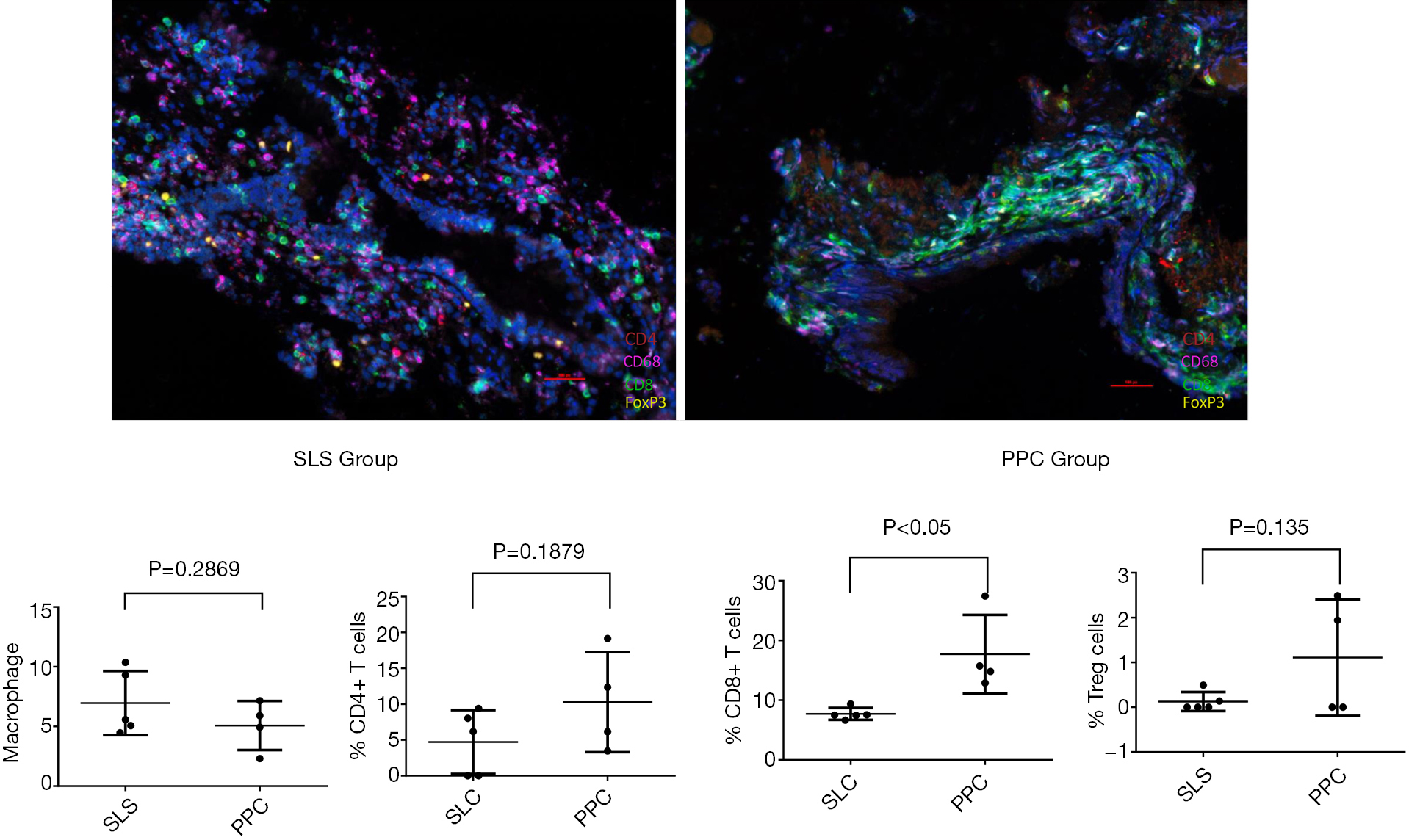 Lung cancer is the leading cause of cancer-related mortality worldwide. The development of cancer immunotherapy has been focused on various ligands and receptors that inhibit or stimulate the immune system, with immune checkpoint inhibitors, including agents that target the anti-PD-1 or PD-L1 molecules, receiving the most attention to date (3-5). Several clinical studies have focused on neoadjuvant immunotherapy prior to tumor resection in advanced lung cancer. It has been reported that neoadjuvant anti-PD-1 immunotherapy does not delay surgery and achieves a major pathological response in 83% of resected tumors. The NADIM study (a neo-adjuvant immunotherapy clinical study, NCT number 03081689) that was published by the American Society of Clinical Oncology in 2019, reported an MPR rate of 85.36% (2). The high MPR and pCR rates were unprecedented and presented a promising future treatment strategy, although it was unknown as to whether MPR and pCR rates could eventually prolong OS and PFS. Neo-adjuvant chemo-immunotherapy was a very effective treatment that had not been previously observed. The NADIM study reported that 13% of the patients encountered G3–5 TRAEs, and the most common postsurgical complication was respiratory infections. In our study, none of the patients encountered G3–5 TRAEs, and none of the patients experienced postsurgical complications, including respiratory infections. Because of financial costs, a 100 mg IV dose of pembrolizumab was administered over 30 minutes every 3 weeks; this was lower than the recommended dose. Our results demonstrated that this lower dose was also very effective and reduced post-surgical complications.

Sleeve lobectomy has been considered a more suitable therapeutic option for central NSCLC compared with pneumonectomy, with better long-term survival and quality of life and no increase in morbidity or mortality (6,7). To our knowledge, there has been no report regarding the efficacy and safety of neo-adjuvant chemo-immunotherapy prior to sleeve lobectomy for patients with lung cancer. Based on our experience, neo-adjuvant chemo-immunotherapy can induce tissue adhesion, which increases the difficulty of the surgery. However, it can also shrink the tumor, consequently making the surgery easier to perform. We observed that the mean surgical duration was similar between the PPC and SLS groups. We believe that sufficiently separating the tissue along the pulmonary artery, vein, and trachea is extremely important in reducing surgical difficulty and the risk of bleeding. Most anastomotic complications result from disruption of the blood supply, and it is therefore fundamental for the surgeon to have an optimal knowledge of the bronchial blood supply. Another cause of potential complications is anastomotic tension. To avoid this, the distal lobe must adequately mobilized. Interrupted or continuous suture makes no significant difference to the outcome.

PD-1 regulates T-cell activation by binding to its ligands, PD-L1 and programmed death-ligand 2 (PD-L2). PD-1 binding inhibits T-cell proliferation, and interferon-γ (IFN-γ), tumor necrosis factor-α, and IL-2 production, and reduces T-cell survival (8). If a T cell experiences coincident TCR and PD-1 binding, PD-generated signals prevent phosphorylation of key TCR signaling intermediates, terminating early TCR signaling and reducing T-cell activation (9,10). PD-1 expression is a hallmark of “exhausted” T cells that have experienced high levels of stimulation or reduced CD4+ T-cell help (11). Goldberg MV found that PD-1 blockade enhanced the early stages of T-cell activation in lymph nodes (12). Liu reported that neoadjuvant PD-1 blockade could enhance the systemic priming of antitumor T cells, thereby potentially eliminating micrometastatic cancer that might otherwise cause postsurgical relapse (13). Salmon H also found the importance of dendritic cells to the antitumor effects of PD-1 pathway blockade, which suggested that PD-1 blockade not only worked to directly unleash intratumoral T-cell killing but also enhanced tumor antigen–driven priming of T cells (14). In our study, the number of CD8 + T cells of the bronchial stump were higher in the PPC group than in the SLS group (P<0.01), while the levels of macrophages, CD4+ T cells, and Treg cells were similar in both groups. The PD-1 blockade could increase the CD8 + T in the bronchial stump; therefore, it may have no influence on bronchial healing.

The surgical difficulty and post-surgery complication rate of sleeve lobectomies after neo-adjuvant chemo-immunotherapy were similar to those of SLS alone. The use of neo-adjuvant chemo-immunotherapy prior to sleeve lobectomy is effective and safe for NSCLC patients. Additional prospective, multicenter, randomized studies using larger patient cohorts are needed to validate our findings.

We thank Professor Bingsheng Sun from Tianjin Medical University for providing suggestions for data extraction and analysis in the experiments.

Reporting Checklist: The authors have completed the STROBE reporting checklist. Available at http://dx.doi.org/10.21037/tlcr-20-539

Conflicts of Interest: All authors have completed the ICMJE uniform disclosure form (available at http://dx.doi.org/10.21037/tlcr-20-539). The authors have no conflicts of interest to declare.

Ethical Statement: The authors are accountable for all aspects of the work in ensuring that questions related to the accuracy or integrity of any part of the work are appropriately investigated and resolved. The study was conducted in accordance with the Declaration of Helsinki and approved by the TJMUCH Institutional Review Board, and informed consent was obtained from all participants.