Malignant pleural mesothelioma (MPM) is an aggressive cancer, arising from mesothelial cells. The overall life expectancy for patients diagnosed with MPM is less than 8–15 months, and platinum and pemetrexed chemotherapy remain the standard of care (1-3). MPM can be categorized into three major subtypes based on hiWstology—epithelioid (60% of cases), sarcomatoid (20%) and biphasic (20%). Of the subtypes, sarcomatoid has the worst prognosis with a median progression free survival (mPFS) of 4 months, despite chemotherapy (4,5).

The efficacy of immune checkpoint inhibitors (ICIs) in MPM is difficult to predict both across and within subtypes. Enhanced expression of the checkpoint protein programmed death ligand 1 (PD-L1) has been reported to correlate with poor survival in MPM (6), however it is yet to be demonstrated as a valid predictive marker of response to PD-1-based ICI. Data in multiple cancers including melanoma has demonstrated that elevated T lymphocyte infiltration and memory status in the tumor microenvironment (TME) is a predictor of patient response to ICI (7,8) and an indicator of an immune primed TME responsive to checkpoint blockade. The association of specific tumor infiltrating lymphocytes (TILs) and response to immunotherapy in specific MPM subtypes has not been assessed. In this small cohort study, we sought to examine the potential of specific TILs, including CD8+ T cells and CD45RO+ memory cells, as predictors of response to immunotherapy, and how such responses vary across MPM subtypes. This study supports larger immune-biomarker guided trials into single and combination checkpoint therapies in sarcomatoid MPM and investigations into the value or detriment of first-line chemotherapy.

We retrospectively reviewed patients with MPM who underwent pre-treatment biopsies between 2012–2017 at Monash Hospital and the Austin Hospital. All patients that received ICIs and had available FFPE tissue with associated follow up data were included in this retrospective study (Table S1). Ethics was approved by Monash Human Resources Ethics Committee (HREC/150542A) and Austin Health Human Resources Ethics Committee (HREC/14/Austin/425).

Prior to paraffin embedding and sectioning, all tissues were fixed in 10% neutral buffered formalin. TILs were characterized using CD4, CD8, CD45RO, FOXP3 and PanCK using the Opal 7-colour TIL kit according to the manufacturer’s protocol (OP7TL3001KT; PerkinElmer). Primary and secondary antibody concentrations were used as per previously published protocol (9). After all rounds of staining, tissues were counterstained with DAPI (PerkinElmer) and mounted in Vectashield hard set mounting medium (Vector). Whole slide scans and multispectral imaging of sections was undertaken using the VECTRA 3.0 (PerkinElmer) using a 20x objective. Image analysis and phenotyping was undertaken using the inForm® software (PerkinElmer) as previously outlined (9).

Characteristics associated with prolonged PFS and OS survival post-immunotherapy were lack of prior chemotherapy and a partial response based on imaging. Baseline clinicopathological characteristics are summarized in Table S1. In this small retrospective study, we observed an overall response rate (ORR) to ICIs of over 30% and a mPFS and mOS of 3.8 and 11.1 months respectively (Tables S1,S2). 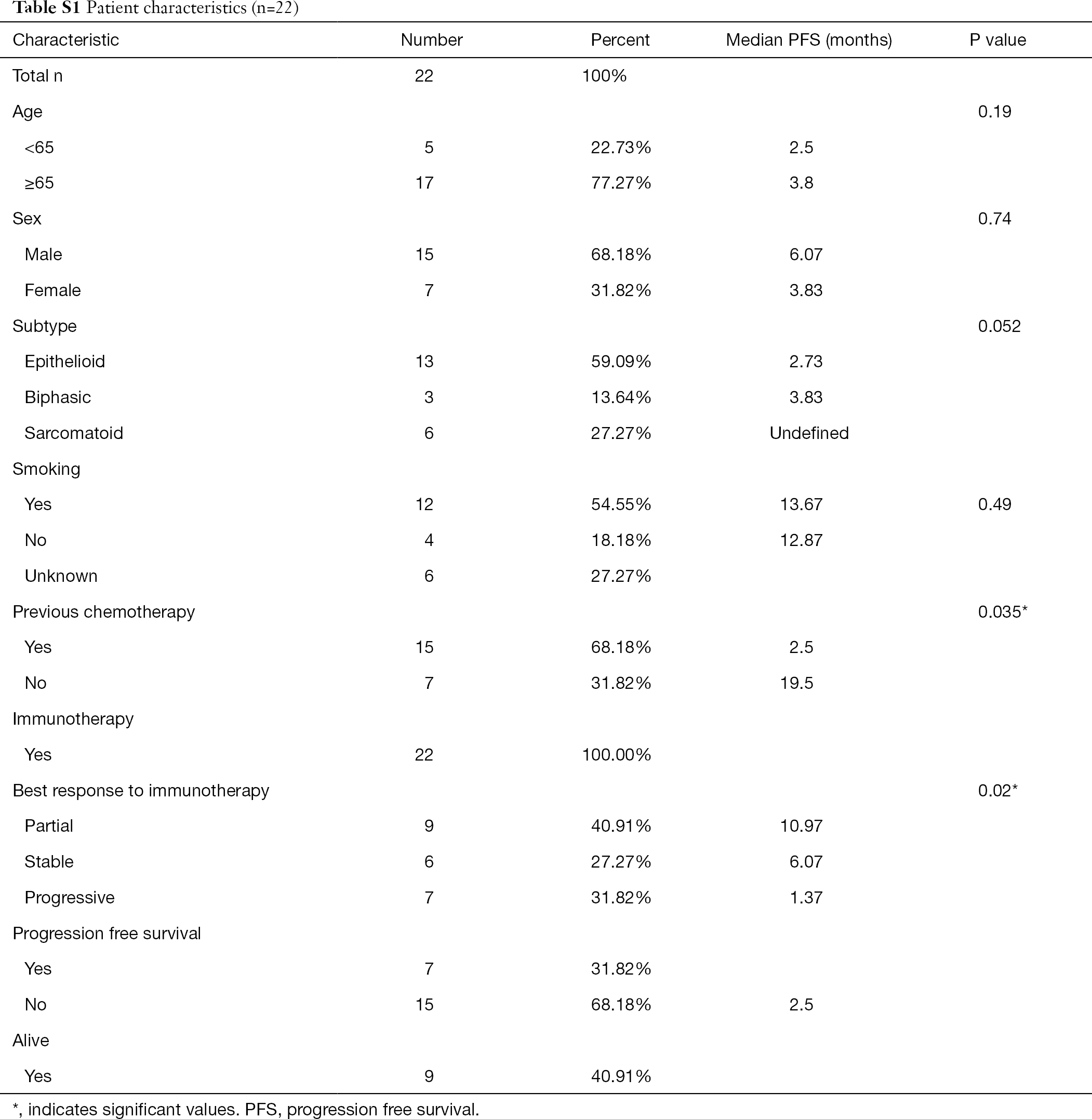 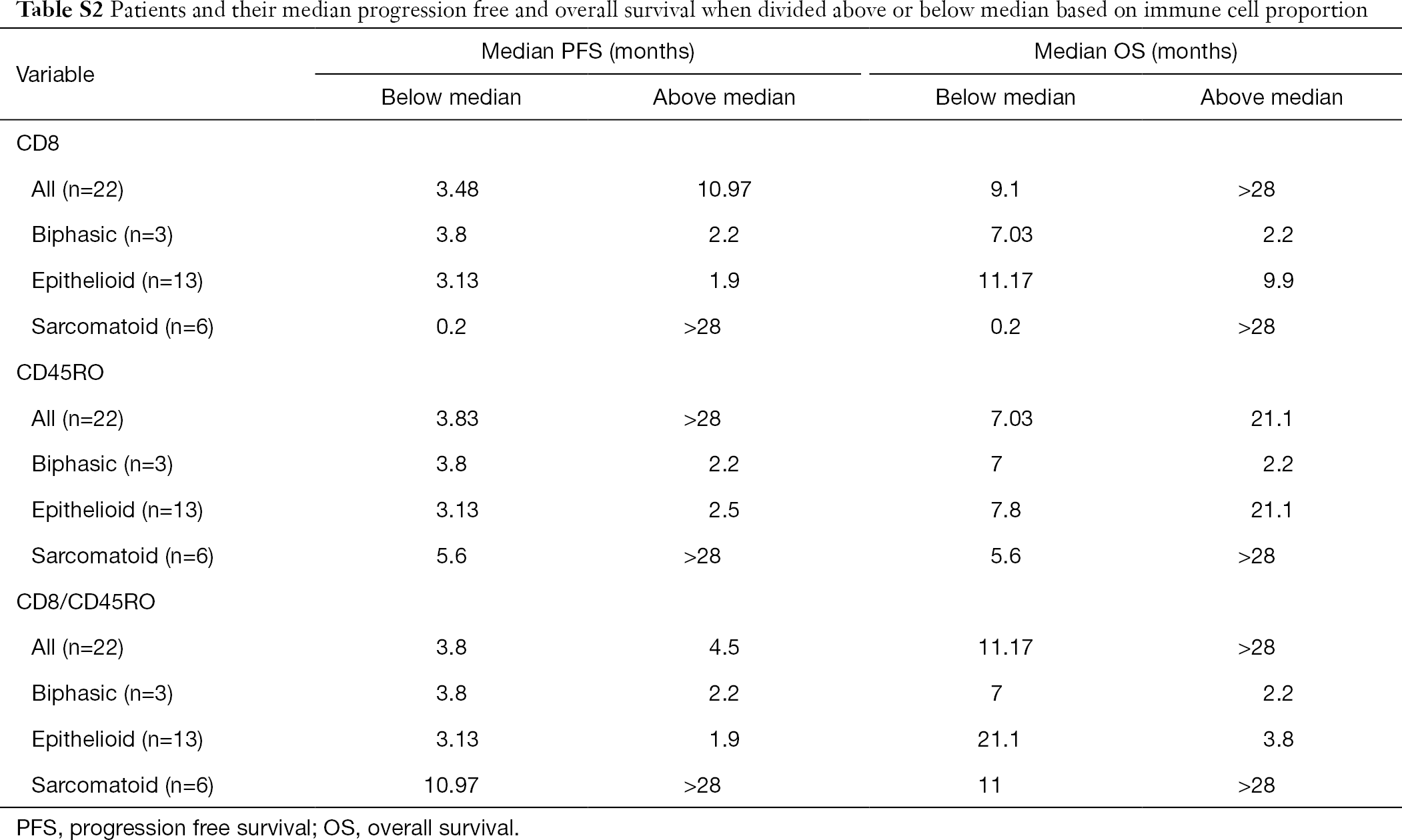 We first compared the immune landscape at baseline between MPM subtypes. The sarcomatoid subtype displayed higher proportions of tumor-infiltrating T cells than biphasic and epithelioid subtypes (Figure 1A,B). It was also noted that the epithelioid and biphasic subtypes had a larger proportion of cells that were not CK+, CD8+ or CD4+, suggestive of other stromal or immune cell infiltrates. The proportion of CD8+ T cells and CD8+ CD45RO+ infiltrates were up to 2 times higher in the sarcomatoid subtype than the epithelioid subtype (Figure 1C,D,E). These populations have previously been associated with improved outcomes in other cancers (9). 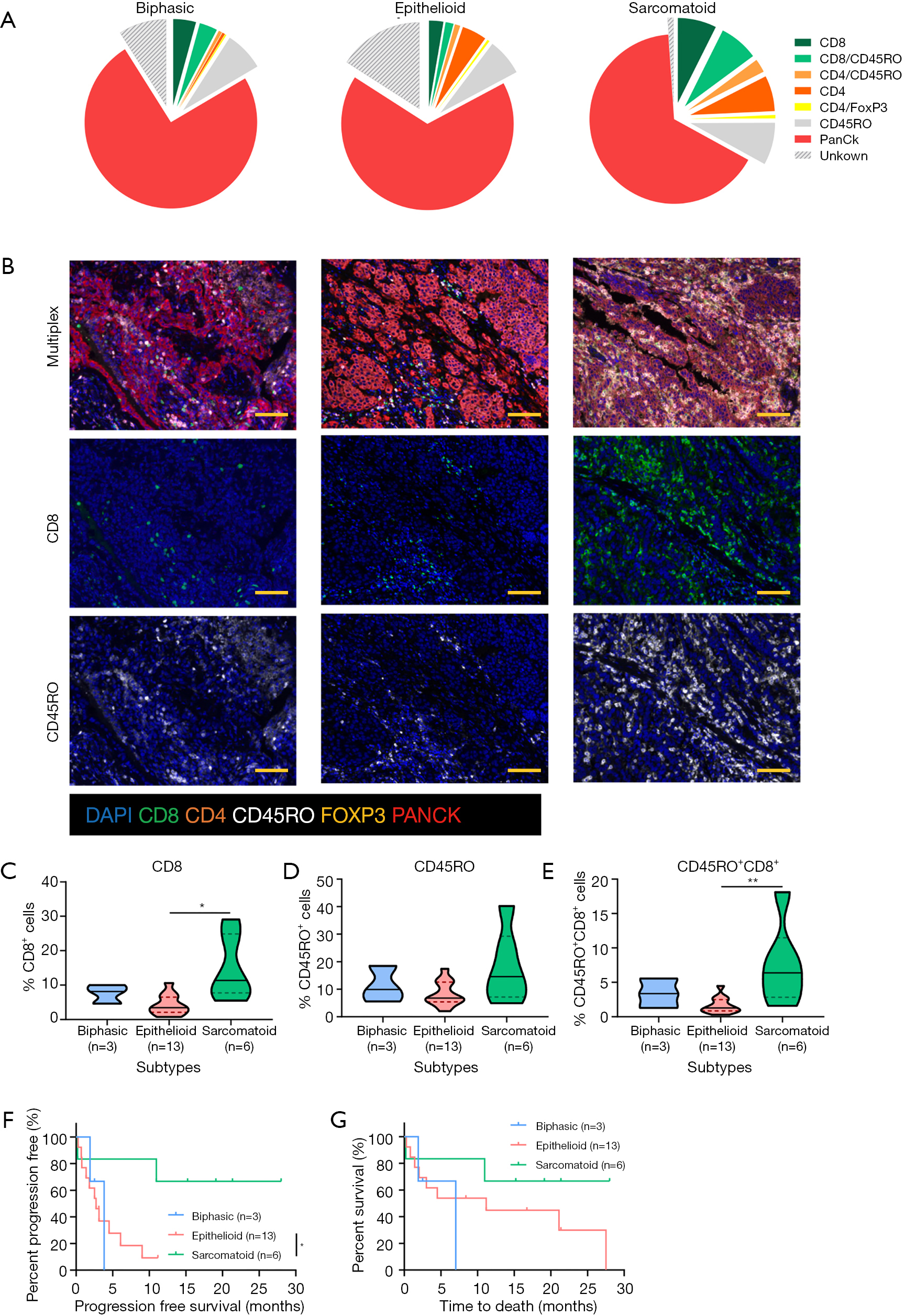 In this cohort, patients with sarcomatoid MPM displayed prolonged PFS and OS post ICI treatment compared to the epithelioid subtype (Figure 1F,G). This was a surprising finding given historical literature on sarcomatoid outcomes. Patients with sarcomatoid tumors heavily infiltrated with lymphocytes (above the median) achieved prolonged PFS and OS times more than double that of patients with low proportions of TILs (>28 and 11 months respectively) (Table S2). In the epithelioid and biphasic subtypes there was no difference in PFS or OS when patients were stratified to groups above or below median immune cell proportions (Table S2). Importantly sarcomatoid patients with CD8+ and CD45RO+ infiltrates above the median had PFS and OS >28 months, a vast improvement from historical chemotherapy mPFS. In fact, when PFS and OS post-ICI therapy was assessed it was clearly seen that four (67%) sarcomatoid patients were progression free and alive for over 15 months (Figure 2A). This is in contrast to the epithelioid patients where only 2 (15%) were progression free at 10 months, as indicated on the swimmers plot (Figure 2A). Analysis of the immune landscape of sarcomatoid tumors that remained PF and alive were heavily immune infiltrated tumors (Figure 2B), supporting further studies into the predictive strength of immune populations. The specific ICI that each patient received is shown in Figure 2 and highlights the disparity in ICIs administered in mesothelioma. Overall, it is clearly seen that in this specific cohort, sarcomatoid patients were exceptional responders to ICIs, particularly those treated with combination nivolumab/ipilimumab. 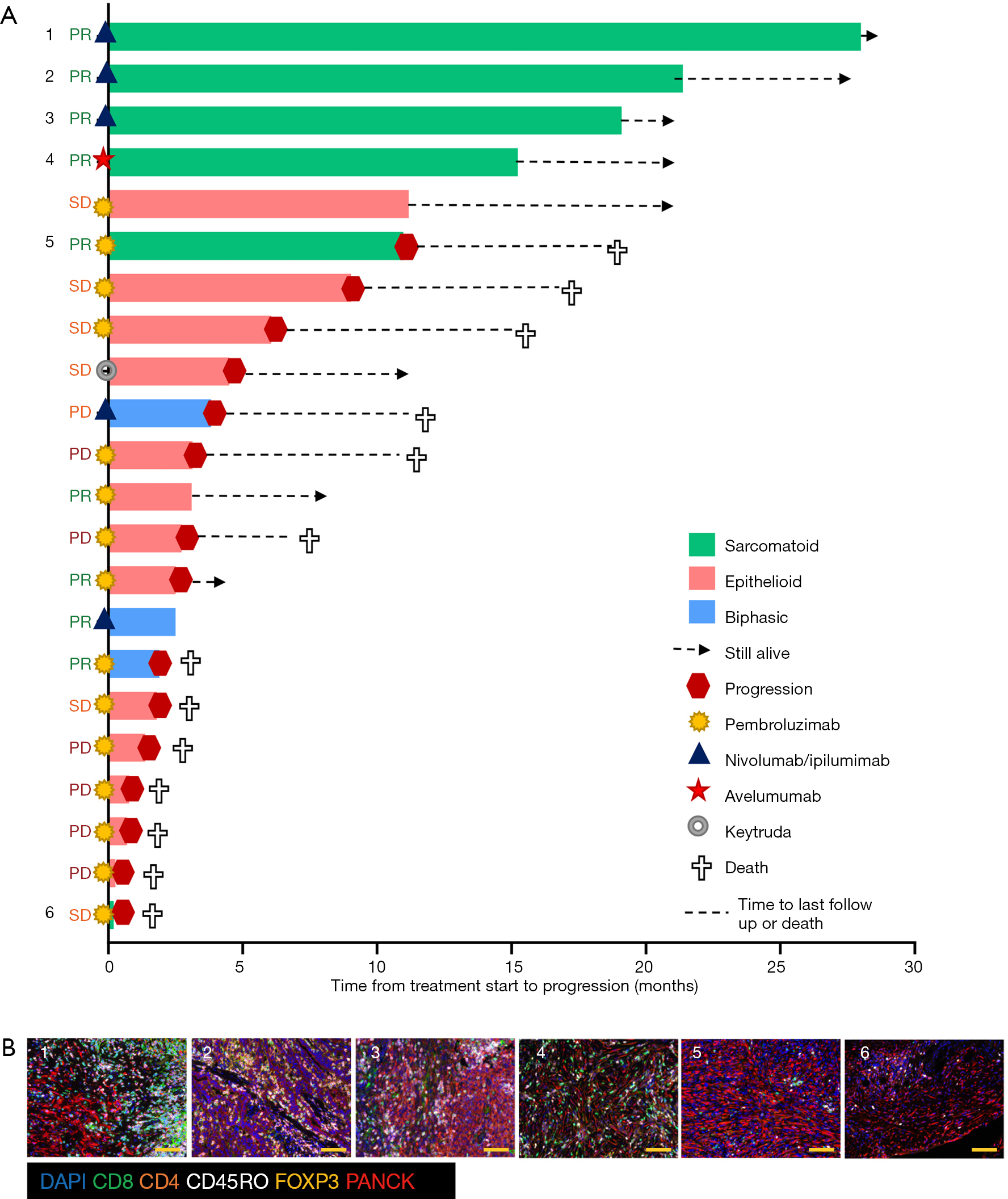 In this small cohort study, patients with sarcomatoid MPM had prolonged survival post-ICI. Immune phenotyping revealed that this subtype had elevated infiltrates, the extent of which was linked to improved outcomes. Importantly, this finding was specific to the sarcomatoid subtype as high proportions of immune infiltrates was not associated with improved mPFS and mOS in epithelioid and biphasic MPM.

Historically, patients with sarcomatoid MPM have a poorer survival than the epithelioid subtype and are known to be less responsive to chemotherapy, with a mPFS of 4 months (4,5). The dramatic PFS and OS survival shift in sarcomatoid MPM patients treated with ICIs (particularly as first-line therapy) in this study to over 28 months suggests that immunotherapy may be a potent stand-alone first-line therapy for this chemotherapy-resistant subtype. Our study supports larger sarcomatoid-specific trials to determine the extent of patient response to single and double agent immunotherapy. The utility of immune-based markers as predictors of immunotherapeutic sensitivity should also be explored in ICI clinical trials going forward. Importantly, patients who received prior chemotherapy on which they had progressed had shorter PFS intervals than where ICI was first-line suggesting that disparities in response to ICIs are likely to occur based on prior patient treatment.

Our study supports memory T cells as predictors of response to checkpoint-based therapy, which is in line with other solid malignancies (10). The small number of available biopsies derived from patients treated with ICI made development of predictive immune markers for single-agent or combination immunotherapy comparisons difficult. Furthermore, the disparity in ICIs used in patients made definitive conclusions difficult and is a weakness of this study. It cannot be ascertained from this study whether sarcomatoid patients would do just as well on single agent ICIs rather than the combination approaches. Further studies that enable development of markers that specifically predict benefit of anti-PD-L1/PD-1 or CTLA4 inhibitors alone or in combination are important to balance the benefit to risk ratio of their use at an individual patient level. Currently majority of clinical trials utilizing ICIs in MPM exclude sarcomatoid patients due to their historically poor outcomes. The data herein suggests that sarcomatoid MPM patients should be a focus of ICI clinical trials going forward.

Our findings suggest ICI is a potent first-line therapy for the sarcomatoid subtype and that high proportions of memory and T cell populations are candidate predictors of patient benefit in this subtype.

Ethical Statement: The authors are accountable for all aspects of the work in ensuring that questions related to the accuracy or integrity of any part of the work are appropriately investigated and resolved. The study was conducted in accordance with the Declaration of Helsinki (as revised in 2013). Ethics was approved by Monash Human Resources Ethics Committee (HREC/150542A) and Austin Health Human Resources Ethics Committee (HREC/14/Austin/425). Individual consent for this retrospective analysis was waived.