Surgery and stereotactic body radiation therapy (SBRT) are considered as the main treatment options for non-small cell lung cancer (NSCLC), and SBRT in stage I NSCLC has been reported to have a 3-year local control of 92% to 98%, and a 3-year overall survival of 90% (2-4). SBRT has higher biologically effective doses (BED) irradiated during a short period, realizing the higher radiative dose of the tumor, meanwhile minimizing the exposure of the organ at risk, and achieve successful local control of lung cancer. Thus, SBRT is thought to be an optimal treatment modality for patients who have inoperable disease or who refuse operation by virtue of its good local control and low incidence of severe toxicities, with several studies finding SBRT to be an equivalent treatment option for early-stage NSCLC (2,3). This approach can also reduce overall treatment time from several weeks of conventional radiotherapy to a few days, which offering a convenience to the patients. Radiation-induced lung injury (RILI) include radiation-induced pneumonitis and lung fibrosis, and radiation pneumonitis is a predominant complication after radiotherapy while the incidence of severe radiation pneumonitis after SBRT is low (0–29%); however, more than half of patients who are treated with SBRT develop radiographic patterns of RILI (5,6). It is widely known that the CT pattern of early and late benign fibrosis is commonly observed after SBRT for lung cancer, and response evaluation criteria in solid tumor (RECIST)-defined tumor recurrence depends on the variation of lesions size. However, as some radiation-induced modifications arise from inflammation and fibrosis, it usually takes a period of time to evaluate treatment response, which limits the application of RECIST (7,8). Some changes on CT imaging can be associated with a higher risk for tumor recurrence, and these are known as high-risk features (HRFs). Huang et al. summarized the CT radiographic changes on acute and late lung injury after SBRT and the HRF of local recurrences, found the following characteristic patterns: an enlarging opacity of preliminary focus, a bulging margin of opacity, disappearance (including partial disappearance) of the linear edge and air bronchograms, and opacity enlarging in a craniocaudal direction and they noted that the sensitivity and specificity of identification on tumor recurrence reached up to 90% with the simultaneous presence of 2 or more HRFs (9-11).

Herein, we discuss our investigation of the CT appearance pattern of RILI and recurrence after SBRT in patients with early stage NSCLC in order to better identify RILI and local disease failure.

We present the following article in accordance with the STROBE reporting checklist (available at http://dx.doi.org/10.21037/tlcr-20-609).

The study was conducted in accordance with the Declaration of Helsinki. Ethical approval was obtained at institutional review board of Shanghai Pulmonary Hospital for this retrospective study (approval ID: K20-174Y). Informed consent was waived.

We selected 60 patients with early stage NSCLC who received SBRT treatment in Shanghai Pulmonary Hospital and Cancer Hospital affiliated to the University of the Chinese Academy of sciences from February 2012 to June 2018, and retrospectively analyzed their clinical data. The study cohort comprised 44 males and 16 females, and the median age was 76 (range, 52–88) years. The specific information of enrolled patients is shown in Table 1. The median prescription dose was 50 Gy/5 fraction (range, 40–70 Gy/4–10 fraction). All patients had a biologically effective dose (BED10) of ≥100 Gy, and the total dose covered 95% of the planning target volume (PTV).

All patients had undergone serial CT scanning before SBRT and every 3 months for the first half year, every 6 months for the next half year (at 3, 6, 12, 18, and 24 months post-treatment), and then annually after completion of SBRT. The frequency of CT scan increased when relapse was highly suspected, and the relapse was verified with 18F-FDG (positron emission tomography) PET/CT or biopsy. In the present study, all the enrolled patients underwent 18F-FDG PET/CT scanning. A standard uptake value (SUV) greater than 5 or an initial value (as measure by initial 18F-FDG PET/CT scanning) was diagnosed as tumor relapse according to the literature (10,12). In the present study, 7 patients were diagnosed with relapse, and of these patients, 1 patient had the relapse verified by pulmonary fine needle puncture pathology, while 6 patients failed biopsy because of cardiopulmonary dysfunction or old age. In this instance, the diagnostic criteria of relapse were opacity increase on CT scanning after SBRT, SUV measurements by 18F-FDG PET/CT revealed as positive and higher than those before treatment. An experienced radiation oncologist and radiologist who were blinded reviewed all CT images and identified acute or late RILI and HRF.

Statistical analysis was conducted using SPSS 22.0 software (SPSS Inc., Chicago, IL, USA). The chi-squared was used to assess the consistency between the two observers and to compare radiographic changes between the recurrence and non-recurrence groups. P value <0.05 was considered statistically significant.

The acute and late RILI 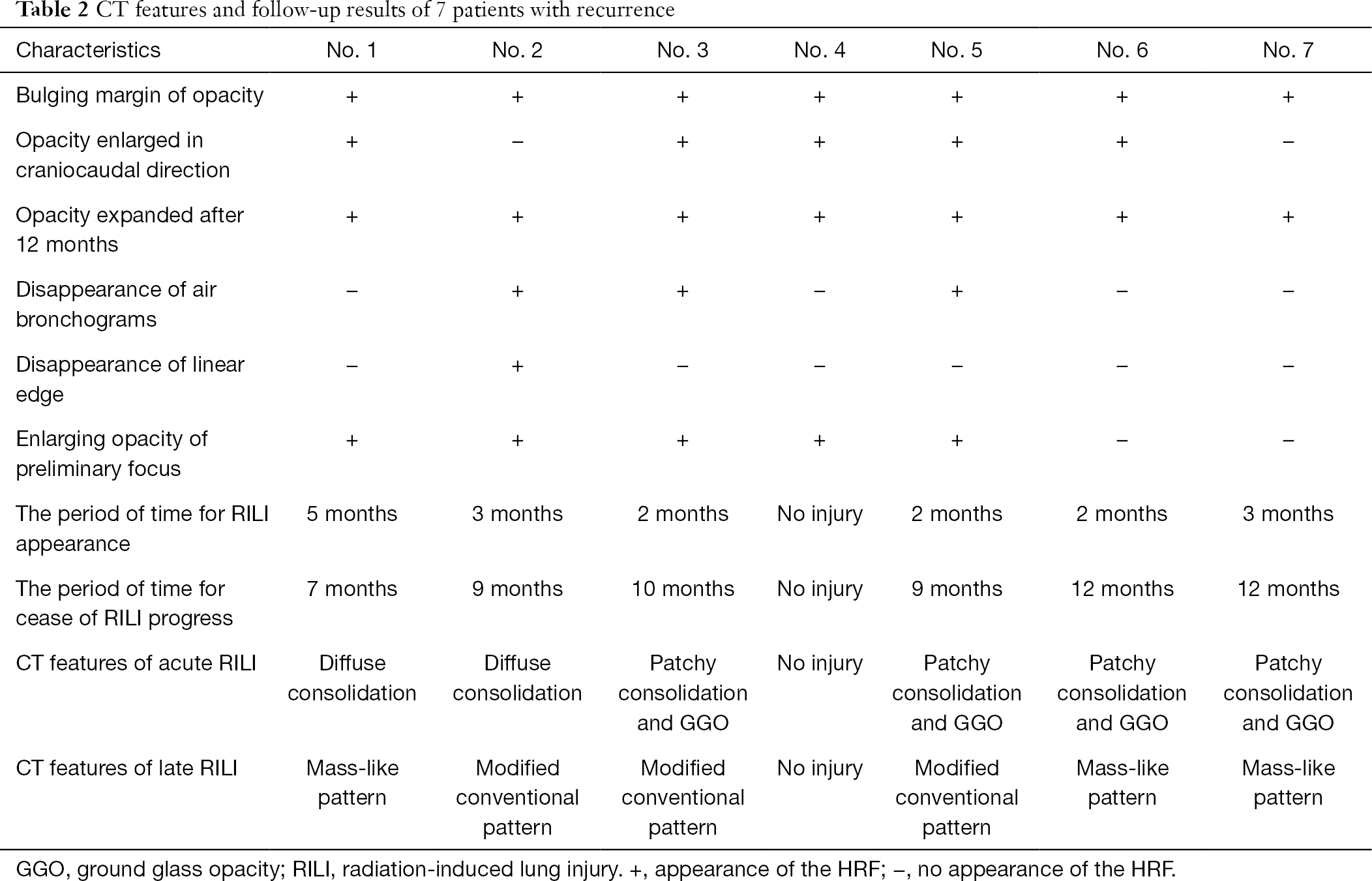 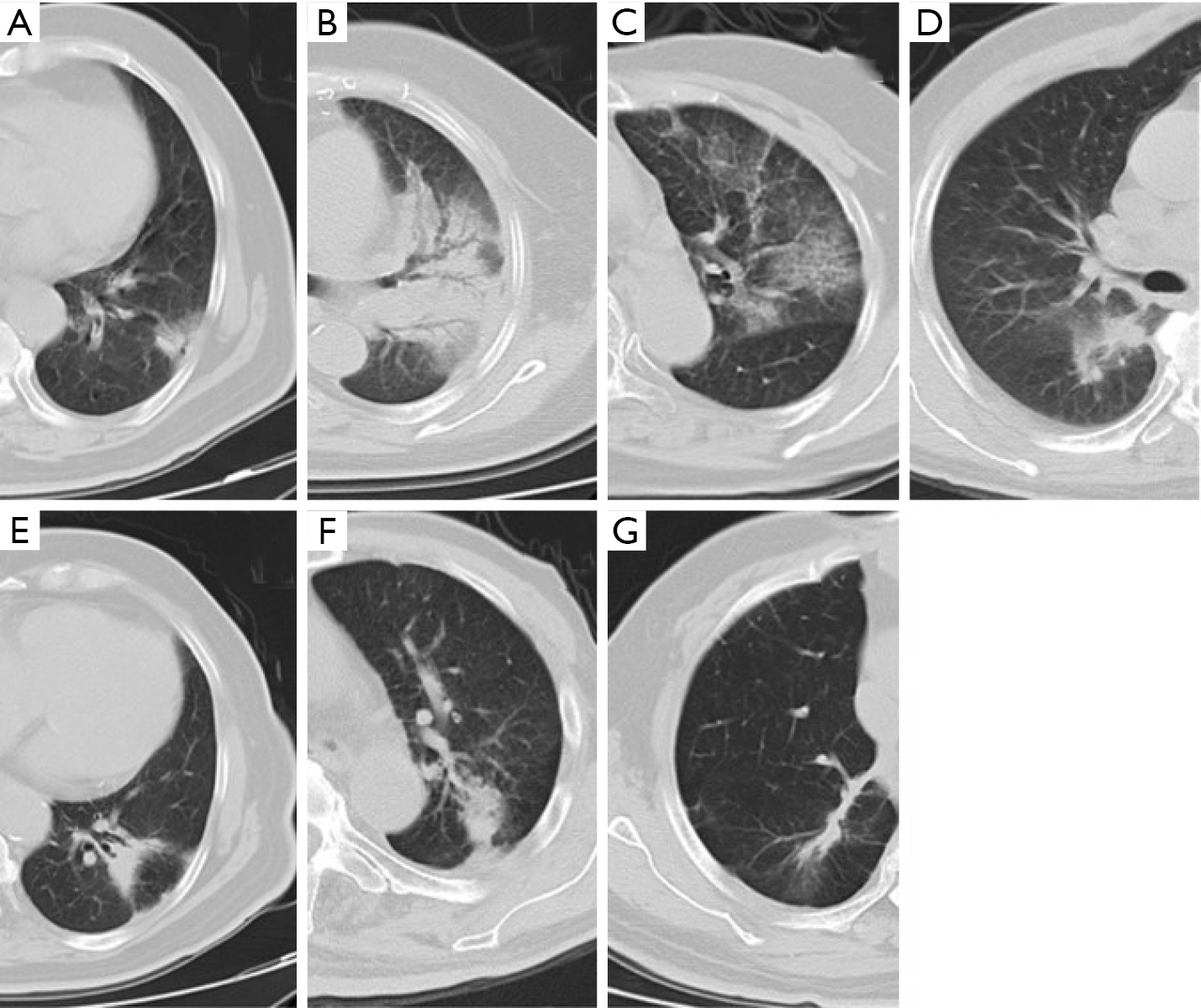 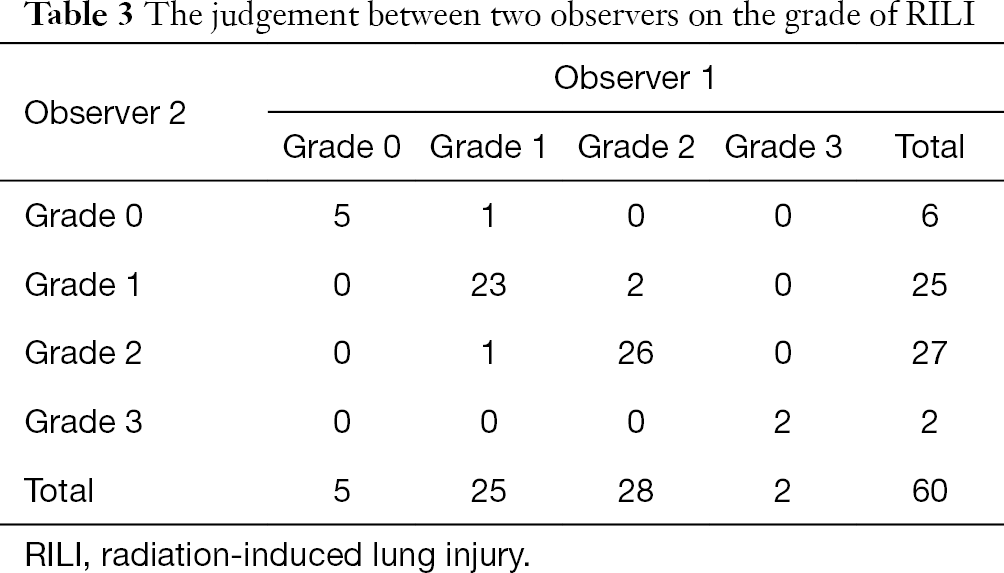 The enlarging opacity of preliminary focus (29, 48.33%) and bulging margin of opacity (19, 31.67%) were the primary HRFs among the CT images of 60 patients. The bulging margin of opacity and the opacity expanding after 12 months had the highest sensitivity (both of 100%), while disappearance of air bronchograms had the highest specificity (100%). There was no statistically significant difference between the disappearance of linear edge and the enlarging opacity of preliminary focus. The odds ratio (OR) value of the disappearance of linear edge was less than 1, and the OR value of the opacity expanding after 12 months reached up to 216.4. The incidence of high-risk features was detailed in Table 6.

The accumulated sensitivity and specificity of HRFs are shown in Table 7. Patients with only 1 HRF showed high sensitivity (100%) and low specificity (52.80%), and the specificity increased with the number of HRFS while the sensitivity decreased. The CT images with diagnosis, follow-up, and relapse of 1 patient are shown in Figure 2. The tumor relapse was confirmed by PET/CT on the 53rd month, and we found 2 HRFs on follow-up CT image, including the opacity expanding after 12 months and the bulging margin of opacity.

Table 7 The accumulated sensitivity and specificity of HRFs
Full table 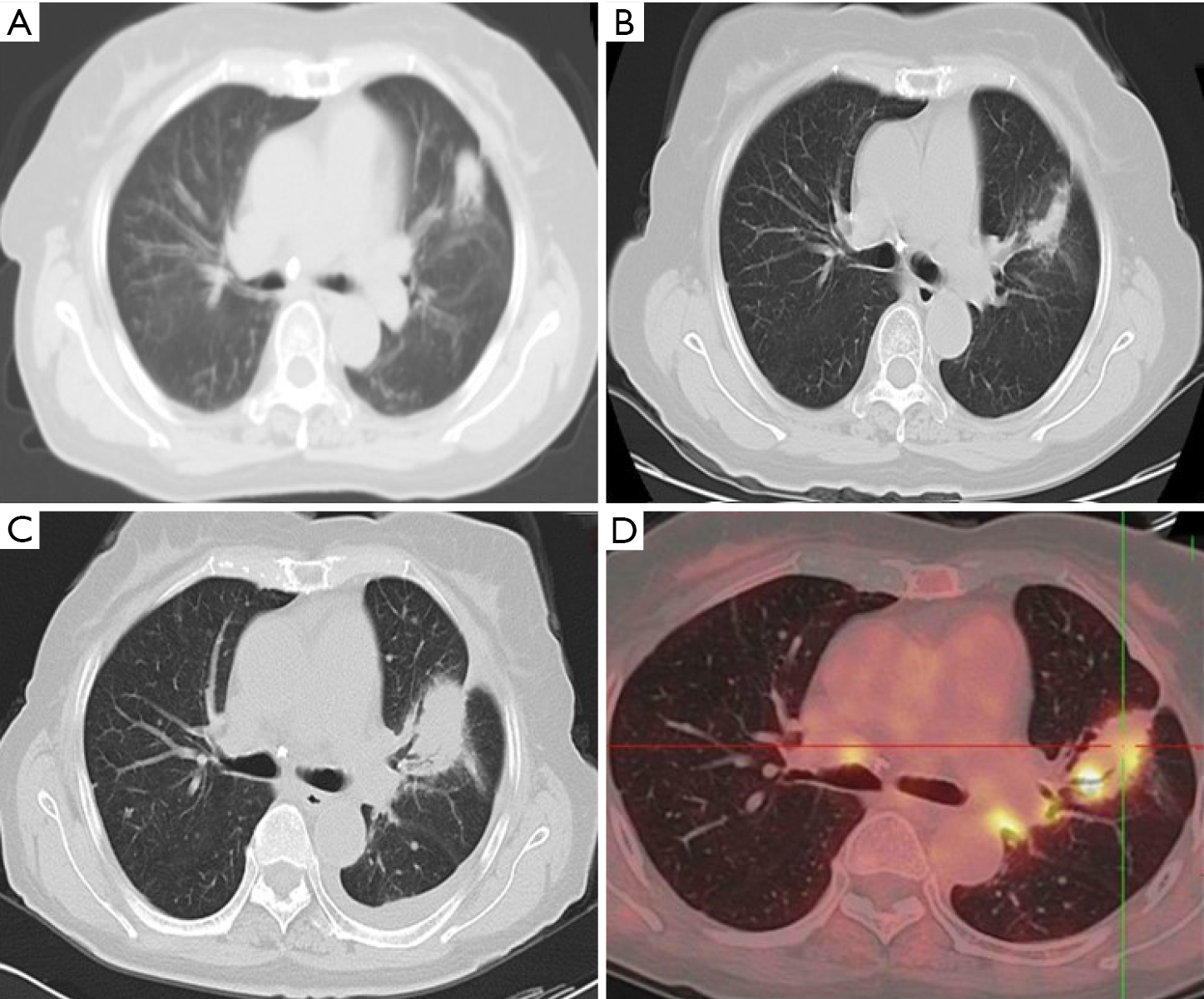 Figure 2 The radiological images of one patient with local recurrence after SBRT. (A) The CT image with tumor diagnosis of a female patient (68 years old) with NSCLC stage IB; (B) a mass-like fibrosis was found on follow-up CT image on the 18th month after SBRT; (C) there were 2 HFRs including the opacity expanding after 12 months and bulging margin of opacity on the 53rd month after SBRT; (D) the PET/CT on the 53rd month after SBRT indicated tumor relapse, with an SUVmax of 13.3. SBRT, stereotactic body radiation therapy; NSCLC, non-small cell lung cancer; HFRs, high-risk features.

We found 1- and 3-year overall survival in the 60 patients were 95.2% and 86.3%. The therapeutic effectiveness SBRT was desirable and the incidence of RILI was 91.67%. The 2 observers had a good agreement on the grade of RILI, and the CT pattern of acute and late RILI. We found that the incidence of severe RILI after SBRT was extremely low, and grade 1 and grade 2 RILI were the primary pulmonary toxicities. Patchy consolidation and GGO was the most common CT pattern on acute RILI, and the modified conventional pattern was mainly found with late RILI. The specificity of relapse tumor increased with the number of HRFS while the sensitivity decreased, which was important for the diagnosis of tumor recurrence.

Huang et al. retrospectively analyzed a total of 88 patients who were treated with SBRT using volumetric-modulated arc therapy, and they found that the most frequently observed HRFs in non-recurrence patients were enlarging opacity (64.8%) and enlarging opacity after 12 months (50.0%) (9). The present study indicated that the enlarging opacity of preliminary focus (48.33%) also had the highest incidence, while there were 7 patients who were diagnosed with tumor recurrence. We also found that opacity expanding after 12 months had the highest OR (216.4) which was the important indicator for recurrence diagnosis. We can thus definitively conclude that enlarging opacity or opacity expanding after 12 months alone cannot be depended on to determine tumor recurrence. In our study, we also found that the specificity increased while the sensitivity decreased as the number of HRFs increased. Therefore, regular follow-up and attention to high-risk HRFs are crucial.

The radiomics approach may detect early changes associated with local recurrence by extracting quantitative features, and these features are not typically considered by physicians (9). Moran et al. (6) found radiomics features significantly correlated with radiation oncologist-scored post-SBRT lung injury and showed a significant dose-response relationship. Thus, radiomics may help us have a better understanding of pulmonary toxicity and tumor relapse and may facilitate the earlier intervention of local recurrences after SABR (6,9). In the future, our group will also use the radiomics method to investigate pulmonary toxicity after SBRT.

In summary, regular follow-up and attention to high-risk HRFs are vital in better identifying RILI and local disease failure.

Reporting Checklist: The authors have completed the STROBE reporting checklist. Available at http://dx.doi.org/10.21037/tlcr-20-609

Conflicts of Interest: All authors have completed the ICMJE uniform disclosure form (available at http://dx.doi.org/10.21037/tlcr-20-609). The authors have no conflicts of interest to declare.

Ethical Statement: The authors are accountable for all aspects of the work in ensuring that questions related to the accuracy or integrity of any part of the work are appropriately investigated and resolved. The study was conducted in accordance with the Declaration of Helsinki. Ethical approval was obtained at institutional review board of Shanghai Pulmonary Hospital for this retrospective study (approval ID: K20-174Y). Informed consent was waived.