Based on National Lung Screening Trial (NLST) results, the US Preventive Services Task Force (USPSTF) recommends lung cancer screening with low-dose computed tomography (LDCT) for current and former heavy smokers ages 55–80 years (1,2). The NLST protocol defined a positive screening finding as a noncalcified nodule measuring 4mm or greater in the longest diameter (3). Using this threshold, false-positive rates in the NLST were 26.6% at baseline and 21.8% after baseline. Concern over these high false-positive rates observed in the NLST led to development of the Lung CT Screening Reporting and Data System (Lung-RADS) by the American College of Radiology (4).

Lung-RADS is currently in use for nodules detected on LDCT for lung cancer screening and was designed to standardize interpretation and reporting by radiologists, provide consistent management recommendations, and facilitate outcome monitoring (4). A retrospective analysis of the NLST data that applied Lung-RADS criteria found a reduction in false-positive rates to 12.8% at baseline and 5.3% after baseline (5); however, there is limited prospective data on the use of Lung-RADS assessment categories in real world clinical settings. Hence, we sought to compare use of Lung-RADS assessments in a real-world screening population versus the retrospective application to the NLST, and to determine if Lung-RADS use differs in academic versus community settings.

Using electronic medical record systems data and abstracted radiology text reports, we ascertained patient characteristics and Lung-RADS assessment categories for each screening exam. Patient characteristics included age, race, sex, and smoking status (current versus former). We dichotomized the radiologist reported Lung-RADS assessment into negative [Lung-RADS 1 (Negative) and Lung-RADS 2 (Benign Appearance or Behavior)] and positive [Lung-RADS 3 (Probably Benign) or 4A, 4B, or 4X (Suspicious)]. We dichotomized into these groups to be comparable to the retrospective analysis of the NLST (5). We classified the NCLSR screening sites as academic (n=2) or community (n=2).

We compared the Lung-RADS distribution for baseline and subsequent screening exams in the NCLSR with those in the retrospective analysis of the NLST (5) using chi-square tests. To adjust for potential differences in patient characteristics across screening sites, we employed a logistic regression to compare the likelihood of positive versus negative screening results in academic versus community sites. We stratified the analysis by baseline versus subsequent screen, and included the following covariates: age, race, sex, and smoking status. Because some patients had more than one subsequent screening exam, we controlled for patient-level correlations by including an R-side compound-symmetric random effect. This study was approved by the University of North Carolina Institutional Review Board (No. 17-2352).

We included 4,037 lung cancer screening exams conducted in 2,861 NCLSR patients. The study population undergoing screening was 51.3% ages less than 65 years, although those screened at academic versus community sites were more likely to be ages 65 and older (59.0% vs. 45.2%, respectively, P value <0.01; Table 1). Among those with a known race (n=2,632), 80.6% were white, 16.9% were black, and 2.5% were another race. Overall, 8.0% of patients had missing race and these patients were from community sites. Compared with community sites, patients screened at academic sites were more likely to be black (25.7% vs. 13.5%, P value <0.01). The study population included 46.9% females and 53.4% current smokers, with no differences seen in academic versus community imaging sites. 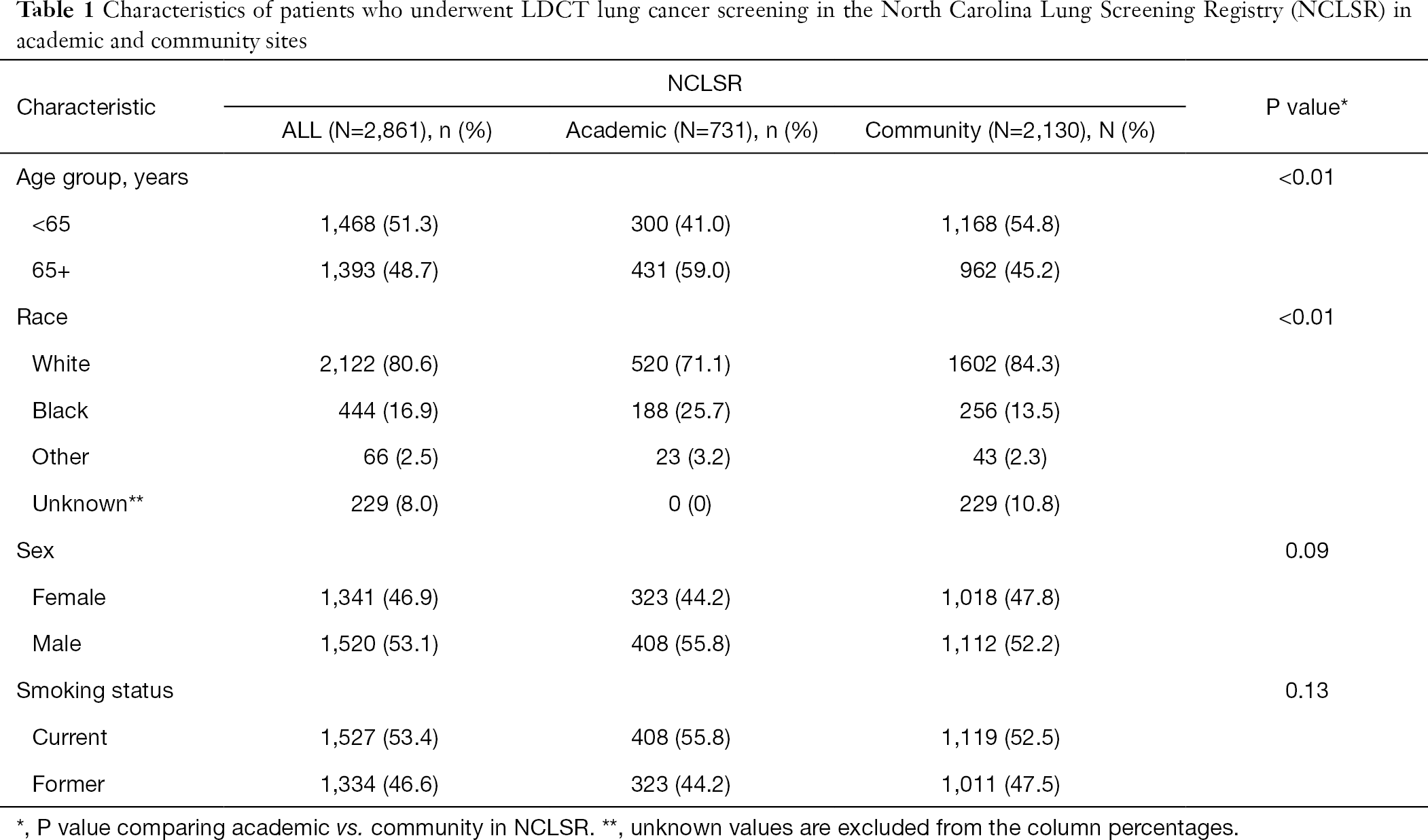 The distribution of Lung-RADS in the NLST, the NCLSR academic sites, and the NCLSR community sites, stratified by baseline and subsequent lung cancer screening examinations is shown in Table 2. On baseline screening exams, the proportion of positive LDCT exams was statistically significantly higher in NCLSR community sites (17.7%) versus in NCLSR academic sites (11.4%; P value <0.01) and in the NLST (13.6%; P value <0.01). Among subsequent screening exams, the proportion of positive exams was significantly lower in the NLST (5.9%) compared with the NLSR at academic (11.6%; P=0.01) or community (12.7%; P value <0.01) sites. Among NCLSR patients screened in subsequent rounds, the proportion with a positive LDCT result was similar in community and academic settings (P value =0.61). Even after adjusting for patient age, race, sex and smoking status, baseline lung cancer screening exams in NCLSR academic settings remained less likely to have a positive Lung-RADS [P value <0.01; adjusted odds ratio (aOR) =0.66, 95% confidence interval (95% CI): 0.51–0.86] compared to exams in community settings. There was no difference in the likelihood of a positive Lung-RADS assessment for subsequent screening exams in academic versus community settings after adjustment for patient characteristics (P value =0.68; aOR =0.91, 95% CI: 0.58–1.43). 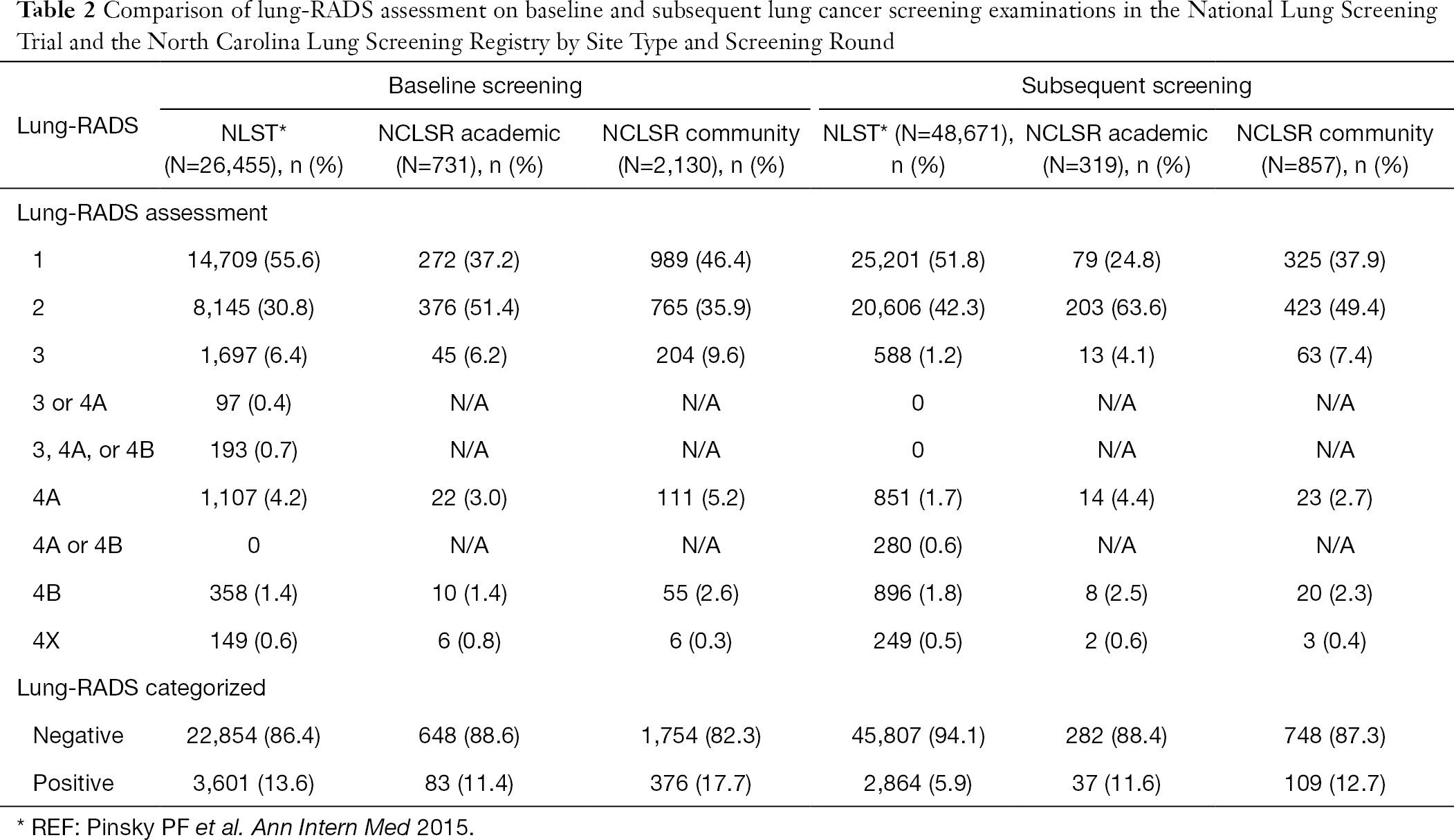 We found that on baseline lung cancer screening exams, positive rates in academic centers were similar to those in the NLST while rates in community sites were higher. On subsequent screening exams, the positive rate at academic sites did not decrease and while the positive rate did decrease for community sites, it did not decrease to levels observed in the NLST. The NLST was conducted primarily in urban, tertiary care hospitals with strict attention to image acquisition, regulation of radiologic interpretation conducted primarily by thoracic radiologists, and detailed follow-up protocols for nodules. These have led to concerns about the generalizability of the NLST results to lung cancer screening in community settings (1,6-8). Our results show the proportion of positive lung cancer screening examinations varied by screening round (baseline vs. subsequent) and imaging center type (academic vs. community), even after adjusting for patient characteristics.

Our finding of a higher proportion of positive lung cancer screening exams in community versus academic settings at baseline but not on subsequent examinations may be due to radiologists’ training, the availability of prior images for comparison, or clinical experience. In our study, screening exams conducted at academic sites were interpreted by cardiothoracic trained radiologists while those performed at community sites were more likely to be interpreted by general radiologists. The availability of prior images for comparison likely reduced the proportion of patients with a positive LDCT exam (i.e., those who were recalled before the next annual screen) in community sites on subsequent screenings yet we did not see this finding for academic sites. Recall rates in breast cancer screening are significantly lower in mammograms with versus without a comparison mammogram (6.9% vs. 14.9%) (12). Radiologists’ clinical experience could also play a role in the rate of positive screening exams, similar to that observed in mammography interpretation (13).

Funding: This work was supported by the National Institutes of Health under National Cancer Institute (grant R01 CA212014). The research presented in this paper is that of the authors and does not reflect the official policy of the NIH.

Ethical Statement: The authors are accountable for all aspects of the work in ensuring that questions related to the accuracy or integrity of any part of the work are appropriately investigated and resolved. The study was conducted in accordance with the Declaration of Helsinki (as revised in 2013). This study was approved by the University of North Carolina Institutional Review Board (No. 17-2352). Informed consent was taken from all individual participants.