Targeted therapy for epidermal growth factor receptor (EGFR) mutation in non-small cell lung cancer (NSCLC) developed quickly (1-5). EGFR exon 19 deletion (19del) was about 44% in EGFR mutations, and the most frequent subtype was delE756_A750, followed by delL747_P753insS, delL747_A750insP or delL747_T751 (6,7). Studies reported that the 19del subtypes could have different survival outcomes to EGFR-tyrosine kinase inhibitors (EGFR-TKIs) (8-13). Chung et al. found that response rate (RR) was significantly different between non-LRE (codons L747 to E749) deletions and other deletions (8), while others (10,12) did not find significant differences between the subtypes. Lee et al., Kaneda et al. and Sutiman et al. found that there were significant differences in progression-free survival (PFS) or overall survival (OS) between different EGFR 19del subtypes (9-11), however, it was not found in other studies (8,12,13). Truini et al. also found that a deletion subtype starting from L747 with insertion (delL747_A750insP) had different sensitivities to different EGFR-TKIs (14). So, the association is still fuzziness and worth further study between 19del subtypes and patient clinical outcomes.

EGFR T790M mutation occurred in about 60% when were resistant to first generation EGFR-TKIs (15,16). Studies reported that the incidence was higher in EGFR 19del than L858R patients (17,18). Besides, T790M might also distribute differently between EGFR 19del subtypes when patients are resistant to EGFR-TKIs (19). Osimertinib was efficient for T790M mutation patients. Whether it had different efficacy on the patients harboring T790M mutation in different EGFR 19del subtypes also needed to be studied. In the retrospective study, we explored the clinical characteristics and outcomes of patients harboring different EGFR 19del subtypes treated with first-line EGFR-TKIs, in order to better understand the impact of mutation subtypes to patients’ outcomes. We present the following article in accordance with the STROBE reporting checklist (available at http://dx.doi.org/10.21037/tlcr-19-359).

From April 2016 to August 2017, stage IIIB/IV Chinese NSCLC patients at diagnosis had EGFR/KRAS/BRAF/ALK/ROS1 gene mutation detection. All patients provided written informed consent before molecular detection. Among these, 208 patients harboring only EGFR 19del conducted DNA sequencing to detect the subtypes. Patients using gefitinib, erlotinib, icotinib, or afatinib as first-line treatment was conducted for subsequent analysis. Osimertinib used for patients harboring EGFR T790M was analyzed in this study. Clinical outcomes were followed up until April 2019. This study was approved by the Ethics Committee of Shanghai Pulmonary Hospital (K19-066Y). 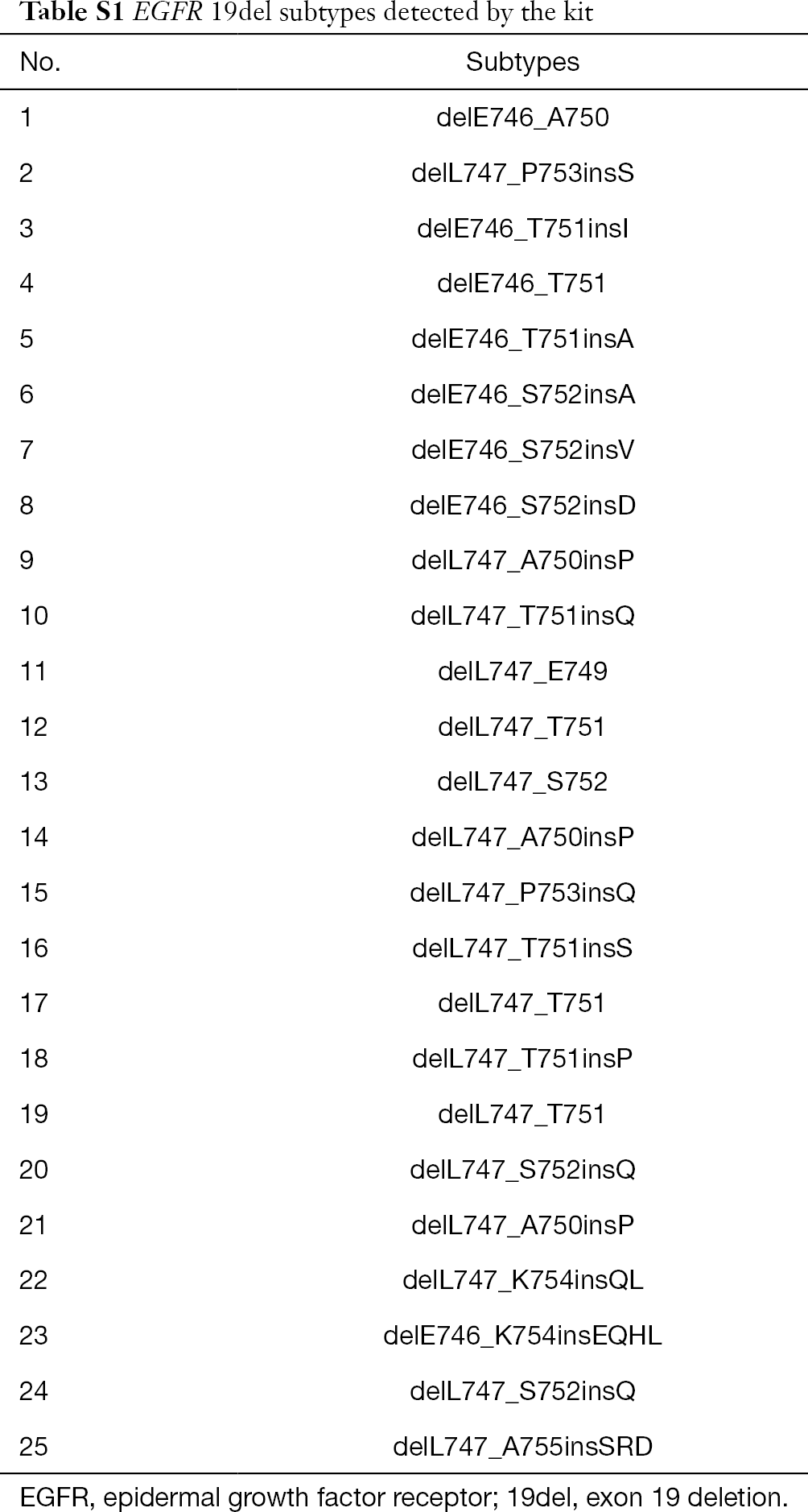 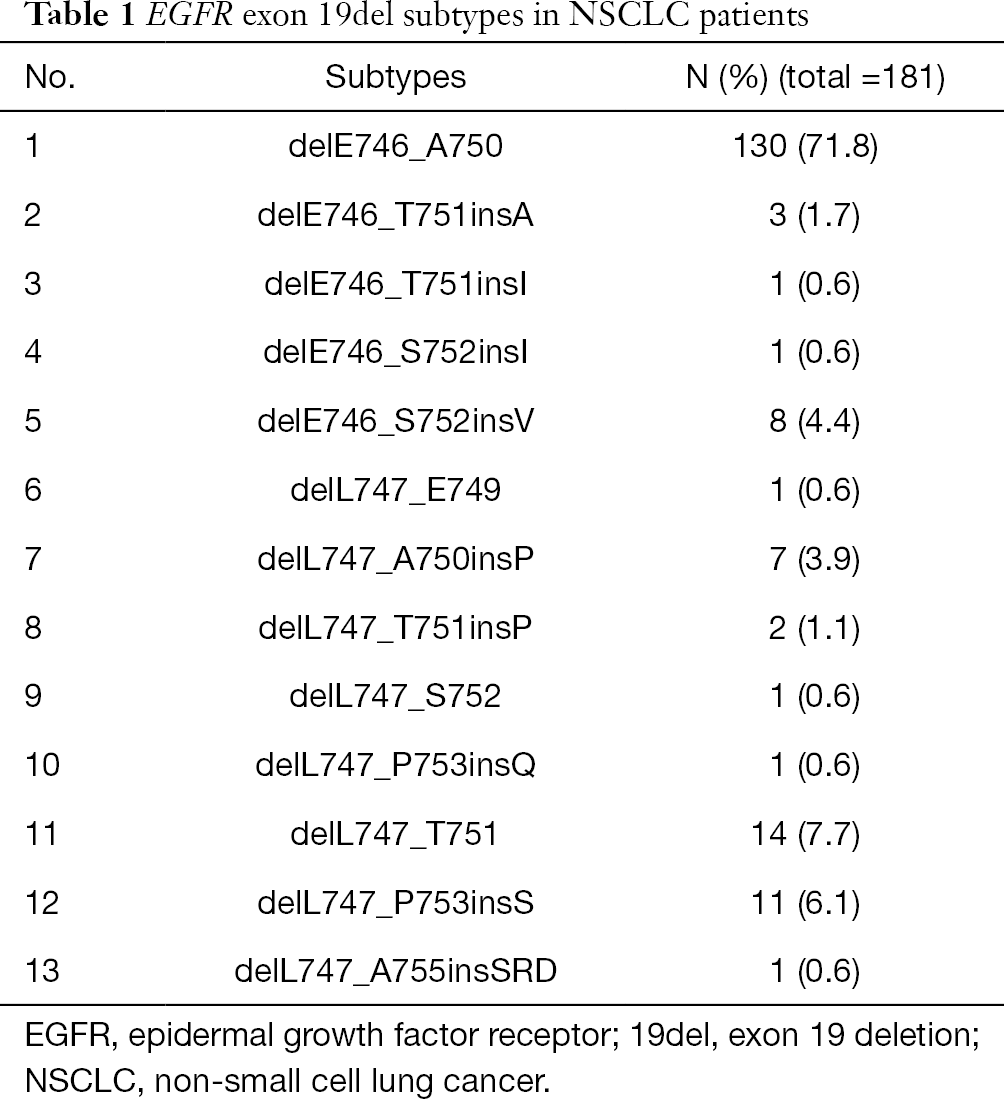 Since deletions starting from E746 and L747 were two major kind of subtypes, and delE746_A750 was the most frequent subtype, we analyzed the clinicopathological features of the patients according to the two classifications (Table 2). delE746_A750 and deletions starting from E746 were frequently found in female (P=0.003 and P=0.013, respectively) and never smoking patients (P=0.002 and P=0.014, respectively). ARMS was used to detected T790M mutation after patients were resistant to first-line EGFR-TKIs. Interestingly, we found that the ratio of T790M was higher in patients harboring delE746_A750 or deletions starting from E746 (P=0.001 and P=0.006, respectively, Table 2). Further, we wanted to explore whether there was sample bias in T790M detecting, and found that there was no significant differences in both classifications (Table 2). 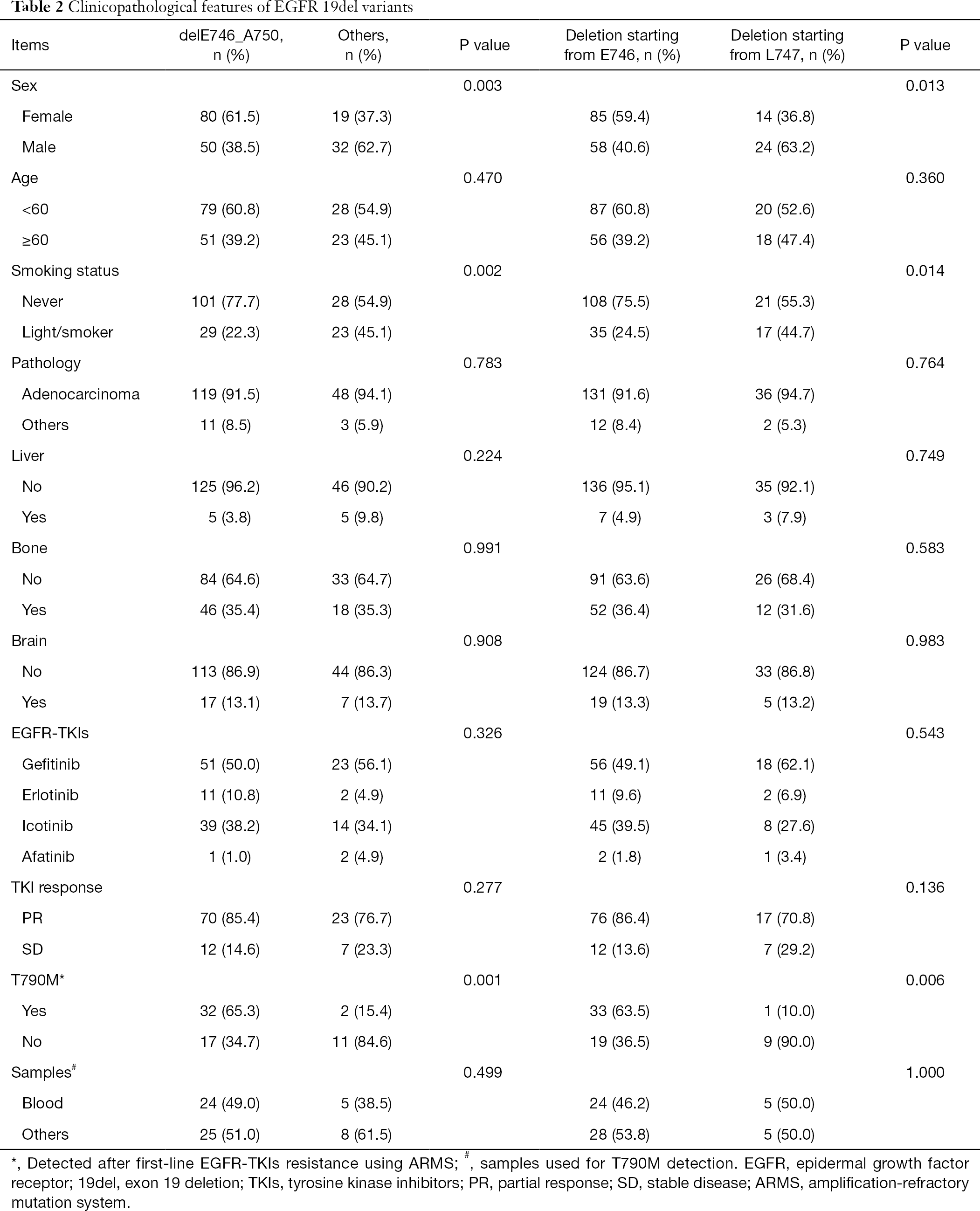 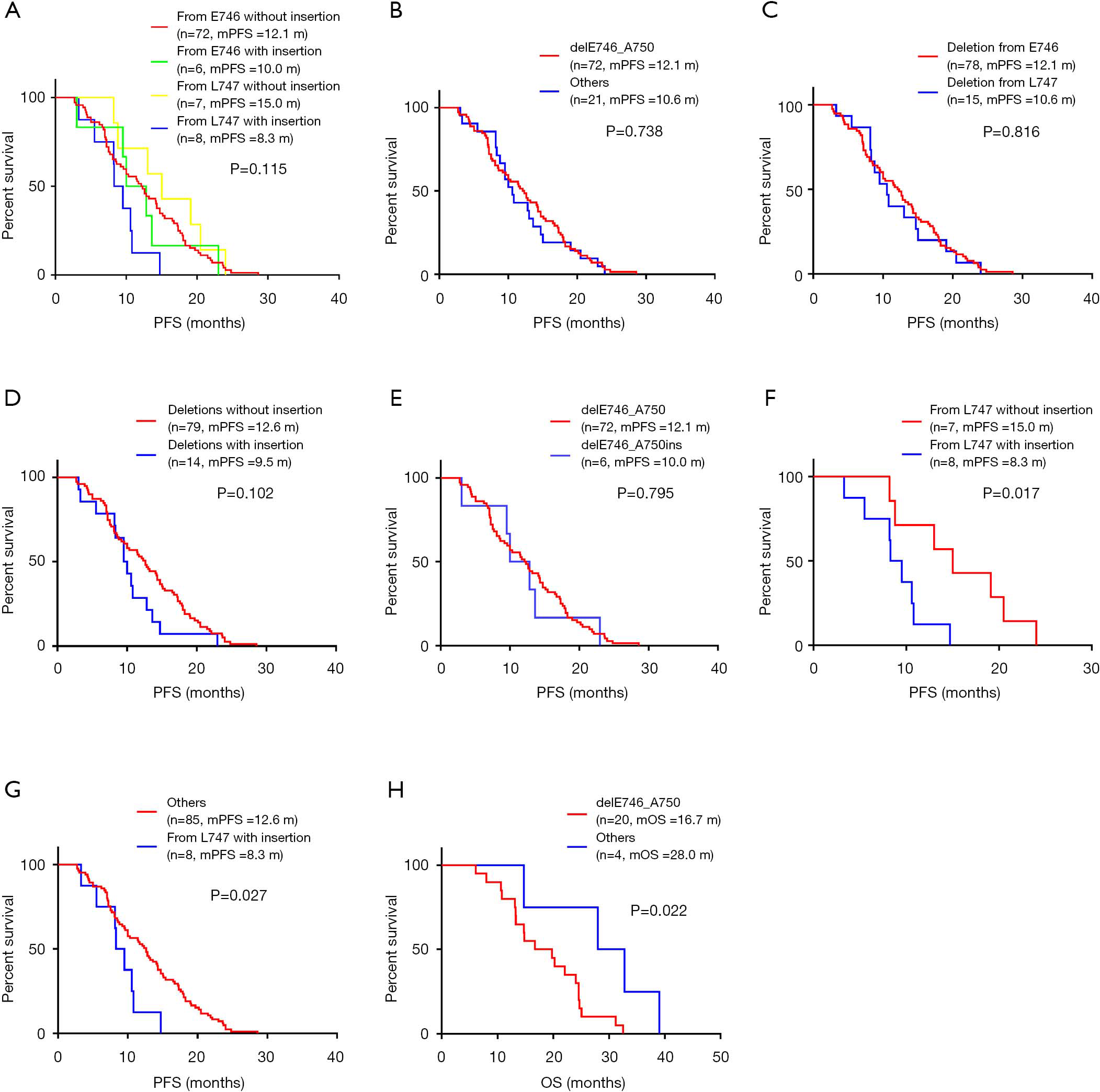 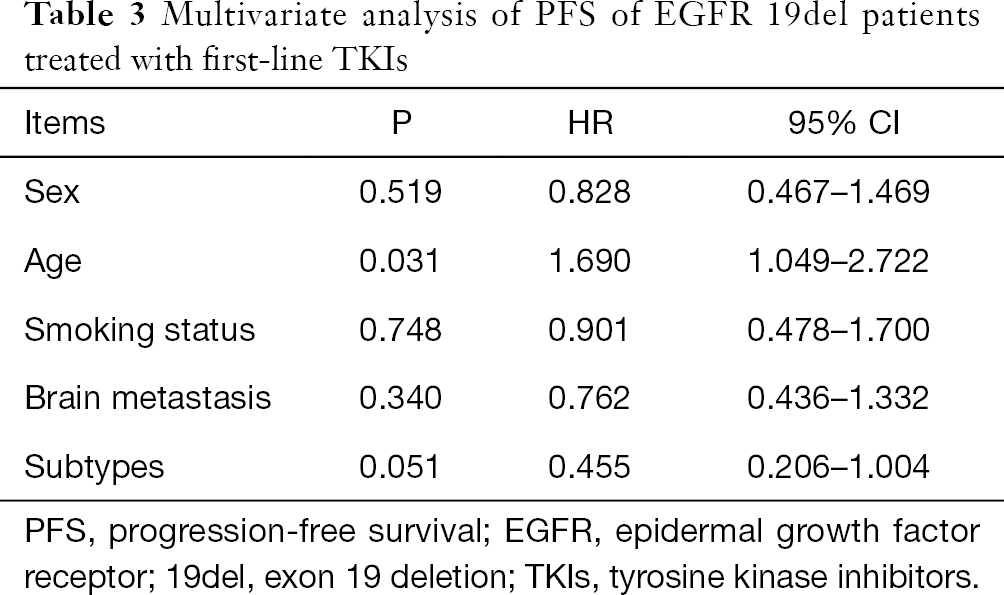 As patients with EGFR 19del could use different EGFR-TKIs for first-line treatment, we examined whether there were different clinical outcomes treated with different drugs. The ORR was 83.9% for gefitinib, 81.8% for erlotinib, 79.4% for icotinib and 100% for afatinib (P=0.784, Table S2). As there was only one patient treated with afatinib got PFS data, we did not include this patient in the following analysis. For all the other patients, there was no significant difference between different regimens in PFS (11.7 months for gefitinib vs. 8.5 months for erlotinib vs. 12.3 months for icotinib, P=0.123, Figure 2A). In patients with del746_A750, deletions starting from E746 with insertion, deletions starting from L747 with or without insertion, there were no significant differences between different drugs (P=0.061, P=0.156, P=0.701, and P=0.487, respectively, Figure 2B,C,D,E). We also investigated whether there was different resistant pattern (T790M) using different drugs, and found no significant difference (52.4% in gefitinib, 57.1% in erlotinib, and 61.5% in icotinib, P=0.837, Table S3). Further, the first-line PFS was not significantly different in patients harboring T790M or not when resistant to first-line EGFR-TKIs (11.5 months for T790M+, 14.7 months for T790M–, P=0.092, Figure 2F). 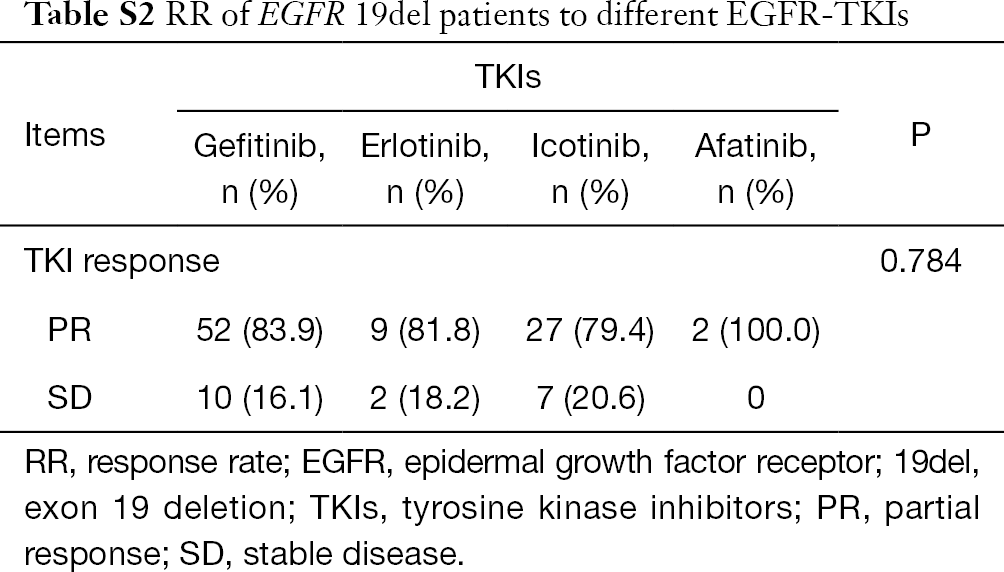 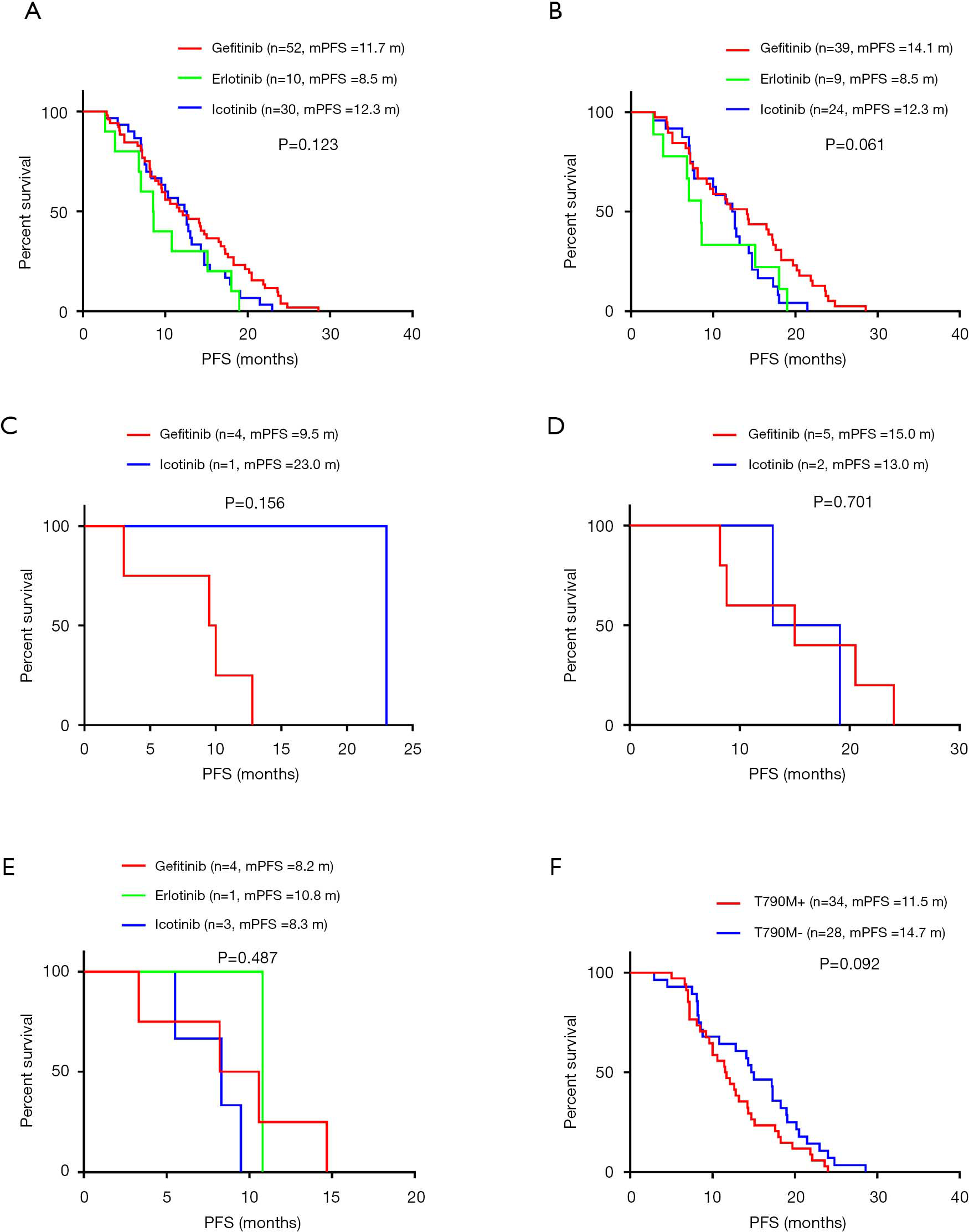 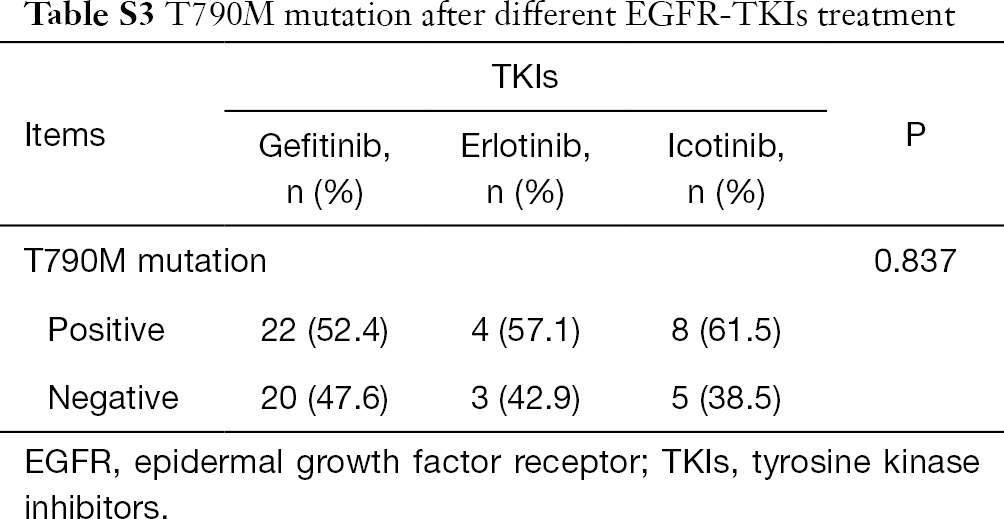 As we showed the results in Table 2, EGFR T790M mutation distributed differently in EGFR 19del subtypes. Whether these patients responded differently to osimertinib was analyzed in the study. Among the patients, 25 got PFS data treated with osimertinib: 20 with delE746_A750 deletion, one with delE746_S752insV, two with delL747_T751, and two with delL747_P753insS. There was no significant difference between patients harboring delE746_A750 deletion and other mutations in PFS (4.0 vs. 9.5 months, P=0.102, Figure 3A), and also no significant difference between patients with deletions starting from E746 and L747 (5.4 vs. 8.0 months, P=0.102, Figure 3B).

Various EGFR 19del subtypes had been reported (6,7,12). Among these, delE746_A750 was the most frequent subtype, which was in accordance with our results. Deletions starting from E746 and L747 are two frequent subtypes, and the clinical features and outcomes had been compared in former studies (8,12,13). So, in this study, we applied the two classification models on these patients. It was found that delE746_A750 or deletions starting from E746 were most likely to be found in female and never smokers, indicating that even in the EGFR 19del patients there were still different clinical features between them.

The RR and clinical outcomes treated by EGFR-TKIs were compared between different EGFR 19del deletions in former studies, while the results were inconsistent. In these studies, there were mainly three methods to group the 19del patients: deletions from the starting codon E746 or L747 (8,9,12,13); deletions with or without insertion/substitution (9-11); deletions of “LRE” or “non-LRE” (8,11,12). From these studies, we speculated that the clinical outcomes could be different between NSCLC patients harboring different EGFR 19del subtypes, which was that patients with deletions starting from E746 had better outcomes than from L747, and a special subtype of deletion starting from L747 might influence the outcomes. In this study, we found that deletions starting from L747 with insertions had the shortest PFS. However, as the patient number was small, it was not reasonable to further specify which insertion type had the most important influence. Multivariate analysis showed that the deletion subtypes had marginal effect on PFS, indicating that patients with deletions starting from L747 with insertion could be most possibly getting inferior benefit from TKI treatment, and need large samples to confirm the results. Studies explained the relationship between 19del subtypes and outcomes of TKIs treatment in two dimensions: structural features and drug sensitivity. Truini et al. showed the structural features to explain their results (14). However, they mainly analyzed two 19del subtypes. More computational models of mutual interaction between deletion subtypes and EGFR-TKIs will be needed to provide a deep understanding of the interaction. Studies also explored the association from drug sensitivity, they found that delE746_A750 had the lowest IC50 value for target drugs, while others had relative higher IC50 value (22-24). However, the situation was more complicated in patients, as co-alteration of EGFR mutation with other genes could also influence the outcomes (25). We found that patients harboring delE746_A750 had shorter OS than others. As we know, many factors could influence patients’ OS, including sample size, follow-up treatments, etc. In this study, we think the most important limitation would be the patient number—a large number of patients and their PFS and OS data are extremely needed. We will follow up the other patients and do further analysis in the future. And it also would be better to know comprehensive gene mutation spectrum (e.g., co-alteration or passenger gene mutations) of the patients to understand the impact of 19del subtypes to patient outcomes.

T790M mutation is the main reason for first/second generation EGFR-TKI resistance. Studies already showed that the incident rate of T790M mutation was higher in EGFR 19del patients than L858R patients (17,18). Huang et al. also reported that T790M mutation had a higher prevalence in delE746_A750 than other 19del subtypes (19), which was in accordance with our results. Besides, we found that it was higher in deletions started from E746 than from L747. We used ARMS PCR to detect T790M for two reasons. Firstly, it is widely and commercially used in China for its convenience and fast speed. Secondly, we only analyzed the data detected by this method to reduce data bias brought by different detecting methods. From former studies (14,22-24), it seemed that delE746_A750 was more sensitive to EGFR-TKI than deletions starting from E746 with insertions. But for deletions starting from L747, it was complicated. They had similar or higher IC50 than dellE746_A750. It seemed that the more intensive affinity between drugs and EGFR mutants, the less incidence of mutation in the same gene would occur-T790M in this study. Evolution theory, mutation tendency or other theories may be included to clarify the mechanism in the future. Although they had similar outcomes when treated with osimertinib, patients harboring deletions starting from L747 had longer PFS, indicating these patients could more possibly benefit from osimertinib, and also the optimal treatment of osimmertinib or first/second generation TKIs for different 19del subtypes. We will follow up the outcomes of other patients to find if there would be significant difference, and also the outcomes of 19del patients using osimertinib for first-line therapy.

In conclusion, different EGFR 19del subtypes of NSCLC patients have different clinical features and outcomes, the mutant rate of T790M after EGFR-TKI resistance could be higher in delE746_A750 or deletions starting from E746 patients, but do not significantly influence outcomes of patients harboring different 19del subtypes when treated with osimertinib.

Reporting Checklist: The authors have completed the STROBE reporting checklist. Available at http://dx.doi.org/10.21037/tlcr-19-359

Ethical Statement: The authors are accountable for all aspects of the work in ensuring that questions related to the accuracy or integrity of any part of the work are appropriately investigated and resolved. This study was approved by the Ethics Committee of Shanghai Pulmonary Hospital (K19-066Y).