Lung cancer is the leading cause of mortality in the world with more than 1.7 million deaths annually (1). Screening with low-dose or thin-slice computed tomography (CT) has been widely adopted for early detection and intervention (2,3). As a consequence, in recent years, there is a rapid increase in the detection of accidental pleuropulmonary nodules (4), including some rare lesions, like pleuropulmonary meningothelial proliferation (PMP).

In this study, the umbrella term as PMP contains (I) metastatic pulmonary meningiomas (MPMs), (II) primary pulmonary meningiomas (PPMs) and (III) minute pulmonary meningothelial-like nodules (MPMNs). Previous studies suggested that these lesions could share some similar genetic, histological and biological features (5-8). To date, however, the understanding of the clinical management of PMP is limited.

Metastatic meningioma was first reported in 1880s (9). And lung is one of the most frequently metastatic sites (10). So far, there is little evidence on the optimal intervention for MPM, especially for multiple lesions (11). PPM, as a rare entity, is usually considered as a benign tumor with indolent course (12). However, it could also have metastasis (13,14). The change in the term, from pulmonary paraganglioma (chemodectoma) (15) to MPMNs (16), is resulted from the recognition of the microstructure of the tiny lesions. The incidence of MPMNs is much higher than those of MPMs and PPMs, reaching 0.3% to 13.8% among cases of autopsy and resection (6,17-19). MPMNs often manifest as multiple, round, solid or partly-solid nodules less than 5 mm in diameter (17-19). It has raised more and more interest with the increase of early lung cancer presenting as small nodules.

In this study, we retrospectively reviewed a series of PMP, and conducted a comprehensive presentation of the radiological manifestations, histological features and surgical outcomes. We aimed to improve the understanding of the clinical management of PMP.

We retrospectively searched PMP (MPMs, PPMs and MPMNs) on medical database (May 2005 to April 2019) of Department of Thoracic Surgery, Zhongshan Hospital, Fudan University. All of these patients had undergone surgical resection and pathological examination.

The demographic information was extracted from the database. And the perioperative data, mainly including medical imaging, surgical information, immunohistochemical (IHC) staining, were extracted from the electronic medical system. The follow-up data were attained by multiple approaches, including outpatient clinic and phone calls. The last follow-up was in May 2019. All the data were secured. Each patient had signed the informed consent form and approved the usage of the information at the initial administration. The institutional review board of Zhongshan Hospital of Fudan University approved this study (HGBB-20191201). The study was conducted in accordance with the Declaration of Helsinki. 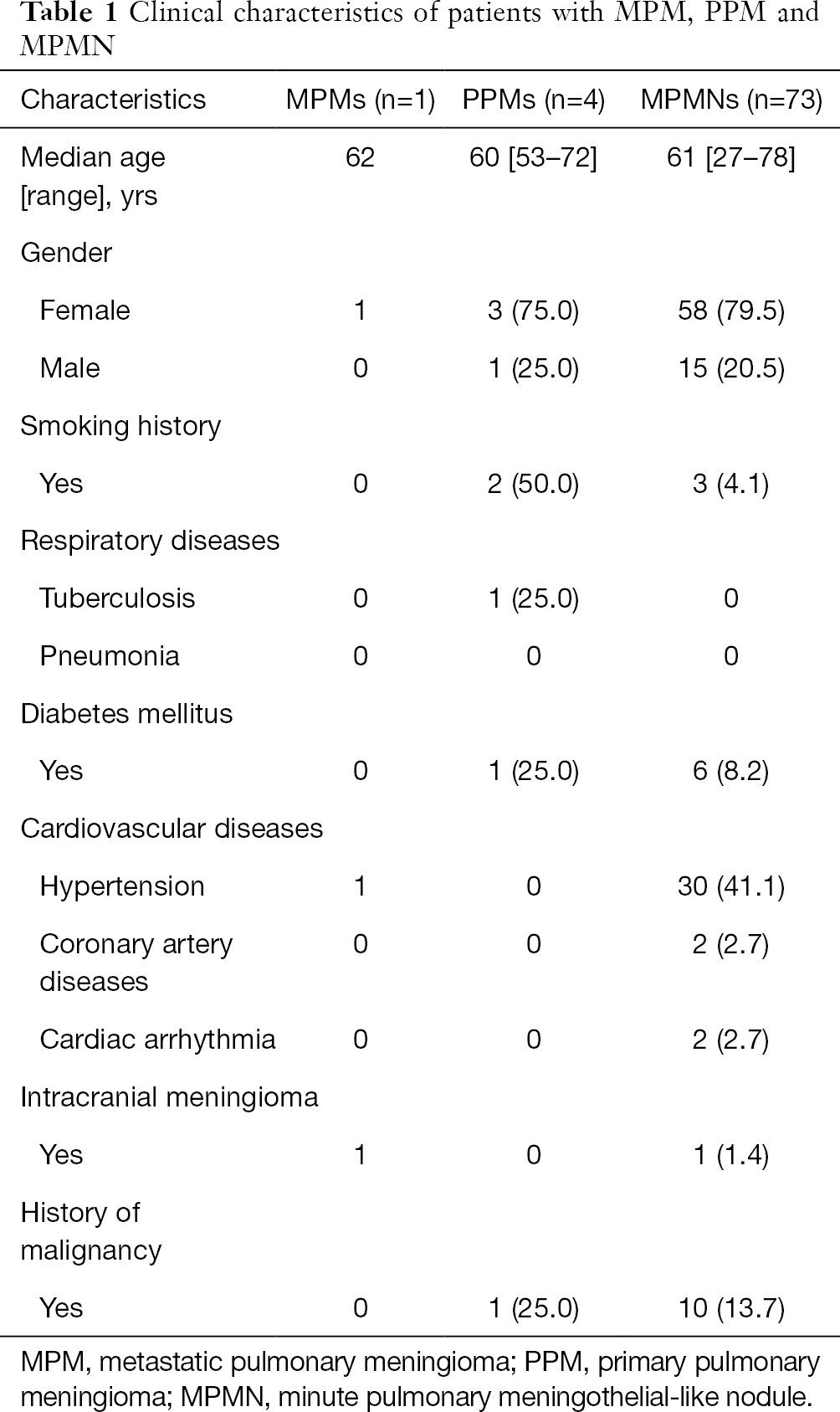 The patient with MPMs was asymptomatic. The disease was initially found on a chest X-ray before the operation for intracranial meningioma in July 2011. The subsequent CT revealed that there were multiple pulmonary nodules and one mediastinal mass. The maximal pulmonary nodule was located in the right lower lobe, measured as 10 mm with a round, solid and well-circumscribed appearance (Figure 1A). There were several similar but smaller nodules in the bilateral lobes, ranging from 1 to 6 mm (Figure 1B). On the 18F-FDG PET-CT scan in the same period, none of the nodules showed abnormal metabolic activity while the mediastinal mass measured as 13 mm had a slight uptake (Figure 1C). Then in July 2016, the patient underwent a wedge resection of one peripheral pulmonary lesion due to the gradual increase in diameters of the nodules. And the lesion was histologically confirmed as MPM. During the subsequent surveillance, the CT scan in December 2018 revealed that the maximal pulmonary nodule in the right lower lobe had increased to 19 mm (Figure 1D) and the mediastinal mass had increased to 43 mm (Figure 1E). 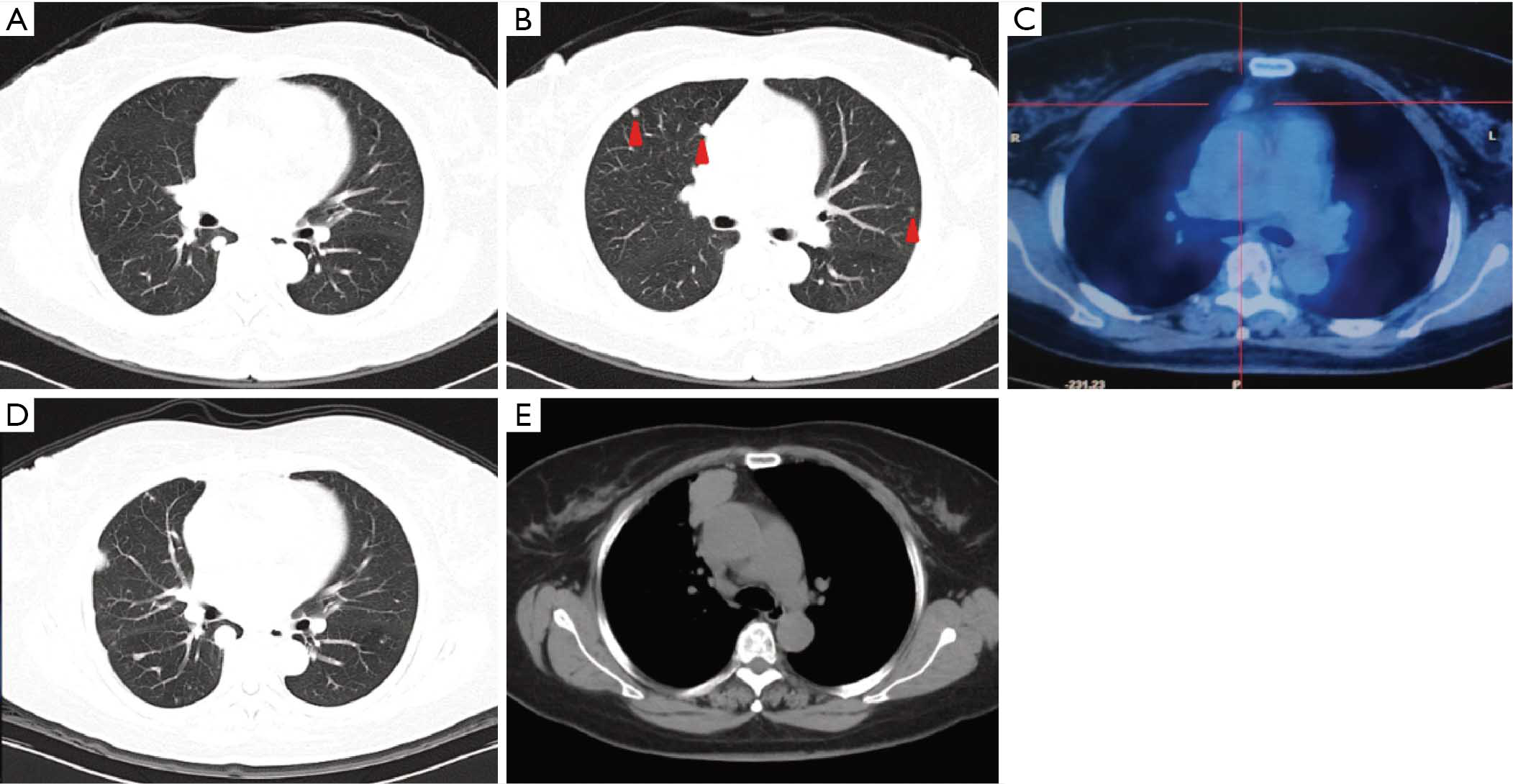 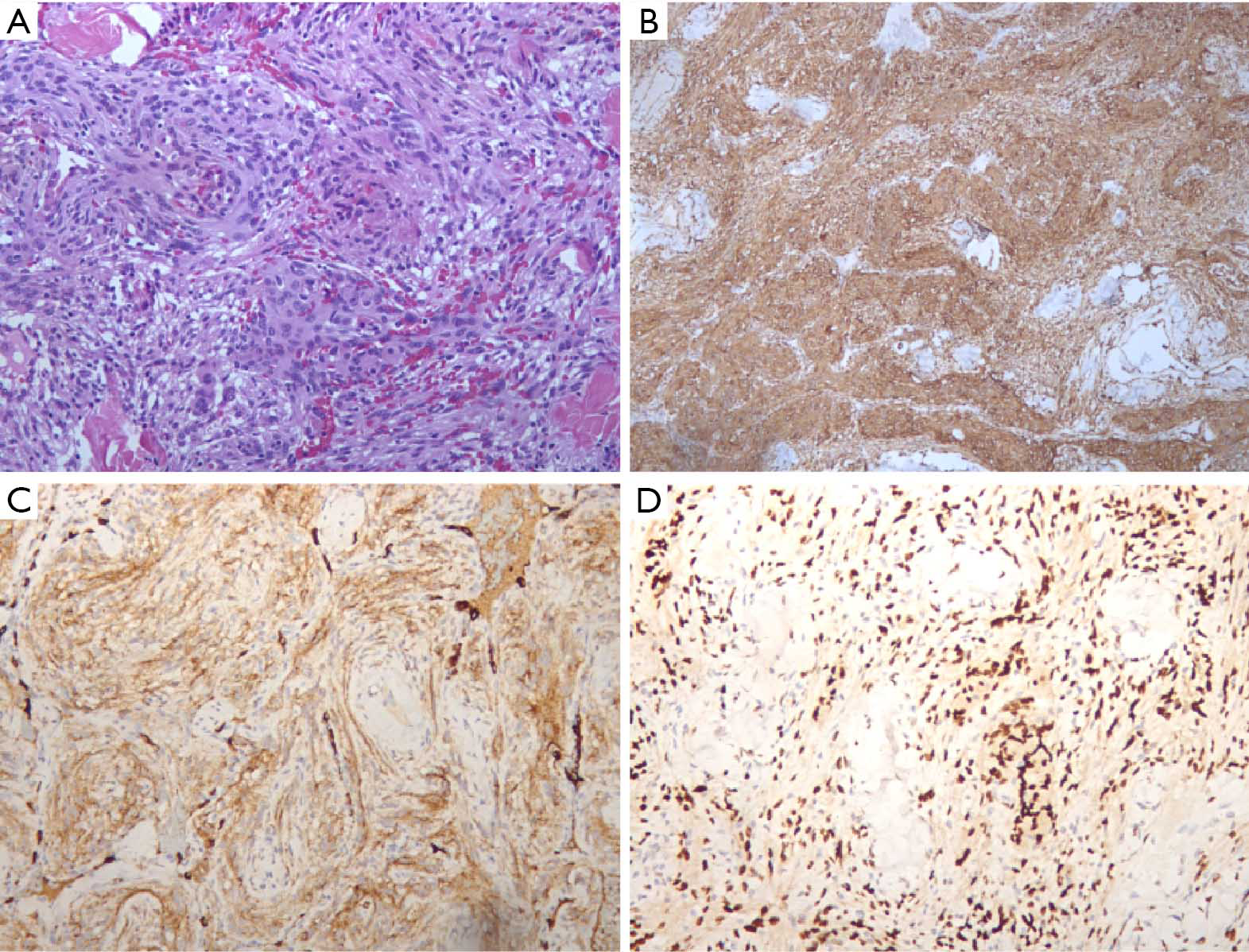 To date, the patient received an active monitoring but no intervention on the pulmonary lesions and the mediastinal mass.

The four patients with PPMs also had no specific symptoms. On chest CT scan, the PPM appeared as an isolated, round, solid, and well-circumscribed nodule, with or without lobulation (Figure 3A,B). For the four patients, the brain magnetic resonance imaging scan found no absence of intracranial meningioma. None of the patients received 18F-FDG PET-CT before operation. 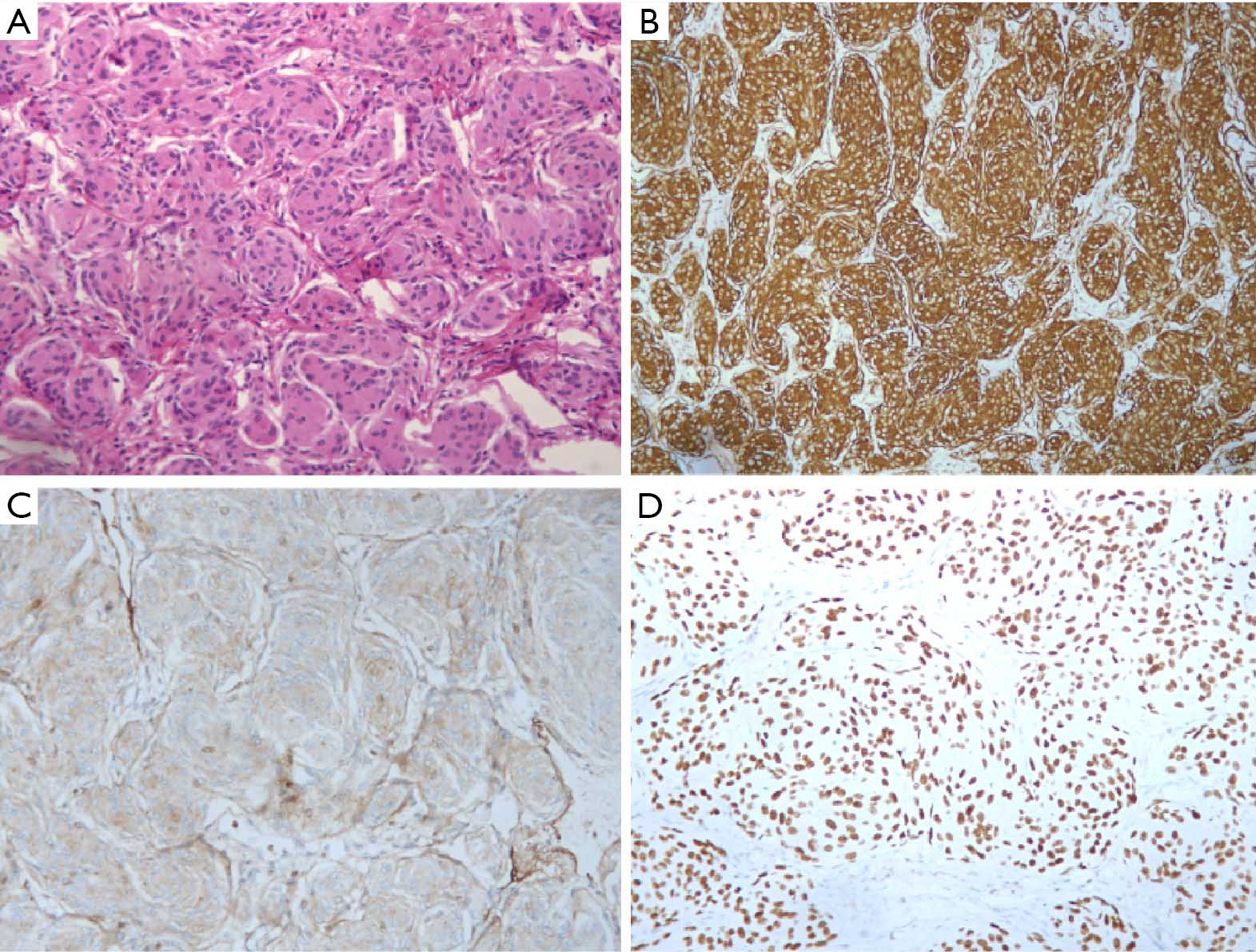 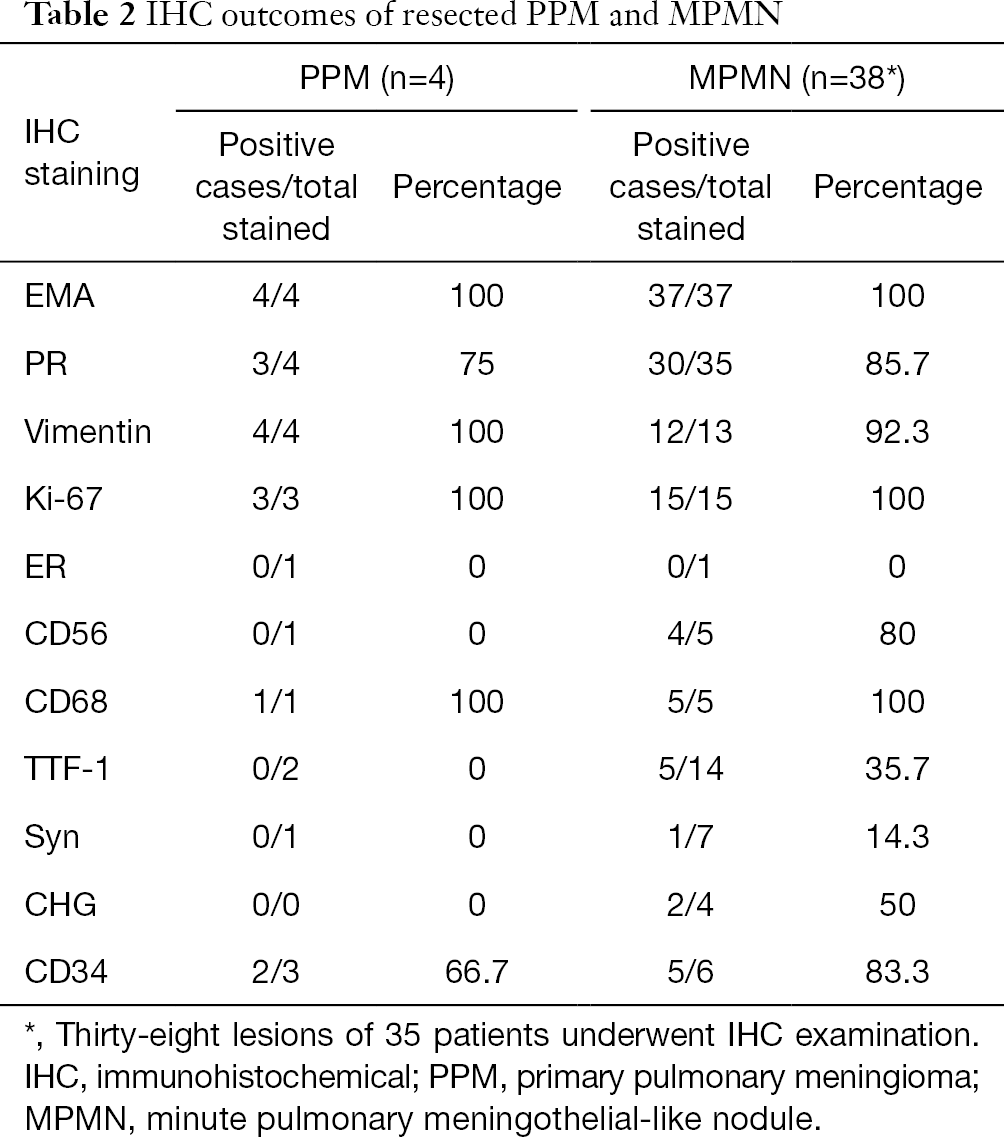 To date, all of four patients were alive with the longest follow-up reaching 14 years.

In this retrospective study, 73 cases were identified with MPMNs. Of these patients, 68 (93.2%) had MPMNs with synchronous lung cancer-related lesions, including atypical adenomatous hyperplasia, adenocarcinoma in situ, minimally invasive adenocarcinoma and invasive adenocarcinoma. These MPMNs manifested on chest CT scan as multiple, round, randomly-distributed, solid or partly-solid nodules, most of which were less than 4 mm.

For the other 5 (6.8%) patients without synchronous lung cancer-related lesions, however, the MPMNs were initially presumed as pulmonary malignancies, and thus underwent surgical resection. These MPMNs were shown on chest CT as ground-glass opacities (GGOs) with or without mixed components (Figure 5A,B,C), or solid nodule (Figure 5D), measured from 5 to 14 mm, mimicking early lung cancer. 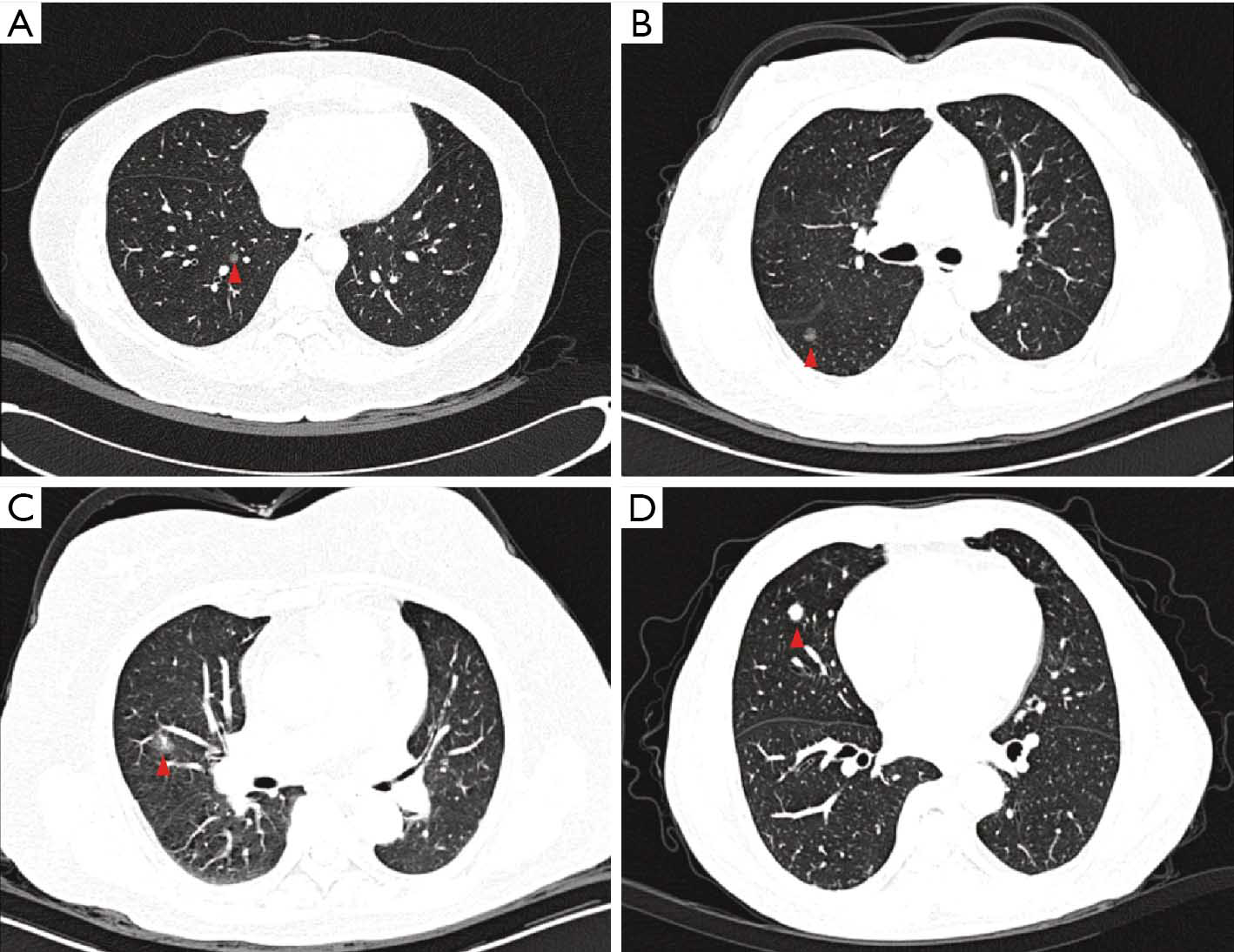 Among these five cases, before surgical intervention, three patients had a long-term surveillance (ranging from 2 to 6 years), which suggested little progression no matter in diameter or density; the other two were radiologically diagnosed with malignant lesions due to the large sizes and the solid components. 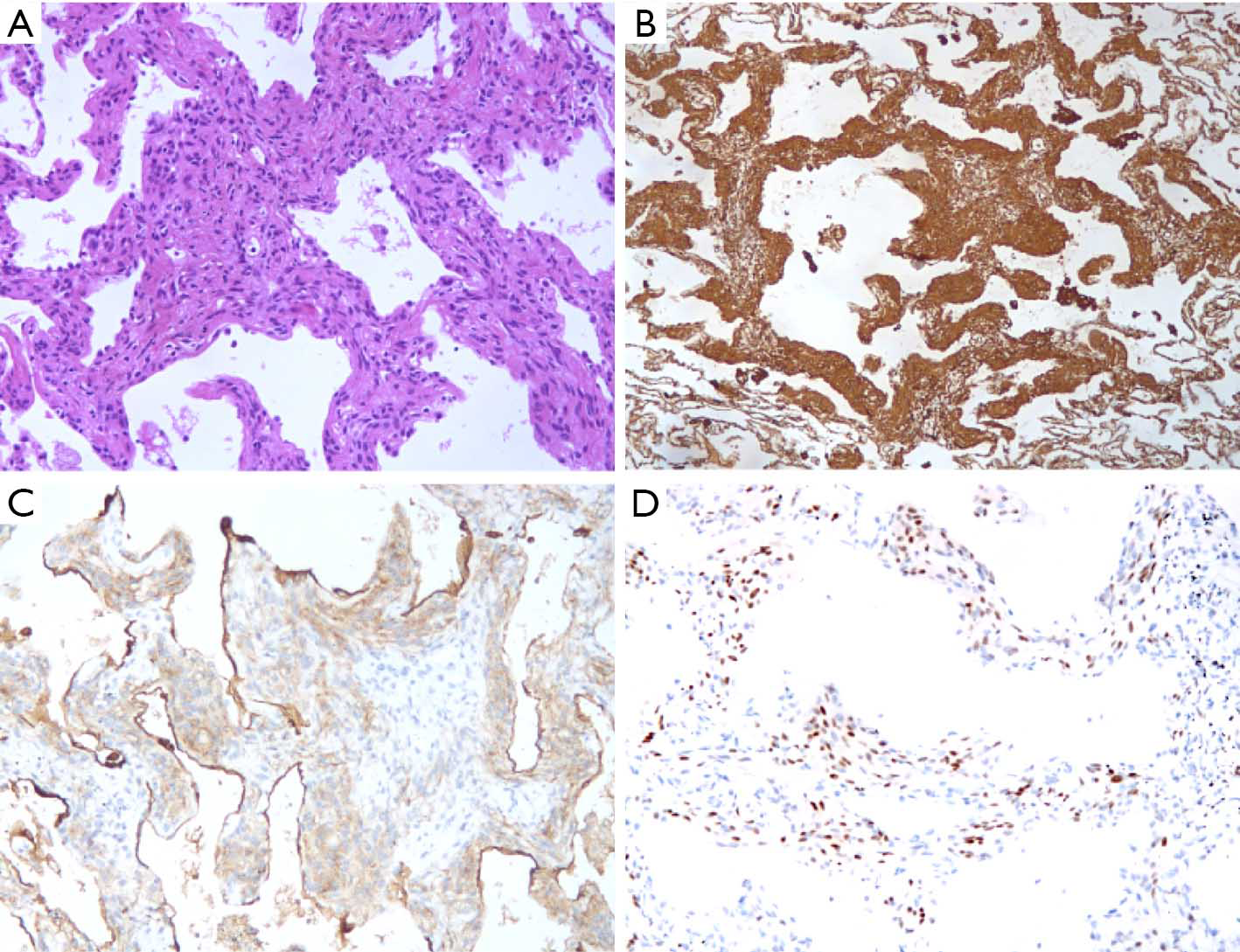 There were no recurrences of MPMNs after resection. The five patients only with MPMNs were all in a regular surveillance.

In this study, the umbrella term as PMP included MPMs, PPMs and MPMNs. According to the published studies, these lesions usually caused no specific symptoms and were identified incidentally. Currently, the understanding of the clinical management of PMP is limited. We retrospectively reviewed the case series in our center and presented radiological manifestations, histological features, and surgical outcomes. All of these made us rethink the clinical management of the disease.

As previously reported, MPMs usually presented as isolated or multiple, round and well-circumscribed nodule, located within the lobes or nearby the pleura (20,21). The clinical diagnosis was usually based on the history of intracranial meningioma. But it could be difficult as the absence of intracranial meningioma. In one particular case, an incidental pulmonary meningioma histologically confirmed after surgery revealed an unexpected intracranial meningioma (22). For resectable MPMs, surgical intervention could achieve satisfying long-term survival (21), which suggested that it tended to be benign in spite of “metastatic” nature. However, for the cases with unresectable extensive metastasis, the treatment could be intractable. Some retrospective and small prospective study suggested that chemotherapy and antiangiogenic therapy could have some roles (11,23,24). Other novel systemic therapies are still on the way. In our study, the patient has received an active observation for three years. And the lesions, both the pulmonary and the mediastinal ones, are gradually progressing. From our point of view, a radical resection of the lesions causing symptoms, with or without subsequent medical therapy, may be appropriate.

PPMs had a diverse appearance on chest CT. It usually manifested as an isolated, solid and well-circumscribed nodule with or without lobulation (25-29). However, one recent study reported PPMs showed as multiple cystic lesions (13). And another study reported a PPM presenting as 4.5 mm GGO (30). PPMs could have metabolic activity on 18F-FDG PET (25,31). It was usually regarded as a benign disease (28). For PPM, surgical intervention can also achieve satisfying long-term outcome reaching about 24 years (32). Ohashi-Nakatani et al. had reported preoperative cytological assessment (28). In our study, one of the four cases underwent a percutaneous puncture and histological examination in local hospital. And it was confirmed as pulmonary meningioma. Thus, the lobectomy could have been avoided, and active observation could be an alternative.

One previous study suggested that MPMNs often presented in female patients and coexisted with adenocarcinoma (17). In our study, most (68/73, 93.2%) of cases with MPMNs were in tiny size and were resected due to the synchronous cancer-related lesions. We presumed that the real incidence of MPMNs could be underestimated. The other five cases received surgical resection due to the initial clinical diagnosis as cancer-related lesions. It is difficult to radiologically differentiate MPMNs from early-staged lung cancer, as most of the lesions were in tiny size less than 5 mm showing as GGO with or without mixed components (17-19). In our study, the largest one even reached 14 mm in diameter. In our opinion, an active observation could be essential to avoid misdiagnosis and unnecessary resection.

In general, radiological diagnosis of PMP is of difficulty. However, because of the characteristic histological features, percutaneous puncture is able to offer an accurate answer. As shown in Figure 7, the one case with MPM, the four case with PPM, and the five case with MPMN but no cancer-related lesions showed a considerable surveillance before surgery and a satisfying surveillance after surgery. Thus, PMP tends be a benign disease with indolent nature. In our opinion, although surgical resection can achieve good prognosis, active observation is also an alternative due to the surgical invasiveness and the indolent nature of the disease. 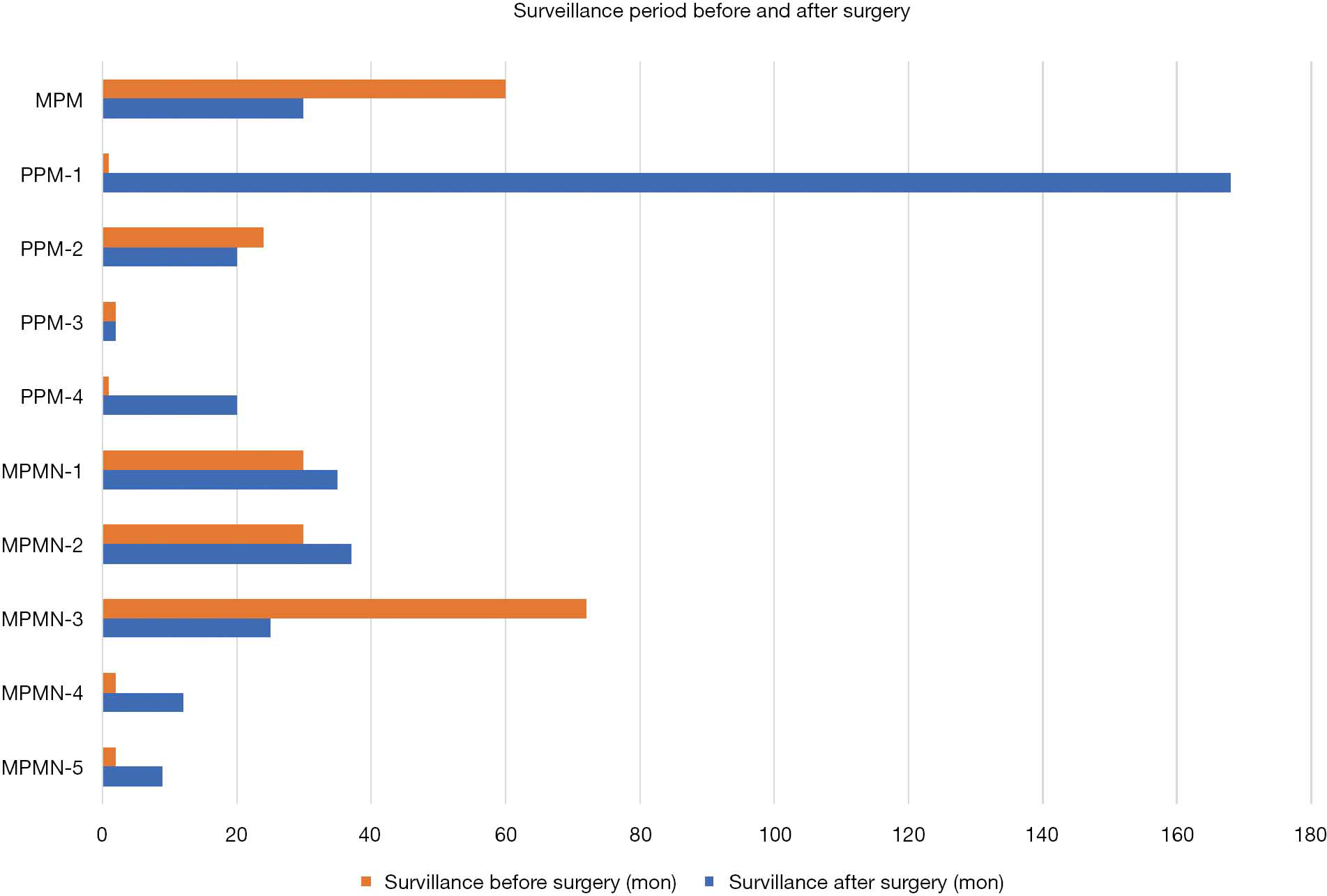 There were some limitations in our study. During the studied period, more than tens of thousands of cases underwent surgical resection for pulmonary lesions in our center. However, there was no direct comparison between PMP and other pulmonary lesions in our study. But as a case series study, it contained a relatively large sample size with medical imaging and clinical management. We also proposed some undetermined questions with potential strategies. All of these might be of some importance for further improvement in radiological diagnosis and clinical management.

PPM has variable radiological manifestations. But it can be histologically identified by the characteristic features. Although surgery is able to achieve satisfying prognosis, active observation is an alternative in selected cases due to the surgical invasiveness and the indolent nature of the disease.

We thank Dr. Dongxian Jiang (Department of Pathology, Zhongshan Hospital Fudan University) for the kind help in the interpretation of the histological features.

Conflicts of Interest: All authors have completed the ICMJE uniform disclosure form (available at http://dx.doi.org/10.21037/tlcr-19-699). The authors have no conflicts of interest to declare.

Ethical Statement: The authors are accountable for all aspects of the work in ensuring that questions related to the accuracy or integrity of any part of the work are appropriately investigated and resolved. Each patient had signed the informed consent form and approved the usage of the information at the initial administration. The institutional review board of Zhongshan Hospital of Fudan University approved this study (HGBB-20191201). The study was conducted in accordance with the Declaration of Helsinki (as revised in 2013).