It is recognized that angiotensin converting enzyme 2 (ACE2) is crucial for the SARS-CoV-2 viral entry mediated by spike glycoprotein S, and it has been cleaved by the transmembrane protease serine TMPRSS2 (1). ACE2 levels are low in the lung and bronchial branches, except in the lung alveolar epithelial type II cells (1,2). The SARS-CoV-2 also binds to ACE2 in non-small cell lung cancer (NSCLC) cells, in vitro. ACE2 and TMPRSS2 mRNA levels are higher in the human Calu-3 NSCLC cell line than in normal lung cells (1). Camostat mesylate (a TMPRSS2 inhibitor) reduces SARS-2-S, but not vesicular stomatitis virus-glycoprotein (VSVG)-driven entry into the Calu-3 cells (1). Acid sphingomyelinase (ASM), which generates ceramides in response to cellular stress, is required for plasma membrane expression of hepatocyte growth factor receptor (MET) in cancer cells, but is dispensable for VSVG trafficking (3). Furin is also necessary for the SARS-CoV-2-S entry, and a virtual ligand screening of furin proteins has shown that several anticancer agents and other compounds can act as furin inhibitors (4). Co-expression of ACE2, TMPRSS2, and/or furin, occurs in healthy human lung tissues, but is low in the A549 NSCLC cell line, which poses the question whether other receptors can intervene in SARS-CoV-2 viral entry (4,5). ACE2 is an interferon-stimulated gene in airway cells and it has been described that SARS-CoV-2 induces interferon-driven upregulation of ACE2 (6). However, A549 cells (KRasG12Smut/MET overexpressed) do not express ACE2, even after interferon stimulation (6). Furin is the main proprotein convertase in the activation of many receptors such as MET, insulin like growth factor 1 (IGF1), and TGF-β1, and also some viruses such as HIV-1 (7). Since folates and methotrexate have been identified as furin-like inhibitors (4), it is tempting to speculate that the SLC19A1 receptor could also participate in the SARS-CoV-2 entry process. Indeed, SLC19A1 is a major transporter of cyclic dinucleotides produced by malignant cells and bacteria, and their uptake is inhibited by folates and methotrexate (8). Furthermore, the abundance of this receptor induces stimulator of interferon genes (STING)-interferon signaling (8). Since SARS-CoV-2 infects and replicates in low ACE2 expressing human lung cancer cell lines, we hypothesize that this emergent infection could be facilitated by other receptors and signaling pathways that are also involved in NSCLC. In H1993 cell lines (KrasG12Vmut/MET overexpression), IGF1-Akt signaling phosphorylates phosphoenolpyruvate carboxykinase 1 (PKC1) with further phosphorylation of insulin-induced gene 1 and 2 (INSIG1/2), which leads to the activation of sterol regulatory element-binding proteins (SREBPs) with transcription of lypogenesis-related genes in the Golgi apparatus and tumor proliferation (9). Since INSIG1 inhibits HIV-1 (10), it is plausible that IGF1-R and MET activated by furin can cooperate with SLC19A1-STING in endoplasmic reticulum-Golgi intermediate compartment (ERGIC) interferon signaling (Figure 1). In short, this new evidence opens a new perspective on NSCLC cancer patients for combination treatment with MET-Akt and furin-like inhibitors. Further research is warranted to understand the ACE2 function in NSCLC. 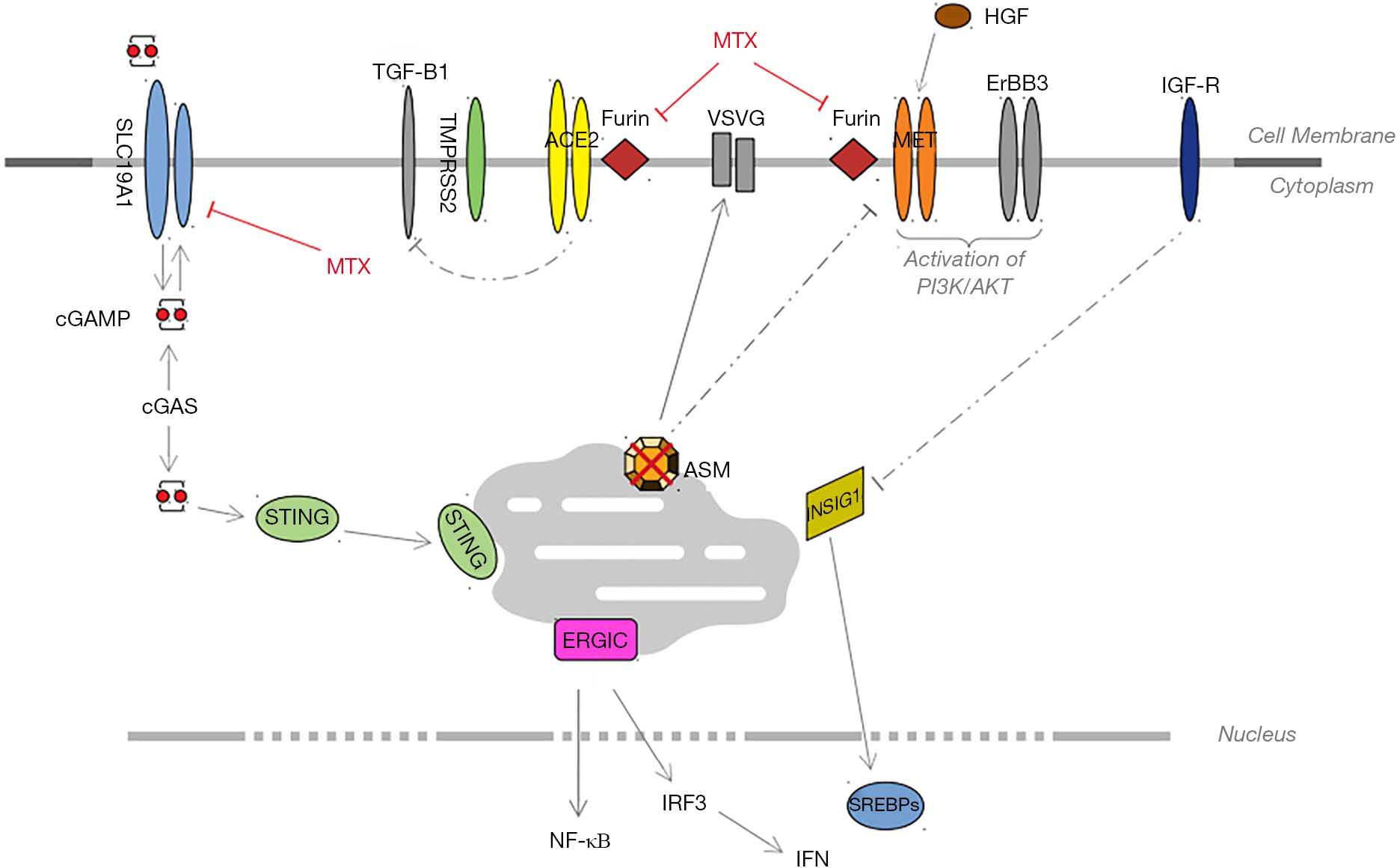 Conflicts of Interest: The authors have completed the ICMJE uniform disclosure form (available at: http://dx.doi.org/10.21037/tlcr-20-716). RR serves as an unpaid Editor-in-Chief of Translational Lung Cancer Research from June 2019 to May 2022. OA serves as an unpaid editorial board member of Translational Lung Cancer Research from Sep 2019 to Sep 2021. The other authors have no conflicts of interest to declare.