Surgically resected, pathologically confirmed NSCLC cases that were diagnosed between 2004 and 2015 with pathologic stage II–III were identified. AJCC 6th version of TNM staging system, instead of 7th or 8th versions, was used because of availability throughout the period of diagnosis. Information on age, sex, race, histology, presence or absence of chemotherapy in the first course treatment were collected. Cases where chemotherapy use was unknown were assigned into no/unknown category.

Incidence of chemotherapy was assessed according to sex (male vs. female), race (white vs. others), age (20–69 vs. 70–79 vs. 80+), year of diagnosis (2004–2009 vs. 2010–2015), histology (adenocarcinoma vs. others), and pathologic stage (II vs. III). SEER dataset does not define the timing of chemotherapy in relation to surgery, e.g., neoadjuvant, adjuvant, although it counts only for first course treatment. Information about systemic treatment for recurrent/metastatic setting was not available. Elderly patients with age 70+ were then divided into two groups (70–79 vs. 80+) for subset analyses.

This is a population study that involves no identifiable information for individuals throughout the analyses. This study was reviewed by the institutional review board and was considered exempt from human subject research.

A total of 35,009 cases were selected for the analysis. Clinical characteristics are shown in Table 1. In total, 19,951 (57.0%) patients received chemotherapy. Its use was more frequent in female, non-white race, age 20–69, year of diagnosis between 2010 and 2015, adenocarcinoma histology, and stage III groups per univariate analysis. 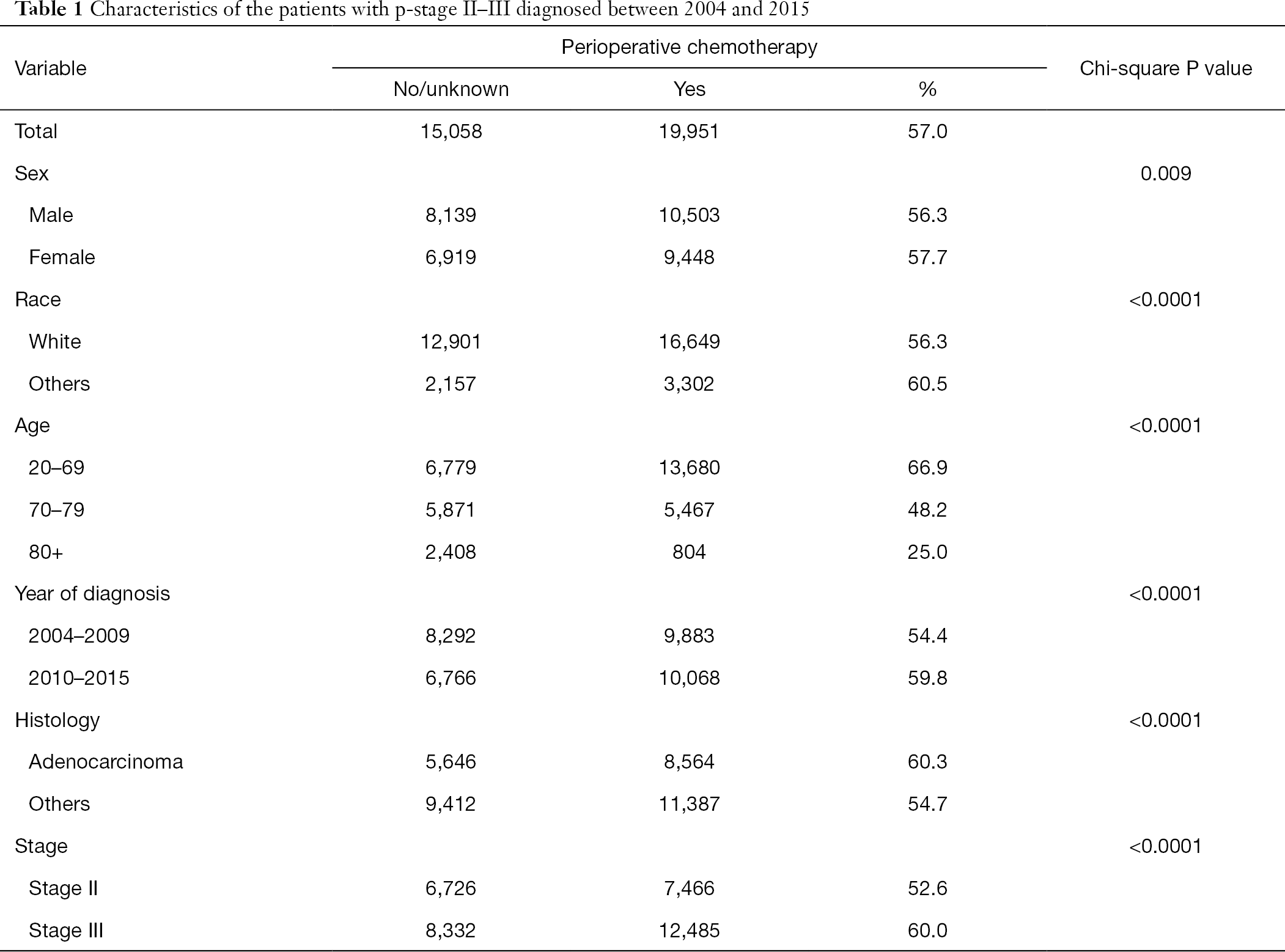 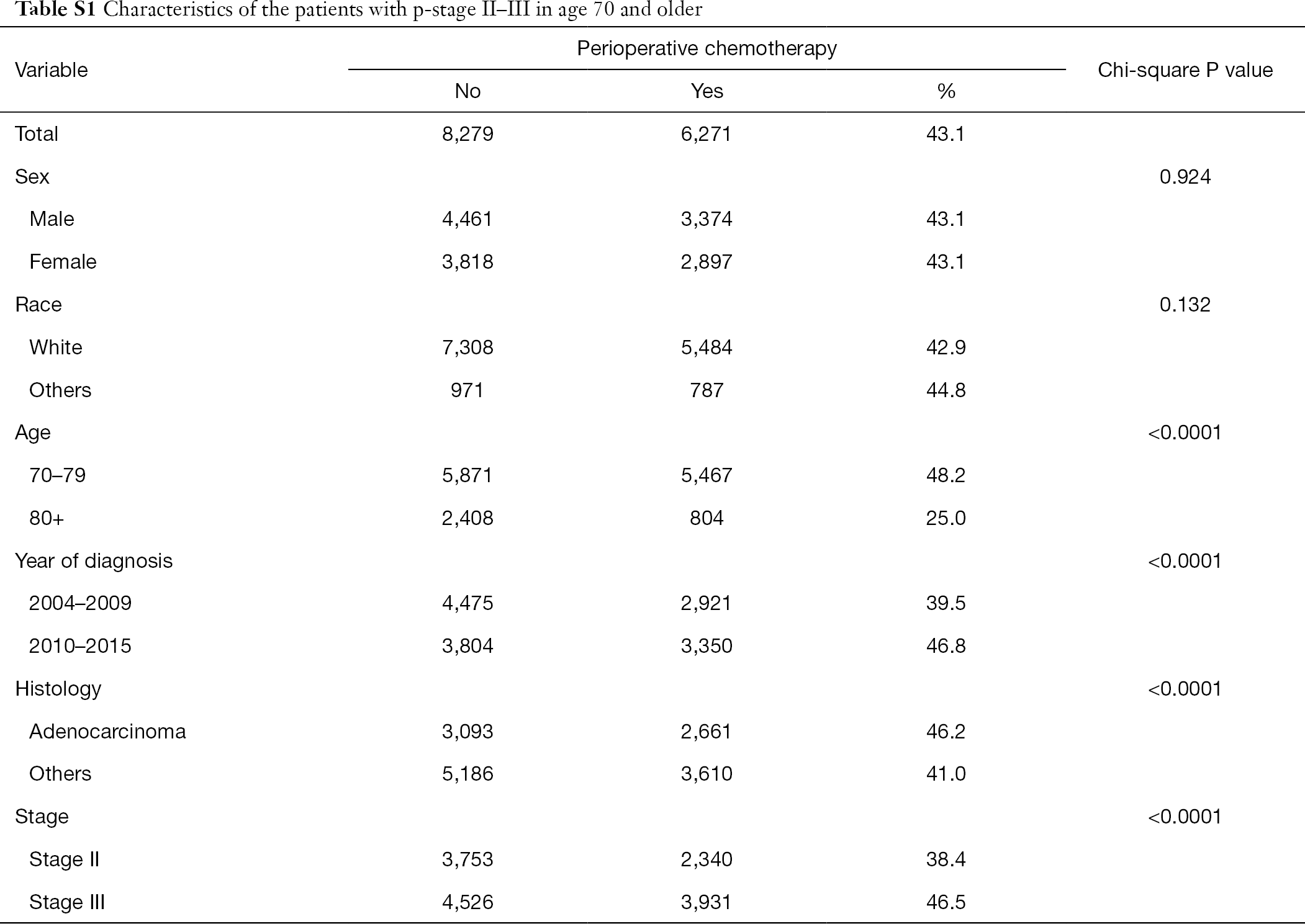 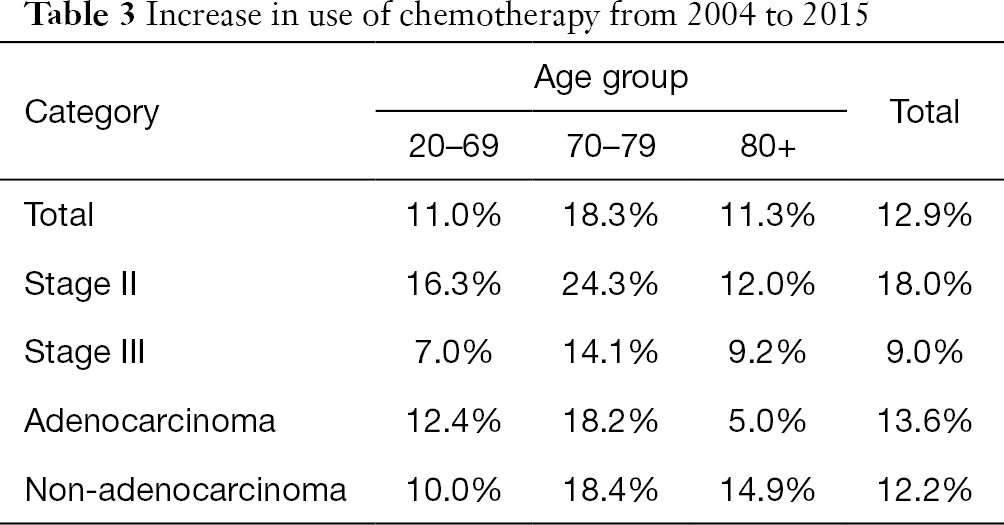 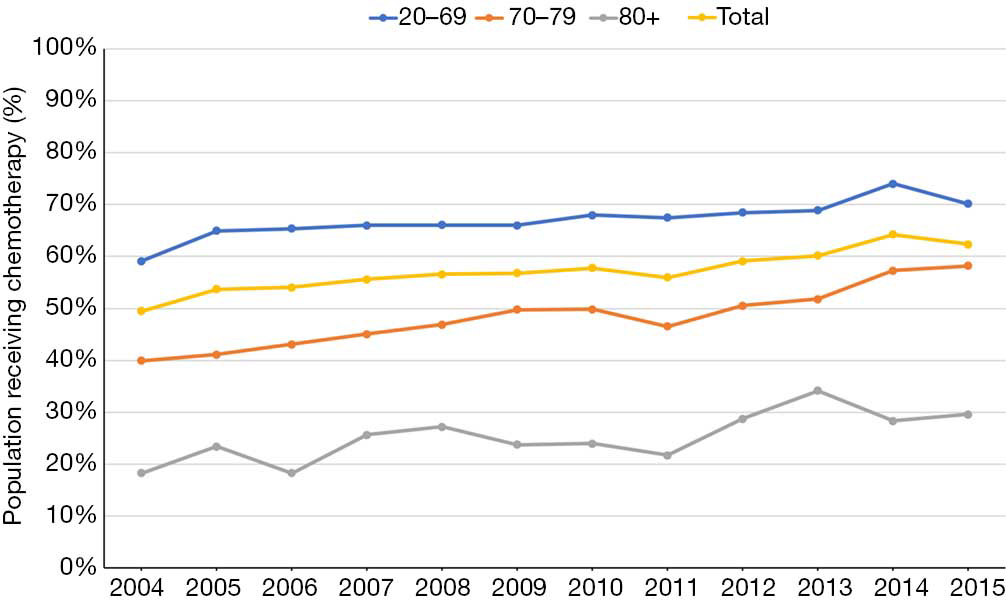 Figure 1 Trends in use of perioperative chemotherapy in stage II–III by age. The median % of population receiving chemotherapy was plotted. Total, all age groups.

Increase in use of chemotherapy in the age 70–79 group was greater than in other age groups regardless of stage or histology (Table 3, Figures 2,3). It was more prominent in stage II (24.3% increase, from 33.6% to 57.9%). In patients age 80 and older, use of chemotherapy remains low (approximately 30%) and mildly increased over the decades.

Figure 2 Trends in use of perioperative chemotherapy by stage and age. The median % of population receiving chemotherapy was plotted. (A) Stage II; (B) stage III. Total, all age groups.

Figure 3 Trends in use of perioperative chemotherapy by histology and age. The median % of population receiving chemotherapy was plotted. (A) Adenocarcinoma; (B) non-adenocarcinoma. Total, all age groups. 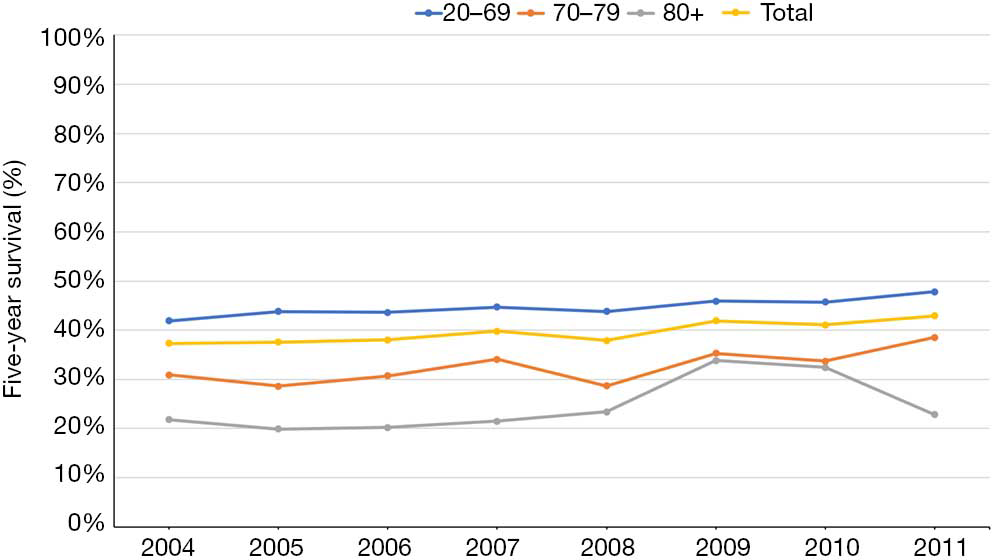 Figure 4 Trends in 5-year overall survival in stage II–III cases by age. The five-year survival rate (%) was plotted according to year of diagnosis. Total, all age groups.

Researchers design and execute trials in various clinical settings. They are expected to address clinically relevant questions to provide guidance for clinicians. However, patient selection for these studies is often skewed by patient selection based on clinical characteristics for safety reasons. Elderly populations are often underrepresented in clinical trials because physician investigators are reluctant to enroll them due to safety concerns. These patients often have poor performance status and/or significant comorbidities that might influence toxicity analyses.

Adjuvant chemotherapy became standard of care in the setting of surgically resected stage II–III and large (T ≥4 cm) stage I based on several phase III trials and meta-analyses (2-8,18-20). However, only a small number of elderly patients were enrolled in the studies. A retrospective study using SEER data showed that chemotherapy use in the age 66+ population was approximately 30–40% in 2003–2006 despite increasing since 2000 (11). Recent trends in the use of adjuvant chemotherapy have not yet been reported.

We, however, acknowledge limitations in this study. As discussed previously, the SEER dataset does not define the timing of chemotherapy in relation to surgery, e.g., neoadjuvant, adjuvant, although it was classified into the “yes” category only if chemotherapy was delivered as first course of treatment. We assume that most patients probably received adjuvant chemotherapy based on previous reports (12). We did not exclude patients who died within the immediate post-surgical period. No detailed information about chemotherapy (e.g., number of cycles or regimens) was available. The analyses in this study were intended to review populations in the US for which Caucasians dominate. Trends in other ethnic groups or nations are unknown.

The use of the AJCC 6th version of staging system may limit the interpretation. Because SEER adopted the AJCC 7th version in 2010, cases prior to 2010 have never been staged based on the 7th version. We therefore were limited to use of the 6th version due to its consistent availability throughout the study period. Major differences between the 6th and 7th versions in surgical N0 cases were tumors with T >7 cm (T2/stage IB vs. T3/stage IIB, n=457) and T=5–7 cm (T2/stage IB vs. T2b/stage IIA, n=1,016), respectively (21). These tumors will be classified as stage II or III in the 8th edition requiring adjuvant chemotherapy. These cases staged as stage I according to 6th edition were not included in the current analysis. However, previous adjuvant trials using the 6th version demonstrated chemotherapy benefit in node positive cases. Because all the three versions of AJCC staging systems take N1+ for stage II and higher, most cases that benefit from chemotherapy in the 6th version remain stage II–III.

We thank the Parkview Research Center for administrative support.

Conflicts of Interest: All authors have completed the ICMJE uniform disclosure form (available at http://dx.doi.org/10.21037/tlcr-19-564). TK reports personal fees from Merck and Boehringer Ingelheim outside the submitted work. The other authors have no conflicts of interest to declare.

Ethical Statement: The authors are accountable for all aspects of the work in ensuring that questions related to the accuracy or integrity of any part of the work are appropriately investigated and resolved. Institutional Review Board at Augusta University gave exemption because the study was deemed not to constitute human subject research.