Time to death has been calculated from the first day of radiotherapy. Univariate analyses of survival were performed with the Kaplan-Meier-method and the log-rank test. The potential prognostic factors that were significantly (P<0.05) associated with survival on univariate analyses were subsequently included in a Cox regression analysis. Those factors that were significant (P<0.05) or showed a trend (P≤0.10) in the Cox regression analysis were used to create the scoring system for estimation of survival.

All procedures performed were in accordance with ethical standards and the Helsinki declaration from 1964 as revised in 2013. The study was approved by an institutional review board (IRB), namely the Ethics Committee of the University of Lübeck, (reference number 18-254A). Due to its retrospective design, informed consent specifically for this study was not required by the IRB. For protection of to the patient’s personal data, only anonymized data have been used for the analyses of this study. 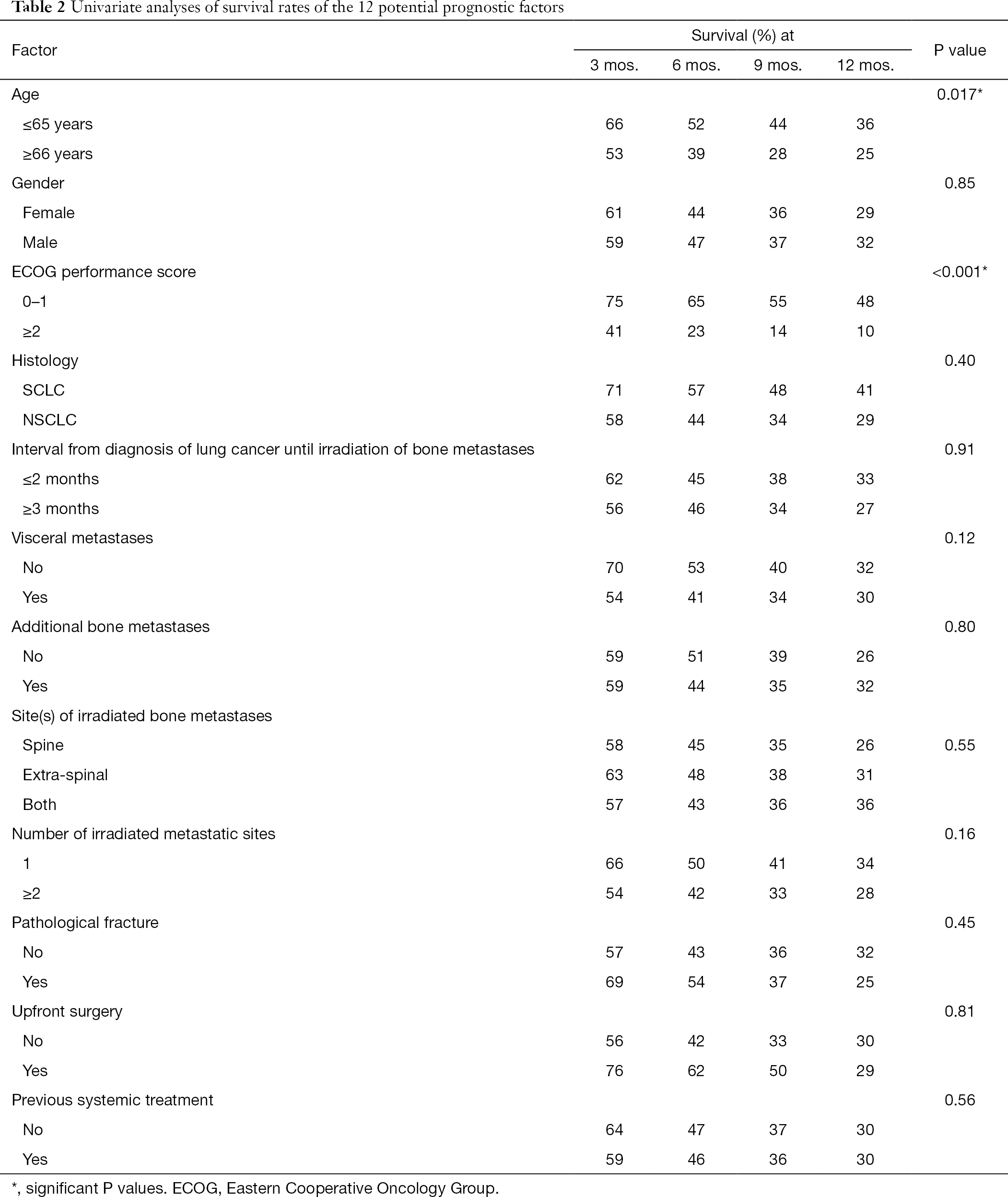 Both factors were used to create the scoring system for estimation of survival. The following scoring points were assigned: age ≤65 years =1 point, age ≥66 years =0 points, ECOG performance score of 0–1 =1 point, and ECOG performance score of ≥2 =0 points. Thus, three prognostic groups were obtained, i.e. 0 points (n=38), 1 point (n=71) and 2 points (n=44). The survival rates of these groups at 3, 6, 9 and 12 months are summarized in Table 3, and the corresponding Kaplan-Meier curves are given in Figure 1. 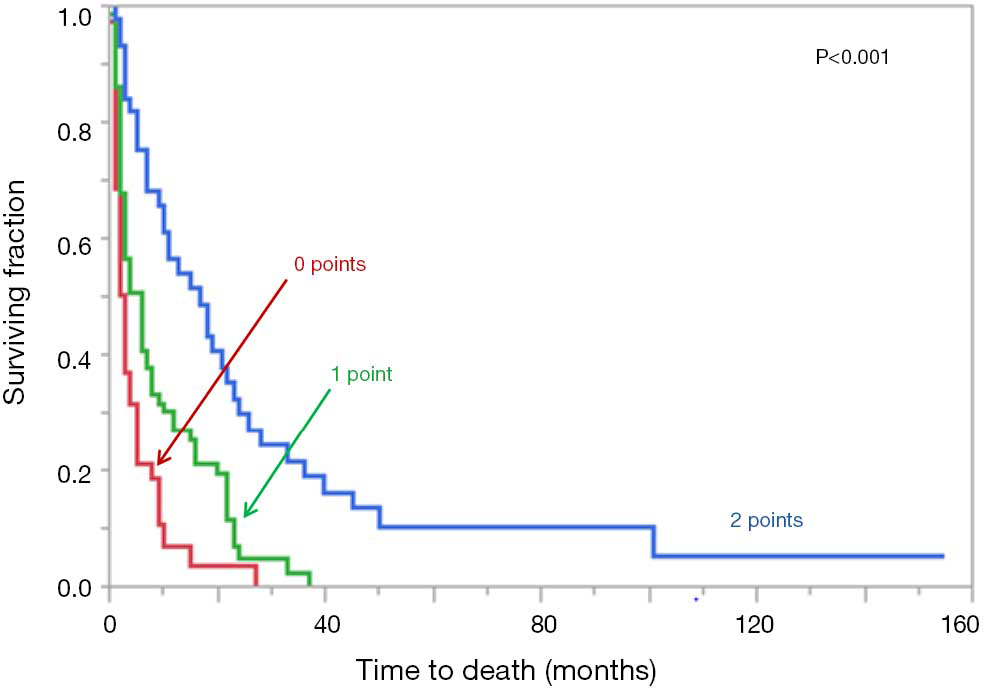 Figure 1 Kaplan-Meier curves for survival of the prognostic groups 0 points, 1 point and 2 points. The P value was calculated using the log-rank test.

The survival prognoses of patients irradiated for bone metastases vary between a few weeks and several years. This should be taken into account when tailoring a treatment regimen to an individual patient. Patients with uncomplicated painful bone metastases, i.e., without a pending or existing pathological fracture, metastatic epidural spinal cord compression or an extensive soft-tissue component, and a short survival time appear optimally treated with single-fraction radiotherapy such as 1×8 Gy or 1×10 Gy (2-7). This regimen would allow the patients to spend more time without treatment for other important issues. Reviews and meta-analyses of randomized trials demonstrated single-fraction radiotherapy to be as effective in relieving pain as multi-fraction radiation regimens (3-7). Fifteen years ago, Sze et al. presented a systematic review of 11 trials and 3,435 patients with uncomplicated painful bone metastases (6). The overall pain response rates were 60% after single-fraction and 59% after multi-fraction radiotherapy, respectively (odds ratio: 1.03, 95% confidence interval: 0.89–1.19). Complete pain relief was achieved in 34% and 32% of the patients, respectively (odds ratio: 1.11, 95% confidence interval: 0.94–1.30). More recently, Chow et al. presented an updated systematic review that included 25 randomized trials with a total of 5,617 patients with bone pain from uncomplicated metastases (7). Overall pain relief was achieved in 60% of patients after single-fraction radiotherapy compared to 61% after multi-fraction treatment (P=0.36). Complete pain relief rates were 23% and 24%, respectively (7).

The systematic reviews revealed that re-treatment of the same bone metastases was required significantly more often after single-fraction than after multi-fraction radiotherapy. In the review of Sze et al., the re-treatment rates were 21.5% and 7.4%, respectively (odds ratio: 3.44, 95% confidence interval: 2.67–4.43) (6). In the updated review of Chow et al., the re-treatment rates were 20% and 8%, respectively (P<0.00001) (7). Moreover, a randomized trial demonstrated that re-calcification of the osteolytic bone was significantly more pronounced after 10×3 Gy over 2 weeks than after 1×8 Gy (173% vs. 120%, P<0.0001) (8). Since re-calcification takes time and can generally be expected only several months following radiotherapy, it becomes more of an issue in longer-term survivors (2). Also the risk of recurrent bone pain in the irradiated regions rises with lifetime. Therefore, patients with bone metastases and favorable survival prognoses appear better treated with multi-fraction radiotherapy. It has been shown for patients with vertebral bone metastases associated with spinal cord compression and favorable survival prognoses that radiotherapy with total doses beyond 30 Gy (e.g., 15×2–15×5 Gy or 20×2 Gy) resulted in improved local control (12). If these findings can be transferred to patients with bone metastases without spinal cord compression, one may consider using longer-course radiotherapy with doses beyond 30 Gy also for long-term survivors of this group.

To be able to select the most appropriate dose-fractionation regimen and to avoid over- or under-treatment, it would be very helpful if one could predict an individual patient’s survival time prior to the start of treatment. A few scoring system already exist for patients irradiated for bone metastases (13-16). However, these tools were developed in cohorts of patients with many different primary tumor types. In order to account for the individual biology and other individual characteristics of a particularly tumor type, specific scoring systems for single tumor entities would be important. In the current study, a scoring system has been developed specifically for bone metastases from lung cancer. Based on the prognostic factors age and performance status, which can be assessed easily and fast, three prognostic groups were designed. Patients with 0 points had poor survival prognoses; only 37% and 21% of the patients survived for 3 and 6 months, respectively. Thus, patients of this group with symptomatic bone metastases appear good candidates for single-fraction radiotherapy. Patients with 1 point had an intermediate survival prognosis with 41% of the patients surviving for 6 months and 27% for 12 months. They may be considered for multi-fraction radiotherapy of intermediate duration, for example with 10×3 Gy. Patients with 2 points had the most favorable survival prognoses with 75% surviving for 6 months and 56% for 12 months. These patients may be candidates for longer-course radiotherapy with total doses beyond 30 Gy. However, when considering these suggestions, one should bear in mind the retrospective design of this study. Although only patients treated with longer-course multi-fraction radiotherapy were included to reduce the risk of a selection bias due to the dose-fractionation regimen, the risk of hidden selection biases still exists. The findings of this study may not be applicable to patients treated with single-fraction or short-course multi-fraction irradiation, because these patients were not included. Moreover, it has to be noticed that patients with complicated bone metastases should always be considered for multi-fraction radiotherapy (2).

The new scoring system including three prognostic groups may help estimating the lifespan of lung cancer patients to be irradiated for bone metastases. It can be used easily and fast during clinical routine. It may be useful for physicians when tailoring the treatment regimen to the individual. Moreover, it can be valuable in the stratification of patients with bone metastases from lung cancer in future trials.

Conflicts of Interest: All authors have completed the ICMJE uniform disclosure form (available at http://dx.doi.org/10.21037/tlcr-19-642). DR reports personal fees from Elsevier, personal fees and non-financial support from Roche Pharma, Bristol Myers Squibb, Astra Zeneca, Bayer HealthCare, Novartis Oncology, Amgen, Janssen-Cilag, MerckSerono outside the submitted work. SES reports personal fees from Noxopharm, other from UpToDate outside the submitted work. The other authors have no conflicts of interest to declare.

Ethical Statement: The authors are accountable for all aspects of the work in ensuring that questions related to the accuracy or integrity of any part of the work are appropriately investigated and resolved. All procedures performed were in accordance with ethical standards and the Helsinki declaration from 1964 as revised in 2013. The study was approved by an institutional review board (IRB), namely the Ethics Committee of the University of Lübeck, (reference number 18-254A). Due to its retrospective design, informed consent specifically for this study was not required by the IRB. For protection of to the patient’s personal data, only anonymized data have been used for the analyses of this study.