For patients with advanced lung adenocarcinoma (LADC), the discovery of epidermal growth factor receptor (EGFR) mutations and their sensitivity to tyrosine kinase inhibitors (TKIs) changed the landscape of treatment regimens (1-3). So far, gefitinib, erlotinib and afatinib are still the best choice for first-line treatment of patients with EGFR mutations in non-small cell lung cancer (NSCLC) (4) However, acquired resistance usually occurs 10–12 months after treatment with EGFR-TKIss. Third-generation EGFR-TKIs can specifically target EGFR-T790M and EGFR activation mutations and show significant activity in EGFR-T790M positive NSCLC patients with acquired drug resistance (5,6). Unfortunately, resistance to the third-generation EGFR-TKIs is also inevitable. Some studies have demonstrated that by quantifying EGFR mutation alleles the response to EGFR-TKIs can be predicted (7,8), and others have shown that different EGFR mutations can affect the prognosis of patients who receive EGFR-TKI treatment (9,10). However, this approach does not address the potential risk of co-occurring genetic alterations in cancer, but rather excludes a “driving factor” from other factors. Existing studies have suggested that the current single-gene driver-oncogene viewpoint needs to be reviewed, and clinical outcomes should be related to accompanying genetic changes in patients with advanced lung cancer such as EGFR mutation (11-13). At present, the prevalence of co-occurring genetic changes affecting clinical outcomes in advanced lung cancer with major carcinogenic drivers is largely unknown. Therefore, to optimize clinical outcomes of EGFR-TKI therapy, a better understanding of the underlying mechanism of this phenomenon is needed.

Dynamic monitoring of tumor genomic profiles is of great importance to the diagnosis, treatment, and prognosis of patients with NSCLC (14,15). To better identify these underlying mechanisms, we performed mutation profiling analysis on 36 plasma samples of NSCLC lung adenocarcinoma before further treatment, and targeted 556 cancer-related genes using next-generation sequencing.

We present the following article in accordance with the STROBE reporting checklist (available at http://dx.doi.org/10.21037/tlcr-20-679).

Thirty-six patients who were initially diagnosed with lung adenocarcinoma at the Affiliated Hospital of Guangdong Medical University between May, 2017 and December, 2019 were enrolled. And their medical records were retrospectively reviewed. Table 1 shows a summary of the patients’ clinical characteristics.

This study was approved by the Ethics Committee of the Affiliated Hospital of Guangdong Medical University. Informed consent was obtained from all patients who underwent blood genetic analysis. All procedures performed in this study were in accordance with the Declaration of Helsinki (as revised in 2013).

Progression-free survival (PFS) was defined as the duration from the initiation of EGFR-TKI treatment to disease progression or death from any cause. Clinical follow-up assessments took place every four weeks. Tumor response was evaluated by experienced researchers based on the RECIST guidelines (version 1.1), and was divided into complete response (CR), partial response (PR), stable disease (SD), or progressive disease (PD). The cut-off date for analysis was February, 25, 2020.

A total of 36 patients were enrolled and included in this retrospective study. Pathology revealed all cases were adenocarcinoma (100%, 36/36). The most common EGFR activating alterations were 19del (50%, 18/36) and L858R (47.22%, 17/36). Most patients (97.22%, 35/36) received first/second-generation EGFR-TKIs as first-line therapy. We performed mutation profiling analysis on 36 plasma samples of NSCLC lung adenocarcinoma and targeted 556 cancer-related genes using next-generation sequencing. EGFR T790M mutation was present in the plasma samples of 13 (36.11%) patients, obtained prior to third-generation EGFR-TKI treatment. In addition, 19 (52.78%) patients were EGFR 19 deletion-positive, 20 (55.56%) were EGFR 21 L858R mutation-positive, and 17 (47.22%) patients had multiple EGFR mutations detected prior to further treatment. The clinical characteristics of the 36 patients included in the retrospective analysis are shown in Table 1. 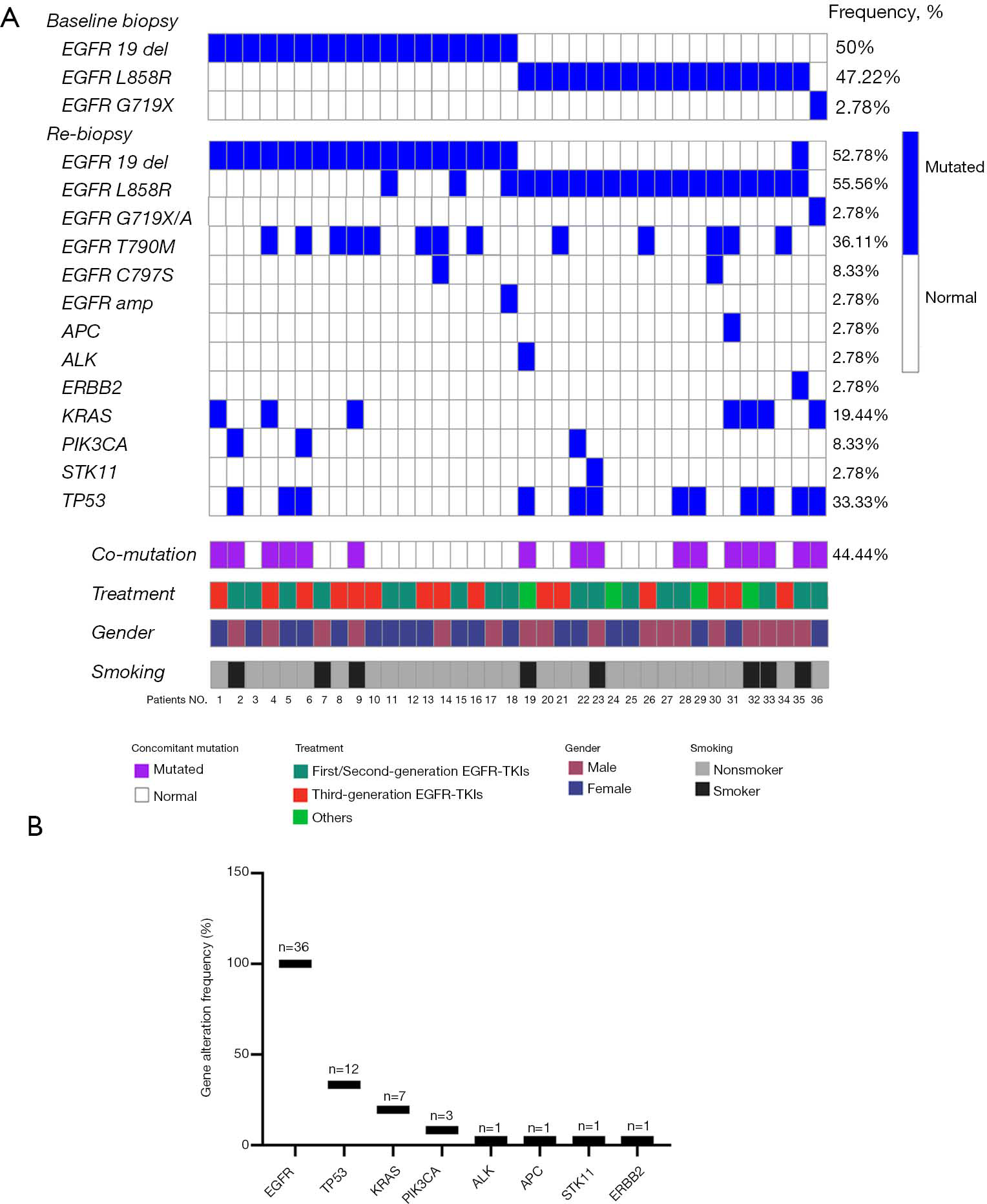 Figure 1 Genetic alteration profiles in patients with epidermal growth factor receptor (EGFR)-mutant non-small cell lung cancer (NSCLC) who were initially treated with tyrosine kinase inhibitors (TKIs). (A) Targeted next-generation sequencing in plasma from 36 NSCLC patients with EGFR mutations found in tumor tissues. A total of 556 cancer-related genes were covered by the sequencing. (B) The alterations most frequently identified by plasma next generation sequencing (NGS). 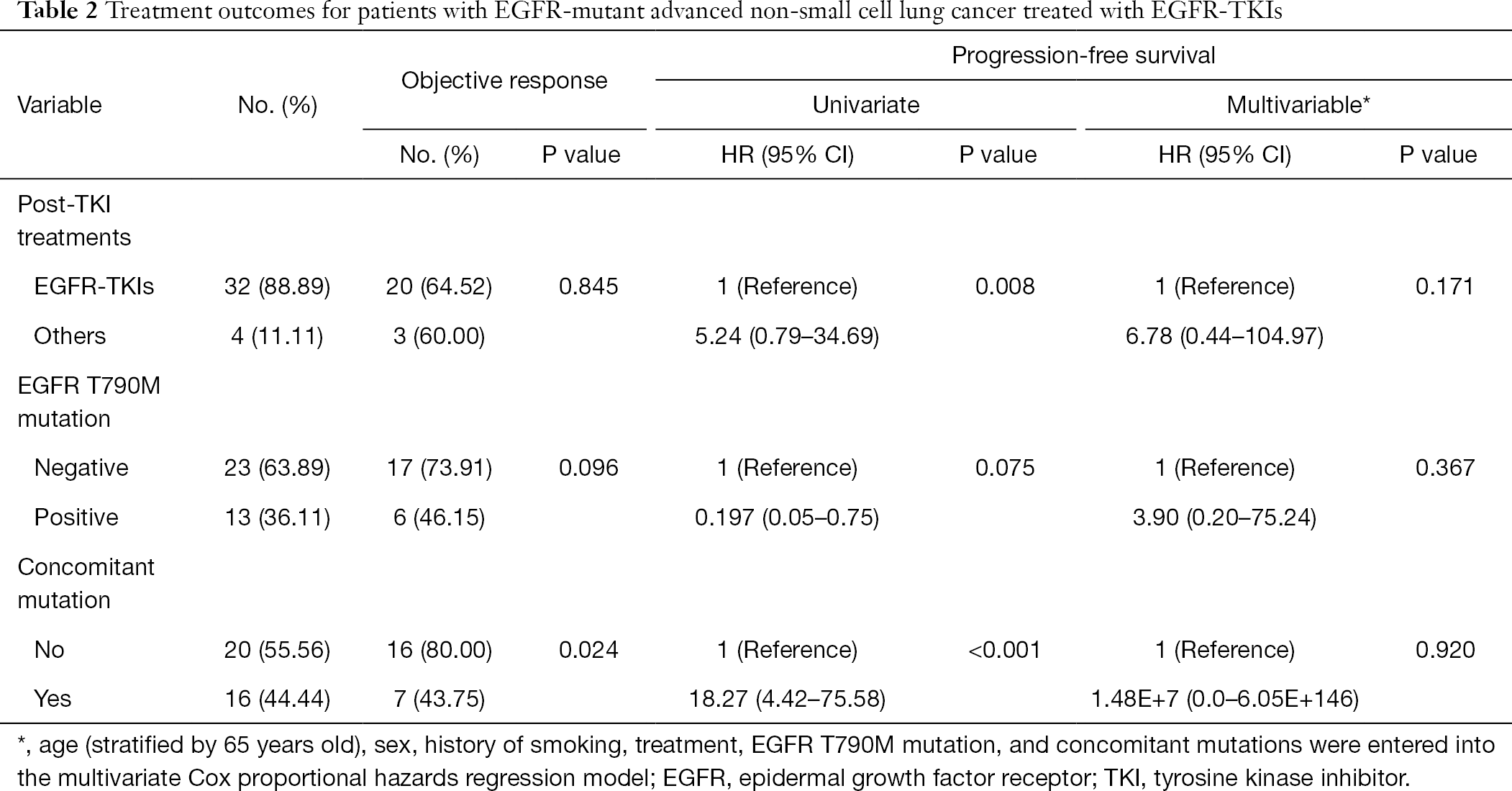 Figure 3 Progression-free survival (PFS) analysis. (A) Kaplan-Meier curves of PFS in patients who received third-generation epidermal growth factor receptor-tyrosine kinase inhibitor (EGFR-TKI) therapy or other treatments, mainly including patients with T790M mutations. (B) Kaplan-Meier curves of PFS for patients who received third-generation EGFR-TKI treatment with and without concomitant mutations. 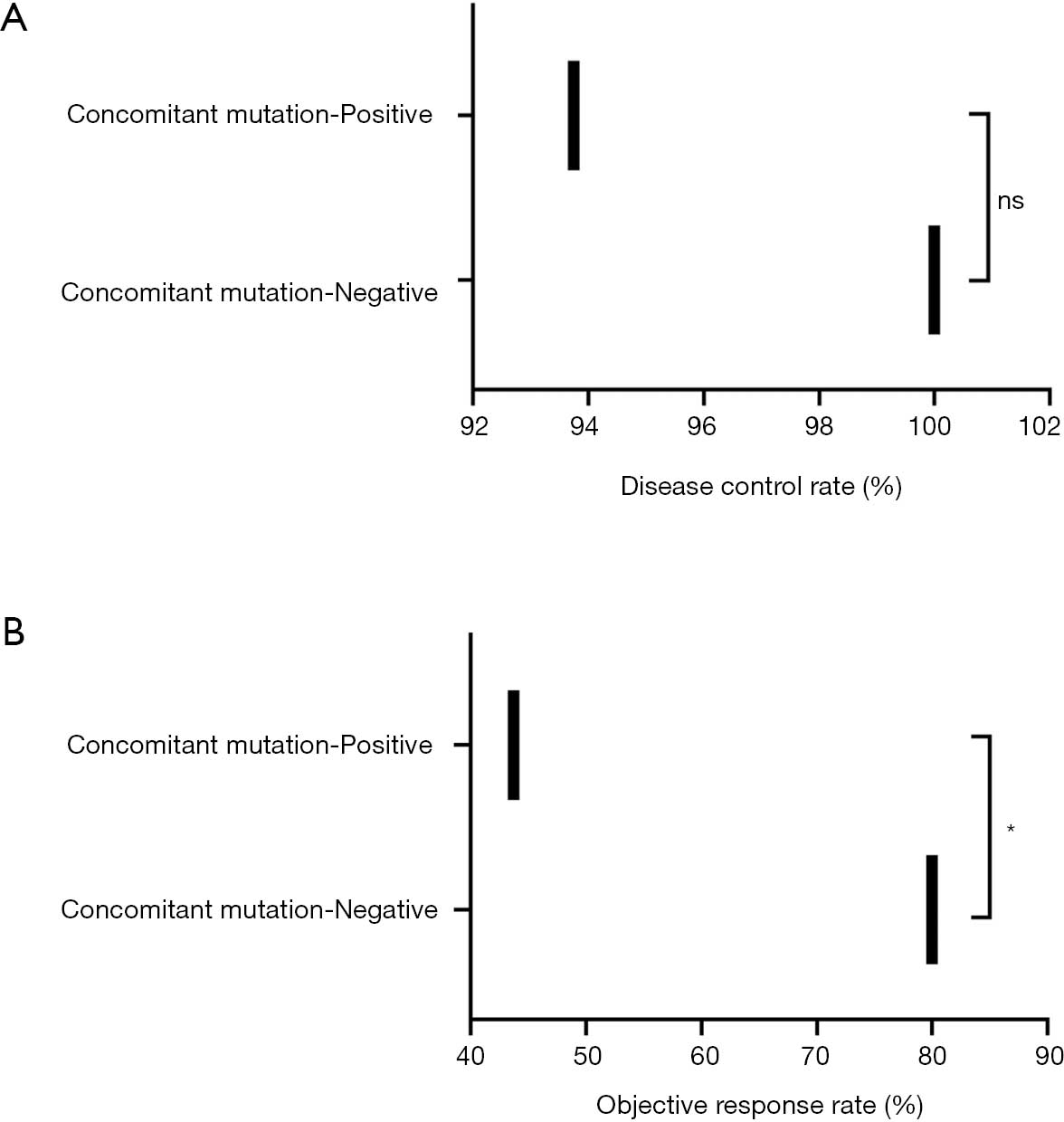 Figure 4 The treatment outcomes of non-small cell lung cancer (NSCLC) patients with and without concomitant mutations. (A) Analysis of the disease control rate. (B) Analysis of the objective response rate. ns, no significant difference; *, P<0.05.

Molecular screening is crucial in choosing suitable EGFR-TKI therapy for patients with EGFR activating mutations. As a number of studies have shown, the rapid development of gene sequencing technology has opened the door for the broad application of dynamic monitoring of tumor driver genes in tumor diagnosis and treatment, including in identifying tumor genome maps, monitoring treatment responses, detecting early drug resistance, and predicting prognosis (19). This study retrospectively analyzed data from 36 patients with lung adenocarcinoma who were diagnosed with EGFR mutation after receiving first-line EGFR-TKI. The dynamic monitoring of tumor genomic profiles was performed on plasma samples from the patients, and 556 cancer-related genes were targeted using next-generation sequencing before the patients underwent further TKI treatment. The results show that advanced NSCLC patients with EGFR mutation have extensive co-mutations supported previous report (20). Furthermore, genetic covariation was found to have a negative impact on the response and survival of patients who received first-line EGFR-TKI treatment, which may be attributed to bypass activation of survival signaling pathways or tumor heterogeneity.

Several previous studies have investigated the relationship between co-occurring genetic changes and response and survival (11,20,21). These studies challenge the single driver oncogene perspective and reveal the potential function of concomitant genetic changes as an auxiliary driver of tumor progression. In the present study, 44.4% of patients harbored concomitant mutations, which were significantly associated with poorer objective response rate and PFS. The result is consistent with previous studies, suggesting that concomitant driver gene mutations play an important role in tumor progression and drug resistance, and may be a very important factor affecting clinical outcomes. However, in multivariate analysis, concomitant mutations were not significantly associated with PFS, which indicates that the adverse treatment results caused by concomitant mutations may be interfered by other factors. Interestingly, we also found a significantly higher incidence of concomitant mutations in patients who had a history of smoking. Moreover, the presence of the EGFR T790M mutation after first-generation EGFR TKI treatment was also significantly associated with greater efficacy of third-generation EGFR TKIs (the data was not shown), which provides a rationale for the superiority of third-generation EGFR TKI therapy over other types of therapy and the significance of molecular diagnosis in NSCLC progressive disease. Similar to the T790M mutation, C797S appears in EGFR exon 20, which determines that cysteine is replaced by serine at position 797. Several authors have documented that the appearance of C797S with negative T790M could maintain sensitivity to EGFR inhibitors, but not in T790M-positive cells in a preclinical setting (22,23). In our study, two patients had C797S accompanied by the T790M mutation, which suggests a possible correlation with poor response to third-generation TKI therapy. In addition, the activation of known by-pass signaling pathways as a mechanism of resistance was represented in our cohort by one patient who had STK11 mutation, three patients who had KRAS mutation, and one patient who had ERBB2 amplification. STK11 mutation presented in our study in only one patient, which has been reported as a mediator of the cold tumor immune microenvironment and a major driver in primary resistance to PD-1 axis inhibitors in non-squamous lung adenocarcinoma (24). KRAS activating mutations appear in patients treated with first-generation EGFR-TKIs and are considered to be a potential mechanism for EGFR-TKIs (25). Inhibition of EGFR by osimertinib may functionally deplete the carcinogenic EGFR signal to a level that can cause KRAS mutant cells to appear (26,27). Concurrent ERBB2 (HER2) is a rare, independent predictor of shorter progression time with EGFR TKI treatment. Owing to their clinical availability, HER2 inhibitors may be particularly clinically feasible. In the specimens obtained after EGFR TKI resistance, the copy number changes of ERBB2 were also enriched (28).

Our primary and subsequent biopsies, using tumor tissue and blood-derived ctDNA, respectively, detected, and identified potential actionable changes, particularly in relation to EGFR-sensitive mutations. Exon 18 G719X mutation is a less common EGFR-TKIs sensitizing mutation. It occurred in only one patient in our study (1/36, 2.8%), which was similar to the reported 3% incidence of EGFR mutations (29). Aside from four patients with 19del and 21 L858R co-mutations, there appeared to be high consistency between tissue ARMS PCR and ctDNA NGS. Compared with traditional detection methods, NGS technology is more efficient and has higher throughput for through tissue and blood samples, which can simultaneously detect point mutations, insertions, rearrangements and copy number mutations, and mutation abundance, and perform quantitative detection. It also saves financial resources and time in large-scale sequencing. Conventionally, tissue biopsies have been used to assess the mechanisms of acquired drug resistance (30). However, since re-biopsy is an invasive procedure, it is not always feasible and accepted by patients, and it cannot explain the heterogeneity of drug resistance mechanisms in different tumor sites of the same patient, so it has some limitations. Moreover, blood-derived ctDNA, also known as liquid biopsy, was a non-invasive option. Molecular analysis of the plasma collected during the onset of disease can provide timely monitoring of the disease response. Emerging studies have enhanced the prognostic significance of plasmatic mutational analysis in third-generation EGFR-TKIs candidate patients (31-33). Thus it is suggested that liquid biopsy technique is a powerful complement to tissue specimens and deserves further in-depth analysis, especially in first-line setting perspective.

This study has several limitations. First, the sample size was too small. Second, patients who received different lines of TKI treatment were included in the analysis. Third, data from our next-generation sequencing hotspots (excluding some other alterations, copy number changes, or chromosomal abnormalities) may have caused concomitant mutations to be underestimated.

In conclusion, the findings of this study emphasize the importance of using multiple molecular profiles. Concomitant genetic alterations were significantly associated with response to EGFR targeted therapy in patients with NSCLC, and may serve as an important negative predictor of TKI treatment response in patients with EGFR sensitive mutations. Therefore, research on multi-drug or sequential therapy must be urgently carried out to address the covariation that drives drug resistance.

Funding: The study was supported by the Competitive Distribution Projects of Zhanjiang Science and Technology Development Special Fund (2018A010220), and sponsored by Shanghai Tongshu Biotechnology Co., Ltd.

Reporting Checklist: The authors have completed the STROBE reporting checklist. Available at http://dx.doi.org/10.21037/tlcr-20-679

Conflicts of Interest: All authors have completed the ICMJE uniform disclosure form (available at http://dx.doi.org/10.21037/tlcr-20-679). The authors have no conflicts of interest to declare.

Ethical Statement: The authors are accountable for all aspects of the work in ensuring that questions related to the accuracy or integrity of any part of the work are appropriately investigated and resolved. This study was approved by the Ethics Committee of the Affiliated Hospital of Guangdong Medical University (No. YJ2017062-1). Informed consent was obtained from all patients who underwent blood genetic analysis. All procedures performed in this study were in accordance with the Declaration of Helsinki (as revised in 2013).