Development of the T790M resistance mutation in exon 20 of the EGFR gene is the major mechanism of acquired resistance, accounting for approximately 60% of treatment failure after the use of first-generation and second- generation EGFR-TKIs. MET amplification is another important mechanism detected in approximately 5% to 22% of relapsed patients. In recognition of this challenge, third-generation EGFR-TKIs, such as osimertinib (TAGRISSO or AZD9291), rociletinib (CO1686), olmutinib (HM61713), nazartinib (EGF816), naquotinib (ASP8273), mavelertinib (PF-0647775), and AC0010, have been developed that selectively and irreversibly inhibit EGFR carrying the common “sensitive” mutations, 19del and L858R, and the resistant T790M mutation while sparing wild-type (WT) EGFR.

In this study, 90 patients with EGFR gene mutation-positive advanced lung adenocarcinoma treated in Shanghai Chest Hospital from January 2017 to December 2018 were analyzed retrospectively.

We present the following article in accordance with the STROBE reporting checklist (available at http://dx.doi.org/10.21037/tlcr-20-685). 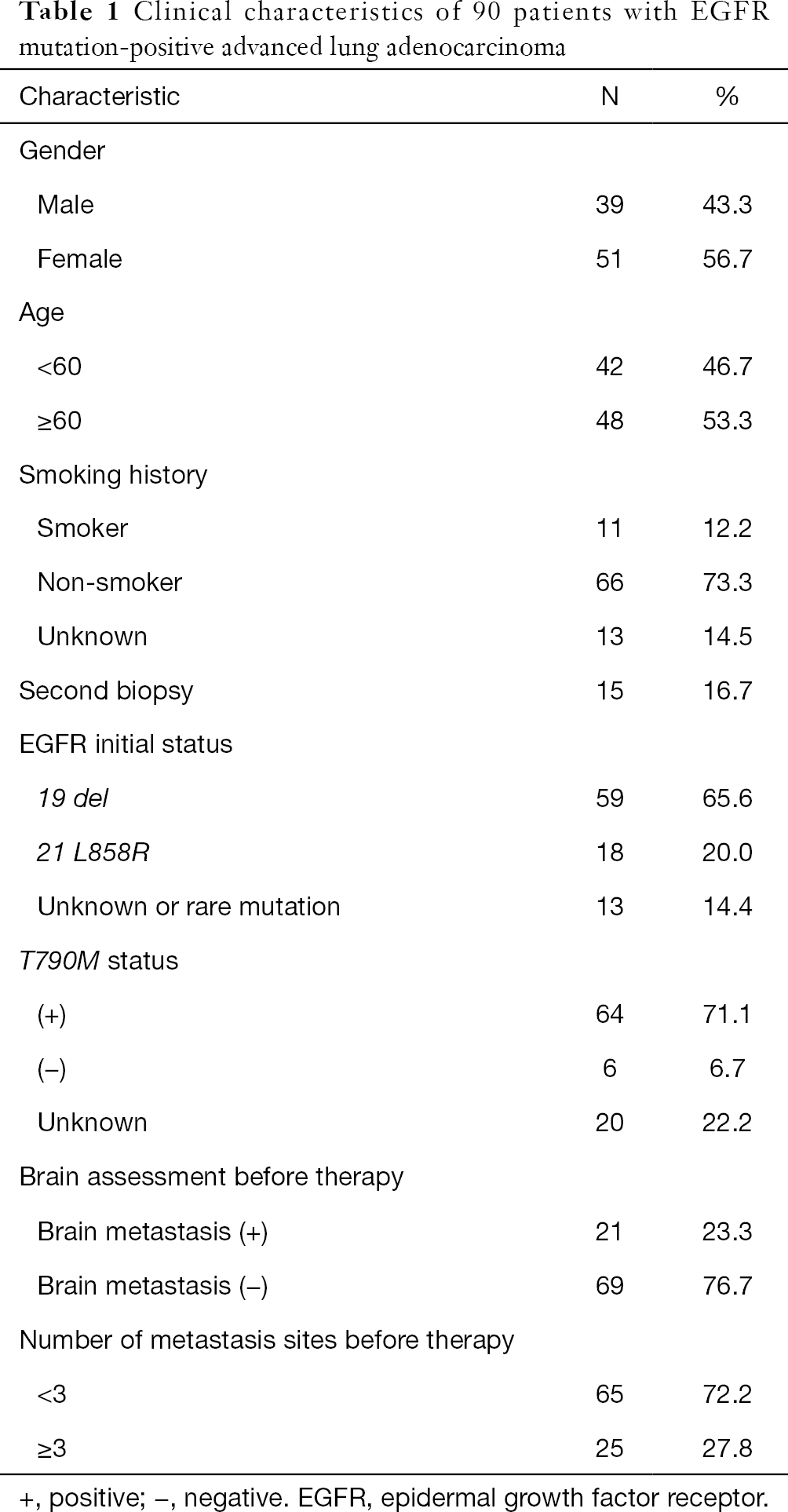 The administration plan was oral osimertinib (80 mg) once a day until tumor progression or intolerable adverse reactions. The patient did not receive any other systemic antitumor therapy during the treatment with osimertinib.

Four weeks after the initial oral administration of osimertinib, the patients were reexamined with chest computed tomography (CT) to evaluate the therapeutic effect. Routine blood and liver and kidney function tests were conducted regularly during the administration period. Chest imaging examination was carried out regularly and outpatient follow-up was carried out on time. Patients who failed to receive outpatient service were followed up regularly by telephone.

The study was conducted in accordance with the Declaration of Helsinki (as revised in 2013). Because of the retrospective nature of the research, the requirement for ethical approval and informed consent was waived.

SPSS statistics version 22 software was used for statistical analysis. The survival analysis of PFS and OS was calculated by Kaplan-Meier method. The comparison between different groups was performed by log-rank test. A P value <0.05 was considered to indicate significant difference. 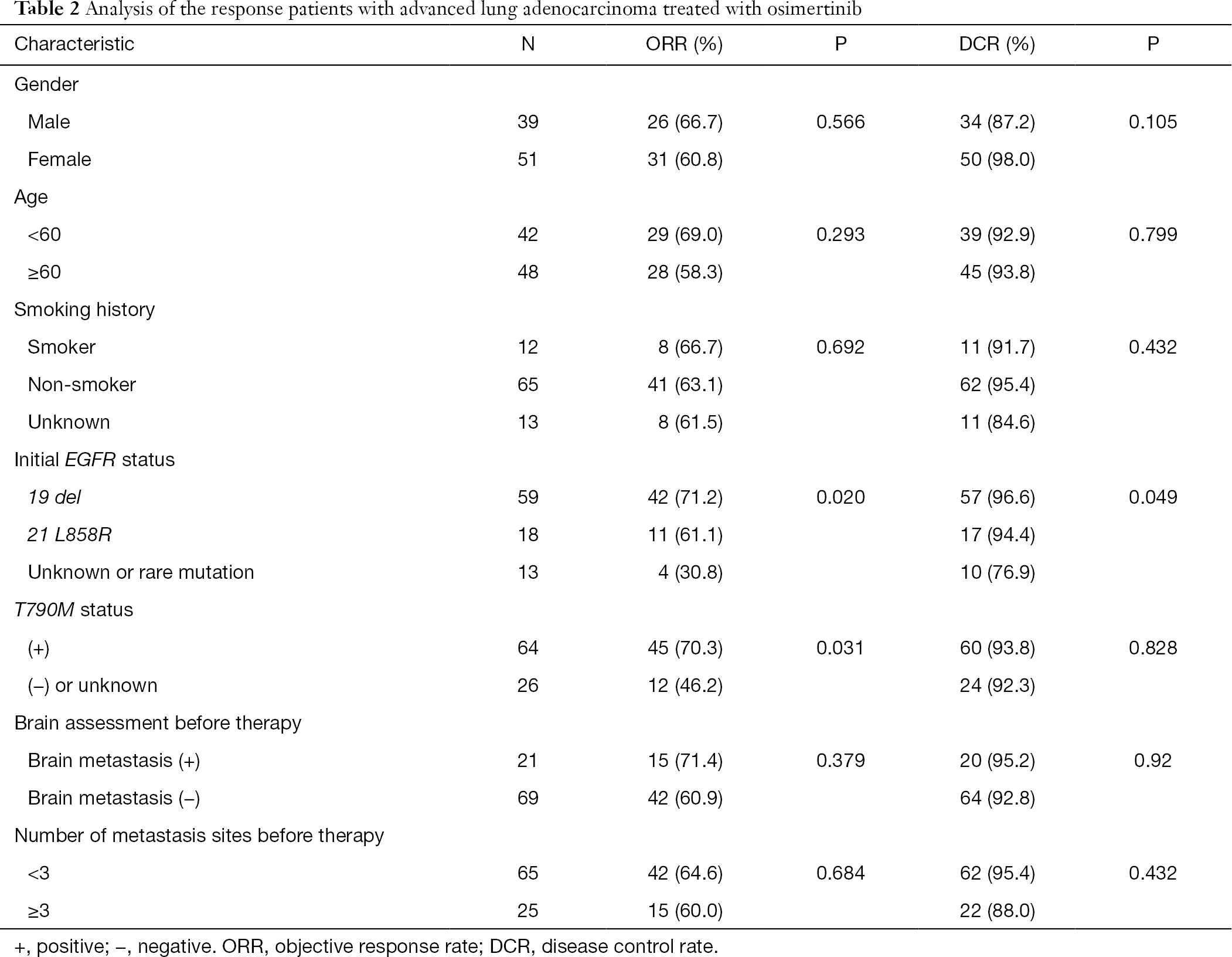 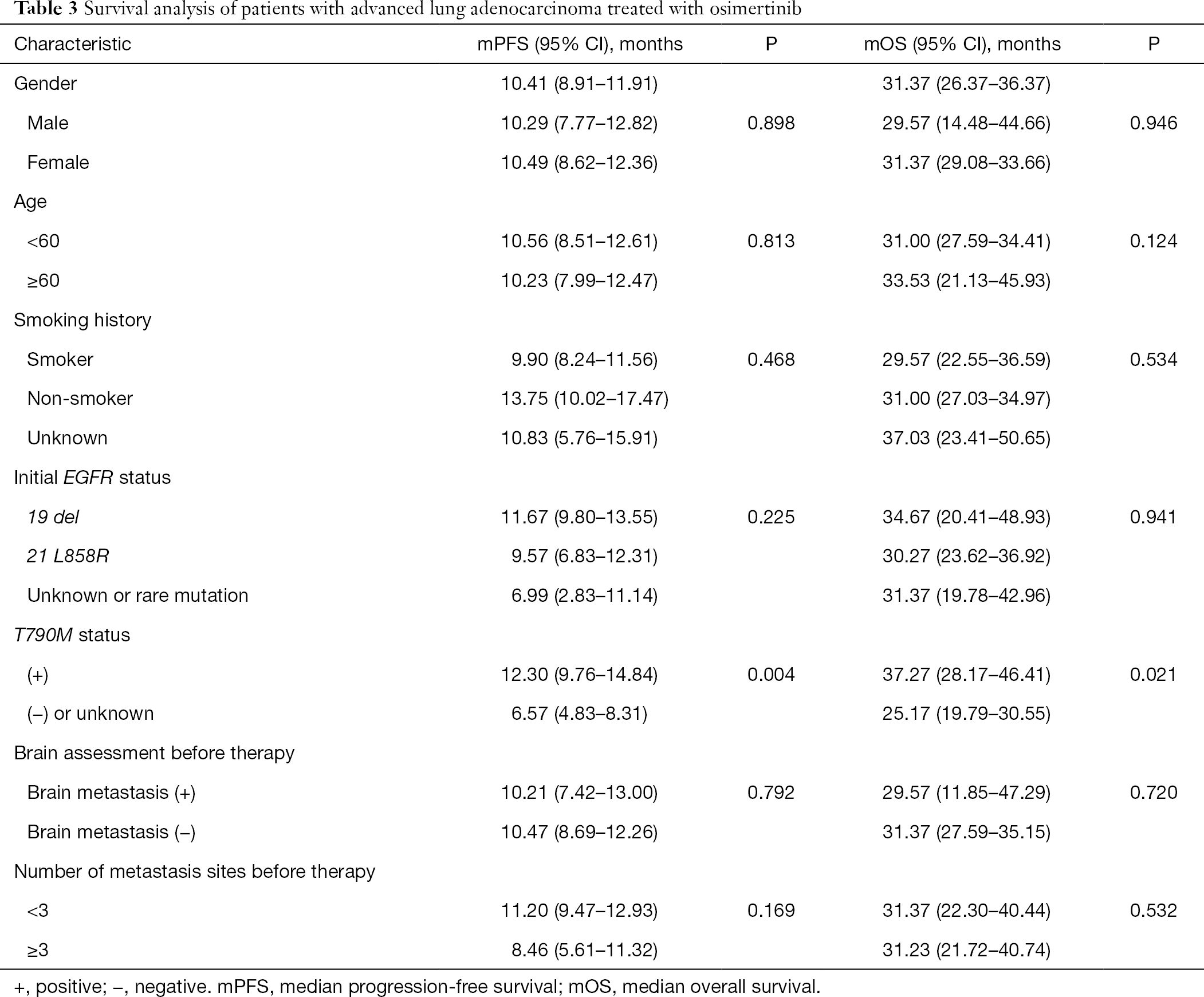 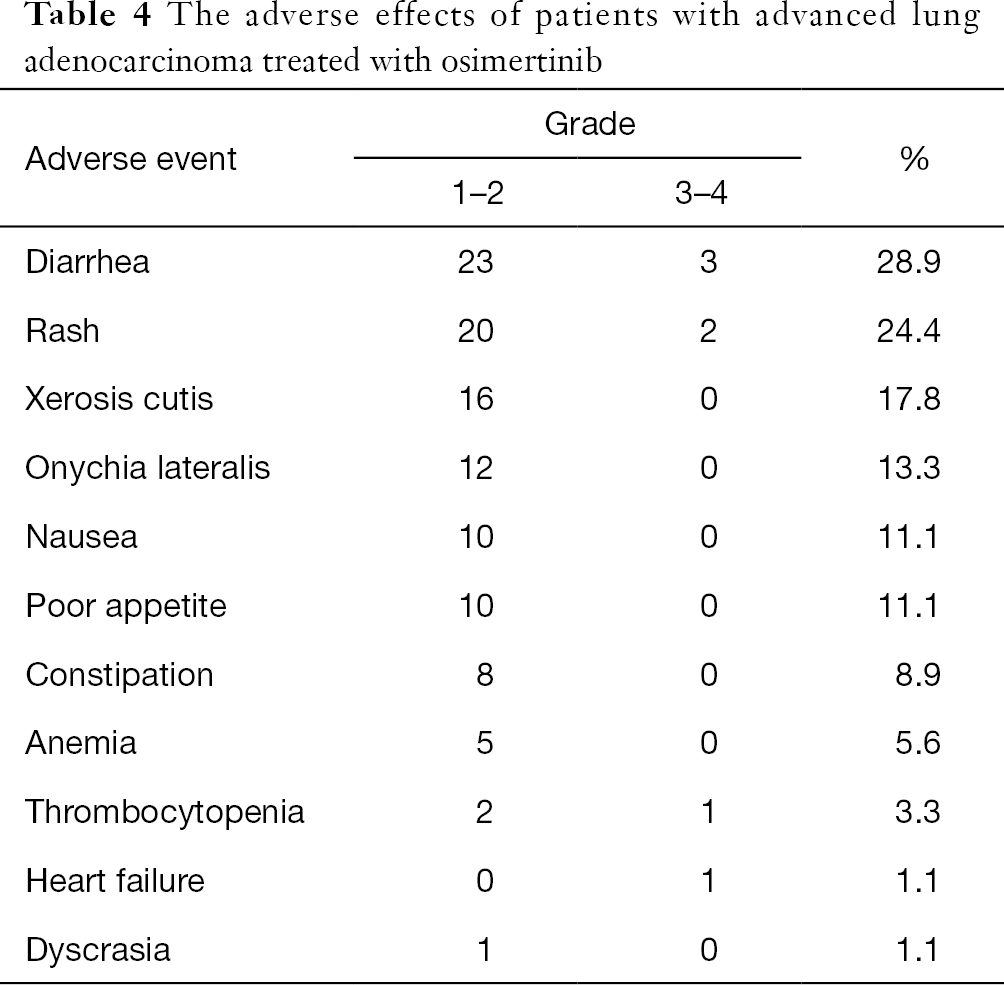 Acquisition of the EGFR T790M mutation is the most common resistance mechanism, accounting for 50–60% of progression after ﬁrst-line EGFRTKIs. The presence of the T790M variant reduces the ability of the reversible EGFR-TKIs, geﬁtinib and erlotinib, to bind to the adenosine triphosphate (ATP)-binding pocket of EGFR, which reduces the EGFR-TKI-mediated inhibition of downstream signaling.

Osimertinib is a novel oral, potent, and selective third-generation irreversible inhibitor of both EGFRm(+) sensitizing and T790M resistance mutants that spares wild-type EGFR. This mono-anilino-pyrimidine compound is structurally distinct from other third-generation EGFR TKIs and offers a pharmacologically differentiated profile from earlier generation EGFR TKIs. Preclinically, the drug potently inhibits signaling pathways and cellular growth in both EGFRm(+) and EGFRm(+)/T790M(+) mutant cell lines in vitro, with lower activity against wild-type EGFR lines, translating into profound and sustained tumor regression in EGFR-mutant tumor xenograft and transgenic models (3).

As third-generation EGFR-TKIs selectively act on the EGFR-TKI-sensitive mutations and secondary T790-resistant mutation, osimertinib has shown excellent safety and effectiveness in early clinical trials (AURA1 and AURA2) (4,5). Compared with the platinum-containing regimen, the efficacy of osimertinib in the first generation of EGFR-TKI-resistant NSCLC patients was determined by prospective and multicenter clinical trials of AURA3 (2). In this study, the efficacy analysis of osimertinib yielded an ORR of 63.3%, a DCR of 93.3%, an mPFS of 10.41 months, and an mOS of 31.37 months. Compared with the previous studies (2,6), ORR, DCR, PFS, and OS were comparable. In terms of safety, osimertinib performed well, adverse events were slightly controllable, and the survival period was better.

In Wu et al.’s study (8), according to the data of the randomized phase III AURA3 trial, the ORR was 40% (30/75; 95% CI, 29–52%) and 17% (7/41; 95% CI, 7–32%) in patients with measurable and/or non-measurable central nervous system (CNS) lesions, respectively (P=0.014). In patients with measurable and non-measurable CNS lesions, the median CNS remission duration was 8.9 months (95% CI, 4.3 months to not calculable) and 5.7 months (95% CI, 4.4–5.7 months) in the osimertinib group respectively, and 5.6 months (P=0.004) in the pemetrexed group. Although the number of cases in our study was relatively small, it was still strongly suggested that in the T790M-positive advanced NSCLC patients, the efficacy of osimertinib in the treatment of central nervous system metastasis is relatively accurate.

The most common adverse events in this study were diarrhea (28.9%), rash (24.4%), dry skin (17.8%), and paronychia (13.3%), which is similar to the AURA3 study. However, in our study, two patients stopped taking osimertinib because of grade 3 thrombocytopenia and heart failure. The specific reason and mechanism for this occurrence needs to be further studied.

Lee et al. (9) found that amplification of the MET gene, amplification of HER2, overexpression of HGF, transformation of NSCLC into SCLC and epithelial mesenchymal transformation (EMT) were also important factors of EGFR-TKI acquired resistance. Some secondary mutations of EGFR were also related to the acquired resistance to EGFR-TKI (including the third-generation drug, osimertinib). Our study also suggests that after the first generation of EGFR-TKI resistance, tissue or liquid sample testing (NGS) should be done, on the basis of which heterogeneity should be found and which overall treatment strategy should be implemented.

In summary, for advanced lung adenocarcinoma patients (including those with brain metastasis) with EGFR-T790M mutation-positive after first-line EGFR-TKI treatment, osimertinib can achieve a positive effect and have a low incidence of adverse reactions.

Reporting Checklist: The authors have completed the STROBE reporting checklist. Available at http://dx.doi.org/10.21037/tlcr-20-685

Conflicts of Interest: All authors have completed the ICMJE uniform disclosure form (available at http://dx.doi.org/10.21037/tlcr-20-685). The authors have no conflicts of interest to declare.

Ethical Statement: The authors are accountable for all aspects of the work in ensuring that questions related to the accuracy or integrity of any part of the work are appropriately investigated and resolved. The study was conducted in accordance with the Declaration of Helsinki (as revised in 2013). Because of the retrospective nature of the research, the requirement for ethical approval and informed consent was waived.