Dynamic titanium prosthesis based on 3D-printed replica for chest wall resection and reconstruction
Video 1 The initial VTM model based on pre-chemo CT and PET-CT images is showed in its digital design, preliminary to PLA anatomic replica creation and subsequent prosthesis graphic design. The PLA 1:1 anatomic replica allows the surgeons to precisely assess the surgical margins creating a perfectly fitting titanium prosthesis. Surgery is started with a video-thoracoscopic exploration of the left pleural space excluding any parenchymal infiltration. Then, with the patient in lateral position, the multi-equip with plastic surgeons proceeds to the latissimus dorsi flap preparation. Once the flap is prepared, it is left on site, wrapped in hot wet gauze and the patient is turned into the supine position. A non-conventional incision is carried out. Left pectoralis major is disconnected from its medial and inferior insertion. Surgical margins are delineated on the costo-sternal plane as decided on the plastic replica. The antero-medial arches of the III, IV, V, VI and a part of the VII rib are removed en-bloc with the tumor. The prosthesis is prepared and seems to be perfectly fitted for the defect. The prosthesis is anchored in place by steel wires and slim Mersilene bands. Thus, the latissimus dorsi flap is released and brought down to cover the prosthesis without turning the patient. The left pectoralis major is then re-positioned as a sliding flap and incisions are closed showing the satisfying symmetrical effect of the an-terior chest.

Evolving technologies in chest wall reconstruction allow the repair of chest stability and the protection of underlying organs even in need of extended resections. Different materials are currently available with comparable results, but no one is ideal yet (1). Despite a meticulous pre-operative planning, some difficulties could be encountered. The “step-by-step” strategy could be defective and, industrial serial prostheses could be inadequate for the defect. Titanium bars undoubtedly represent the most popular materials for several characteristics (2). Nevertheless, its rigidity entails some issues: the complete loss of elasticity of the reconstructed area, potentially representing a limitation for the respiratory function (3) and the impairment of the screwed costal spot. This spot represents an elective area for bone fractures and bars displacement even after mild trauma (4,5). 3D-printing technology and the use of porous titanium can be significant resources to obtain a highly personalized dynamic prosthesis (3,6). Likewise, pre-operative 3D-printing of a plastic anatomical replica can improve the visual analysis, pre-operative planning, simulation and prosthesis design (7,8). Different materials have been utilized for personalized chest wall reconstruction with different results (1,9-16). However, doubts remain about the remaining compliance during breathing (9). In this regard, the combination of a preliminary 3D-printed anatomic replica followed by a dynamic titanium prosthesis seems to be effective to manage extended chest wall resections.

A Virtual Three-dimensional Model (VTM) is created out of CT images of the patient using dedicated software (Mimics Innovation Suite 21.0; Materialise, Belgium). The radiological records, in “Digital Imaging and Communications in Medicine” (DICOM) format, are imported into the software. Segmentation converts the 2D images of the CT into a single 3D image. At first, a VTM of the entire thorax is created and then exported in five Standard Triangulation Language (STL) files, one for each specific district: airways, lung parenchyma, mediastinum, neoplastic lesion and bones. The VTM immediately provides additional information to surgeons, allowing a more intuitive visualization of the relationship between structures, although the limits of a digital resource are well-known. Consequently, an anatomical 1:1 polylactic acid (PLA) replica is printed using an Alina FF250M, based on a Fusion Deposition System technology. The anatomic replica helps the surgical team to identify bone resection margins allowing to preoperatively determine the best prosthetic design. Then, the resection edges, identified on the 3D model, are reported on the VTM, obtaining the expected resection. So, the dynamic prosthesis can be printed (Instituto Tecnológico de Canarias, ITC, Osteobionix®, Spain). The prosthesis is designed using a Computer Aided Design (CAD) parametric Software (CREO®-PTC) and the files are exported in STL format to a 3D metal printer. The manufacturing process is Electron Beam Melting (EBM-S12) developed by Arcam AB (Krokslätts Fabriker, Mölndal-Sweden). This printer builds the implants layer-by-layer (70 µm) using standard Ti6Al4V-ELI powder with an average particle diameter of 50 µm. The process takes place in vacuum (1×10−5 mbar during the entire building cycle) and at high temperature (800 °C). The resulting product do not need any thermal treatment, is free from residual stresses and has a microstructure free from martensitic composition. The prosthesis is then cleaned from melted metal volume by sandblasting technique, obtained by the same Ti6Al4V-ELI powder (50–60 µm). Supports removal and surface polishing are handmade. Finally, the implant is immersed in an ultrasound bath (80 °C) with pure distilled water and soap for 40 min and afterwards in an ultrasound bath (80 °C) of pure distilled water for 15 min. The final implant is not antibiotic coated. Porous titanium prosthesis is composed by hard edges and flexible central structure which mimic the ribs arches, so it can adapt to respiratory dynamics and movements (3,6). The rigid edges of the prosthesis are equipped with holes, so the prosthesis can be easily fixed to the bone stumps. Its intrinsic flexibility can facilitate the prosthesis placement despite minimal dimensional odds, reducing the operative time. Moreover, the porous flexible arches of the prosthesis are thought to be re-filled by autologous tissue with a high biocompatibility over time and allowing a good reaction to mechanical stress, preventing fractures, decubitus and dislocations. This tailored dynamic prosthesis aims at determining less tension on the bone stumps during breathing, movements and in case of trauma.

In our 25-year experience, titanium bars became the most utilized material for chest wall reconstruction. Because of two post-traumatic bar dislocations occurred in our sample, we developed interest in new technologies to repair extended chest wall defects, searching for the ideal device.

A healthy 25-year-old woman, affected by Ewing’s sarcoma of the left chest wall was referred to our department (Figure 1A,B). CT-guided trans-thoracic core biopsy allowed the diagnosis. The patient was submitted to induction chemotherapy. Control PET-CT showed a decrease of tumor diameter and SUVmax (Figure 1C,D). Resectability was assessed in a multidisciplinary setting. Since the perimeter of resection needed to include pre-chemotherapy tumoral margins, a 3D-printed personalized prosthesis was considered. 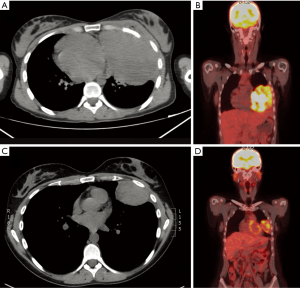 At first, a VTM of the pre-chemotherapy CT scan of the left hemi-thorax was performed. Then, a PLA 1:1 replica of the affected hemi-thorax was printed (Figure 2A,B). Therefore, resection margins were carefully delineated on the replica. Biomedical engineers could then design a personalized prosthesis expecting the resection of the anterior and lateral arch of the left III, IV, V and VI ribs and a partial segment of VII rib (Figure 2C,D). The designed VTM allowed the creation of a tailored porous titanium prosthesis. A tandem equipe with plastic surgeons was organized to prepare a left latissimus dorsi flap to protect the prosthesis. The resection was performed strictly following the PLA replica in each identified landmark. The anatomic replica was essential, considering there was no clearly visible sign of pre-chemotherapy tumor’s perimeter on the removed chest. Surgeons did not come across issues in fixing the prosthesis with wires and Mersilene bands nor in covering the defect. The surgical specimen was perfectly fitting the expected resection planned on the PLA model, so that the prosthesis completely overlapped the defect (Video 1). The preoperative planning and the implant’s design have determined no need to modify the prosthesis in any of the surgical phase of the reconstruction. This strategy allowed an optimal cosmetic outcome with an excellent symmetrical effect of the two hemi-thoraxes with a satisfactory functional outcome. This dynamic prosthesis perfectly shadows the respiratory movements of the chest. The 30-days and 12-months clinical and radiological checks confirmed the results (Figure 3A,B). The prosthesis was perfectly tolerated and the patient has referred no discomfort (static or dynamic). Physical examination did not show any chest deformity, pathological movement or paradox. 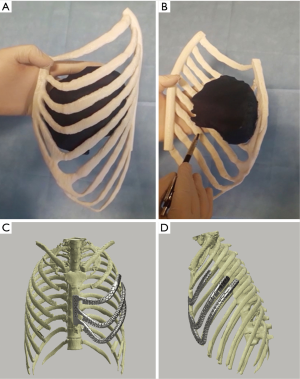 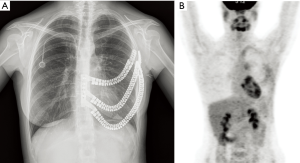 The study was conducted beneath the Helsinki declaration principles (as revised in 2013) and the patient signed an informed consent for anonymous data delivery for scientific purposes.

In the last years, tailored prosthesis has been appreciated for reducing operative time and for allowing a more anatomical reconstruction. In 2013 the first report of a 3D-printed chest wall tailored prosthesis was published (17). This was a single rigid plate replacing sternum and ribs, focused mainly on a static reconstruction without considering the physiological flexibility of the chest cage. A new implant, less rigid but still designed with a static concept, was reported in 2015 (18). Most prostheses, serial or custom-made, provide hardness and stability to protect inner organs; however, they restrict normal respiratory movements along with possible prosthetic loosening at short or middle-term. Starting from 2016 a new kind of custom-made dynamic implants have been developed at ITC (1,3,6). The spring-like geometry of these dynamic implants allows a more physiological implant on the bone. According to postoperative dynamic radiological studies, this design has proven to mimic the behavior of native chest wall elements during ventilation and preserves the respiratory function. The geometries of these prostheses provide the necessary ﬂexibility and simplify the surgical placement. Their ﬂexibility can also absorb potential impact, preventing breakages, in a more physiological way. Furthermore, this design allows a slight elongation of the prosthesis at the rib level, following respiratory movements; this represents an important advancement compared to the traditional prosthesis. The flexibility is guaranteed, but the elongation occurring in physiologic chest movements is not fully achieved. The prosthesis herein described is the first of a new generation showing reduced tension values under load. The main geometrical differences compared to other implants (1,3,6,19) is represented by a variable witness of cross section perpendicular to the costal line reducing tension and avoiding breakings (Figure 4). The real achievement of this new generation of prosthesis lies on the functionality of the metal implant that is tailored on the defect using 3D-printing technology to both create the prosthesis and the plastic anatomic replica. To create a flexible implant with resistant fixing plates aims at integrating in the human body a highly adapted prosthesis in order to guarantee a solid static resistance and possible passive movements at the same time.

3D-printing technology could be an excellent alternative in the surgical armamentarium for bulky chest wall resection, especially in the operative planning, to minimize unforeseen issues during surgery. The plastic 3D-model is strategic to directly visualize the anatomy of the chest and supports the operative planning while the most advanced 3D-printed prosthesis allows to reduce difficulties on the reconstructive phase. The new generation prostheses achieve a good tissue/prosthesis integration and decrease both functional sequelae and possible native bone fractures after blunt trauma. In conclusion, some limitations are still present. 3D-printing technology is time consuming so cannot be used in time-sensitive cases. This technology is expensive and unaffordable in some circumstances. For this reason, a wider application of medical applied 3D-printing requires specific facilities and resources. A possible solution could be to have a centralized bioengineering center within the third level hospitals.

Funding: The authors declare independent funding and freedom of investigation.

Ethical Statement: The authors are accountable for all aspects of the work in ensuring that questions related to the accuracy or integrity of any part of the work are appropriately investigated and resolved. The study was conducted beneath the Helsinki declaration principles (as revised in 2013) and the patient signed an informed consent for anonymous data delivery for scientific purposes.

Conflicts of Interest: All authors have completed the ICMJE uniform disclosure form (available at http://dx.doi.org/10.21037/tlcr-20-699). The authors have no conflicts of interest to declare.