Lung cancer is the leading cause of cancer mortality world-wide (1). Approximately 85% of all lung cancer is non-small cell lung cancer (NSCLC). Although great progress has been made in treatment recently, the prognosis of lung cancer is still poor. Cancer biomarkers can facilitate the early diagnosis and monitoring of the disease by contributing to our understanding of tumor biology and allowing more efficient therapeutic regimes to be applied earlier in the disease course, thus further improving patient survival (2). Several molecular markers have been reported to predict prognosis and survival of patients with NSCLC (3,4). The development of metastasis is the major obstacle to long-term survival. To identify the molecular markers related to metastasis may better predict the prognosis in patients.

The epithelial-mesenchymal transition (EMT), is a cellular process that epithelial cells lose their adhesion properties and acquire mesenchymal properties of migration and invasion (5,6). It allows polarized, immotile epithelial cells to convert to motile mesenchymal cells, with the acquisition of fibroblastoid morphology, enhanced potential for metastasis, resistance to apoptosis, and stem cell properties (5,7-9). The EMT is activated in a wide variety of cancer cells and enhanced potential for metastasis (6). Therefore, EMT is considered to play crucial role in inducing tumor invasion and metastasis (10,11). Repression of E-cadherin is a hallmark of the EMT process. Suppressed expression of E-cadherin leads to the loss of cell-cell adhesion and cancer progression (12). Based on the connection between EMT and cancer metastasis, the EMT regulatory molecules might be prognostic markers for NSCLC.

Transcription factors such as Twist, Snail, Zeb, and FoxC families are expressed in different cancers, and their overexpression induces EMT in a variety of cancer types (6,13). Among these, Twist is a basic helix-loop-helix transcription factor, which can promote EMT by down-regulating E-cadherin directly or interacting with other transcription factors (10,14,15). Twist has been reported to correlate with poor survival in a variety of carcinomas, such as breast, prostate, and hepatocellular carcinoma. Overexpression of Twist was detected in these tumors, and inhibition of Twist expression could significantly improve the survival (14-16). However, the prognostic value of Twist in lung cancer remains controversial. Miura et al. (17) suggested that Twist expression was not associated with EMT and might not predict the survival of NSCLC. However, Hung et al. (18) suggested an inverse correlation between Twist expression and patient prognosis. We therefore carried out a meta-analysis of data from published studies to quantitatively analyze the prognostic value of Twist in patients with lung cancer.

The Oncomine cancer microarray database was used to analyze the mRNA expression profiles of NSCLC tissues relative to their normal controls. The data mining strategy is based on a published methodology established by Oncomine (19). First, significantly upregulated genes in cancer samples compared with the normal tissue counterpart (greater than twofold, P<0.05) were selected. Then, concept filters in the Oncomine database were used to identify the known tyrosine kinases which differentially expressed in NSCLC.

A literature search of EMBASE, Medline, ISI Web of knowledge, and PubMed up to 5 January, 2015 was conducted. Search terms included “Twist”, “lung cancer”, “lung carcinoma”, “prognosis”, “survival”, “prognostic”, “outcome” and “significance”. The references reported in the identified studies were also used to complete the search. To avoid replicated data in different publications from the same author or the same researching team, we further checked these remaining articles.

The eligibility criteria in this meta-analysis as following: (I) trials had to conducted on human lung cancer; (II) the correlations between the expression of Twist and prognosis was reported; (III) Twist expression level was measured by immunohistochemistry (IHC); (IV) the hazard ratios (HRs) could be extracted directly or calculated indirectly; (V) published in English or Chinese.

To quantify the prognostic value of high Twist level, the survival analysis was conducted by comparing the high value to low value. The HRs and 95% confidence intervals (CIs) were directly extracted from the original studies or calculated from available survival by the Tierney’s methods if the data were not reported (20). Heterogeneity test with I2 statistic and Q statistic was performed (21). If HRs were found to have fine homogeneity, a fixed effect model was used for secondary analysis; if not, a random-effect model was used. HR >1 implies poor prognosis for high Twist level, and P<0.05 was considered to be statistically significant. We conducted subgroup analysis by ethnicity and histology, respectively. Sensitivity analyses were conducted to evaluate the stability of our results. Begg’s test and Egger’s test, and a Begg’s funnel plot were used to assess the publication bias. A value of “Pr > |z|” less than 0.05 or a value of “P> |t|” less than 0.05 was considered to be potential publication bias.

To determine whether Twist expression was associated with lung cancer in humans, we first examined Twist mRNA expression in the publicly available database Oncomine. SA; Oncomine was used for analysis and visualization). Compared with normal lung, Twist mRNA expression is significantly increased in lung cancer, especially in squamous cell cancer (Figure 1). We further explore the prognostic value of Twist by meta-analysis. 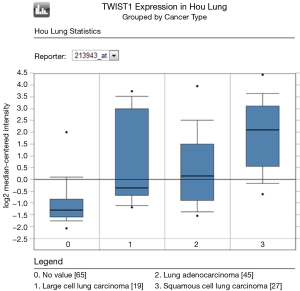 Figure 1 The expression of Twist in lung cancer (Oncomine).

A total of five studies were included finally (18,22-25). These five eligible studies included 472 samples. All the studies measure Twist expression level by IHC. Three studies included stage I-IV lung cancer patients, one study included only the patients with stage I, and the rest one provided no detail data. The criteria to define Twist positive was not entirely uniform. The basic characteristics of the five eligible publications are listed in Table 1. 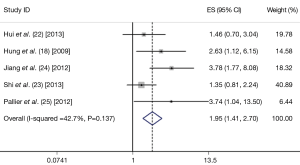 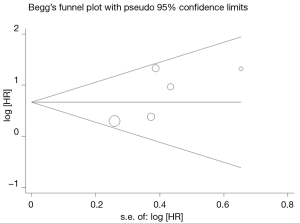 Twist is a highly conserved developmental gene that had been found to induce cancers promoting through EMT. Over the past decade, the reactivation of TWIST embryonic transcription factors has been described as a marker of poor prognosis in a large set of human cancers (2,26-28). However, the consensus about prognostic value of Twist in lung cancer has yet to reach. Our meta-analysis based on the results of Oncomine, which indicated the high expression of Twist in lung cancer. We then conduct meta-analysis analyzed the prognosis value of Twist specifically in lung cancer. And our results suggested that expression of Twist was associated with worse survival.

Based on our results, Twist might be a poor prognostic indicator for lung cancer. The subgroup analysis by population implied that the unfavorable prognosis value of twist could be detected in both Chinese and Caucasian patients. Although the pooled HR in Caucasian seemed to be higher, it could not demonstrate anything because of only one study conducted trial on Caucasian. In addition, few researches identified different prognostic value of Twist between populations. Therefore, more high quality studies are needed to further explore the prognosis value in different population.

It has been proved that biomarkers can be detected in cancerous tissue, blood, and body fluids. However, IHC is considered to be the best choice for examination of cancerous tissue samples. Therefore, we only included the studies that evaluated Twist by IHC. By the selection, it was consistency in the evaluation process among studies which may reduce the heterogeneity. Recently, Beck et al. (29) uncover a key role for Twist in the early steps of tumor initiation and a dose-dependent role in malignant progression. It suggested that different level of Twist could regulated the different carcinoma process, including tumor initiation, progression, propagation, and EMT by different mechanisms. The uniform evaluation method and appropriate cut-off value are important to identify the prognostic value of Twist accurately.

There are some limitations in this meta-analysis. Firstly, the sample size (SS) of our study was relatively small which is unfavorable to get powerful results. Secondly, we limited our analysis to studies which used IHC as detection method. However, the individual used different primary antibody and the antibody dilution, the method and evaluation of staining, which might affect the IHC sensibility. As previously mentioned, the uniform definition of high Twist expression is more helpful to obtain accurate results. Besides, the cut-off criteria and thresholds of cut-off value were subjective and not uniform in each article. Lastly, the expression of Twist in squamous cell cancer is likely to be highest according to Oncomine. However, we the primary article could not provide sufficient information for further analysis by histological subtypes.

Based on our results, the Twist could be a poor prognostic indicator and is potential to be target for treating lung cancer. To substantiate our current results and further explore, adequate prospective studies are needed.

Funding: The study was supported by the National Natural Science Foundation of China (NO. 81302032).