RRx-001 is a small molecule Myc inhibitor (1-3). RRx-001 down-regulates CD47, also known as a “don’t eat me” signal and repolarizes tumor-associated macrophages (TAM) from M2 to M1 (4,5). RRx-001 was given with cisplatin or carboplatin plus etoposide to twenty-six patients in a non-randomized phase 2 clinical trial called QUADRUPLE THREAT (QT; NCT02489903) including previously treated small cell lung cancer (SCLC) patients. SCLC is the fastest-growing lung tumor subtype with a doubling time in the range of 25 to 217 days (6) and a propensity for early dissemination and relapse, despite initial response rates of around 80%. SCLC has been designated as a recalcitrant tumor type by the National Institutes of Health due to its exceptional aggressivity, recidivism and lethality (7). The prognosis remains dismal even with the recent FDA approval of three checkpoint inhibitors since overall response rate (ORR), progression-free survival (PFS) and overall survival (OS) are not markedly altered (8). Hence, additional therapies to interrupt the inevitability of the sharp downward trajectory of SCLC and improve the clinical course are urgently needed.

Immune evasion is a hallmark of cancer (9), which is the raison d’etre for immune checkpoint inhibitors especially in potentially susceptible tumor types such as SCLC. In SCLC, a profoundly immunosuppressive environment is present (9,10), which accounts in part for the overall poorness of responses to standard therapies. Among the most important contributors to immune evasion are immune checkpoints, such as programmed death-ligand-1 (PD-L1), which binds to programmed death-1 (PD-1) on T cells, B cells, dendritic cells, and natural killer T cells and induces systemic and local tolerance (11). PD-L1 expression has been demonstrated in SCLC and associated with poor outcomes (12). Importantly, RRx-001 is a Myc inhibitor and Myc has been shown to regulate the mRNA expression of PD-L1 (Figure 1) (13). Therefore, we investigated the association between clinical outcome and the change of PD-L1 expression on CTCs from baseline in SCLC patients treated with RRx-001. 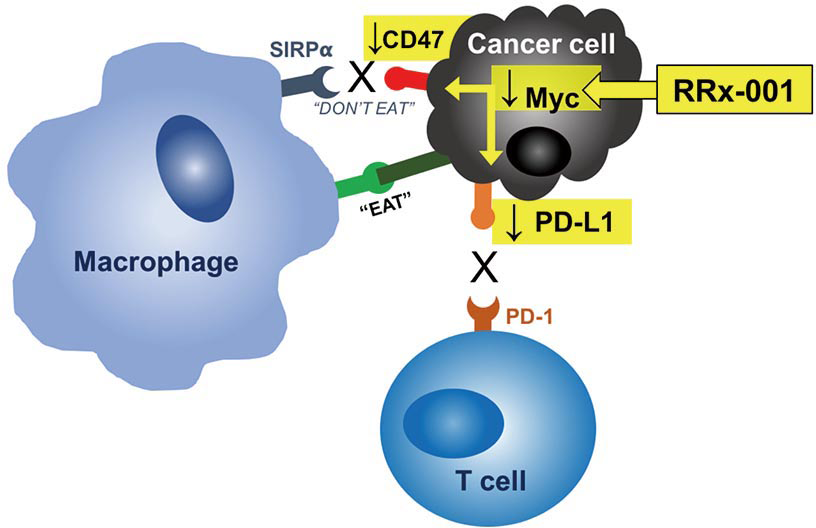 The enumeration and characterization of circulating tumor cells (CTCs), cells that are shed from the primary or metastatic tumor, provided a minimally invasive and, therefore, repeatable, method despite being present in extremely low numbers (approximately 1 CTC to, rarely, greater than 40 CTCs per 1 mL in SCLC patients) (3,14), enabling the sampling of tumor cells from peripheral blood and monitoring PD-L1 expression on tumor cells over time on the clinical study. In this study we evaluated the PD-L1 status of CTCs pre and post RRx-001 treatment in a phase 2 clinical trial, called QUADRUPLE THREAT, where patients with previously treated extensive-disease SCLC received RRx-001 in combination with a platinum doublet. We present the following article in accordance with the REMARK reporting checklist (available at http://dx.doi.org/10.21037/tlcr-20-359).

In an open label, non-randomized phase 2 study called QUADRUPLE THREAT (QT) (NCT02489903), the data were available for 14 patients with SCLC in third-line or beyond who had previously progressed on a platinum doublet i.e., cisplatin/carboplatin plus etoposide. The patients received weekly 4 mg RRx-001 followed by a reintroduced platinum doublet. Tumor response was evaluated according to the Response Evaluation Criteria in Solid Tumors (RECISTv1.1) measured every 6 weeks. PFS and OS were followed for up to 2 years. Collected data are Health Information Portability and Accessibility Act (HIPAA) protected and anonymized for inclusion. Among twenty-six patients consented for this study under Institutional Review Board (IRB)-approved protocols, 14 patients are included in this analysis, as the remaining enrolled patients had different (non-SCLC) tumor types. The study was approved by the respective institutional review board at each institution that participated in the clinical trial (registration number NCT02489903) and individual consent for this retrospective analysis was waived. All procedures performed in this study were in accordance with the Declaration of Helsinki (as revised in 2013).

Fourteen patients with SCLC were analyzed to investigate the association between clinical response and PD-L1 expression on CTCs pre (Cycle 1 Day 1 or C1D1) and post (Cycle 3 Day 1 or C3D1) RRx-001 treatment as described previously (15). Epithelial cell adhesion molecule (EpCAM)-positive CTCs from 10 mL of blood on two consecutive time points cycle 1 day 1 and cycle 3 day 1 (one cycle duration =1 week) were detected by EpCAM-based immunomagnetic capture and flow cytometric analysis where CTCs were defined as viable, EpCAM-positive cells, negative for the pan-hematopoietic marker CD45 and possessing an intact nucleus (15). CTCs were further characterized for protein expression of PD-L1. Blood was drawn into 10-mL CellSave or lavender top (EDTA) tubes and immediately labeled with a study-specific code identifier.

CTCs provide a snapshot of the characteristics of primary and/or metastatic tumor cells (18). We analyzed a clinical data set comprised of 14 RECIST-evaluable patients with complete biomarker data. Seven out of 14 SCLC patients (50%) were females and the median age (years) at baseline was 65 (range, 49–84). The association between clinical response and the change of PD-L1 expression on CTCs from baseline was investigated by using a logistic regression. The logistic model McFadden goodness of fit score (0 to 100) was 0.477, which is a strong correlation value. The logistic model analyzing the association between decreased PD-L1 expression on CTCs after RRx-001 and response to platinum-based doublet therapy had an approximate 92.8% accuracy in its prediction of clinical benefit (SD/PR/CR). The estimated receiver operating characteristic (ROC) displayed a ROC area under the curve (AUC) of 0.93 (95% confidence interval, 0.78‒0.99), which suggested an excellent measure of performance (Figure 2). These results indicate that the reduction of PD-L1 expression on CTCs after RRx-001 was significantly correlated with response to RRx-001-based cancer therapy. 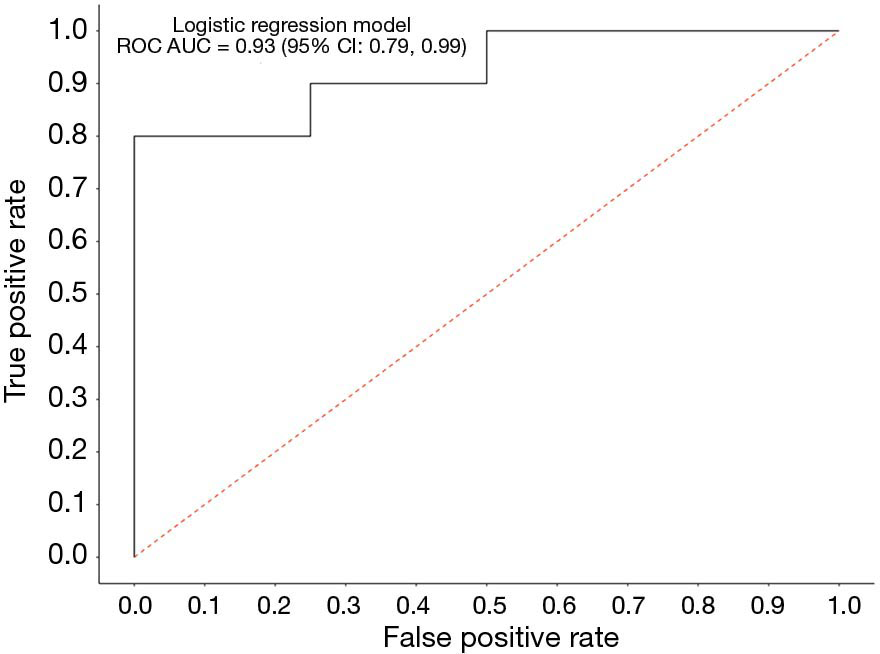 In the QT study, we have shown that the combination of RRx-001 and a reintroduced platinum doublet was associated with clinical benefit and less hematologic and non-hematologic toxicities than expected upon the re-administration of a platinum doublet (19). The oncoprotein Myc is frequently overexpressed in SCLC and the overexpression of Myc has been shown to correlate with PD-L1 expression in lung cancer (20). Myc was previously thought to be undruggable, however, it has been shown that the mechanism of RRx-001 activity is related to inhibition of Myc (21). PD-L1 expression on tumor cells is a validated predictive biomarker for sensitivity to immune checkpoint blockade (22). Therefore, we hypothesized that PD-L1 on CTCs during RRx-001 treatment may serve as a biomarker to predict response to RRx-001-based cancer therapy (Figure 1).

It has been suggested that RRx-001-mediated down-regulations of Myc, CD47 and Myc-stimulated immunosuppressive signaling pathways may serve as underlying mechanisms by which re-sensitization to the reintroduced chemotherapeutic agents occurred (5). In the current study, reduction of PD-L1 expression on CTCs after RRx-001 was significantly correlated with response to reintroduced platinum-based doublet therapy. PD-L1 on tumor cells mediates immune escape (23). Thus, our study suggests that RRx-001 has potential immunomodulatory properties and monitoring of the dynamic changes of PD-L1 expression on CTCs in SCLC patients treated with RRx-001 may serve as a biomarker to evaluate therapeutic efficiency. In the ongoing phase 3 study of a combination therapy with RRx-001 and platinum doublet in previously treated SCLC (REPLATINUM, NCT03699956), biomarker analyses are planned to correlate clinical response with dynamic co-expression of CD47 and PD-L1 on CTCs.

Our findings should be interpreted with caution in view of the limited samples, an exploratory study and univariate analyses which does not take into account variable confounding factors that may affect PD-L1 expression on CTCs. The results need to be confirmed in larger cohorts.

In conclusion, this is the first evidence suggesting a correlation between reduction of PD-L1 expression on CTCs after RRx-001 and response to reintroduced platinum doublet therapy in previously treated SCLC. Our study suggests that PD-L1 on CTCs during RRx-001 treatment may serve as a biomarker to predict response to RRx-001-based therapy in advanced cancer patients.

Reporting Checklist: The authors have completed the REMARK reporting checklist. Available at http://dx.doi.org/10.21037/tlcr-20-359

Conflicts of Interest: All authors have completed the ICMJE uniform disclosure form (available at http://dx.doi.org/10.21037/tlcr-20-359). BO and TRR are employees of EpicentRx. NA is a consultant to EpicentRx. JBT received funding from the NCI Intramural Program and research funding from EpicentRx to her institution. The other authors have no conflicts of interest to declare.

Ethical Statement: The authors are accountable for all aspects of the work in ensuring that questions related to the accuracy or integrity of any part of the work are appropriately investigated and resolved. The study was approved by the respective institutional review board at each institution that participated in the clinical trial (registration number NCT02489903) and individual consent for this retrospective analysis was waived. All procedures performed in this study were in accordance with the Declaration of Helsinki (as revised in 2013).