Prognostic significance of cribriform adenocarcinoma of the lung: validation analysis of 1,057 Japanese patients with resected lung adenocarcinoma and a review of the literature

Lung cancer is the leading cause of cancer-related death worldwide (1,2). Lung adenocarcinoma (L-ADC) is the most common histologic type of lung cancer (3); the latest World Health Organization (WHO) classification for this disease, introduced in 2015 (3), identified five major subtypes according to the most predominant proliferation pattern: lepidic, acinar, papillary, micropapillary, and solid. However, following recent studies, investigators have proposed the cribriform pattern (Cribri-p) as a sixth pattern; cribriform-predominant adenocarcinoma (Cribri-ADC) is reported to be a prognostically unfavorable subtype (4-9). Notably, there were several drawbacks in these studies; the histological definition of Cribri-p was ill-defined, the clinical significance of Cribri-p in other predominant subtypes was not well-examined, and the prognostic significance of Cribri-ADC was described inconsistently (4-9).

To address these shortcomings, we performed this validation study to clearly identify the clinical significance of Cribri-p and Cribri-ADC by reviewing the data of 1057 resected L-ADCs.

We present the following article in accordance with the STROBE reporting checklist (http://dx.doi.org/10.21037/tlcr-20-612).

We retrospectively investigated data of patients with L-ADC who underwent complete curative-intent resection at the Kyoto University Hospital between 2001 and 2015. Patients were excluded from the study if they had multiple primary lung cancers, were treated with chemotherapy or radiotherapy before surgery, underwent incomplete resection, or for whom follow-up information was incomplete based on clinical data retrieved from the Thoracic Surgical Database. The analysis ultimately included 1057 L-ADCs. The requirement for informed consent was waived owing to the retrospective nature of the study and all patients were provided the means to opt out of this study. The study was conducted in accordance with the Declaration of Helsinki (as revised in 2013) and the study protocol was approved by the Kyoto University Hospital ethics committee (R1158-2).

All resected specimens were fixed in formalin, sectioned, and stained with hematoxylin and eosin according to standard procedures. Small-sized tumors were histologically sampled as a whole. Elastic staining was performed to detect pleural or vascular invasion. All of the specimens were reviewed by the authors (NN and AY, both pathologists) who were blinded to the patients’ information. The average number of tumor specimens reviewed for each patient was 3.3 (range, 1–20). According to the 2015 WHO classification, each tumor was subjected to comprehensive histological subtyping, and the percentage of each histological component was recorded in 5% increments (3).

In the current WHO classification, cribriform arrangement was considered as a part of acinar pattern, which is defined as round-to-oval-shaped glands with central luminal space surrounded by tumor cells (Figure 1); however, ‘cribriform arrangement’ is not clearly defined (3). Furthermore, previous studies described two qualitatively different Cribri-p components; one description is invasive back-to-back fused tumor glands with poorly formed glandular spaces lacking intervening stroma (fused-gland pattern) (Figure 1B,F) or invasive nests of tumors cells that produce glandular lumina without solid components (sieve-like pattern) (Figure 1C,G) (4,6,8,9). The other description is nests of tumor cells with sieve-like perforations, which are identical to the ‘sieve-like pattern’ described by the aforementioned researchers (5,7). In some previous studies, the fused-gland pattern was interpreted under a complex glandular pattern (5,7). In our study, we defined Cribri-p as fused-gland pattern or sieve-like pattern and separately recorded their extents in 5% increments. Then, we designated tumors as Cribri-p-positive when their proportions of fused-gland and/or sieve-like pattern were 5% or greater. Cribri-ADC was defined as a tumor which predominantly showed fused-gland and/or sieve-like pattern in the individual tumor (Figure 1). We then evaluated the clinicopathological significance of Cribri-p and Cribri-ADC and studied their prognostic significance. 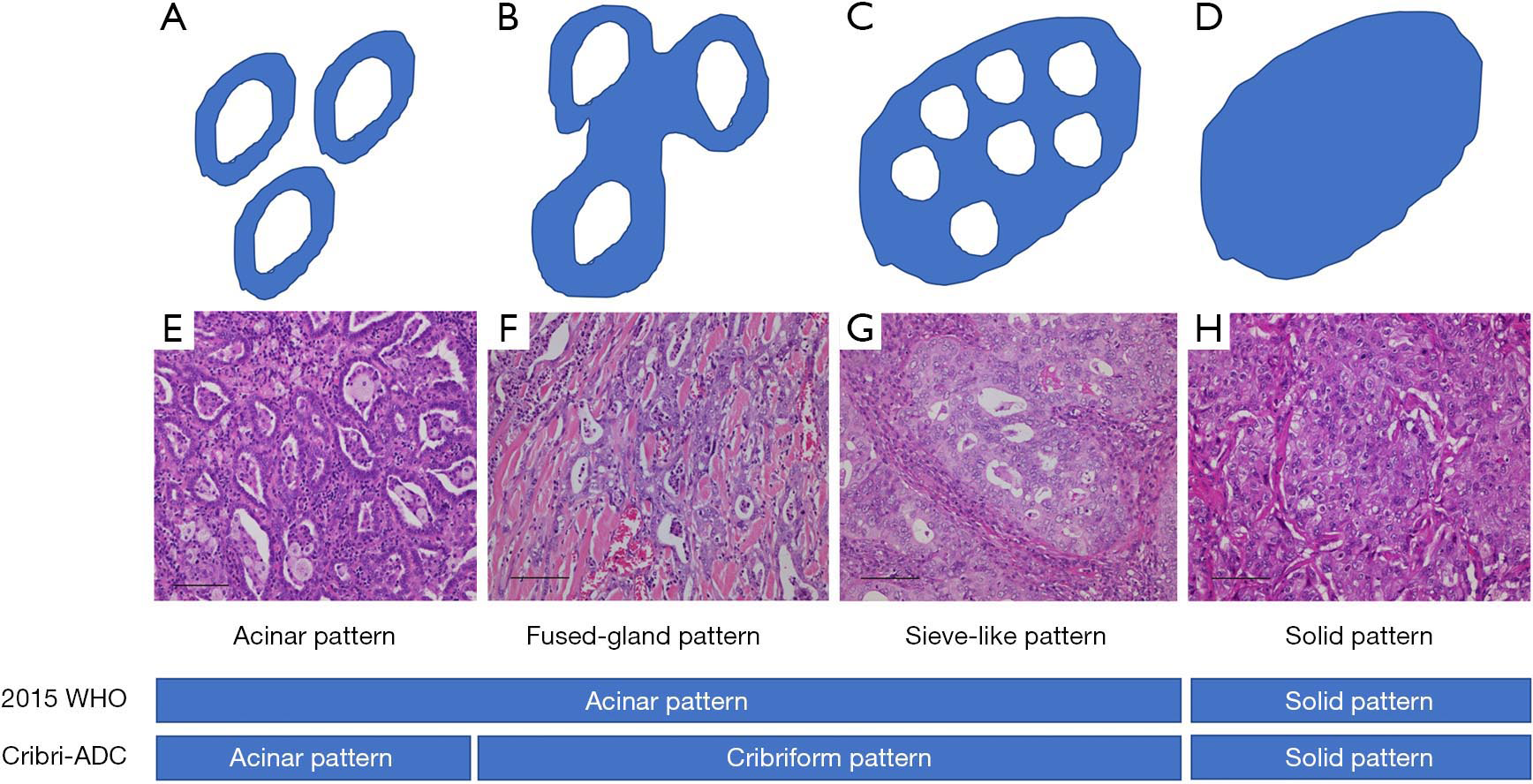 To evaluate the association between Cribri-p-exhibiting tumors and gene alterations, such as EGFR, KRAS, HER2, BRAF, ALK, and ROS1, we used the data that we had performed in our previous studies. Briefly, EGFR mutations were evaluated with the polymerase chain reaction (PCR) single-strand conformation polymorphism method until 2009 (10) and with the peptide nucleic acid–locked nucleic acid polymerase chain reaction clamp method from 2010 onward. The HER2 and BRAF mutations were also examined using PCR-single-strand conformation polymorphism (11,12). The KRAS mutation was investigated using a modified mutagenic PCR restriction fragment length polymorphism technique (10). ALK fusion was detected via reverse transcription PCR and fluorescence in situ hybridization (FISH) until 2009 and via immunohistochemistry and FISH from 2010 onward (13,14). ROS1 fusion was detected via FISH using a ROS1 Dual Color Break Apart Probe (Vysis LSI/Abbott Laboratories, Chicago, IL, USA) according to the manufacturer’s instructions (15). RET fusion was also detected via FISH using the Kreatech RET (10q11) Break FISH probe (Leica Biosystems, Wetzlar, Germany) and RET Split Dual Color FISH probe (GSP Lab., Tokyo, Japan) according to the manufacturer’s instructions (15). 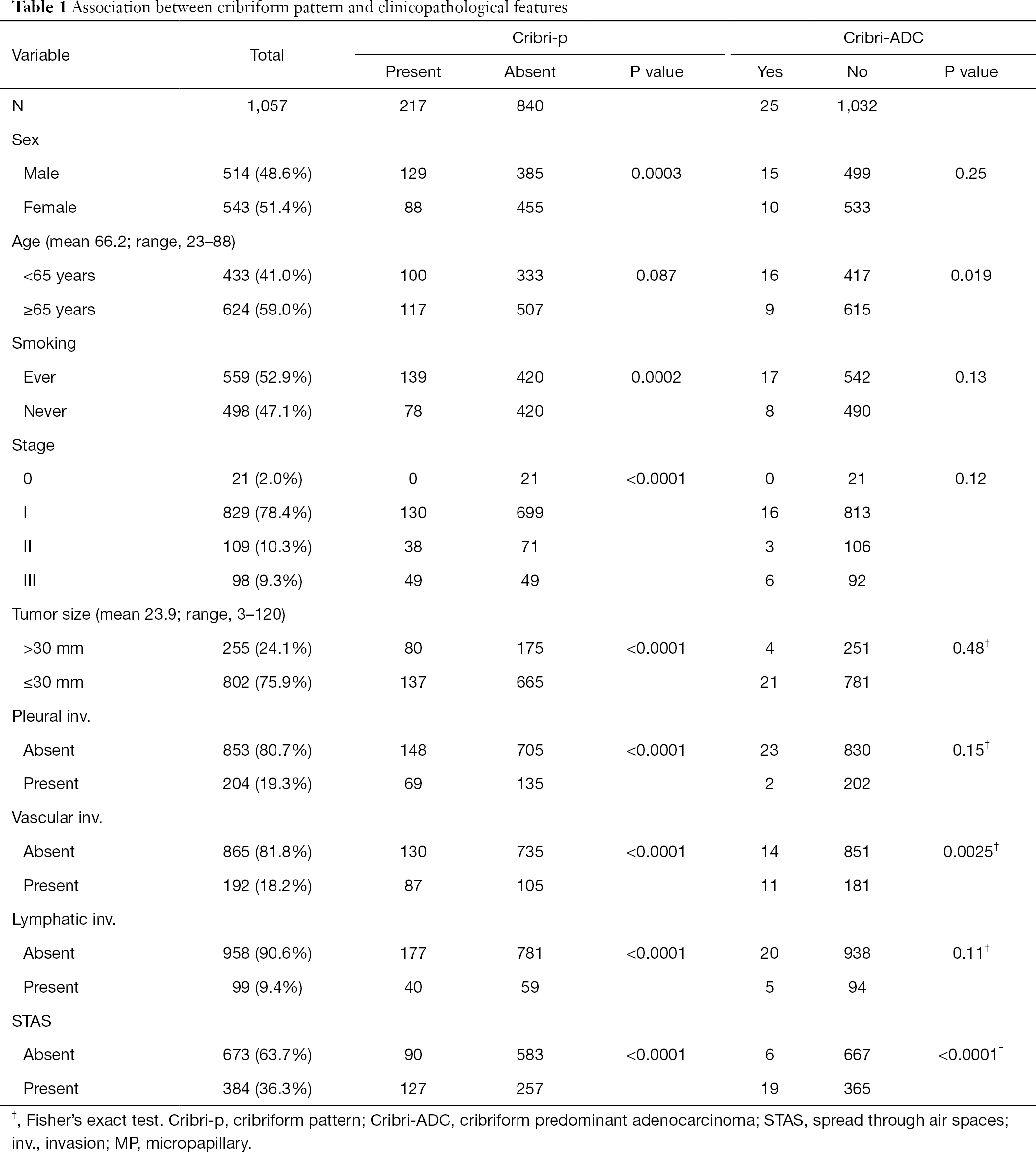 Cribri-p was present in 217 of 1,057 patients (20.5%), and the median proportion of this component was 20.3% (range, 5–90%) (Figure S1A). The median proportion of tumor with the fused-gland and sieve-like patterns were 5.5% (range, 5–30%) and 17.9% (range, 5–90%), respectively (Figure S1B,C). Tumors with only fused-gland patterns and those with both fused-gland and sieve-like patterns were observed in 54 (5.1%) and 163 (15.4%) patients, respectively (Table S1). In the analysis of detailed cribriform pattern, tumor with sieve-like pattern was frequently observed in tumors with solid pattern (P<0.0001). There were 25 patients with Cribri-ADC (2.4%) after adjusting for the number of invasive adenocarcinoma subtypes based on the current WHO classification (Figure S2A,B).

Associations between Cribri-p/Cribri-ADC and gene alteration 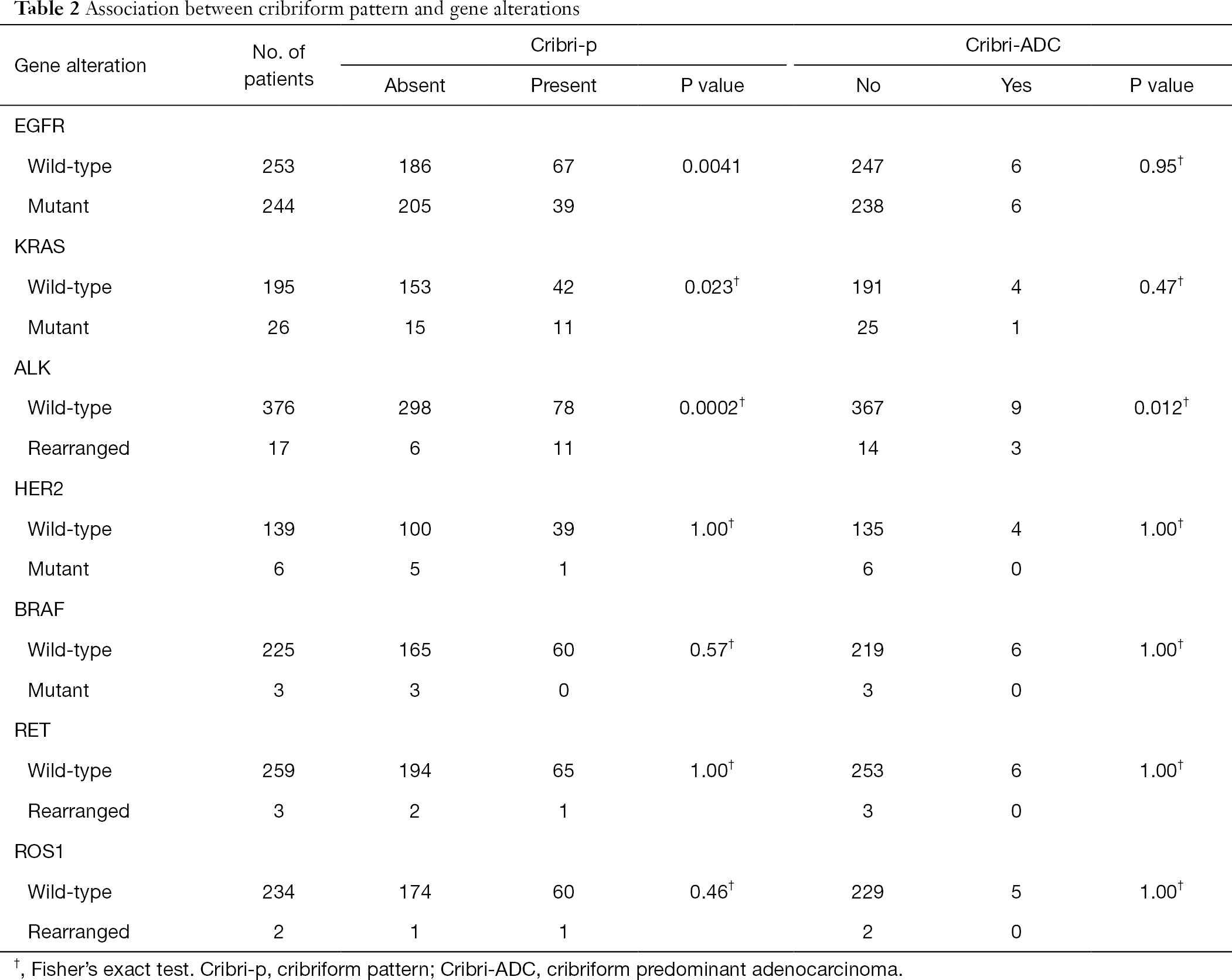 Association between Cribri-p/Cribri-ADC and prognosis

Cribri-p was associated with significantly higher risks of death and recurrence in patients with all stages (relative risk 2.5; 95% confidence interval 1.9–3.2, P<0.0001) and in those with stage I (relative risk 2.1; 95% confidence interval 1.3–3.3, P=0.0044), but not in those with stages II or III (Table S2). Next, we investigated the prognostic significance of Cribri-p in the acinar-, papillary-, solid-, and micropapillary-ADC. Regarding papillary adenocarcinoma, patients with Cribri-p had significantly worse prognoses than did those without (death: P=0.0096, recurrence: P=0.0016) (Table S2). As for micropapillary adenocarcinoma, patients with Cribri-p had significantly higher risks of recurrence than did those without (P=0.024) (Table S2). There were no statistically significant differences in terms of the risk of death and recurrence between patients with acinar and solid adenocarcinoma who had Cribri-p and those who did not. We used factors that were found to be significant in the univariate analysis (data not shown) for the multivariate analysis; Cribri-p was found to not be an independent prognostic factor, whereas a micropapillary pattern was an independent predictor of recurrence while a solid pattern was an independent predictor of both recurrence and death (Table S3, Trial 1). 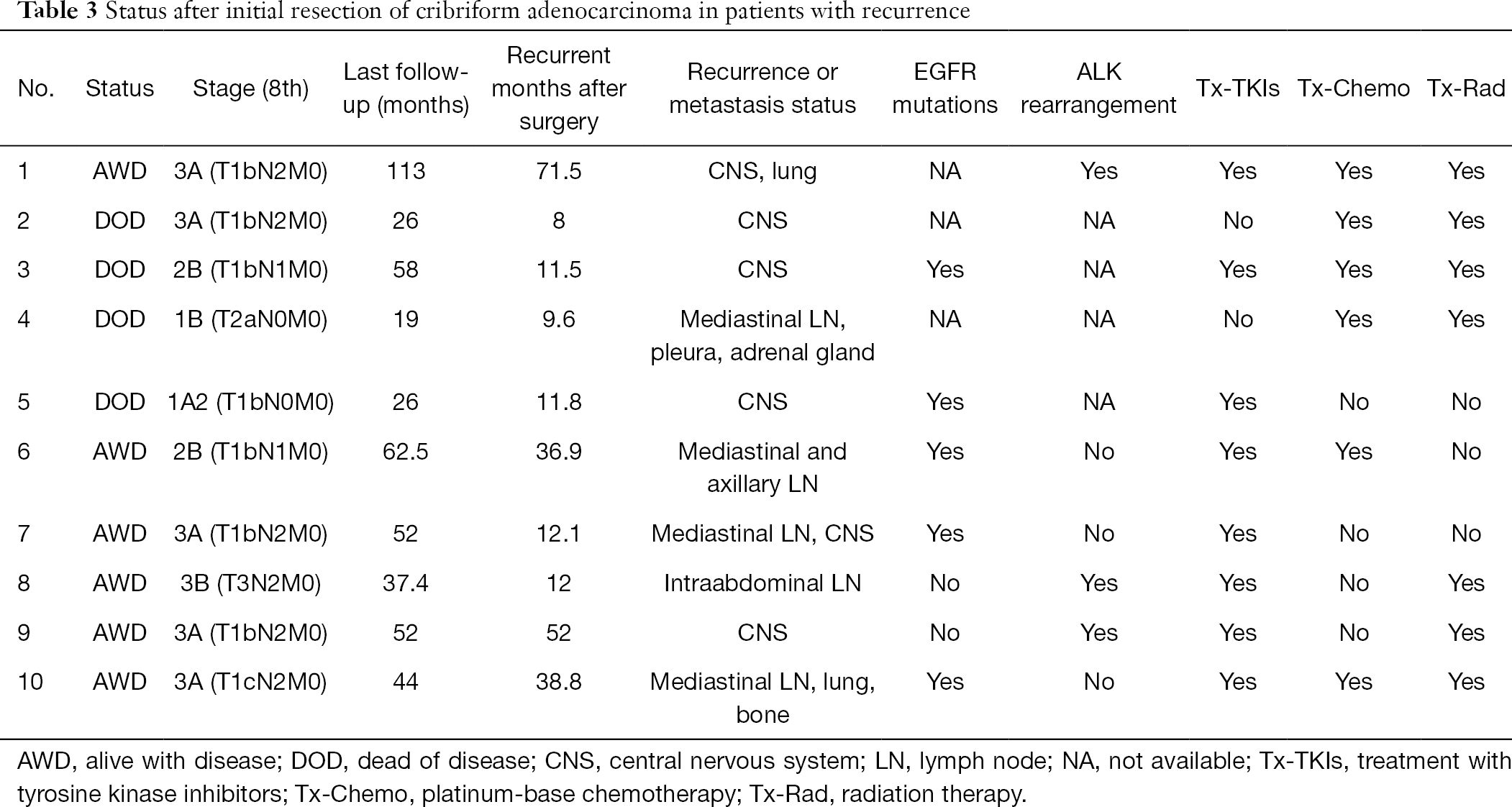 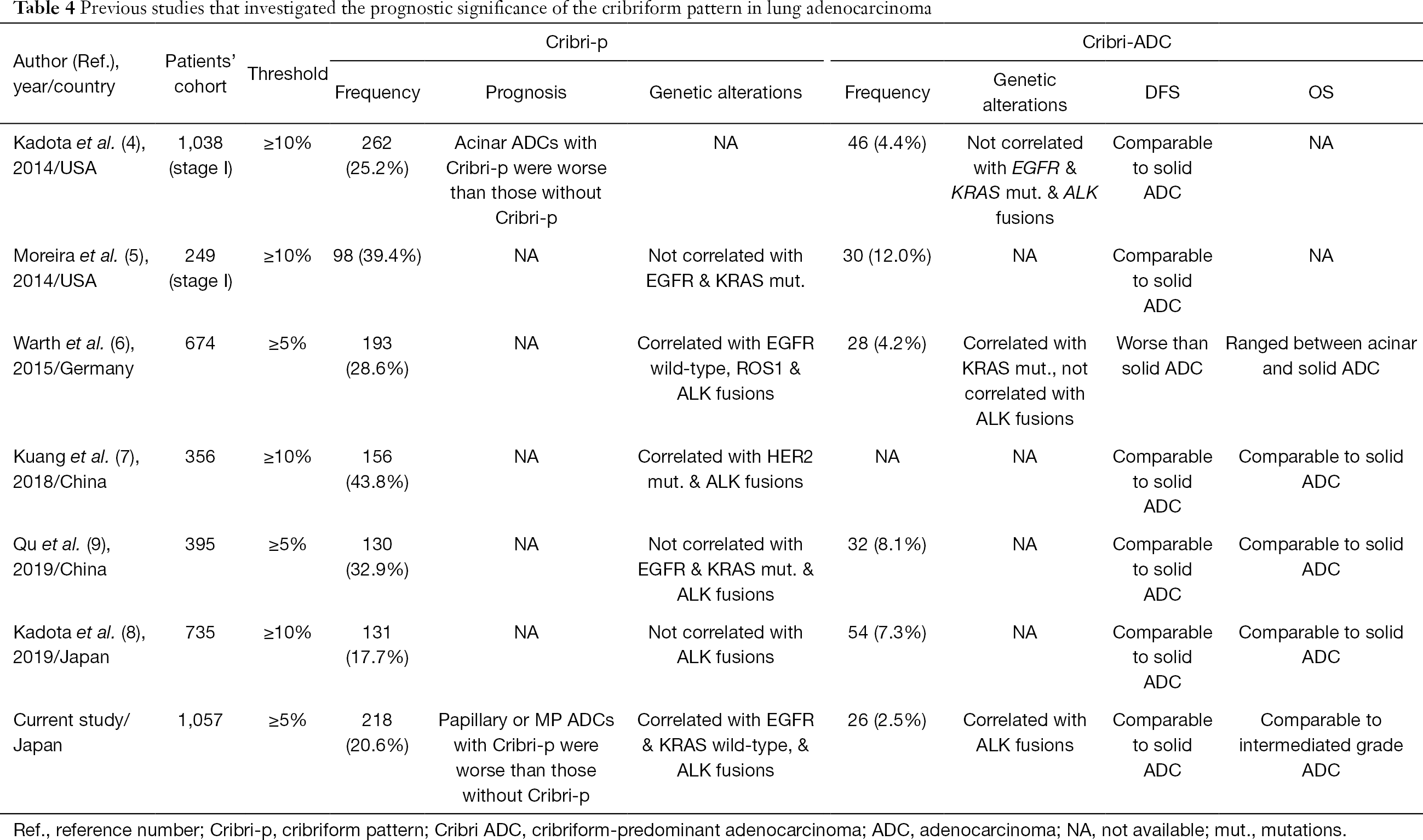 With respect to OS, three previous studies (7-9) demonstrated that patients with Cribri-ADC have relatively poor outcomes compared to patients with solid ADC. Warth et al. reported that the OS rates of patients with Cribri-ADC was in between those of patients with acinar ADC and solid ADC (6); our data were consistent with theirs. They suggested that the natural course of Cribri-ADC is aggressive but that these tumors might respond better to chemotherapy administered after relapse than would tumors of the other patterns. In the current study, eight of 10 patients who experienced recurrence harbored EGFR mutations or ALK rearrangements (data were not available for the other two), and six were alive with disease following treatment with TKIs.

Regarding the association between Cribri-p and gene alterations, earlier studies found that tumors with ALK rearrangements tended to exhibit Cribri-p (6,7,16,17), while others found no such association (8,9). As such, a clear link between these two occurrences has not been established. In our study, the presence of Cribri-p and Cribri-ADC was associated with ALK rearrangement. The discrepancy between the studies may be caused by differences in the thresholds and/or methodologies used for identifying gene alteration; hence, the relationship between gene alterations and Cribri-p ought to be investigated using uniform methods such as next-generation sequencing.

There were some limitations in this study, the most notable of which was the inter-observer agreement. Although we subclassified Cribri-p from acinar-pattern tumors after careful discussion, we noted some difficulty in distinguishing simple acinar glands from fused-glands because most were continuously present in the same regions. However, we consider that we can overcome interobserver disagreement by training to recognize the pattern carefully because our concordance rate was not very low when analyzing the selected 100 cases (data not shown). In contrast, if the Cribri-ADC is recognized as the sixth histological subtype of L-ADC, it will potentially be more difficult to reach interobserver agreement than it would be with the current scheme. Deep learning techniques may be promising to overcome this difficulty (18,19).

In addition, we also consider classification by tumor grading to be more optimal than determining the tumor subtype for predicting the prognosis (20). While some grading systems have been proposed, additional multi-center validation studies are needed. A second limitation was that some investigators set their Cribri-p cut-off values at 5% and others at 10%; we set ours at 5% because the percentage of each histological component is recorded in 5% increments per the 2015 WHO classification recommendations (3). As such, Cribri-p should be more strictly identified because the presence of other subtypes with Cribri-p appear to be associated with relatively poorer prognoses; this also requires future validation.

Our evaluation of the clinical significance of Cribri-ADC revealed that this pattern portends a poor prognosis with respect to recurrence, which is consistent with data from previous studies. However, most patients with recurrent tumors harbor druggable genetic alterations, such as EGFR mutations and ALK rearrangements, and are therefore responsive to TKIs. Given these results, we propose that TKIs should be added to the postoperative adjuvant therapy regimens administered to such patients. Furthermore, our findings suggest that Cribri-p should be recognized as a poor prognostic factor even when it is not a major tumor component.

Funding: This work was supported in part by JSPS KAKENHI Grant Number 17K08740.

Reporting Checklist: The authors have completed the STROBE reporting checklist. Available at http://dx.doi.org/10.21037/tlcr-20-612

Conflicts of Interest: All authors have completed the ICMJE uniform disclosure form (http://dx.doi.org/10.21037/tlcr-20-612). AY reports that grants from JSPS KAKENHI, during the conduct of the study. The other authors have no conflicts of interest to declare.

Ethical Statement: The authors are accountable for all aspects of the work in ensuring that questions related to the accuracy or integrity of any part of the work are appropriately investigated and resolved. The requirement for informed consent was waived owing to the retrospective nature of the study and all patients were provided the means to opt out of this study. The study was conducted in accordance with the Declaration of Helsinki (as revised in 2013) and the study protocol was approved by the Kyoto University Hospital ethics committee (R1158-2).