Large cell neuroendocrine carcinoma (LCNEC) comprises approximately 3% of lung malignancies in the United States. The annual age-adjusted incidence is 0.34 cases per 100,000 persons and is rising (1). About 55% of LCNEC is metastatic at time of diagnosis. Like small cell lung cancer (SCLC), LCNEC is a high-grade neuroendocrine tumor with poor prognosis and higher incidence in smokers (2). However, because of its rarity, treatment paradigms are much better established for SCLC than for LCNEC. Until recently, treatment for LCNEC had been based on extrapolation from treatment of SCLC and non-small cell lung cancer (NSCLC) or from small retrospective trials, which generally indicated some benefit from treatment with platinum-based chemotherapy (3-7).

Based on expert opinion and practice experience, for patients with early-stage disease, surgery is recommended as initial treatment (8). Two large, recent retrospective reviews indicate a benefit to adjuvant chemotherapy in patients with early stage, particularly stage IB, LCNEC (8,9). However, neither of these studies established the optimal regimen for such therapy nor the role of RT in treatment.

A number of recent prospective trials have evaluated the effectiveness of chemotherapy regimens traditionally used in NSCLC and SCLC in stage III‒IV LCNEC. Platinum-based combination therapy, frequently involving podophyllotoxins such as etoposide or camptothecins such as irinotecan, is standard of care for patients with advanced SCLC. Two multicenter prospective studies with 44 and 49 patients with stage III or IV LCNEC evaluated the efficacy cisplatin and etoposide or irinotecan in advanced LCNEC. Both studies had poor outcomes, similar to or inferior to those seen with SCLC (10,11). A recent retrospective study from the Netherlands compared platinum-etoposide chemotherapy to traditional NSCLC regimens of platinum compounds with gemcitabine, docetaxel, paclitaxel or vinorelbine. This study found a significantly increased median survival of patients receiving NSCLC platinum based regimens (8.5 months), when compared with patients receiving SCLC platinum based regimens (6.7 months) (12).

Despite these advances, data on the use of radiotherapy in LCNEC is severely lacking. Unlike in SCLC, prophylactic cranial irradiation is generally not recommended in LCNEC due to limited data on its efficacy (13,14). However, recent studies suggest that both stereotactic and whole brain irradiation have significant efficacy in patients with LCNEC metastatic to brain (15,16). Rare malignancies, such as LCNEC, are often best studied using large scale population-based databases with long term follow up such as the National Cancer Institute’s Surveillance, Epidemiology, and End Results (SEER) database. In this study, we used SEER data to evaluate the efficacy of surgery and RT in stage I-III LCNEC. We present the following article in accordance with the STROBE reporting checklist (available at http://dx.doi.org/10.21037/tlcr-20-374).

The SEER Program is the National Cancer Institute’s authoritative source for population-based cancer incidence and survival (17) and is considered the gold standard for cancer data collection internationally (18). It is populated with data from national cancer registries and encompasses approximately 34.6% of the United States population (17). The SEER Program is updated annually for follow-up on vital status and routinely undergoes quality-control checks. The study was conformed to the provisions of the Declaration of Helsinki (as revised in 2013). Ethical approval was waived as all research was conducted under and in accordance with the Data-Use Agreement for the 1975–2013 SEER Research Data File (SEER ID 13907, Nov 2015). Informed consent was not necessary as no identifiable data was accessed. Data were collected and analyzed as described in previous reports (19-27).

The following variables were collected and coded: age at diagnosis, sex, race, marital status, insurance status, ICD-0-3histology, primary site, AJCC 6th Edition Staging, AJCC 6th Edition T, N, M staging, surgery at primary site, and radiation. In SEER, all cancer-directed treatment is recorded only if it is given as part of the initial course of treatment to destroy, modify, control, or remove cancer tissue.

All statistical analyses were carried out using the IBM SPSS Statistics software package (International Business Machines Corporation, Armonk, New York). Associations between treatment and other variables were determined using the Pearson’s chi-square test. Because our predictors of interest may be closely related to each other, we tested for and found no evidence of multicollinearity (Table S1). Univariable and multivariable analyses of both overall survival (OS) and cause-specific survival (CSS) was conducted using the Cox Proportional Hazards Ratios (HR) model. 95% confidence intervals are expressed next to corresponding hazard ratios. Tests with two-tailed P values <0.05 were considered statistically significant. 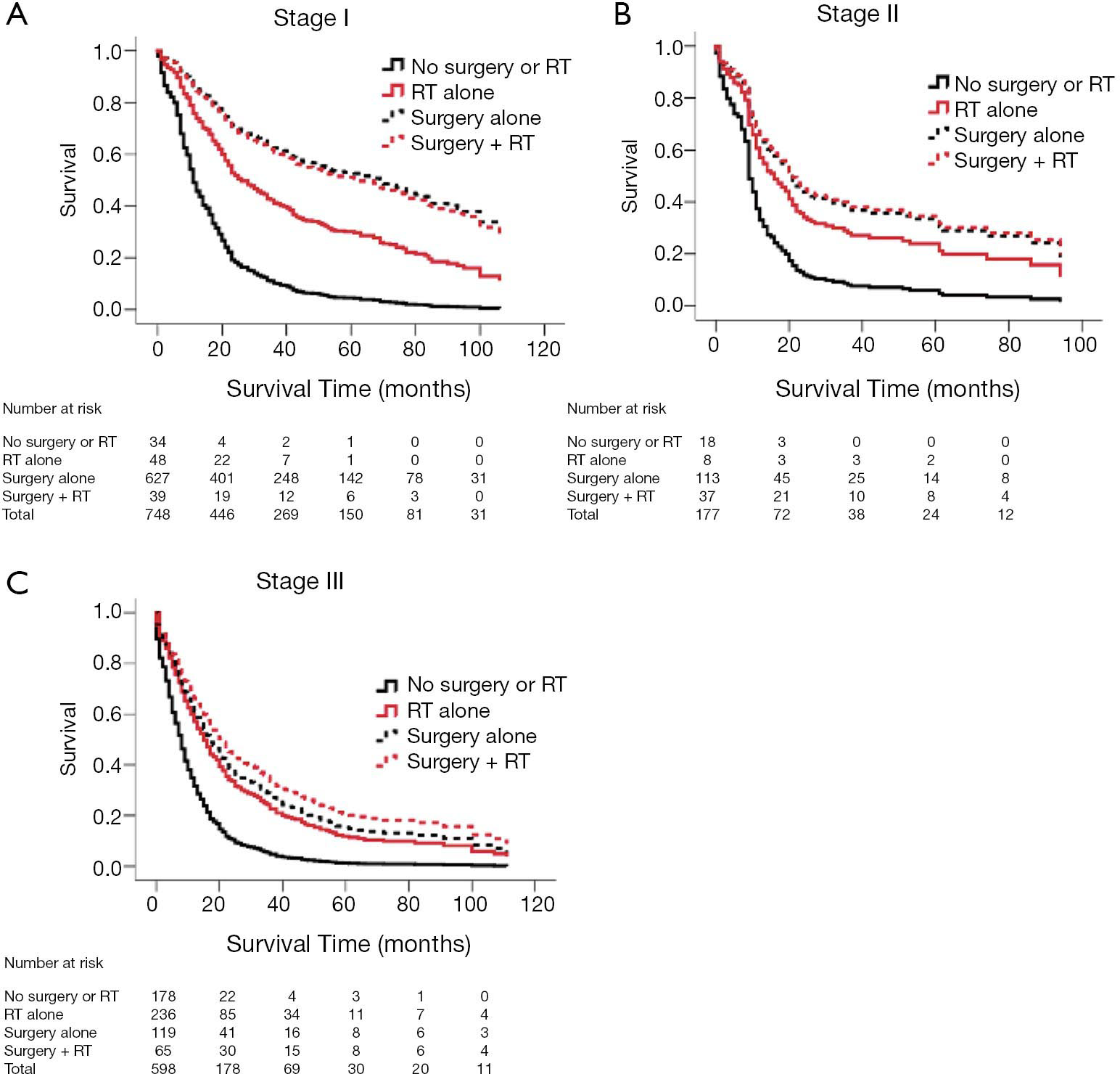 Figure 1 Cox-regression multivariable analysis of overall survival according to stage for RT, surgery, RT and surgery or neither surgery nor RT (A,B,C). Variables included in the model are displayed in Tables S5-S7. RT, radiotherapy.

Our results indicate that surgery remains the mainstay of therapy in stage I and II LCENC. In patients who are not candidates for surgery or prefer nonoperative management, radiation therapy offers significant benefit in stage I disease and possibly in stage II disease. In patients with stage I and II disease who did receive surgical treatment, adding radiation therapy does not appear to confer any additional survival benefit.

Similarly, in stage I and II NSCLC radiation therapy is generally not indicated after surgical resection, except in cases of positive margins and local recurrence where it has shown some benefit (29,30). In nonsurgical candidates, radiation therapy is clearly beneficial for local treatment in NSCLC and is standard of care, with local control rates as high as 90% (31,32).

Radiation therapy has a much more established role in the treatment of limited stage SCLC with large prospective trials and meta-analyses showing significant benefits to radiation as definitive treatment in these patients (33,34). SCLC is so aggressive and radiation-responsive that prophylactic cranial irradiation is a cornerstone of treatment in many patients with SCLC (35).

Our data indicate that LCNEC outcomes with regards to surgical and radiation therapy more closely mirror those of patients with NSCLC, and NSCLC treatment paradigms with regards to RT may have utility in the treatment of LCNEC. This correlates with recent studies showing that chemotherapy regimens effective in NSCLC have considerable efficacy in LCNEC despite its neuroendocrine origins (12).

In patients with stage III disease, surgery and radiation therapy were not used in 30% of patients. However, both of these treatment modalities conferred significant benefit. Treatment with both radiation and surgery trended towards the best survival outcomes, despite being used in only 11% of patients.

Many clinical factors that influence management decisions and survival in patients with LCNEC are not included in the SEER database, and therefore could not be controlled for in our univariable and multivariable analyses. Notable variables which could not be controlled for include patient comorbidities and treatment adequacy of radiation and surgery. This may have led to significant bias in our outcomes analyses. In particular, patients with better anticipated prognosis will often receive more aggressive treatments, including radiation and surgery, and have superior ultimate outcomes. This may lead to systemic bias that could not be adjusted for.

The decision to pursue surgery in stage III LCNEC also involves many clinical judgments such as burden of metastatic disease and tumor size and location, which were not fully reflected in the data available through SEER.

Another significant limitation is that the lack of chemotherapy data present within the SEER database. This limited our understanding of the treatment that these patients received as well as the comparisons that we were able to make. SEER also does not include data on whether patients received stereotactic body radiation therapy or conventionally fractionated radiation therapy. Finally, the overall concordance of documented radiation treatment between SEER and SEER-Medicare is 91% (36). However, the underreporting of radiation treatment in SEER would likely bias our results towards the null hypothesis, rather than exaggerate the effects size of our findings (37).

Pathologic diagnosis can be difficult to establish in patients with LCNEC, especially in those for whom only cytology or small biopsy specimens are available. We could not confirm the pathologic diagnoses recorded in the SEER database. Additionally, the co-existence of LCNEC with other subtypes of lung cancer, including SCLC and other NSCLC, is unknown. These limitations may have led to the inclusion of patients who did not have LCNEC, possibly limiting the external validity of the findings.

The most important direction for future study of the efficacy of these modalities in the treatment of LCNEC are further prospective data comparing patient outcomes based on treatment approach. While our study leaves little doubt that surgery is beneficial to survival, especially in patients with early stage disease, a randomized control trial comparing surgery alone to radiation plus surgery in patients with LCNEC has the potential to be useful and ethical. This would be an especially useful question to answer in patients with positive margins or local recurrence after resection, and would allow for standardization of radiation approach across patients.

Due to the rarity of the disease, treatment paradigms for LCNEC are controversial and based largely upon small retrospective studies and smaller prospective trials. Our results indicate that that non-metastatic LCNEC may be treated as a NSCLC with respect to radiation. Prospective studies are necessary to increase our understanding of optimal treatment regimens for LCNEC and would be especially useful in defining the role of radiation in patients with positive margins or local recurrence after surgery.

A preliminary version of this study was accepted by the American Society of Radiation Oncology Annual Meeting 2019 (September 15–18, 2019, Chicago, Illinois) as an abstract.

Reporting Checklist: The authors have completed the STROBE reporting checklist. Available at http://dx.doi.org/10.21037/tlcr-20-374

Ethical Statement: The authors are accountable for all aspects of the work in ensuring that questions related to the accuracy or integrity of any part of the work are appropriately investigated and resolved. The study was conformed to the provisions of the Declaration of Helsinki (as revised in 2013). Ethical approval was waived as all research was conducted under and in accordance with the Data-Use Agreement for the 1975-2013 SEER Research Data File (SEER ID 13907-Nov 2015). Informed consent was not necessary as no identifiable data was accessed.