Advances in next generation sequencing have led to the identification of molecular alterations in non-small cell lung cancer (NSCLC), including mutations, fusions, increased tumor mutation burden, and copy number aberrations (CNA), among others. However, understanding the complex genetic landscape in NSCLC remains challenging, as only a small proportion of these alterations likely have clinical significance.

Previous LACE-Bio studies evaluated the prognostic and predictive role of KRAS mutations, and KRAS/TP53 co-mutations in early stage NSCLC (1,2). No clear prognostic or predictive role was detected, although a potentially negative predictive effect of TP53/KRAS co-mutation (2), and a possible deleterious effect of adjuvant chemotherapy in patients with a KRAS codon-13 mutation require further investigation (1). The KRAS oncogene is mutated frequently in NSCLC, particularly adenocarcinoma (3-5); however, the clinical impact of KRAS CNAs is unclear. Evaluation of the genome of primary lung adenocarcinomas by Weir et al. revealed areas of copy number amplification at 12p12.1, a region known to harbor the KRAS oncogene (6). Likewise, characterization of gene CNAs in resected NSCLC by the LACE-Bio consortium showed KRAS copy number gains; however, no significant association between KRAS CNA and survival was observed (7).

The prognostic and predictive role of concomitant KRAS mutations and CNA has not been well elucidated. Sasaki et al. showed that NSCLC patients with KRAS mutated tumors and increased copy number had worse prognosis compared to those with KRAS WT tumors with no increase in copy number; however, their study was limited by a small number of patients (10). In the current study, we completed a pooled analysis of LACE-Bio data to characterize the prognostic effect of KRAS mutation status and concomitant CN gain in early stage NSCLC, and to determine the ability to predict survival benefit from adjuvant chemotherapy. We hypothesized that concomitant KRAS mutations and CN gain would be prognostic of worse survival compared to KRAS mutations alone and that patients with mutation and CN gain might have the greatest potential to benefit from adjuvant chemotherapy.

We present the following article in accordance with the REMARK reporting checklist (available at http://dx.doi.org/10.21037/tlcr-20-927).

The LACE (Lung Adjuvant Cisplatin Evaluation)-Bio group conducts meta-analyses of data from 3 adjuvant randomized clinical trials [JBR.10, IALT (International Adjuvant Lung Cancer Trial), ANITA (Adjuvant Navelbine International Trialist Association)] comparing cisplatin-based chemotherapy versus observation, and CALGB-9633, which compared carboplatin-based chemotherapy versus observation (11-16). The LACE-Bio collaboration includes bio-banked tissue samples prospectively collected from JBR.10 and CALGB-9633, as well as retrospective samples from the IALT group (7,17). In this study, clinical and genomic data from the LACE-Bio consortium were used to evaluate the prognostic and predictive effect of concomitant KRAS mutation and gene CNAs in early stage NSCLC patients. All procedures performed in this study were in accordance with the Declaration of Helsinki (as revised in 2013).

The Kaplan-Meier method and log-rank test were used to compare survival curves between the four groups mentioned above. KRAS mutation status, and concomitant KRAS CNA and mutational status were separately correlated to survival endpoints using a Cox proportional hazards model, which was stratified by trial in all models, adjusted for treatment in the unadjusted model, and adjusted for treatment, age, sex, tumor stage, nodal stage, histology, WHO performance status and surgery type in the fully adjusted model. For KRAS mutation status, the WT group was the reference category, and the HR was reported for MUT versus WT group. For the concomitant KRAS CNA and mutation status, WT + Neut/Loss was the reference category, and the HR for a given category (MUT + Gain, MUT + Neut/Loss or WT + Gain) was interpreted as the relative hazard for that category versus the WT + Neut/Loss category. To evaluate the predictive role of concomitant KRAS CNA and mutation status, a treatment-by-variable interaction was added to the Cox models stratified by study. For each endpoint, we compared the treatment effect across four concomitant KRAS CNA and mutation status groups by using the ratio of HRs (rHR): the ratio of the HR for adjuvant chemotherapy versus observation in a given category ‘c’ (MUT + Gain, MUT + Neut/Loss or WT + Gain) to the HR for adjuvant chemotherapy versus observation in the WT + Neut/Loss category (rHR = HR(Chemo vs. Obs. in c)/HR(Chemo vs. Obs. in WT + Neut/Loss)). A rHR <1.0 indicates that the treatment effect size was greater for category ‘c’ than for WT + Neut/Loss patients. Given that KRAS mutations occur primarily in the adenocarcinoma group, analyses were also performed separately for this subtype. Statistical significance was set at P<0.05. All statistical analyses were performed using the ‘Survival’ and the ‘survminer’ packages in R software version 3.6.2. 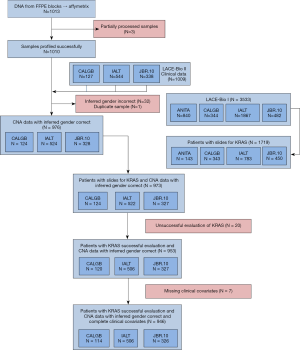 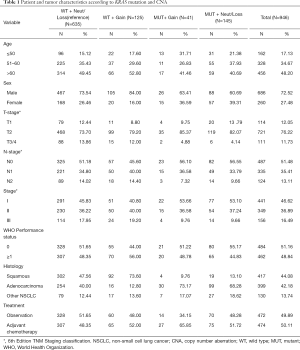 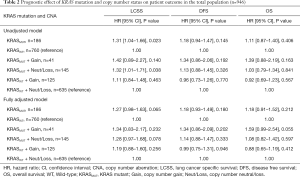 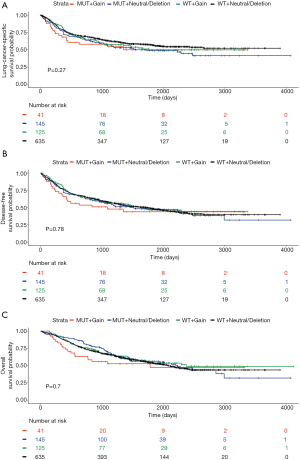 In the adenocarcinoma subgroup, there was no significant prognostic effect of KRAS mutation and CNA on LCSS, DFS or OS (Table S4). However, there was a non-significant trend towards worse OS (HR =1.51; 95% CI, 0.84–2.72, P=0.169) when KRAS MUT + Gain was compared directly to KRAS WT + Neut/Loss in adenocarcinoma patients (results not shown). 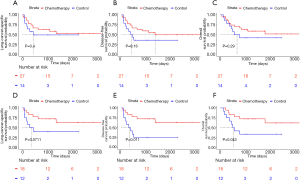 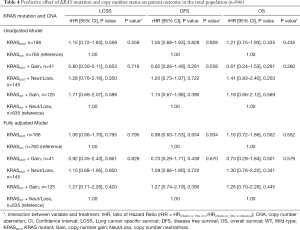 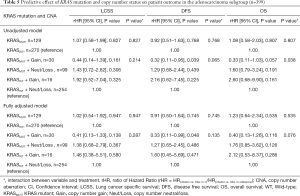 Singh et al. showed a significant correlation between KRAS gene amplification and KRAS-dependency. Moreover, increased gene copy number in KRAS-mutated tumors has been associated with elevated KRAS mRNA and protein expression (9,19). Perhaps there is a selection for copy number gain in tumors that already harbor a KRAS mutation, thereby conferring dependency on the KRAS oncogene for growth and survival. Studies suggest that KRAS oncogene addiction might play a role in early tumor initiation, with preclinical data showing development of early onset lung cancer in mice harboring mutations in KRAS (20). However, although KRAS mutations alone have been shown to promote lung tumor formation, additional genomic alterations are likely required for ongoing tumor progression (21). It is plausible that gene amplification is acquired in KRAS-dependent tumors to aid in tumor progression. Newnham et al. compared resected and recurrent NSCLC tumors and showed differential gene expression suggesting that concomitant KRAS mutations with CN gain might be implicated in tumor recurrence clinically (3). Moreover, preclinical models show that copy number gain in KRAS-mutated tumors appears to select for enhanced glycolytic metabolism (a compensatory mechanism to promote survival in tumors with mitochondrial defects), and might also be involved in increasing metastatic potential in lung cancer cells (21). Interestingly, we previously showed an increased risk (HR =2.76; 95% CI, 1.34–5.70, P=0.005) of developing a second primary cancer in patients with KRAS-mutated tumors (1). The impact of concomitant KRAS mutation and gene copy number gain on cell survival, tumor recurrence, or the development of second primary cancers is unclear, and should be further investigated to determine if this might explain the observed trend towards worse survival in KRAS MUT + Gain patients.

Variable responses to chemotherapy have been reported in KRAS-mutated tumors, and may depend on the subtype of the KRAS mutation (22,23). Garassino et al. reported a decreased response to cisplatin but increased response to paclitaxel and pemetrexed in KRAS G12C mutated tumors, whereas, KRAS G12D mutations appeared to be resistant to paclitaxel, and G12V mutations were highly sensitive to cisplatin but slightly more resistant to pemetrexed (23). Shepherd et al. previously reported variability in the effect of adjuvant chemotherapy on survival based on KRAS mutation subtypes, with worse DFS (HR =3.88; 95% CI, 1.44–10.46, P=0.007, interaction P=0.01) and OS (HR =5.78; 95% CI, 2.06–16.2, P=0.001, interaction P=0.002) observed in patients with KRAS codon 13 mutations who received adjuvant chemotherapy (1). In addition, a potential deleterious effect of adjuvant chemotherapy was seen in patients with KRAS/TP53 co-mutations when compared to WT/WT tumors (HR =2.49; 95% CI, 1.10–5.64, P=0.03) (2). However, due to small patient numbers, these data require further validation. In contrast, we found that KRAS MUT + Gain was associated with a higher beneficial effect of chemotherapy on DFS (rHR =0.33; 95% CI, 0.11–0.99, P=0.048) compared to the WT + Neut/Loss group in adenocarcinoma patients, with a non-significant trend also seen for LCSS (rHR =0.41; 95% CI, 0.13–1.33, P=0.14) and OS (rHR =0.40; 95% CI, 0.13–1.26, P=0.12) on multivariable analysis. A similar higher beneficial effect of chemotherapy on DFS and OS was also noted in KRAS MUT + Gain patients compared to WT + Neut/Loss patients in the total population, but this benefit may be driven by the adenocarcinoma subset. It is possible that KRAS MUT + Gain patients have an increased dependency on KRAS activation, which might lead to increased susceptibility to chemotherapy, leading to a decrease in risk for tumor recurrence. Whether this hypothesis might explain the higher beneficial effect of chemotherapy on DFS observed in our study is still to be determined, and additional studies are required to elucidate the mechanism by which KRAS MUT-Gain patients might be more responsive to chemotherapy.

There are limitations in this study. The KRAS mutation analyses were pooled from separate trials; therefore, there were differences in technique and laboratories used for testing. Secondly, we were unable to evaluate the predictive or prognostic role of different KRAS mutation subtypes in patients with KRAS mutations and CNA due to the small numbers in each group. This further highlights the need for pooled analyses to ensure adequate sample numbers for robust analyses for less common genetic alterations. Finally, we did not have complete smoking history data from all trials included in the current study; therefore, survival analyses adjusting for smoking status could not be completed due to the small sample size.

In summary, the current LACE-Bio analysis showed that concomitant KRAS mutations and copy number gain are rare, occurring in approximately 4% of NSCLC patients. Although not significant, there was a trend towards worse LCSS, DFS and OS in KRAS MUT + Gain patients relative to WT + Neut/Loss patients. In addition, concomitant KRAS mutation and CN gain appeared to predict for better DFS in adenocarcinoma patients treated with adjuvant chemotherapy, with a trend towards better LCSS and OS as well. However, these results could be driven by the small number of patients and require further validation.

Reporting Checklist: The authors have completed the REMARK reporting checklist. Available at http://dx.doi.org/10.21037/tlcr-20-927

Ethical Statement: The authors are accountable for all aspects of the work in ensuring that questions related to the accuracy or integrity of any part of the work are appropriately investigated and resolved. All procedures performed in this study were in accordance with the Declaration of Helsinki (as revised in 2013).