With a prevalence of 10.2% among people more than 40 years old around the world, chronic obstructive pulmonary disease (COPD) seems to be a rather prevalent respiratory disease (1). COPD is a disease with insidious onsets and a poor prognosis. More than 70% COPD patients are at stage 1 or 2 of Global Initiative for Chronic Obstructive Lung Disease (GOLD), with very mild respiratory symptoms such as Shortness of Breath on Exertion (SOBOE). As a result, few of them would seek medical consultations before acute exacerbation (2,3).

COPD is an inflammatory disease of the respiratory system and is considered as a risky element of lung cancer (4). A comprehensive review of studies reported some possible pathogenic mechanisms to explain the potential association between COPD and lung cancer (5). Other literature suggested that the severity of COPD was positively correlated with the development of lung cancer (6,7). Inflammation is also associated with lung cancer. Some studies found that chronic inflammation was involved at the onset of lung cancer through some mechanisms, which were partially independent of smoking (8,9). Therefore, it is reasonable to carry out some research on early anti-inflammatory therapy in COPD patients to prevent malignant transformation.

Some cohort studies showed that inhaled corticosteroids (ICs) may delay or prevent the incidence of lung cancer to some extent (10-12). Nevertheless, some cohort studies showed that compared with general population, COPD patients using ICs demonstrated an increased risk of lung cancer (13,14). Therefore, the protective effect of ICs for lung cancer in COPD patients was not clear. We performed a systematic review including a meta-analysis to determine the exact effect of ICs of lung cancer in COPD patients. We present the following article in accordance with the Preferred Reporting Items for Systematic Reviews and Meta-Analyses (PRISMA) reporting checklist (available at: http://dx.doi.org/10.21037/tlcr-20-1126).

PubMed (update to February 2020), EMBASE (from 1980 to February 2020), Web of Science (update to February 2020), and Medline (from 1966 to February 2020) were comprehensively searched to identify longitudinal epidemiological studies. We amalgamated “inhaled corticosteroids” or “ICs” or “chronic obstructive pulmonary disease” or “COPD” with “lung cancer”, “neoplasm” and “tumor”, along with their Medical Subject Headings (MeSH) terms. In addition, we conducted manual searches of the reference lists originating from materials published in academic conferences and retrieved review articles. We would contact the corresponding authors for supplementary data when important information was missing. All searched results were evaluated according to the PRISMA statement (15). Protocol of this study was registered in the Prospective Register of Systematic Reviews (PROSPERO CRD42020159082).

The Newcastle Ottawa Scale (NOS) was used to evaluate the methodological quality of the selected studies (16) (Table 1), including selection (4 items), comparability (1 item), and outcome (3 items). Any disagreement was resolved by consensus. 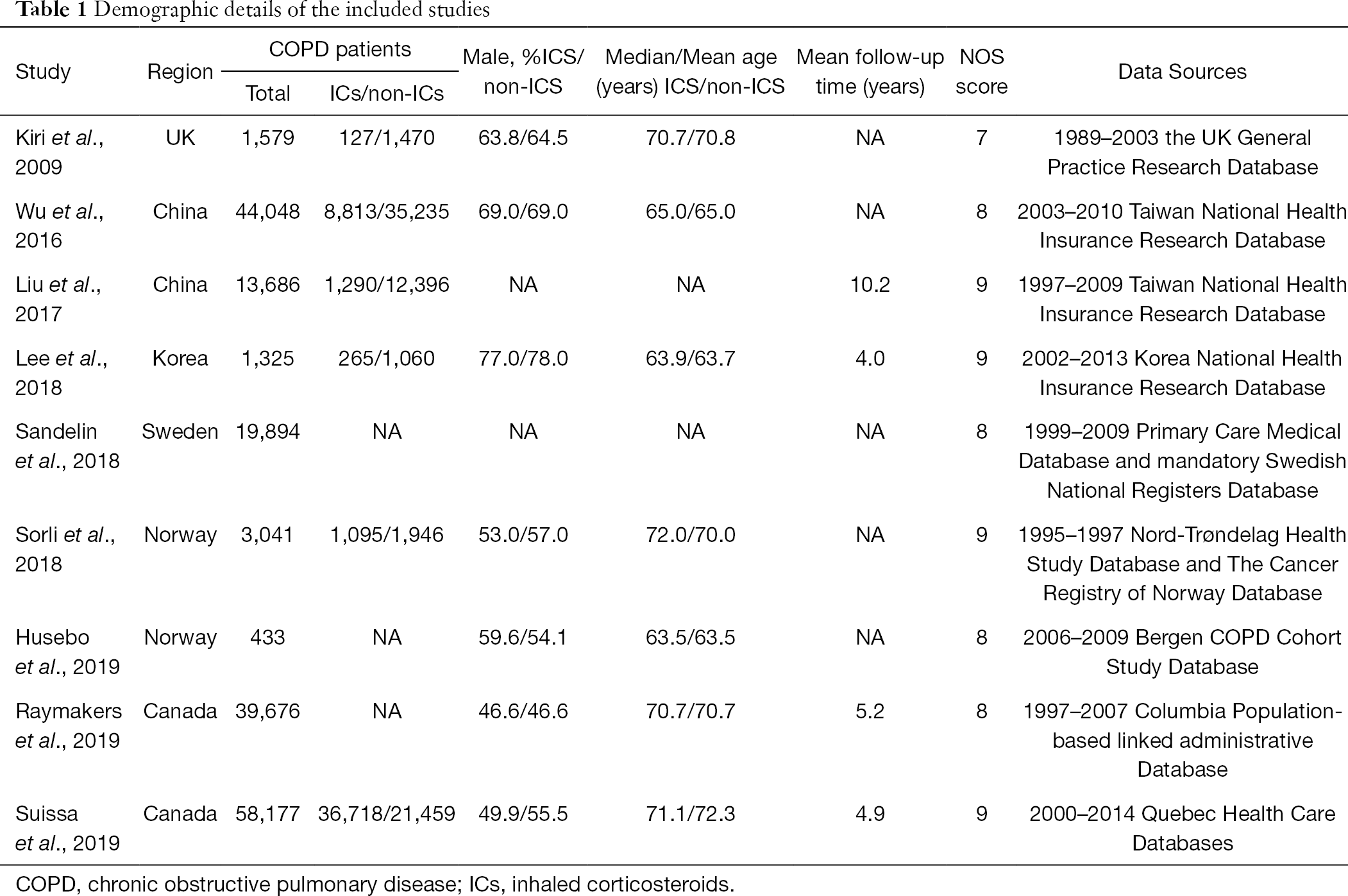 Dichotomous data were extracted using crude HRs or adjusted HRs with 95% CIs. We restricted analyses to studies that adjusted for at least three of the following known confounders: age, gender, body mass index, smoking situation, socioeconomic status, and comorbidities. Adjusted HRs were used in preference wherever available. To avoid the potential heterogeneity existed between studies, we used random-effects model to synthesize HRs and 95% CIs for ICs users versus non-ICs users to determine the risk of lung cancer. Cochran’s Q test and the I2 statistic were used to assess the heterogeneity. Significant heterogeneity was considered in pooled statistics when P-value ≤0.05 and I2 statistic ≥50%. Stratified analysis based on patients’ age (70 years or older, <70 years) and region (Europe, Asia, North America) were carried out. Additionally, we performed sensitivity analyses after the sequential removal of each study. Publication bias was evaluated by conducting Begg’s test and Egger’s test, and significant publication bias was set as P value <0.05. All analyses were conducted using STATA 15.0 software (STATA Corp, College Station, TX, USA). All the P values were 2-tailed; statistical significance was set as P value <0.05.

Our search identified 816 potentially eligible published studies. 225 of them were excluded after screening the title and abstract. 45 articles were excluded because the data were not displayed in a suitable format for synthesis. Finally, 9 studies (11-14,17-21) met the inclusion criteria and were included in the meta-analysis (Figure 1). 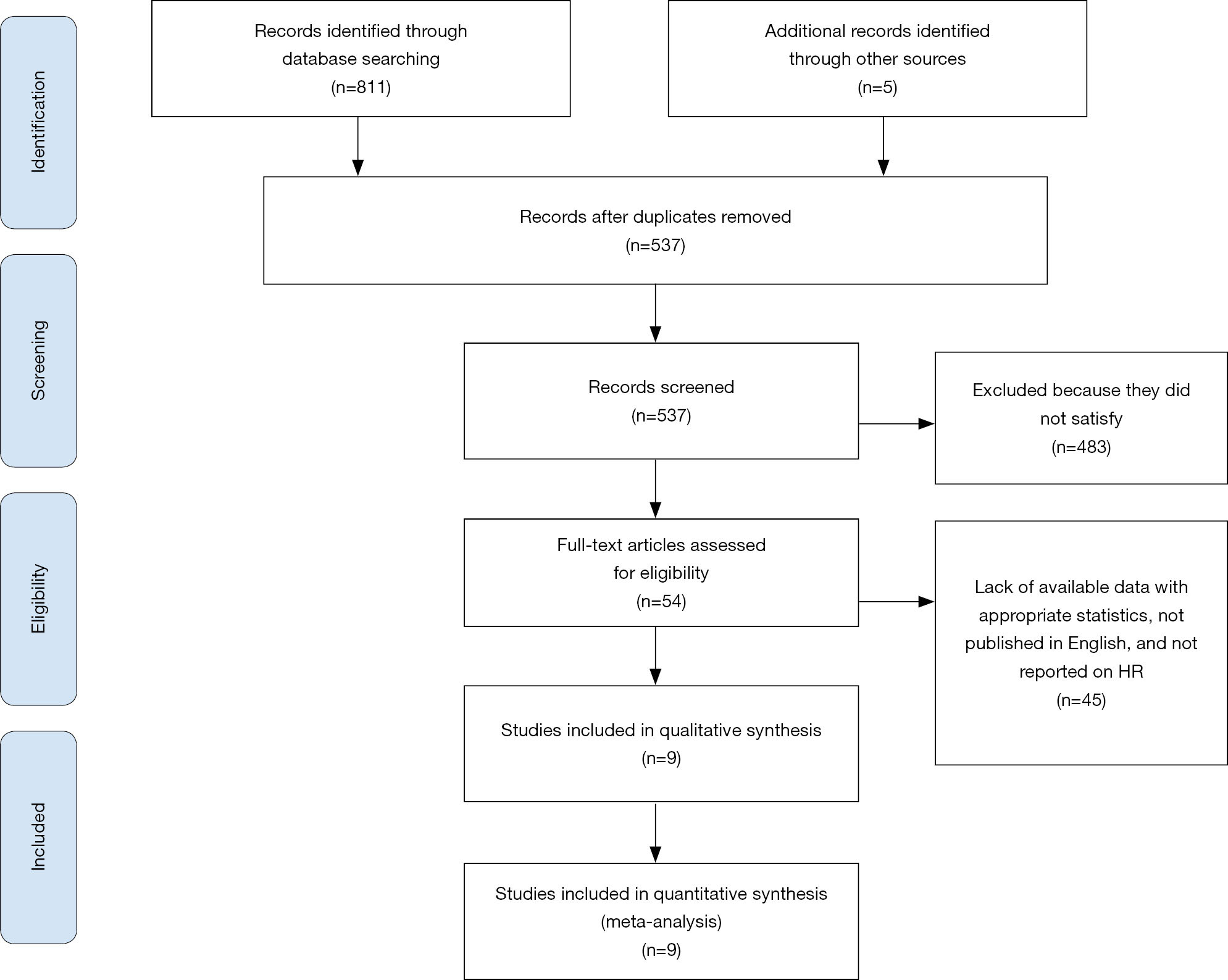 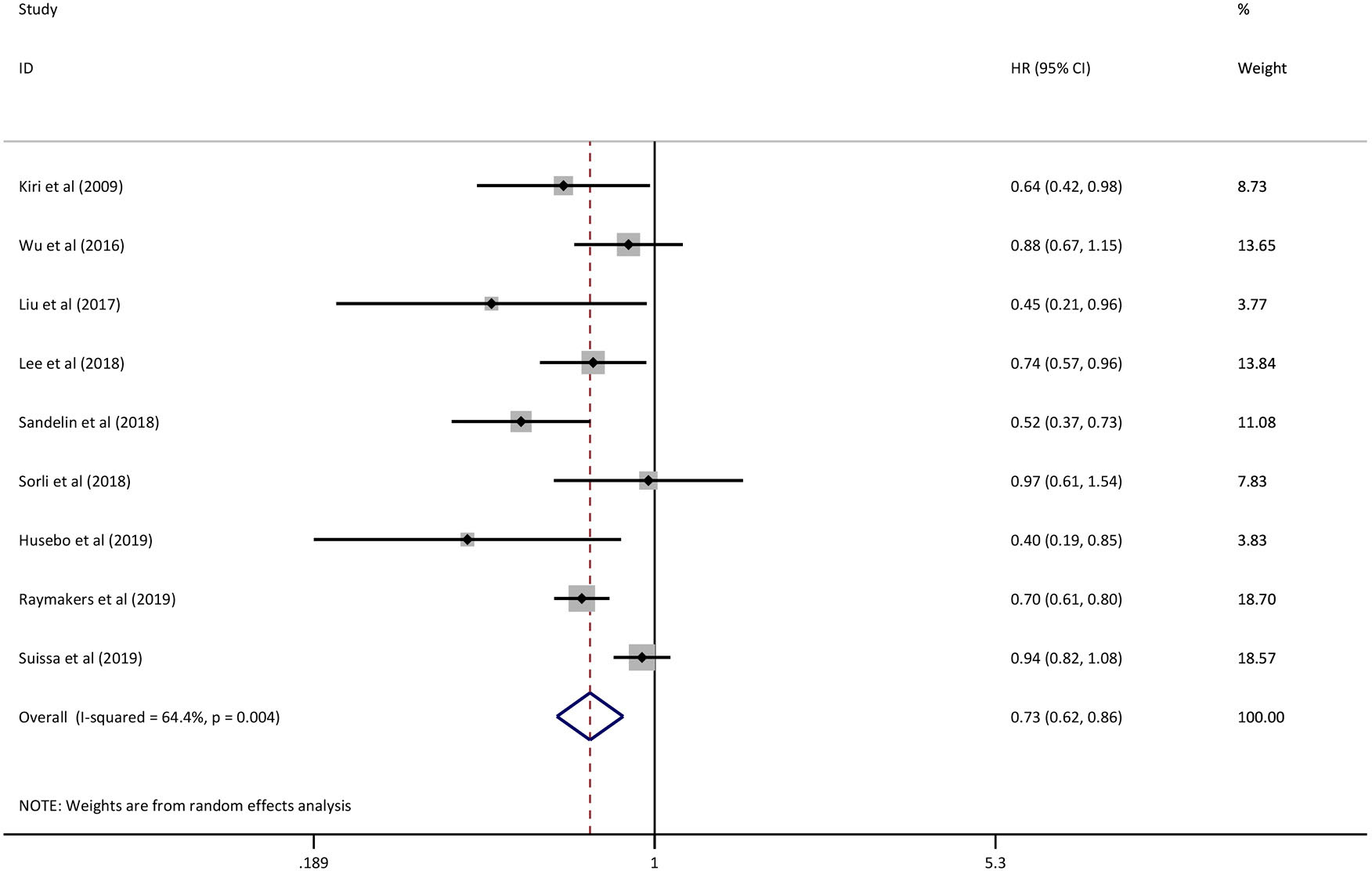 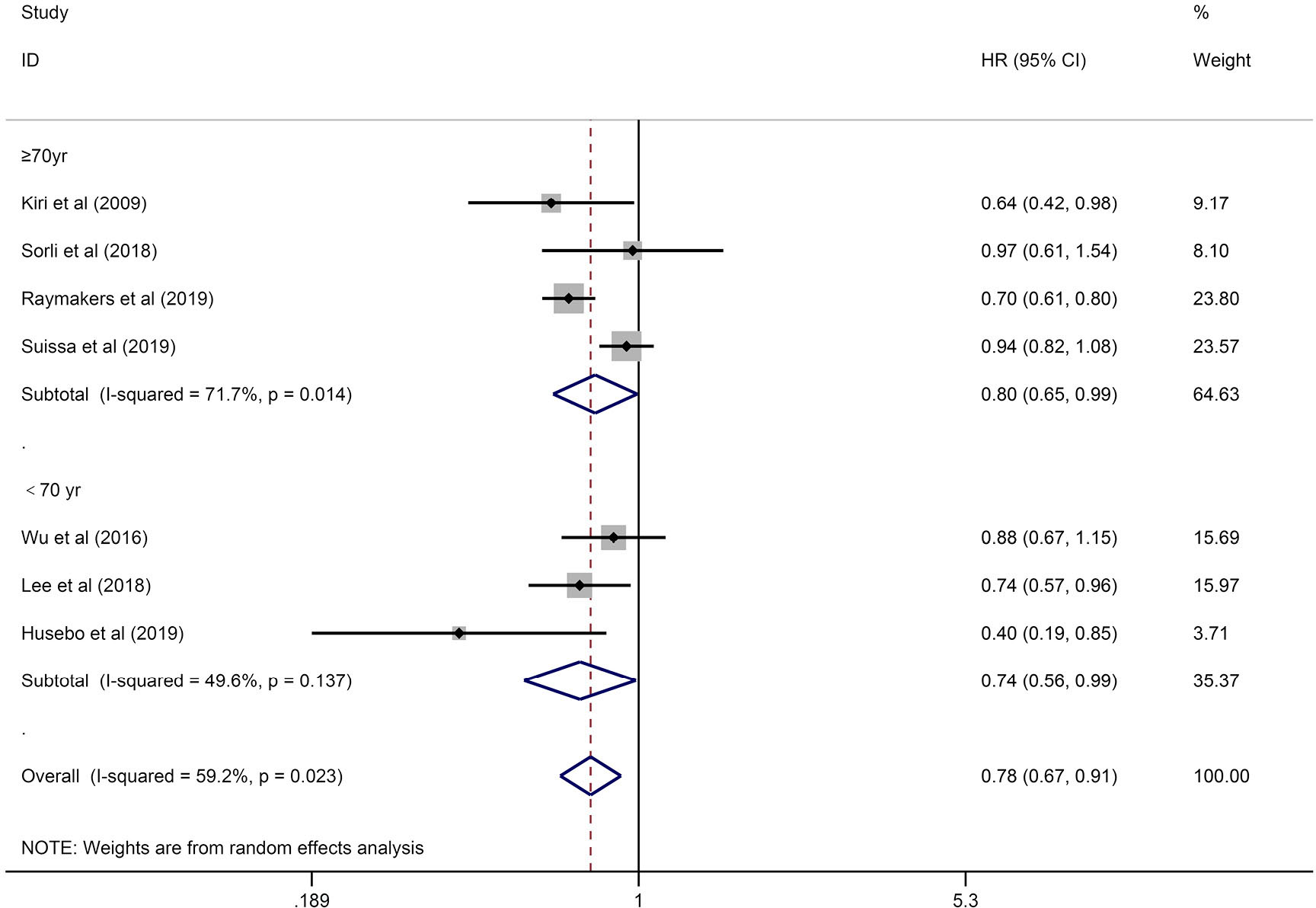 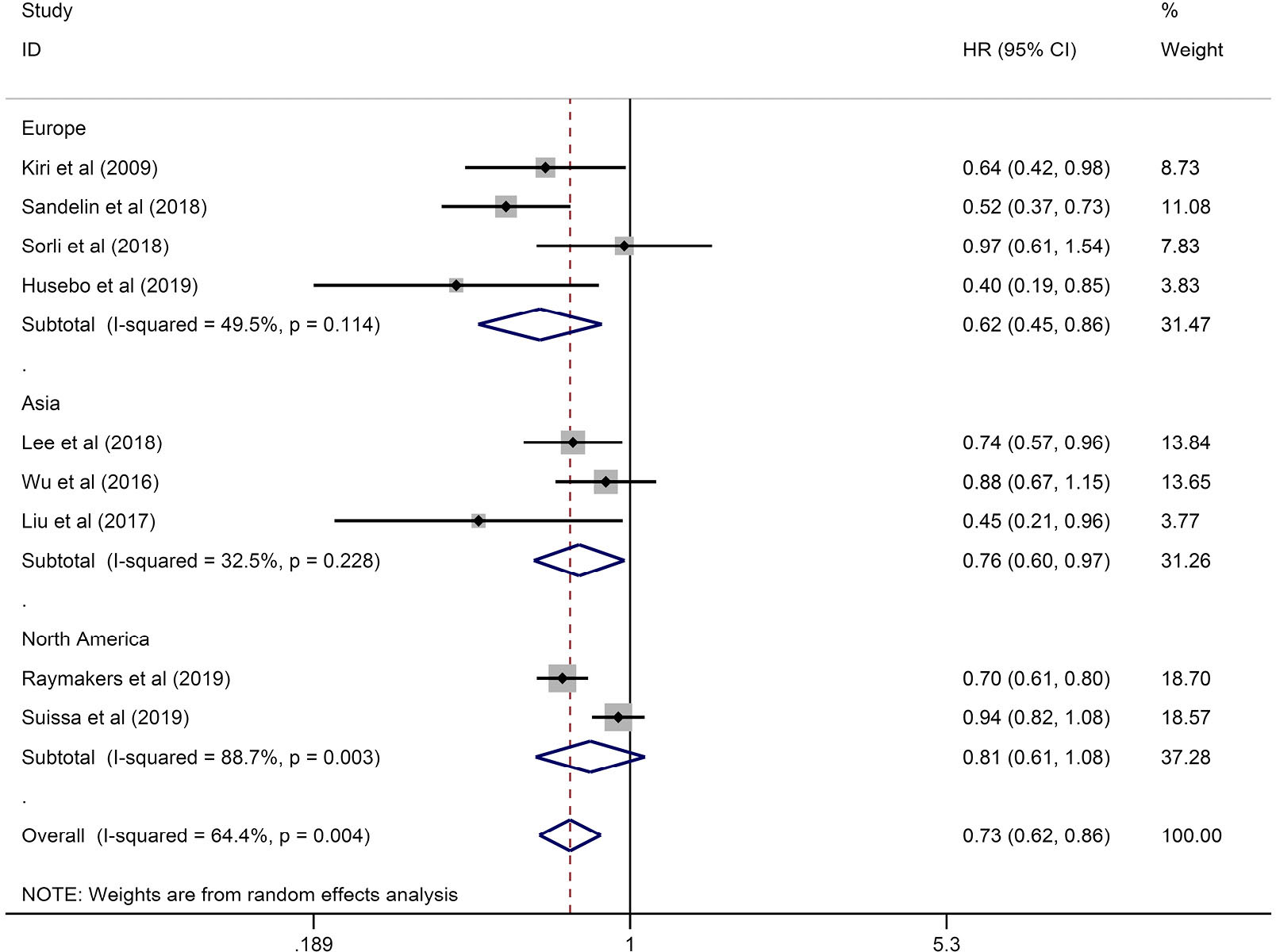 Sensitivity analysis showed that the removal of any of the studies do not influence the results (Table 2). It is worth mentioning that when the study of Suissa (13) was removed, the heterogeneity was eliminated but the result was stable (HR: 0.70, 95% CI: 0.60–0.81; P<0.001), suggesting that the study could be the potential source of inter-study variability. Furthermore, results of Egger’s test (P=0.191) or Begg’s test (P=0.602, Figure 5) showed no evidence of publication bias for lung cancer analyzed in COPD patients. 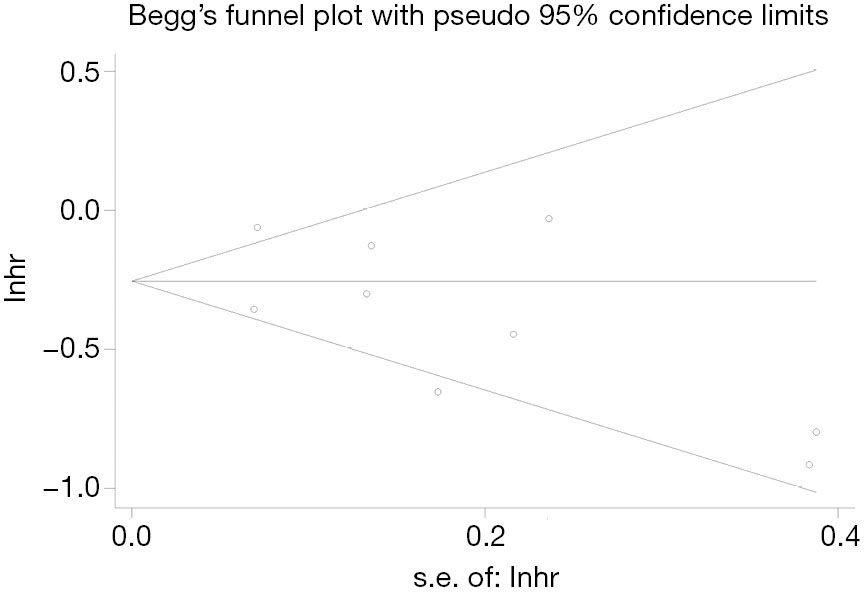 Our study was aiming at exploring whether ICs have a protective effect against lung cancer in COPD patients. We found that ICs were associated with a decreased risk of lung cancer in patients with COPD and the outcome was consistent among different age groups and region groups.

A previous meta-analysis has shown that ICs reduced neutrophil and lymphocyte counts in bronchoalveolar lavage fluid from patients with COPD, which suggested that the use of ICs could decrease airway inflammation (22). Therefore, the immunomodulatory effect of ICs on the airways of COPD patients may play an important role in reducing the risk of lung cancer. In recent years, basic studies indicated that COPD may possibly triggered through initial epithelial activation. As the first line defense for external invasion, the epithelial cells act as a barrier to infectious organisms and toxic particles produced from entities (23). Moreover, epithelial cells also produce various antioxidant, antibacterial, anti-protease factors and have tight junctions which could deny any entry of foreign entities and prevent them from damaging or destroying the inner lung mucosa (24,25). In COPD patients, the phlegm-thickened mucus, impaired ciliary function, and chronic exposure to external invasions may cause observable changes to the normal structures of the epithelium (26), which called epithelial–mesenchymal transition (EMT) (27). EMT is a process by which epithelial cells progressively lose cellular polarity and adhesiveness, thus become migratory and assume a mesenchymal phenotype (28-30). The characteristics of EMT are as follows: (I) increased cellular expression of mesenchymal biomarkers such as vimentin and S100A4 (31), which is higher in basal cells especially (32,33); (II) reticular basement membrane (Rbm) fragmentation owing to epithelial matrix metalloprotease (MMP) activity, especially the increase of MMP-9 (collagenase/gelatinase) (31). Additionally, as the prominent feature of EMT, increased Rbm could lead to the formation of a pro-cancer stroma (34). More and more evidence (35-37) has shown that EMT may lead to the elevated risk of lung cancer in patients with COPD. Indeed, epithelia with active EMT are potentially delicate to malignant transformation (38), and EMT in airways of COPD patients may well be the vital bridge between airway fibrosis and cancer development (39). Furthermore, Mahmood et al. (40) found that there were strong correlations between the activity of EMT in the leading edge of invasive malignancies and the activity of EMT in the nonmalignant airway areas from which the neoplasm originated. On the other hand, ICs protective effect on lung cancer in COPD patients may also be linked to EMT. Recently, Sohal et al. (41) showed that ICs were effective in decreasing mesenchymal expression of vimentin and S100A4, along with significant reduction in Rbm fragmentation, EGFR and MMP-9 expression in COPD patients. This trial indicated strong suggestive support for ICs’ an anti-EMT effect in airways of COPD patients, which may also clarify the links between ICs use and the protection effect against lung cancer in COPD patients.

It is worth mentioning that a dose-response relationship between ICs exposure and lung cancer risk was observed by two studies (10,11), which showed that higher ICs doses were associated with a lower risk of lung cancer. We also noted that it was not a random decision to use ICs or not. ICs would be recommended to those COPD patients who had experienced lots of episodes of acute exacerbation or had forced expiratory volume in 1 second (FEV1) <50% (42). According to recommendations, patients with more severe inflammation or lower FEV1 should consider using ICs. However, lung cancer has been known to be inflammation-associated (43) and related to reduced FEV1 (44). Therefore, although ICs might be in the prescription of patients with high lung cancer risk, lower lung cancer risk was observed in ICs users than non-users in our study, suggesting that ICs had multiple effects in preventing lung cancer. Recently, corticosteroids such as budesonide and dexamethasone have been shown to have an inhibitory effect of the proliferation of A549 cells, which is a glucocorticoid-receptor (GR)-rich adenocarcinoma-derived human alveolar epithelial cell line (45). Corticosteroids were thought to inhibit the retinoblastoma (Rb) phosphorylation to prevent progression from G1 phase to S phase (45). Another in vitro study, Liang (46). showed that the anti-proliferative effect of corticosteroids required functional p53, which plays an essential role in liganded GR repression the NF-κB pathway (47). The NF-κB pathway is constitutively active in most malignancies (48). These studies mainly showed that ICs have an inhibitory effect on GR-rich non-small cell lung cancer (NSCLC) cell lines, which may explain the decreased risk of lung cancer in COPD patients receiving ICs. Furthermore, in mouse models, corticosteroids have been shown to modulate proto-oncogene expression and produce 70% inhibition of lung tumor multiplicity (49).

Three strengths of this study should be highlighted. First, to the best of our knowledge, this is the first meta-analysis to analyze whether the use of ICs in patients with COPD reduces the risk of lung cancer. Second, the included study sample was large and the follow-up time was long enough, hence reducing the likelihood of selection biases. Third, a stratified analysis was performed based on patients' age and region to explore if there were age-based and region-based differences.

We acknowledged some limitations in regards to our meta-analysis. First, because of the different methods used to describe the dose-response of ICs in the included studies, we were unable to combine them to determine if there was a dose-response relationship. Second, the included studies did not contain detailed information regarding smoking status (50), drug use (51), sex (52) and occupational exposures (53), all of which might be risk factors for lung cancer and could not be analyzed in this study. Third, due to data limitations, we were unable to collect and analyze the data of different subtypes of lung cancer to explore the influence of tumor properties on the lung cancer risk of COPD patients. Fourth, due to the inclusion of research publications, publication bias was inevitable.

In conclusion, this meta-analysis demonstrates that ICs have a protective effect against lung cancer in COPD patients. Such an association can provide guidance for clinicians in the prevention of lung cancer among patients with COPD.

Funding: This study was supported by the National Natural Science Foundation of China (Grant No.81871893) and Key Project of Guangzhou Scientific Research Project (Grant No.201804020030) provide and maintain database.

Reporting Checklist: The authors have completed the PRISMA reporting checklist. Available at: http://dx.doi.org/10.21037/tlcr-20-1126

Conflicts of Interest: All authors have completed the ICMJE uniform disclosure form (available at: http://dx.doi.org/10.21037/tlcr-20-1126). The authors have no conflicts of interest to declare.