Pulmonary fibrosis combined with lung cancer following lung transplantation: should we do more?

We present the following article in accordance with the CARE reporting checklist (available at http://dx.doi.org/10.21037/tlcr-21-46).

All procedures performed in studies involving human participants were in accordance with the ethical standards of the institutional and/or national research committee(s) and with the Helsinki Declaration (as revised in 2013). Written informed consent was obtained from the patient.

The transplant recipient in this study was a 42-year-old man diagnosed with idiopathic pulmonary fibrosis (IPF). He had a history of smoking (approximately 20 cigarettes per day for more than 20 years) and quit smoking shortly before his transplant surgery. The patient had no family history of lung cancer. A computed tomography (CT) scan revealed interstitial pneumonia in both lungs (Figure 1), and small lymph nodes less than 1cm in the mediastinum and bilateral hilar. Pulmonary ventilation-perfusion imaging showed 40% in the left lung and 60% in the right lung (Figure 2). Before surgery the patient was not suspected of pulmonary hypertension although no right cardiac catheterization has been performed. The carcinoembryonic antigen (CEA) was 18.07 ng/mL (i.e., <5 ng/mL) prior to surgery. Smoking history and the IPF could both explain slightly raised CEA values. 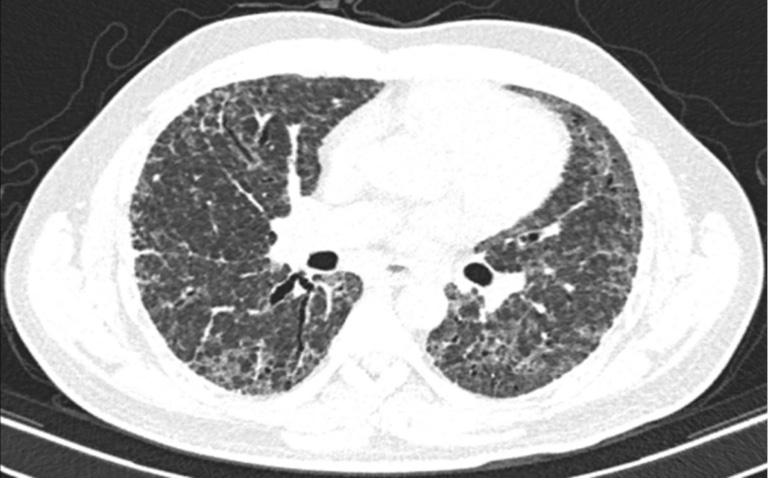 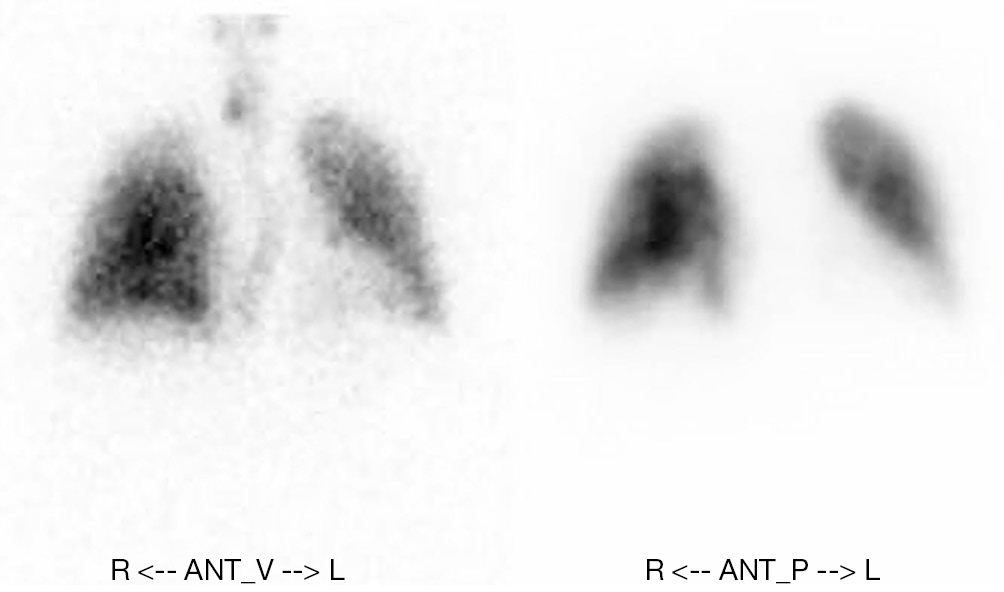 Lung donor 1 was a 45-year-old man who suffered from spontaneous intracerebral hemorrhage. Tracheal intubation has been established for 1 day. He was a non-smoker with no family history of lung cancer. The oxygenation index before procurement was 404.

Left lung transplantation was performed in December 2018 without extracorporeal membrane oxygenation (ECMO) support and tracheal extubation in the operating room. Immunosuppressive therapy was initiated with mycophenolate mofetil (CellCept), tacrolimus (Prograf), and methylprednisolone. The patient was transferred to the general ward on Day 10 and discharged on Day 18.

No acute rejection occurred, however pulmonary effusion of the right lung (native lung) increased consistently (Figure 3), and some ground glass changes could be seen in the left lower lobe (of the implanted lung). The size of the lymph nodes remained unchanged. Ultrasound guided bronchoscopic punction showed mucinous adenocarcinoma of the right lung and positron emission tomography CT (PET-CT) scan found 18F-fluoro-2-deoxy-D-glucose (18FDG) uptake of the whole right lung. The maximum standardized uptake value (SUVmax) was 8.5 (Figure 4), and 4.4 in the left lower lobe (Figure 5). We found no uptake in the hilar and mediastinum lymph node, and no distant metastasis. The CEA on the 22nd August 2019 was 30.02 ng/mL. 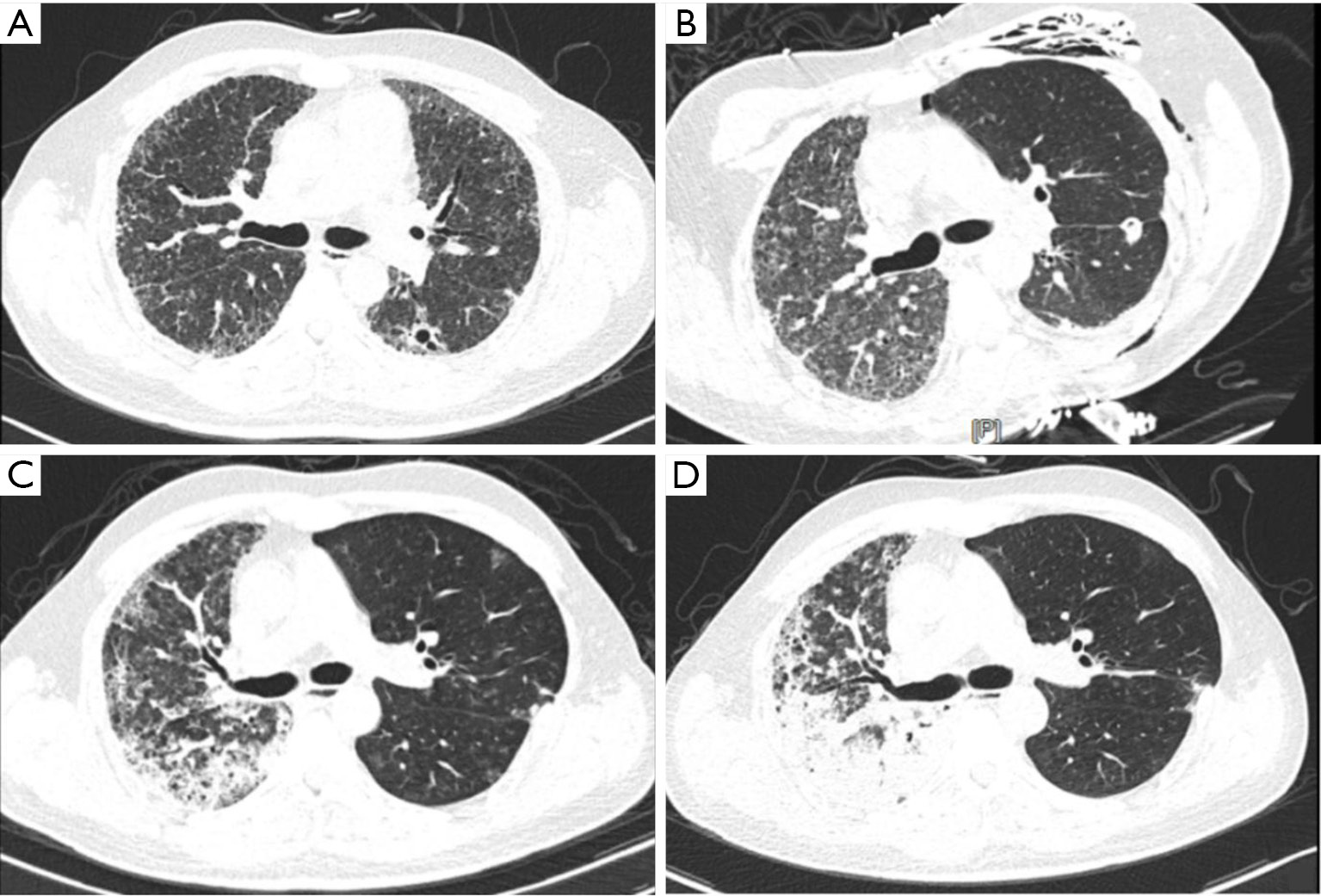 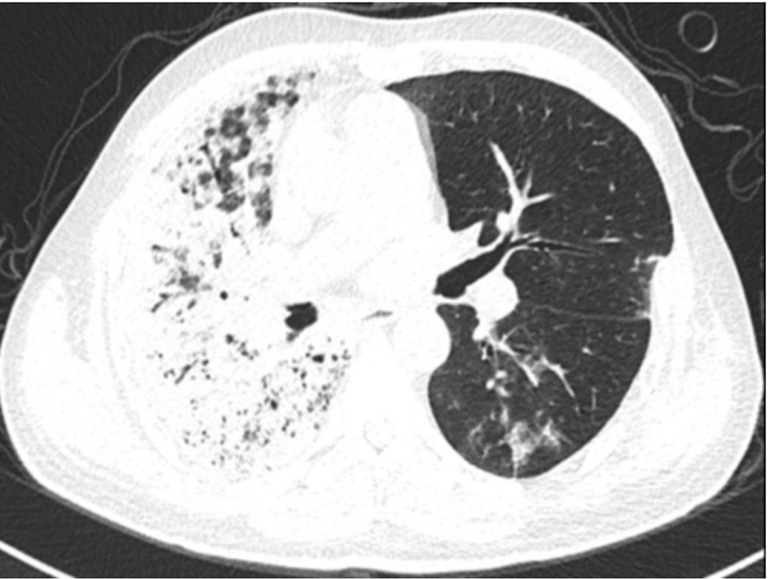 Lung donor 2 was a 34-year-old man who experienced brain trauma. Tracheal intubation was necessary for 6 days. There was no pathogenic bacteria identified in the sputum culture. He was a smoker (approximately 10 cigarettes per day for more than 10 years) but had no family history of lung cancer. The oxygenation index before procurement was 522 mmHg.

Right lung transplantation was performed in August 2019 (the left lung was discarded due to severe pulmonary edema). Adenocarcinoma was confirmed following wedge resection. Lobectomy (LLL) and lymph node sampling (Station 11 and 7) were subsequently performed and no lymph node metastasis was confirmed in the frozen section. Immunosuppressive therapy was initiated with mycophenolate mofetil (CellCept), tacrolimus (Prograf)/cyclosporin A, methylprednisolone. The patient was transferred to the general ward on Day 8 and discharged on Day 34.

Gene detection was performed for this patient on the 16th September 2019 and Kirsten Rat Sarcoma Viral Oncogene Homolog (K-RAS) G12A 14.34% was identified. The CEA on 20th March 2020 was 2.34 ng/mL (Figure 6). Thus far, no postoperative recurrence has been found for 1 year.

Although the first case of lung transplantation was performed in 1963 in an advanced bronchial carcinoma patient with respiratory failure [i.e., chronic obstructive pulmonary disease (COPD)] (3), lung transplantation is a poor treatment option for lung cancer patients. It was previously employed as a management strategy for bronchioloalveolar carcinoma (BAC), which presented as a localized lesion (4). However, the survival of these patients is poor, owing primarily to the use of immunosuppressants. In recent years, IPF has been the major basis for lung transplantation, with lung cancer occasionally occurring postoperatively. A large data analysis study of postoperative lung cancer from Toronto General Hospital and the United Network for Organ Sharing (UNOS) Registry System found that the postoperative morbidity of lung cancer was 0.5% and 0.13% (5,6). Lung cancer may originate in either the implanted lung or the native lung. Risk factors for the development of postoperative lung cancer include: IPF, a history of smoking, older age (either the donor or the recipient), male gender, prolonged immunosuppression, and single lung transplantation (7). Of these factors, IPF represents the highest risk for lung cancer, with a 4.96 rate ratio for developing lung cancer in IPF patients compared to the general population (8).

Some lung cancer patients cannot be identified preoperatively due to the following factors: 1. Loss of donor information: insufficient smoking history, incomplete family lung cancer history, and no CT scan of the donor, which may increase the risk of missed diagnosis of small nodules in the lung; 2. with the smoking and family history of lung cancer of the recipient, lung cancer could be identified after the use of immunosuppressants; 3. tumors from the bronchial mucosa could not be found previously, and may postoperatively spread to the main bronchus of the implanted lung.

In our centre, CT scans, as well as serological indicators of CEA, SCC, and NSE are routinely tested. Frozen sectioning is recommended for suspicious nodules in the lung during procurement. In this patient, it seems that the lesion of the right lower lobe (Figure 7) was suspicious before the first lung transplantation but without enough attention. In fact, diagnosis is often difficult in IPF patients due to the diffuse lung abnormalities, and small nodules may even be considered as fibrotic lesions (9). These suspicious lesions progressed rapidly due to the use of immunosuppressants (Figure 3). Therefore, surveillance of lung cancer in high-risk patients (both the recipient and the donor) is critically important. 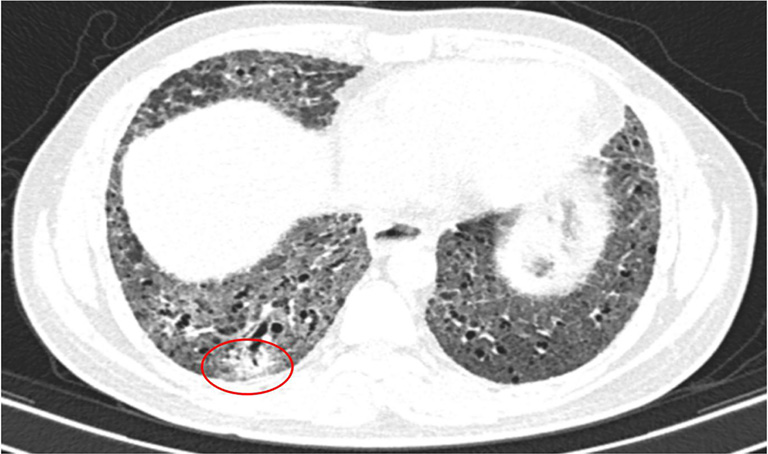 Figure 7 The suspicious lesion of the right lower lobe.

The use of immunosuppressants may lead to earlier tumorigenesis; however, a lower dose of immunosuppressants would increase the risk of rejection and immune surveillance failure (10). If nodules are detected at regular follow-ups and are highly suspected to be lung cancer, active approaches to obtain the pathology are recommended. Lobectomy and lymphadenectomy are required for Tumor Node Metastasis (TNM) staging and prognostic prediction if the patient in a good condition. de Perrot et al. (11) reported that the 5-year survival was better in 22 patients with stage I disease compared to 14 patients with stage II–III (51% versus 14%, respectively).

The question remains: what should be done for patients diagnosed with lung cancer post-lung transplantation? Chemotherapy and radiotherapy are not suitable for these patients, due to their immunosuppressed state (12). Immunotherapy is a highly effective treatment with a good response in advanced stage lung cancer in cases with high programmed cell death 1 (PD-1) or programmed death-ligand 1 (PD-L1) expression. However, the use of immunotherapy still lacks advanced clinical data, particularly large sample analyses. Over the past 20 years, targeted therapy has emerged as an effective measure for the treatment of advanced lung cancer patients with epidermal growth factor receptor (EGFR), anaplastic lymphoma kinase (ALK), or ROS proto-oncogene 1 (ROS-1) mutations. Without the significant immunosuppression compared to chemotherapy and radiotherapy, targeted therapy presents a potential option for these patients, although the clinical data is still lacking.

In this study, due to severe pulmonary edema, the patient underwent right lung transplantation and lobectomy (left lower lobe). Unfortunately, this presented a significant risk compared to double lung transplantation. Postoperative K-RAS mutation was found by gene detection. Since there are no targeted drug therapies available, no specific treatment was provided, and patient only received regular follow-ups.

Enhanced postoperative surveillance may help to discover tumors earlier. PET-CT is a useful examination to confirm the metastasis and uptake of the tumor (13), but not for regular screening. Tumor biomarkers (such as CEA, SCC, and NSE) are also useful for preliminary screening, however given their low sensitivity and specificity, these results may confuse clinicians, especially in IPF patients with lung cancer. Therefore, more sensitive surveillance methods are needed, such as tumor methylation and circulating tumor cell (CTC) analysis (14).

In general, lung transplantation is a poor treatment option for lung cancer patients, as the use of immunosuppressants results in worse long-term survival outcomes. End-stage lung disease patients need to be aware of the risk for post-transplant tumorigenesis, especially in those with high-risk factors (such as a history of smoking in the donor and/or recipient, a family history of lung cancer, tumor history within the previous 5 years, and IPF). When lung cancer occurs in these patients, irrespective of whether it occurs in the native lung or the implanted lung, pathology and TNM staging are necessary to determine the survival prognosis. Tumor methylation and CTC analysis may be more sensitive methods for earlier detection of lung cancer.

Reporting Checklist: The authors have completed the CARE reporting checklist. Available at http://dx.doi.org/10.21037/tlcr-21-46

Conflicts of Interest: All authors have completed the ICMJE uniform disclosure form (available at http://dx.doi.org/10.21037/tlcr-21-46). The authors have no conflicts of interest to declare.