As a quickly evolving, next-generation minimally invasive technique, RATS has increasingly grown in popularity in recent years. The robotic platform has some technical advantages over VATS, including a three-dimensional operative view, intuitive use of the robotic hands, and increased instrument flexibility; therefore, it has the potential to surpass VATS in the handling of more complex cases and may facilitate lymph node dissection (3-6). Currently, RATS requires 3 or 4 ports and 1 or 2 assistive incisions. The uniportal VATS technique, which was first reported in 2004 by Rocco et al. for a wedge resection (7-10), is also appealing to surgeons due to involving potentially less postoperative pain and higher patient satisfaction with respect to the number of incisions (9). Despite respective innovations in these 2 directions, to our knowledge, the completion of RATS using a single incision has never been reported in the literature. With previous experience in both RATS and uniportal VATS (11-15), we report a representative video case of right upper lobectomy in the treatment of a subsolid lung nodule (with final pathology of stage I adenocarcinoma) by uniportal RATS using the da Vinci Surgical System (Xi) shown as Video 1 as attached. We present the following article in accordance with the CARE reporting checklist (available at http://dx.doi.org/10.21037/tlcr-21-207).

The presenting case was a 47-year-old man with no smoking history. The patient had suffered tuberculosis 35 years previously. Contrast-enhanced chest CT revealed a mixed-density ground-glass nodule in the right upper lobe (Figure 1). The nodule was followed for 3 months and no changes were observed; thus, a right upper lobectomy was scheduled (Figure 1). Preoperative lung function was normal [the forced expiratory volume in 1 second (FEV1) and diffusing capacity for carbon monoxide (DLCO) were 95.1% and 99.8%, respectively]. The patient had no comorbidities, and his preoperative performance score was 0. 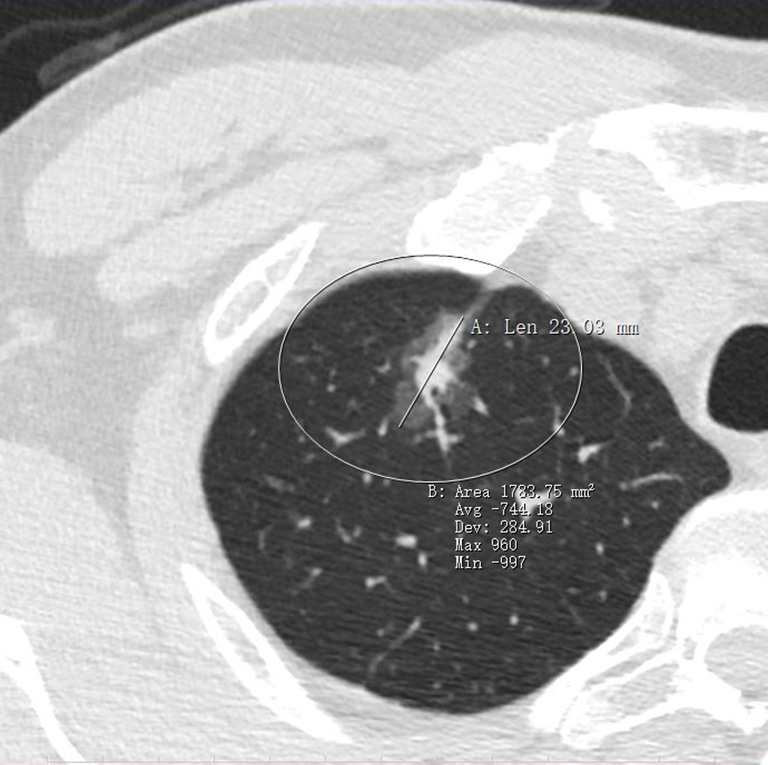 All procedures performed in studies involving human participants were in accordance with the ethical standards of the institutional and/or national research committee(s) and with the Helsinki Declaration (as revised in 2013). Written informed consent was obtained from the patient.

Figure 2 Layout of port in uniportal robotic-assisted thoracoscopic surgery (RATS) with Da Vinci Robotic Surgery System Xi for right upper lobectomy. (A) Uniport position was placed in the 4th intercostal space at the midaxillary line in the surgery of presenting case; (B) the layout of arms in uniport.

After intubation, the patient was placed in the lateral decubitus position. The robot was moved to the cranial side and slightly turned to the back so that the patient cart could be placed parallel to the patient’s rib space. A single, 4-cm-long incision was then made at the midaxillary line at the 4th intercostal space. A 30° camera arm was placed at the upper end of the incision, and subsequently, 2 other instrument arms were placed as shown in Figure 2. There were 3 points of note: (I) arms 1 and 2 were intercrossed inside the chest, and the control of the arms needed to be reset on the operator’s console accordingly; (II) the trocars could be installed on the arms before being moved to the incision for positioning; (III) the positioning mark on each trocar needed to be roughly at the level of the patient’s skin to avoid instrument collision and compression to the tissue.

After all trocars had been positioned, approximately 1.5 cm was left at the lower end of the incision for the assistant’s access. In total, docking took about 3 minutes. For this operation, the right hand (arm 1) was an electrocautery hook and the left hand (arm 2) was a robotic forceps. To ensure the smoothness of the operation, we chose not to change the distribution of the arms during the procedure. The lung retractor, staplers, clips, and suction were introduced via the uniport by a bedside assistant with previous experience in uniportal VATS.

In this case of right upper lobectomy, first, the upper lobe was retracted posteriorly. The dissection was initiated at the anterior hilum to expose the vein and the superior truncus branch. After isolation, the truncus branch was divided using a stapler. The right upper bronchus was then exposed, and lymph nodes of the lower trachea (station 4), hilum (station 10), and the interlobar region (station 11) were removed.

After further dissection of the remaining interlobar lymph nodes, the pulmonary vein of the right upper lobe was isolated and divided with a stapler. The lobectomy was completed by dividing the horizontal fissure and collecting the upper lobe in a specimen bag. Due to the relatively low malignancy of the subsolid nodule, sampling of mediastinal lymph nodes of stations 2R, 4R, 7, and 8 was systematically carried out. The suture of the surgical incision is shown in Figure 3. The total operation time for the lobectomy and lymph node sampling was approximately 90 minutes. 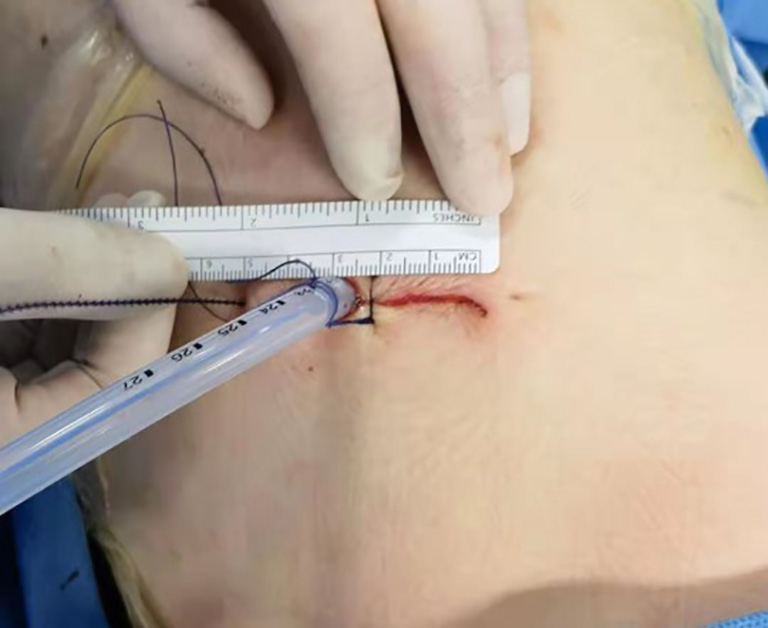 Figure 3 Measurement of the uniport after suture for length about 4 cm. 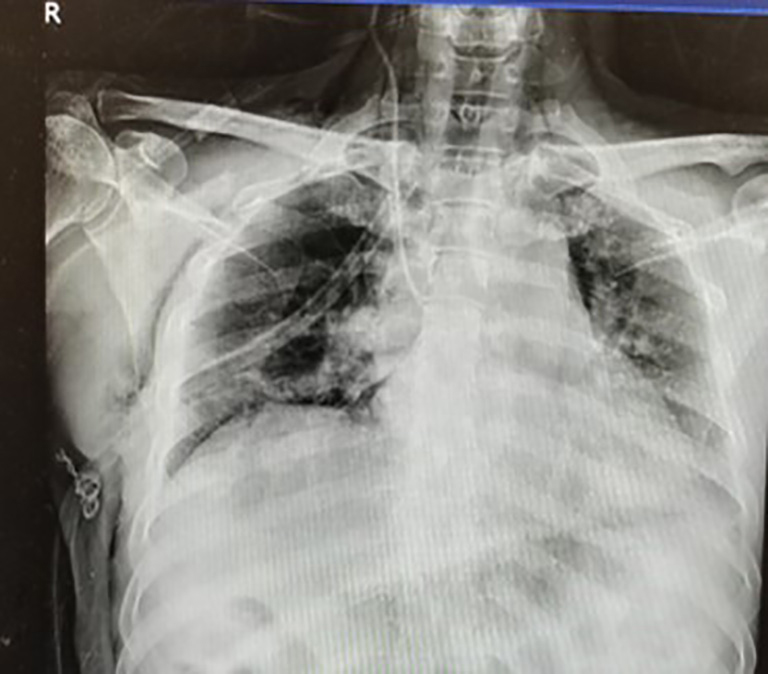 With better vision, higher maneuverability, and more static movement than VATS, the ability of RATS to perform fine manipulation tasks and lymph node dissection has been greatly improved (16). It has been shown that robotic techniques may be associated with a higher nodal upstaging rate than VATS in patients with clinical stage I non-small cell lung cancer (17,18).

Herein, we have presented a case of uniportal RATS performed using the 4th generation da Vinci Xi Surgical System for right upper lobectomy. The latest robot has 4 interchangeable arms, each including an 8 mm trocar in which the camera can fit. The size of the trocars is also smaller, thus enabling them to be placed into 1 incision with minimal collision during the surgery. The uniportal technique has been reported to potentially reduce postoperative pain and enhance recovery (19); however, despite its rapid growth in popularity among surgeons who perform VATS, to our knowledge, it has not been adopted in RATS before. Through our efforts to perform RATS with a reduced number of incisions, we hope to combine the advantages of these 2 techniques. With continuous endeavor, we believe this novel technique can bring benefits for our patients and propagate the development of RATS.

We thank anesthetist Xiaying Xu and nurses Dan Jin, Jiming Yan, and Lingji Shen for their cooperation and contributions in the operation presented.

Reporting Checklist: The authors have completed the CARE reporting checklist. Available at http://dx.doi.org/10.21037/tlcr-21-207

Conflicts of Interest: All authors have completed the ICMJE uniform disclosure form (available at http://dx.doi.org/10.21037/tlcr-21-207). The authors have no conflicts of interest to declare.