The TNM classification is stratified based on tumor size and lymph node involvement in resected NSCLC patients. However, there are various other independent prognostic factors, such as sex, age, tumor histology, tumor differentiation, and number of dissected lymph nodes, that may contribute considerably to individualized predictions of survival (4,6). A nomogram allows for such individualized survival prediction (6,7). Established nomograms for NSCLC have provided a more accurate prediction than traditional TNM staging systems (6,8,9). However, there are few models for predicting the survival of patients with resected NSCLC receiving chemotherapy. In this study, our aim was to develop a clinical nomogram for predicting overall survival (OS) in patients with resected NSCLC undergoing chemotherapy based on the data from the Surveillance, Epidemiology, and End Results (SEER) database. Furthermore, we used external validation cohorts from China and the National Cancer Database (NCDB) to validate the nomogram. We present the following article in accordance with the TRIPOD reporting checklist (available at http://dx.doi.org/10.21037/tlcr-20-1220).

Details of patients with resected NSCLC undergoing chemotherapy between 2004 and 2015 were extracted from the SEER-18 database using SEER*Stat software (v8.3.5). The inclusion criteria were as follows: pathologically confirmed primary NSCLC between January 2004 and December 2015; history of lobectomy, pneumonectomy, segmentectomy, or wedge resection as curative treatment for lung cancer; treatment with chemotherapy; and the presence of one malignant primary lesion. The exclusion criteria were as follows: distant metastasis; invasion of the diaphragm, mediastinum, heart, great vessels, trachea, recurrent laryngeal nerve, esophagus, vertebral body, or carina; N3 disease; those who died within 30 days of surgery; and incomplete information. A standardized data form was created to obtain all relevant data, including age, sex, tumor size, T stage, tumor location, examined lymph node, N stage, differentiation, histological type, extent of surgery, radiation and VPI (visceral pleural invasion). The TNM staging system was characterized according to the sixth edition of the American Joint Committee on Cancer (AJCC). Histology and tumor location codes were listed in Table S1.

To assess the generalizability of the model, two external validation cohorts that met the inclusion and exclusion criteria were used to examine the applicability of the model. One cohort was composed of 1,108 patients from the First Affiliated Hospital of Guangzhou Medical University, China between 2009 and 2014. The other cohort comprised 43,767 patients from the NCDB between 2000 and 2015. The NCDB is a joint project of the Commission on Cancer (CoC) of the American College of Surgeons and the American Cancer Society. The CoC’s NCDB and the hospitals participating in the CoC NCDB are the sources of the de-identified data used herein; they have not verified and are not responsible for the statistical validity of the data analysis or the conclusions derived by the authors. The data is considered as hospital-based rather than population-based. All the data and analysis using NCDB were conducted by Nicholas Mayne and Chi-Fu Jeffrey Yang in Duke University Medical Center. All procedures performed in this study were in accordance with the Declaration of Helsinki (as revised in 2013).

Construction of the nomogram

The training dataset (n=16,661) from SEER was used for the original nomogram development. OS was calculated using the Kaplan-Meier method and compared using the log-rank test. Multivariable Cox proportional hazard regression was used to identify independent prognostic factors. Based on the significant independent factors, nomograms were developed using R 3.5.3 (http://www.r-project.org) with the survival and rms packages (10).

Validation and calibration of the nomogram

The model was subjected to bootstrap internal validation in the training cohort and external validation with the cohorts from the First Affiliated Hospital of Guangzhou Medical University and the NCDB. The discrimination ability was identified by applying the concordance index (C-index) (11). Calibration for the 1-, 3-, and 5-year OS, which compared the predicted survival with the observed survival, was performed with a calibration curve.

The chi-square test was used to evaluate the statistical significance of differences in the proportions of variables for the three cohorts. Overall survival (OS) was defined as the time from medical diagnosis to death from any cause. OS were estimated using the Kaplan-Meier method and compared using the log-rank test. Multivariate Cox proportional hazard regression was used to determine independent prognostic factors. The hazard ratio (HR) and corresponding 95% confidence interval (CI) were calculated. Statistical analyses were performed using SPSS 22.0. The C-indexes of two different models were compared as previously described (12). Statistical analyses were performed utilizing MedCalc 18.2.1. P<0.05 was considered statistically significant.

A total of 16,661 patients with resected NSCLC treated with chemotherapy from the SEER database met the inclusion criteria. The median (interquartile range) follow-up was 27 months (13–52 months). For the external validation cohorts, there were 1,108 patients from hospitals in China and 43,767 patients from the NCDB. The median follow-up times in these cohorts were 41 months (28–59 months) and 36 months (22–49 months), respectively. Table 1 summarizes the demographics and clinicopathological characteristics in the three cohorts. 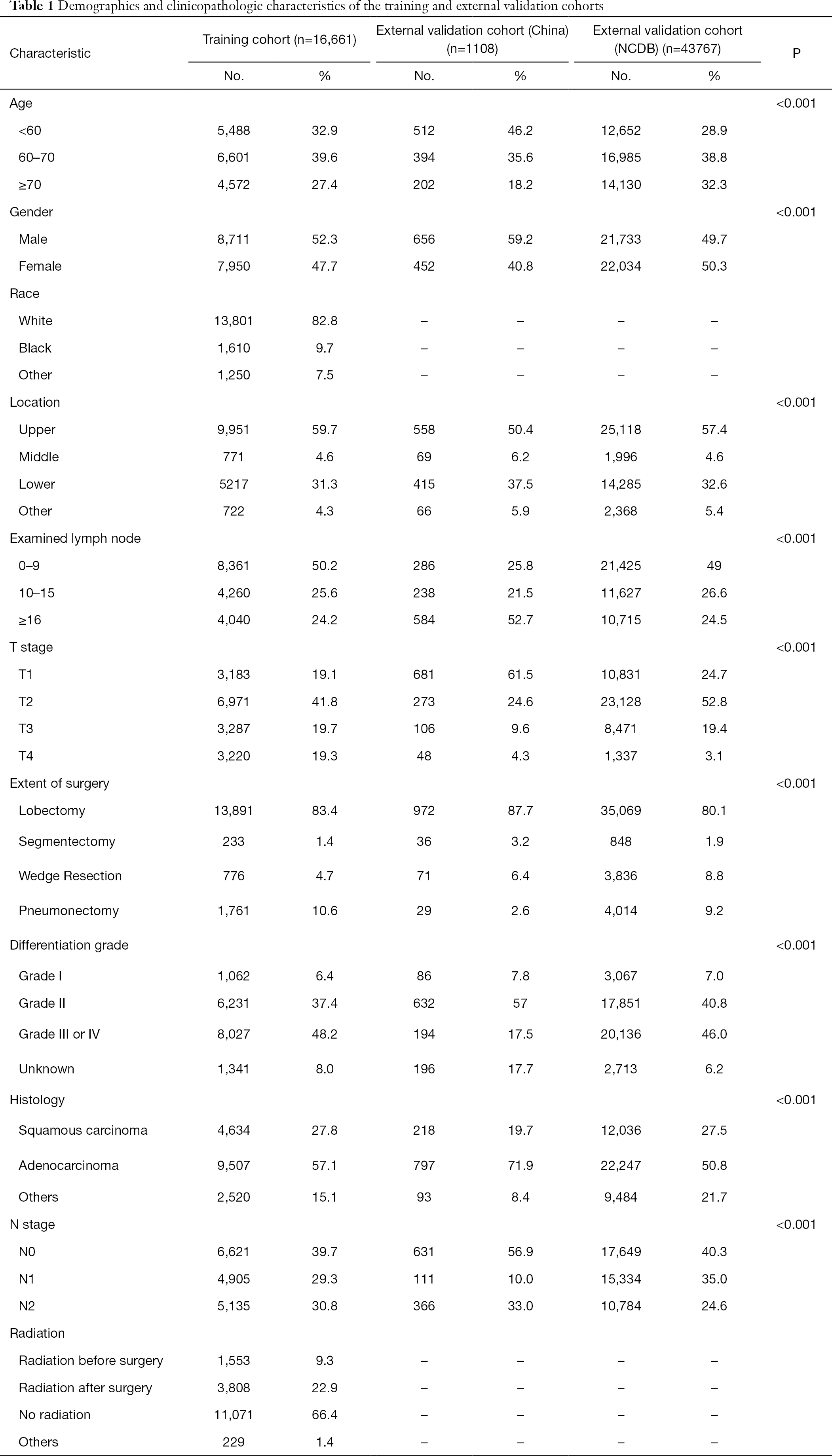 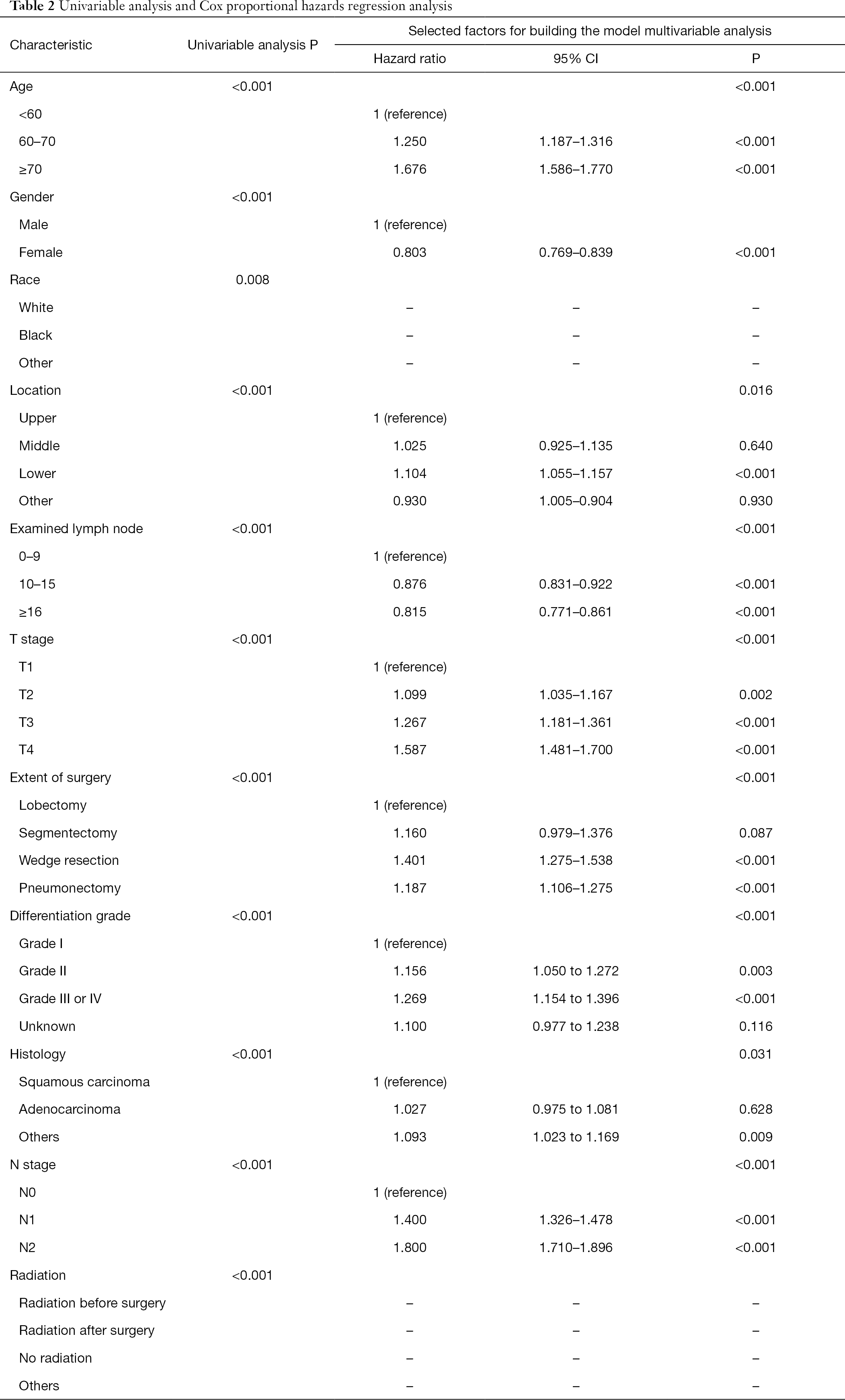 Development of a prognostic nomogram

Significant independent factors, including age, sex, primary site, number of dissected lymph nodes, extent of surgery, differentiation, histology, T stage, and N stage, were integrated to create the nomogram (Figure 1). The nomogram demonstrated N stage, T stage, and age as having the greatest contribution to prognosis, followed by extent of surgery, gender, and differentiation. The number of dissected lymph nodes, primary site, and histology showed a relatively small impact on survival. By calculating the total score and comparing it to the highest possible score, it was possible to obtain the predicted 1-, 3-, and 5-year OS. 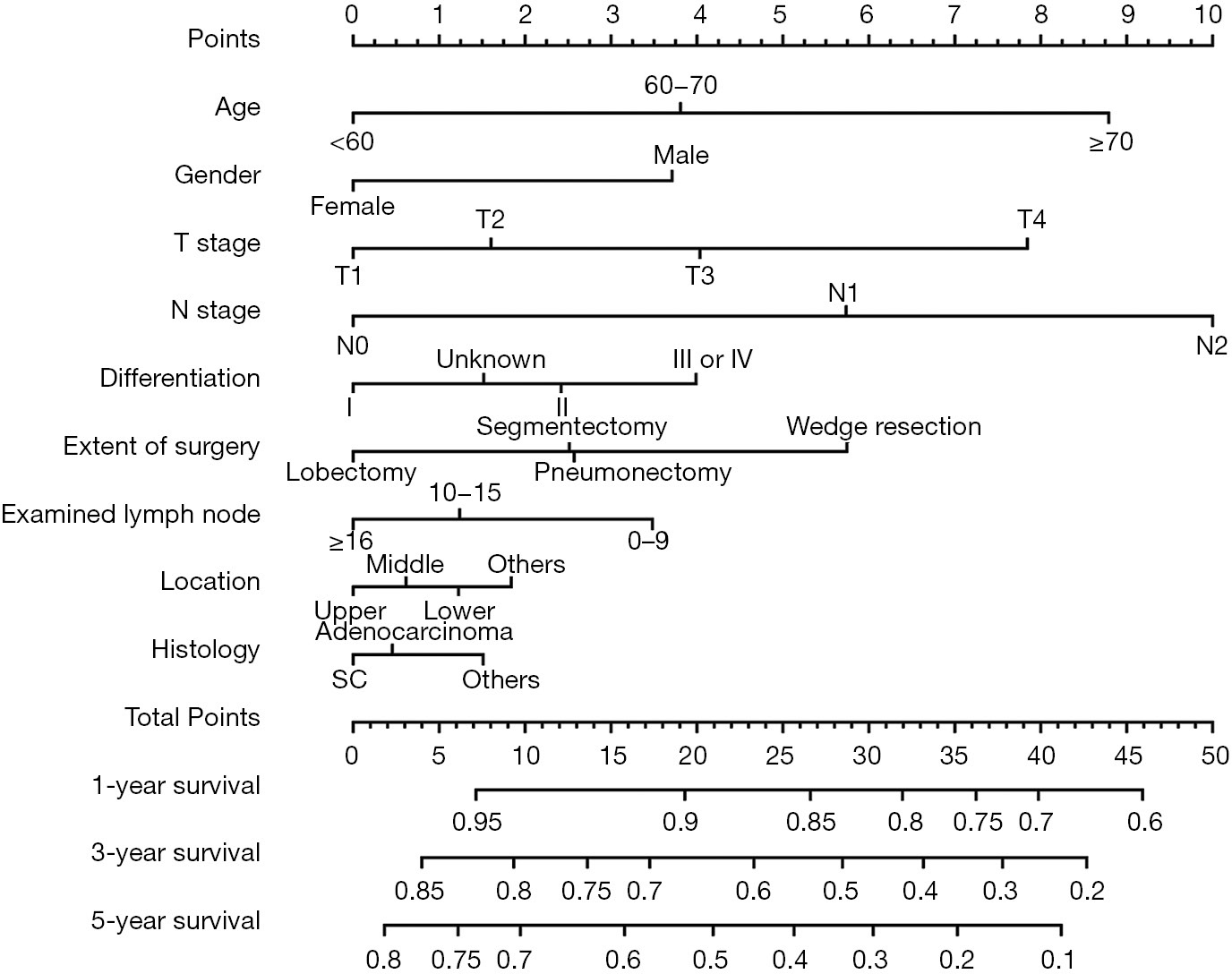 Calibration and validation of the nomogram

As only the T and N factors determine the TNM classification for resected NSCLC patients, nomograms with more prognostic factors may be more accurate in predicting survival than the TNM classification. Although there are several prognostic models for lung cancer, a nomogram has not been established for patients with resected NSCLC undergoing chemotherapy. Therefore, the aim of this study was to establish a practical survival prediction model for individualized predictions about the survival of these patients. The model was more predictive than the TNM staging system, with superior C-indices.

In this large population study, we discovered that age, sex, primary site, number of dissected lymph nodes, extent of surgery, differentiation, histology, T stage, and N stage were independent factors for OS. Most of these factors were consistent with other findings on risk factors for NSCLC (4,6,13). However, no previous study has identified many prognostic factors for patients with resected NSCLC who are receiving chemotherapy (14,15). Despite histology and primary site showing little impact on survival, we tried to incorporate as many clinical prognostic factors into the model as possible to increase its accuracy. Notably, tumors in the upper lobe led to a better prognosis, and tumors in the trachea and translobes are associated with the worst survival. We also found that the extent of surgery and the number of dissected lymph nodes had a considerable impact on survival. This suggests that lobectomy is still the best surgical method to improve prognosis. Additionally, the number of examined lymph nodes is a vital prognostic factor in various kinds of cancer (16-18). Similar studies (4,6) in NSCLC also suggested that a larger number of examined lymph nodes is associated with a better prognosis. Radiation was not included in nomogram as prognostic factor because it is not recommended as standard for resected NSCLC according to the NCCN guidelines. Secondly, we can no obtain radiotherapy data in the external validation cohorts. Therefore, we identified age, gender, T stage, N stage, extent of surgery, differentiation grade, histology, location and examined lymph nodes as variables used in the nomogram.

In our study, the calibration plots showed excellent agreement between the predicted survival and the actual survival in all cohorts, which confirmed the repeatability and stability of the nomogram. Furthermore, the model also fit the China and NCDB cohorts, which supports the worldwide use of this model, regardless of race or geography. Discrimination was exposed by the considerably superior C-index of the nomogram when compared with the TNM stage in the training cohort and the NCDB external validation cohort. We consider the small sample size to be the key factor to the insignificant difference in C-index in the Chinese cohort (P=0.06). Moreover, we can also more accurately distinguish and predict the survival of each TNM stage according to the nomogram.

Our study provides one of the first nomograms that can predict OS in patients with resected NSCLC undergoing chemotherapy using a large population-based database. Both doctors and patients will be able to understand individualized survival expectations using the scoring system. This prognostic model provides an instrument for research study and clinical decision, including patient stratification and therapeutic suggestions. In addition, with the development of comprehensive treatment of lung cancer, more treatment methods are needed to improve survival in patients with a low survival rate. A recent study reported (23) that gefitinib plus pemetrexed and carboplatin chemotherapy significantly prolonged survival in EGFR-mutant NSCLC. Gandhi et al. (24) found that the addition of pembrolizumab to standard chemotherapy resulted in significantly longer survival than chemotherapy alone in NSCLC patients without EGFR or ALK mutations. Therefore, targeted therapy or immunotherapy may be an option for patients with low survival rates according to the nomogram.

There are still some limitations associated with this study. First, the nomogram was developed using retrospective data from the SEER database, which may introduce the possibility of selection bias. Second, the SEER program lacks data on other prognostic factors, such as specific chemotherapy regimens, tumor recurrence, proportion of pathological subtypes, surgical margin status, comorbidity, and molecular factors. In particular, some important molecular factors, including EGFR, ALK, ROS1, c-met, PD-1, and PDL-1, are very important for patient prognosis and treatment. In addition, the SEER data do not distinguish between adjuvant and neoadjuvant chemotherapy. Despite it have some limitations, the nomogram was created applying a large population and was validated using data in two different regions, providing a practical clinical tool to predict survival in patients with resected NSCLC undergoing chemotherapy.

We developed a prognostic model that can provide individual prediction of OS for patients with resected NSCLC undergoing chemotherapy. Using this model, we can make more precise individualized predictions of the survival of patients after surgery and chemotherapy. This practical nomogram may also support physicians in treatment planning and guide future studies.

Reporting Checklist: The authors have completed the TRIPOD reporting checklist. Available at http://dx.doi.org/10.21037/tlcr-20-1220

Conflicts of Interest: All authors have completed the ICMJE uniform disclosure form (available at http://dx.doi.org/10.21037/tlcr-20-1220). WL serves as an unpaid associate editor-in-chief from Apr 2018 to Apr 2021. The other authors have no conflicts of interest to declare.

Ethical Statement: The authors are accountable for all aspects of the work in ensuring that questions related to the accuracy or integrity of any part of the work are appropriately investigated and resolved. All procedures performed in this study were in accordance with the Declaration of Helsinki (as revised in 2013).