Lung cancer, especially non-small cell lung cancer (NSCLC), is still the leading cause of cancer-related death in the world. Anatomically, lung cancer is divided into central and peripheral types. Some central lung cancer patients whose pulmonary function is insufficient to undergo pneumonectomy, will lose their opportunities for radical surgical treatment. The options for these patients are limited including chemotherapy, targeted therapy, immunotherapy with or without radiation. Some patients may have a second chance to receive surgical treatment after neo-adjuvant therapy (1), but the rest of them would lose their opportunities to receive radical surgery because of tumor progression or severe complications from chemotherapeutic medications.

Pneumonectomy for central lung cancer is associated with a high postoperative morbidity and mortality, especially with right-sided lesions. Although sleeve and double sleeve lobectomy offer satisfactory methods to treat central lung cancer and avoid pneumonectomy (2), those extensively involving the main bronchus or main pulmonary artery are very difficult to be resected using such techniques. In some cases, the surgical margin might have to be compromised in order to achieve tension-free anastomoses of pulmonary vessels and bronchus. Considering this, lung autotransplantation technique would be a suitable method to preserve lung tissue and completely remove the tumor (3-5). For the sake of simplifying the surgical process and widening the indication, we hereby report a novel lung autotransplantation technique. We present the following article in accordance with the CARE reporting checklist (available at http://dx.doi.org/10.21037/tlcr-20-1242). 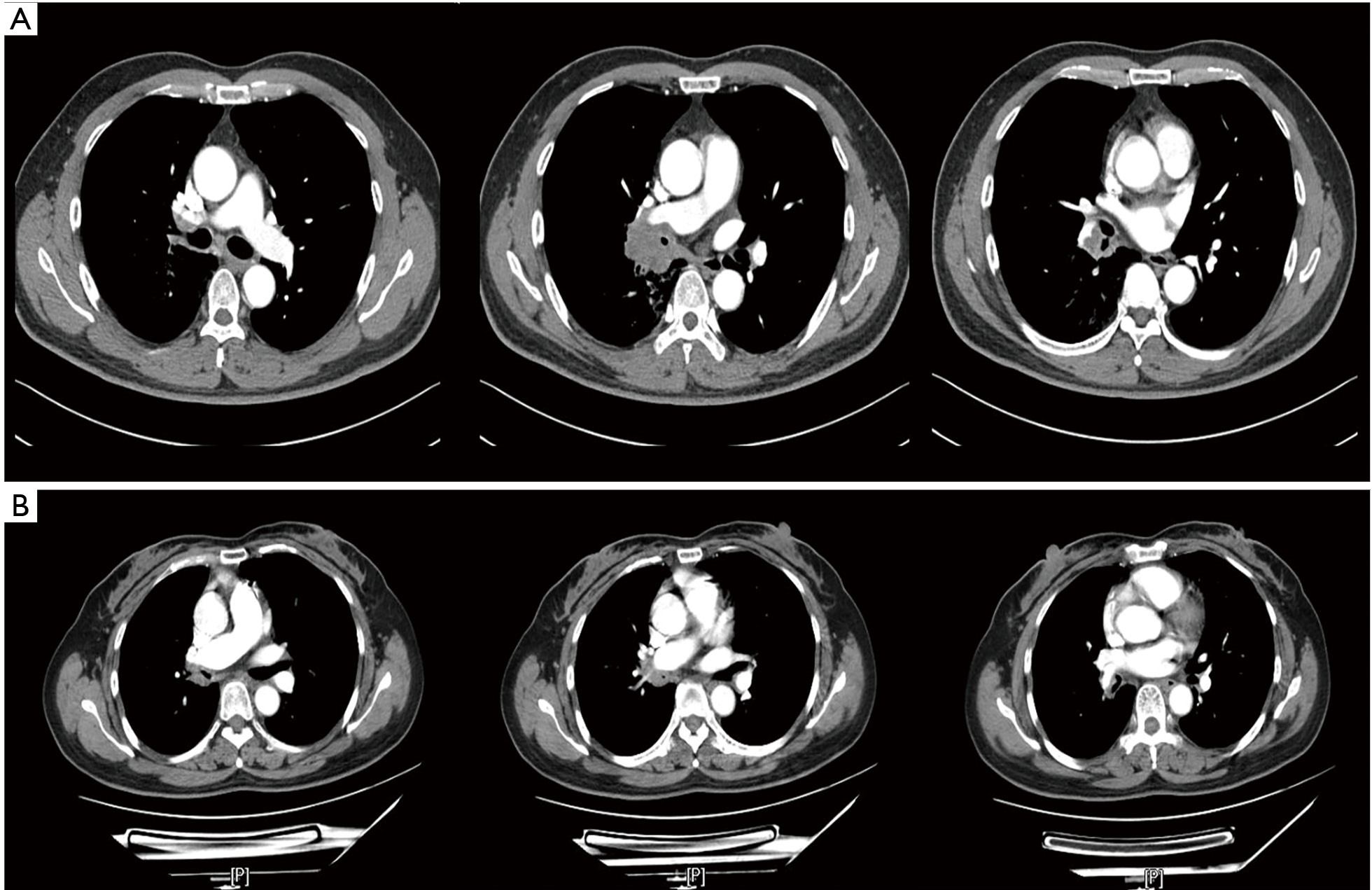 After general anesthesia, the patient was placed on left lateral decubitus position. A 1 cm incision was made in the 7th intercostal space on the right anterior axillary line for the placement of thoracoscope. A 10 cm anterolateral incision in the 5th intercostal space for operation and a 1cm accessory incision in 7th intercostal space on right posterior axillary line were made. Right upper and middle lobectomy with S6 segmentectomy was firstly performed in Case 1. Right upper and middle lobectomy was performed in Case 2. The right intermediate bronchus was completely mobilized and the bronchial resection extended from the right main bronchus at carinal level to the orifice of graft bronchus. Frozen section of mediastinal lymph nodes and resection margins showed negative results. We therefore decided to perform right basal-segment and right lower lobe autotransplantation in Case 1 and Case 2, respectively.

In the reconstruction of airway, end-to-side anastomosis to the trachea was applied in both cases instead of end-to-end anastomosis to the right main bronchial stump. Lateral tracheal fenestration was performed above the level of carina. The tracheal opening was at least 1–1.5 cm2 in size and created entirely on the cartilaginous wall or partly including the edge between cartilaginous and membranous wall (6,7). The anastomosis between graft bronchus and lateral wall of trachea was started using parachute principle. A double-ended 3-0 Prolene was inserted from the cartilage wall of graft bronchus. The continuous sutures were firstly placed on the circumscribe of cartilage and tightened to turn the airway mucosa inward using nerve hooks. The remaining circumscribe of the membranous wall was sutured subsequently with the same suture to allow adjustment of anastomosis to avoid imbalance or excessive traction. The knots were tied on the outside of the airway (6). The anastomosis was then tested for air leaks up to 35 mmHg pressure. The anastomosis was finally covered with mediastinal pleural tissue circumferentially. The vessels and airway reconstruction procedures were diagrammatically demonstrated in Figures 2,3 and Video 1. 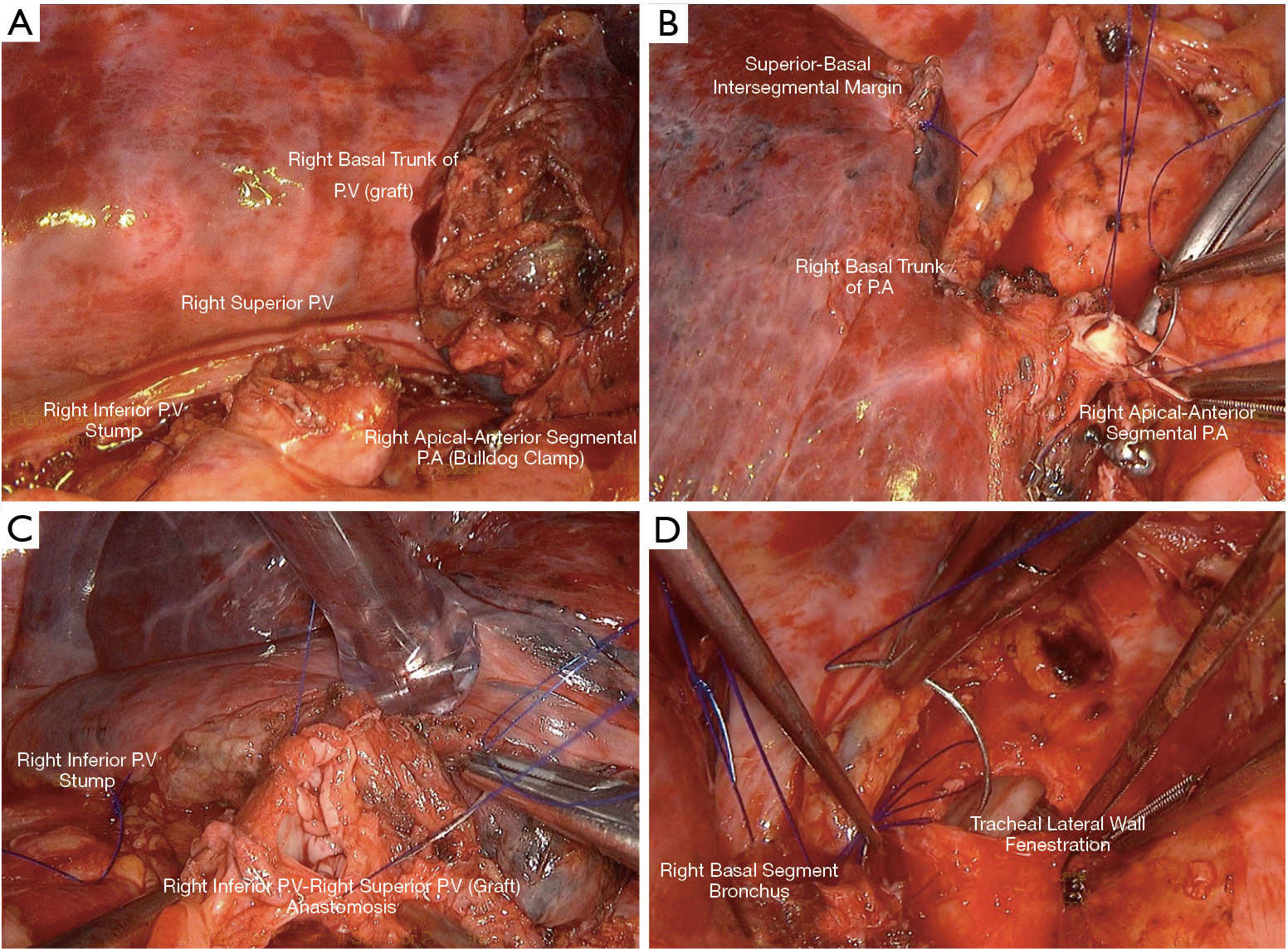 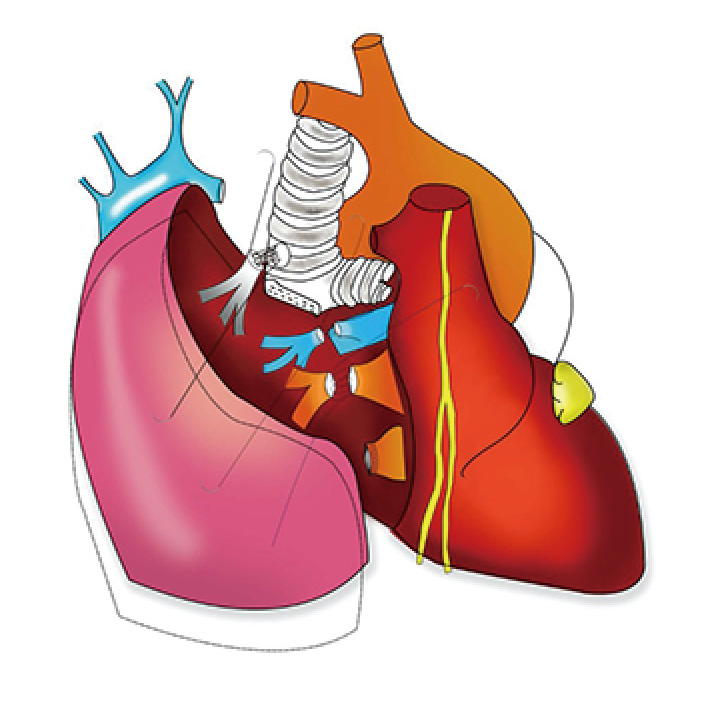 Hilar and mediastinal lymph node dissection was completed after reconstruction. Two chest tubes were inserted. The blood loss of Case 1 was 800 mL and the operation time was 358 minutes. They were 200 mL and 280 minutes in Case 2.

Patient 1 was mechanically ventilated through endotracheal intubation on the first 2 postoperative days. Patient 2 was successfully extubated in the PACU after surgery. Both patients were closely monitored in the ICU. Prophylactic antibiotic and analgesics (remifentanil 0.03–0.01 µg/kg/min) were administered. Patients were not encouraged to cough in the first 3 days after operation. Bronchoscopy was performed daily to evaluate the anastomosis and remove secretion. Patients were transferred to normal wards when stable.

Patient 1 was extubated on POD 2. Although bloody intratracheal secretion and sputum were observed after administration of LMWH for DVT prophylaxis, they gradually disappeared after discontinuing the anti-coagulation. He was transferred to normal ward on POD 4. Chest tubes were removed on POD 5 and 7 and he was discharged on POD 11. CXR before discharge indicated the graft was well-inflated without pleural effusion or pneumothorax.

Patient 2 was extubated in the post-anesthetic recovery room and given nasal cannula oxygen supply (1–2 L/min) in ICU. She was also administered LMWH for DVT prophylaxis. This resulted in increasing bloody drainage from the chest tubes and gradually lowering Hb which improved after discontinuing the LMWH and giving200 mL blood transfusion. She was transferred to normal ward on POD 4. Chest tubes were removed on POD 3 and 7 and she was discharged on POD 10. CXR before discharge showed no pleural effusion or pneumothorax.

Both cases underwent bronchoscopy before discharge. No anastomotic ischemia, tissue necrosis or dehiscence, was observed.

Both patients underwent chest CT scan every 2 months and bronchoscopy every 3 months. Both patients complained of mild cough without any interference on their daily life at the first month follow-up. It could be alleviated by medications. No shortness of breath, chest pain, severe irritative cough or stridor was reported. Bronchoscopy showed no anastomotic stenosis or tumor recurrence at 9-month follow-up (Figure 4). 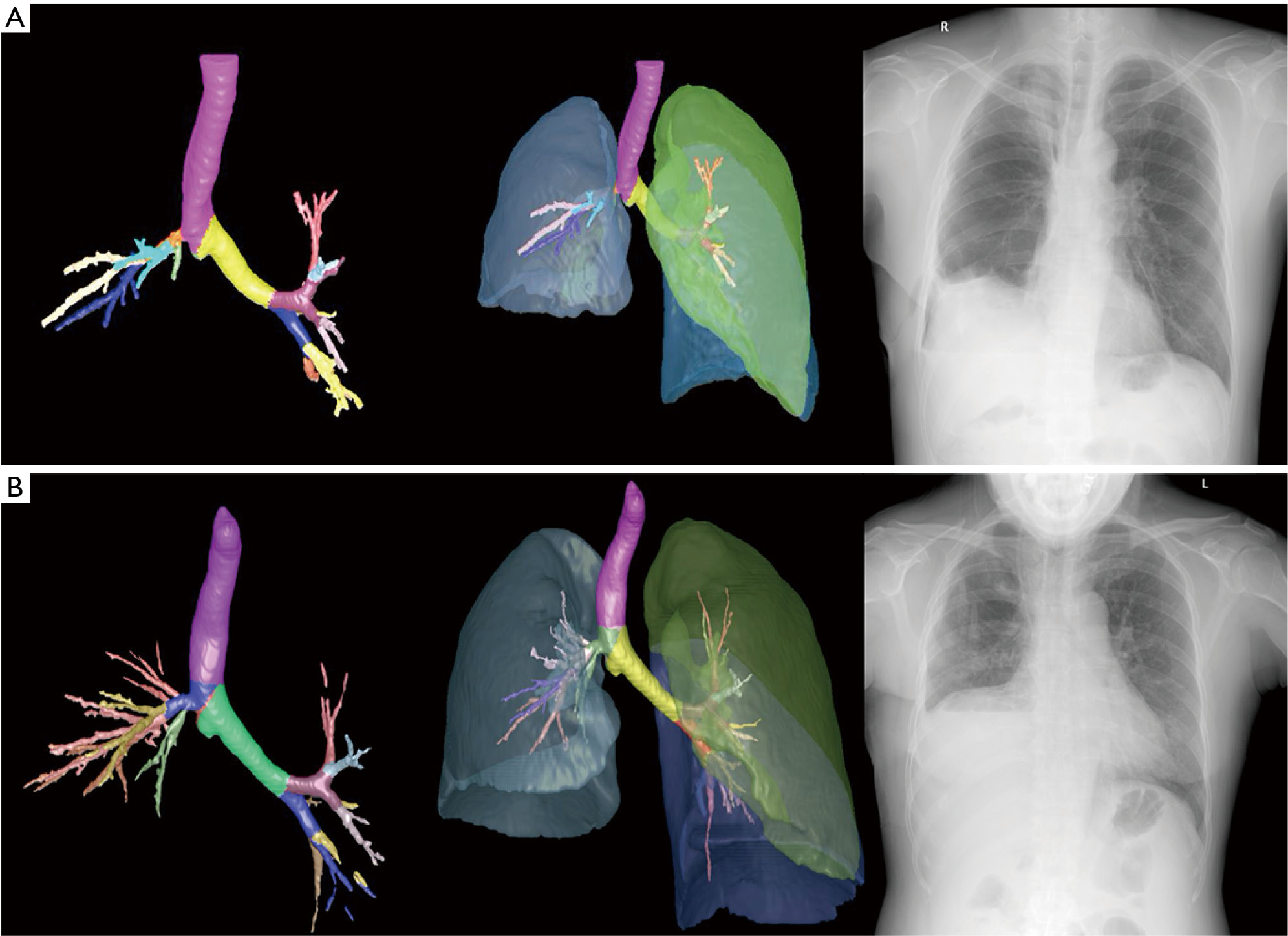 The authors present the following article in accordance with the reporting checklist. All procedures performed in studies involving human participants were in accordance with the ethical standards of the institutional and/or national research committee(s) and with the Helsinki Declaration (as revised in 2013). Written informed consent was obtained from the patient.

Lung cancer is the leading cause of cancer-related death in many countries. Unless there is distant metastasis, both early and locally advanced NSCLC could benefit from surgical resection in terms of oncological outcomes. However, central NSCLC are complicated and increase the difficulty of surgical treatment, especially when there is invasion of pulmonary vessels and/or main bronchus. Sleeve or double sleeve resections have become the primary choice of most thoracic surgeons to avoid pneumonectomy (8-11). But the limited length of the inferior pulmonary vein may jeopardize the anastomosis of pulmonary artery and/or bronchus. Pneumonectomy may be the only radical choice for these patients. However, its mortality was reported to be 4.9–8.0% (12-18). Significant loss of functional lung tissue might lead to poor quality of life. These conditions markedly limit the opportunity of patients who have compromised lung function. Lung autotransplantation may offer a suitable and feasible choice to achieve complete resection and functional lung tissue preservation. The most reported cases of lung autotransplantation are lower lobe or segments. When inferior pulmonary vein limited tension-free anastomosis of both bronchus and pulmonary artery anastomosis, reconnection of graft inferior pulmonary vein to the superior pulmonary venous stump is a feasible choice.

Two methods of lung autotransplantation have been reported which are ex situ and in situ. Some medical teams showed cases of local advanced lung cancer treating with en bloc pneumonectomy followed by ex situ separation of basal segment and perfusion with chilled glucose low-potassium dextran solution or UW solution (4,5,19). They believed this method is easier (2,5) and also reported that other surgeons could simultaneously finish the lymphadenectomy while the primary team was doing ex situ graft separation and perfusion on the back table and this would shorten the operation time (3). Some researchers reported cases of lung autotransplantation using in situ plastic reconstruction of bronchus, pulmonary artery, and pulmonary vein with satisfactory postoperative outcomes (20-22). They stated that it could shorten warm ischemic time since the graft was not prepared on the back table. In these cases, pneumonectomy was not performed but lobectomy with or without segmentectomy and subsequently followed by reconstruction.

There is still no consensus on whether graft perfusion is essential in both procedures. Oto et al. indicated that lung preservation with at least 2L of cold low-potassium phosphate-buffered solution was recommended when warm ischemic time exceeded one hour (23). We chose in situ method without graft perfusion when the following criteria were met: (I) the tumor could be resected and removed separately from the graft; (II) no complicated plastic reconstruction of the graft is needed; (III) reconstruction of vessels could be completed within 2 hours (24). We observed no ischemia/reperfusion-related short-term or long-term postoperative complication in either case.

Additionally, it was reported that advancing the intermediate bronchus to the level of trachea for anastomosis can lead to airway necrosis and narrowing caused by anastomotic angulation, devascularization, and tension (26). Nevertheless, end-to-side anastomosis could be completed without excessive tracheal releasing maneuvers as end-to-end anastomosis, and might have less risk to impair tracheobronchial blood flow. Although end-to-side anastomosis to the contralateral main bronchus can be also considered as an alternative method, it might be more technically demanding and difficult because the anastomosis must be performed deeply among mediastinal structures such as the esophagus and pericardium (6,27). We therefore chose the trachea instead of the contralateral main bronchus to reconnect the graft bronchus. No tumor recurrence or anastomotic stenosis was observed during the 9-month postoperative follow-up. Postoperative anti-coagulation is critical to prevent DVT and pulmonary embolism. However, secondary bleeding may happen while using anti-coagulation medications.

In summary, we reported two cases of central NSCLC which were successfully treated with the novel lung autotransplantation technique. We used end-to-side graft bronchus to trachea anastomosis and in situ method to simplify the reconstruction. This technique might be easier and less time-consuming than the ex situ method. Neither short-term nor intermediate-term postoperative complication or recurrence was observed. Further study is warranted to elucidate the long-term survival and oncological outcomes of lung autotransplantation.

Reporting Checklist: The authors have completed the CARE reporting checklist. Available at http://dx.doi.org/10.21037/tlcr-20-1242

Conflicts of Interest: All authors have completed the ICMJE uniform disclosure form (available at http://dx.doi.org/10.21037/tlcr-20-1242). The authors have no conflicts of interest to declare.

Ethical Statement: The authors are accountable for all aspects of the work in ensuring that questions related to the accuracy or integrity of any part of the work are appropriately investigated and resolved. The authors present the following article in accordance with the reporting checklist. All procedures performed in studies involving human participants were in accordance with the ethical standards of the institutional and/or national research committee(s) and with the Helsinki Declaration (as revised in 2013). Written informed consent was obtained from the patient.