Thermal ablation is the use of extreme temperature to cause tumour destruction. Currently, thermal ablative techniques are delivered percutaneously and are used in patients with stage 1 non-small cell lung cancer (NSCLC) where surgical resection or radiotherapy are not feasible (1,2). Small clinical studies have shown that thermal ablation using modalities such as cryoablation and radiofrequency ablation (RFA) can induce an anti-cancer immune response in several malignancies, including NSCLC (3). In a study of colorectal cancer this included upregulation of programme cell death 1 (PD-1) and its ligand programme cell death ligand 1 (PD-L1) expression with thermal ablation (4).

The PD-1/PD-L1 pathway is a checkpoint in T cell homeostasis and, when activated, has a negative regulatory effect that leads to attenuation and exhaustion of T cell function and thus reduces the anti-cancer immune effect (5). This checkpoint is a common target for current checkpoint inhibitor immunotherapy in NSCLC where PD-L1 expression is used clinically as a predictor of response (6). Anti-PD-L1 immunotherapy has revolutionised the treatment of metastatic NSCLC, with a significant improvement in survival observed in some patients. Unfortunately, not all patients respond to treatment and some of those that do respond will eventually develop resistance. As such, further strategies to augment the benefit of immune checkpoint inhibitor therapy are urgently needed (7,8).

Bronchoscopic thermal vapour ablation (vapour ablation) is a novel technique that is currently under development. This study reports pilot data demonstrating changes in PD-L1 expression in NSCLC and the systemic response to injury from vapour ablation.

We present the following article in accordance with the MDAR reporting checklist (available at http://dx.doi.org/10.21037/tlcr-21-76).

Patients with biopsy confirmed stage 1 NSCLC were enrolled in this prospective treat-and-resect feasibility study of a novel thermal vapour ablation catheter for bronchoscopic therapy of NSCLC. Patients underwent bronchoscopic thermal vapour ablation of tumour using the catheter, prior to surgical lobectomy for treatment of stage I NSCLC. Clinical safety and efficacy outcomes have been published (9). The study was conducted in accordance with the Declaration of Helsinki (as revised in 2013). The study was prospectively registered at clinicaltrials.gov (NCT03198468). Ethics approval was obtained through the Royal Melbourne Hospital ethics review board (HREC/17/MH/422) and all patients provided written informed consent for both bronchoscopic thermal ablation and tissue and blood collection.

Pre-ablation tissue from biopsy samples and post-ablation tissue from lung resection samples were analysed to assess the change in PD-L1 expression. Three areas within the resected sample were identified as defined with light microscopy (Figure 1). “Viable” tumour showed no effect from the ablation, with no evidence of necrosis or increase in inflammation. “Injured” tumour showed increased inflammation in the form of inflammatory cells and/or fibrinous exudate, but no definite features of necrosis in the tumour cells. Injured tumour was typically seen at the interface of viable and necrotic tumour. “Necrotic” tumour showed established necrosis with ghosted cell outlines, cytoplasmic eosinophilia, and nuclear hyperchromasia or dissolution. PD-L1 expression was assessed from areas of viable tumour and areas of injured tumour, with areas of necrotic tumour omitted for this analysis. Immunohistochemistry (IHC) was performed with Ventana PD-L1 (SP-263) primary antibody on a Ventana Benchmark Ultra automated system (Ventana/Roche, Tuscon, Arizona) using CC1 cell conditioning and Optiview detection. Further details of the IHC protocol are available on request. Analysis of PD-L1 tumour proportion score (TPS) was performed by a pathologist experienced in clinical testing (10). TPS was determined separately for viable tumour and injured tumour in the post-ablation specimens. 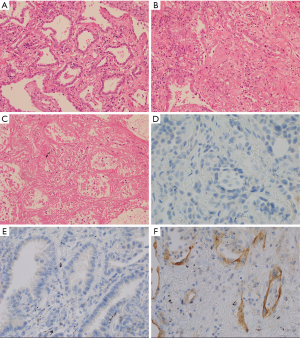 Figure 1 Cellular changes with thermal ablation. Representative histologic findings (haematoxylin and eosin ×20) from Patient 3 demonstrating “viable” tumour (A) showed no effect from the ablation, with no evidence of necrosis or increase in inflammation. “Injured” tumour (B) showed increased inflammation in the form of inflammatory cells and/or fibrinous exudate, but no definite features of necrosis in the tumour cells. Injured tumour was typically seen at the interface of viable and necrotic tumour. “Necrotic” tumour (C) showed established necrosis with ghosted cell outlines, cytoplasmic eosinophilia, and nuclear hyperchromasia or dissolution. For Patient 5, PD-L1 tumour proportion score (TPS) was zero at baseline (D). Post ablation PD-L1 TPS was 5% in “viable” tumour (E) and 20% in “injured” tumour (F).

PD-L1 TPS was zero in tumour cells in all samples prior to vapour ablation. Post-ablation, three patients demonstrated an increase in PD-L1 expression in their resection specimens in areas of injured tumour. PD-L1 TPS in areas of injured tumour in these three patients were 50%, 40% and 20% (Figure 2A). In one of these patients (Patient 5) PD-L1 TPS in viable tumour had increased to 5% as well. The remainder demonstrated no change in PD-L1 expression (TPS =0%) in viable tumour.

This has important implications that need to be explored further. The observed change may reflect an immunogenic response, where an increase in PD-L1 expression may be the result of an adaptive anti-cancer immune response that is driven by interferon-γ (IFN-γ). Conversely, an increase in PD-L1 expression on its own may represent an unfavourable (immunosenescent) effect on the anti-tumour immune response as activation of the PD-1/PD-L1 pathway leads to T cell suppression and attenuation (5).

PD-L1 expression has been shown to increase in tumour cells as a response to elevated IFN-γ levels (5). IFN-γ is a pro-inflammatory cytokine that stimulates a T helper 1 (Th1) adaptive immune response. This type of response has been seen in patients with liver cancer who have undergone RFA, where elevated IFN-γ levels and an increase in tumour T cell infiltration has been seen post-ablation (11). If this mechanism applies to this cohort of patients, then it would suggest that a Th1 adaptive immune response has been triggered by thermal vapour ablation.

Increase in PD-L1/PD-1 expression has been described post chemotherapy and radiotherapy in patients with NSCLC. In these studies, this increase was associated with increase in tumour infiltrating lymphocytes and tumour mutational burden, implying improved efficacy of subsequent immunotherapy (12-14). In colorectal cancer a similar increase in PD-L1 expression has been seen following RFA (4). Additionally, increased PD-1 expression on tumour infiltrating CD4+ and CD8+ T cells was also observed which is suggestive of an adaptive immune response post-ablation. Furthermore, in that study, elevated PD-L1 expression was associated with an improved efficacy to an anti-PD-1 checkpoint inhibitor (4). Alterations to PD-L1/PD-1 has not previously been described post thermal ablation in NSCLC. Limited evidence has shown that RFA can have an immune-stimulatory effect on NSCLC with an increase in tumour T cell infiltration and IFN-γ secreting dendritic cells in peripheral blood described post-ablation (15). The pilot data from our study highlights that further work is needed to determine if this represents a pro-immune or immunosenescent response in NSCLC.

Numerous analytic techniques are available to elucidate the nature of immune response suggested by alteration in PD-L1 expression on injured tumour cells. Changes in the tumour microenvironment will be very important. Current evidence suggests that following ablation, increased infiltration of CD4+ and CD8+ T cells into the tumour stroma with features of T cell activation is indicative of a tumour phenotype that may be more likely to respond to immune checkpoint inhibitors (14).

Multiplex IHC (mIHC) allows for the simultaneous analysis of multiple biomarkers on a single tissue section (16). This allows for detailed analysis of multiple cell lines including T cell subsets and antigen presenting cells. mIHC would provide data regarding both immune cell numbers and also cell location in relation to the tumour. This is important as immune cell location has been shown to be a significant determinant of response to immunotherapy (14). In addition, biomarkers assessing for T-cell function such as CD28 and T-bet can be assessed with mIHC. T cell population and function can be also be assessed with single cell RNA sequencing techniques and mass cytometry (Cytof). While immune cell location cannot be determined with these methods, both techniques provide the ability to assess for a larger number of biomarkers than mIHC at present and would allow for a more robust analysis of immune cell population numbers and function (17,18).

Assessment of T cells in peripheral blood would also be useful to further characterize the reduction in lymphocyte count observed in this pilot data. This reduction may represent a trafficking of activated effector T cells to the target tissue and assessment of peripheral blood T cell populations may help elucidate this. Assessment of tumour draining lymph nodes would also be of value in this determination. Peripheral blood cytokine analysis for pro-inflammatory cytokines such as IFN-γ would further help characterise the immune response that is seen in the tumour microenvironment. In this study blood was only taken at 5 days post-ablation, while this demonstrates an early immune response, analysis at further timepoints would help delineate the duration of this possible anti-cancer immune response.

PD-L1 may be induced in patients with early-stage NSCLC following thermal vapour ablation, and extent of response does not reflect the degree of systemic inflammatory response seen. Data suggests an adaptive immune response to thermal ablation which requires further evaluation. Detailed functional immune studies are required to better understand the immune response to tumour ablation, and whether this may augment clinical responses to immune checkpoint inhibitor therapy.

Provenance and Peer Review: This article was commissioned by the editorial office, Translational Lung Cancer Research for the series “Lung cancer and the immune system”. The article has undergone external peer.

Reporting Checklist: The authors have completed the MDAR reporting checklist. Available at http://dx.doi.org/10.21037/tlcr-21-76

Conflicts of Interest: All authors have completed the ICMJE uniform disclosure form (available at http://dx.doi.org/10.21037/tlcr-21-76). The series “Lung cancer and the immune system” was commissioned by the editorial office without any funding or sponsorship. DS served as the unpaid Guest Editor of the series and serves as an unpaid editorial board member of Translational Lung Cancer Research from Sep 2019 to Sep 2021. The authors have no other conflicts of interest to declare.

Ethical Statement: The authors are accountable for all aspects of the work in ensuring that questions related to the accuracy or integrity of any part of the work are appropriately investigated and resolved. The study was conducted in accordance with the Declaration of Helsinki (as revised in 2013). The study was prospectively registered at clinical trials.gov (NCT03198468). Ethics approval was obtained through the Royal Melbourne Hospital ethics review board (HREC/17/MH/422) and all patients provided written informed consent for both bronchoscopic thermal ablation and tissue and blood collection.