Advanced non-small cell lung carcinoma (NSCLC) has a poor prognosis, with a 5-year overall survival (OS) rate of approximately 5%. Targeted therapy could contribute to improved survival for patients with actionable driver gene mutations but has no impact in driver gene-negative patients. With the application of immune checkpoint inhibitors (ICIs), the 5-year OS rate of advanced EGFR and ALK wild-type NSCLC has considerably improved. Results of a randomized phase I trial (KEYNOTE-001) suggest that pembrolizumab monotherapy provided durable antitumor activity, with a 23.2% and 15.5% increase in 5-year OS rates for treatment-naïve and previously treated advanced NSCLC patients, respectively. Furthermore, a randomized phase III trial (KEYNOTE-024) also demonstrated that the 5-year OS rate increased to 31.9% with pembrolizumab monotherapy in patients with advanced NSCLC with PD-L1 expression greater than 50%.

Oligometastasis disease, which is defined as the intermediate stage between locally advanced and widely disseminated disease, was proposed by Hellman and Weichselbaum in 1995 (1). The concept of oligometastatic lung cancer has been controversial; however, in 2019 a consensus statement was released with reference to the possibility of offering radical-intent treatment strategies. This consensus definition for oligometastatic lung cancer allowed a maximum of ﬁve metastases in up to three organs, without the presence of diffuse serosal metastases or bone marrow involvement (2). Furthermore, the incidence rate was about 4.0% for brain oligometastasis in NSCLC patients. Multimodal treatment is essential for oligometastatic lung cancer patients. A multicenter, phase II randomized study demonstrated that local consolidative therapy, in addition to systemic therapy, could significantly prolong the progression-free survival (PFS) and OS compared to systemic therapy alone (3). As a radical treatment, surgical resection is the most established local consolidative therapy, with previous studies showing that surgical therapy in oligometastatic lung cancer contributed to significantly better 5-year OS in various multimodal approaches (4). Combinations of ICI and chemotherapy may markedly increase response rate and survival which might allow oligometastatic lung cancer patients to become eligible for localized treatment modalities. Mutations of TP53 and KRAS are common in NSCLC patients, and previous study conducted the presence of TP53 and KRAS co-mutation has also been associated with response to checkpoint inhibitors. This report describes a brain oligometastatic lung cancer patient with TP53 and KRAS co-mutation who achieved a complete response after systemic immuno-chemotherapy and local surgical resection. As we known, this is the first reported case in which a brain oligometastatic NSCLC patient has achieved a complete response after immuno-chemotherapy plus local surgical resection. We present the following article in accordance with the CARE reporting checklist (available at http://dx.doi.org/10.21037/tlcr-21-380). 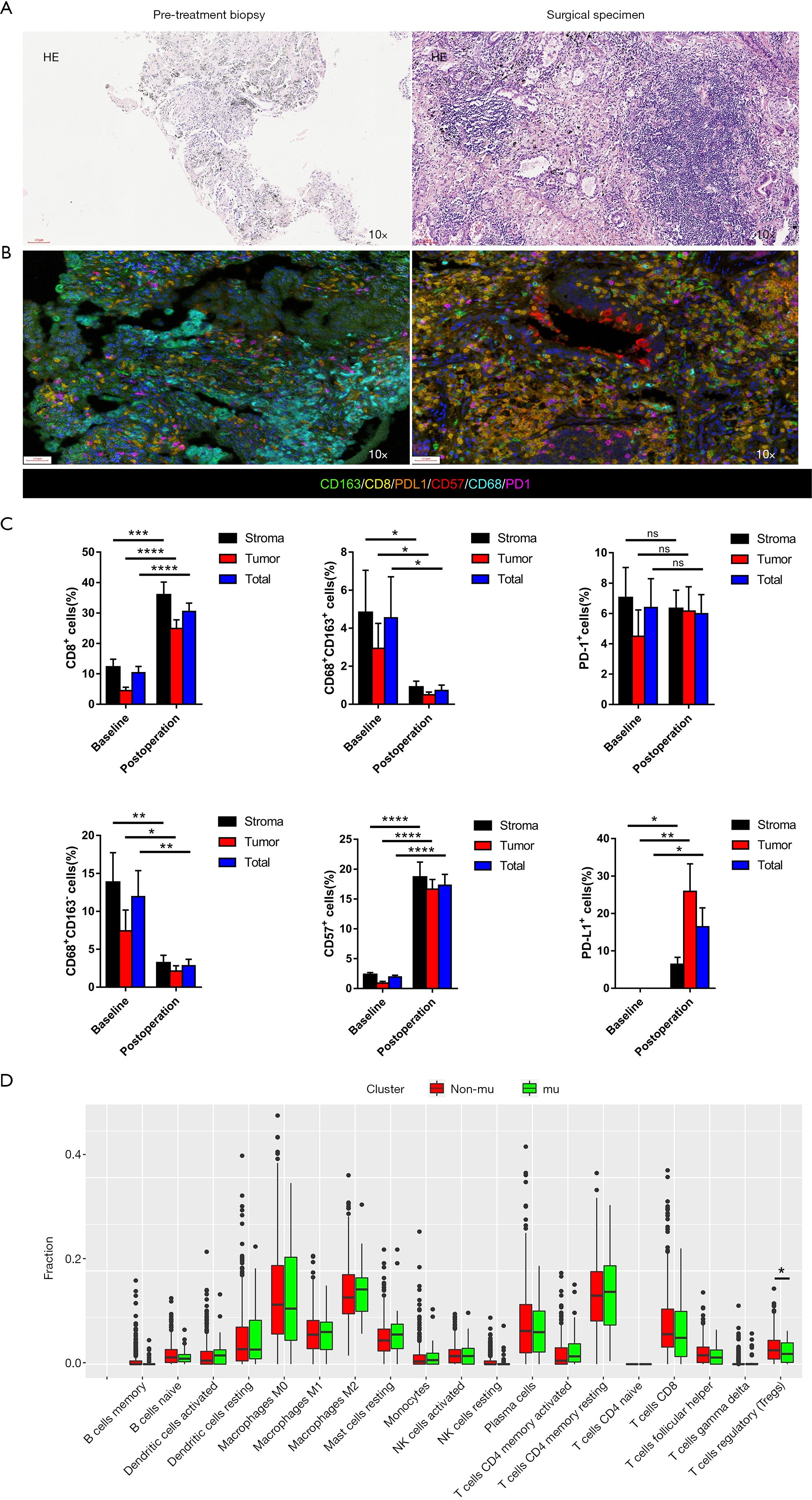 As for advanced NSCLC patients, specifically for oligometastatic NSCLC patients, systematic therapy followed with local consolidative therapy could lead to a better PFS and OS according to the previous studies. To our knowledge, this is the first case in which a brain oligometastatic NSCLC patient has achieved a complete response after immuno-chemotherapy and complete surgical resection of the lung primary. Although long-term follow-up is necessary to evaluate the therapeutic effect of this treatment strategy, the PFS has been approximately two years. Since the best response for immunotherapy is complete response, and treatment was well-tolerated, previous evidence would suggest this patient may have good long-term survival (5). We would like to highlight possible reasons in this patient for the excellent and durable response despite baseline PD-L1 expression of 0%.

Previous data has indicated that ICI activity in cancer patients is linked to the magnitude of T-cell response within the tumor microenvironment (6). Schaer et al. have also demonstrated that pemetrexed chemotherapy could promote T-cell trafficking and infiltration of the tumor, with consequent enhanced effects of cancer immunotherapy (7). However, there are few studies concerning alteration of the immune microenvironment after systemic immuno-chemotherapy. As illustrated in Figure 2B,C, PD-L1 expression was dramatically increased, along with macrophage regression in the tumor after immuno-chemotherapy. It was also found that infiltration of CD8+ and NK cells was upregulated after immuno-chemotherapy. These results suggest that the underlying mechanism for disease remission in this patient was through immune activation enhanced by pemetrexed based chemotherapy. The dynamic nature of the PD-L1 upregulation with chemotherapy shown in this patient also illustrates the poor utility of static PD-L1 expression at baseline as a sole biomarker for use of ICI, and argues for better biomarkers for selection for treatment.

In conclusion, we present a brain oligometastatic NSCLC patient with complete response after systemic immuno-chemotherapy and local surgical resection. This is a new mode of treatment for certain NSCLC patients with oligometastatic disease, which may achieve a better curative effect and survival. However, due to the complexity of the clinical diagnosis and individual difference, it is still uncertain whether this multimodality treatment regimen is suitable for all the oligometastatic NSCLC patients. Therefore, further investigation is worthwhile in this population, especially for patients with certain genetic mutations.

Funding: The present study was funded by the National Natural Science Foundation of China (No. 81772464).

Reporting Checklist: The authors have completed the CARE reporting checklist. Available at http://dx.doi.org/10.21037/tlcr-21-380

Conflicts of Interest: All authors have completed the ICMJE uniform disclosure form (available at http://dx.doi.org/10.21037/tlcr-21-380). The authors have no conflicts of interest to declare.

Ethical Statement: The authors are accountable for all aspects of the work in ensuring that questions related to the accuracy or integrity of any part of the work are appropriately investigated and resolved. This study was approved by Ethics Committee of Tianjin Medical University General Hospital. All procedures performed in studies involving human participants were in accordance with the ethical standards of the institutional and/or national research committee(s) and with the Helsinki Declaration (as revised in 2013). Written informed consent was provided by the patient for specimen collection, genetic testing, use of this information for research purposes, and publication of the case report.